does anyone know the shin tool sizes or have blueprints

Does anyone know the sizes of the shin tools, or have blueprints or dimentions. I've found sizes for the survival knife but nothing so far about the other tools. I haven't found any threads about shin tool sizes and I am hoping someone can help. I've seen fan made, resin made, actual squeegee props but nothing about dimentions or sizes. Does anyone have any info?

if you have the size of the knife, then look for the pic with all 4 tools on em, liek the one from Darth Flan. Then you can calculate the sizes of the other tools, but you only need to worry wbout the upper parts of the tools, size the rest down to the measurments of your shin pockets.

R_boba_fett said:
........ but you only need to worry wbout the upper parts of the tools, size the rest down to the measurments of your shin pockets.
Click to expand...


That's a very good point. I had never thought of it before. THANKS!

my knife is the only tool I worked out, so I can get it out the shin pocket if I have to, but it's alot longer then the real deal, my shin pockets are way to long, but it works fine like this.

Myn are actually dummys, I still need to work them out, but I had to do them for the Line-up, theyre just 1 layer of plexi-glas dremmeled out, then sanded.

The knife is worked out though, with the top thingy attatched and it has the knife curves on it, aswell as a sharp razor (sharp I mean that it has a triangular form, it's not a tool that can actually cut anything, otherwise it would be logical to be banned from conventions, not to mention it would destroy my jumpsuit) and some wooden dowels in an aluminium strap around the plexi-glas formed the other tool. I don't have the Jet Pack adjustment tool though, but that's ok, maybe a large bolt will do that trick... better then empty shin pockets this way, allthough far from perfect... 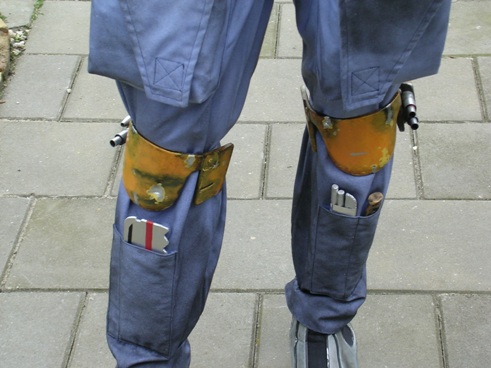 Hey JVader...
Try this link to WOF's templates of the shin tools, very easy to use?!
http://home.comcast.net/~wizardofflight/shin_tools.pdf

You might also try http://www.thedentedhelmet.com/bbt/sbw.htm The "knife" is a Paterson stir stick. If you do a search for Paterson, you will find all sorts of stuff.

Has WOF done drawings for these yet?
M

Hey FH, yeah just look at the link and there should be some PDF files to download? I have them and they are very easy to make.. hope that helps
-Gavin-
M

MOJO-FETT said:
Hey FH, yeah just look at the link and there should be some PDF files to download? I have them and they are very easy to make.. hope that helps
-Gavin-
Click to expand...

The requested page does not exist on this server. The URL you typed or followed is either outdated or inaccurate.

I tried your link and got them though. Thanks for posting an alternate link since the original seems to be dead.
M

No worries... any time.
Alan's templates are the best for Fett fans that tend to make their own kit..

There is something wrong with the link listed above for the shin tool temolates. Thank you MOJO-Fett for uploading them to the Dent.

This link should also work. It looks a the upper case letters messed with the original link.

I used WOF's templates for my shin tools. They're right on and fit perfectly in the shin pockets on my SGB jumpsuit.

You guys realise this thread is over 2 years old right?

You realize that you spelled realize wrong right?

GCNgamer128 said:
You guys realise this thread is over 2 years old right?
Click to expand...

bearden521 said:
You realize that you spelled realize wrong right?
Click to expand...

Do you realise that realise is spelled realise in the homeland of Canada?