Clamps for ESB Fett Rifle... What do you think?? (pic)

I posted this on the RPF as well to broaden the replay as to what everyone thought. These are a pair of old stock Studebaker supercharger hose clamps. What do you guys think?? Close at all??

looks good...where and how much?

Looks good to me, too. Almost all of the clamps I've found for this project usually ended up having some sort of cut slots or grooves along the length of the band (a far cry from being accurate). It's good that these don't. Nice find!

those are what I'm finding as well WPK. What do you think of the fit higher up on the barrel though? Nobody has a good shot of the 'back' clamp and I always thought it looked funny being so spread apart. It almost makes me think they could have (or should have) used two different size clamps for front and back. I hope this makes some sense... it is late!

I hit you back over there to man! But to some it up, I just won these and am waiting for them now. I will know a little more once I get them as to how they seem...

I too think they are some sort of hose clamp, but with a center groove cut out like Nerf Herder mentioned. Maybe not from Studebaker, but more likely from some Euro car, possibly that of whatever car the wiper blades came from that are used on the lightsaber handles. I just can't remember what type of car that was at the moment.

Well right now I'm going for broke on this thing. BOBA NEEDS HIS RIFLE DAMNIT! Its OK to take some chances here because I don't mind upgrading the rifle as long as its not the whole display!!


Well Paid Killer wrote:
I posted this on the RPF as well to broaden the replay as to what everyone thought. These are a pair of old stock Studebaker supercharger hose clamps. What do you guys think?? Close at all??

A while back, I managed to find some clamps which I believe are the type that were originally used, but so far I have been unable to get them in the correct diameters. 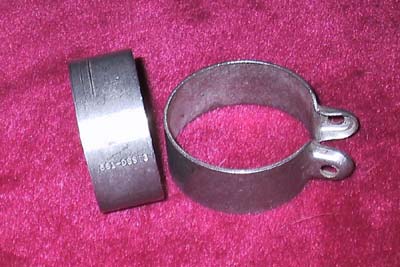 They match perfectly with the hi-res images that I have analyzed and produce the same "trick of the light" effects which appear in other photos.

These clamps are stainless steel and marked with a number "561-DSS13". They were reportedly used on aircraft exhausts. I was told by the seller that they were from a Cessna, but on asking around in Cessna user groups, this doesn't appear to be the case.

There are some good alternatives made for Harley Davidson exhausts. They don't have the same embossed pattern on the tabs as the aircraft ones, but otherwise they looks pretty good.

Excellent news Steve!! So is it safe to go looking after Harley exhaust clamps and coming up with these type clamps? I remembered you finding a near perfect match,but forgot that it was the size difference that had you still searching.

Seeing how everything else is from UK source what about Norton exhaust clamps?

Yesterday at 12:54 AM
shaunsheep
S

Yesterday at 12:54 AM
shaunsheep
S