So I want you all to take a moment with me and think a little bit different about the way we've all been approaching attaching the armor to the vest. I know there's been about a half a dozen ways to do this, but I've always thought that there has to be another way that might be a little easier and less time consuming...so of course I thought - MAGNETS
I know, I know you're probably thinking "How in the heck can you make that work?" Well, let me now show you
I went online and found some really strong (probably even too strong) magnets that will fit right inside the armor.
(Here are the two websites I use mainly, but I'm sure there are a lot others -
http://apexmagnets.com/ and http://www.magnet4less.com/)
These are 12-16 pounders if I remember correctly, but after doing this I can honestly say that you'll easily get away with using 5-7 pounders if you decide to go this route...

After that, I attached 5 to each chest plate and 6 to the ab....with the corresponding pieces, that comes to a total of 22 magnets!
I used some trusty Devcon plastic welder and they're not comin' off! (or your adhesive of choice)

Sanded down the areas first of course

After that was done, all I had to do was line it up on the vest and throw the magnets on the back of it. The best part is that if it's not lined up, you can just move them around a little to exactly where you need them and you're not having to mangle the vest or sew anything or punch holes or anything! (vest courtesy of LSFU). Also, if you want to wash your vest, you just need to take them off. Now there is one catch though, I won't be able to do the collar this way because of the way it likes to pull back towards your throat and the magnets won't prevent that, they'll just slide (note - I haven't actually tried that with magnets, just assuming here)...that piece will have to be done with either snaps or, in this case, I'll be doing mine with bolts. Pics below

I did run into some issues with the magnets that I didn't think through enough (which is why I'm showing you here so you don't have the same problem) but I got that part figured out. They were actually SO strong that they were pulling the armor over itself. I thought I was really screwed until I came up with a rather simple solution...just cut out some pieces of thin metal to stabilize the magnets between the plates and keep them from grabbing onto each other.

Now for the pros and cons of doing it this way -
The bad news, these were EXPENSIVE, running me right around just under $100 with shipping (Note - you can probably save quite a few bucks by going with a lower pull strength as magnets seemed to be priced depending on that. I went overkill on these pull strengths (10lbs). 5-7lbs [and 2-4 for the diamond] in smaller sizes should be more than enough to hold the armor on the vest)
The good news, you will only ever do this one time and they won't EVER wear out and you won't have to do anything to the vest itself, keeping it in better shape for a longer period of time. Plus it took me only about 20 minutes to do this.
Last edited by a moderator: Aug 20, 2013

temporarily stickied till I create a new link thread with all kinds of DIY stuff....thanks Will for doing this write up. Ive got a lot of stuff to link this being on the list....
R

Anytime Dom, glad to be able to help out. Great idea you got there, run with it.
S

Also tried out this magnet method and it works out pretty well. Pretty quick and easy and no risk damaging your vest . Nice to be able to adjust your armor appropriately too. How did the magnets workout for you on your shoulder bells? Did they stay in place or kind of slide around?
R

That's how I did mine. They hold up very well. 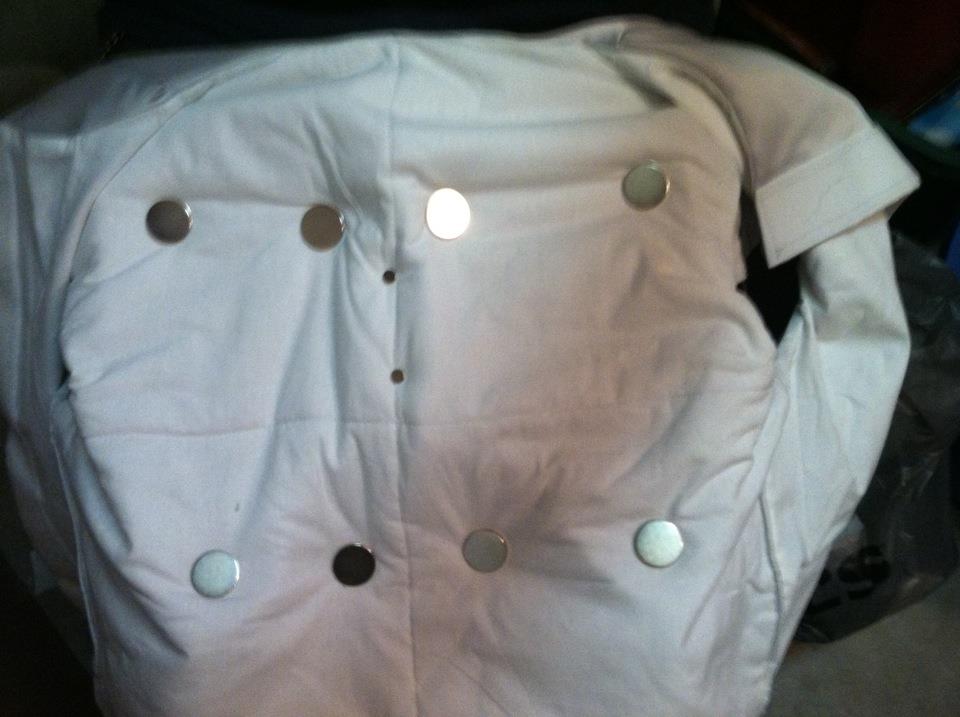 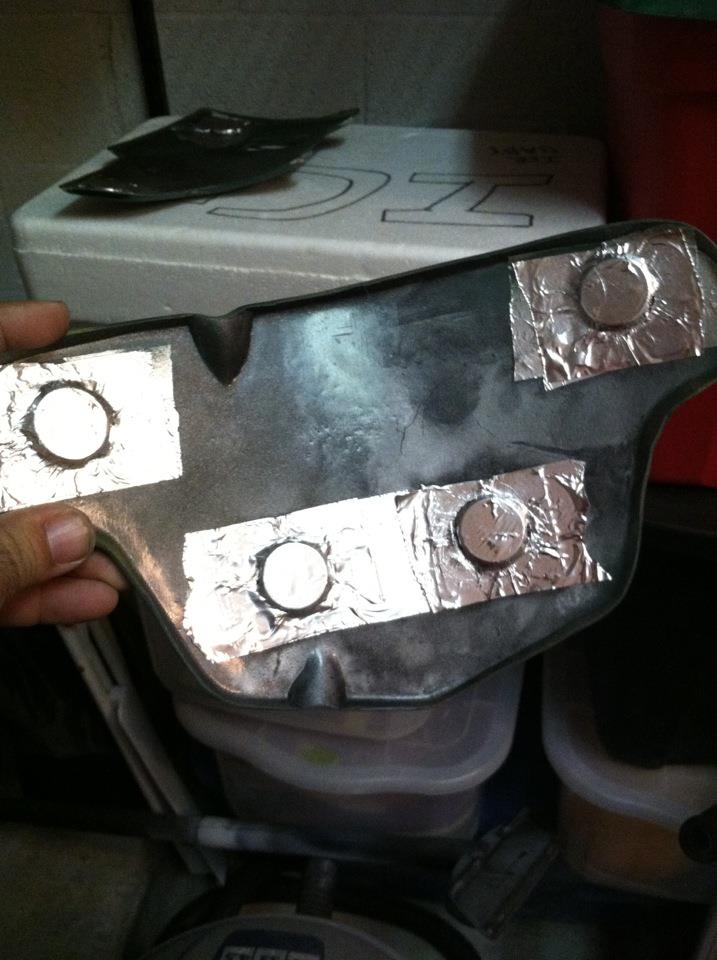 sleepalot said:
Also tried out this magnet method and it works out pretty well. Pretty quick and easy and no risk damaging your vest . Nice to be able to adjust your armor appropriately too. How did the magnets workout for you on your shoulder bells? Did they stay in place or kind of slide around?
Click to expand...

I actually never got around to doing magnets on my bells, those are still velcro'd on...never really have any trouble with those so I never bothered. I may do that eventually down the road though, not a bad idea

Would the magnets have any effect on the chest display? Magnets and electronics don't normally go hand in hand...
R

DeathProof said:
Would the magnets have any effect on the chest display? Magnets and electronics don't normally go hand in hand...
Click to expand...

I haven't had any issues at all... just keep them far away enough and you should be fine.

no issues with a magnet near the chest display....

I've had mine like this since day one in September of 2010. I used hot glue to hold the magnets in place on the inside of the vest so I always had the right alignment. After 104 Fett troops I have only had the magnets fall off a couple of times, mostly cause the vest caught itself. The only other issue is since I sweat a lot and I have got caught in rain before I have some rust stains on the outside of the vest. Hey, weathering, right?
D

Sent from the moon using only the power of my mind

I went to Joann Fabrics and found these nice magnets that were 4 for $4. They were like nickel shaped neodymium ones too. I used 26 magnets on the vest and 28 on the plates. On the bottom of my shoulder bells, I added a single one and have my wife stick a loose magnet under my outer second sleeve on the flightsuit. It keeps my shoulder bells from flaring out.
I used velcro on my vest and collar to hold that in place...but I have a strange setup where my back and collar are attached permanently and my harness is permanently on my backplate. Somehow it works and I don't choke to death. It's nice cause I can get myself dressed.
R

Danabanana said:
Hey, where did you get these magnets please? What is N42, is that strong enough :-/ I can find plenty of N35 or N42 strength...?
Click to expand...

Dana,
I updated the first post with 2 website links
I couldn't tell you what N35 or N42 is, but I would recommend 5-7lbs pull strength for the chest armor and shoulder bells.
D

Sent from the moon using only the power of my mind

gymbeau2000 said:
but I have a strange setup where my back and collar are attached permanently and my harness is permanently on my backplate. Somehow it works and I don't choke to death. It's nice cause I can get myself dressed.
Click to expand...

This sounds interesting. I always like hearing of different people's approaches to costume comfort. Any pics of this setup?
M

This is a good idea. I actually have access to old HDD magnets, but they're probably TOO strong for this...I'll look into the sites you suggested.

$100 for something this brilliant! Takes away aloe of errors and possible error too. Absolutely the thread I needed to find

Thanks so much. This is brilliant. I was concerned about making holes in my vest and getting everything lined up using bolts. This seems way easier and I like how I'll be able to adjust as needed. I'll be using this method when my armour arrives.
You must log in or register to reply here.
Share:
Facebook Twitter Reddit Pinterest Tumblr WhatsApp Email Link