for those of you who are fairly new like me I just warn you about a seller on ebay known as Frank-N-Son2. I bought a pair of gauntlets from him and this is how the showed up. ( Haven't posted a picture before, hopefully I did this right ) 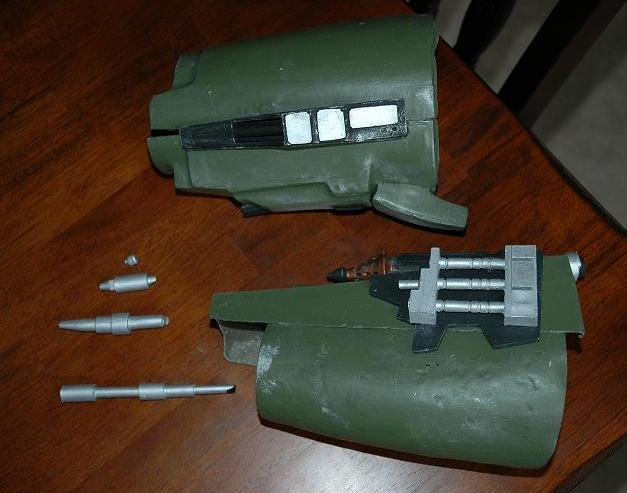 Looks like maybe just a packing error? Or maybe he did pack it well but the postal/ups/fedex service dropped it really hard?

Before you shun him in the community...why don't you inform him of the damage during shipping and see what he says?
S

I've done so (and in all fairness he has not had time to respond yet) However, I'm not the only one that has reported issues. I just realized I got the name a bit wrong. It's Frank-N-Son-Part2. If you do a search for F-N-S you'll find another report. From what I understand this person was banned from here for being a recaster. I bought these in Feb right before I joined up and would not have if I had seen any of the posts on this forum. Just wanted to add a new post for anyone new post for other new guys like myself. I have no idea what the resolution is going to be on this, but I'll post a positive one if it happens. Just wanted to give a warning about purchasing things on ebay. It's a much better idea to buy things from other members here

JoNich said:
Before you shun him in the community...
Click to expand...

Yeah, I blieve he recasts ruffkin's gauntlets. I almost bought from him, luckily at that time when the auction was over, he told me paypal had seized up his account and I wasn't able to pay for them. Lucky me.

You can fix those
S

Well he responded to me fairly quickly and is sending me a replacement part. So he is trying to make it better. However, I've already contacted Rufikin and ordered a set of his gauntlets. I'll most likely fix these, clean them up a bit, and resell them.

Help me Ruffkin, you're my only hope!

That Bites because I'm having a problem with ECD Studios.Order from him on Ebay for a Double set of armor stickers for ESB,and ROTJ. Ive contacted through Email and got his phone number.No response from him its been almost for weeks. I'm new also but I hate to get stiffed! 15 bucks is 15 bucks!

EDC Studios is bad news as well. I've read tons of bad stuff about that site over on RPF.


I highly recommend NOT ordering ANYTHING from "EDC Studios"
E

Boy, I hate it when I see this happen. Sadly it happens way to often. Why people are still buying from Bloodsports is beyond me??? I peek at there ebay feedback every once in a while just to see if there buyers feedback will ever truly reflect there products. Sadly it dosnt and the funny thing is they allways keep the auctions private if they have to do with a fett prop. I was tempted once to buy a cheap item just to throw some neg feedback but felt that wasnt fair and I didnt want to give them a dime. Perhaps one day recasting will become more rare, but not any time soon.
G

Does bloodsport recast a lot of stuff? I've checked out their site, got some useful info but I find their stuff to be way overpriced

Yes bloodsport is a recaster and banned member from here
E

Bloodsport is the poster child for recasting
M

Is there a list of recasters available to those who are not aware? I believe that would be helpful so those new to collecting pieces to create their Fett costumes don't throw money at those who recast thus providing them the means to perpetuate it. I'm sure it would be a bit controversial in some aspects. Just wondering.
Last edited by a moderator: Apr 13, 2006
S

Oh, thats too bad - sorry to hear that they came broken!
C

MacRory said:
Is there a list of recasters available to those who are not aware? I believe that would be helpful so those new to collecting pieces to create their Fett costumes don't throw money at those who recast thus providing them the means to perpetuate it. I'm sure it would be a bit controversial in some aspects. Just wondering.
Click to expand...

That is actually a really good idea. I like the sound of that. I got screwed on ebay once also...a $165.00 recast mystery helmet that was constructed horribly. I have to admit, I HAVE purchased something from bloodsport, even after i joined this forum, I ordered was collar studs, I won an auction of his on ebay for $0.99. I have to admit, they weren't bad or anthing. (But how can someone mess up collar studs?). So that isn't much to say about him. Just never buy from him.

Oh, and we should star that list that MacRory suggested. I think that'd be a wise move. Or, just make a Sticky Thread where everyone lists evil Ebay sellers.

And about those gauntlets, I'd just get them repainted and re-worked. The shape looks okay, but the paintjob looks as though it was painted with finger-paint. Cheers!
M

I've definitely learned something from this thread. And thanks to Batninja for the link to where a "good list" was talked about.
Last edited by a moderator: Apr 13, 2006

Everyone please beware of FETTDAD!

Everyone please beware of FETTDAD!