First off, I'm not applying for the 501st, and I'd rather my costume be comfortable than accurate (which is why I believe I'll always use a modified t-shirt instead of flak vest, and usually leave off the hoses on the gaunts). With that in mind, I've got some ideas to share on guantlet darts...

My first set of gauntlets (the first thing I worked on for my Fett after buying an awful Rubies bucket) had 3 screw on spikes in place of the darts. I took these off of my high-school backpack which had been used storing spray paint cans for the last 12 years. Ah, to be punk in the late 90's... Anyway, these look neat, but are nowhere close to accurate. They're be great on a Mandalorian. I don't recall where I got em in 1998, but you can probably still buy them from a website like Hot Topic. I should probably use these for toe spikes, although I've been putting off adding toe spikes cuz I feel they might intrude on the comfort of wearing the costume because I'd constantly have to be aware of em to not stab anything accidentally.

I'm rebuilding the gauntlets now (you can see why in the pics: inexperienced builder with plaster on cardboard and forsale signs is not a good look), using purchased vac-formed tops and sintra clamshells and I'm thinking about what to use for darts this time around. It happens that I'm still punk enough to have some bad instrument cables lying around and I'm thinking about just cutting the 1/4" jacks off of 3 or 4 of those. They're about double the width of the accurate darts, but the shape is right. What do you guys think?

P.S. That's a Lobot headset in the background that I'm hoping to finish for my bald friend before Dragon*Con

I'm honestly not a big fan, but then again screen accuracy is my thing. I too have plenty extra of those spikes laying around from the days when I didn't give a **** how hot it was, I was going to wear my studded leather. I remember an old thread where someone used unpunched rivets and they looked **** close to me. Sadly, I didn't bookmark it and can't find it for the life of me.

Any thoughts on the 1/4" instrument plugs?

I'm in the same boat as apolifka. I'm all about the super-accurate. I really want to upgrade my machined aluminum replicas with
real ones some day.

Back in the old days we used Bic pens.

apolifka said:
I too have plenty extra of those spikes laying around from the days when I didn't give a **** how hot it was, I was going to wear my studded leather.
Click to expand...

Ahhh... the days when METAL was king!
B

Fett 4 Real said:
And walked uphill in the snow both ways to school and back
Click to expand...


As for the darts its a good go , but weve long since moved on from winging it, but if they are right for you and you have the suit for fun to pull out at partys and stuff great but inall fairness a set of Mojo darts that are exact replicas are not that costly but onece you start with that you will want to upgrade the whole costume
K

You could also use minijack connectors, I'm sure they're cheap:

Thanks BG for being reasonable. The thing that kept me lurking on this board for almost a year before finally registering was the attitude so many people here have that it's either 501st approved, or it's a "Halloween costume," which is sorely looked down upon. There is some middle ground. Unless you've built a Fett yourself, or have a life-size poster in your bedroom... even the most faithful Star Wars fan is not going to notice the details that are required for 501st approval. I've worn mine twice this year (3 times if you count showing up at a friend's kid's birthday party) and always have people ask if I'm in the 501st (even with those ugly gauntlets).

I know $35 for darts isn't bad, it's just that it's such a small part of a costume I've already spent so much on. I already have 4 of these lying around, and it's not like I can't change em out later.

To KaanE, I don't think 1/8" jacks are shaped right and they seem too short. The 1/4" has that more arrow shaped look, even though they're so fat.

Dude not to be negative but you can get resin ones that are casts of actual parts then rub n buff em theyll look great, just because the stuff your using is metal doesnt make it better...the jacks are more accurate in size than u may think...the "darts" on the gaunts are the size of the ink of a pen maybe 1/8 inch in diameter

I actually used some unused pop rivets as well as some smaller studds for mine and they turned out pretty good. I will post some pics after work
K

..to and from our one-room house, which was a shoebox in the middle of the highway...

But seriously, the darts kinda look like dremel tool heads to me *lol*

made these darts from rivets and punk studs i think they came out alright. probably end up switching them out eventually though. 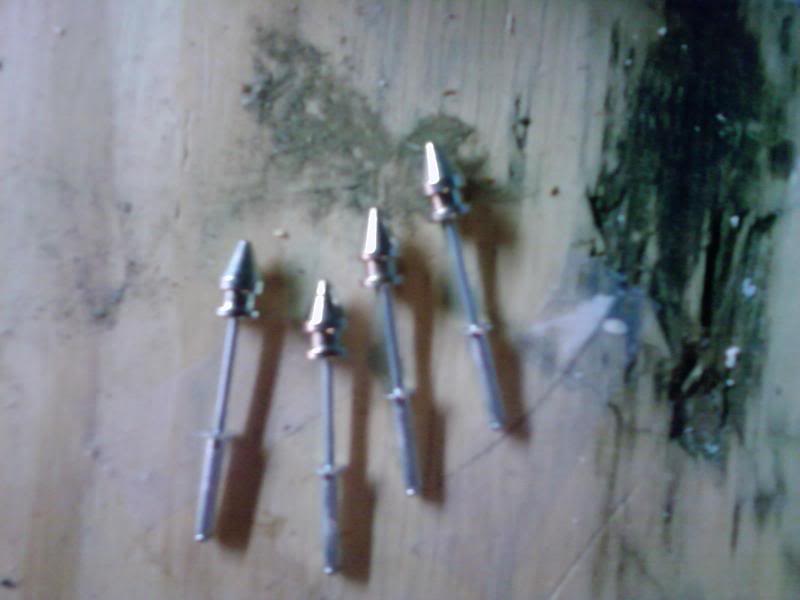 Here's my darts. They're also not genuine but they are about the right size. That is a rivet underneath to show you how they look as well. I'd go for the rivet if I were you. Not just to look screen accurate but because the audio jacks look way too big to me. 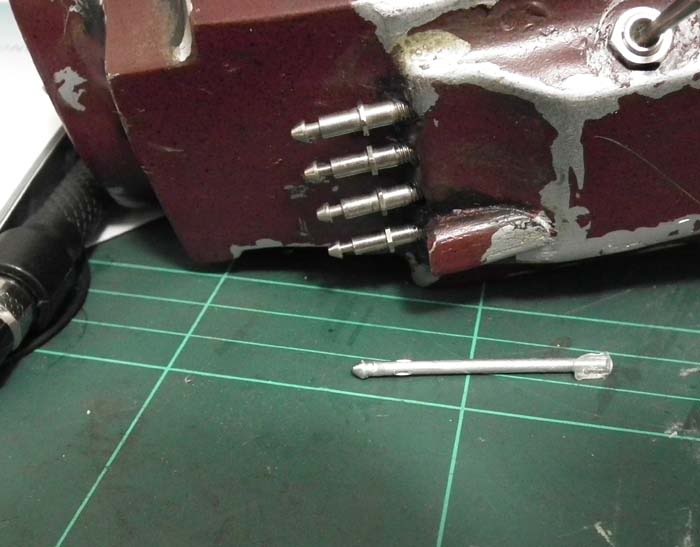 Took the outer rings off my 1/4" jacks today. I think these are gonna be as accurate as I'll ever need em to be.

First coat of alluminum is drying on the gauntlets right now. I'm gonna be so glad when I can box up my old cardboard ones permanently!

Another idea I gotta share in pictures when I finish painting... I mounted two old dremel tools inside the left gauntlet so that the shaft sticks out the side. Then I drilled matching holes in the flame thrower. Gonna hide velcro in between. I think a removable flamethrower is a great idea that I've never seen implemented here. I was so upset last year when I got to the bar on Halloween and my flamethrower caught the seatbelt and ripped halfway off.

I know what you mean negative eleven, my flamethrower is mounted using velcro as well.

I made these from nylon rivets. I put them in a drill chuck, turned it on and used a file to shape them. I may one day but nice machined ones.