the help Braks out a little bit thread

I don't know if anyone's aware, but recently Braks Buddy's pet llama (Tabitha), which has only 3 legs (actually it's more like 3.5 legs - the mini leg was due to a malformity at birth) suffered a freak prop accident. Her yard is directly adjacent to Braks' workshop-shed which until recently had not been a problem. A long story short, the pet llama is now blind. As you know, working so close to an open window, Dremel cutting blades can get away from you sometimes. Such was the case here.
Tragic? Yes.
Moronic? Probably. But who are we to judge?

Well, llama corrective ocular surgery is very expensive. Now I have a couple of Braks' famous reference cds. In fact, I had just finished browsing through one when I looked thoughtfully at that cd case for a few minutes when I had this thought, "what if i sent this cd case back to Braks?" Not only would it be helping him out, it would also be good for our planet. Recycling! So my proposal to everyone out there that has recently (or not so recently) recieved a Braks Reference CD, copy it to your harddrive, drop the cd in that little jewel case, mail it back. If enough people did that, he might be able to care for his poor legless, blind llama, and maybe other good stuff too like an endless supply of money for Braks! Put a little note in the case even, let him know how awesome you think the cd is. thank him for his efforts, not only would it help him out on fixing his half-camel-half horse illegal-exotic-mammal-pet-like thing, it would make his day a little bit better. i know it would make mine a little better.

so yeah, that's my idea. how many other people think it's a good idea?

*edit* i realize that this isn't really a feasable option for people who buy his cd, copy it and try to resell it on the black market in the Philippines, but hey, it's the thought that counts.

Think of the llamas, but think of Braks too. 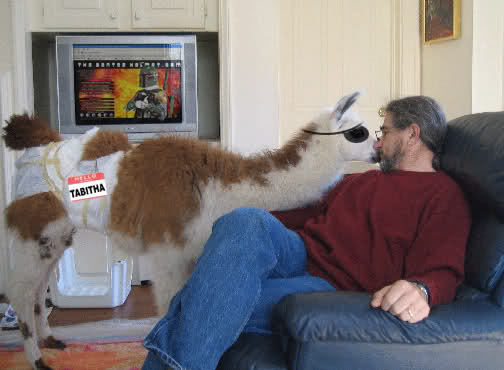 poor cute little llama, great idea with the cds, now I just need to buy 1 or 5...

Wow Braks Buddy, you've really let yourself go with the hippy hair and beard. I'll pray for you Llama.

WHO IS THAT KISSING TABITHA!?!?!?! I don't know who you are you George Lucas look-a-like-wannabe, but your days are NUMBERED!!! NO ONE KISSES TABITHA!!!

Well I think it's a great idea. Fortunately, I happen to have a giant Priority Mail box full of styrofoam peanuts that I can use to ship the cd back.
G

I think i just peed a little.

Chris- you have no idea how badly I needed a good hard laugh. Thank you!

Im so clueless? Is this for real??

obi sean kenobi said:
Im so clueless? Is this for real??
Click to expand...

Community Staff
Are you guys daring to imply that I might NOT be in financial straights due to my 3.5 legged blind llama?!? FOR SHAME!!!

There seem to be a few of these threads these days.

Brak's Buddy said:
Are you guys daring to imply that I might NOT be in financial straights due to my 3.5 legged blind llama?!? FOR SHAME!!!
Click to expand...


Well maybe we should focus more on Llama safety awareness and form a orginization so we can just complain about how others mistreat 3.5 legged llmas....

When I visited Art's château last year I witnessed true love. I was warmed by the beauty of their relationship.

Here is an intimate moment I was able to capture of Art and and his companion sharing dinner;

Community Staff
Just for those who were wondering.. I was having a bad hair, bad shirt and bad glasses day that day...wait... I don't wear glasses...
Last edited: Jan 31, 2007

Okay...Um...:confused I actually started to believe it there for a minute, until about half way through..
Last edited by a moderator: Jan 31, 2007

New Member with a new Printer