I like both, anyways, I also noticed that about everyone makes the ROTJ jet pack and I'm beginning to figure out why.

One thing I donnot understand is that most make ROTJ gauntlets, Jet Packs and Capes, but an ESB helmet..

Well maybe it's my age (it's puberal behaviour to act against the current right?) but i want to make an exact ESB jet pack aswell, just as i tried to make an ESB helmet out of a Rubies Jango Fett helmet.. i know, not the best around, but i still think it came out pretty well... besides, the jet pack kit wich should be arriving shortly cost me a crate load of money, so ill just have to wait before i can even begin searchin' the galaxy for a fiberglass helmet...

but if there is anyone out there with detailed ESB jp pics (and then i mostly mean the weathering, since i do know what green, red and are supposed to be grey parts), please, post them here (I think there are alot more people in the world who either made an ESB jp, or want to create an ESB jp, for both the pics could come in handy in one way or another)

(ok maybe I'm over exagerating, since I to have ROTJ gauntlets... but i did paint them in ESB colour scheme ;P )


I have had contact with Tk-409 (thanks for your pics) and several other people about reference pictures for TESB JP, but I'd also like to know if there is anyone here with some pictures of the ESB jp that are movie-dead-on-accurate

are you making one too? i can't even start one! what materials do i use?I'm just a simple man trying to make my way in the universe...
Last edited by a moderator: Jul 24, 2017

R_boba_fett said:
One thing I donnot understand is that most make ROTJ gauntlets, Jet Packs and Capes, but an ESB helmet..
Click to expand...


Alot of folks go this route because they are doing a Special edition Fett, which is the one you see in ANH with the added jabba scene, and the added scenes in ROTJ. Basically, when they shot these scenes, they used the full ROTJ suit, but for some reason, decided to use the ESB bucket instead of the matching ROTJ bucket. (Guess they didn't figure they were a bunch of us Fett nuts that would notice the differences) If you got already got pics from TK409 for the ESB pack, its most likely that thats as good as its gonna get! There are only 3 or 4 good ESB pack pis floating around that I know of, and those arent the best...compared to the multitude of ROTJ pics avalable anyway THe best reference that I know of for the ESB pack, comes from the fold out poster of Fett that came with one of the SW galaxy mags...issue 2 or 3 I think. THis pic is on the Fett ref. CD as well, but its much nicer IMO if you have the actual poster. Wish I could be of more help, but thats all I know of. If there is somebody who has more ref pics of the ESB pack, I shure would like to see em as well
Damian
Last edited by a moderator: Jul 24, 2017

This looks like the best dead-on shot of the ESB jet pack: 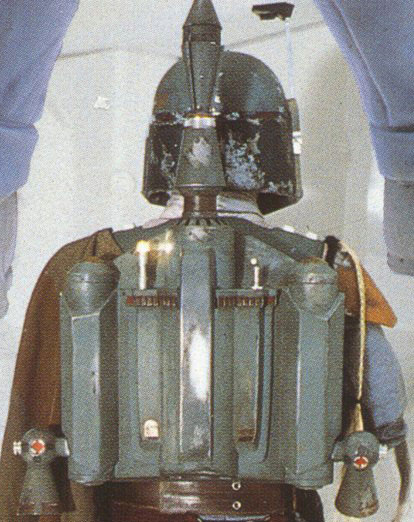 Yes,...JFJ has shown the best and ONLY good reference to go by. If you play with the picture in photoshop with the brightness and contrast you can get some of the finer details to come out. Don't overlook the fact that ALL the ESB armor "probably" got the same treatment as the helmet,to a degree.

By this I mean the washes of yellow and black/gray and spatter with the "rust" color to blend the colors. I've seen so many ESB packs just look like the were done in a day,whereas it took me month's to do mine and IMHO it shows.
Last edited by a moderator: Jul 24, 2017

i gues i was a little to impatient to wait for soem good detailed pics, so i just used as what soem people would call "artistic liberties"...

I also have a very misted look on the entire suit (helmet, armor, gauntlets, jet pack)

but i felt it was necesary as the green i used and was teh ebst i could find was far to light. So whith the black misting on it gets a good dirty darker look, but also a bit 2 dirty, as teh esb suits green is very.... consistent if you know what i mean, its the same green in all places, myn has "dirtier" spots then others.

It's not by far the ebst fett ever made, infact its barly mediocre, but I plan to redo evrythin, within time.

that means redoin both the soft and hard parts of the costume.

down points on my current suit:
-wookiee braids are nothin more then a dyed rope, unraveld at teh ends
-like i said: overall paint job could be so much better with the right basic colours.
-armor is made of a mixture of aluminium and plexiglas hand bend and has a custom weathering scheme on it.
-helmet is a rubies jango helem tconverted with a pre-tdh paint job... I want a FG helemt, most likely Bobamakers, and ill use mustard painting methods and want exact colours on it.

so thats it mostly, im satisfied with my jet pack, gauntlets, and knees, but gonna repaint it all once i have an FG helmet and new armor, in short: all the parts i want.

(il paint those pieces seperatly and wont let them replace the old ones, so my current fett will be in a one styled look, would be stupid if i got a new helemt that is dead on, to place it on the most inac set of armor ever , or the other way around for that matter)

here are some older pics to give an idea of what im tlakin about, theyre older because i have a tk-409 neckseal now, (jumpsuit is by-the-by far 2 blue) and knee armor, ESB-flame thrower and added the yellow left shoulder detail...wich is in my eye a little contradictionary i eman... i got that little detail worked out, aswell as teh stiching detail on the 2 left-sided belt pouches... but i have custom weatehring :facepalm ow and i added teh band pic cause its most up-to-date.

so here i am thinking of replacing everything, while im not even done yet: still dont have shin tools or a decent blaster. 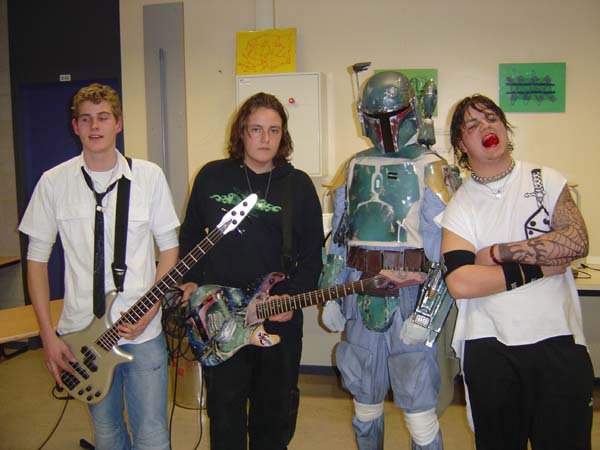 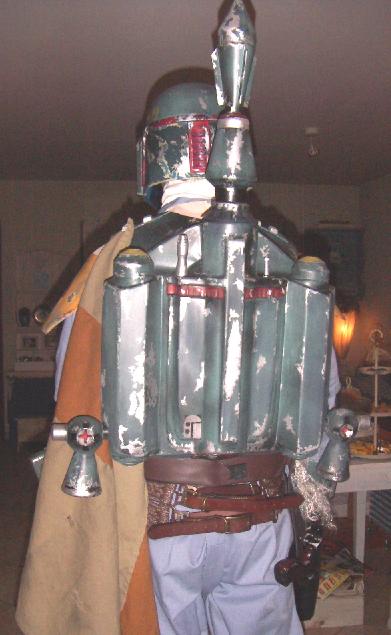 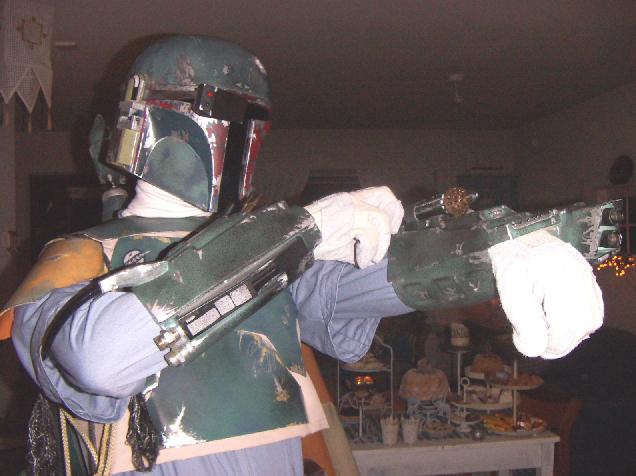 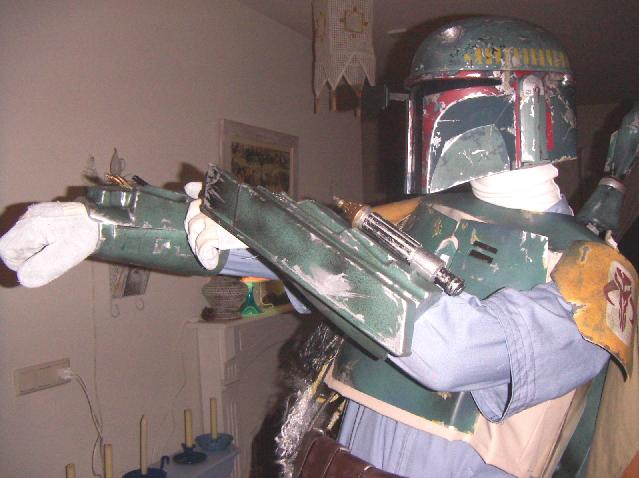 Thanks bud! I've got so much time into my ESB paintjob it's beyond calculation at this point. The lack of reference didn't deter me into the "artistic liberties" that used to own the ESB genre'. I think alot of us ESB guys have really stepped up to the plate and show off our paint skills as well as our eye for detail........and creativity in photoshop to get the needed details out of the available reference.

I've got two more washes to do on my ESB helmet and a year long helmet paintjob can FINALLY come to an end........oh and I have to install the visor and put up my "new" MS rangefinder.

in other words myn sucks!!:cheers

indeed, that paint job is amazing. But my next job will be something simmilair, cause if I got the proper reference material, I can finish an item pretty quick.

I suck at prop building and anything, but I can paint... it started all with drawing so.. http://r-boba-fett.deviantart.com/ shows old and new works, better and worse...

so i really appreciate thiese pics guys, I got braks buddy pics of the ESB helmet, so when I have a BM or M_S....it will be better...alot better then what I have now...that goes for everythin...
ow what will this suit look like in 1 or 2 more years...
Last edited by a moderator: Jul 24, 2017

Yours definitely does NOT suck I'd just think about going back in with some green to give it more depth and take away the black. If you used spray cans you could still do a wash,but just have the mineral spirits as a medium and add the green to it and use a real tight celled sponge to go back in with green.

I personally think that the wash stage is what gives all the armor peices their depth,taking them from a 2-dimensional peice to a 3-dimensional work of art! It's also the hardest part because you have to really take your time and step back to look at it. I tend to do these steps on different days and at different times of day / night.Natural light is the best,but artificial light gives a different apperance too. I also tend to go back in with at least 3 washes. It REALLY gives depth to the stuff.

yeah, ur the pro steve

well, I made my helmet pre-TDH, but used teh pics of ur helmet on starwars helmets.com.... awesome...

usually i tend to make a wash with a piece of cotton or paper, after hand mixing the colour (like the blueish, dark green on the helmet and chest armor) and then the black spray misting really blends it all together.
Last edited by a moderator: Jul 24, 2017

hmm... im considerin maskin most of the pieces that are not green, and do a wash with the accurate ESB green... so thats for the armor, jet pack, gauntlets etc , me not touchin the bucket...looks pretty ok so far...

ive done that before, after the jet pack was almost black because iw as doing black misting ina lowlight enviroment, i just rubbed the green colour back on after the black was drie....gave a cewl effect, so if a find a Tamiya spray can thats teh right matte colour... any tips ?(tamiya tends to make a nice spread look, cheaper ones gove dots and blobs)


Naa,....not Steve-The-Swede.....but I'm glad my painting skills are getting his kind of recognition

well, ur painting skills are extraordinary!!!
Last edited by a moderator: Jul 24, 2017