Ok, can anyone out there provide me with a list of parts that I would need to put two blinking LEDs in the RF when in the down position and make the screen light up when in the up position. And provide a VERY simple diagram for wiring!

You should PM Boba Swede .. he'll know whats what


Wow.. thanks for the confidence!

anyway.. I'll take a look at it and see what i can come up with..

Iam interested too, I saw hyperdynes and sheesh thats nice, but eh.. too expensive for me, I think i can do it for the bare minimum cost.. i got most the parts.. i got excess LEDs from busted computers around here.

OK.. well here's a schematic that i came up with last night..

When the RF is up the tiltswitch should be mounted so that it is in the OFF position. This will make the green LED light up since there is no where else for the current to go.
When the RF goes down the tilt goes to ON position and current goes to the Red LED's

The blinking LEDs that i have are 5V ( V = for VOLTS ) LED's and when i tried two of them out on a 1,5 V battery the blinked alternately for 1 sec each. But using 1,5 V barely makes them visible in daylight. Using a more powerful battery will surely make the LED brighter but they might also blink faster.

The resitor between the green led and the Transitor has to be powerful enough to prevent the green LED from lightening when the RF is in the down position. Electrons choose the path of least resistance..!!

PLEAE NOTE! I'm an amature... at best when it comes to electronics. I'd run this schematic by BobaBabe as well and have her boyfriend (if i remmber correctly) take a look as well. (or anybody else who knows electronics...) 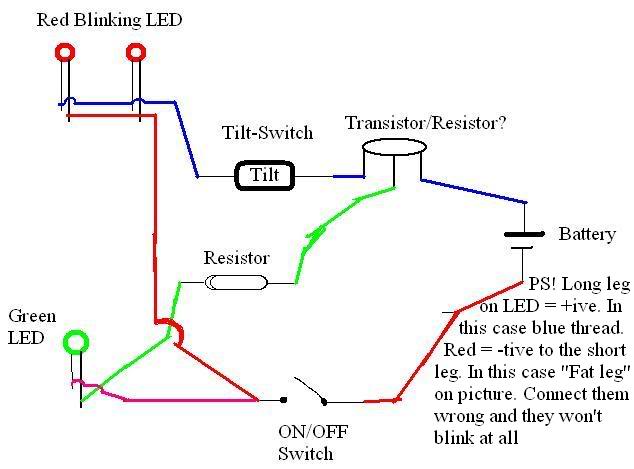 Thank you Boba Swede I was needing this information as well

Though i appreciate the praise let me repeat my words of caution:


PLEAE NOTE! I'm an amature... at best when it comes to electronics. I'd run this schematic by BobaBabe as well and have her boyfriend (if i remmber correctly) take a look as well. (or anybody else who REALLY knows electronics...)


Darn.. saying that really took a toll on my inflated ego.. <sigh> :rolleyes

ah well.. better to be modest than proven wrong i guess..
I'm not even sure this works. But if anybody has been able to make it work please do tell... so that i can let that sweet, sweet feedback go to my head again!

Well i did some trials at home with my blinking LED's. I took some video of the results but i'm having trouble with my webhost so i can't upload them for some reason. The biggest one is 3,5 MB big so if anyone wants them i can mail them.

Anyway. As i suspected increasing the voltage of the battery will make the LED brighter and blink faster. The LEDs i used eventually caught up with eachother and blinked simuntainisly before blinking alternately. To avoid this you might have to place a capacitator inbetween the two red LED's to delay the blinking.

Specify which ones and to which email and i'll send them.

Damn impressive work !! ... Cannot wait to have a go at wiring that one up

Cool Beans I see it BobaSweede! Rock on man!

How about that for timing! I've just purchased one of Bobamakers buckets and wondered "hmmmm, what would be required for me to make the RF leds and screen light up?" And here is the answer, perfect!

Where can I get a reasonably priced Tilt switch?

So does BobaBabe and her hubby concur that BobaSwedes diagram is accurate and will work?

ive recently been reading on LED and all that junk, for my gun arm of my metroid costume.. and yes, ALL LED NEED A RESISTOR , you connect the resistor to the power supply (battery) and the LED to the resistor, this limits the flow of current, so you dont BLoW your LED out, if you dont know what kind of resistor to use, gimme a PM (of if i get a load of PMS ill post it) I have a site with a BUNCH of information on making LEDs work. (the resistor you need depends on your batteries you use, and the LED specifications, aka a white LED requires more power to work, and depending on how Bright you want the bloody thing depends on the Resistor your using ^_^ _)

if you want to safely make it brighter and more volts, get the right resistor, i think the biggest baddest resistor around me is like 2 bucks, most are quarters and change though. (the 2 buck one is not for regular LEDs lol)

makin blink faster.. i dunno.. havnt read about Blinkin LED yet... a resistor just limits the direct flow of power from the batteries

resistors, when used properly, produce a very minor amount of heat, something to consider when using in your helmet and stuff, if its close to your skin (rf arent, but say you wanted a custom light in your face) make sure your skin is away/covered/protected, or theres a gap and a lil fan. ( resistors shouldnt "overheat" and blow or anything, but a little air circulation never hurt anyone.. expecially in there helmets ^_^
Last edited by a moderator: Oct 28, 2005

Wired and Ready for Lights

Wired and Ready for Lights