Alrighty gang, here is the first of many threads to come. Like I said, completed helmets only and just the facts that you want to share. If you have questions for anyone on their helmet, then please pm them privately as well as any comments good or bad. I want only posts with the helmet and the details on them and anything else that is posted will be deleted to keep this thread streamlined Hope y'all like this!

I'll get this started off.

Here's the details:
-DP 95 given to me with many cracks but dent alread filled in. Replaced visor with dark green welding visor, aluminum rangefinder stalk from BKBT, repaired all the cracks with goop and bondo, reworked the right ear piece to be as screen accurate as it could be, filed in the bottom of the rangefinder with bondo too to be more accurate and placed 2 non owrking blue led lights as shown in the Jango Display at CII.

-Colors are Krylon Short Cuts Ocean Blue for visor area and stripe around bucket. Rustoleum Royal blue for all other areas. Gray primer used all over before painting but silver areas were sanded super smooth and then rub-n-buff applied.

-Automotive pinstriping used for the black stripes (1/8" I think)

-Interior mods include a hard hat liner and 2 12V CPU fans- on behind visor and one behind keyslots which I covered with window screen. Radio Shack voice amp being used with this.

Small pics but I thought I would throw them in the mix...

This is an MLC Jango helmet. All Glass.

Here are pics of my helmet:

Helmet was originally a DP DLX cast.
Lots of bondo, sanding, & sweat went into
making this "Jango accurate".
Dome was rounded
Back extended
Earpieces lengthened
So on & so on..
As for paint, each coat of primer was wet
sanded starting with 600 grit working up to
1000 grit.
Automotive metallic (aluminum chrome) was applied
using "hard coat" technique. Then waited 1 month
before clear coating (to help prevent graying).
Finish sanding, then buffed to a mirror finish.
Areas on the ear pieces & RF were masked with
liquid frisket to achieve "chipping effect".
Two tone blue scheme was a custom mix.
Weathering was achieved through washes & airbrushing
using black & brown acrylics, then rubbed out.
Aluminum RF stalk provided by BKBT
Visor is tinted acrylic thermoformed to shape
of the helmet.
I have sold this helmet!
Art
Last edited by a moderator: Apr 6, 2006

Am I late for the party?

- Acetate face shield from www.mcmaster.com. I dont really like the welding face shield. I think its to dark for me. So I went with the Medium green helmet face shield #10335T39.

- colors cut and paste from Mirax's thread
Colors are Krylon Short Cuts Ocean Blue for visor area and stripe around bucket. Rustoleum Royal blue for all other areas. Gray primer used all over before painting but areas were sanded super smooth and then silver rub-n-buff applied.

1 of 2 custom made Fiberglass Jango Helmet, dipped in liquid nickel. Colors are scanned from movie bucket pics and repainted by me. Original owner was Got Maul over a year and a half ago. Metal rangefinder, heavy duty plexi visor and car pinstripes. Interior is lined with my paratrooper helmet shock pads and liner. 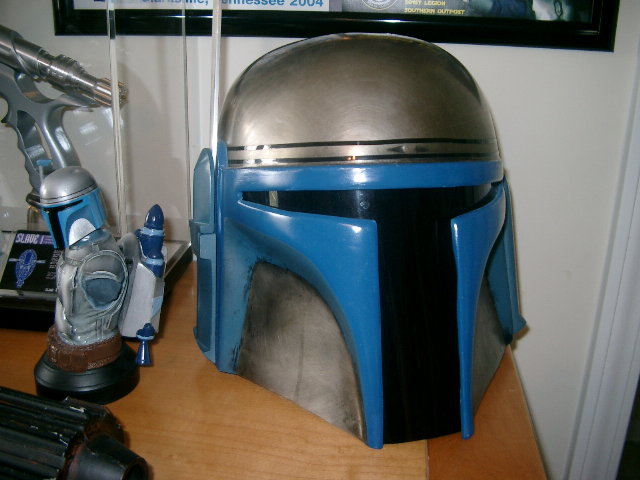 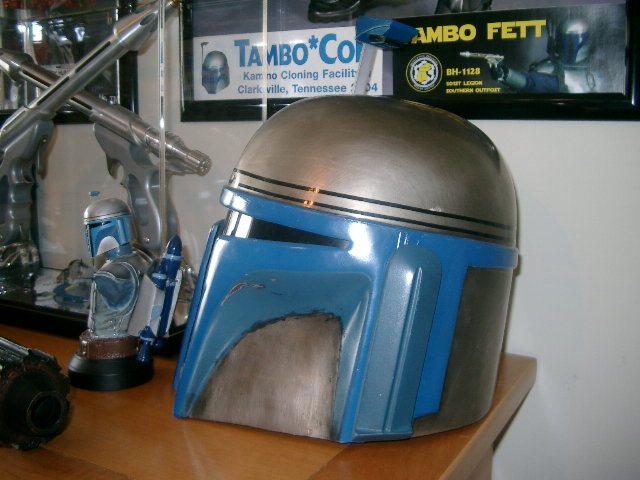 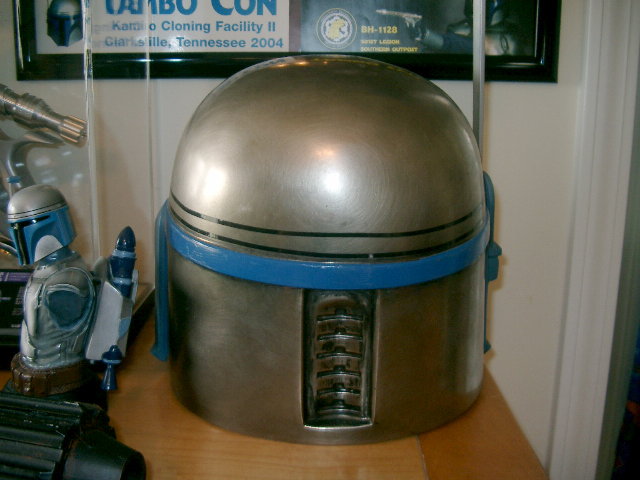 Okay, I'm finally done with my helmet. I really wanted to put a servo motor in it, but the two motors I got weren't strong enough to move the aluminum stalk and solid resin rangefinder. I just drilled a hole and bolted the stalk into the helmet.

I also repainted the cheeks to match Jango's. Compare them with my avatar. I suppose for my first helmet, it isn't bad, though I'm never satisfied with my work. Judz Dwedd, I hope I did your helmet justice. All in all I think it's pretty good.

Go to http://www.alpinegarrison.com and click on the "boards" flash link at the top. When the page loads there will be an "Album" link up top with a list of other links. Click on that and you will see my helmet in the costumes and events album. all four sides plus a couple extra body shots. Sorry for the hassle everyone.

edit: Here are the links. You will have to open a new browser first and copy the link to the new browser:

Noticed this thread has fallen to the wayside a bit. Im in a bit of a picture taking mood tonight, and thought this might prompt some of you other jangos to post some pics of your buckets!!

Just a bump (and six months worth of work):

here is my final contribution to the helmet. i finished it in time for halloween let me know what you think. it is a modified msh2.

Still need a new T-Visor as the original took a nasty scrape in the shaping process. Will be giving the RF a touch up also but the bulk of it is finished...

The t-visor is only taped in place at the moment...

The RF ear peice needed lowering to get the top pinstripe to run all the way around without a break and the left ear peice has had an extension to make it more accurate.
The RF is fixed as this bucket is for display only.
The Paint's are automotive paints with Rub-and-Buff silverleaf.
Weathered with a mix of acrylic's and used the thinner of the "double" auto pinstripe.
The diamonds are cut out completely and have a silver backing plate inside the bucket.

"Last photos added to show how it looks in darker conditions on display"... 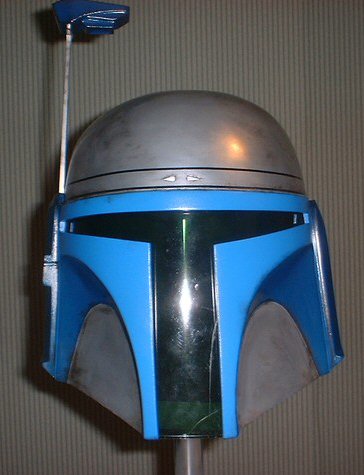 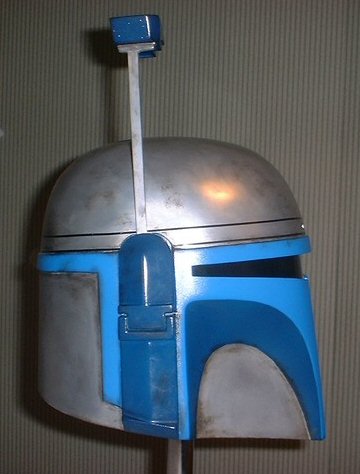 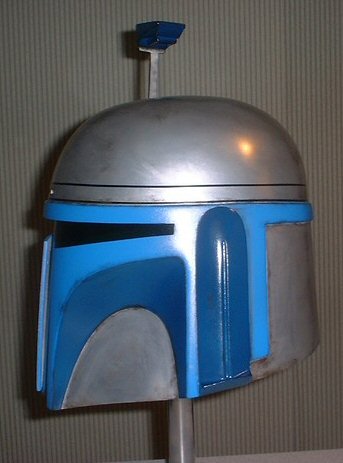 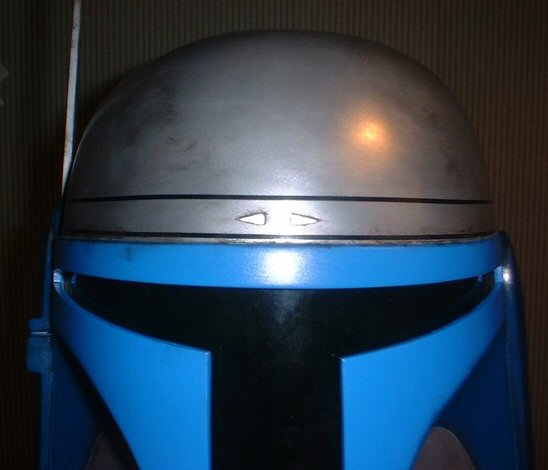 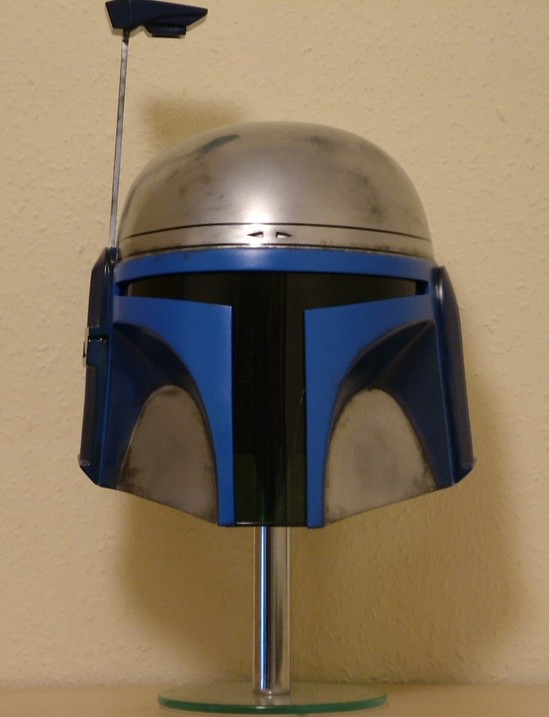 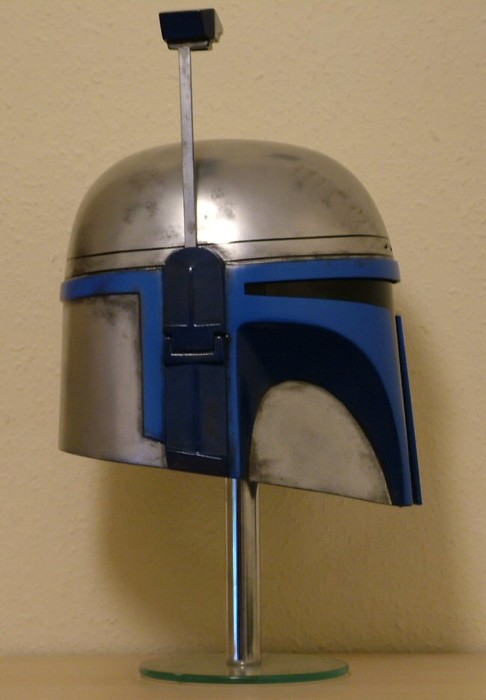 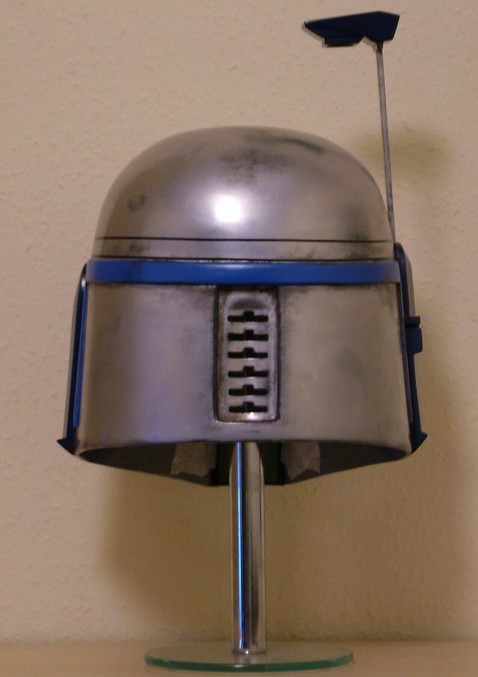 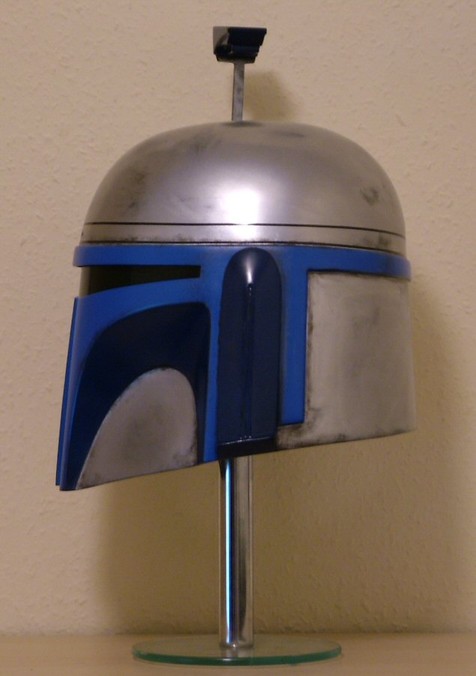 MJ allma: your bucket looks incredible except for the black pinstripes.They look too narrow.Everything else looks great.The weathering is perfect.

thanks for the comments guys ...
Posted resized and undistorted photo's...

well then i guess this will be delted, feel free to...

but this IS a Rubies Jango Fett helmet... 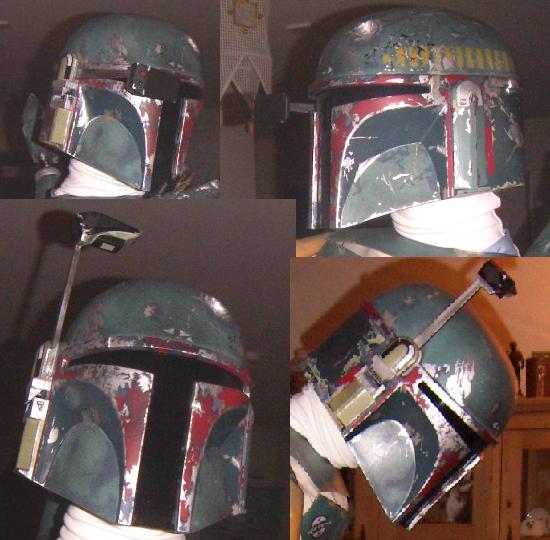 That is one first class paint job. That must have taken a lot of work if it started as a Rubies. 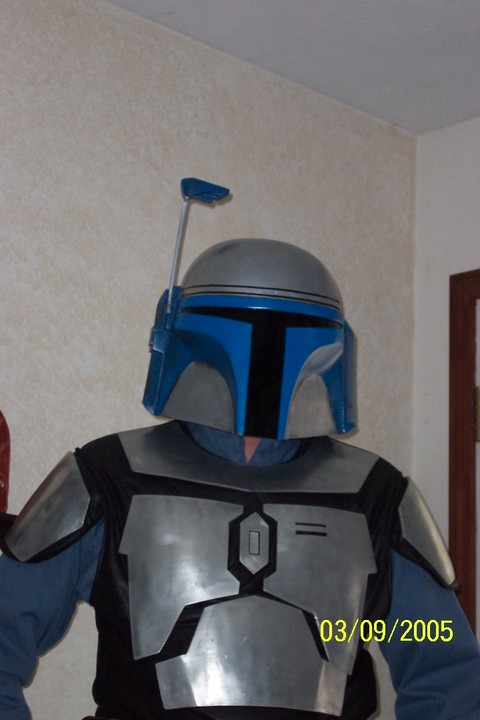