So I’ve been working on a scratch build ROTJ Fett costume with the hopes of getting in to the 501st. I’m getting close to the point where I need to start painting and weathering things, but I would like some feedback to make sure things are on target.
Now I haven’t added any wear/damage marks yet. But I think that might be my next step before painting. But I just wanted to let the experts take a look at things and get some feedback

Just about everything is scratch built. I am going to have to get some feetronics for the chest and some metal darts for the gauntlets. But everything else is basically scratch built.
Its been a lot of trial and error, but its been a very fun and sometimes frustrating project. But I have learned a lot.

Helmet: I found plans online for 3d printing a lot of parts, with the helmet being one of them.

I added the dent with a soldering iron but I think it needs to be deeper, I have a switch inside the helmet that when I lower the range finder it activates the blinking LEDs. I also have a pair of fans to help circulate the air. The visor is plexiglass shaped with a heat gun then tinted with windows tint. There are a few minor spots visible where the 3d printed parts are not perfect, but I think I can fill them with more body filler and cover some things up with paint.

Side note: none of these photos show it, but I printed things with PLA and seeing that PLA can get soft in higher temps, I added a thin coat of bondo on the inside, and a thin layer of smooth coat on the outside to help make things a little stronger.

The gauntlets were fun. I printed out one set and found they were not the correct shape, so I had to build a second set. I’m rather happy with how well they turned out. The darts will need to be replaced, as I will have to spring for metal darts. Again you will see some minor alignment issues I think I can touch up manually with paint or body filler. I did find some metal connector bits for the hoses that are needed on the right gauntlet.

The blaster was the very first thing I printed out. But this was done with about a dozen or so pieces. It still needs some weathering, but its close to done. I did use a real scope that should be within specifications.

The jet pack was a LOT of fun to fight with and print. This took about a month solid to print. Some parts taking 30+ hours to print. Again, I found files online to make the prints, but the rocket, thrusters and caps I had to design myself. I used super glue and a 3d printer pen to glue all the part together. I then used bondo to fill in the gaps, and used a smooth kit to help strengthen everything.

For the armor I used 3mm Sentra. I found the templates here on TDH. I also learned that a fabric cutting wheel makes quick work of Sentra. I live in a townhome, so I have be mindful of the amount of noise I create when I work. With a little help from a heat gun I was able to give the parts a little volume by curling the edges. I’m finding that parts of my body are shaped funny so I have to improvise.

The back armor needs more work but I think I got the shape I needed. I need to add some bondo on the edges to smooth thing out. I need to fill in some of the edges with bondo to give it the correct shape.

The knee armor is made of the same sintra used for the armor. I then added padding, velcro, elastic, 3d printed darts and used bondo to smooth the slop on the dart block. It needs more filling and sanding before I can finish it.

I was able stitch together the flight suite using a patter I found was recommended in one of the forums. I’ve got some experience sewing so that was rather easy for me. I added a double zipper, and velcro in several places.

The jetpack harness has proven to be more challenging than I thought. I’ve see fabric one that look like they do the job, but went with a modified version of the original design. I used a pice of 1/2” PVC and bended it with a heat gun and made the normal jetpack shape, and added Sentra to act as the hardware. But I also added a curve to match my backs profile a little better. I also looped the shoulder straps around the top so it can slide as I twist. It feels more convertible this way to me. I also 3d printed a belt buckle and slid that on the front belt. I ended up using velcro to fasten everything. I need to get some better hardware to hook onto the jetpack. I also added some extra red rope from the girth belt to make a type of tightening mechanism when I attach the jet pack.

Girth belt was not to difficult, but I found out that I needed silver buckles. I ordered them on eBay and should be in soon. I used Rit dye and some cotton rope. Then I stitched and glued everything together. Once I get the belt buckles, I’ll finish this up.

I used the diagram I found on TK-409s website and made the cape.

I found several websites that had guides on how to make the ammo belt. So I did a variation of the designs I found and made all the pouches usable and magnetically closable. I then created side pouches. I just have a little bit of touch up work to finish up this part.

Boot spats were an easier task.

The neck seal was also not to difficult to put together, but it’s made from the same material as flack jacket, and connects in the front.

A quick list of things I still need to get/build

I’m sure there are a ton of extra little things I need to get or polish up. But I’m hoping to have everything done and at least partly painted by the end of the year. But i’m sure i’ll be working on this for years to come.

Here are some rather recent photos of everything put together. Side note: I have a lot of tape holding together parts so far from perfect.

-Movie accurate chest lcd via Westaby (Took a few tries, but my soldering iron did the trick)
-All the paint and damage marks are done thanks to Rafalfett’s templates (Rafalfett, you the man!)
-Most of the weathering is done.
-Decorated and attached the wookie scalps (the photos just show them as they arrived from Etsy)
-Attached the gauntlet hoses to the flight suit (not shown, don’t have a newer photo)

Still need
-Correct gloves and boots. (And not willing to pay $500.)
-A few more adjustments, fill pockets and such. 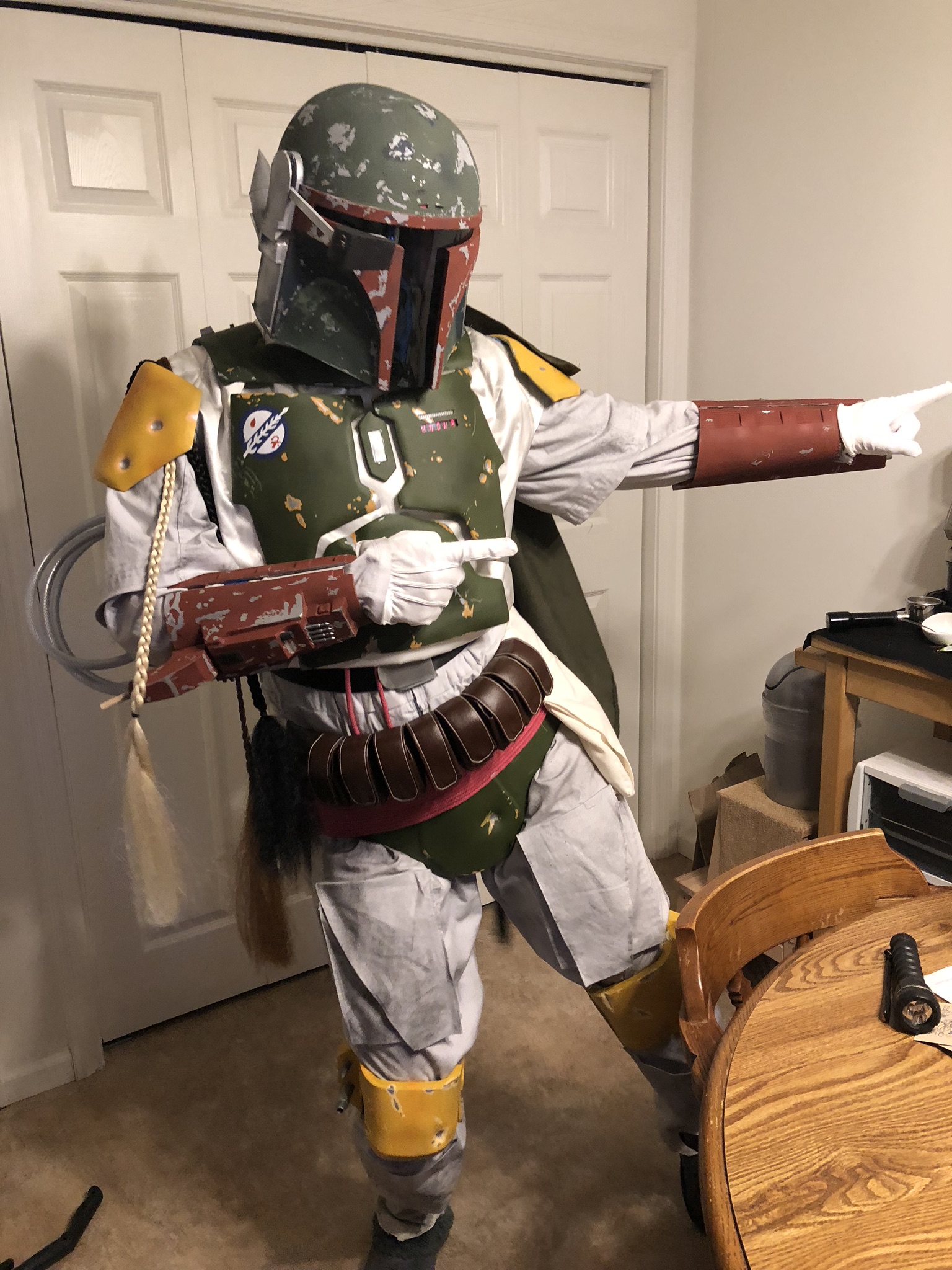 Nice start with your build! I saw you use lots of 3D printable models (that jetpack model is made by me), so here is a thread that might help you in your build ==> RafalFett's Boba Fett 3D Projects. I highly recommend to create a free account on Shapeways to be able to download my models. Just remember that these are for personal purposes only.
S

Hi RaflFett, yes, I forgot to make a note to give credit where credit it due. Excellent job with your 3D work! I do remember coming across that post before. I think I got most of the files from thingiverse and 3d warehouse via of your post.
That center part on the jet pack below the rocket was a beast!
What software do you build your models in? I made a few things in mesh mixer with very little trial and error.

I use Sketchup for all my models, but I export them to STL for Shapeways where they are automatically (on upload) and later manually checked (on sale). But there are members who downloaded the STL models and said that there are some minor structure problems which were corrected in Blender (I think).

Impressive! What 3D printer are you using?
S