So finally I decided to make a proper entrance to this great forum. :cheers

I hope I may post this thread like this and Mirax haven't got to kick me out if I do something wrong.

To introduce myself, I'm a prop newbie from Germany building on my Jango Fett 1.0. My only prop experience so far was a custom dark jedi costume (*caution advertising!* which can be seen soon in the upcoming short fanfilm Lord's Legacy ), which wasn't by far as prop-heavy as a Jango.
However since a couple of persons mentioned on a convention 2002 I would look a bit like Jango (don't ask me why, I myself don't see something equal except for the black hair and brown eyes), the idea was born of getting a Jango costume for the EP III premiere. Until beginning of this year it stayed only an idea. But since christmas I started getting parts from here and there and now I'm finally in it, working on the costume!

To start with what I already have:
The armor I got from another german mandalorian who made them with pvc (many kudos to admfrancis). Although the backpiece isn't finished yet, they really look great. The codpiece he got from another guy in the UK made from fibreglass which he will painbt the same way for me as he did the rest.

The Gauntlets I got also from the UK via ebay from frank-n-son (if someone know him), which where a bit of a disappointment, although I knew mine were the prototypes for the Jangos (as he did only Bobas ESB and ROTJs before). It was clear that a lot of work would go into these before wearing them proudly.

A fibreglass helmet kit I got from a propmaker downunder Australia. I'm not sure, but the original mold may have been a Don Post, perhaps here someone does recognize it (pics following later).

Blasters and Holster were the Rubies one. The Blaster will be ofcourse modified and repainted. The Holster don't look too bad if you stand a couple of meters away, but is a quite crappy plastic piece after all. However I thought I will use it as model for making one of real leather as well as the ammobelt.
As Rope Belt a usual horse girth belt in brown like the Boba ESB has to do, as for the real thing in leather it lacks the time and money.

I also got a nice grey overall which will be modified. (I prefer the overall more grey than blue as it appeared in the movie especially on Geonosis). As Gloves I use those from the german army, which look quite accurate.
The leathervest I plan to make myself.

As I have plenty to do and not much time till EP III, the jet pack has to wait, although I already have projected a custom build "convertable" pack which can be easily refitted from stubby to classic version in minutes.

For many works I'll have to do, this forum is a great help, giving ideas and help, for which I as a newbie am very grateful. So I thought I open this thread to show step by step my work in progress, hoping to finish my Jango 1.0 before EP III premieres. Any comment, ideas, help, anything is welcome.


I started with the gauntlets. The first pic shows them as they were (and they look on this pic much better as they REALLY were).
Although the shape of the gauntlets isn't very screenaccurate I decided to go for the accurate details except for the overall shape which would cost too much time to redo (crazy guys like you are to blame that I wanted to do it myself too! :wacko ).
First I cut the pieces to the right size for me.
The right gauntlet I removed some Boba edges, cutted and engraved some details as well as adding the switches (which will of course removed again before painting).
For the left I did the same. Fitted (not seen on pic) the red LED (yes, I'm even going to electrify the gauntlets although I'm really greenhorn in doing electric stuff).
The Rocket I removed and reshaped to be more accurate as well. Only need to be painted now.
The next steps will be to use the filler to smoothen everything up and fit the parts together.

Please excuse the weak quality of the pics as they were made with the cam of my mobile phone. 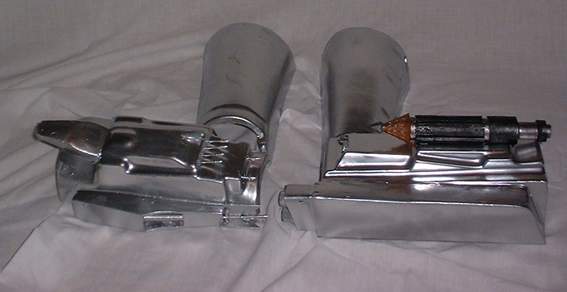 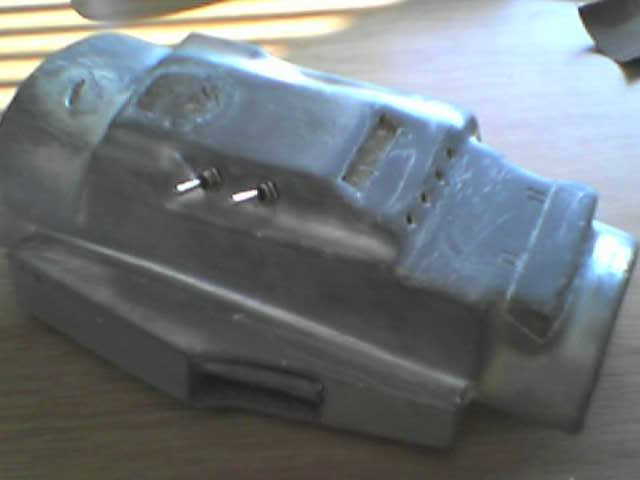 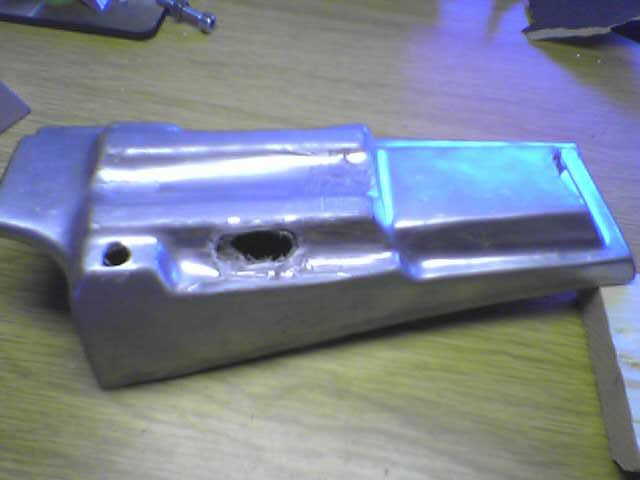 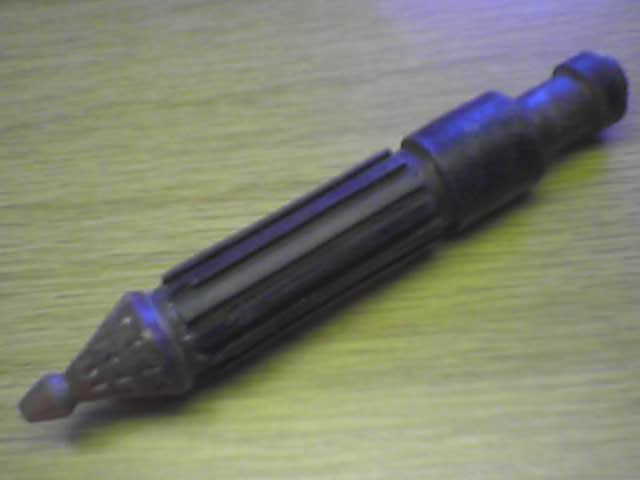 just to give admfrancis the credits he deserve, here a pic of the armor blank and weathered. 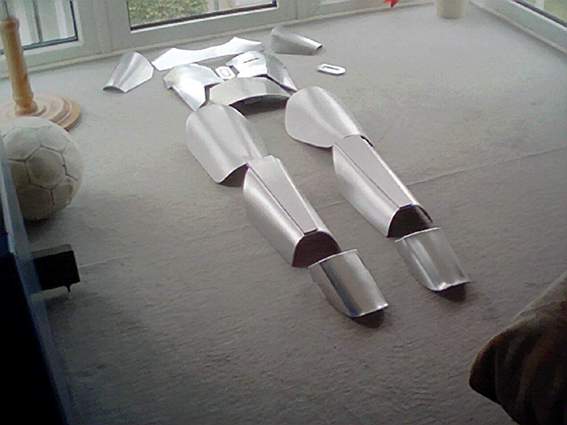 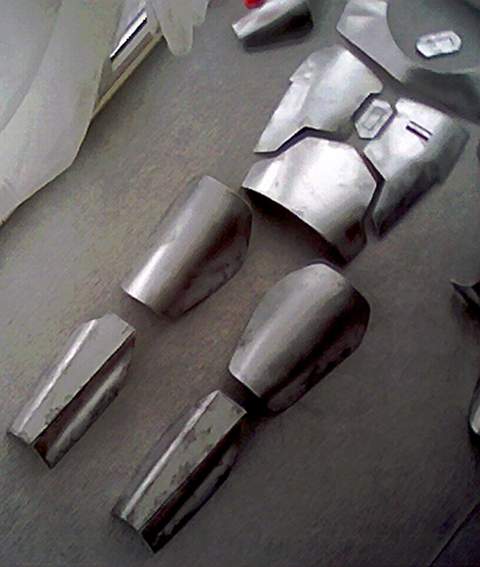 coming along then ey, but how on earth will you be done before may??

i mean, stichin work and jet pack, and the overall paint job are not a short time job...

I know it's an awfull short time, that's the reason why the jet pack has to wait and won't be done for the premiere (it's also easier sitting in the cinema without it ).
Well, for the rest, I hope I will manage to do it. At least I got a lil help from my girlfriend for the overall modifications, which I will keep to the necessary things (for example those "ripples" around the waist will be left away, as the won't be seen under the vest anyway).

By the way, does anyone know if the UK Bobamaker takes a leave right now? I already wrote him twice in the last weeks without getting a response, because I need to order a visor for my helmet, and his seem to be definitly the best to get.

Countdown going on. Anyone want to set bets on the outcome?
A

I'm sure that costume will be awsome. The armor looks incredible! Just don't over work yourself and get burned out and quit. That would suck. It's really rewarding to look in the mirror with the finished product, just remember that!

yup, i agree, take ur time.

and if you wont make it to the premier... that would eb to bad... but IF, go for the DVD release or soemthing, im sure soemthing will happen when that date arrives.

anyways, im sure BM will respond when he can, have you e-mailed and PM-ed him?

I got my knees from him, and he is very helpfull and has responed to all my messages.

Well, thnx to all. Will let Francis know that you liked his work on the armor.
And No, I'm not gonna quit, I'm far too stubborn for that..

Today I did some filling work. But I still have to do some more with a fine-filler as I used now a fibreglass filler which get's pretty strong when dried, but isn't very good too handle for smaller filling works.

I especially worked on my "selfmade flare nuts".
As I couldn't find those anywhere, I decided to make them myself. As we say in Germany "self is the man" (yikes! Sounds strange in english) and it's quite cost-efficient too.

I used a normal screw and nut, smeared the fibreglass filler on the top above the nut and then simply sand it with a rotary tool (a small minicraft) to the right shape, primed it and finally painted it silver, et voila, perfect flare nuts, which even have that slight curved line as the original.
So I got my two flamethrower nozzles and the two for the hoses on the right gaunt. 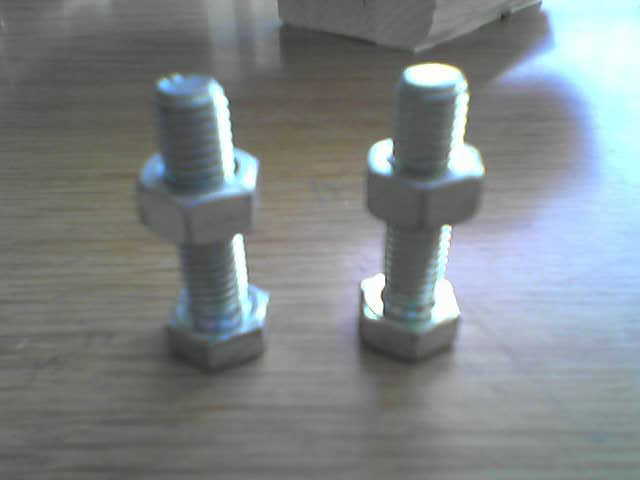 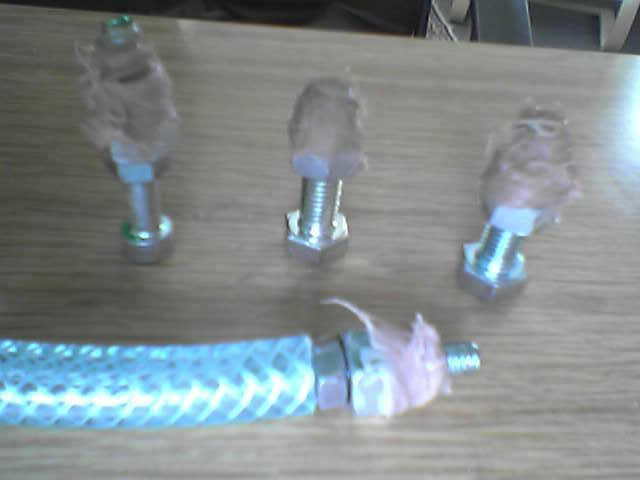 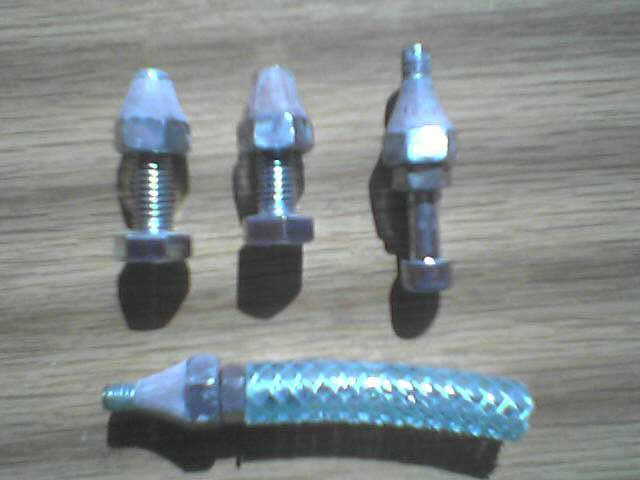 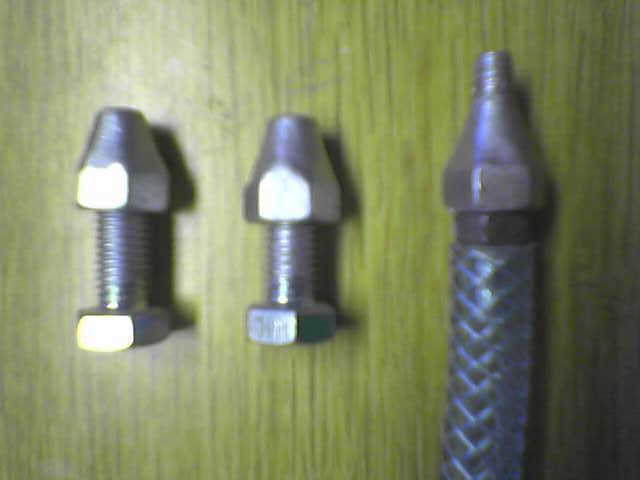 By the way, does anyone have a good pic of the part of he right gauntlet where the second lower hose is attached to (that pipelike thing)?
I could only find some shots from the movie on which not much can be seen.

Would be a great help.

Wow I like the self-made flare nuts, keep up the good work! As for a gauntlet shot, I'll look around...

Alright well this is not the actual Jango costume, this is SEEKER. (Hope you don't mind me posting this...). IMHO this is as good as the original, so here is a pretty good shot of the part your talking about.

But still it can't be seen clearly how the second lower hose is attached beneath the "dart-gun" mainbody.
On the pics of the blade poping out from the movie it seems there's a pipe beneath into which that hose leads, but I'm not sure about it.

Would be great if anyone can help.

Mostly done filler work again.
Also electrified the left gauntlet with the red LED (which will be build in after painting) and fixed the parts with filler. On the pic you can also see the fibreglass-filled hinches.
Also almost finished modifications (used a simple nail as headpin) and the paintjob on the rocket. 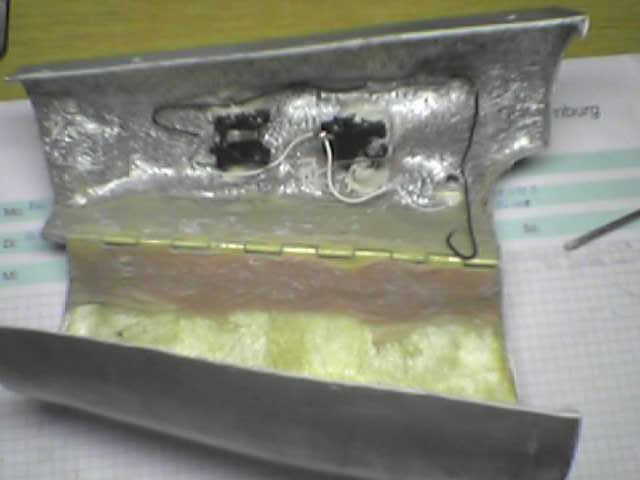 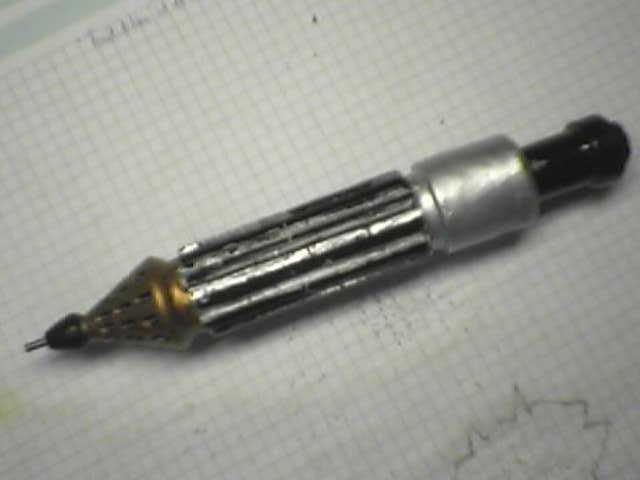 WOW! That's coming together very nicly! Keep up the good work! Sorry the picture didn't help you as much as you wanted it to.

I finsihed the detailing work on the flamethrower (still have to add the two buttons (selfmade of course ) and finally primed both gauntlets. Looked quit nice after that. I also applied the first coat of automotive chrome color this evening.
I can't wait to see them finished with all the buttons, switches and the LED.

Additionally I started modifieing the first Rubie's blaster. They are pretty nice to work on. Primed it too. 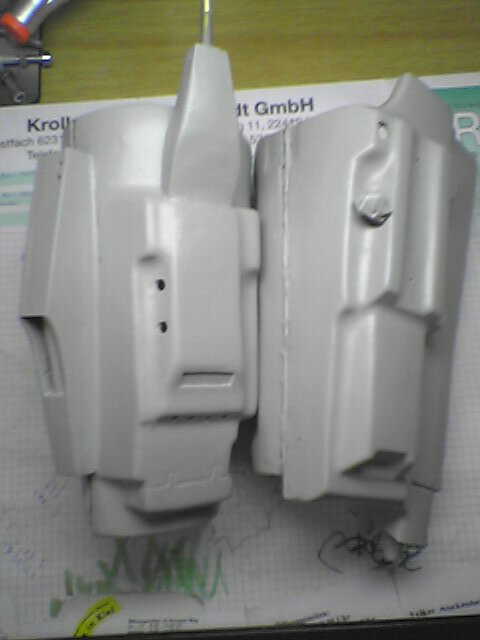 Wow you sure have turned those gauntlets around! Looking very nice!

i'm actually doing the same thing (goin' as jango for EP III). it's coming along very well except i can't really get a jet pack because i have a tight budget... i'm afraid that i'll run out of time though... THAT ARMOR IS AWSOME THOUGH...

After a week off, I plunged back into work today. 8)

At first I added some further details on the gauntlets, especially the pipe (a coppertube which I carefully bended and cut) and the connector for the second lower hose on the side of the right one.

Modified the second blaster and primed both of them.

and tataa! I started to work on my helmet.
I bought it from a prop builder from Australia. I don't know what kind of helmet was the original mold, but if the bobamakers T-Visor (which arrived yesterday. Thanks again to BM! Although it's not green-tinted it's absolutly great!) really fits exactly to the DPs (Altmann and Rubies), my helmet wasn't molded from them as it's a little bit wider.
I sanded it and cut the back holes out. Then I corrected the front part for the Visor (which was already cut out). Thanks to Seeker for showing us the correct Visor cut out. ...although I wasn't crazy enough to rework the mandibles as well (but if I had the time... who knows? :wacko ).
Also I started with the sanding of the Resin side parts, which really took some time as their surface was kind of bubbly. 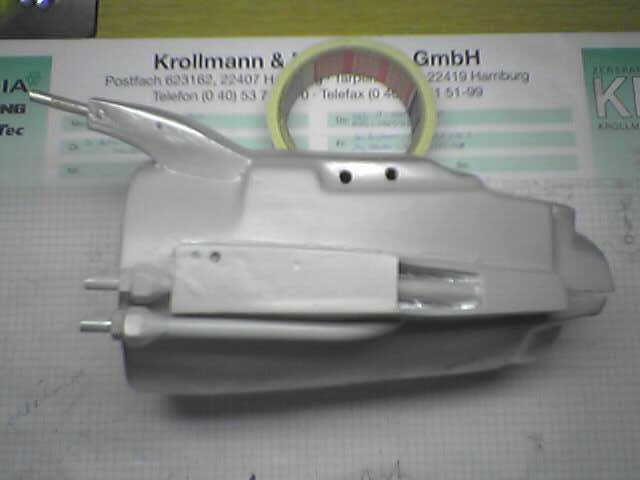 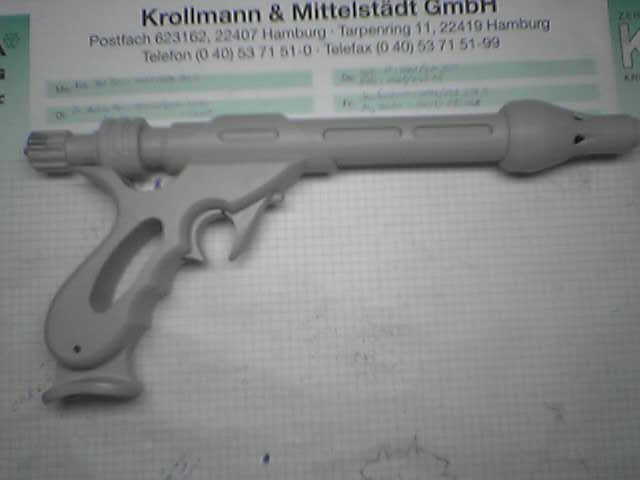 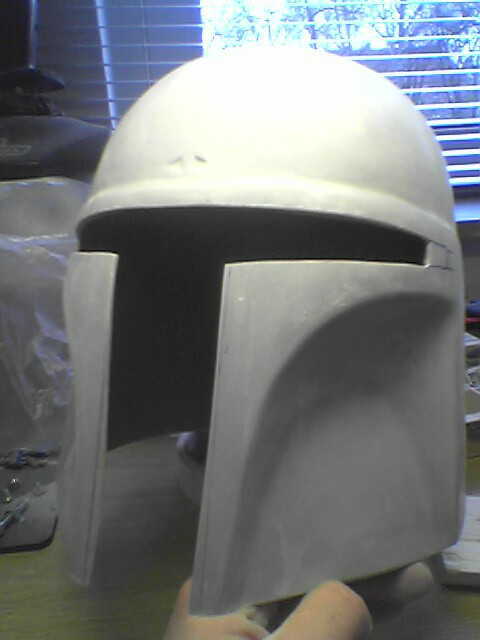 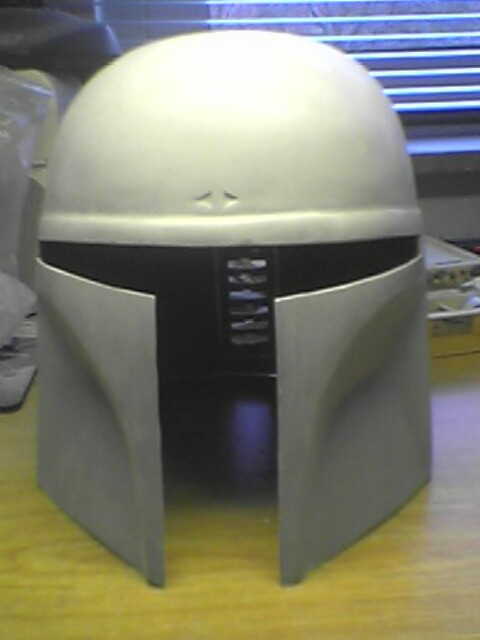 Once again, looking good! You started in the right place with the gauntlets. I did those last, along with the jet pack, lol!

I couldn't resist to post it immediatly. I almost finished the gauntlets and finally buildt the LED in and connected it and it really did work on the first try (although I'm electricaly an absolutly greenhorn)! 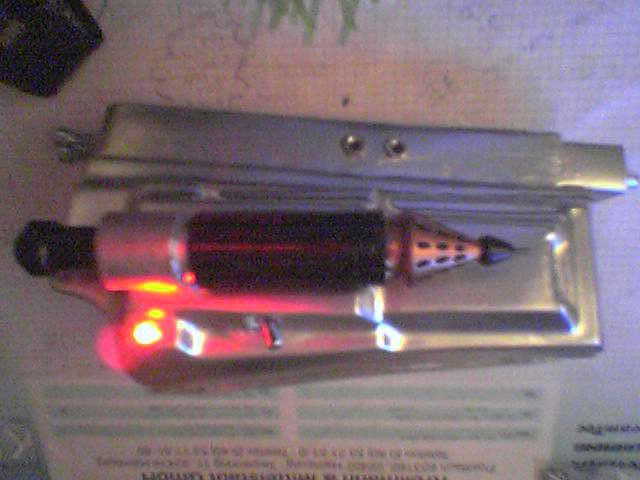