I gave it my all fellas! I had 4 days to get my BKBT Jango helmet ready for an event and I did the best I could in the given time! Even though I'd had this helmet for well over a month, I was dragging my feet on finishing it. And I knew I couldn't show up in my Rubies Jango after being asked to make an appearance for Star Wars Night at a local Bakersfield Condors hocky game this past Friday, with some members of the SoCal 501st Garrison. So here it is...and you don't even want to know how many Bobamaker and shade 5 welding visors I went through before finally not screwing up the one in the pics.

The visor is a green welding visor. The black striping is 3/32" automotive striping. The range finder is a hollow rf cut from a Rubies Boba(l.e.d.s and remote control servo to come later). The entire inside of the bucket was sprayed with rubberized coating. All of the hardware is stainless steel. I doubled up the screen mesh covering the key holes and painted it with some flat black to make it less see-through. And finally, the padding used was taken out of an old beanie motorcycle helmet I had laying around.

Any questions, let me know. 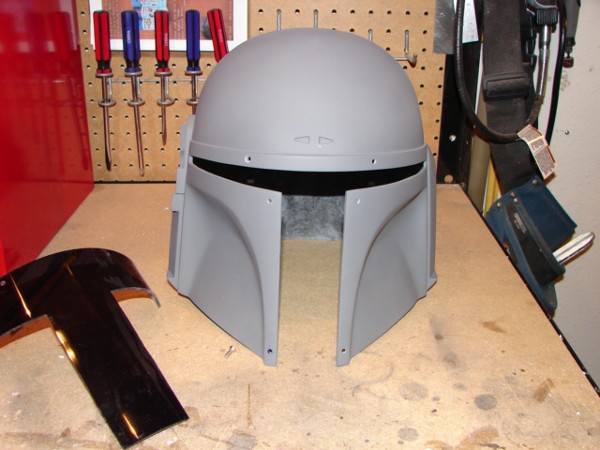 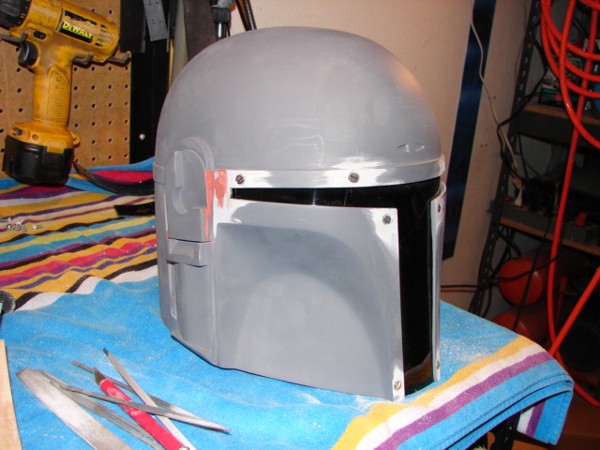 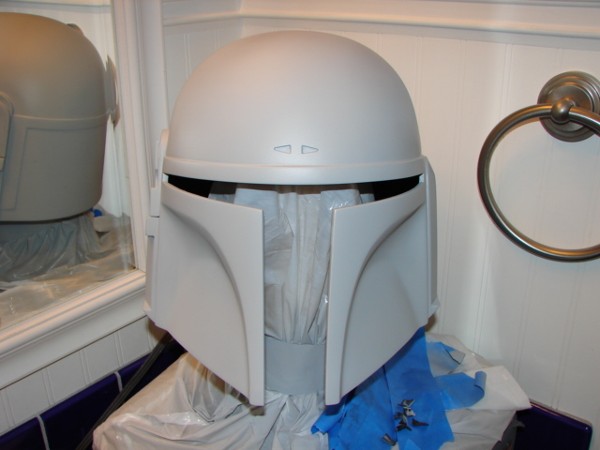 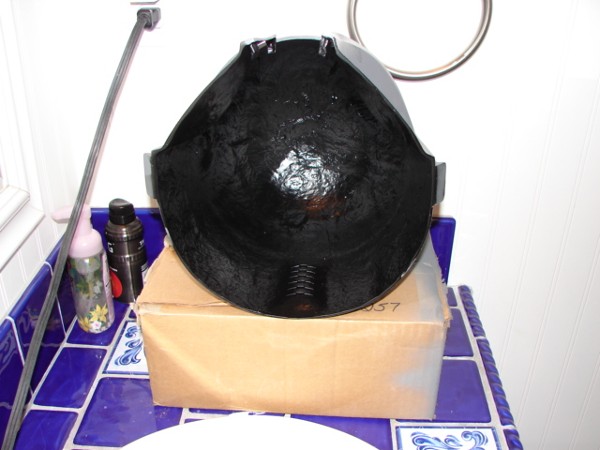 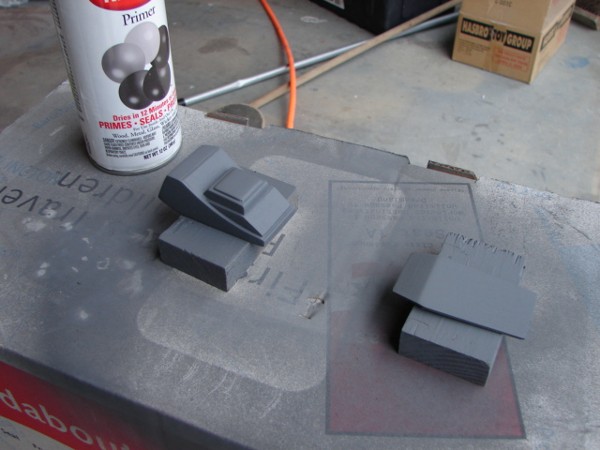 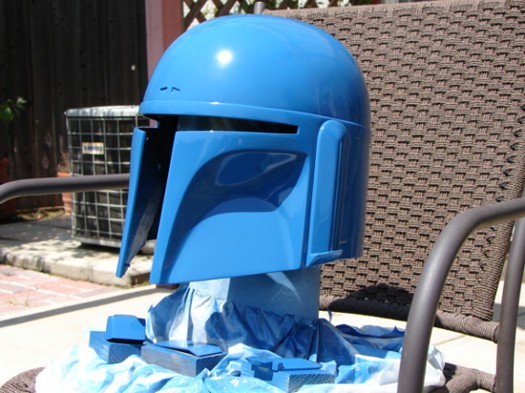 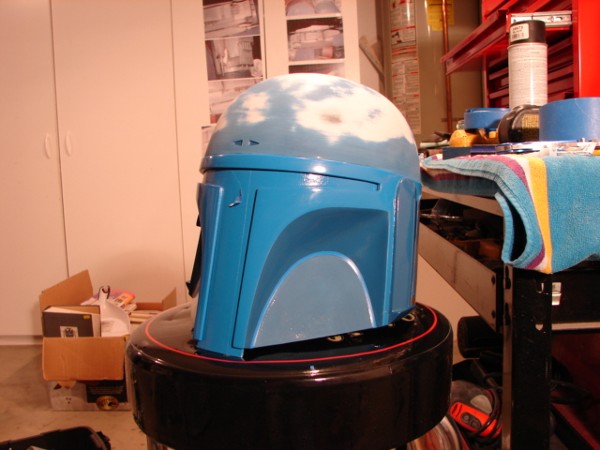 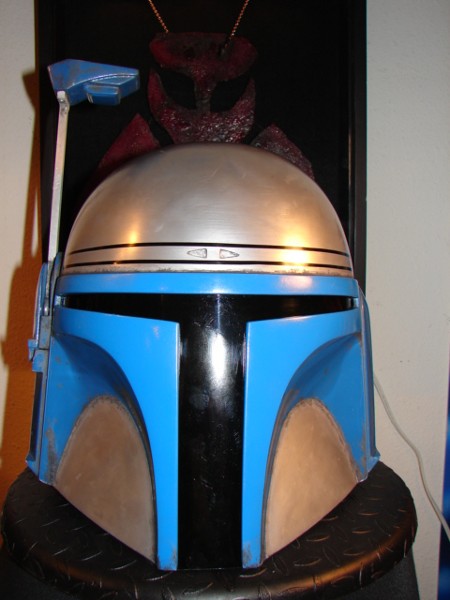 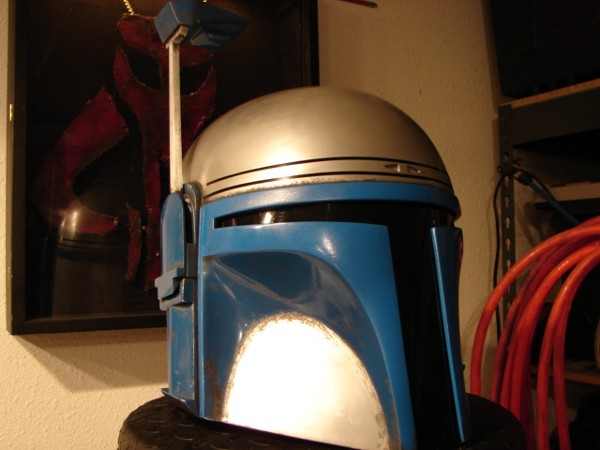 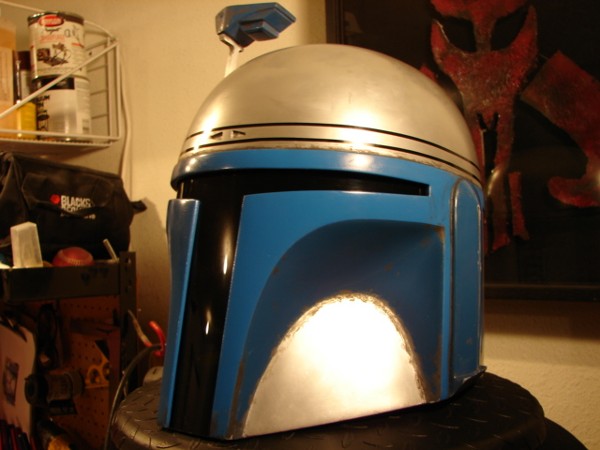 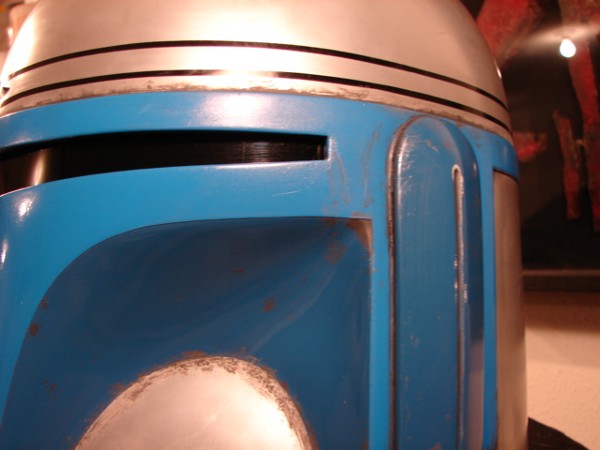 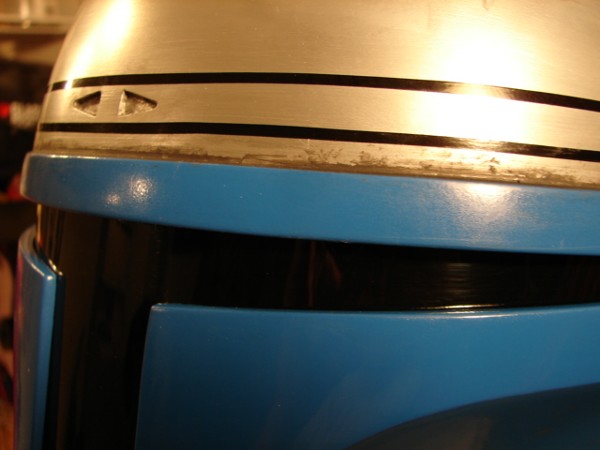 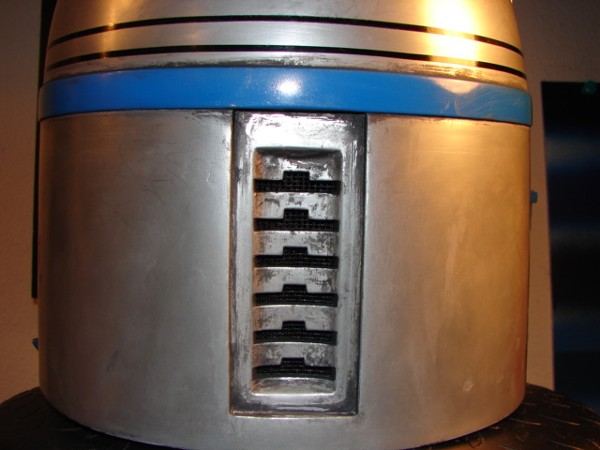 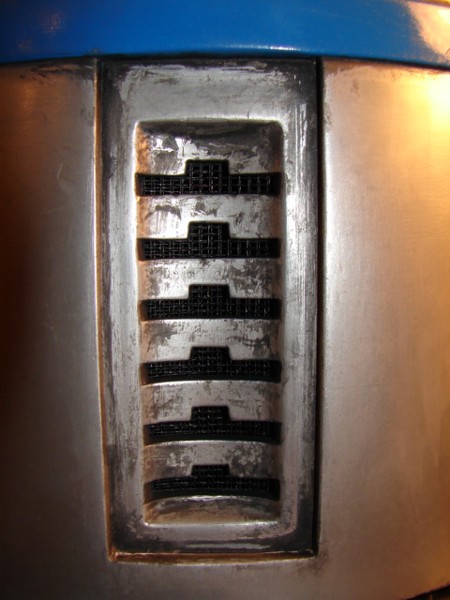 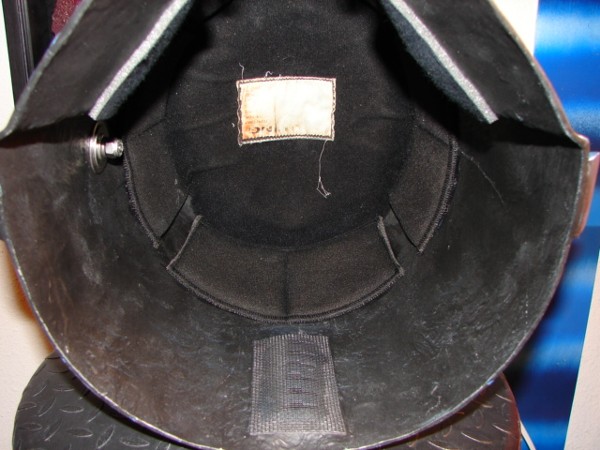 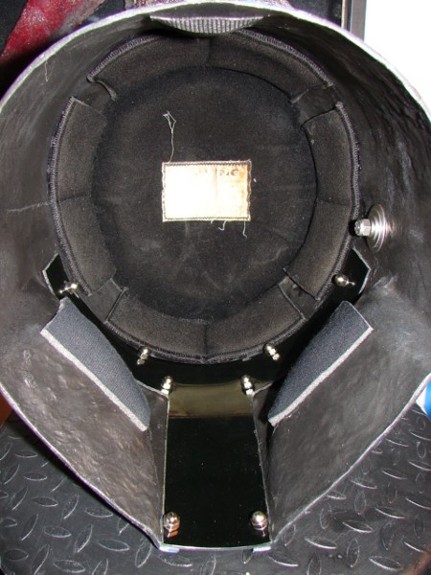 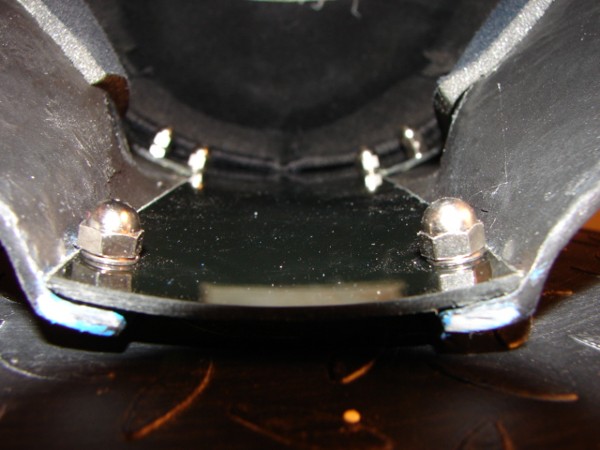 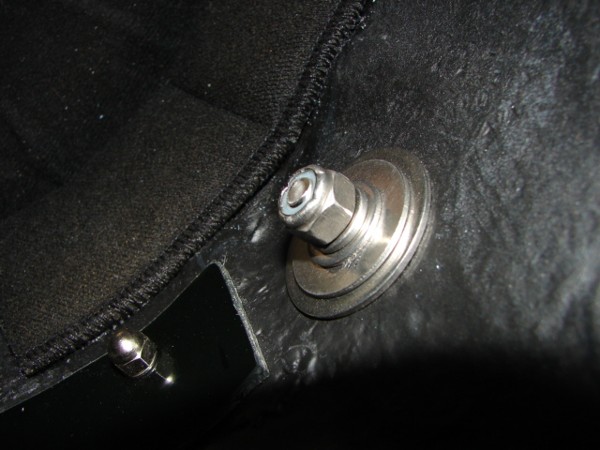 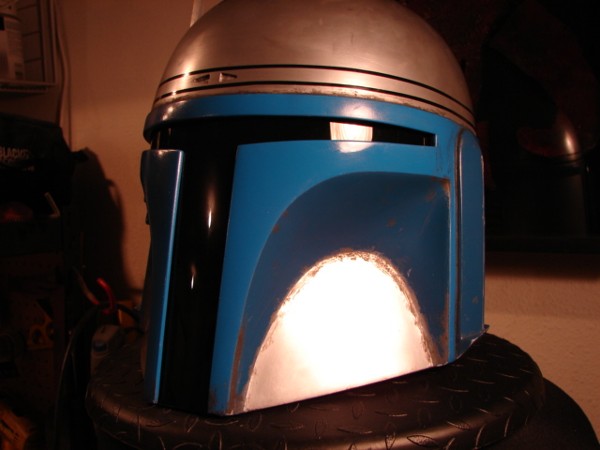 Damn Cruzer, That´s the cleverest way to atach a Visor I´ve Ever Seen!!! I would wish to get your skills!!!!
Great Helmet bro!!!

I´m about finishing mine, in about 1-2 hours i´ll post pics.

AH JEEZE! I cant wait to get my helm! Im about to go crazy over here, That is one hekk of an awsome helmet. Both you and jangouri are so keeping me motivated to start a helm project. Outstanding guys,

-tubachris
(who's gonna to take a sledge hammer to his rubies helm once he finishes his future BKBT, and show no mercy whatsoever)

BBBBBad... bad to the bone!
Time to update your avatar;-)

Wow! Terrific work! I like the visor attachment method as well. . . I would have been terrified to do that to my Boba lid.
But it came out great! :cheers

By the way cruzer, I was thinking... Could this Visor Attachement be dangerous? I mean you maybe should install some protection on it... imagine what could happen if you fell and Helmet interior hits you...

That looks great. Brave man to be drilling holes in a new pretty helmet. I'm surprised you found a sunny day to get that painted, I was hoping you didn't float away.

*edit* after reading, I answered my own question. duh.
Nice job! Very ingenious way to install the visor.

Great job on the visor. :cheers

I've been draggin on mine as well. I gotta get it ready in time for the photoshoot.

I am glad I only have primer on mine, I love that idea!

Thanks guys. Glad you like!
If you're going to try this at home just don't make some of the mistakes I did by using Bondo, or PC-7 epoxy to back fill the holes and cover the screws because those materials aren't strong enough to hold the screws down or withstand the pressure and movement. I eventually had to redo every screw three times because with both those fillers the screws kept popping out or pushing through the paint. So eventually I resorted to using Plastic Welder(extremely hard when cured) two part epoxy from Wal-Mart, grinding down the built up mess with my dremel and then using Evercoat polyester glazing putty(cures much harder than bondo) to smooth out the countersunk hole areas.

It was only later that I was informed by a good source in the prop business that I could have also used some CA glue and activator to glue the screws down and then backfill with the same Evercoat filler...why couldn't they have told me about the CA glue sooner?:confused

Oh well, I now know that for my Open Seasons Jango helmet I'm working on.

Sad pics below showing what not to let happen to you,
Cruzer 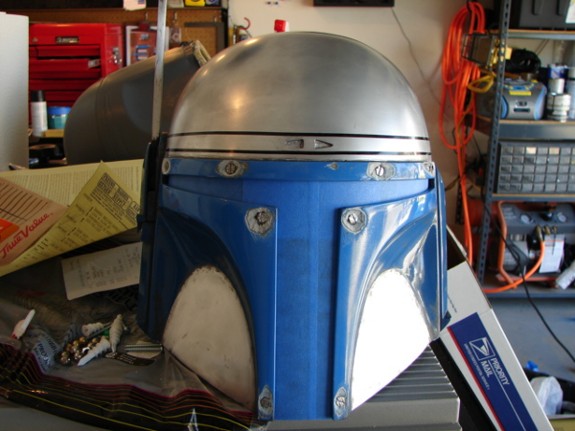 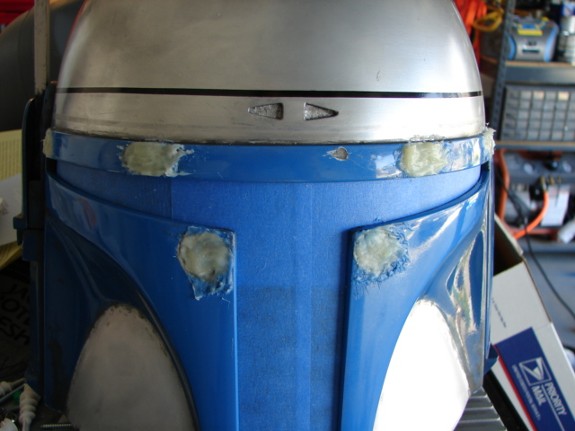 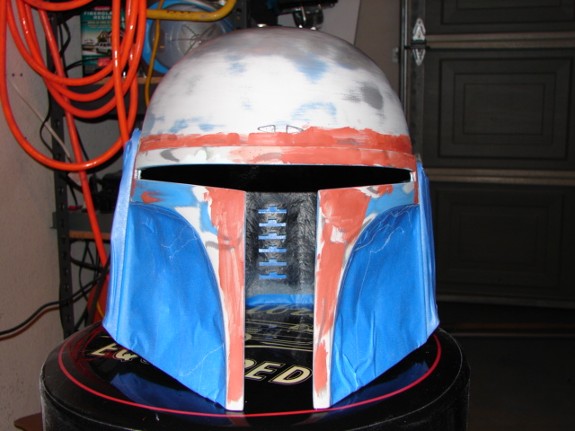 Ohhhh! The truth finally comes out! Doesn't that just suck big dookies when your so pleased with yourself on how good of a job you did and then reality has to go and rear it's ugly head and ruin everything, darnit'? GRRRRRRRRRH!:angry I know others are wondering this same question, so I'll go ahead and be the one that asks it. Is there any way that you could make a template of your visor with measurements, so we could keep the welding visor population from going into extinction? So, maybe it's like, 1. Cut the visor to match template, 2. Tape inside helmet, 3. Mark holes inside helmet 4. Drill holes. What da' think? Would Ya'? Could Ya'?

Yeah, the moment at which I wiggled some of the screws or overly tightened them and saw them starting to move under the paint was a dark moment.

And I should also mentioned at first I made a very small countersunk hole that I don't think allowed for enough filler. So that's why in that first screw-up pic you see a lot of the area cleared out around the screws. I cleared more area out around the screws to allow for more bonding to the helmet surface. And that Plastic Welder epoxy is indesructable (used it for the aluminum backing on my JD knee armors) so I knew that would hold like a champ. It's just a pain to sand because it's so hard when cured, so I took the dremel to it.

As far as the template, I used the basic shape of one of my Bobamaker visors, but had to lengthen the ends in the eye areas because it wasn't as long as I wanted it to be. But if you use the visor template that BKBT provides with his helmet that should be sufficient. The only reason I went through two Bobamaker visors is because I used too long of screws the first time and cracked the first one trying to get the visor off after setting it. Then I grounded the screws down a little and cracked the second one trying to force the visor on. What can I say, I'm a Neanderthal! The welding visor is about half as thick and I noticed it's a lot more bendable and so I was able to work with it better. I just screwed up my first welding visor because I tried to clean it with Acetone(stupid me thought it was solvent resistant )

And just to let everyone know, the acorn nuts don't even come close to touching my face when I press the front of BKBT's helmet towards my face. Trust me I tried it because the thought had occured to me too. But I noticed the recessed mandables stop the visor area from touching my actual face.

Based on my trial and error, I would suggest the following steps for anyone who's thinking about using this method to install their visor.


1. drill your holes (one drill bit size larger than the diameter of the screws to allow for play) making them fairly symetrical on each side.

2. then mark the holes on your visor while you temporarily hold it in place.

3. remove the visor and drill out your marked holes with a drill bit that is two drill bit sizes larger to allow you to easily put on and take of the visor and adjust as necessary.

4. Countersink your holes using a countersink drill bit. Then with a utility knife clear out some area around the hole to enlarge the filling/bonding area and rought up a little with 60 grit sandpaper.

5. With your dremel and a grinding bit, rough up and somewhat gouge the screw heads and tapered areas. Make sure you leave enough channel to still use a screwdriver to tighten the screw.

6. Put some masking tape on the exposed surface of the visor so it doesn't get scratched or so that the filler/glue sticks to the tape.

7. Install the visor via the screws and the nuts you decide to use. I'd recommend hand tightening with the use of a socket but not using the wrench that way you don't overtighten them and risk tearing through the helmet or cracking the visor.

8. Doing one screw at a time, take off the nut, remove the screw, and apply your glue/epoxy around the hole area. Then, reinstall the screw(trying to keep as much glue off the threads as possible) and the nut and tighten so that the screw is in the exact position/angle it needs to be in when the visor is installed and the nut tightened. Then leave it to dry and move on to the next one.

9. Rough sand, fill, and smooth to your heart's content before primering.

That's how it worked best for me. I know my explanation is long, but I wanted to share it with everyone who was interested because of PMs I've received asking for details.

Give me a minute and I'll post some pics showing the materials and hardware I used.

That is a bummer about all the extra work though!

Here's a pic of the various materials I used for the visor attachment and weathering that a few PM'd me about. 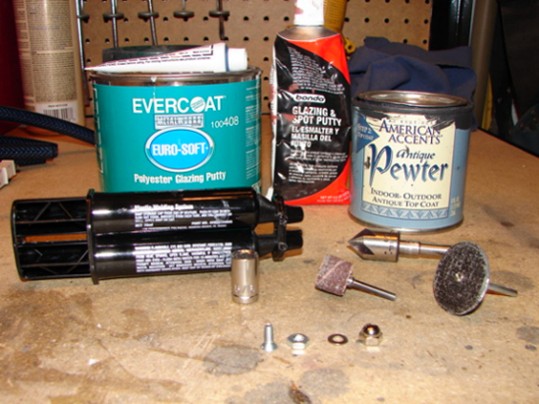 Tracking down my old costume

Tracking down my old costume