How much bigger is the MS on the inside as compared to the DP 95? Here's the situation. With the fan, batteries, and visor all in place, my huge nose makes it next to impossible to put the bucket on. Luckily, I have not actually glued the visor in yet. But if it was in i could a) not breath well and b) not be comftorable.

IT really depends on what sort of harness system you use. I have a hardhat susspenion in mine so it looks alot bigger on the outside but seems the same inside. without the liner though I noticed alot more room. I guess you can always place the padding inside where it best fits your head. If a DP fits you barely His helmet should be good.

I donno exactly how much bigger it is but i know its alot wider. Chris tk-409 has the measurements for the MS bukcket on his site here:
http://www.tk409.com/images/fett/helmet/measurements.gif
Hope thats helps.
B

I have the exact smae problem. I had to crave up my batting helmet liner to almost nothing, with no padding in the back, and my nose is still smashed on the visor. (with a DP 96)

I JUST got my MS about a week or 2 ago. Ive realy enjoyed just looking at it and wearing it ocasionaly (even though the visor isnt cut out). But JUST TODAY I saw a Rubies Boba. I dont know how much smaller that is than a Don Post, but that thing was TINY compared to an MS. I looked at it and thought how lucky I was to have my MS. I couldnt imagine fitting anyting other than my head in there.

Vida said:
dont know how much smaller that is than a Don Post, but that thing was TINY compared to an MS.
Click to expand...

especially around the visor section, I have a Rubies Jango bucket and the visor area is far to thick.

I saw a DP 95 or 96.... not sure, it had the green interior, but it looks supreme incomparisson to the Rubies buckets.

and then theres the supreme works of MS and BM and such wich compare themselves to Dp's as Dp's do to Rubies.... does that make sense?

Experience in this group thaught me:

Any fan-made helmet around is the biggest (and probably the most accurate) helmets around. Now, comparing each other side by side...that's another story.

Any licensed helmet (i.e. Rubies, Don Post), are NOT ACCURATE in size, and mostly made with kids or young teenagers in mind (too small). From the whole crowd: DP' 95 (specially the one with WHITE INTERIOR -which is rare- is the biggest, and probably the best option if you go that way. I had one of those. DP made also the DP 96-97 (the latest one, being the worst of them), but better than Rubies. The licensed helmets were reducing, both in size and quality as the years progressed, changing the license to Rubies in 1997 or 1998 i believe, who ended up with the DP molds and then messing the product completely.....aka. making CRAP! Flimsy, narrow, smaller, and definitely NOT ACCURATE in any way, but making the product even awfully-looking. uke

The Don Post Deluxe, which was in FIBERGLASS, while DEFINITELY BIGGER than the regular DP and Rubies counterparts, tried to recreate the look and feel of the real helmet....still, not accurate from the screen-used ones, and yet slightly smaller than the screen-used or Fan-made versions. My helmet as of today is a recast of the DP Deluxe I bought on Ebay couple of years ago. Only difference you could notice about the DP Deluxe is the markings, dings and scratches that are actually indented into the helmet...that you could literally feel them with your fingers...making it realistic, but not perfect.

Now, couple of artisans around here (FP, MS, GF, Sarge's, etc.) made awesome versions, more accurate, dead-on with the size and shape, but they all have also few differences between each other....all depends on what you're looking for. There is a thread around (not sure if it was deleted or not....MODS???), that mentions the difference in helmets according to the movie (i.e. ESB and ROTJ) versions of the helmets are different from each other, and not necessary about the colors or paint scheme, but in shape and size. It was something like FP's MSH (1 and 2) and Natty's helmet comparisons, that the first one was perfect for ESB, and Natty's for ROTJ.

The option is yours, of which version suits you best.

I saw a pic here that showed both buckets to be exactly the same actually... I also read that all Fett buckets are the same, from pre-pro 1 to ESB...

here it is... there are differences in handling and such, the ESB wavy brow, the ROTJ sguinting visor on the bottom....

but theyre the same sculpts... 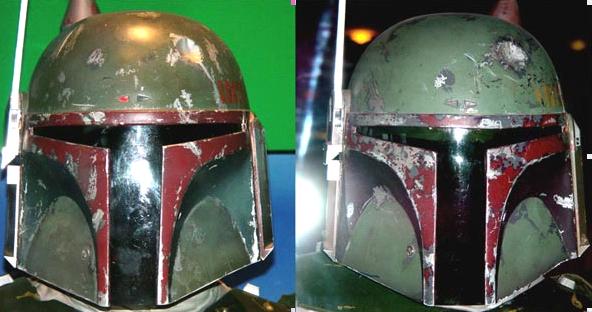 Taken a few comparison pics of my DP 95 (white interior), 97 and MS

yep the 97 does look bigger:facepalm