Alright peoples, I finally got up off my lazy butt and put my Jango together. This is like a really early stage picture, and yes I do understand that I do not have all the parts even on the suit yet, but it is still something! The helmet looks kinda warped (thanks rubies!) but I've fixed that a lot last night by putting something inside it to push it out and try and keep it staying more ... Jango looking, heh. The armor is one of those crappy $80-$100 EBAY sets, I'm planning on upgrading the cod and knees first. I do not have a jet pack, gauntlets, ammo belt, or braided belt yet. The vest is made out of vinyl, I think it came out alright, but I need to fix the left side because the velcro isn't staying together as you will prolly see. The shirt is a blue t-shirt, put on over a long sleeved church-kinda shirt. I picked up both at wal-mart. the pants made out of some blue material I found around the house. The chest armor is all attached by velcro, so far that is holding pretty well. the velcro holds to the armor nicley, and it hasnt given me any trouble yet with sticking to the vinyl. The blasters and holster are the rubies set I got off of ebay. They are working pretty well for now. I will upgrade that way later. I havent done anything to the armor to make it any shinier than it came in that big 'ol UPS box. The leg armor is attached by putting peices of velcro on the armor, then sewing another peice of velcro to some dyed elastic, then just wraping the elastic around the leg and it holds pretty well. the knees are slipping because I havent done anything to make them stick to the actual pants yet. The boots I got for about $20 at payless. After seeing people pay hundreds on the boots with the hump or whatever its called on the outer side, I just decided to get some cheap boots. Besides, whos looking at the ground when they see Jango come around the corner! The helmet I padded a little on the inside so it fits snugger. I will post pics of the interior of the helm later. The VF is kinda "loose" and falls down all the time. I've temporarily fixed this with a little roll of sctoch tape on the back of it so its sticking to the ear, but if anyone knows a better way to fix this, I'm opened for any suggestions. I'm also open for tips on the whole deal. 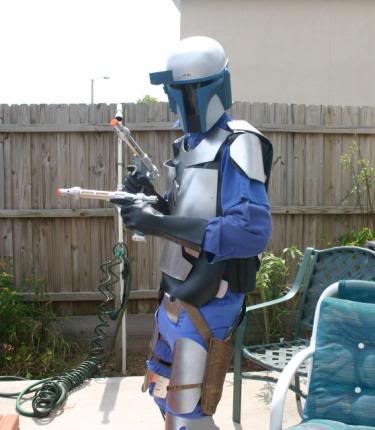 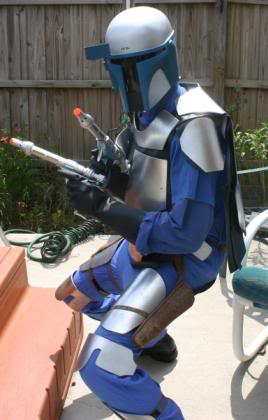 UPDATE: I noticed I didn't have any front on shots, so I got some! Here is a better view of the chest armor... kinda big... I will prolly be getting replacements soon. Sorry for the brightness. I didnt see that until after I'd taken all the stuff off and everything. I did these shots with a video camera, then took screens with my computer from the footage. You can see how i widened the lower part of my helmet so it looks better in the 1st new pic. So now it dosent look all big on the top and small on the bottom like the earlier pics. 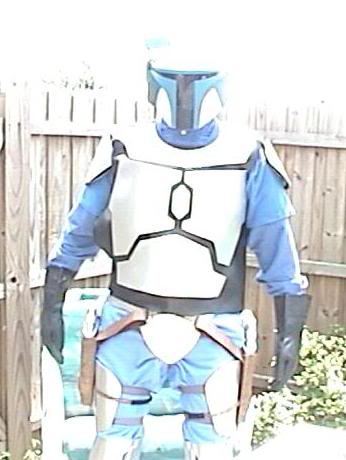 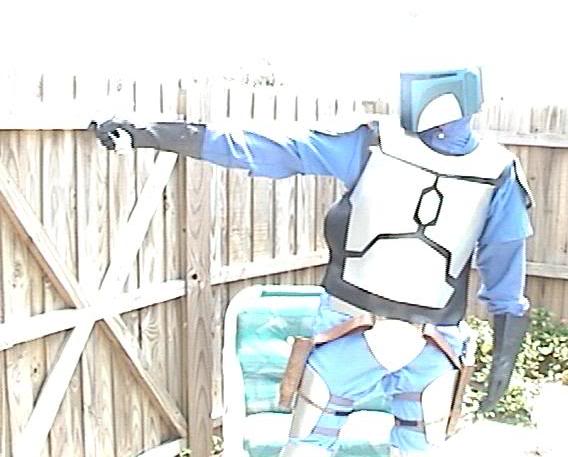 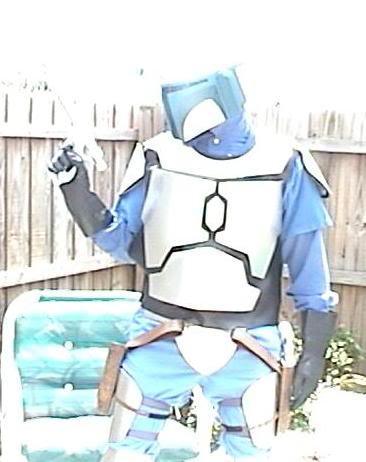 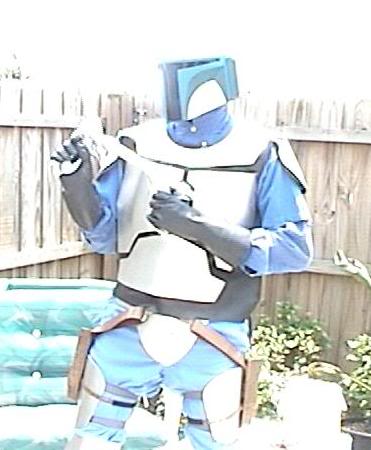 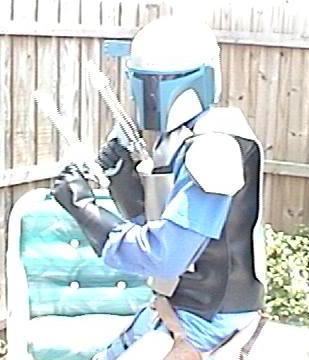 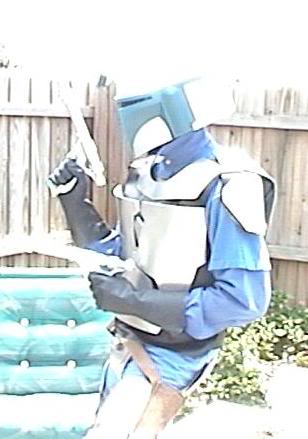 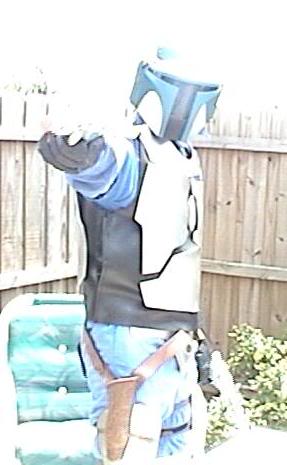 Very good start, dude. You've got the most
important part done...mastering "the pose"!
Keep up the good work!
Last edited by a moderator: Jul 24, 2017
R


It's the link to the start of my Boba suit. I haven't examined the Jango armor in great detail but this should be close. I used Plexiglass for the armor and you can see a piece of it here in the above link.

There is another link of my more finished armor, but the picture links are bad so I'll have to fix them at a later date. Or maybe just take new pics.

I'm not sure how much access you have to tools but to make my armor here's what I did:

Plexiglass comes with two side protective "seran" wrap. Leave this on. I got a sharpie marker and one of the templates that is floating around TDH, and traced out the first chest piece. The plexi I used was 1/4" (+-). Then I used a fine, but not too fine of tooth on a table saw to cut it out the major sections. When cutting into the corners you have to becareful not to cut all the way as the saw blade is rounded and will cut deeper underneathe than on top. You'll be able to see through the plexi to understand what I'm saying. Once I got those corners close I took it to a band saw (hand saw will also work here) and squared out the corners.

You can take the seran wrap off at this point. I took the piece over to the bench grinder which has a rotating wire brush on the other side. With the grinder spinning I rounded off the top edge all the way around. Becareful in the corners as you'll take off more material then you want.

After that I went inside and turned on the stove. We have a gas stove so I used that as my blow torch I heated up the plexi while wearing oven mits. Now some people will tell you to use a heat gun instead so the plexi doesn't catch fire, but the stove is SO much faster. You just have to keep it moving so it won't start to burn. When it starts to become bendable I stuck it inbetween a few tshirts and pushed in the center so it would bow out. This part you can't see in the pic that was taken before I heated it.

After that sand it with 100 grit followed by 200 grit. And then spray paint. I did find that spray paint took longer than normal to cure in order to pass the finger nail test.

In the above thread you can see the shoulder bells which were plexi and have gone through the whole process as above.

Thanks for the info man! I may give it a try! I do not have a cutting weel, or a bench grinder, but I'm sure the dremel, and sanding it by hand with the paper would work pretty well. I will definantly have to give that a try!

And yes, the pose is very important, nobody likes a stupid-standing Jango!!!

Thanks for the responses guys!

The armor looks like its all touching itself because i was hunched over for "The Pose."

The helmet looks like it needs to be shaped. It looks very thin. I would also paint the end of the Westars copper or gold so they don't look so fake. I have the hasbro plastic ones and I painted the bright orange parts copper.
Last edited by a moderator: Jul 24, 2017
A

Yeah I know, thats the Rubies Jango helmet. Maybe that explains the warped-ness. I'm working on fixing that right now, it's been sitting for about 3 days now with something inside it pushing out the sides so it looks more like Jango. There is a crack on it, so I am prolly going to get another one sometime soon. As for the blasters, I was looking at them just today and ocncidering either cutting off the orange part, or painting it silver. I'd completly forgotten that there was a brass-looking thing on the ends of the blasters! Thanks for the reminder! I'll do that as soon as I get some brass paint. I have some gold paint, but I dont think that will look right. Thanks for the tips!
Last edited by a moderator: Jul 24, 2017
R

Here's a couple links to the master replicas guns, i'm not exactly sure how accurate these are to the real guns. Click on the enlarge for a better pic.

Not one of my sets off EBay thank God. I have my pride.
Click to expand...

No, it wasnt you. If anyone was wondering it was "barefist". No offense to him if he is a member here or happens to read this, but the armor is just not right.
Last edited by a moderator: Jul 24, 2017

Did you mold that back plate yourself? I think with a heat gun and a trustworthy friend, it can be corrected.

Despite my armor critique, you've done an awesome job with what you have. Great looking suit overall.
A


Jodo_Kast wrote:
Did you mold that back plate yourself? I think with a heat gun and a trustworthy friend, it can be corrected.

Despite my armor critique, you've done an awesome job with what you have. Great looking suit overall.
Click to expand...

The backplate came with the rest of the armor when I purchased it all from "barefist" on ebay.

What do you mean by a "heatgun"?