My HS jetpack - in progress

Hello all! I got my jet pack in the mail today. I bought it second hand, but it's only been primered.

Fett hunter identified it as a "GoldenArmor" pack. Upon first inspection, it looked like a terribly daunting task was ahead of me, but upon further investigation it only looks like there are a few problem areas with my pack.

The first is the rocket. Whoa. Dang. The rocket came in two pieces, no counting the base. There was no included method for attaching the two pieces, so if I wanted to assemble this I'd have to find a way to bore both pieces out and insert a rod. But the whole rocket is shaped so oddly that I just want a new rocket. I was initally thinking I could get a lathed wooden rocket, but if there are any "default" alternatives to the GoldenArmor rocket, I'm open to suggestions. I'm *hoping* for a one-piece rocket if possible.

The second was that this pack was filled with expanding foam. This isn't as much of a problem as it is a severe inconvenience and set-back. I'm gonna have to carve it all out so I can install the parts to this thing! I only really plan on carving it out where I need to get in and screw parts in and bolt in the harness system, but I'd like to take much of it out anyways. Then once everything is nice and secure and epoxied into place, I plan on going back in with some more expanding foam, but not nearly as much as there is in there currently.

Third is also sort of a set-back, and that's the nozzles. They are a solid block of resin. So I'm gonna have to carve out some of the bottom of it so it looks right, but I only plan on going like an inch into it.

I'm going to want some metal parts for it, mainly the stabilizer and beacon parts. It came with resin copies, but I don't like how fragile they feel. It also came with some knobs and misc buttons. What are those for? 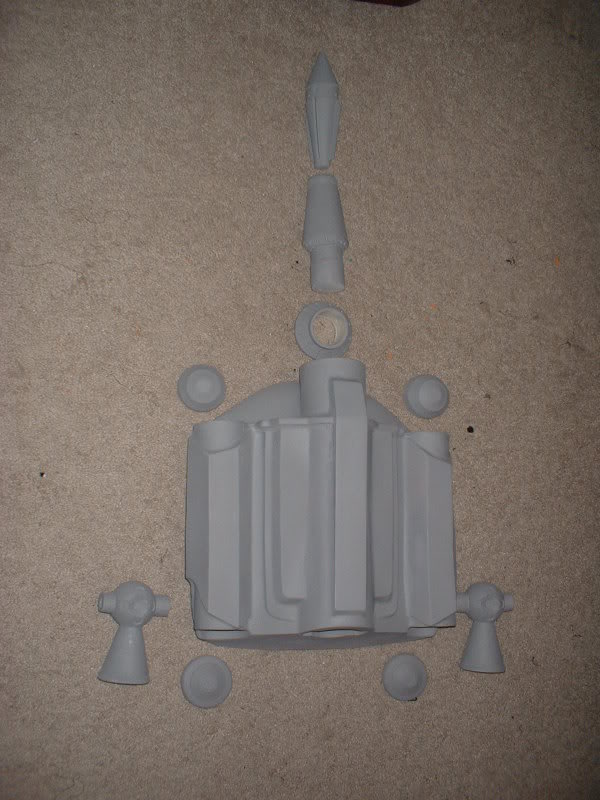 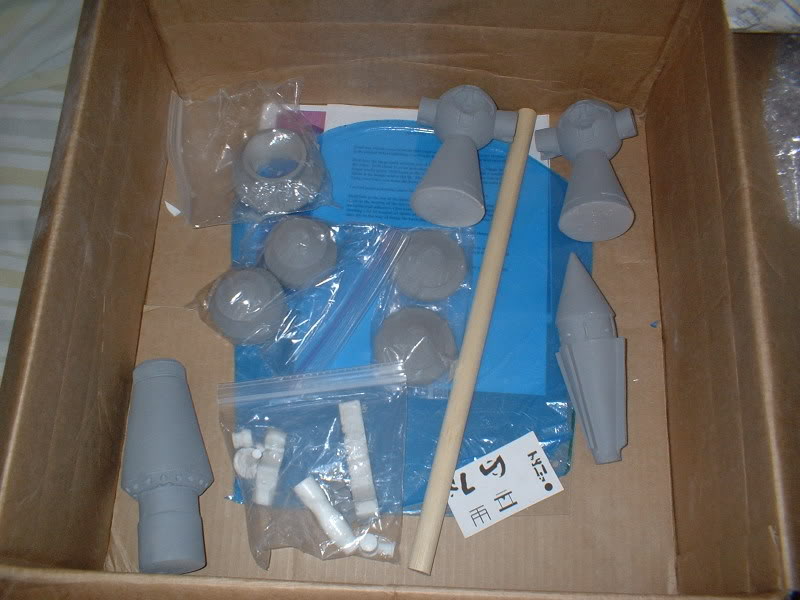 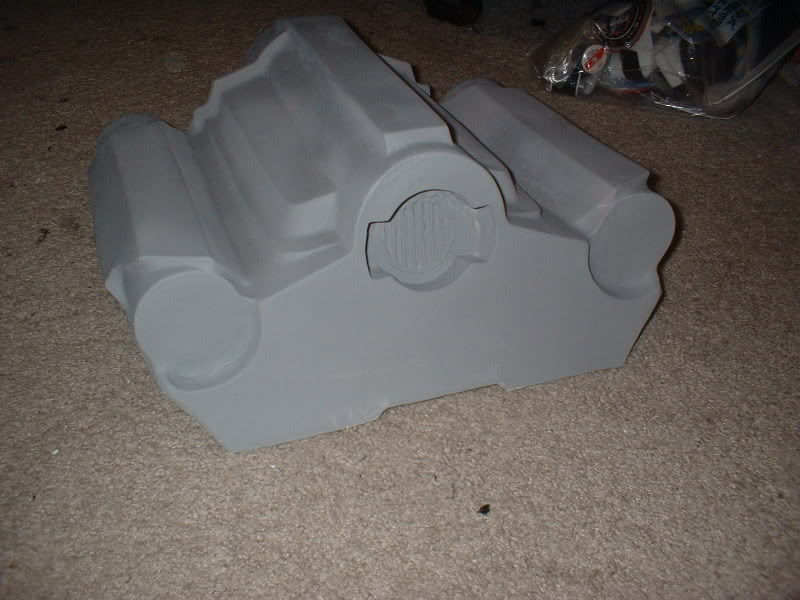 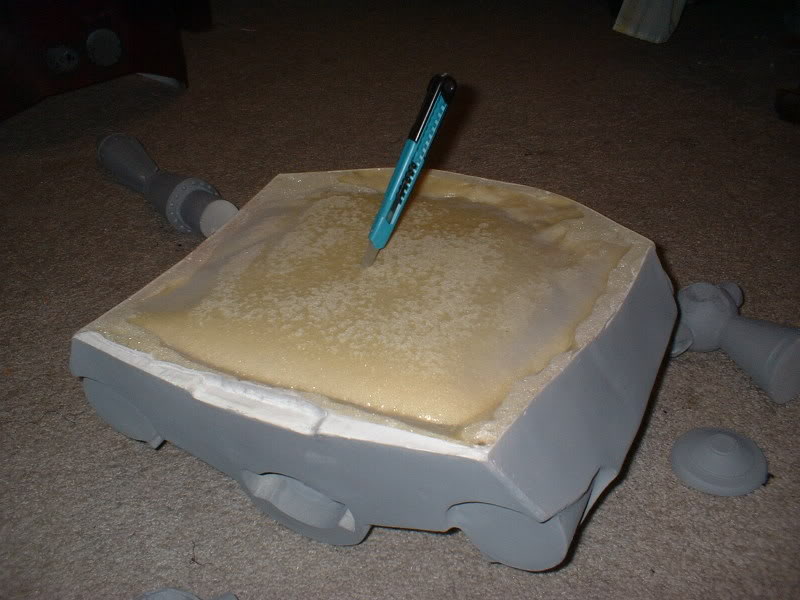 Can't wait to see this thing painted in the HS scheme!
Last edited by a moderator: Jul 24, 2017
B

Looks like you got the optional 'whoop your kids' dowel in there! I look forward to seeing your progress.
Last edited by a moderator: Jul 24, 2017

looks pretty kewl. you could try bondo'ing the rocket together, that's what i did with my vac-formed one, and it worked well. mine was pretty light though. another thing you could do is get a powerdrill with a long thin drill bit to attach your rod thingy into the rocket.

A easy way to get the foam out is to dremel it in layers, and maybe you could reuse the foam or something.
Last edited by a moderator: Jul 24, 2017

I have that same model. Start hacking all that foamy stuff outta there. I made a small channel around the perimeter just inside the edge and poured some resin inside so I had an edge to glue or screw the back onto.
Last edited by a moderator: Jul 24, 2017

how much do u want for the rocket if you're not going to use it?

Chaucer's reputation is obviously very hit & miss, but I've had one of his packs finished for several years, and I'm very happy with it. It can be an extremely nice pack if you put the proper care into building it. I've never felt the need to upgrade from it...

Yeah, that's definitely something I'll be wanting to upgrade to. I at least want a metal beacon and light for this thing.. something a little more sturdy than the resin parts that came with it.
Last edited by a moderator: Jul 24, 2017 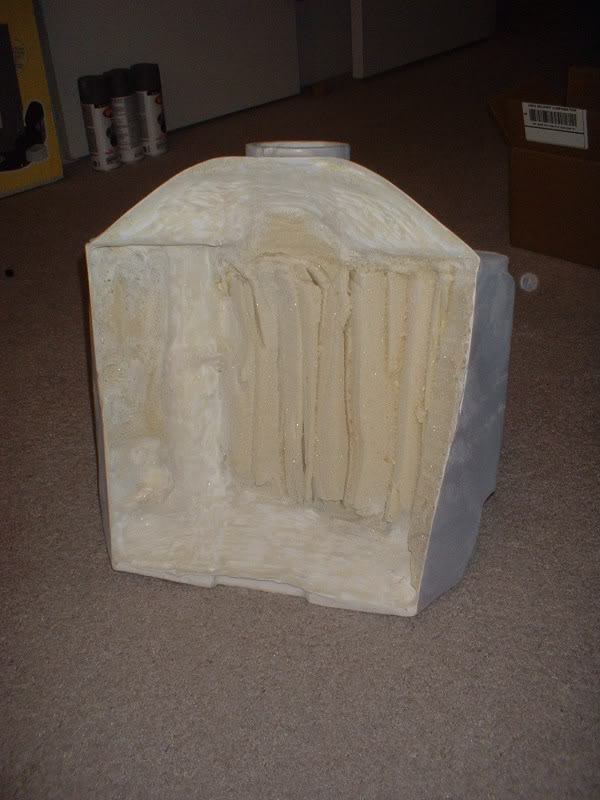 I've been working on carving all that foam out of the pack today. I started by cutting out the first layers with my gigantic razor, but then switched to the dremel when I started hitting fiberglass.

I'm going to leave the foam that's in the center where it is. I don't need to carve it out really, and I'm going to be putting more foam in it anyways, so I'm mainly just carving out the side tanks. I'm about to go finish it up, shouldn't take more than an hour.
Last edited by a moderator: Jul 24, 2017

Well I got it all carved out, and I went ahead and drilled the holes for the dowel that will hold my rockets on. 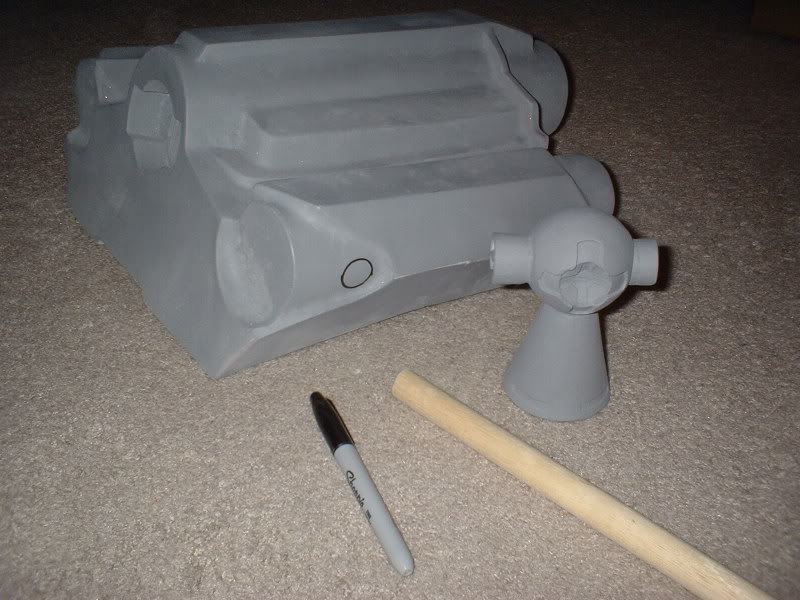 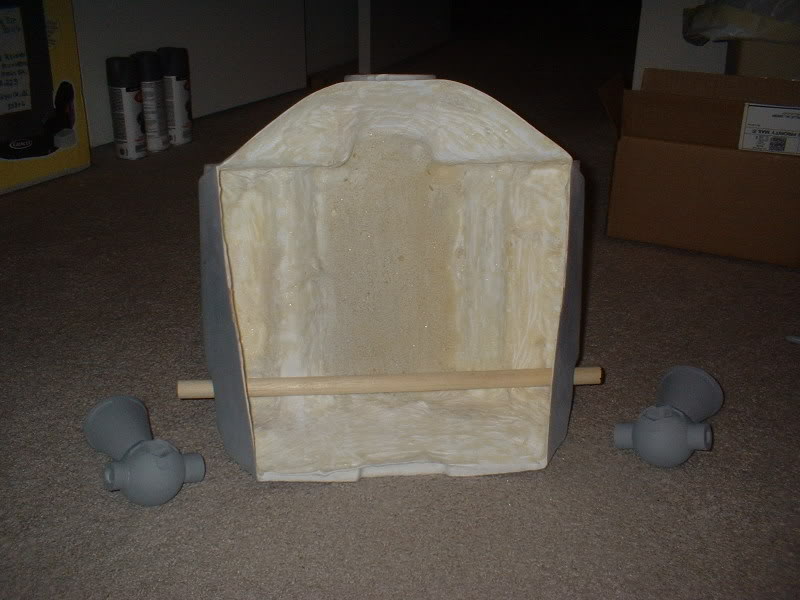 Also, this pack came with a large piece of plexiglass for the panel that will cover the insides. I have no intention of making this an accurate pack as far as the unseen areas go, so I was thinking of making a hinge for it at the bottom, with two cabinet magnets at the top to keep it closed. I'd be able to open it and adjust things as I see fit that way. Anyone else tried this with any success?
Last edited by a moderator: Jul 24, 2017

It's been a while since I've updated this thread. I've done some extensive work to the pack over the past two days.

First I closed up the back semi-permanently. It's not pretty, but it's my first pack, and it does the job well. I still have a few minor things to finish up on the insides, but that reall can wait for a while. 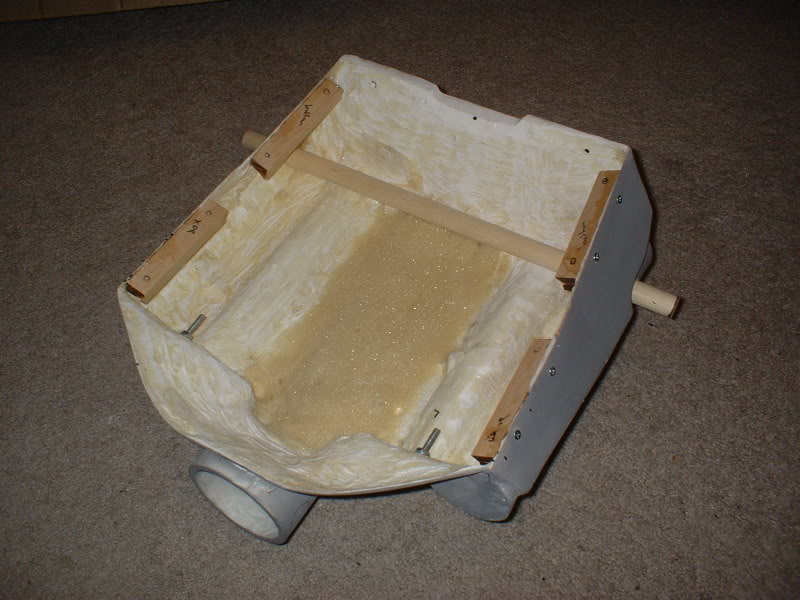 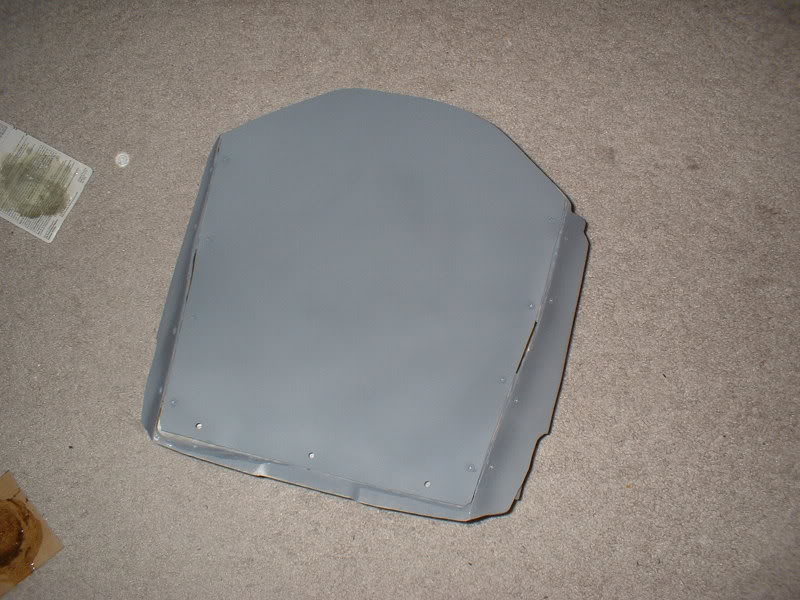 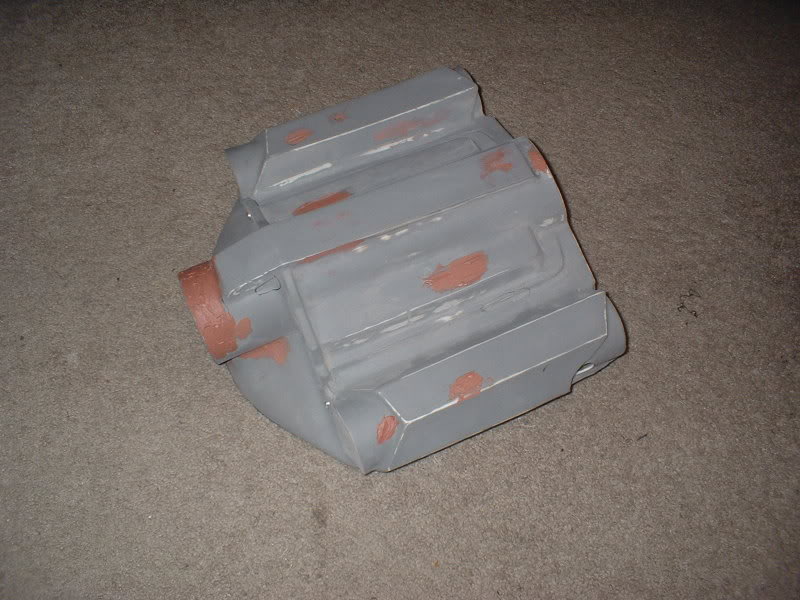 The tank tops and bottoms were glued into place, bondoed, smoothed over, sanded, and then I just now primed the whole pack: 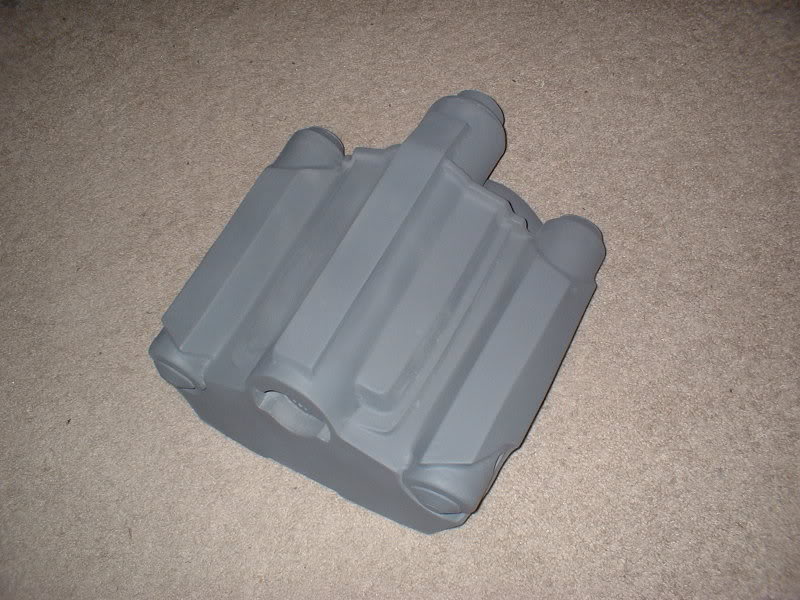 I'm gonna start painting it later today. I'm gonna try my best do to some of the major paint chips with the mustard technique, but it looks like most of the minor weathering and such will have to be topographic.
Last edited by a moderator: Jul 24, 2017

I put together and painted one of those exact packs a while ago.They are a bit heavy, and I did not use the plexiglass.Seemed to fragile, I put a sheet of metal on the back.
Turned out pretty cool though.I have some pics of it somewhere.Got to look for em.
Last edited by a moderator: Jul 24, 2017

Ok I got this baby painted up today, but I'm still working on the extensive battle damage. I'm so impressed by his weathering, that I'm mimmicking DarthMiller's battle damage on his ROTJ buildup for this jet pack. I'm actually trying to do get all the detail he has on it. 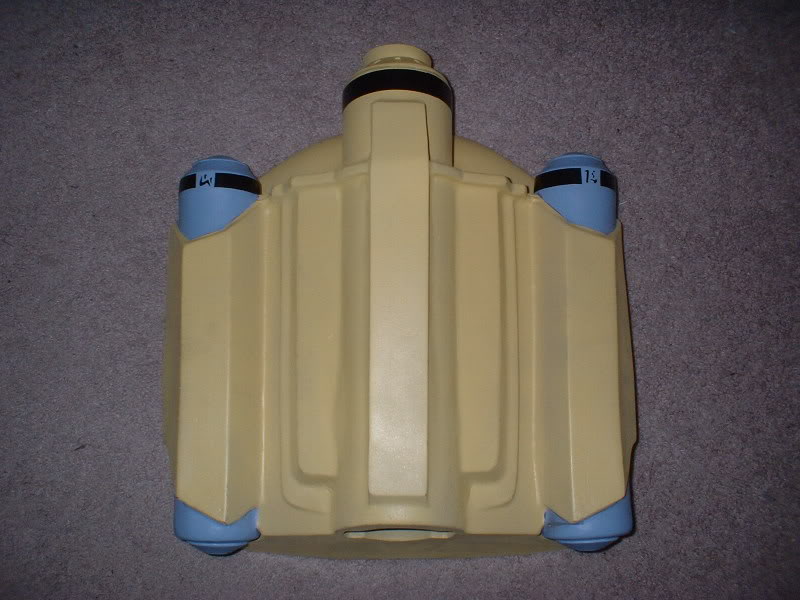 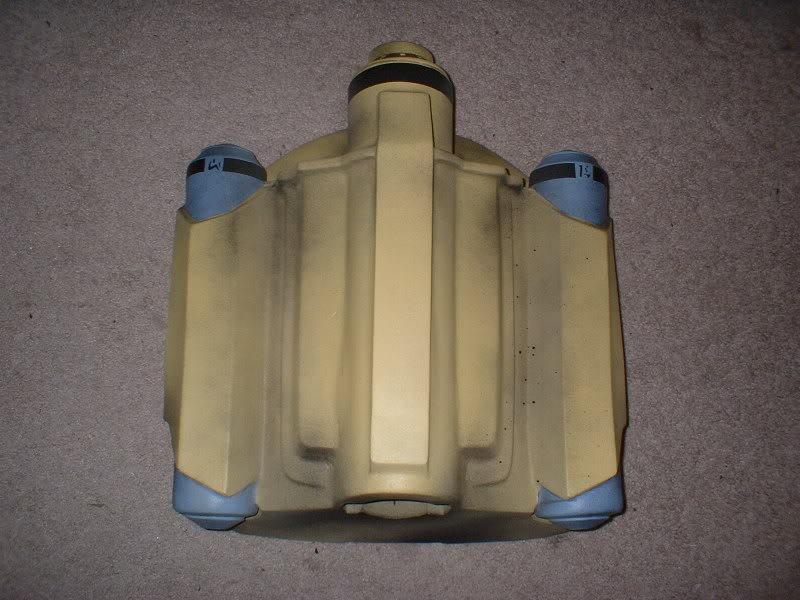 For the damage, I'm going in with a Micron inking pen and drawing out all the paint chips and scratches, and then I'm painting it in with silver paint. 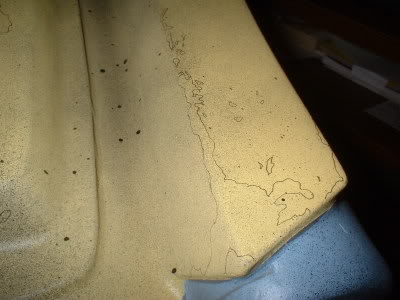 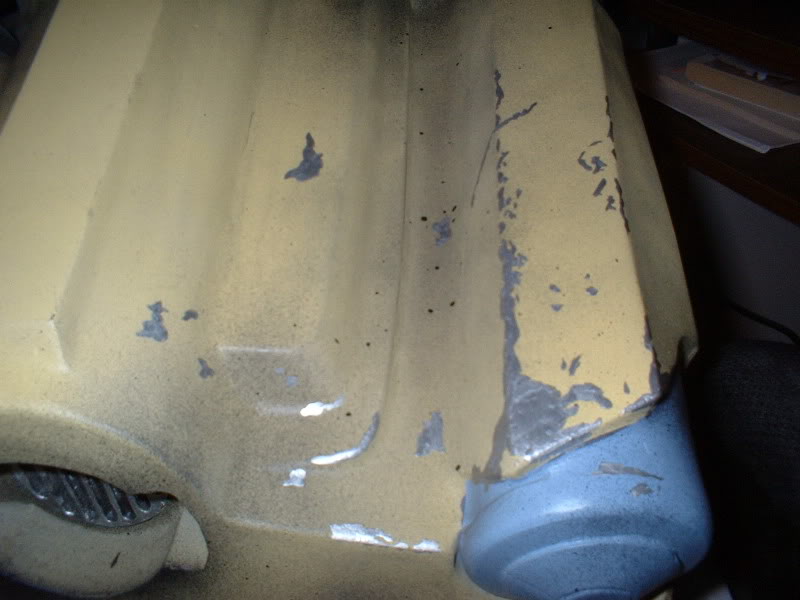 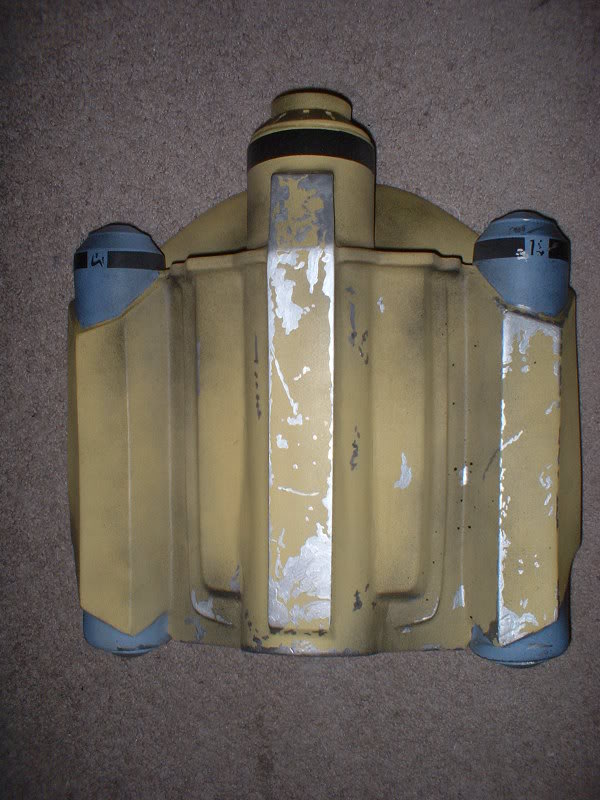 The paint is done topographically, and I'll be smoothing everything out with one of those sanding sponges when it's all done to smooth things out.
Last edited by a moderator: Jul 24, 2017

Ohhhh man, this is such an awesome project! I love what you've done with it so far.
Last edited by a moderator: Jul 24, 2017

Well I've finished the weathering on the main body. I'm debating whether or not to put the beacon and stabilizer on it. Leave them off for a simpler look, or put them on for a more realistic look (which would fit the project). I dunno though.

I've thrown in the painted (yet unweathered) thrusters for effect. 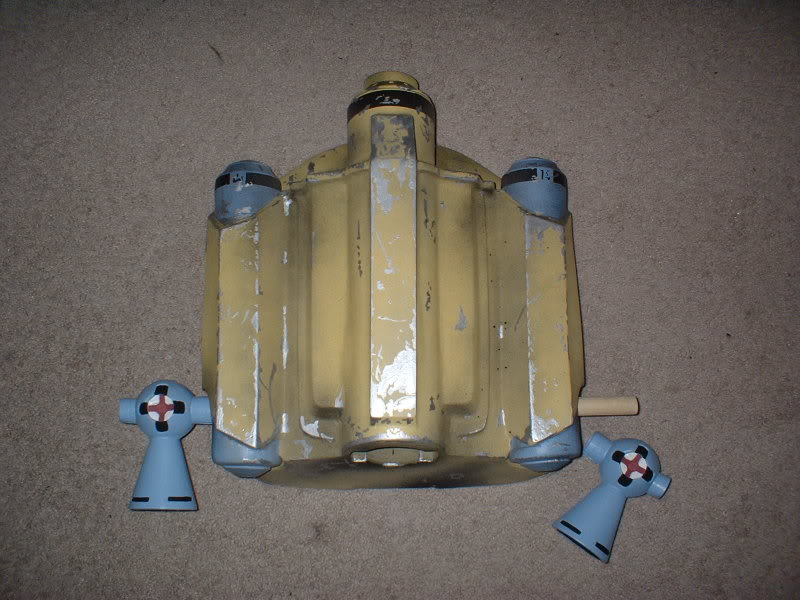