Hey guys,
I have to ask this before I change my skull on my shoulder bell.
But the Mando skull is different on the ESB then ROTJ? Or am I just seeing things. :confused
Its closed off rather (attached to) than gaped from the main body of the skull.
Can somone confirm this? Because if so I have a ROTJ rather than an ESB skull and if so who does an ESB decal?
You know I guess I've just seen the seperated version for so long I just assumed they were one in the same, all these little things can make you nutz!!
OH man this sucks, I feel as though I will never get this finished. I keep finding lettle things I still have to do.
On a side note:
Not to bash CABOOTS but I ordered boots at the end of August and still have not received them, a bit frustrating!! So I thought I'd throw that out there for anyone who may be thinking or ordering form them. 3 months when they said 8 weeks. I know, before you say it....we all wait.
christi

crazy4BobaFett said:
But the Mando skull is different on the ESB then ROTJ? ... Its closed off rather (attached to) than gaped from the main body of the skull. Can somone confirm this?
Click to expand...

Yes .. they are different.


crazy4BobaFett said:
... all these little things can make you nutz!!
Click to expand...

You may want to try VashDstampede, I think he has both versions of the skull.

They actually vary between Prepro (actually each slightly different but generally the same), and ESB, and ROTJ. Tylerdurden will correct me if I'm wrong, I'm sure.

I threw this together really quick (I drew the Prepro, but not the ESB or ROTJ). The Preopro is really rough but it gives you an better idea of how it looks compared to the others. Freaky, eh? 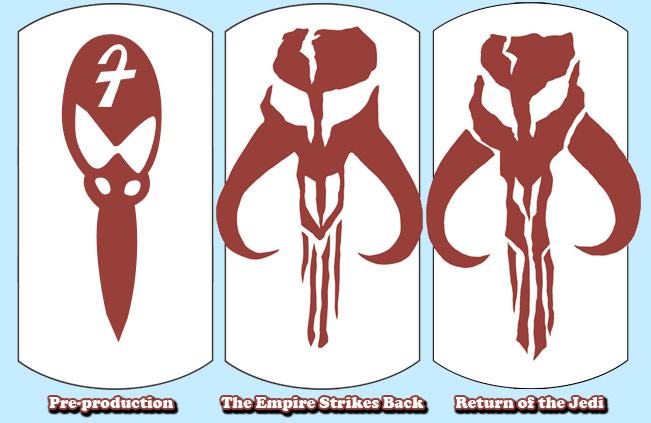 hmmmm... Good eye.. i would of never spotted the difference...

Wow, I would have never caught this. You guys are the walking Fett encyclopedias! Thanks for putting together the graphic Jango_Fett_Jr.

Hey well see I'm even learning from this! I've never seen the pre-pro skull and I personally don't care for it. Yes very Freaky lookin'. and Thanks Jango Fett Jr. for the side by side comparison. I actually was looking at a pic. of Daniel Logan in an ESB suit and all of a sudden it hit me, like a ton of bricks, the skull is different.
But I wasn't mistaken, I have a ROTJ decal, so I need the ESB. Darn!
So VashStampede is the man for those huh?
So anyone need an ROTJ decal? LOL
One question if that is suppose to be an "F" then why is it backwards?
I know Fender's is the same way but... maybe I just see it as backwards.
Z

Looks like Boba got "Howard the Duck". I know I would have paid for that hit.

I feel old now....I remember when this was discovered about 3-4 years ago If I remember correctly "Ego" made the first round of emblems as I think he was the one who discovered it.

That preproduction skull is very cool.