Here are a couple teaser photos of my gauntlets I just finished sculpting. Still working on the bottoms, but I had to share this for now. Pictured on the right gauntlet one of Boba Phett and Fettcicle's amazing resin rockets.
Also I built the hose connector from sintra for now, wanted something I could plug my hose into. I'll post more photos soon, so keep tuned I gotta go, I'm in the process of dying from fibreglass, paint, and bondo fumes 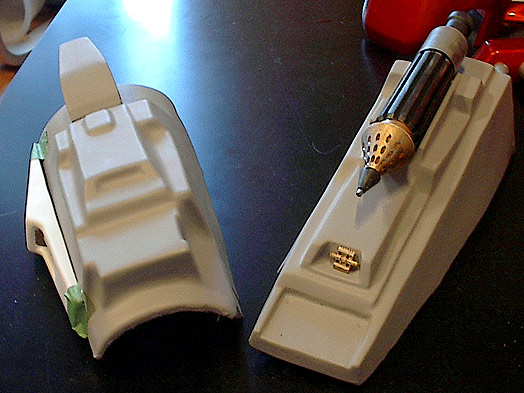 Niiiice! Can't wait to see them finished. I wear an ESB set but it seems to be extremly rare! It's good to see someone not only with a set but actually making their own.

Thats it! Im throwing mine away. Looks real good.

freakin A my friend. I'm very impressed. Looks like we'll have a new source for accurate gauntlets. Tell em how old you are... come on, tell em...

I returned your PM. If need anything else lemme know.

Thanks guys I'll post some photos of the process soon, but essentially I did this (I'm not a master sculptor so forgive my lack of detail in my instructions ):

With a TON of photos from the reference CD pinned up on my workshop wall (a la A Beautiful Mind), I started with the rough dimensions of the main features, on the left one using the rocket as a scale.

Using some sculpting tools I cleaned it up and got it looking pretty close to a gauntlet. After smoothing out as much as possible (not easy to do with plasticine), I vacuformed over my sculpt in really thin styrene. I filled that styrene pull with Hydrocal. Now that I have a nice hard version, I can smooth it out using sandpaper, a dremel, files, exacto knife, etc.

After a few weeks of this, I finally go to the point where I was happy with them. I pulled the left one in .06 to capture as much detail (I'll get some done in FG later as per the originals), and the right one in .08. I made the side piece of the right gauntlet using sintra and a pen, and vacuformed over that. I made the gauntlet connector from sintra, making sure the end was wide enough to fit my hose. Once it was all smoothed up, I filled it with fibreglass resin and covered my hose with vaseline (mind OUT of the gutter!). I stuck the hose in the connector and let it dry, when I popped it out I had a solid connector, with a little resin rod formed on the inside that lets me plug the hose in securely

Hope that helps give an idea for anyone else who wants to start making their own parts!

Hmmmm I don't know. I think you need to send me a set so I can be sure. LOL

Great work on those dude!

I like the new take on the hose attachment!

Thanks guys
No luck finding aluminum around me, so I just used some wooden dowels to replace my old flamethrower. It's not perfect, but it will do till I get a machined one. And you can see why I REALLY needed to upgrade it before C3! Still need to paint it and do a little minor work, but here it is: