OK, this is more of a "How did I do, guys?", as opposed to "Here's a revolutionary, realistic looking, and easy technique for your armor". And there are a ton of pics. Could I turn everyone off of checking it out more? 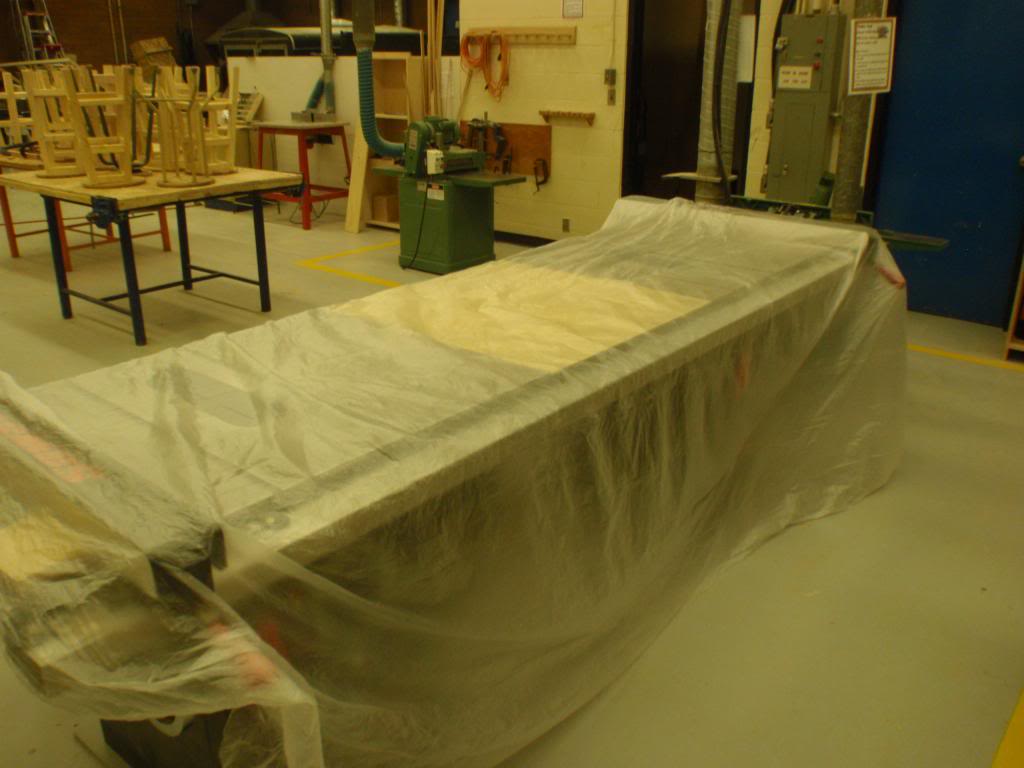 No, it's not an episode of Dexter. It's my 'dropcloth' draped over the school table saws. 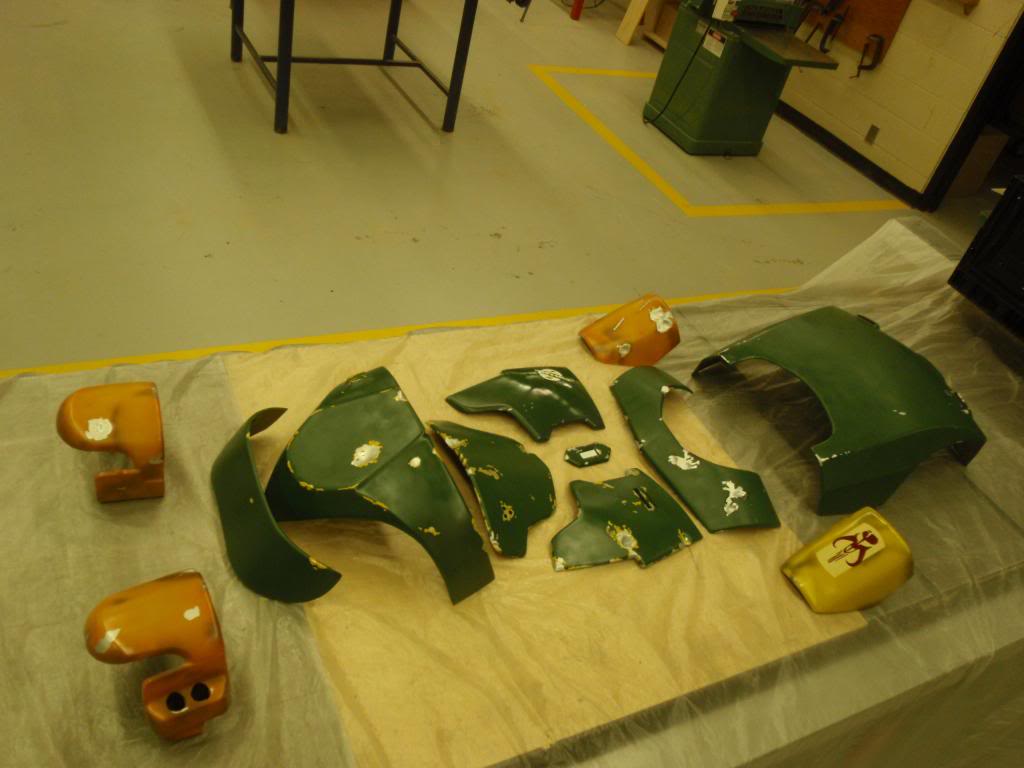 Here's my armor. It's RKD's vac-formed Boltaron & ABS armor, and painted using RafalFett's ESB stencils. I applied Dupli-Color's adhesion promoter before priming with a no-name-brand basic primer. After it dried, I used Tremclad Silver as my metal base. Next step was to mask off the silver damage areas using Rafal's stencils and Winsor & Newton masking fluid. Step 3 was the yellow damage. I used Humbrol 154: Insignia Yellow for the yellow, shot through an airbrush after masking. The green armor color I used was Testors' Model Masters Euro Dark Green FS 34092. I then clear-coated it with Minwax polyurethane gloss clear coat. If it's tough enough for your kitchen, it should be tough enough for trooping armor.

I'm no expert, but if I had results that good I would be very pleased with myself.
N

Umm... I'm just getting started!
This is a weathering technique I got from Mig Jiminez, weathering guru for scale armor and tank modeling. It works very well for 1/35 scale tank and armored vehicle models. Being a suit of beat-up armor, let's hope it translates to 1:1 scale stuff too. 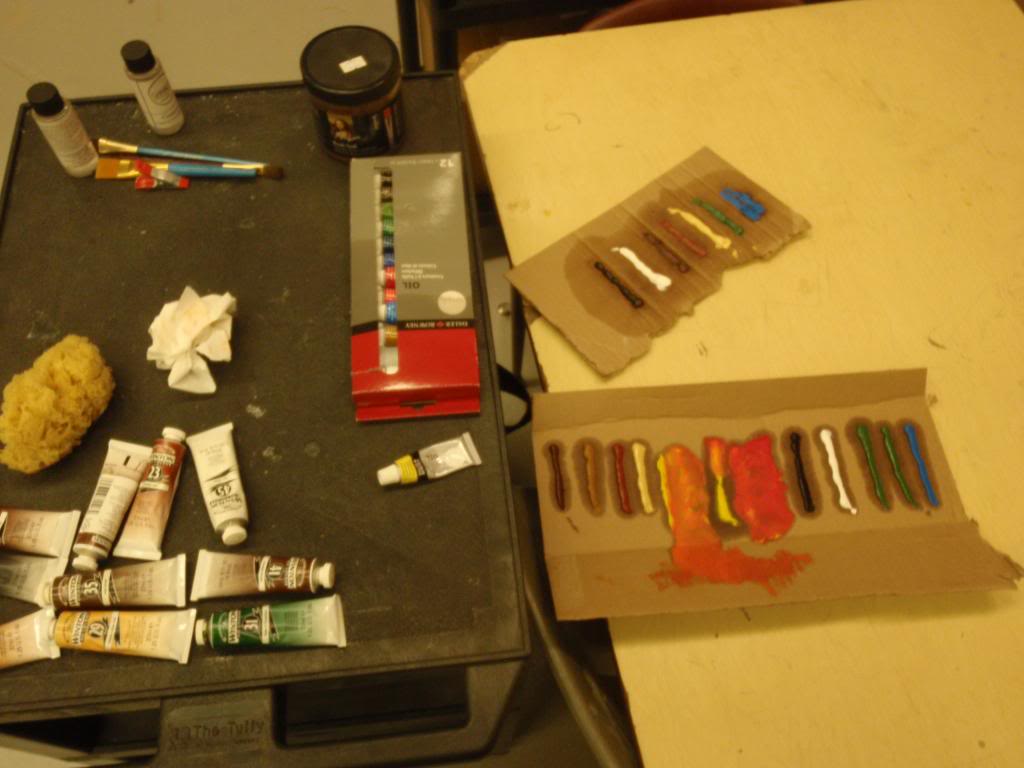 Get some oil paints. Squirt out some oil paint onto a piece of cardboard and let it sit for a couple days. The thing that prevents oils from completely drying out is the linseed oil. Letting them sit on cardboard for a couple days will let the linseed oil absorb out of the oil and into the cardboard. This should reduce drying time to a couple of days.
Why oil paints in the first place? Depth. Whatever you do with oil paint tends to have a thick, rich, and deep look to it. Acrylic paints and washes tends to have a thin, washy and translucent surface-level character. IMHO, anyways. 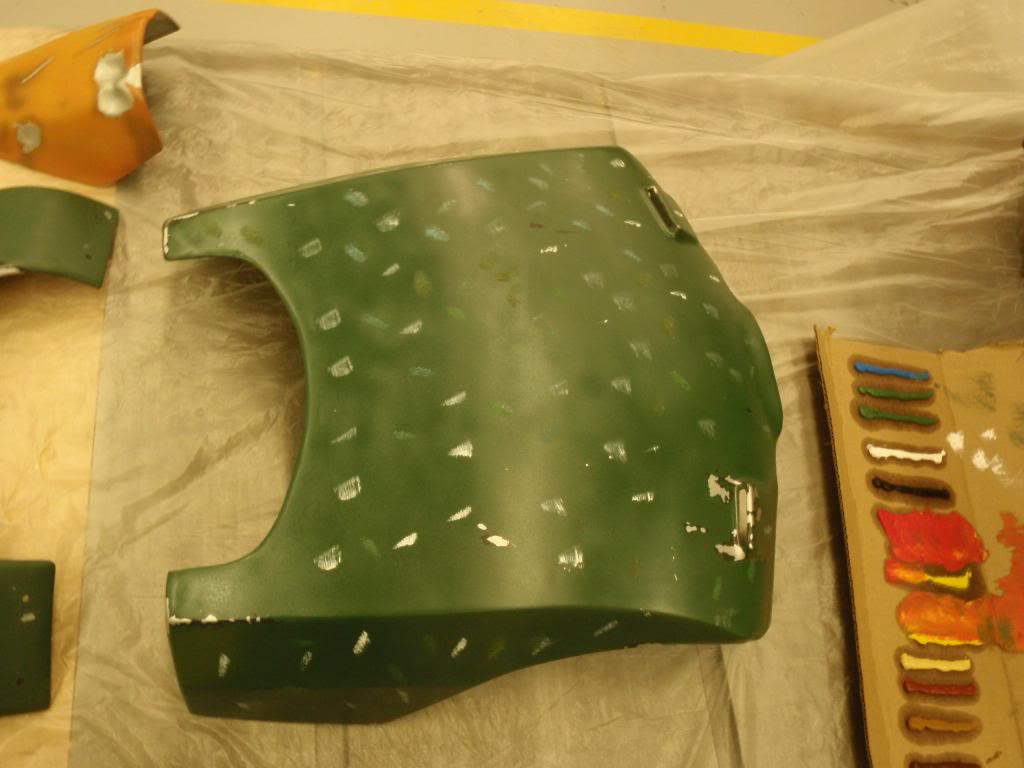 I applied a bunch of white oil paint to lighten up the dark tone of the recommended Euro Dark Green because it still looked too dark to me. Mixed into the white oil paint was a little random primary (red and blue) and tonal (white, brown and yellow) colors. These random colors are simply to add a little richness and tonal variation to the overall green paint. Using all the white oil paint, I intend to turn this into a transparent 'filter' to just slightly shift the overall color of the underlying Euro Dark Green to make it a little more 'mint' colored, according to reference pics.
N 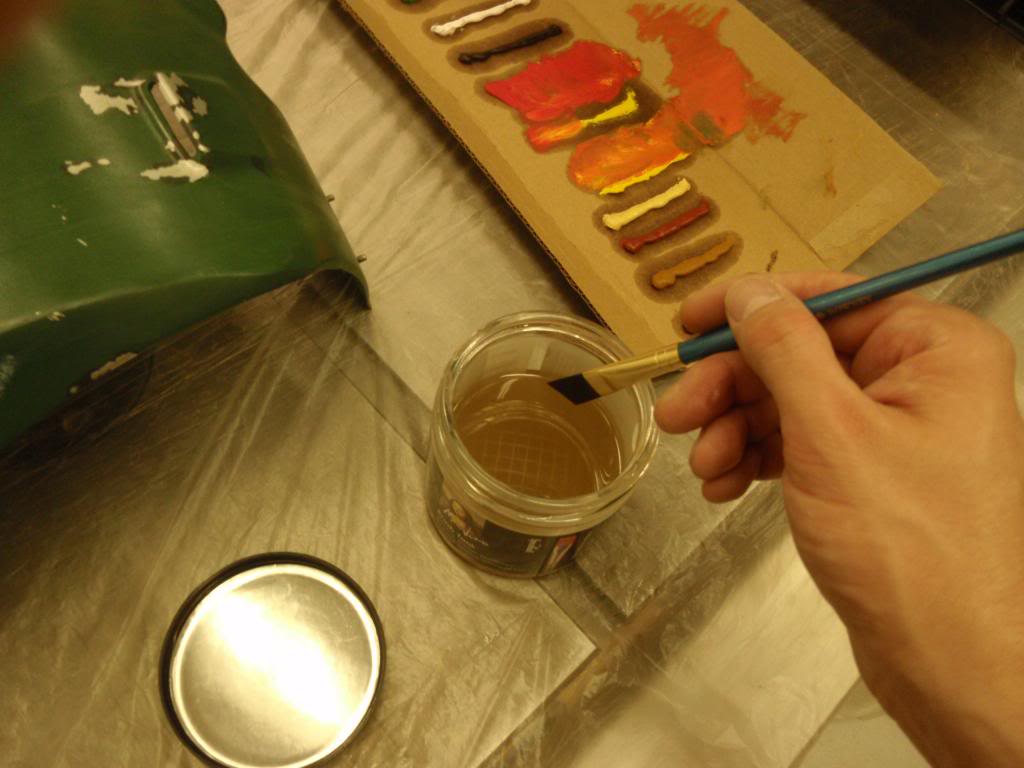 Using a little turpenoid or your favorite oil-based paint thinner, load your brush. Squish most of it out along the sides. 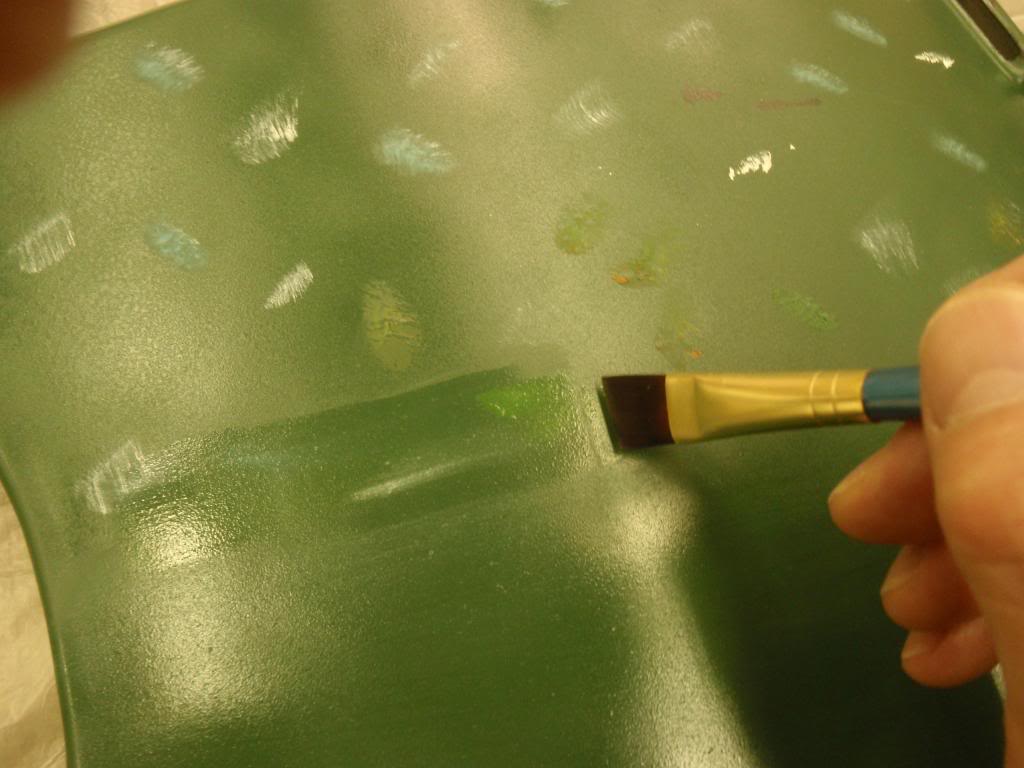 Brush the thinner up and down, dissolving the oil paint as you make your brush strokes. It should make nice, translucent, and streak-ish brush strokes. Think of it as rain streaks running down our beloved bounty hunter's armor. 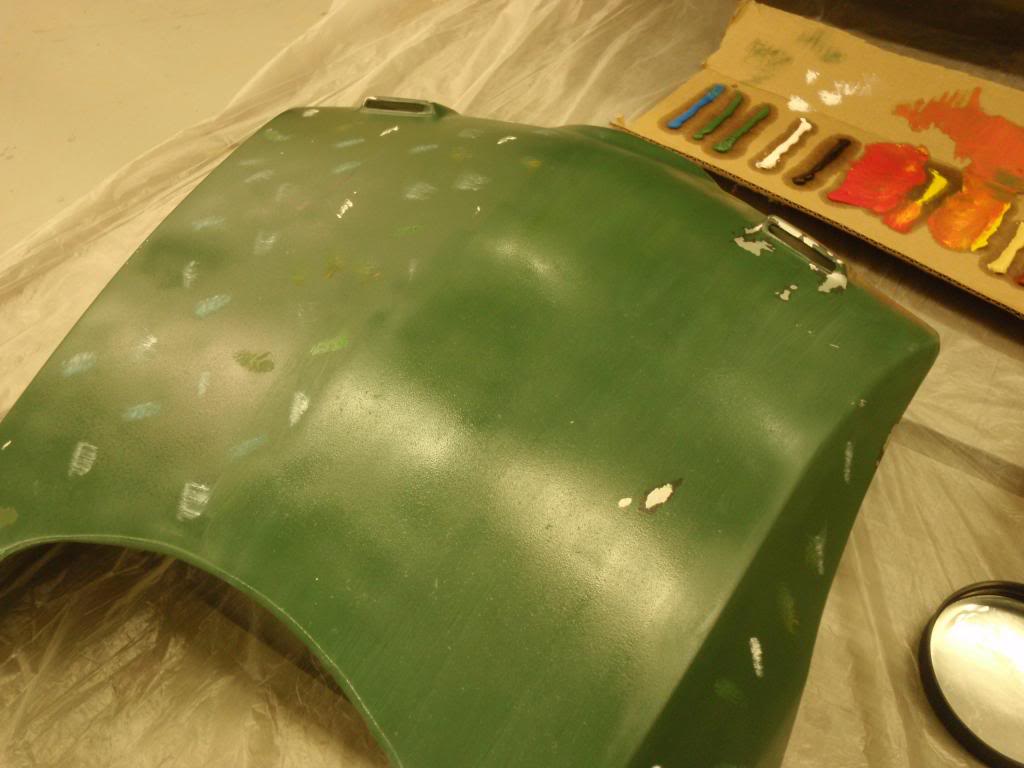 This is the streaking and paint oxidization effect I am going for.
N

Here it is again. 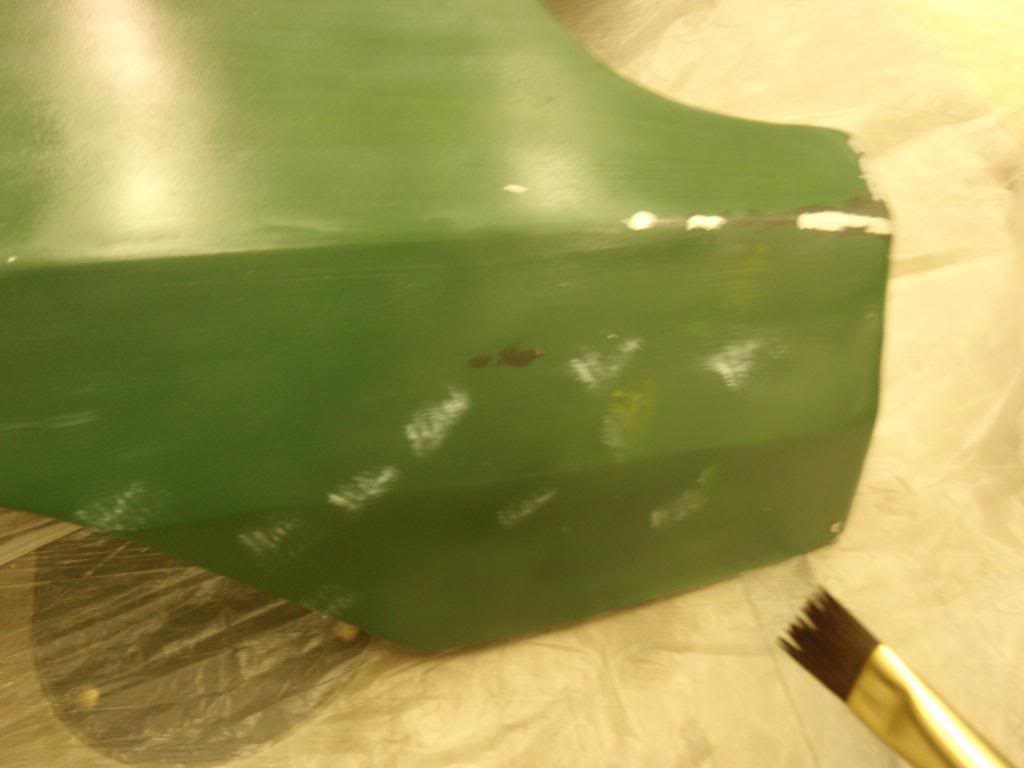 Oil paint is dabbed in bits of white, blue, ochre, etc. The colors are up to you. More colors = more tone, depth, and variation. I stayed with mostly white, using equal parts of red, blue, yellow ochre, black, and something like British Racing Green to offset and enhance the overall effect. Remember, my Euro Dark Green was feeling a little to dark, hence the large dabs of white. 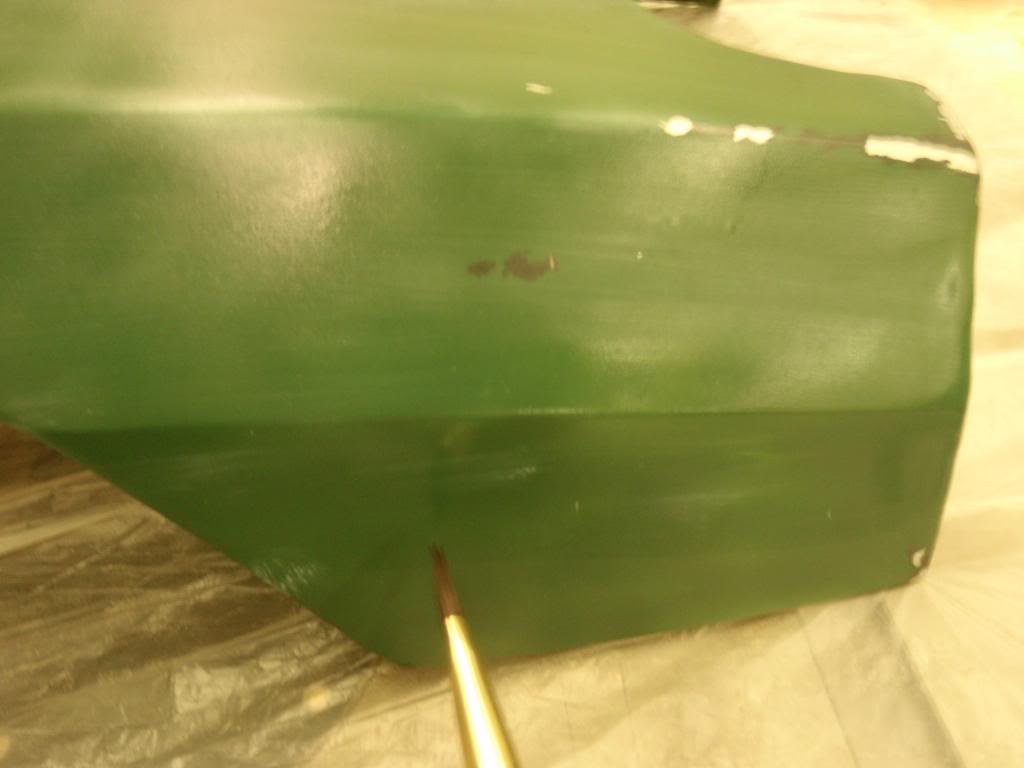 The up-and-down streaking effect with the thinner creates the illusion of oxidation and rain marks in the paint. I will add the more specific weathering marks later on with pastel chalk.
N

Once more for the gifted.
Before: 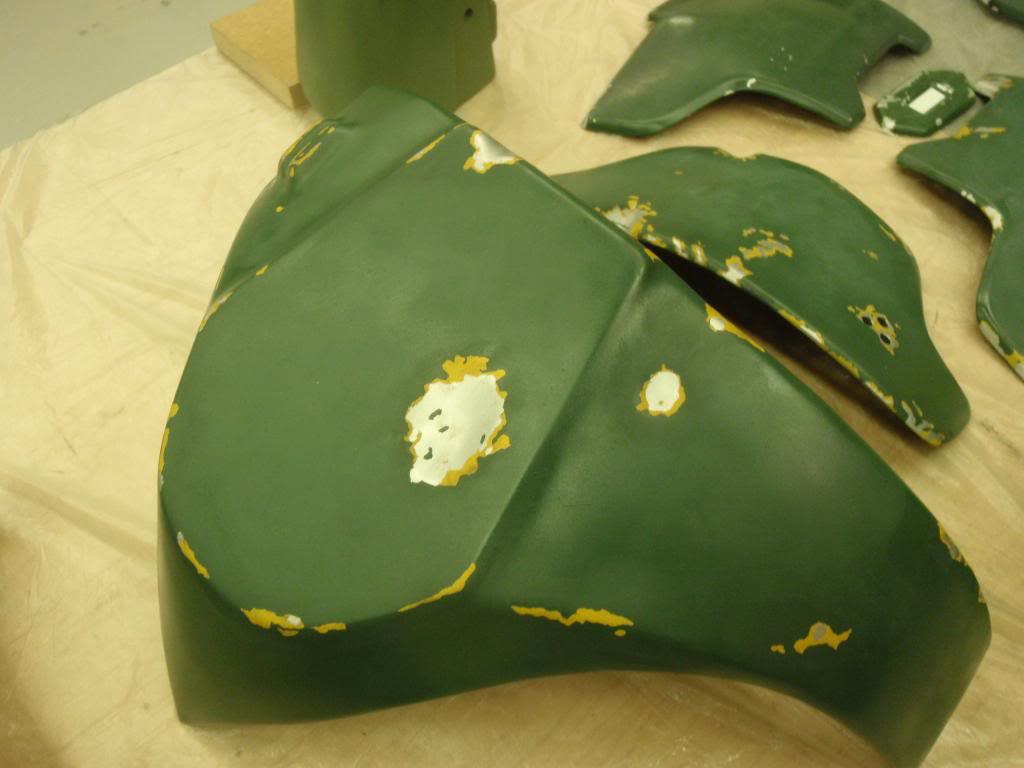 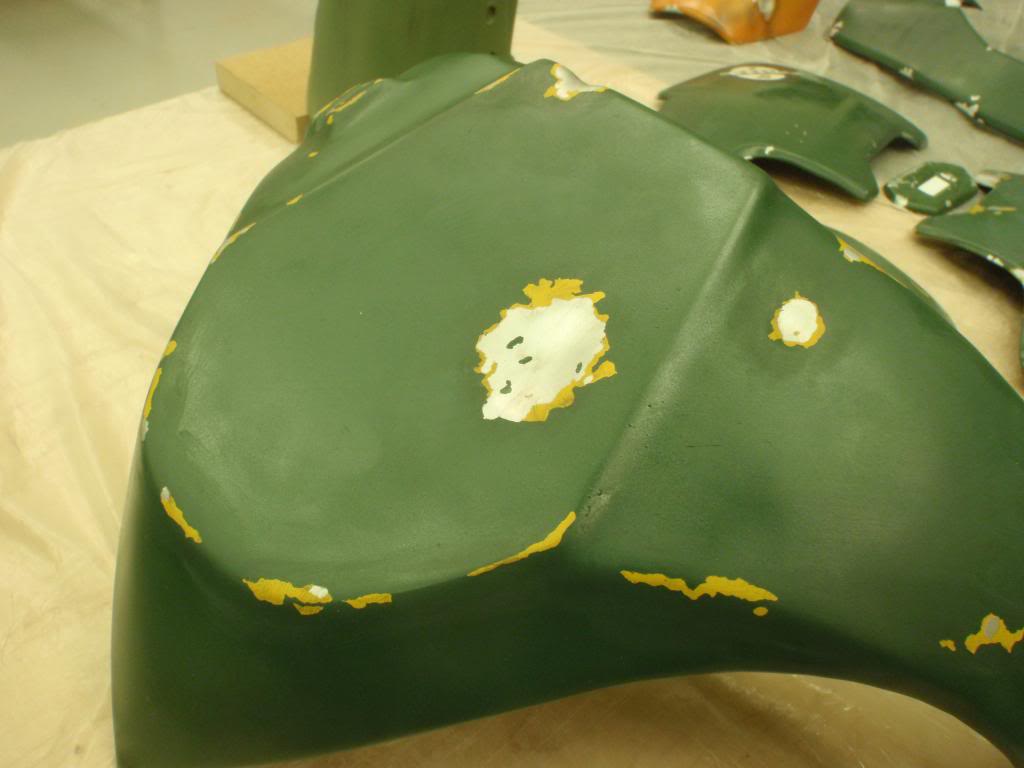 I will admit that it's subtle. However, the '40 foot rule of film' doesn't apply with real costumes and suits. An overall wash of a light or dark color over most or all surfaces ought to shift the tone of your armor. It should add a more realistic look to any one's armor.
Last edited by a moderator: Jun 26, 2013

Wow! You did it again! Great looking armor with a great looking paint job! The second base color is definitely better than the first and the weathering is awesome! Keep up with the great updates!
N 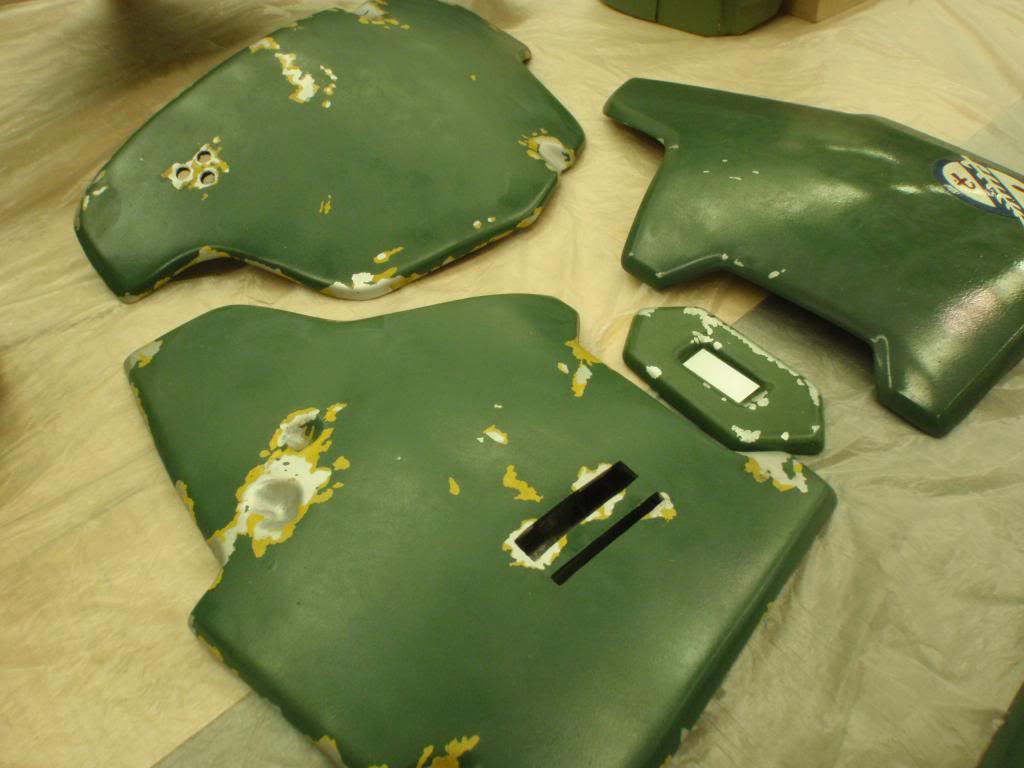 Here's a shot of the chest armor. I applied a lot of white in the middle, and tended towards black in the yellow chip and dent areas. The center diamond got just the tiniest bit of black around the edges. 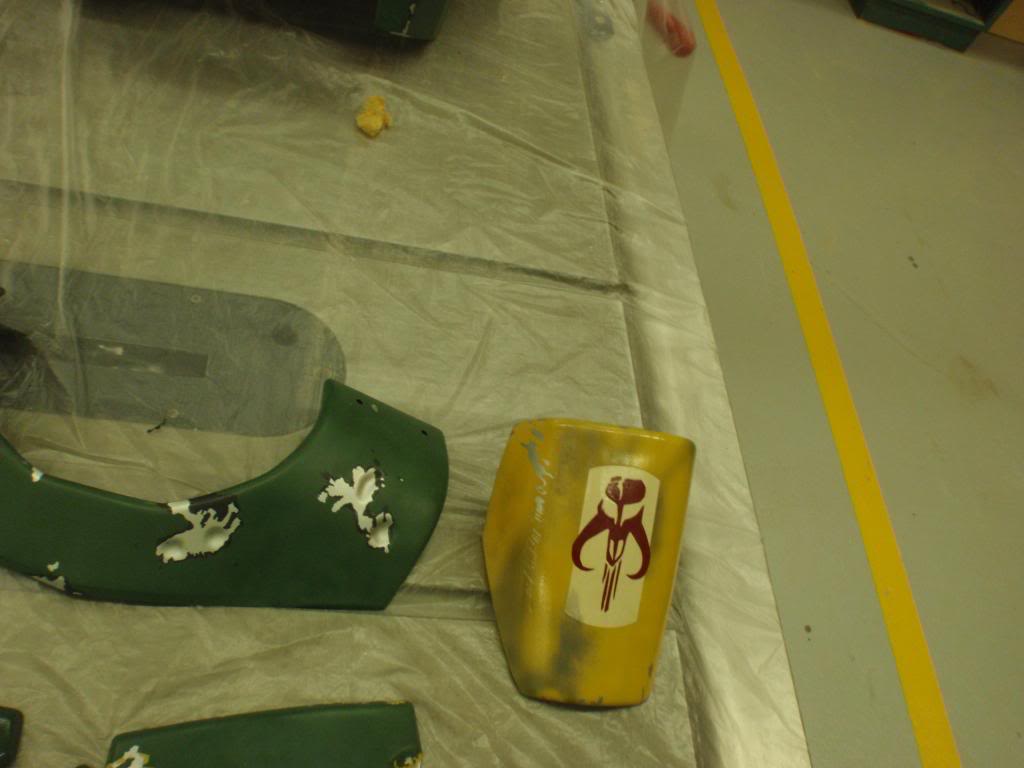 I wasn't completely finished painting this side of the shoulder armor when I clear-coated. I was missing the bits of gray that are showing on top of the yellow and the insignia (from Lucksy31). The gray streak on the bottom left and the gray weathering on the top left of the insignia is all black and white oil paint. 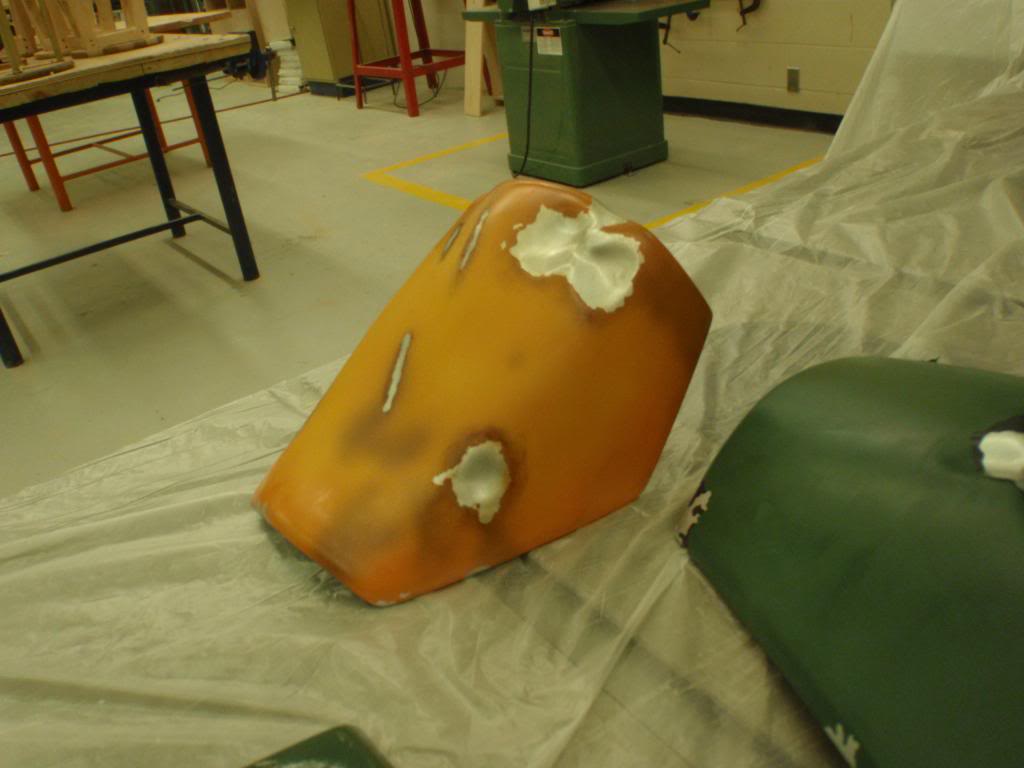 I added mostly yellow in the lighter parts of this piece (and the knees too) and used burnt sienna to enhance the darker parts. 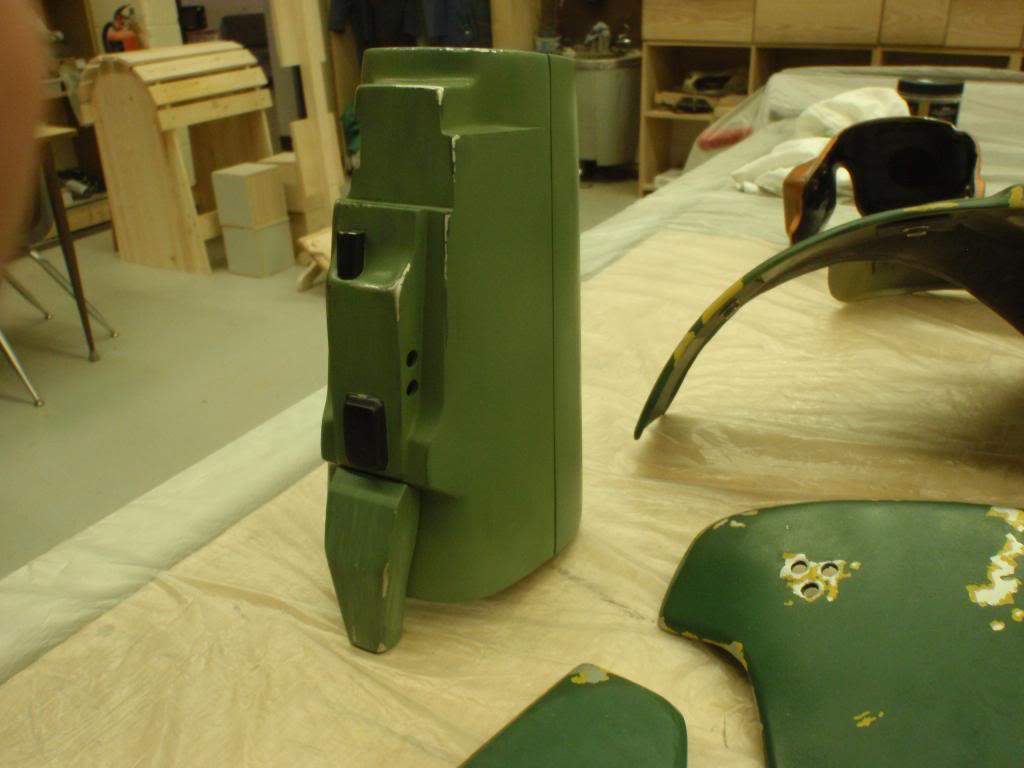 For the gauntlets, I applied a thin wash of burnt sienna only. It's most apparent in the recesses. 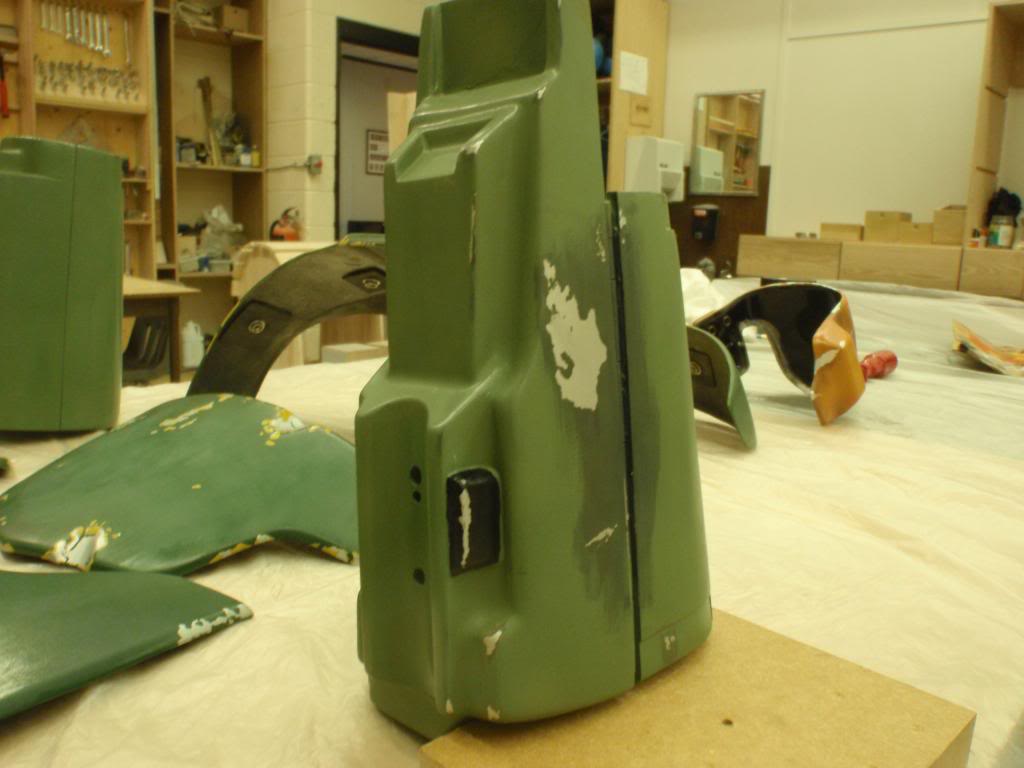 The oil paint did take about two days to dry, exactly what it should take. After it had dried, I sprayed a layer of Minwax satin polyurethane clearcoat and let that cure for another 3 days. 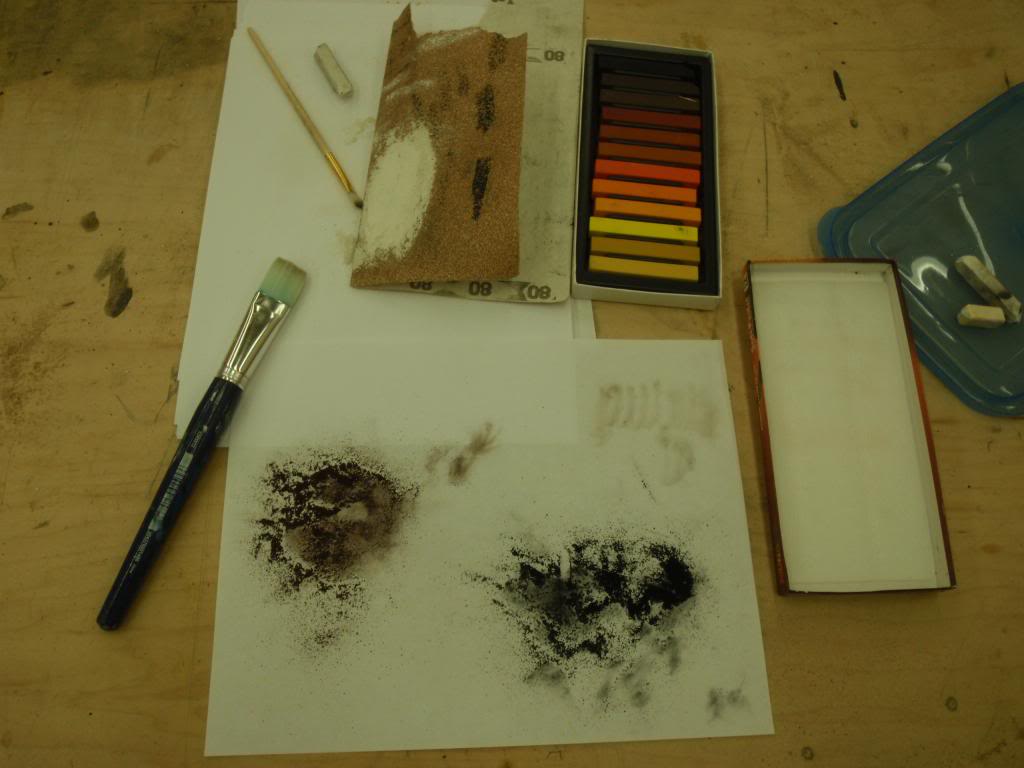 I took some black, white, and brown chalk pastels and ground them into a powder. Using soft brushes and only the smallest amounts of pastel, I further lightened and randomized the tone of the paint. 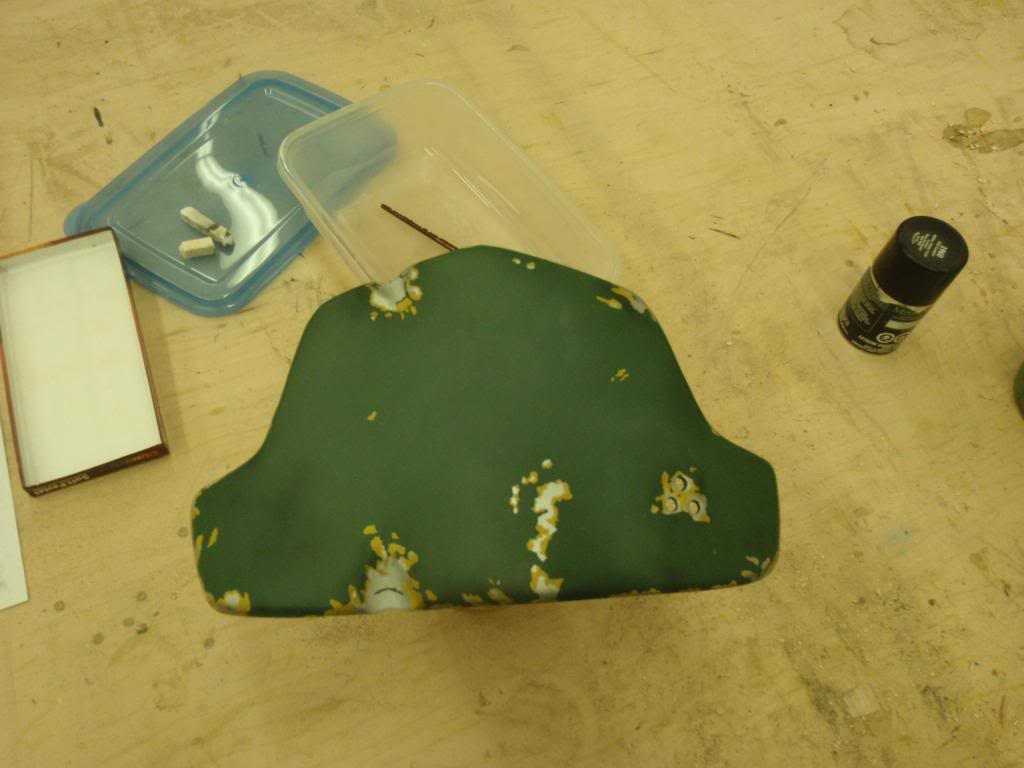 Using reference images as best as I could, I applied a little more white pastel in the middle parts of the armor, black pastels around the yellow chips and edges, and a mix of black and brown for the obvious darker weathered parts and 'blaster burns?'. 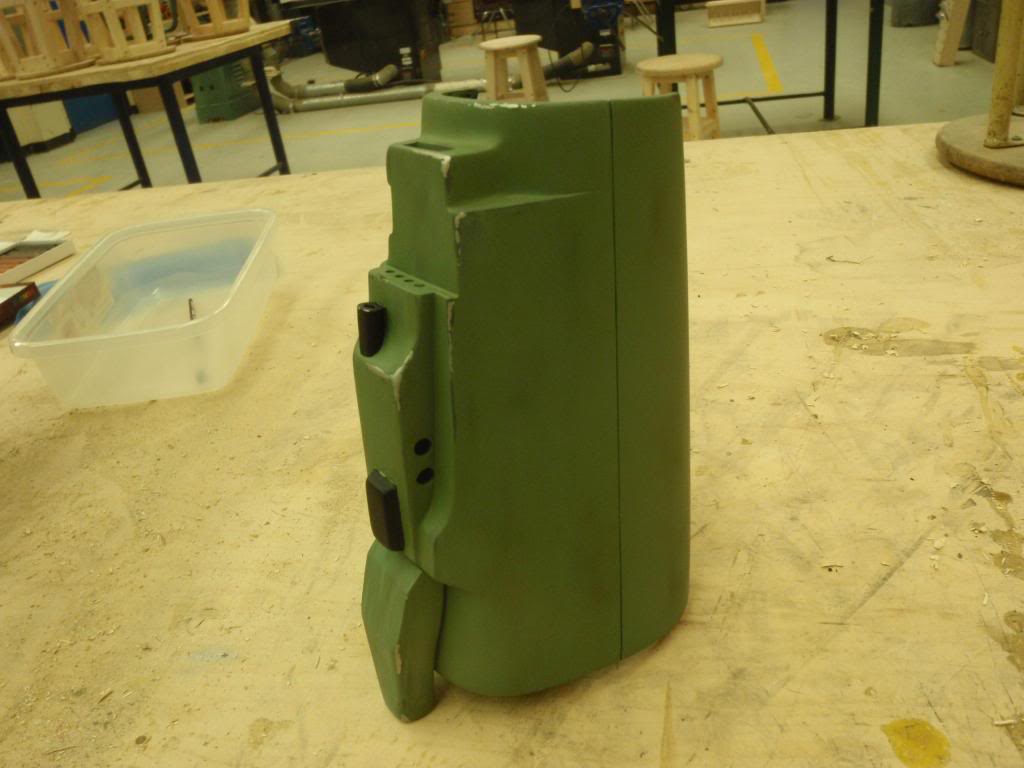 On the gauntlets, I used mostly brown to acheive the slightly mottled brown spots on the gauntlets. I also applied a little black in streaks to mimic the look of old scrapes and rain marks. 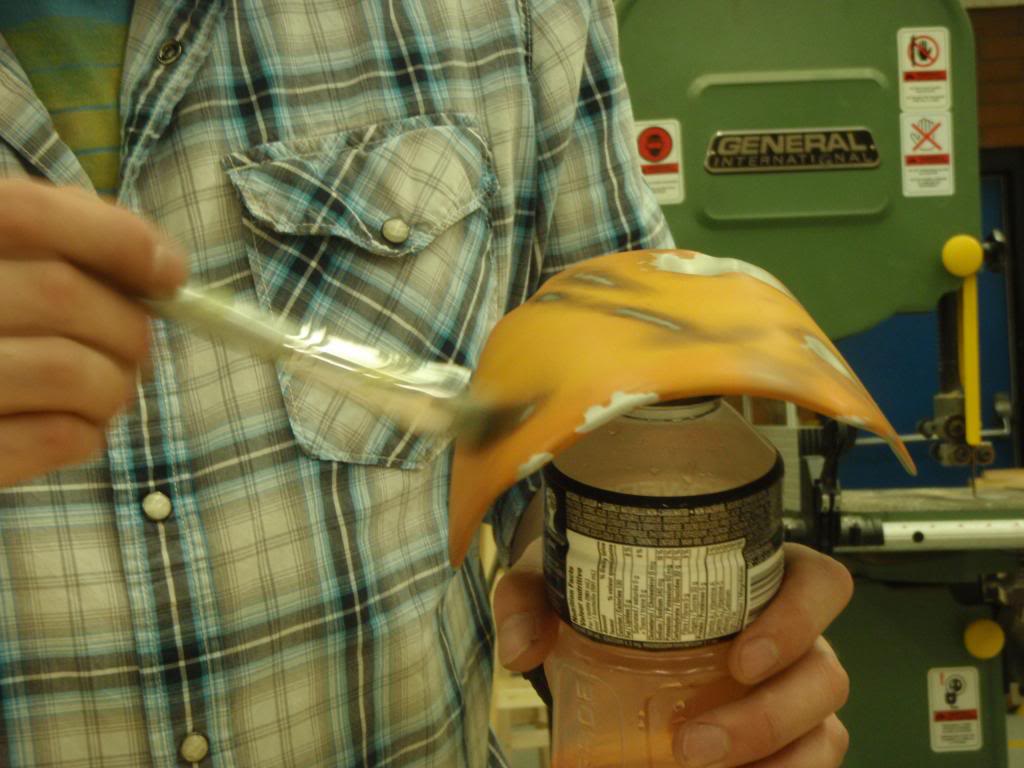 Big and soft brushes make quick, soft, and effective marks on the armor. All my armor pieces are attached to bottles of sports drink (I raided the recycling bins around the school ) half-filled with water using a little Blu-Tac poster tack. Putting some water in them makes the whole thing more stable and less prone to tipping over.

I love the realistic look of the scratches on your armor, and the gauntlet color next to the armor looks great! You are doing an amazing job! Can't wait to see the next updates!
N

It's almost finished! Just needs some actual scratches and scuffs: 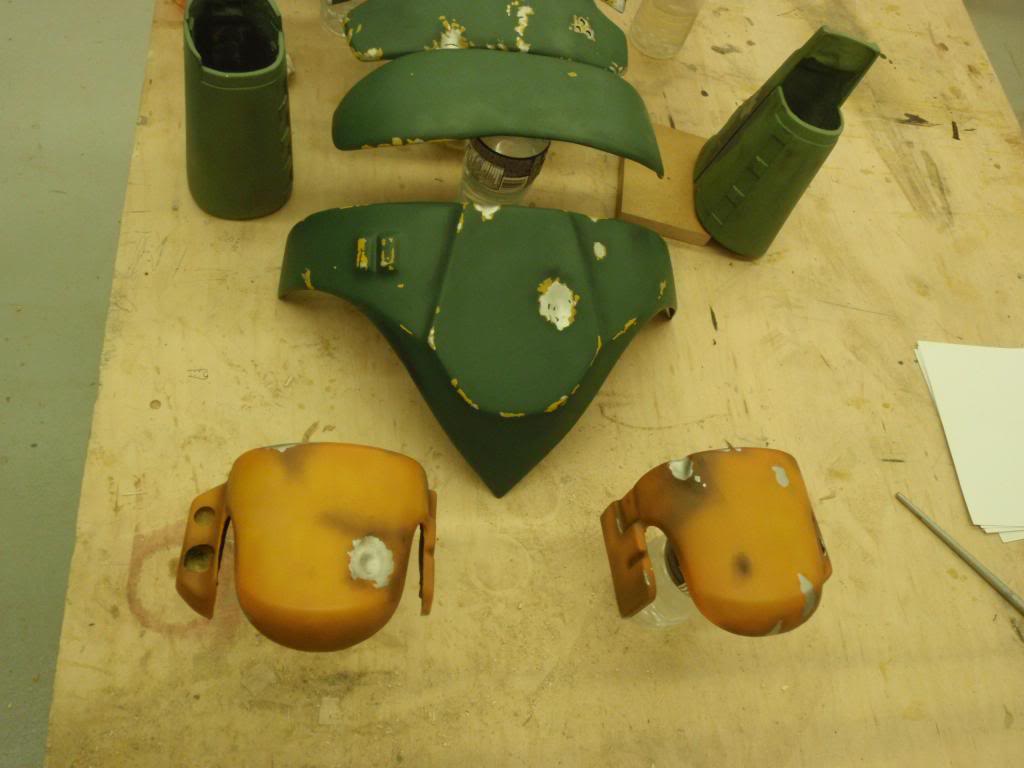 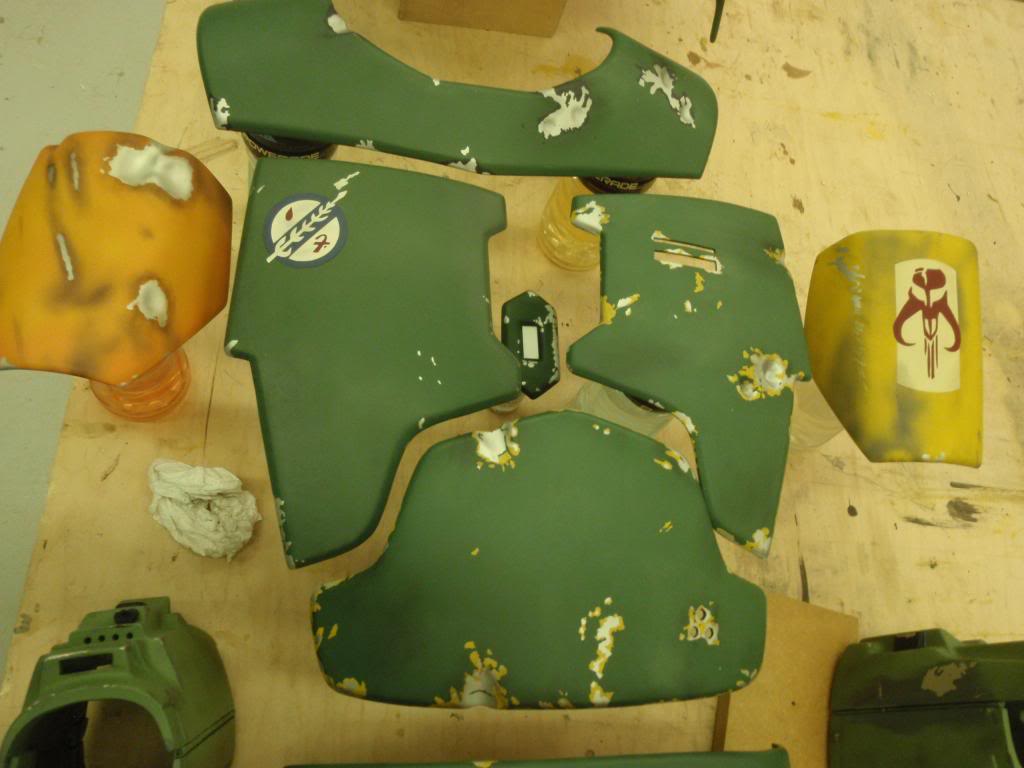 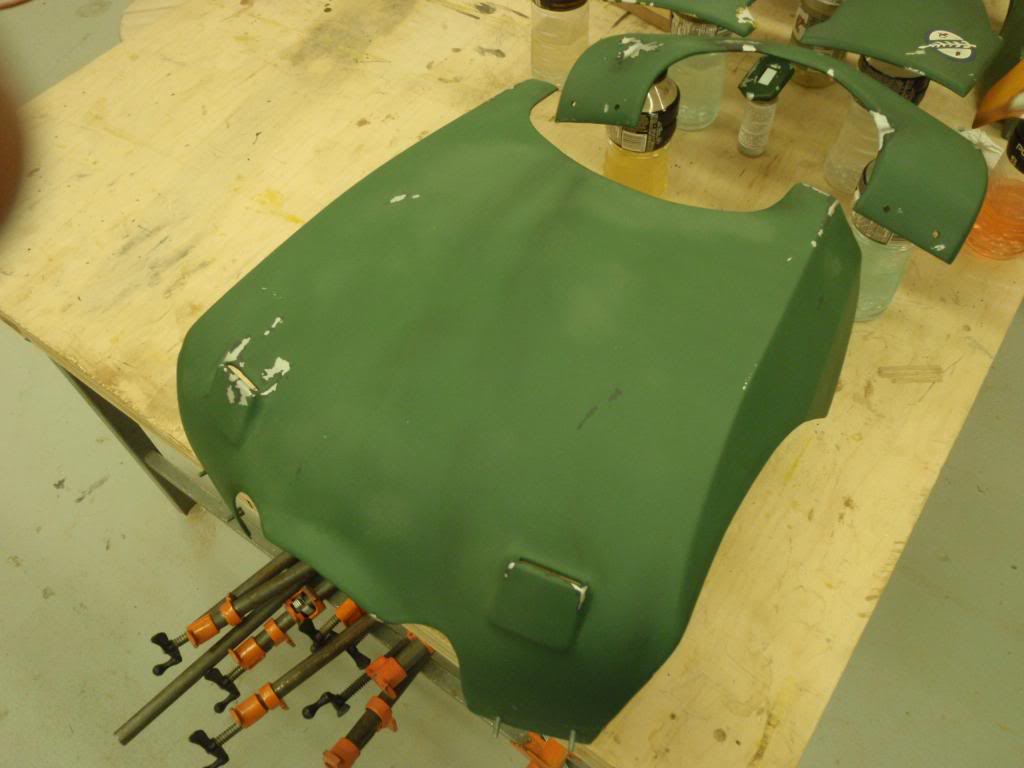 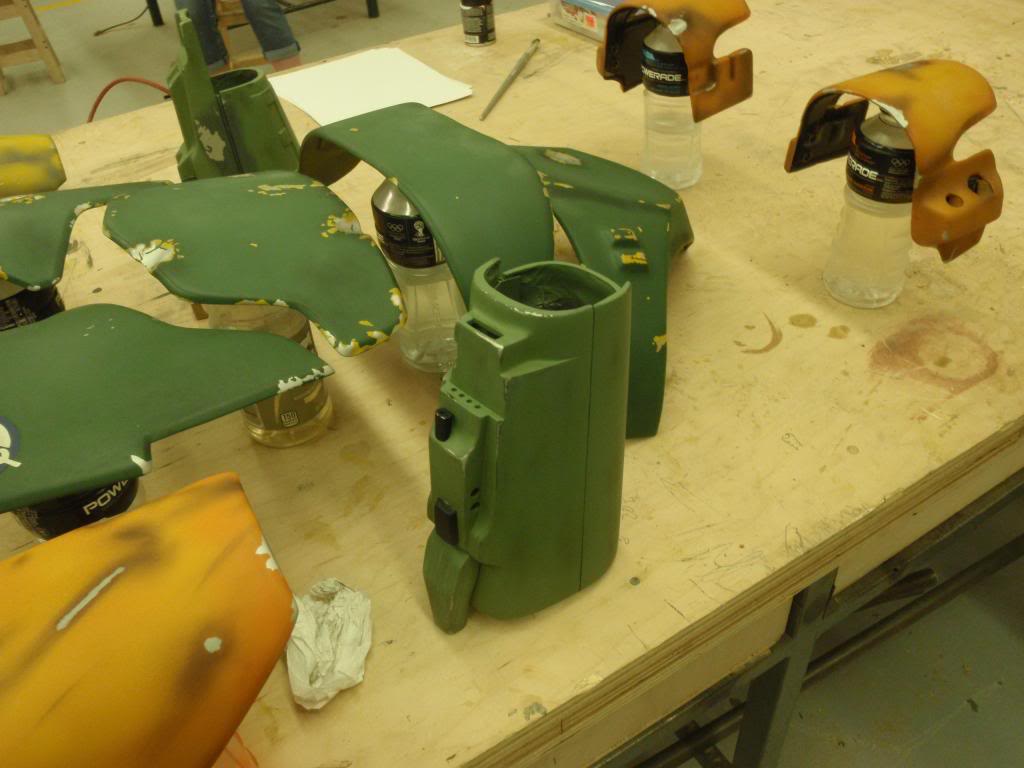 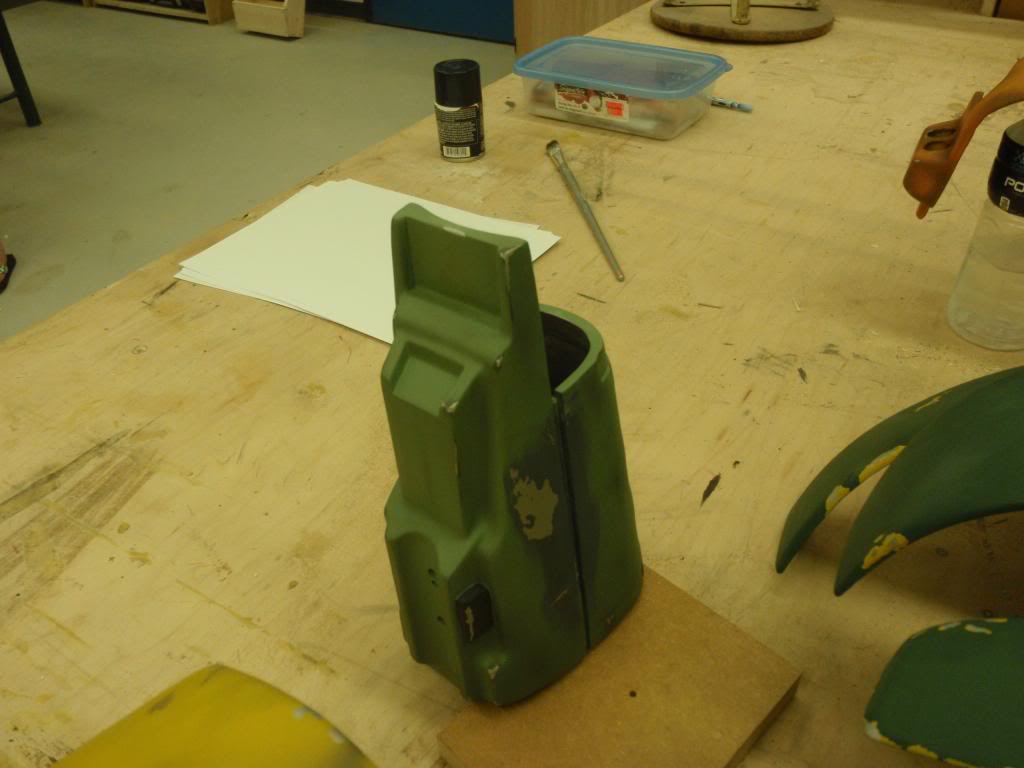 It was all coated with Testors DullCote. It gives all this work that dead-flat finish I want.
I'll post pics of Mr Fett with his new armor on later tonight.

I don't have any ESB armor.

Nice weathering job you got going on, though!

Excellent method, liking this A LOT!!

Great tutorial! I love using pastels too. They can give some nice, subtle effects.
C

Very impressive. Thanks for sharing the painting tips.

Weathering advice (too much or too little?)

T
How do I weather using spray cans?

G
How to Properly Weather