Adding bulk and weight to a light plastic helmet

Any ideas out there on how to add a bit of weight to an otherwise flimsy plastic shell? I was thinking of injecting some of the helmet with a high density filler foam or even adding an aluminium frame to the inside of the helmet to make it more rigid and have 'a bit of weight' to it. The only other option is to fibreglass the inside which i'm not sure will 'take' to the plastic surface. Ideas .........

I am not sure about the foam idea. I would be scared that it will fill the helmet and I would not be able to get my head in it. As far as fiberglassing, there have been many people who have done that. Hopefully they will chime in. While waiting, I would just starting reading the Helmet section or search for the words fiberglass and helmet. Good luck. Post some pics when you get it done.
R

Ok I think I'm gonna go for the fibre glassing option. Have spoken to a fibreglassing company and they said the best option to reinforce a flimsy plastic is to use an epoxy resin and square patches of fibreglass matting. As long as the inside plasic is abrasive enough (ie sanded with a course sandpaper or scored in a hatching pattern) the fibreglass layers should grip better. The risk that was made apparent was that the fibreglass layer may come away from the inner plastic surface when the helmet bends.
Wish me luck and photos will be posted with the results!
R

Use a craft ring and line the inside with fiberglass. I used this on my Rubies TIE helmet and I could stand on that thing without it bending.
R

Yeah I heard about the craft ring....is plastic or metal better and how do you go about fixing it to the inside. I'm guessing the diameter can be adjusted...
R

I'd go for metal as it's more likely to keep it's shape. They come in a lot of sizes and are used for things like needlework. I personally yoinked mine out of an old lampshade.
C

Hi Rob, I got your PM, asking if heat treating a Rubie's mask would help in your modification goals. I hope it's okay that I post my response here, if it'll benefit more than one person. Please bear in mind that my background has primarily been Vader and not Fett products, so with things specific to Fett, I'm going to have to differ to the expertise of others here on TDH. My direct experience is using heat to modify a Rubie's Supreme Vader. Perhaps someone can confirm that Rubie's used a similar or the same vinyl material in their Fett helmet.

My guess is that you saw one of my posts about bringing a heat gun into the equation to modify the shape of a helmet. If the question is "Does heat treatment of vinyl plastic make it stronger and more rigid so that I don't have to reinforce the interior" then the answer is no. I hope my post didn't cause anyone to come to this conclusion. Please allow me to clarify.

Heat makes only certain plastic more supple so you can manipulate it. Cooling it rapidly under water allows you to "fix" its new shape into position. If you don't and if you want to hang around and allow it to acclaimate to room temperature and you don't mind babysitting it, when it eventually returns to room temperature, the material will resume its original hardness/toughness/rigidity. However, heat does not increase rigidity. Even after heat treating my Rubie's Supreme Vader to reduce the width of the skull (ugh!), once cool again, it was still as tough and stubborn as anything, but it was like that in the first place. The cooling process (running it under cold water after exposing it to heat) will merely restore it to its original level of rigidity, and this method just shortens the cooling time.

If the question is: "Does it work with manipulating the shape" the answer is yes it was successful for me. For example. 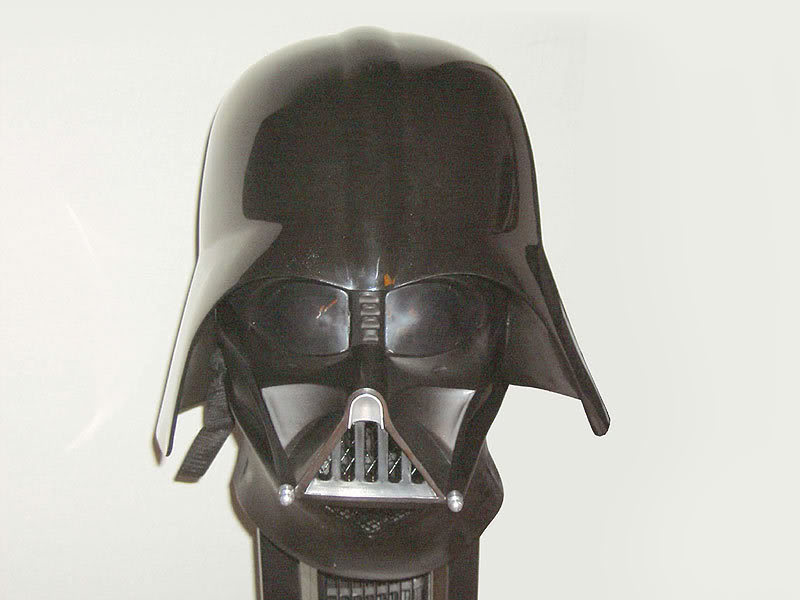 (Above: how it looks after heat treatment, photographed about 4 feet away).

1. You must be patient. It's a bit of a "feel" thing. You do not want the heat gun too close to the plastic, otherwise it will melt or blister that area. You want to move the heat gun around and evenly distribute the heat as much as possible. Eventually there will be enough heat build up even if you don't focus the heat in a continuous blast. You will start seeing the plastic sag, and when you do, try to manipulate it there with oven gloves. If it's just about the right shape, then run it over to the kitchen faucet and cool it while holding it in the shape you want. You may need a few tries.

2. If there is any kind of fine granular texture to the plastic, it might melt under this process. But if you're going to sand it, prime it, and then paint it, then more power to you!

3. You want to heat treat not just that immediate area but the surrounding area. People have told me that they manipulated something with heat, but eventually the memory of the material asserted its original shape. Doh! Well, two possible solutions here. If the surrounding areas were asserting their memory, then you soften them with heat. But if the immediate area still has memory, then it may take a second time. Or perhaps insufficient heat was used.

Then comes the question, "Should I reinforce my Fett helmet?" Unless the helmet is very flimsy whereupon flexing it would crack the paint, then sure, go ahead. But if you're doing it to make it unbendable like rock, there are a few "gotchya's" to this process too.

First, take the Don Post Classic Action Vader, which is the vinyl predecessor to the Rubie's Supreme Vader, though a much nicer design and implementation, IMHO. People who were into Vader long before me painted their DP CA Vaders up and trooped in them without any problems, and without modification to the interiors (save for foam padding). They needed no reinforcement.

Could the paint have cracked if the Vader domes were flexed? I suppose that's possible, but certain paints (especially automotive ones) contain a flex agent, whether they shoot it with a professional air gun or with an aerosol can. I do realize, however, in the Fett side of the SW Universe that people gravitate towards Rustoleum or American Accents (here in the U.S.) due to such nice off-the-shelf colors. Perhaps someone can chime in on paint durability. Or I'll paint up my Sgt Fang, eventually, and then comment on the paints.

The gotchyas, from my experience, in reinforcing a vinyl helmet is that there isn't a lot that will stick well to vinyl. I've been told that a lot of these helmets contain a release agent to make it easy for them to be released from their molds in the injection-molding process. This release agent causes certain things to have a heck of a hard time adhering to them.

In that regard, I've tried things ranging from plumbing A+B type epoxy "Quick Steel" products to "Quick Plastic" but I finally settled on Aquamend. It generally helps if you pre-sand the surface, but Aquamend does have a tenacious adhesion.

If resin and FG works, then more power to you. If you go this route, I'd say: pre-sand the interior so that the resin has something to grip. I generally do not like bondo because if it isn't mixed right, you can end up with a brittle mix that will crack when flexed.