Hi all.
I was wondering.....Has anyone's ever tried using a vacu-formed piece of Styrene or whatever as a makeshift mold for either fiberglass or some sort of cold curing resin? Of course, you'd have to spray a separating agent into the "mold" before spreading in the resin, otherwise it would just reinforce the vacu-formed piece.
This might not even be possible, but I just thought I'd ask in case anyone has ever done it. Thanks.

I may be mistaken, but I believe the resin heats up as it cures, and would more than likely warp the mould. Someone correct me if I'm wrong.

Even with a parting agent, polyester resin, used in fiberglassing, would likely chemicly attack polystyrene plastic. Unless allowed to puddle, or built up too thick, the heat generated is usually not enough to damage the plastic. If the pieces were vacced in polypropelene, there should be no problem using them as molds.

With PVC release the styene can be used as a mold for fiberglassing resin.
C

Thanks everyone.
I'm debating if I'm wanting to try using some of my vacuform pieces as molds or not. I might just try making or buying a mold that has better detail in it.

Corbin have you tried this yet? I was thinking about doing the same. I have my styrene piece and I'd really like to make a fiberglass one that's a little stronger and tougher.
Y

Yes you can do this I have done it the trick is to use a wax based release agent dont skimp on it , but you still might ruin the original piece in the process .

OK, this is my first post here so, be gentle guys!!!
I have an ABS Jango armor, and want to make a Boba. So, can anyone post a "How to make molds from ABS armor for dummies" for me. (every simple detail will help since this is my first try)
Another question, once I got the molds, the best size for a vaccuform table is... ??'' x ??'' inches? (thinking not only in making and armor but also a 3 pieces bucket, I mean, front, rear and dome)
Just another one. Should I go for styrene or ABS? pros & cons

A safer way to recast, for short run stuff, is to use something plaster-like rather than something fiberglass-like. It won't stick to the styrene or ABS, and you can usually vacuum form a few pulls over it before it crumbles at the edges.

Don't use plaster of Paris. It's really, really weak stuff. At least use water putty, and maybe something better like Hydrocal. (A cheap substitute for Hydrocal is one part portland cement to 7 parts plaster of Paris; I've never tried it myself, but I've heard it works well.)

If your shape has any concavities, plan to make vent holes to let the air out of them. An easy way to do that is to mold them right in, by inserting greased wires into the plaster or whatever after it's thickened but before it sets.
D

drcrash said:
A safer way to recast...
Click to expand...

Actually, a safer way to recast would be to...um...not do it at all. It's a bannable offense and something you really shouldn't be discussing here.
D

Actually, a safer way to recast would be to...um...not do it at all. It's a bannable offense and something you really shouldn't be discussing here.
Click to expand...

For example, RC modelers often make "backup copies" of the canopies and especially the cowlings of model planes. The cowlings (nose bits) are likely to get broken in a crash, and if so, you can replace it with the copy. That seems like "fair use" to me, as long as you don't use more than one at a time. (E.g., build several models from one kit by copying the parts.)

I also recast my own original stuff to make mods---I use vacuum forming to make intermediate negative molds, cast a new positive, modify that, and use it as a new positive to vacuum form over.

I'm not advocating recasting for ripping off other people's hard work, just using it for "fair use" backups and as an intermediate mold-making technique.

A lot of people don't realize that you can make intermediate molds easily that way, and they end up re-doing a lot of hard sculpting work when their sculpts degrade under vacuum forming. Yikes.

That's my main interest in recasting---keeping people from having to re-do their own work. Using it to steal other people's work is not just illegal but downright tacky.

I don't want to make a mess here so, sorry if I didn't make myself clear, my armor was made for me by a good friend who now lives pretty far from here and can't re-do the job for me. I'm not doing this against his will, so there is no legal stuff involved in here. I also have another friend who is an sculpting pieces for both of us and I'm just trying to learn a little about how to make molds, vacuform, etc.
Sorry again about all this.
BTW here's a pic of his job, I think it is very impresive

Anyway big thanx drcrash, I know your only intention is to help a newvie! 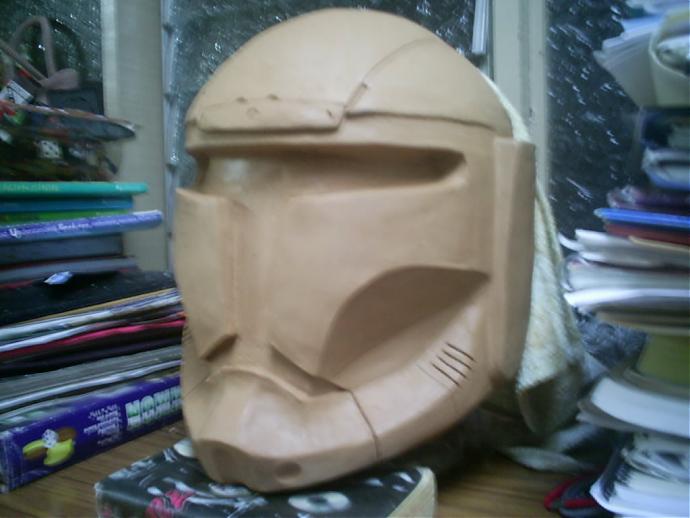 Well if you have his permission (sincce he is a friend of yours) then no worries there.

Wasn't trying to accuse you of anything, just trying to keep you from getting yourself into trouble.

I know, my mistake, english is not my native languaje and sometimes I have a hard time making myself clear, sorry about the mess

With a piece like that would you need small holes drilled in the smaller concave areas or would the vacuum pull the plastic right into them?
Y

You can recast any thing that you made your self or if you have the permission of the original artist . Some people here recast and freak but there are legitimate reasons to do it . for instance piecies that are out of production and are wearing out and need to be replaced . parts that got broken and need to be replaced . parts that you made and now you are doing it for your friends . I personally do it almost every day for production tooling in multiple set ups or for people who lost there supplier for some reason ( usually they closed ther doors and didn't bother to tell there customers so they could claim there tools ) so it is fast and inexpensive to recast from a sample of the part than to start over from the begining. remember wax based release agent liberally applied will act as a barrier and stop the resin from bonding to the base material.
S

I have been lurking these boards for awhile and the recast thing still baffles me. How is it okay to poach another artists intellectual property by producing the armor and costumes for sale but then get upset when someone else does the same thing to you? It is the moral ambiguity that I find fascinating. I do not want to get flamed or start an online arguement, I was just making an observation which I am sure has been made before.

B
Blaster pieces warped How to straighten?

Build your own form

B
Blaster pieces warped How to straighten?

Build your own form