Hello Fellow Fetts,
I'm getting Boba Maker Gauntlets and was curious about the Left Gauntlet and little Red LED on it. I'm sure someone here knows but how does this light up? Is it:
1) Always on and steady
2) Blinking (If it's this.....at what cadence?)
3) Pulse (Fade in/out) 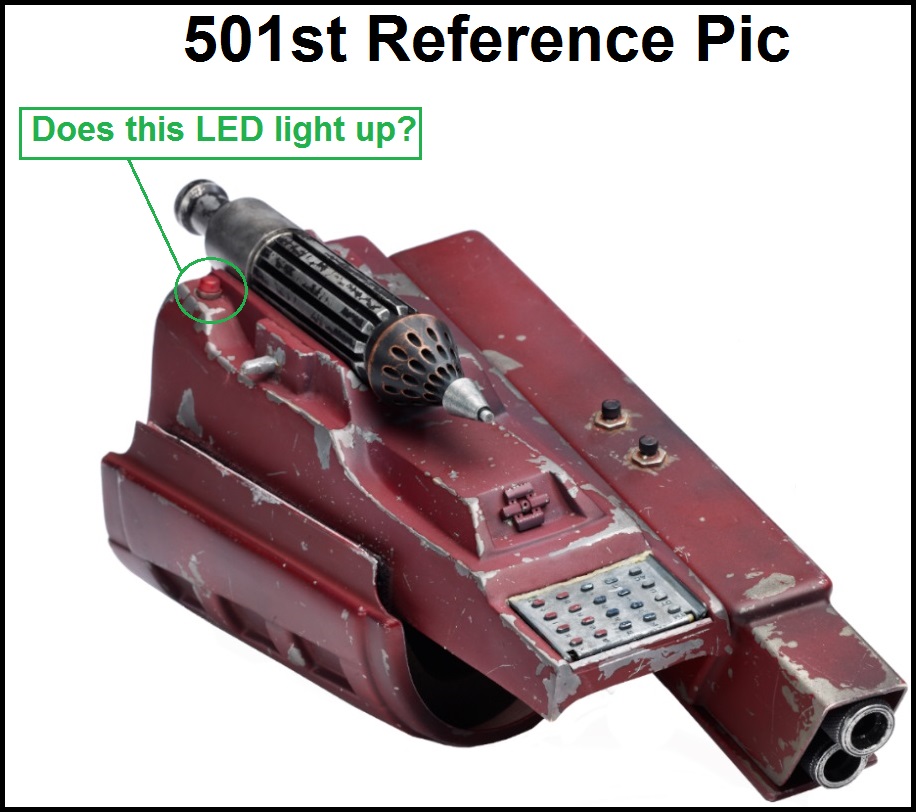 For the Right Gauntlet - I see in the 501st Reference Pictures there are two holes. Are anything installed here - like on the ESB Gauntlets? (Guessing the answer is No - but just want to be sure. But Boba Maker does include these switches. 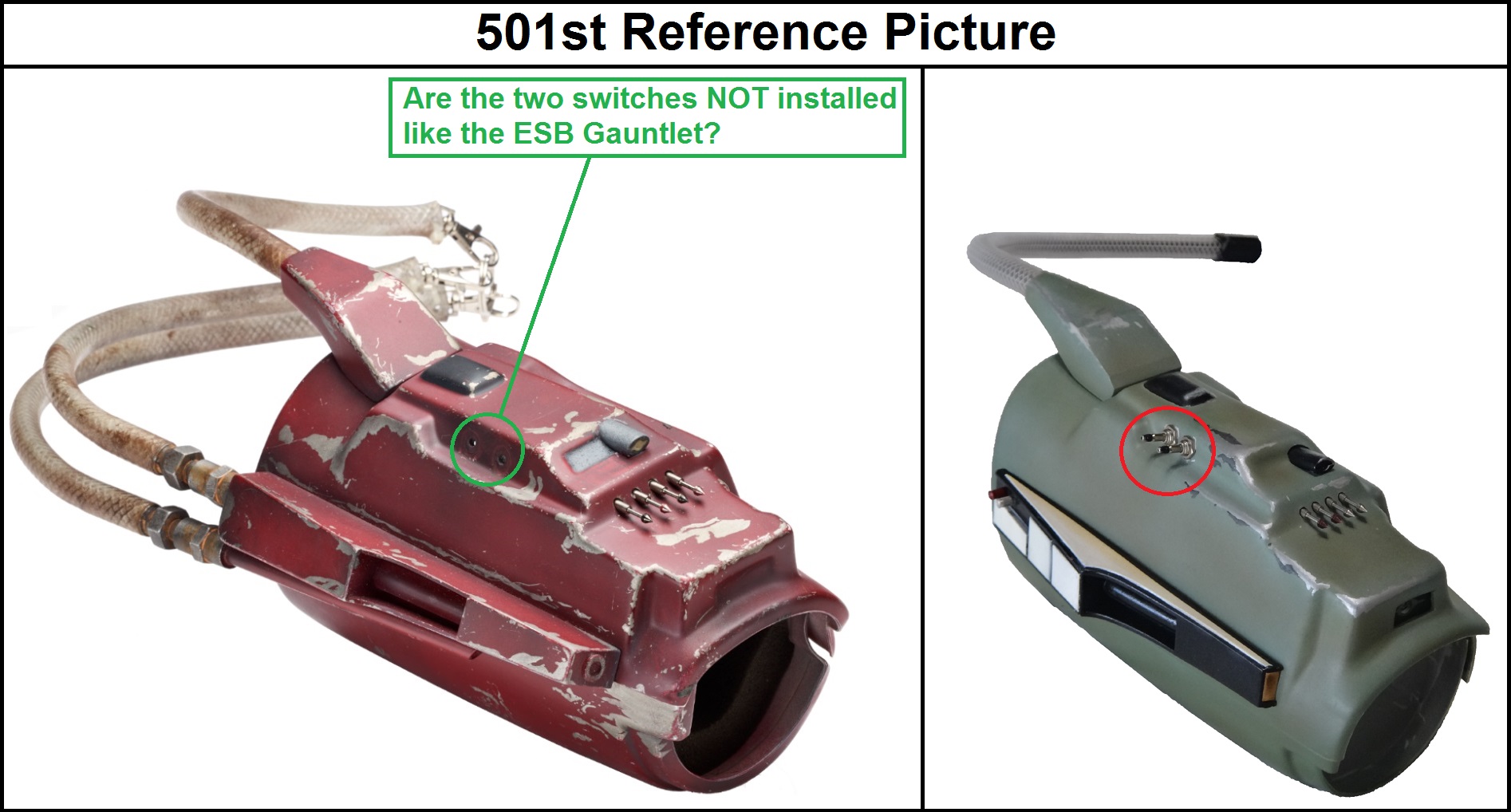 Thanks for any info!

If you are going with hero ROTJ (no switches)

SUTT4869 said:
If you are going with hero ROTJ (no switches)
Click to expand...

Hi SUTT4869 - Please forgive my ignorance, what is the difference between "ROTJ Hero Fett" versus "ROTJ Fett"?

Hi there
I believe what they are meaning is that there are many different versions of the ROTJ gauntlets. The version shown in the CRL has the pilot holes rather than alco switches. If you have a look at the CRL text you can have alco switches for hero as well. It’s just which version (damage)you choose to represent that will dictate if you have switches or pilot holes. If memory serves I think pilot holes was stunt ROTJ.

I know there were few articles on here with pictures that listed out the different ROTJ gauntlets. Will see if I can find it. Harder to do on a phone.

In relation to the light. It doesn’t have to light up. Some do wire it up so they can turn it on from one of the pushbuttons on the flame thrower. In most cases I have seen steady light.
Hope this helps.

MinaFett - Good to know on the various different versions of gauntlets! I had no idea there were others out there. I seen the term "Hero" or "SE" version tossed around a lot but never thought to ask about it. I'll do some digging of my own on that. In addition, thanks for the intel on the red LED - Do we know if anyone has seen it lit up in the movies? Even with Blu-Ray and digital versions versions its kind hard to Zoom in to see.

Pretty sure both of these are considered “Hero”. The photo shoot has no switches. The palace scene has one. It varies.

"Hero" refers to any prop or suit that is used in movies where there is a close up shot. It contains more details to make it look real. "Stunt" versions have less detail and are used in background shots or fast paced edited scenes.

I would pour over the reference materials here, they are extremely useful. Ramjets picture above shows the switches installed, as well as this picture. This is enough evidence for me to include them in my gauntlets when I get them. 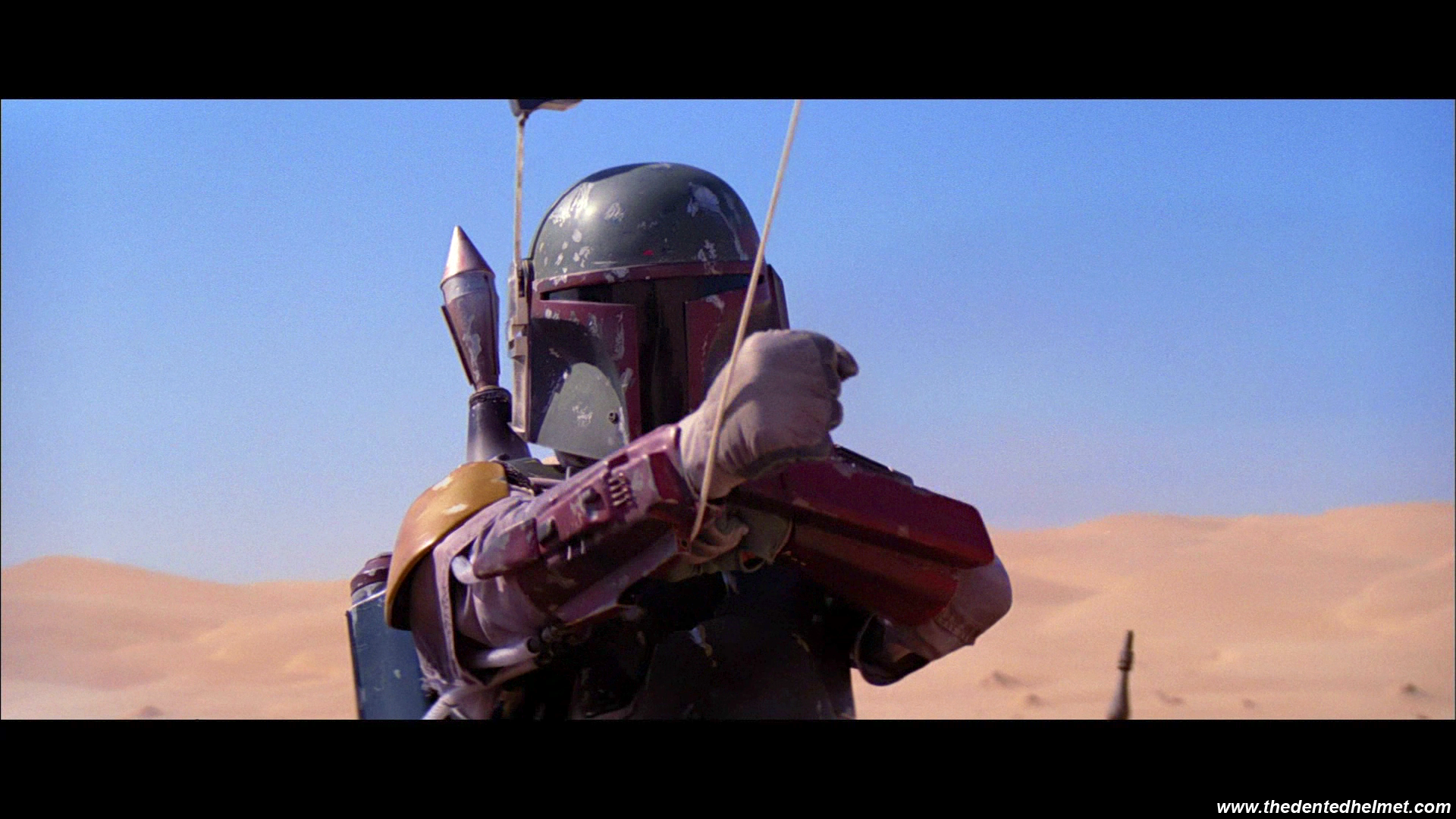 I have the red LED on steady, activated by slide switch in the “battery” cover. It is wired into my flamethrower where I have a 9-volt battery that powers the LED, the sound effects circuit board (pulled from a cheap toy Fighter Jet I bought from the store) and the flame LEDs. When the slide switch is on, the LED lights up and stays on. Then if I press either of the push buttons on top of the flame thrower, the flamer tips light up and the sound effect is activated and last about 10 seconds. If the slide switch is off, buttons do not activate lights or sounds.
On my right gauntlet, the Alco switches operate lights and sound effect in my jetpack. (Front Switch turns on a tactical LED installed in the front of the gauntlet. The rear switch activates lights installed in my jetpack thrusters and also makes sounds like rocket noise.)

If interested in lights/sound effects for the left gauntlet, I drew a rough wiring schematic. hope this helps. (Sorry for the poor quality drawing)