Rigging a servo remote to your gauntlet.

Some people on here may have seen my remote controlled servo which was activated by my gauntlet. If not, check out this video:

Yes I know it's been posted a few times, and yes the topic of a remote controlled servo has been brought up multiple times. But the topic of rigging the remote to your gauntlet has not been discussed in detail recently. I know a somebody had asked me for a wiring diagram, I could not provide one because of hot glue covering the leads. Well, at C4, I experienced a bunch of electrical problems, and one happened to be the remote in my gauntlet failed (a few wires popped loose) ... due to high heat and primarily heavy perspiration.:angry So I had to take the thing apart and rewire it ... and create a mechanism to prevent my perspiration from causing another failure.

This time, I decided to take some progress pics in case anybody wanted to do this. But before I proceed, I want to make the following note: this is NOT "THE" way to do this, but it is "ONE" way to do this. Also, I am using the equipment sold by Hyperdyne Labs for this. Anyway, here it goes.

First, inside the remote that comes with the servo boards, there is a chip that looks like this: 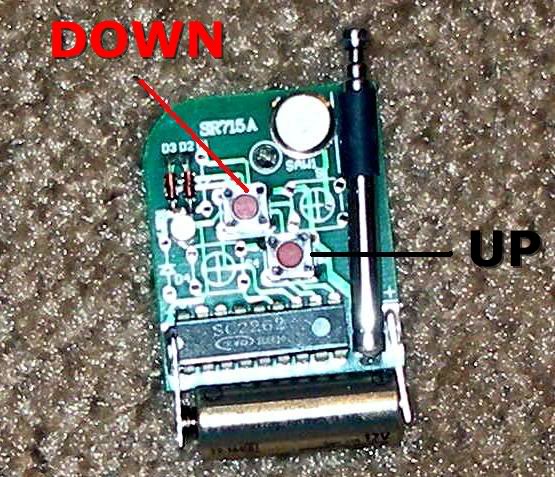 The top button makes the rangefinder go down, and the bottom one makes it go up. The big question was exactly what circuit was been closed by pushing the buttons? If I figured that out, I could use my gauntlet switches instead of the buttons. I was petrified of playing with that chip because I may accidentally cross wires, which could render the chip (and therefore the servo) useless. But I did figure it out: 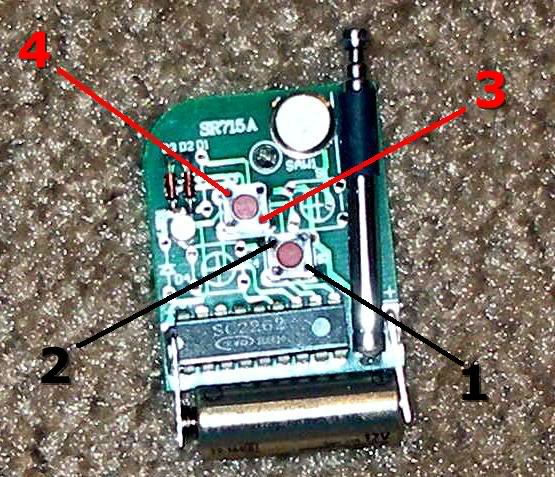 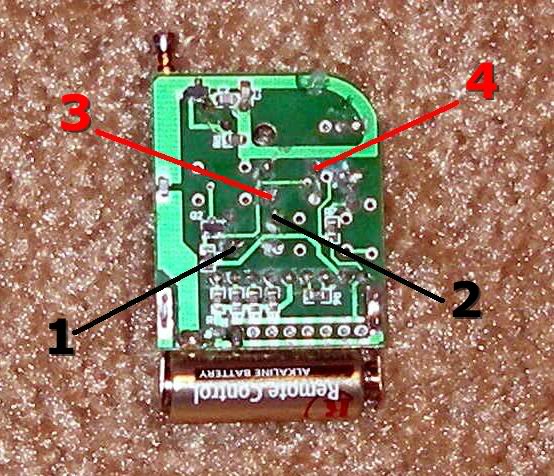 There's a view of the back of the remote (battery still on the bottom.) First, look how close points 2 and 3 are ... and they should NOT touch each other! Second I found it a lot easier to solder wires to the back of the remote at these points, but I am still dealing with a tight space. With some patience, it can be done. ***Before proceeding, remove the battery in case a wire touches something it shouldn't!*** Start by soldering a black wire to point 1 and a second wire to point 2: 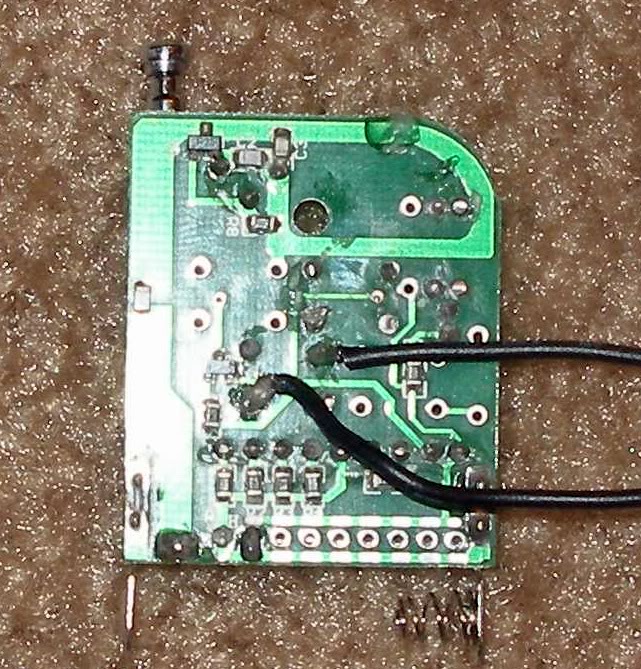 Make sure it's soldered tight and make sure it's only to points 1 or 2 and not anything else! Test it by putting the battery in, and touching both black wires together. If successful, the red light in the front of the chip will come on. If not, then there is a bad connection somewhere, AND IT MUST BE FIXED BEFORE MOVING ON. (Oh yeah ... make sure the battery isn't dead!p) Now remove the battery, and solder a red wire to point 3 and one to point 4 (use red here so you know which wires are for UP and which are for DOWN): 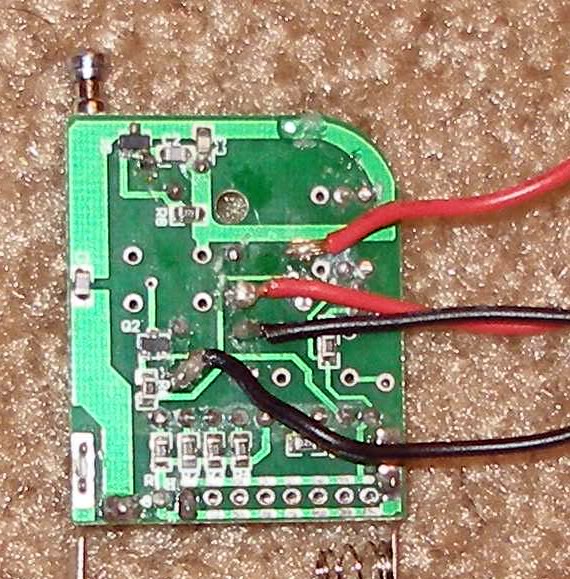 Again, make sure points 2 and 3 do NOT touch! Do another test with the battery in like before. If the red light doesn't go on when the wires contact, then it's obviously a problem with the red wires and not the black one (the black ones were already tested.) If all is well, then put some hot glue over the connections: 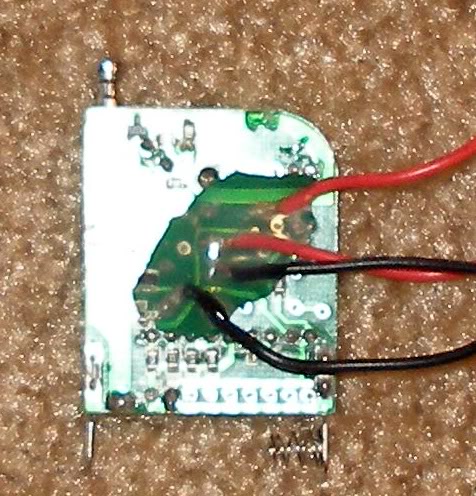 This ensures the wires won't break off when the gauntlet is put on. Now the other ends of the wires can be soldered to the switches: 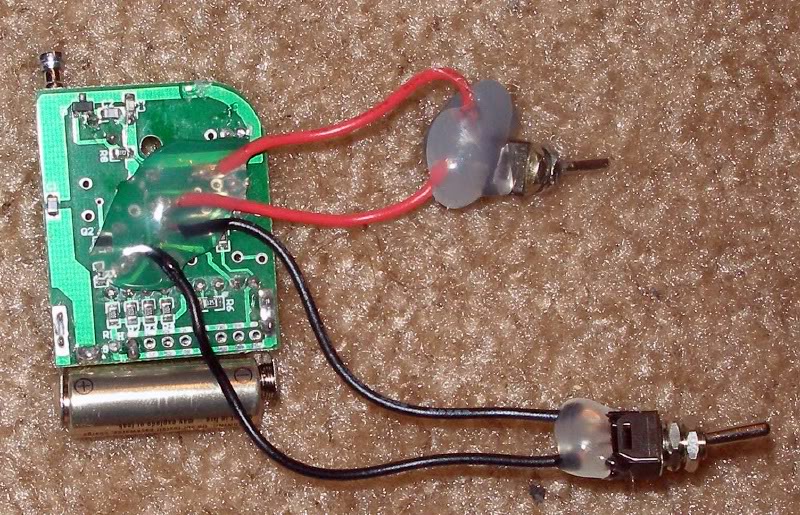 Again, do a test with the battery after rigging each one up. I can't emphasize that test enough ... because if it isn't done after each step and at the end the thing doesn't work, then the problem could be anywhere --> START OVER!:angry:angry:angry. If all is well after the test, put some hot glue on the connection so the wires don't break off. Then put the switches in the gauntlet: 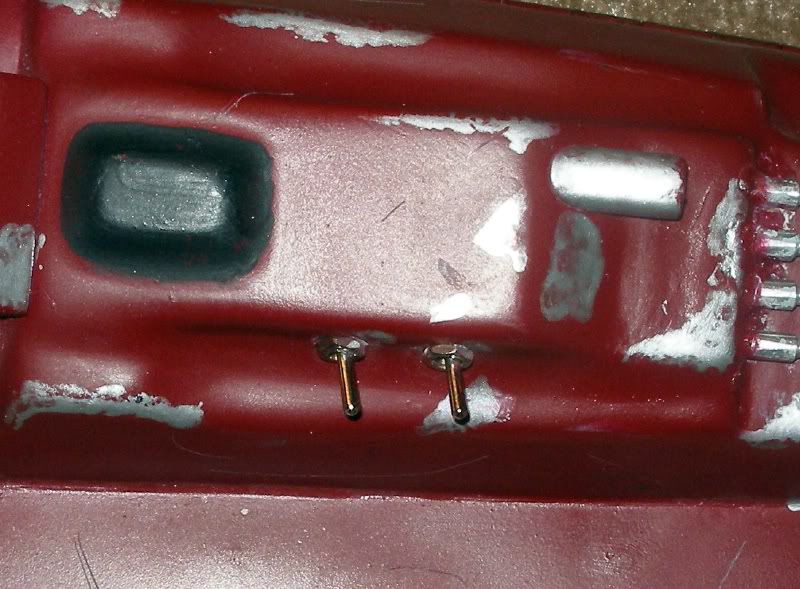 Now the shield against perspiration. I have found long-duration trooping turns my gauntlet into a swamp possibly causing a short circuit, but I also found it lifted the hot glue causing the wires to pop off (which was the gauntlet failure I experienced at C4.) So here's a good way to fix it. wrap the remote in some sponge and wrap it with plastic food wrap. The sponge will stop a sharp corner from tearing the wrap, and the wrap will stop any perspiration from getting to the chip: 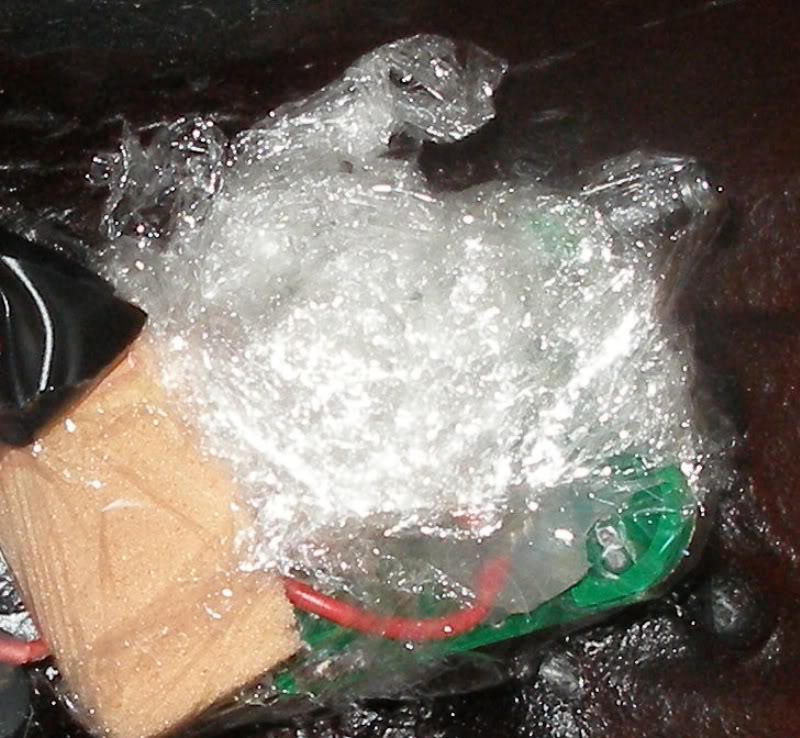 Well, that's it ... except for one thing. Remember your switches now activate the remote. After trooping, make sure both switches are in the off position! If one is left on, or something knocks the gauntlet and hits a switch, the remote battery will drain. When it's time for the next troop, it'll be dead.

Sorry for the length of this, but I hope it's helpful to anyone who wants to do this.
Last edited by a moderator: Aug 3, 2017
G

haha, nice job Scott! You definately know more about electronics than I do.
K

Thanks so much for the great info! I have the same hyperdyne set up and have been wanting to work this out for a while now,
Cheers

This is good stuff. Thanks Scott!!!

Preferred Vendor
You are the man!! What a great tutorial, nicely documented. I can't wait to get mine . Now if only Hyperdyne can re-stock then soon.....
T

You could always use momentary toggle switches for this which would mean they couldn't be left on.

Preferred Vendor
Do you by chance have any pics of the Servo connection to the stalk?? Specifically the "arm" that goes through the helmet??
4

Couple of questions on this,
1 how long does the battery in the guantlet last?
2 Did you remove the push buttons off the modified fob and solder the wires on the back, or are the buttons still on there?

Thanks for the info.

Shin Tools More than you ever wanted to know about Boba Fett's Paterson Print Squeegee!

Shin Tools More than you ever wanted to know about Boba Fett's Paterson Print Squeegee!