OK, I know this sucker looks ugly, but it was my first attempt at working with one of these crappy latex Rubies buckets.

The first photo is what I started with. Ugly? You betcha!

The next is after I shaped it. I'm still not happy with the dome, but tried rounding it out 3 times and finally gave up. I used a metal hoop in the back to give (and hopefully keep) the proper flair. I actully had to add aluminum strips to the front cheeks to straighten them out.

And the final 4 are after I painted it. I had never done a ROTJ bucket before. The colors are all stock spraypaints. The only problem I had was that silver stuck really well, but the other paints didn't stick to it as good. So every time I taped it off to paint another color, more paint chipped off. I painted it for a friend of mine, and we're calling it a "post sarlacc pit ROTJ bucket"

I was very happy with the metal finish I gave the silver. After I had painted it silver, I used the mustard method to mask it off. As I removed the mustard, I used a scrotchbrite type pad and rubbed it off. This gave it a dulled down metal-type finish. I went back with a silver paint pen after I was done painting and shined up spots on top of the silver areas.

I know its still ugly, but its a good start for my friend. 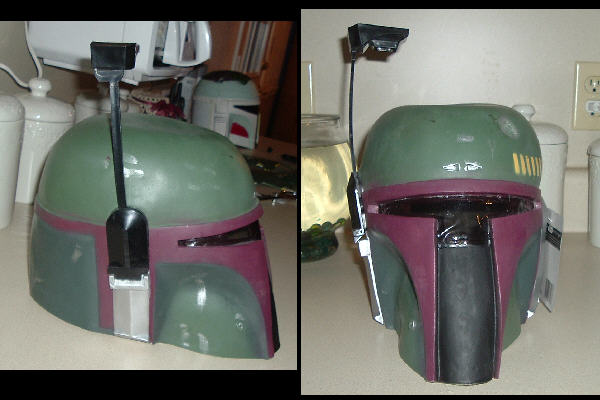 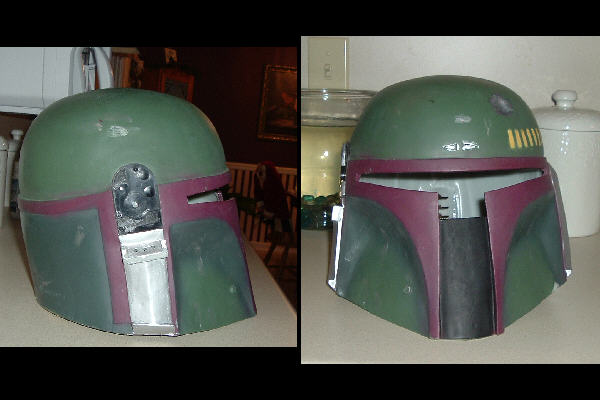 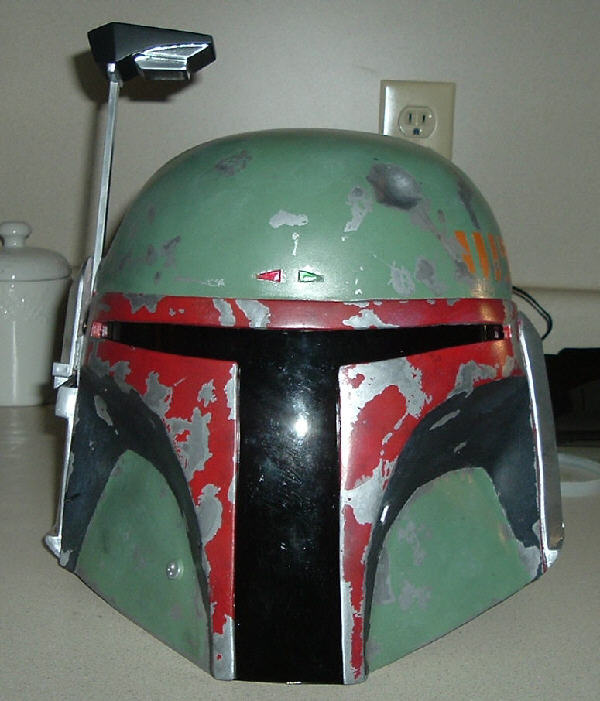 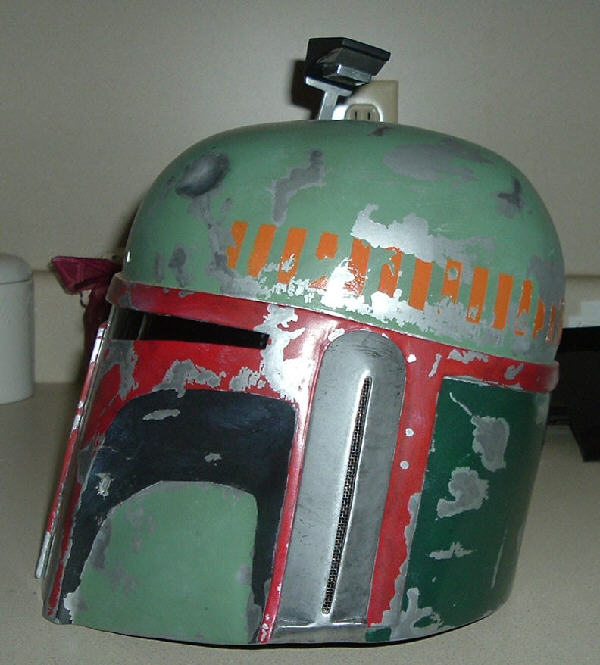 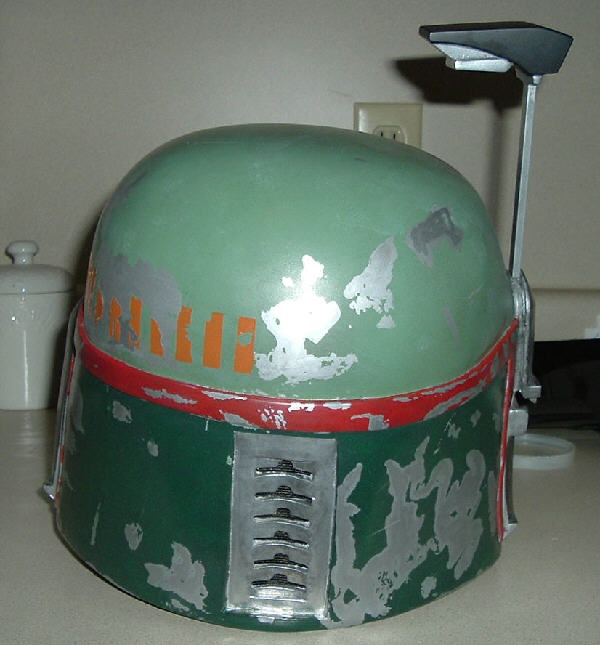 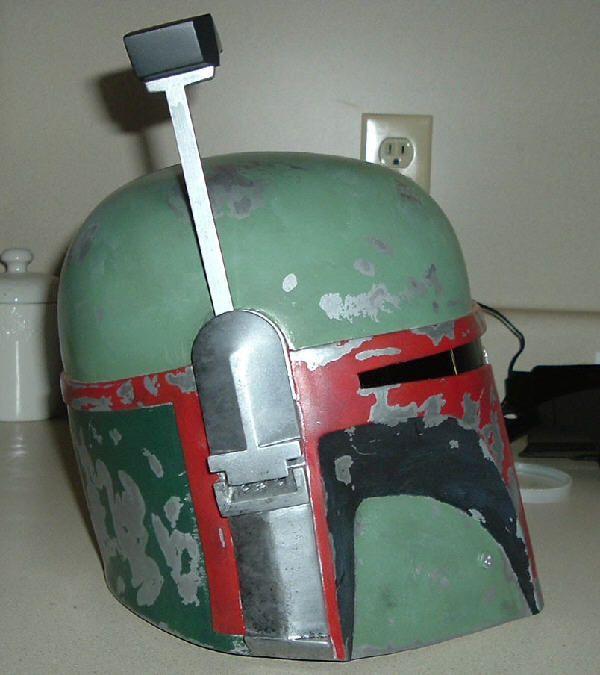 wow! I dont think its that ugly at all!

well its not the ebst ive seen but still... I think that if you see what it was and what its now... awesome!!

and what did it cost you besides alot of work??

I mean... this isn't the Rubies "helmet" right?

it's the mask... my Rubies JF wasnt warped that bad, was pretty well shaped, and solid aswell.

Wow! Talk about polishing a turd!

That is an incredible difference. Great job!

I must say that you must love a challenge 'cuz I would have just tossed that baby in the trash....you saved it in such a way that it looks GREAT!!

Wow.. I remember seeing that Auction on Ebay... I thought it would never look anything like what your skills turned it into!
Last edited by a moderator: Mar 12, 2005

That was bad! (note the use of the word WAS) but now... An extreme makeover for Rubie's! Maybe they should hire you to redo ALL their Boba buckets!

hi guys i know im new but here are some pics of the same make of helmet that i modified for a friend(excuse the pose )i brought the helmet for me but my head is too big so i made it into jango for him. 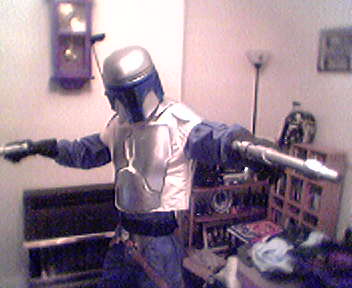 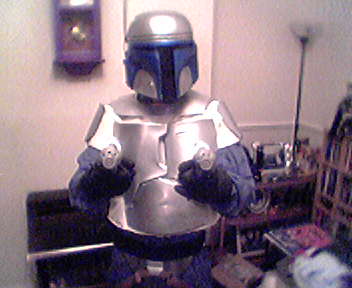 Man you worked a miracle with a piece of junk. Looks great!

Beauty is in the eye of the beholder.

What I think is that you might have done something we all do to ourselves.

you have put out a work of your own art. I loved it. And keep us posted

with some new pics!

are you kidding me? that looks good, I agree with ^ whenever I make something I always get stressed on the smallest details, but you need to be that way to make everything just right, just like in ANH, lucus went into the hospital for high levels of stress, and look what he created.

the difference in what it started as and how it ended up is night and day. so take a bow for a very nice job indeed.
B

that cant be the same bucket. it looks like jaba the hut sat on it, and now look at it!!! great job.

i have to say congradulations! man the first stage was really ugly, it's almost as if it was made for jar-jar binks.lol now look at it! nice job!

Wow thats awsome work mate Ive been working on a Rubies for a while now trying to get it right for my custom mando (before i takle a fett) i hope mine turns out that well when im finished!

The transformation of the shape of this helmet is amazing. Would you mind posting some how-to's on the reshaping so that others might benefit?
.

Nice work !!!... I would have taken a single look at that helmet and ran for miles ... impressive restoration work indeed

To everyone - First off, thanks for all the comments - you guys are too kind! I did purchase it with the knowledge that it would most likely be a challenge, but what a challenge it was!

OK Chris, I'll throw something together as far as reshaping goes:
1st - don't be discouraged! These cheapo Rubies helmets are all ugly. Just keep in mind that it will look lots better when you are done. 2nd - be safe when using extremely hot water. I got a nasty burn on my pinky!

I started with hot water, lots of hot water...I have a kitchen sink with 2 big basins, but 2 5 gallon buckets or something similar would work. I filled one side with cold water. The other side I filled with hot water (as hot as I could get from the water heater). Then I boiled a big pot of water and added to the hot side to get it really warm.

Next, I worked on the general flair of the bucket. These cheapo helmets are made from latex, albeit thick latex, but latex nonetheless. Hot water makes it very pliable, and the hotter your water the quicker it becomes pliable. Dip it in the hot water and hold it there until it is as soft as you want it. Then shape the area you want reshaped and hold it into position. Next, dip it into the cold water and hold for a few seconds until the latex cools off. Repeat. If for some reason it doesn't shape right, just reheat it. Very similar to using sintra.

After I got the flair the way I wanted it, I worked on small areas. Take the cheeks for example. You can see from the photos above that they were flaired way too far forward. I would take a cup, dip some of the hot water out of the sinnk and pour it over the area until it was soft. Then dip, cool, and repeat if necessary.

After I got it shaped the way I wanted (read this as "shaped as good as it was going to get"), I installed some internal bracing. I bought a 12" hoop from Wal-Mart, cut it to fit, and placed along the bottom of the back, ear to ear, so it would hold its flair. I kept having problems with the cheeks trying to poke back out, so I cut narrow stripes of aluminum bar and ran along the bottom of the cheeks from the ears to the visor. These pieces were attached with Plastic Welder (which seemed to adhere to the latex as good as anything else I have tried).

I used very minimal amounts of Bondo on it. I am afraid that since the material is so soft, cracking would occur later if too much was put on the helmet. I reworked the dent too. These old buckets look like they have and inverted pimple for a dent, so I cut and sanded the dent out to make it more accurate.

One thing I did like about it being made from latex is that the keyholes and holes in the ears were easily removed with a hobby knife.

I was worried in the beginning that it wouldn't fit my friends head - he was a much bigger noggin than mine. I removed as much material as I could from inside lip of the visor and it seems to fit him pretty good. He did complain about his nose being squashed some, but I told him to get used to that!

I won't go into painting it, 'cause I'm no expert when it comes to paint. There are plenty of people here that can help in that area besides me! If you have any particular questions, feel free to PM me.

Again, thanks to everyone for their kind comments. I HOPE I won't have to do this again anytime soon!

Before I got my M_S, I used the hot water method on my Rubies, but didn’t use a hoop. I took fiberglass to brace it from the inside and it worked very well. It took more than one week to dry correctly, but now I have an extremely rigid Rubies with a lot of flairing. Now it’s a latex/fiberglass hybrid …

I love the work you did on the "Ugly Bucket".
I'm starting on my own U.B. and I have a few questions.

I want to buy an esb boba fett helmet, but which one?

I want to buy an esb boba fett helmet, but which one?