Well as some of you may remember (if you don't, I won't be suprised), I had a Jango costume that didn't look that great and was not complete. So I decided I needed to do some refurbishing . After a few months and some cash I came up with this new and improved suit this past saturday night (completed 2/26/2005). I hope you all enjoy it! 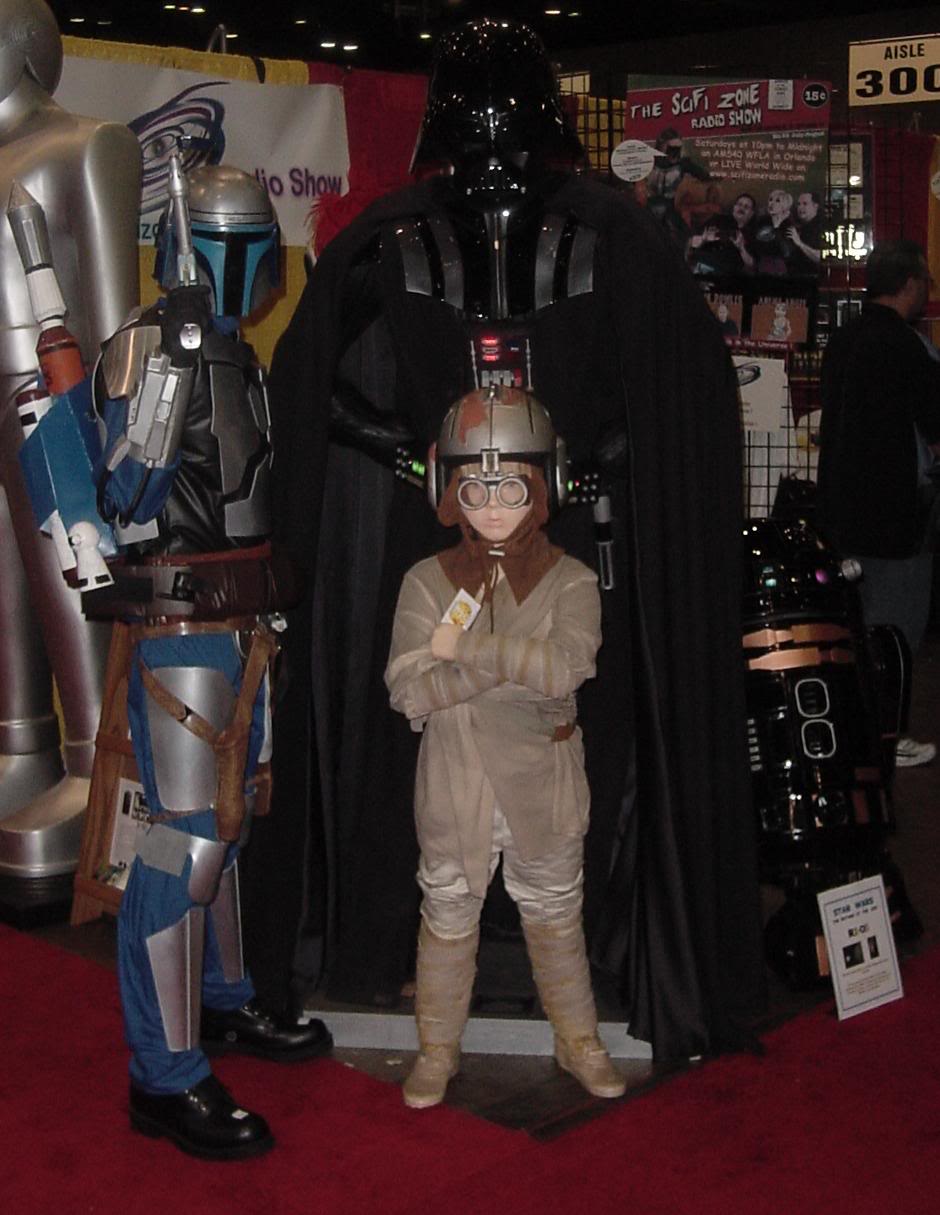 This was at MegaCon here in Orlando, Florida.
I stood by these statues/manniquins(sp?) for a little while and stood still. People started to think I was a manniquin until I startled this one kid trying to look into my visor. That was a pretty funny moment. Anyways, on to some more pictures.

This would have to be one of my favorited below mocking Anakin's pose. 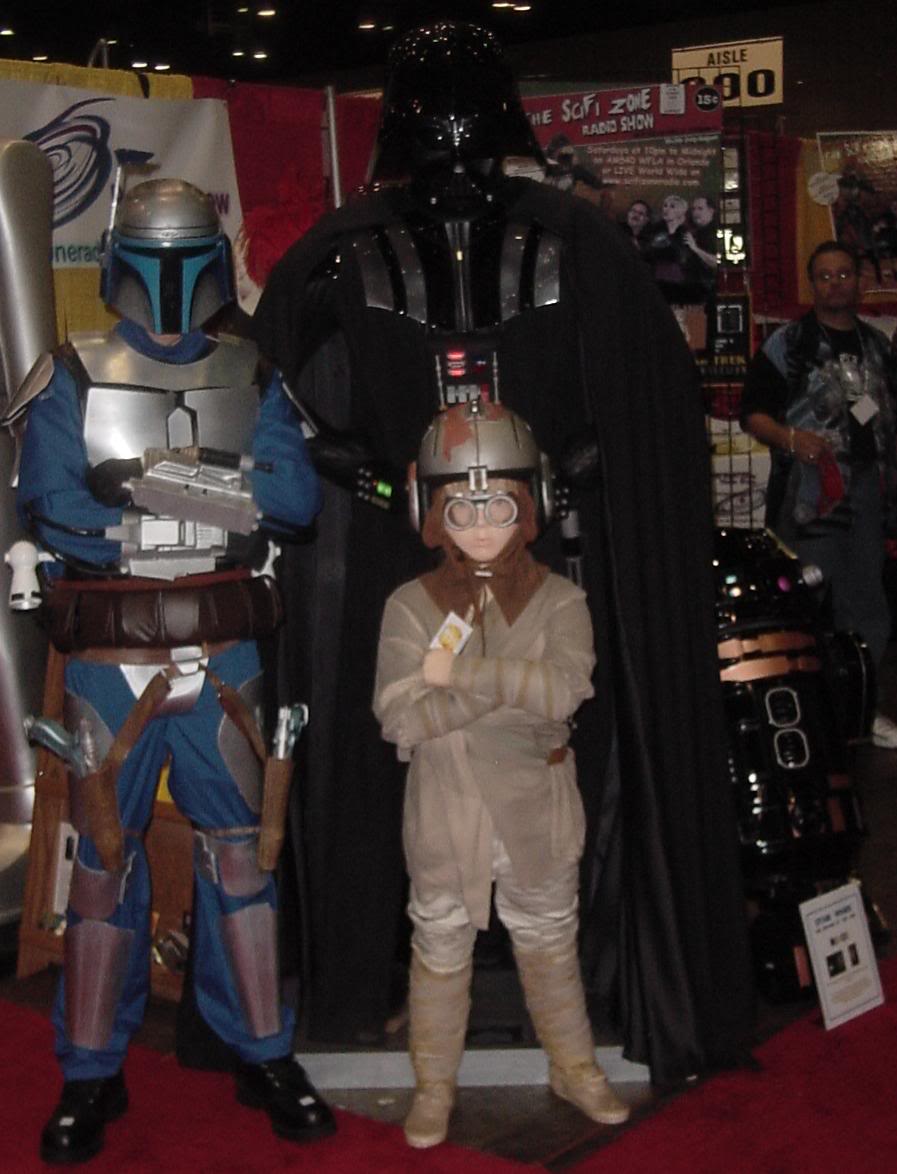 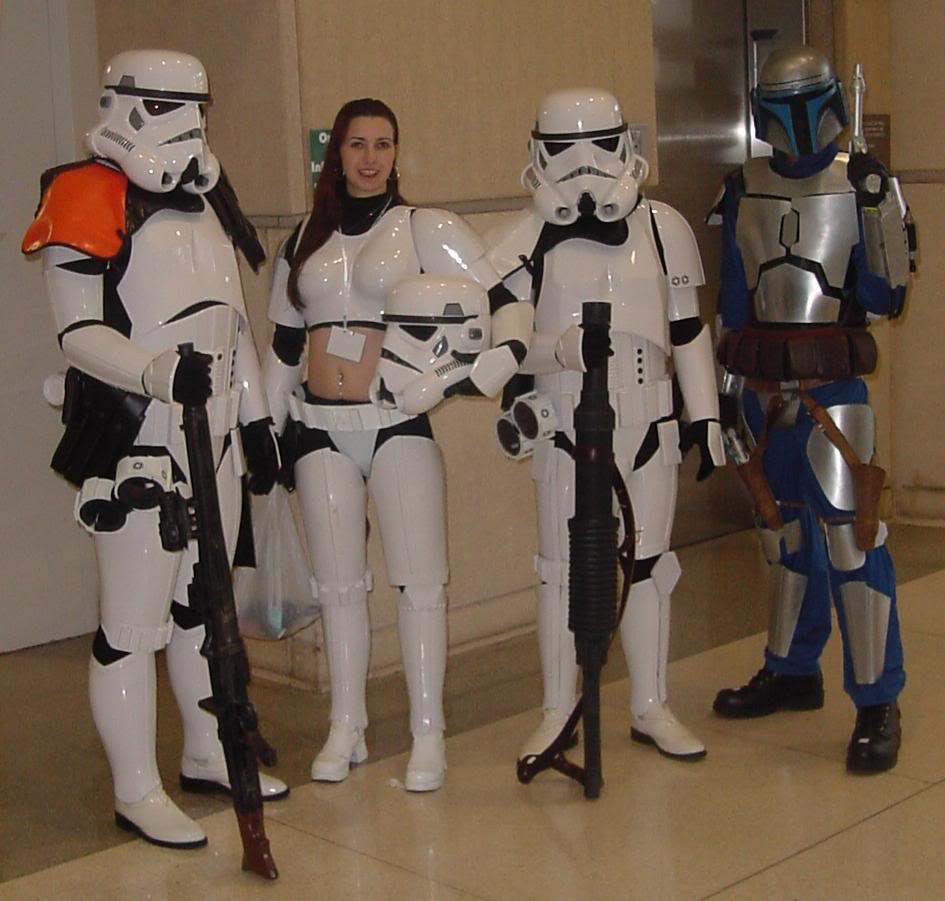 I don't really like the way I was standing in this pic, but I figured I had to throw the femtrooper in there. 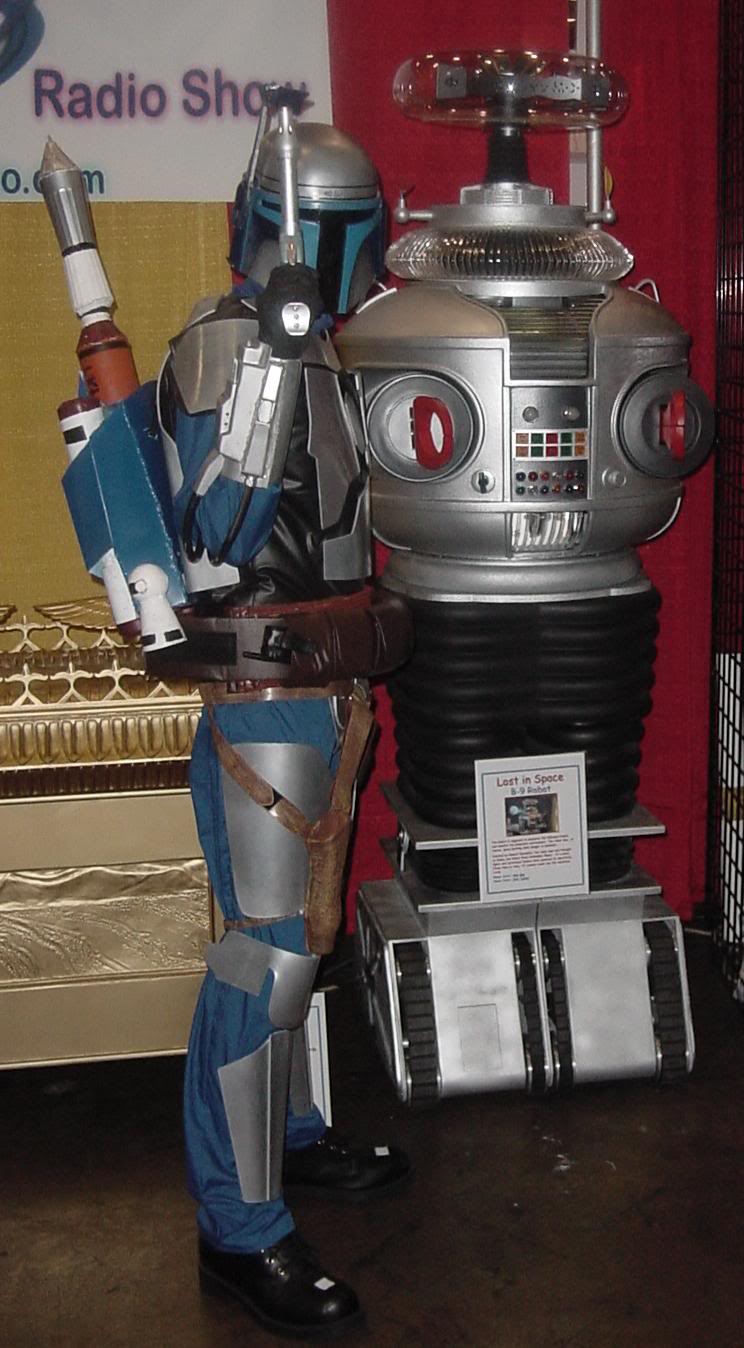 Now I know there is a fwe things I'm missing, such as the boot/shoe armor (which was alright at the beginning of the day, but began to come off so I just took it off), knee darts, the gauntlet dart, and some stuff was slipping down, but no one at the show noticed, so I am pretty happy. My jet pack also started to have some problems as the day went on so I had to take that off at about mid-day. But other than that, I am verypleased with this. Any questions or comments would be greatly appreciated. Thanks!

(special thanks goes out to ashtep, for the gauntlets, Mister_Fett_1975, for the helmet (That's a RUBIES! Great job!) Jodo_Kast for the armor (thanks for the discount man!) the company that made Rub 'n Buff , and everyone here who helped me out whenever I had questions and so on. Thanks everyone!)
T

i was at megacon as well. I was the other jango there. Arturo was there and took some pics so hopefully he can post my new version of jango as well.

by the way looking great there as well.

Nice costume!
Looks like you had fun there!
Love the mobile phone tucked in the belt there too!...

Master-Jedi-Allma said:
Love the mobile phone tucked in the belt there too!...


Well hey, that belt was made for ... belting or something. I didn't see any other Jango's there, but I was only there sunday, and I didn't stick around the whole time. Good to know there were other TDH'ers there though!

Cool, nice improvment! It's really coming along.Too bad I didnt get to see you there, so we could talk Jango,but alas I was only there Saturday. I did get to see TrooperKev though!

That femmetrooper is BLAM!!!! Wow, pass along my compliments.

Nice upgrade. I know you wiated a while for the armor - glad I finally came through for you. One small thing - you have the thigh armor on the wrong legs. Common mistake.

that femmtrooper would be nikki. she is a sweetheart. you should have seen her at dragoncon though if you like that pic. hey Mav what did you think of the new jango?

Whew thanks a lot for all the compliments!


Jodo_Kast said:
One small thing - you have the thigh armor on the wrong legs. Common mistake.
Click to expand...

I really wasn't sure about that, and just kind of guessed, thanks for correcting me, and the armor is AWSOME! Once again, thanks for all the kind words, it's much appreciated!

Three people I forgot to thank are secol_FETT for most of the jet pack templates, lisafett for her tutorial which also helped me in making the jet pack, and SEEKER for his photos which I used for refrence and his picture of his jet pack with paints which I used when picking out the acrylic paint used. Thanks again!
M

trooperkev said:
that femmtrooper would be nikki. she is a sweetheart. you should have seen her at dragoncon though if you like that pic. hey Mav what did you think of the new jango?


Are you kidding? Nice Job TrooperKev! I liked it alot I guess you missed my post on the FL501st boards complimenting you . Too bad we didnt get to chat much more than we did. It seemed like you were leaving the same time I arrived in mine, lol.

Nice job! AND let's see that pic of Nikki!
J

where did you get your helmet? thats what im realy interested in. And wow nice job on the improvment. you definatelydid a good job.

Looking much better...keep up the good work.

It's people like you and me who define the spirit of this thread. It's all about having a good time at the Cons! Although my Fett is not near as screen perfect like seeker or Mirax - - - We all stick by each other and encourage one another. We all know the blood sweat and tears that we put into this. Askywalker98! It is obvious you had a blast and for that I am happy for you. Will you be at Dragon Con 2005 this year?
I hope so.

Oh yea this is my recent Fett too. What do ya think?