I have constructed some peices to my Fett suit but its not to the 501st quality. I need some help here. This site rocks by the way! Here is what I have done so far.

Made from diagrams I found on the net.


Cardboard Templates for the actual armour.

I am basically broke right now so Any help whatever it may be would be greatly apreciated. I just moved to Oregon and my savings went from 3k to $78. because of moving costs. Man movers cost a lot!

If you wanted to send me something to get me started I will take care of shiping and handling. Thanks everybody!
Last edited by a moderator: Jul 23, 2017

Looks preety darn good actualy for a begginer, like I am, its very hard to afford all the stuff an get ready. If you dont need an actual flightsuit JCPennys.com has some work suits that work realy good for $30 or so + shipping. and for a over shirt my Local Wal-Mart had a dress shirt that worked awsome, as you can cut it off at the bottum to make it look like a croped off shirt and use what you cut off as a EXTREMLY confy neckseal. And if you need a cheap weapon Id get a Nintendo Zapper for a side arm.

TDH PREMIUM MEMBER
That JP looks really good!!!! Not bad work at all.

Now that cape, needs to be cut up a little and tossed in the washer a few times. That will dull the color out and give it the beat up look. But make sure you add the holes and stuff like that before you wash it. Might take you 10 times to get it where you like it. Looks great so far, keep up the good work.

Are those the armor peices you plan to wear or are they the templates? No offence but if those are the peices you are wearing then you need to replace them if you really want to join the 501st.. they look.. well.. in lack of a better word, crappy. I'd use those for templates and make new ones out of Sintra, metal or fibreglass.

But this is just my opinion, the rest of the stuff looks great. I love the JetPack. But as long as you are happy with what you've got then that is what counts..

what are the armor's made from?

The 3 most popular materials are

Sintra -reinforced expanded PVC sheet
There Is a Problem

Fiberglass- Gelcoat is sprayed in then fiberglass Cold or Warm resin compound is added with fiber sheets
Fiberglass Warehouse.com


I dont know if your going that elabrate or not but my first Fett costume didnt look as good.

I updated the details of the linked pictures above. The armour is only a template. I have no idea if they are to scale I just took the pattern off some pictures I eyeballed off my Behind the Scenes book on Star Wars.

dam that jp looks sweet man, do you have more pics of it in "the making"? shiest

I am having a hell of a time finding the jumpsuit for Boba Fett. I looked in the JC Penny catalog and they are all dark colors except for the white one. I have a pair that are navy blue with paint on them that I use for working on messy projects. The material cant be dyed or lightly bleached as far as I can tell... Any ideas? I want the desert tan color. ROTJ edition

Check out my web site if you want to trade Mandalorian stuff for what I got on my sales page. I cant afford to buy everything. Im really going to have to make the dollar stretch from one galaxy to the next.
Raptor Arts Studio quality hand-crafted goods

I currently have a 1995 Boba Fett Helmet, Jet Pack, Armour templates but they may be inacurate on size, and thats all...
Last edited by a moderator: May 6, 2005

It's simply stunning how that cardboard/papermache jet pack turned out!

I'm really thinking of doing it too before EIII to complete my Jango.

For the suit: I would take the white one. There should be no problem with that dyeing it the color you want.

I am going to get some thick off white canvas/nylon material to make the vest. I will have to get that cheerleader pattern and make it (boy that sounds wierd...) I just ordered some JC Penny BIG MAC white Coveralls for the jumpsuit. It says white but looks more like its an off white.

Does anybody have a spare "T" Visor they are wiling to let go of?

How am I going to form the armour on the back, groin and but properly. Those look tough!

Did my thread die or am I just being impatient? Probably impatient because STAR WARS EP3 Is coming out in 10 DAYS!!!!

Sheesh I fell like I am talking to myself here lately

Anyhow heres an update. I found the same exact girth belt that Boba Fett is wearing so I bought it. I would have rather had it pre-dyed but nobody has been paying attention to me lately.

TDH PREMIUM MEMBER
Calm down stud, not every one here is on every day reading everything. It takes time dont be in a rush. Use the search trust me youll get a quicker response at times using that.

Sorry but i am stressing because the movie is coming out in 8 days. I am on the computer almost all the time doing research, reading forums and reading email. A good 6 hours a day but not all at once.

I want my suit to look like the ROTJ version. Grey/tan canvas color jumpsuit.

*On the good side When I finally received my 1995 BOBA FETT "Don Post" Helmet I was supprised to find that what I bought was actually better than what I thought. IT is made of the White plastic/Vinyl !!! Score!
Last edited by a moderator: May 11, 2005
M

Boba on a budget

Mmmmk, I'm also poor. In fact, I really don't think you can get much more poor than a college student that's paying their way through. Here's some money tips. First off, go to the search tool and type in "Trash Can Armor." It'll cost you 20 bucks at wal-mart total, and it works great. Second, for the jump suit I used a dickies coverall from--you guessed it--Wal Mart--$30--pretty much ROTJ grey. Unfort. b/c I live in a big city, I had to order mine online b/c I guess ppl in cities don't need coveralls so my walmart didn't stock them? Third, you're going to need a bucket (helmet). Head to ebay and type in Don Post Boba Fett. You'll get a listing of a couple helms depending on the day. TRY to get a DP95 or 96--they're made of a better material than the later models. I was TOLD I was buying a 96', but it's stamped 1997 on the back :facepalm ....I think it was an early 97 cause it wasn't square and holds it shape pretty well. Instead of getting hella pissed, which is what I almost did, I just reshaped it, gave it an awesome, unrushed paintjob--(a don post 97 can look twice as good as a "Movie Sized" helmet if it has a signif. better paint job) (Of course that's just my humble opinion) Let's see heeere, for a blaster. . . I spent 12 bucks making one. It's not BEAUTIFUL, but it made the people that were walking by when I was painting it give me that, "what are you doing with that deadly weapon?" look. I took the butt of an old pellet gun, a 6 dollar cap gun from wal-mart, a foot of 1 1/2" PVC, PVC cupling, a three foot "corner saver" (the plastic thing you put over corners on high traffic areas of your house to keep them from getting all dented up), the metal end of a busted light bulb, and a $7 scope from wal-mart. Here's a couple of pics so you know what everything looks like. Hope this helps. I know this forum has been a life saver for me. Some things you can't skimp out on, like the gauntlets, but I got mine from this forum for a steal. Check out the cargo hold too . 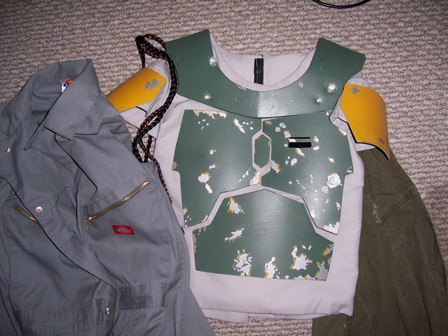 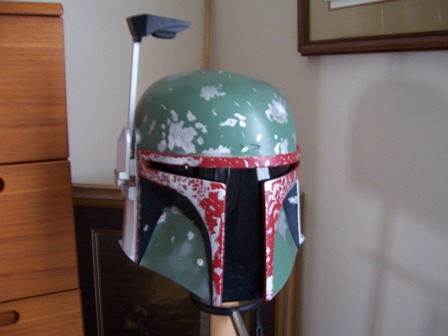 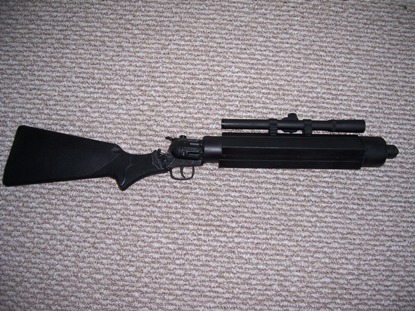 Mr. Miggs that is Some Great advise for a Newbie from a Newbie....Looks like you've done your homework...

Glad I could help

Thanks for the help on the blueprints for the armour. I have my Armour cut out and ready for the battle damage. Now what was the proper green color? I have Krilon "Italian Olive" green. I think a couple years ago I read that it may be Spruce Green but dont know for sure.

Heres the Trash Can

And heres the Armour

Heres a picture of my White Vinyl Helmet.

I am going to go down to the plastics shop and see if they have any scrap Smoke black plastic that I can see through. This is the lamest lense ive ever seen. Anybody have a T-Visor handy for cheap?
Last edited by a moderator: Jul 24, 2017