Well, I haven't looked on Ebay in awhile for Nemrods, but on a whim I looked Sunday. I found 2 going pretty cheap. Bid on it, and forgot about it. Day after I'm checking my email and whadaya know, I won! I hope to convert this into my new ESB sidearm.

Anyone tried converting one of these?

WOW! Great score! Keep us posted on how the conversion goes.

Wow! This seller was fast! It arrived today. I like it!

Attached are a couple of close-up pics, and one I photoshoped the changes I plan to make to it. 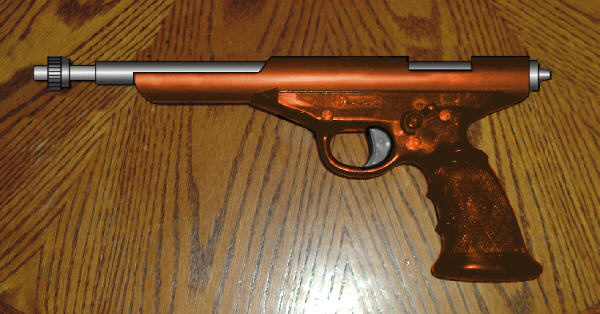 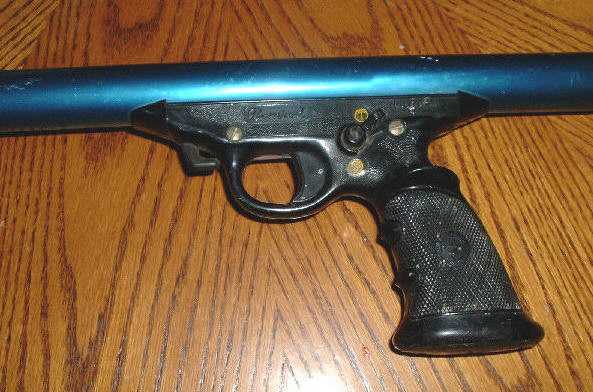 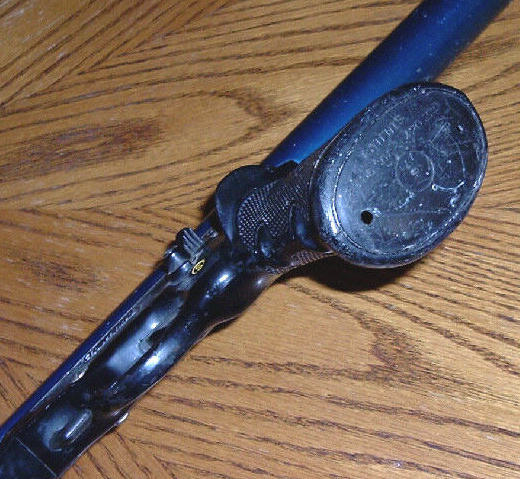 I think the back of the gun with the silver thingy on it, should be cone shaped...

but this looks very cool!! and it's probably better and easier to make.

OK, now check this out. I was doing another serach to see if I could find an actual holster, and came up on another auction. Totally different looking gun, but jumped out at me was the spear that came with this one.

It looks as though maybe the tip of the gun could've been made from the spear itself. Check these out.

I borrowed a picture from Bradleyfett that shows better picture of the nozzle. I'll take it down if you don't want it up. 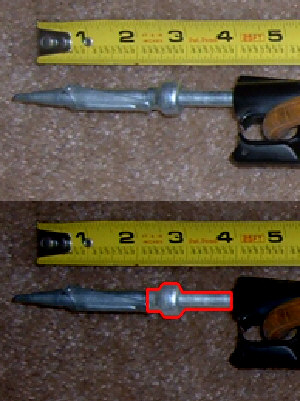 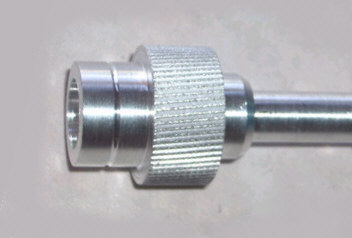 I definitely think you're on the right track with the barrel of that second gun I'd like to see some better photos of it.
J

hey chek out these ones too. srry bout posting live autions i thought it was important though http://cgi.ebay.com/Nemrod-spear-gun-Clipper-made-in-Spain_W0QQitemZ7183936494QQcategoryZ47353QQssPageNameZWDVWQQrdZ1QQcmdZViewItem http://cgi.ebay.com/Nemrod-spear-gun-Clipper-made-in-Spain_W0QQitemZ7183937353QQcategoryZ47353QQssPageNameZWDVWQQrdZ1QQcmdZViewItem
Last edited by a moderator: Sep 19, 2005

Update: Started cutting on the tube, and I reworked the butt of the grip to square it off more. I'll probably square it up some more, but I thought I would share some pics. 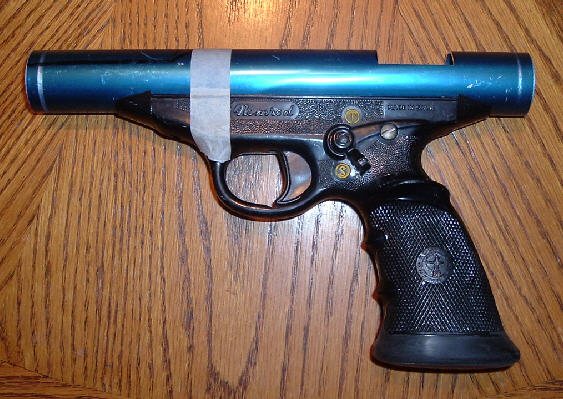 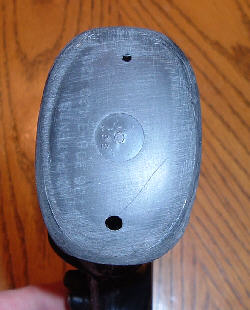 Looking good, can you snap any better photos of the barrel and the other side of the grip?

I was hoping to find a better scan of this, but we'll have to wait for the book. This shows the grip shape really well, and you can see a couple circular details on the side (thanks TD).
http://img138.imageshack.us/img138/6633/fettesb6dt.jpg

This thread had me so excited...but alas I was out bid by $5 for an identical spear gun...BAAAH!!!!

That is a great score on the Nemrod....I do think it was positively identified as the Bespin blaster however. Fett's on the other hand has a squarish shape to the butt of the handgrip....thus leaving out the Nemrod as a possible source.

Not trying to be overly critical,but just in case you wanted to make an accurate Bespin blaster it's not too late. There has been a dead on Fett blaster made up to mirror the Marmit Fett's sidearm blaster if you're going for ESB accuracy.

I too have an old Bespin blaster resin kit that I had made into a Fett blaster when it was still thought of to be the same......I've yet to convert it

Also FT, you know the model of that nemrod you got, I really want to get my hands on one, Thanx

Nutcore said:
Is Fett's sidearm the bespin blaster but with the top and front cut away?
Click to expand...


No...by looking at the very limited reference of ESB Fett it is discernable that the butt of the gun is in no way the same shape as the same Nemrod as the Bespin blaster....it very well could be a spear gun or even a Nemrod for that matter....just not the same as the Bespin

Yes, I love Mardon's work, too. My current sidearm is modeled after the Marmit/Mardon's build up of it. But I have a question, I know the marmit has a lot of details in it, but what makes everyone think that the pistol (which barely has ANY reference pictures) is dead on accurate? I mean look at the other guns created for the OT. They were all based on real guns. The E-ll, Han and Luke's pistols, even Leia's guns were all based on and made from real weapons.

The Marmit gun just doesn't look like it is based on a real gun. Don't take my tone here wrong, but I just want to know why the general consensus us that the Marmit Fett is THE source to go to? Did they actually get the props to base their work off of, or is it just from pictures or something?

I mean the more I look at the other gun that Graeme was interested in, the more I see where they could've created his gun from it. Check out the attached photo I quickly through together. With a couple of pieces of sintra glued on the sides, and using the end from the spear, you could throw a halfway decent version of the ESB sidearm together out of that one.

I'm almost positive (as one can be with such limited knowledge and info) that the real prop was based off of a spear gun. Another correllation - look at luke and Vader's sabers. Both of the flash guns. Droid callers - flashguns. Look at at Fett with the various dental pieces strewn about. My thinking is they made a couple of sidearms for the Bespin scenes...Hey they needed a couple of guns...One is made outta a spear gun the other...could be.

I, by no means, think I have the "correct" gun base, but I wanted to try this little experiment out. Without more info, i'm going to try and match the Marmit's general layout, but with a real world base. Please keep the comments coming, they keep me thinking .

Graeme - I'll get the pics you wanted to see tonight after I do a little more work to it.

Nutcore - I'm not exactly sure. The round dot in the center of the grip it has "Equipo - Nemrod", but on the right hand side of the gun near the barrel it has "Fusil Oleoneumatico". Your guess is as good as mine. 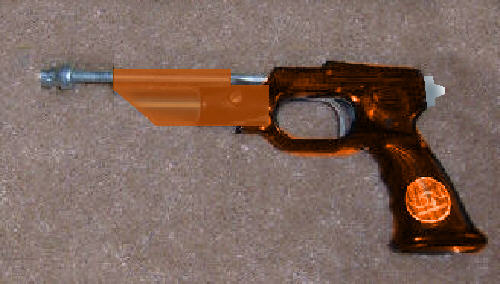 I think that by the similarities seen in the screen pics of ESB and the Marmit it was just agreed upon around these parts to get something that is accurate to "something".... Funny thing is that my Bespin/Fett buildup is waay better than my Mardon/Marmit.

I think that the Marmit based sidearm lacks "greeblies" which gives character to the weapons of Star Wars. When it comes time for me to rebuild my Mardon/Marmit sidearm I think I'm going to add some greeblies to it for a little flair of Star Wars.....8)

DL44 Blaster said:
I think that by the similarities seen in the screen pics of ESB and the Marmit it was just agreed upon around these parts to get something that is accurate to "something"....
Click to expand...


Well, I was just wondering. If they were using the same ref pics we have then yeah, its pretty accurate considering all you can see is the butt of the grip and the tip of pistol.


DL44 Blaster said:
Funny thing is that my Bespin/Fett buildup is waay better than my Mardon/Marmit. I think that the Marmit based sidearm lacks "greeblies" which gives character to the weapons of Star Wars. When it comes time for me to rebuild my Mardon/Marmit sidearm I think I'm going to add some greeblies to it for a little flair of Star Wars.....8)
Click to expand...


I have to agree. Any other SW prop has greeblies galore on it. I plan on adding some greeblies too. I have a few choice ones picked out now. Heck, if it turns out pretty good, I may just do a mold of it, and make a few copies if anyone is interested.

Sorry about no new pictures. I haven't had a chance to work on it any over the past few days. I'll try and get something accomplished this weekend.

Ok. I got the rest of the barrel removed, and cut the inserts for the new barrel. I'm probably going to use bondo to fill in the gap between the old and new barrel.

Oh, and Graeme here's the picture of the other side you wanted. 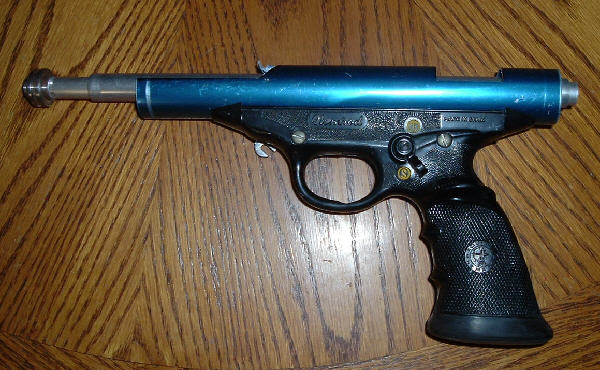 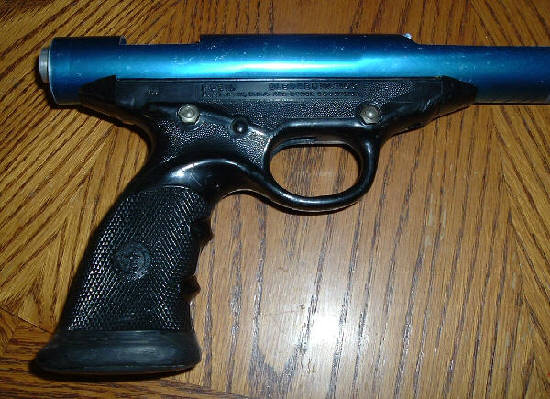 WOW! That came out awesome! I can't wait to see it painted and finished. Still lookin for one of those harpoon guns, aparently they are hard to find:facepalm

So that's what it was made from! Yours looks almost the same. Nice