Hello! I'm a newcomer to this forum, although I have been reading it for ages, as I gathered up enough nerve to actually plunge into prop making. Just a few weeks ago, I decided to build a vacuum forming table and heater system, which, after a few wasted sheets of styrene now works like a charm! I'm in the process of putting together a video of my setup as we speak.

Over the past few days I decided it was time to get some serious mould making done, and went to my local Canadian Tire (yes, I'm in Canada - how did you guess!) to get what I thought I needed to make a mold...... 4 trips later, I'm still in need of more materials lol.


So, equipped with my newly built vacuum forming setup, and scraps of knowledge I acquired from youtube, whitearmor.net, and this site, I decided to tackle a Fett helmet project. However, soon I realized the magnitude of the job was too great for a first project, (and that vacuum forming might not be the best way to go about it after all), and settled on something smaller and simpler to start. So, I designed this insectoid/mandalorian-esque bounty hunter mask that I made up, basing it loosely around the mask of Revan. Here's how it was done.

(By the way, I posted this same thread on whitearmor as well, for those of you that are on there, because I want to get as many people's opinions and tips as I can, since I plan on doing a LOT more projects in the very near future!)

I started with a few sheets of scrap HIPS, both .06 and .08 guage, and cut out the pieces for the nose bump.

... and glued them together.

Next, I created the sides from more plastic and spare garbage around the garage, and covered it with Bondo.

Next, I sanded the face, and vacuum formed the dome (out of an old Boba Fett Don Post cheapo helmet I cut up a while back), and stuck it on with more Bondo.

Some more Bondo later (Bondo and I have at this point became best of friends), and the helmet started taking shape.

Next, after everything was sanded down (hours of sanding, and applying polyfilla - yeah, not the best choice as I soon discovered, but it's all a giant learning curve as this is my first project), I primed the mask to see if there were any trouble spots.

Priming turned out to be a BAD IDEA! I got too impatient, and went straight to my vacuum forming table.... needless to say, while the pull turned out to be good, the mold was quite damaged. I didn't take a picture, but when i peeled the plastic off, the primer stuck to the mask due to the heat and pulled up some polyfilla with it. I ended up doing some more research, and decided to stick to bondo, and purchased some epoxy putty for the fine details.

Another problem I ran into, as you can see from the photo above, the mold is hollow, and I didn't think to build it up to make the pull smooth. So, once formed, the plastic wrapped itself around the edges, making it an absolute nightmare to remove. I had to very carefully cut it off, which ended up damaging the mold further.

When I finally had my mask cut out, I decided it was too wide; so I heated up above the heaters i use in my "oven box" and squeezed it until it took on more of a narrow shape. I then glued a plastic strip to the brow to bring it out a bit more, and built up the nose piece with more plastic to make it more prominent.

Once that was done, I covered the inside with plaster of paris to make it rigid, and built up the edges to avoid the problem of the mold getting locked in during a pull.


The next pull was a success, although the plastic brow and nose piece came loose after I moved the mold, which made me realize I needed to solve the problem of mold damage after each pull. So, I poured bondo inside the mask, and I mean I loaded it in there! When it hardened, I broke off the plastic, and had my mostly-smooth, sturdy, reusable mold (which would have to be sanded and built up a bit before it could be pulled over).

Finally, I had my mask and began the next step, which is painting! I love painting!

And, finally, after a day of painting layers, and detail, the mask is done! I ended up cutting a slit down the middle of the nose to give it that mandalorian-esque look, and did some more painting! I painted the inside black (next time I'm going to use black HIPS, since I prefer the insides of my lids black), sealed everything, and installed a green visor which I cut out from a bunch of face shields I bought on ebay for my TK lid project.

And finally, me wearing it. The black hoodie is to simulate what it would actually look like if worn with a dark lord style hood lol. Not the same, I know, but you get the idea.

When the strap is tightened, it squeezes the mask to the sides of your head and makes it look even more narrow, which gives it an insectoid look.


So that's it! First vacuum forming and mold project complete! Next, I'm going to do an actual Revan as well as Darth Nihilus masks (which I have already laid out the plans for), and go from there! I think I may create armor pieces for this mask as well, and do an actual costume out of it. The ultimate goal, however, is to do a good Fett Helmet, as well as an accurate stormtrooper lid.
Last edited by a moderator: Aug 2, 2017

Amazing project and an excellent mask! If this is your first one, then I can't wait to see your future projects! Awesome job!
R

WOW!!! Great first project. I have been thinking of getting into vacuum forming. Were there instructions on how to build a table out there? Sounds like maybe youtube is a good place to start. Nice job on the mask. Looks great!
T

SDmicp said:
WOW!!! Great first project. I have been thinking of getting into vacuum forming. Were there instructions on how to build a table out there? Sounds like maybe youtube is a good place to start. Nice job on the mask. Looks great!
Click to expand...

Here is My second project: Darth Nihilus mask (version 1). I got the middle ridge wrong, and am reworking the mold to make it more accurate. I decided to hastily paint this one anyway to have an idea of what the final product will look like.

Progress on the Sith Acolyte mask. Basically, the whole thing is sculpted out of bondo over my bounty hunter mask mold from the very first post in this thread (also made out of
Bondo). The mouth and nose pieces are shaped with scrap HIPS strips, and bondoed over.

Going to build up the edges to give a few degrees of a rise for when I get to the vacuum forming stage (if I end up vacuum forming, that is).

Thank you. Reading this thread last week inspired me. Then one night after work, like magic, I found all the lumber I'd need out on a sidewalk by my car to be picked up by the garbage men. There was a piece of pegboard, a couple of 2x4's for the sides, a laminated 1" thick sheet for the bottom, and some plywood scraps. A friend and I got most of the box built today. An unused attachment from my shopvac is mounted inside so the hose will attach securely. We caulked around all the seams (and a few nail holes in the 2x4's). It's not ideal, but it should work and I think the usable area is 2ft x 1.5ft. Next week when I have time we'll get started on the frame to hold the plastic. I still can't believe it was practically free. I think I added $5 worth of "L" brackets/screws and I had to buy a $5 tube of caulk.

I haven't decided how we'll be heating the plastic. I might have enough lumber left over to build a box around a space heater. I hear that's the most efficient way to do it. I also don't have anything right now to form with it. I'm probably gonna start sculpting a set of stormtrooper armor. It's not big enough for chest/back, but almost all the other pieces can be done this way.
S

All pretty impressive. I should really get started on making a table. What did you use for a heater in the end?

This is what my table is looking like. I guess it's more of a box than a table. I'll probably pull the heavy duty dj equipment stand out of my car when we use it. That thing should be able to support the weight and be stable enough. I think tuesday is when my co-armor builder is scheduled to come by and help me make the top frame and heater box.

For a heater I used two 1200W patio heaters, which I put inside a wooden box, lined with tin foil. At the moment I have to plug the two heaters into two separate circuits as to not overload the breaker; eventually I'll get a proper setup going, but for now, everything works like a charm.

You can check out my video of my Sith Acolyte mask build, where you can see my vacuum forming setup in action here:

Masks look great! In the process of building my own vacuum forming table in my workshop. Looking forward to seeing more projects here.

All masks that I set out to do in this thread have now been completed: 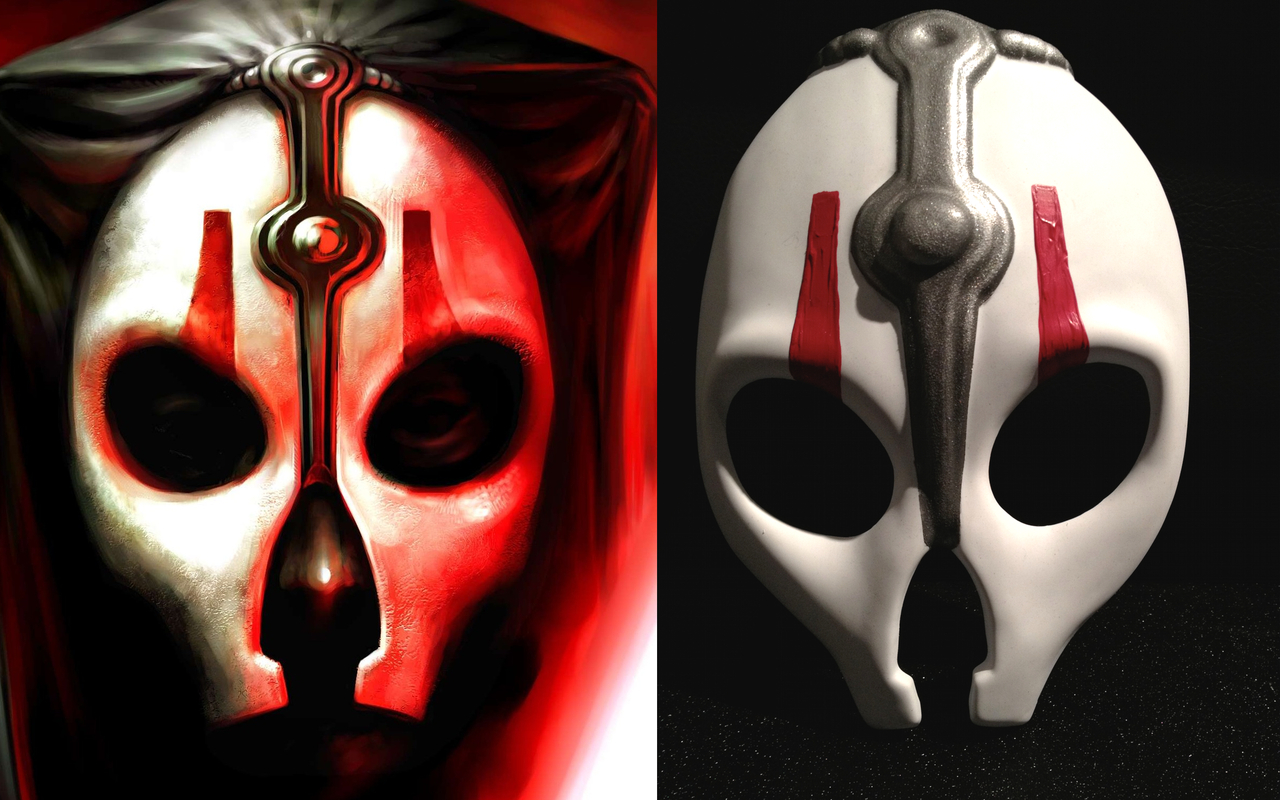 GEEZE, you've got some great masks!

For anyone that's interested in my vacuum forming setup, visit my website
http://thedrunkenmynock.com/. I have an entire section dedicated to vacuum forming, outlining in great detail what I've done and how I did it.

3 months and a lot of failures, but thanks to the tutorials on Mynock's site and StudioCreations, I finally got something useful out of my vac-forming setup! I cannot say "thank you" enough. I'm picking up an 8ft x 4ft piece of ABS tomorrow, and I'm working on new molds tonight.

S
Making a Silicone mold of a complex model with crossing limbs? Help!

Best molding and casting materials for a Fett lid
2