I was going to wait till it was finished, but I've been too busy with work to get some paint to do the little white symbol. Here's my heavily modified MB pack. Some of you who have seen my pack in person may have noticed how much it's been through (attached a photo of it in action at ROTS). After assembling it in one night before going to a con in November 2003, I never got around to working on it again. Until now.

I basically took the whole thing apart, reglued the seams with CA rather than GOOP and smoothed with Bondo, actually took the time to WASH the resin pieces and sand them smooth before painting. The important thing of course is to take your time. Oh, and I have a new found love for 2-part epoxy putty.

One thing that bugged be about the MB kit was the top of the side tanks, they just never really lined up with the top caps, and didn't go up high enough. I cut them out, and replace them with some PVC pipe connector which was the same diameter as the caps. Also in one of the photos you can see the rectangle detail in the centre that is missing on the MB kit.

For the painting, painted the whole thing with Testors Chrome. I liquid masked the scratches, and for the green I used Panzer Olivegrun, same as the helmet. The yellow is UP Armour Yellow, like on the shoulders/knees, the red is some mix I made on the fly with some red and black. After, blackwashed it all, did some brown wash on some spots which are eveidently brown in photos, and then some minor black spots here and there.

Hope you guys like it, I'll get around to posting photos with the beacon and the white symbol once I have some time! I also need to made the thruster stripes a bit wider 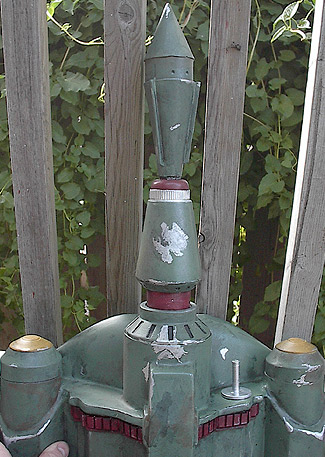 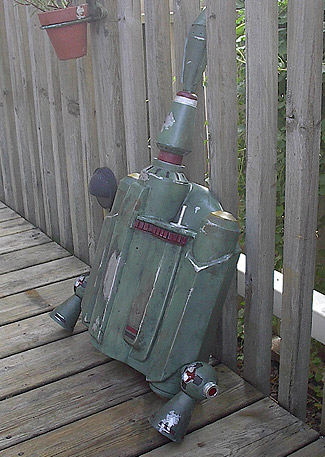 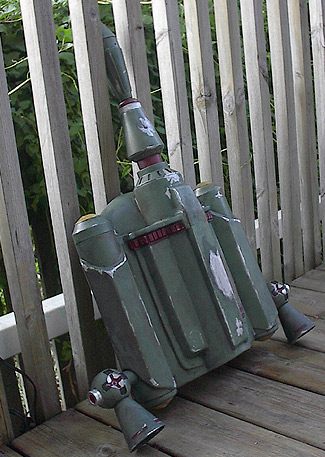 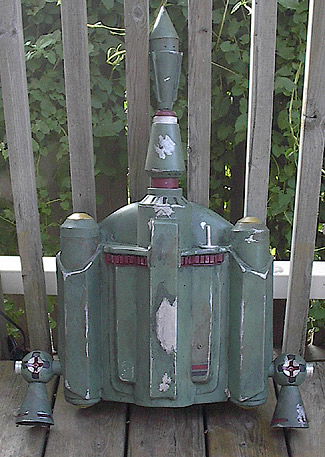 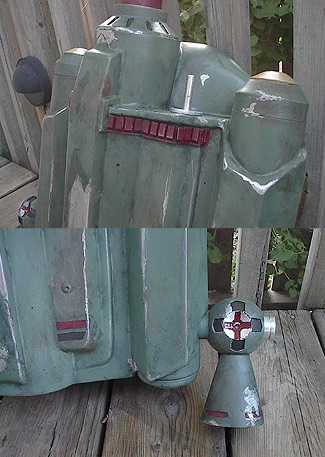 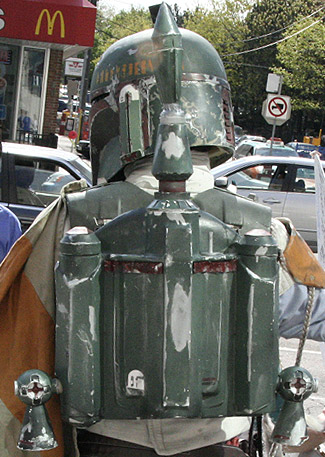 Graeme . . . .You have always been an outstanding - - - yet humble source
for your Boba Fett. And even though you have the best Fett suit out there - - -
you always state you have a work in progress. You are very well admired here because most of us know that you started at a grass roots sort of level. And from that point on - - -we have seen your suit evolve to one of the most accurate Fett suit out there.

Oh yea! The Jet Pack!
The weathering is awesome.
Gives us the idea that you have been kicking some serious Jedi Tail!

but anyways, the center "stripe" from top to bottom is significantly smaller then yours, myn is terribly inaccurate.

Did you alter that or did MB alter his jet pack design??
Last edited by a moderator: Jul 24, 2017

I'm also interested in the top caps and the PVC piping. I too have a MB v2 jet pack and was never happy with how it connected at the top. I ended up having to use a ton of bondo.
Last edited by a moderator: Jul 24, 2017

Good job Greame! you've got a great eye for the fine detail.
Last edited by a moderator: Jul 24, 2017

Thanks guys, your comments mean a lot

Bob, the little box near the piano keys was just a piece of sintra, and I Bondo'd the seam since it's supposed to be part of the main body.

Here's a crude diagram for the mod I made to the side tanks. I hope it make some sense of what I did.

Crude.. what's crude about that!

That was SO drawn on a napkin AND in crayon! I just have a steady hand.
And a very sharp crayon.
And Photoshop
Last edited by a moderator: Jul 24, 2017

I would poke at you more.. but I have to keep you friendly so I can steal... err... borrow your paintjob when I upgrade!


Jango_Fett_Jr said:
That was SO drawn on a napkin AND in crayon! I just have a steady hand.
And a very sharp crayon.
And Photoshop
Click to expand...

that is very nice, i love the pic with mcdonalds in the backgroun, so not a star wars feel lol
Last edited by a moderator: Jul 24, 2017

Looks great!! I too used the Panzer Olive Green and was ecstatic with the results. Great choice and great pack

Thanks JFJ... I don't care how old this thread is... I just finally found a picture of the widely unpopular ESB jet pack painted!! I can have mine for Comic Con now..
Last edited by a moderator: Jul 24, 2017