These parade gloves have a button on the wrist. Have we seen them befor?

Actually, the original gloves were pretty much just that-- a white (most likely) dress/parade glove. You could probably modify the snap to be a button if you wanted to be accurate, but I think it might make a pretty good base. That's probably the modern day equivalent of the original prop glove.
Last edited by a moderator: Jul 24, 2017


tylerdurden wrote:
Actually, the original gloves were pretty much just that-- a white (most likely) dress/parade glove. ..
Click to expand...

Yeah, check out this photo from Braks reference library. It looks like they added a little extra for a gauntlet, plus the hand-stitched pads. 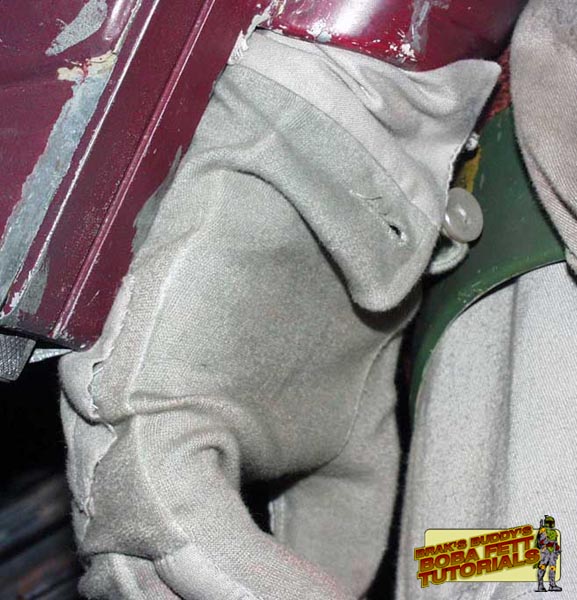 
Kinjo wrote:
Those are kind of cheezy.
Click to expand...

Actually, I happen to know first hand they work very well for a base glove since that's pretty much what they used on the originals.

Although I didn't get my base gloves through there, my newest batch of base gloves are almost certainly identical. I don't know how folks getting my gloves will respond to the inconvenience of having something extra to fasten in addition to the velcro, but they will "look" closer.
Last edited by a moderator: Jul 24, 2017
J

I've been in the military for over 15 years now, and it's true: things change with the time, including the uniforms we use. During the time I've been there, I've seen two changes in the "Dress Green" (the semi-formal, good-looking suit) in different kind of fabric and quality, as well as the BDU's (normal camouflage uniform you see most of the time), and I think that Tyler is right about the construction of the glove itself...It probably was a Parade or Ceremonies kind of glove, which I think I've seen them somewhere long time ago...but just like I said about the uniforms, some things change, as I think it happened to the gloves as well before I joined the military.
And I think and my theory about the originals is that they were made exclusively for the movie's character, and not some kind of glove that you could find anywhere, like someone said in another thread, -..."some kind of ski gloves..." or "welding gloves"....now with the Ref CD on hand, plus this pic just posted here...all I can say is that S1 is the closest one (perhaps the better) in making this gloves in the forum, and maybe anywhere!

I think I'm going to give this a shot too. I also found a portable sewing machine at Big Lots today that looks like its small enough to fit into the finger area of the glove which would take the hand-stitching out of it and make it easier.
Last edited by a moderator: Jul 24, 2017

I found these sights for gloves as well. They are all seem much the same although some look to be of slightly higher quality material and workmanship.
Cheers,
ST

I followed Chrima's idea for gloves and they turned out pretty good. I got white ones and dyed them gray using black Rit dye. I'm not nearly the seamster Chrima is, so these took a long time to do. I would recommend getting the longer 12" parade gloves so they stay tucked in your armor. Here's a reference photo 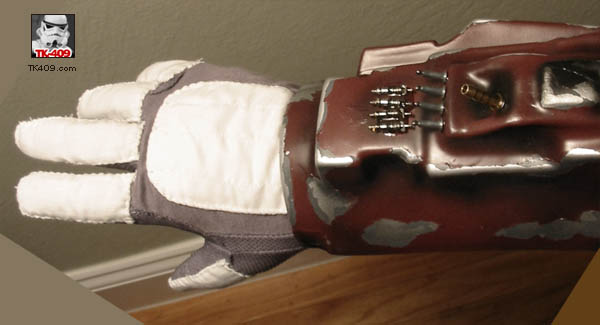 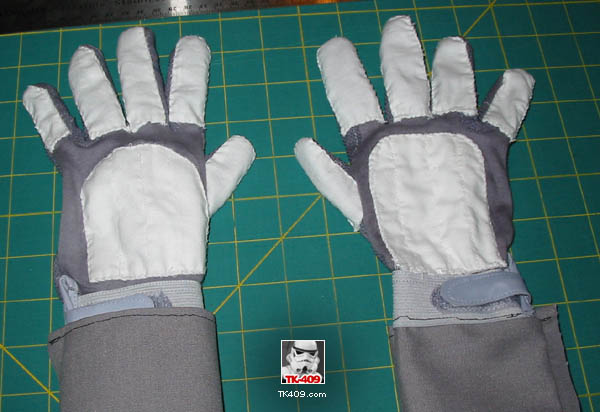 Wow, you're just ripping into this costume man

Very nice gloves, they don't look poorly sewn, and from a distance no one is going to care anyway. Colors look good, patterns look close enough, chalk up another $100 saved

Make me feel like I'm throwing mine away left and right with my costume lol...

As always, you do nice work.

Thanks! I still have to weather them - any suggestions? It's been very rainy lately so I have no access to dry dirt.
Last edited by a moderator: Jul 24, 2017

Seriously, it drys like a chalky powder, right? Just paint it on something, let it dry and wipe your hands with it. That or charcoal pencils of varying colors.

Or just wait for it to clear up,

They look great . Just to show that it doesnt have to cost alot to look nice. Its the rugged look like Boba is supposed to be.
Last edited by a moderator: Jul 24, 2017