droidbait said:
What a super cool build thread. Love it!
Click to expand...

Karasuryn said:
This is excellent! Thanks for sharing and keep up the great work!
Click to expand...

Thank you very much for the kind words!

Today, I finished up the aluminum tanks! I'me very pleased with how they came out. Sadly, I did very little documentation of the paint up. However, here's a quick rundown of the process. First, I had the top and bottom caps of the larger tank machined out to reduce the weight considerably. I cut out the windows of the tank with a die grinder and had filed them out to the finished size. Admittedly, the larger window ended up being about 1/8" too wide. I did my best to match the radiuses of in the corners with a small half-round file. I then bolted the the tanks to the back plate to confirm the positioning before welding the whole apparatus together. We machined the small hose fitting on the top of the smaller tank out of a piece of 3/4" 6061 aluminum hex stock. I think it could actually be made from 5/8" but I'll deal with that at a later time. The tube that bridges the two tanks is made from .500"x.065" 6063 aluminum round tube that I had to make little cuts with a band saw to bend since I couldn't find a bender capable of making such tight radius corners. I just filled in the cuts with Bondo after the tube was welded in place. I had to glue the window backing and aluminum circular greeblies (5/16" diameter if anyone is wondering) in place since there was a risk of burning through the thin wall of the tube if I was to weld it. Everything, including the inside window edges, were hand sanded with 120, 200, 400 grit sandpaper and then finished with 0000 steel wool. For the model greeblies, I used toolguy's prints from shapeways. Once everything was glued in place, I premiered it with some spare automotive primer I had laying around. The paint work started with coat of Humbrol Matte 33 Black enamel. Then I basically just wore it away with a combination of fine Scotchbrite, 0000 steel wool, sandpaper of various grit levels, files, and a sharp pick. Once the main damage was complete, I dusted in some brownish tones, a tiny bit of gray from the bottom cap, and the pale green from the large tank's greebie window. Then I used some stencils for the "lettering", and used steel wool to tone back the overspray to an appropriate level. Lots of other small detail work I won't bother you with but in the end, I'm extremely pleased with how it came out. Having an aluminum base was a pleasure to weather and worth the effort of making them custom. The snaps are 20mm and I found them on ebay. I think they are the perfect size. I couldn't really tell if the was another leather strap that comes of the bottom to attached the tanks to the chest armor but the CRL pictures led me to believe there was so I added that as well. 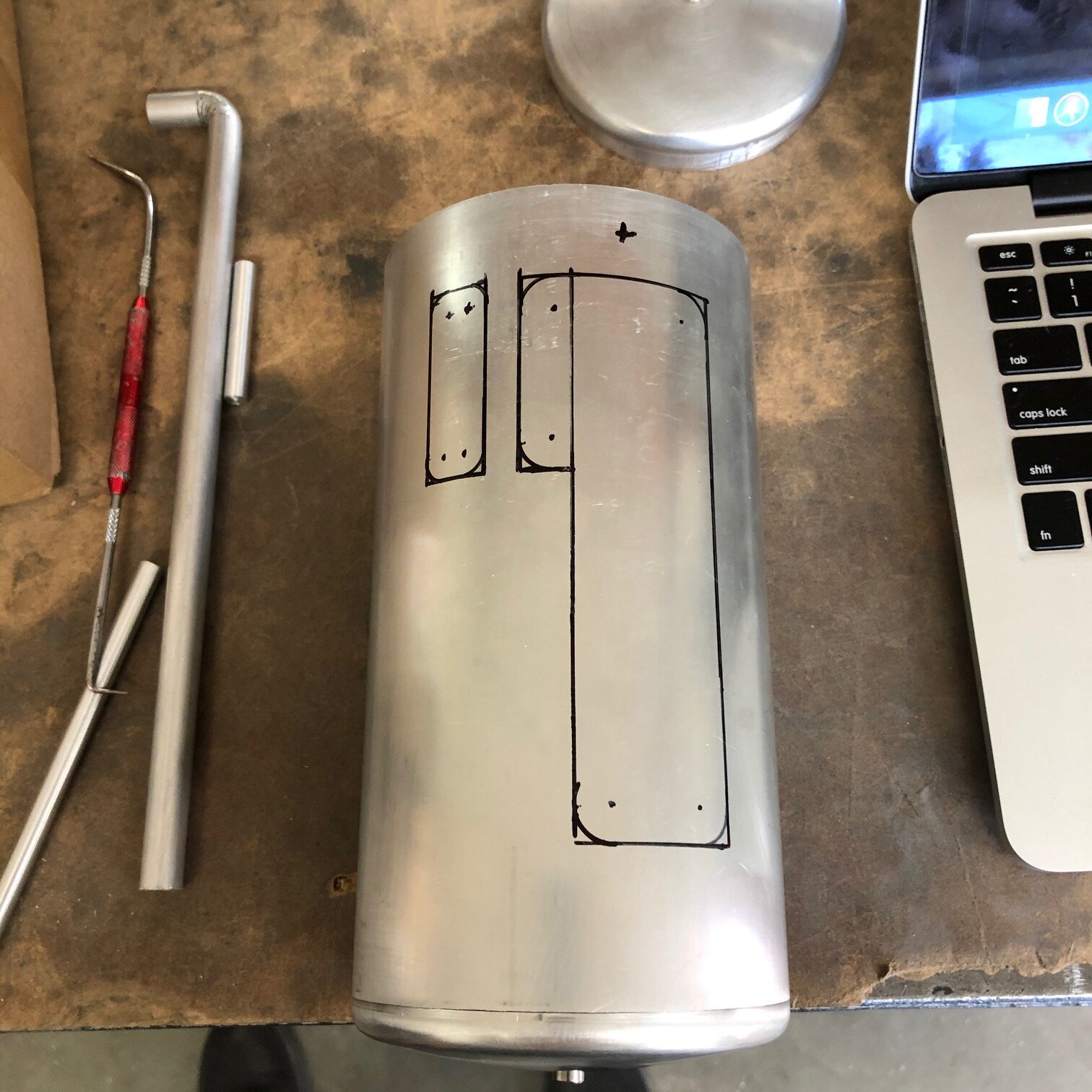 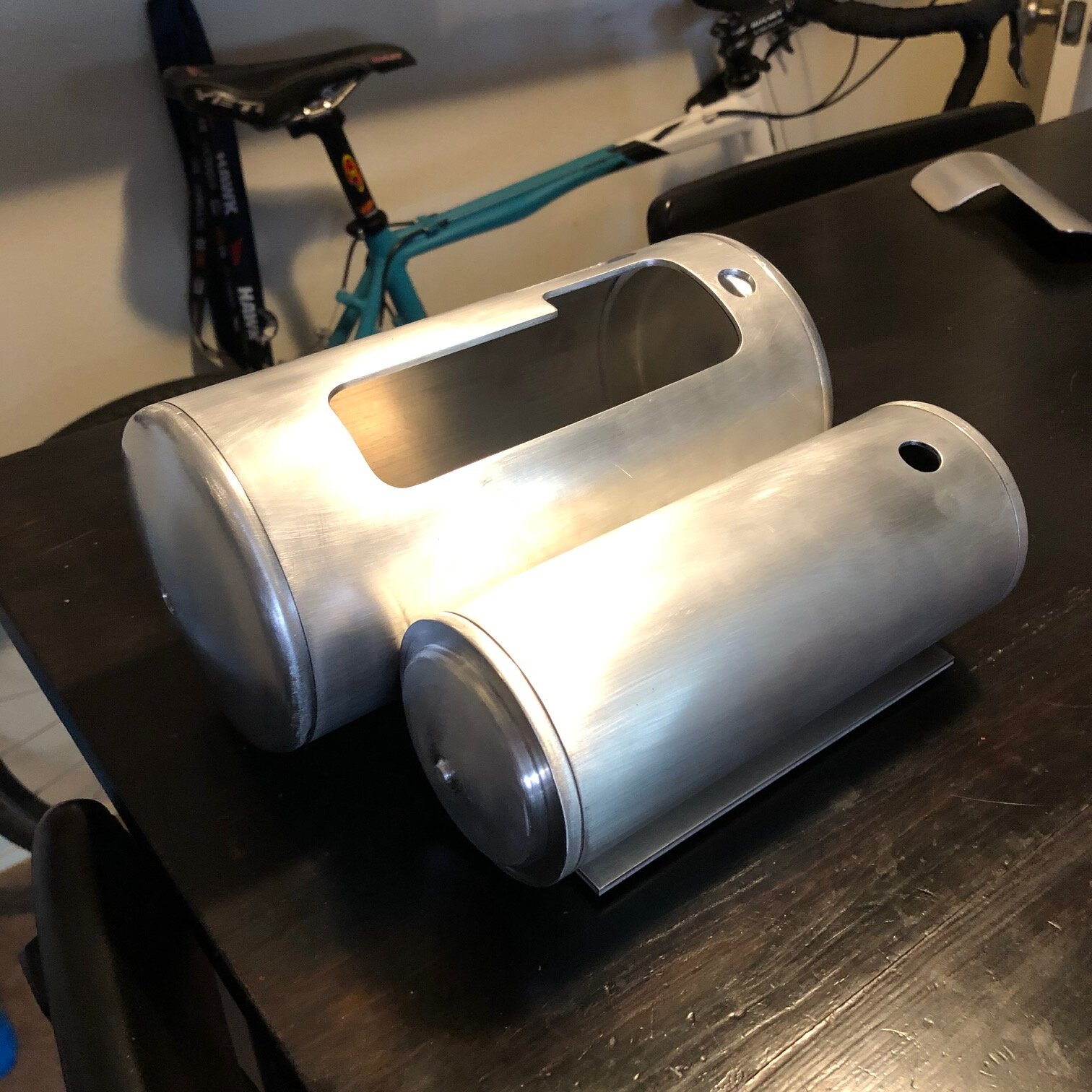 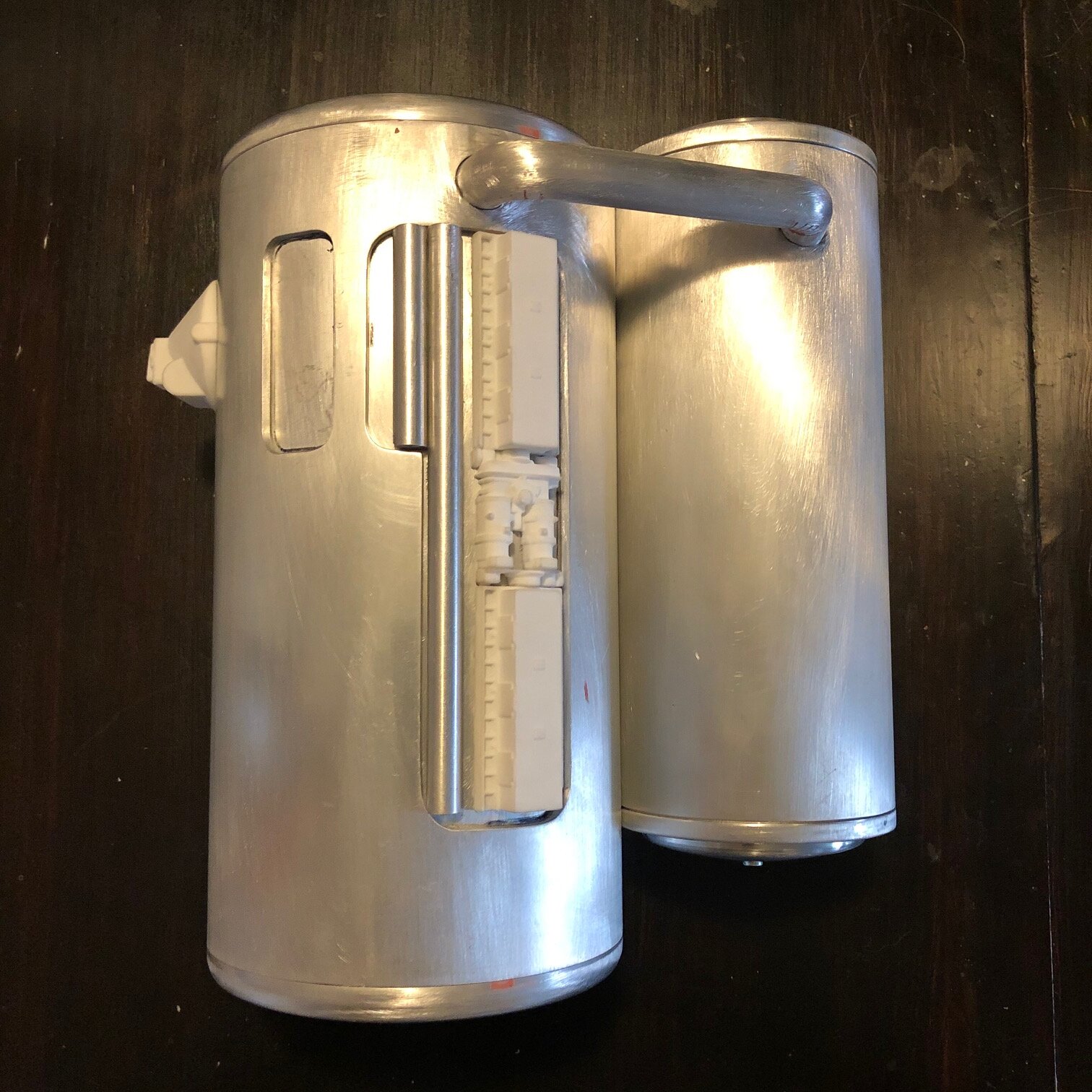 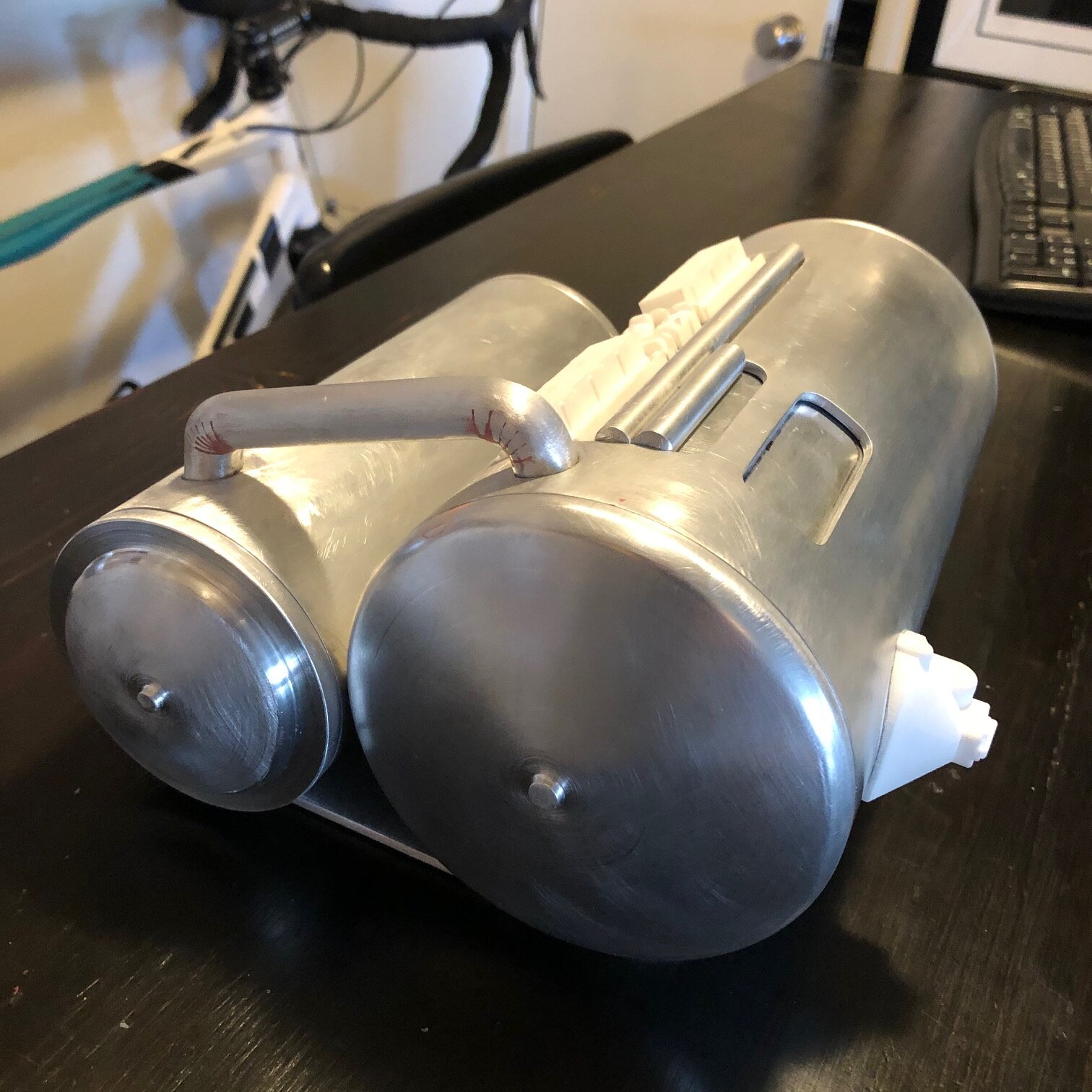 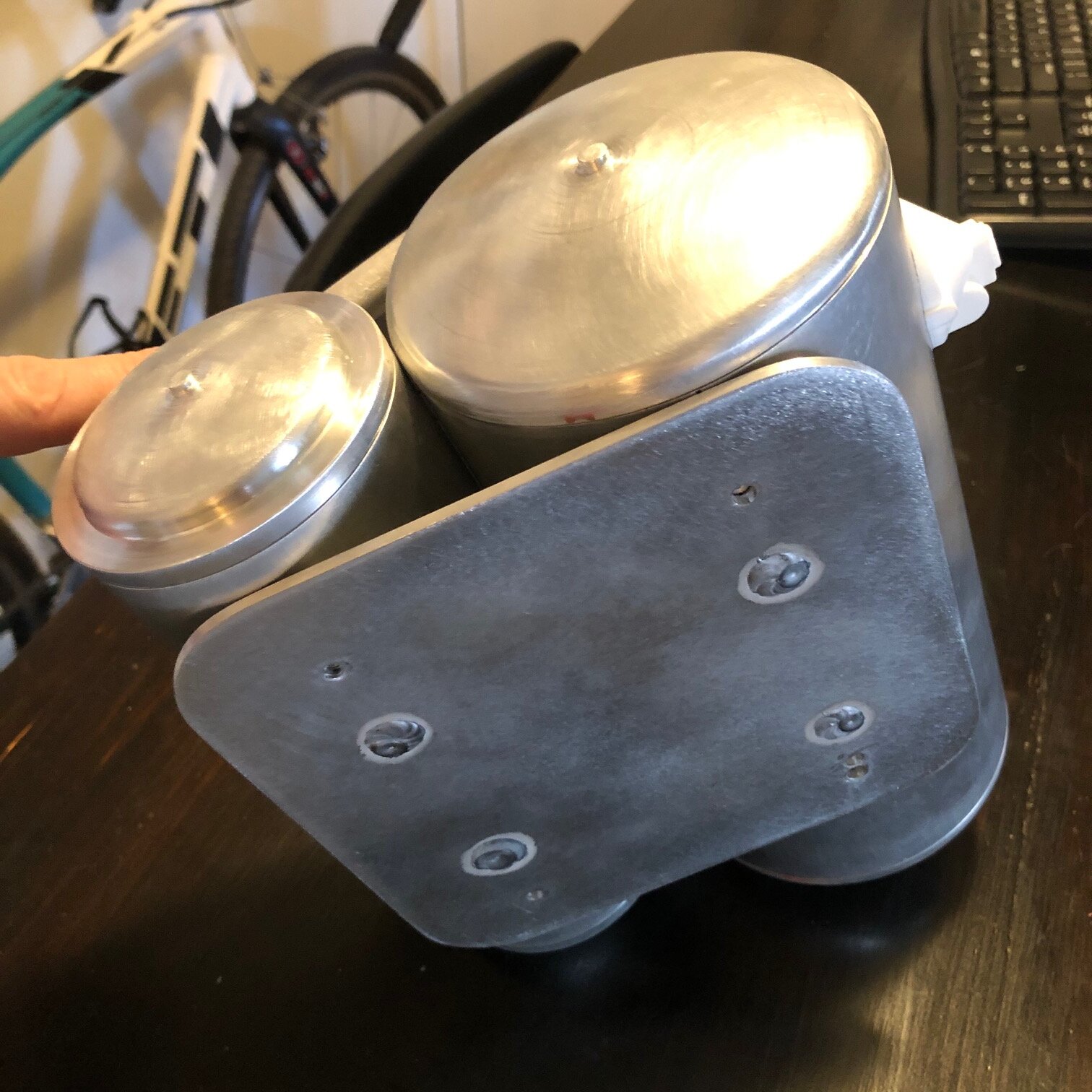 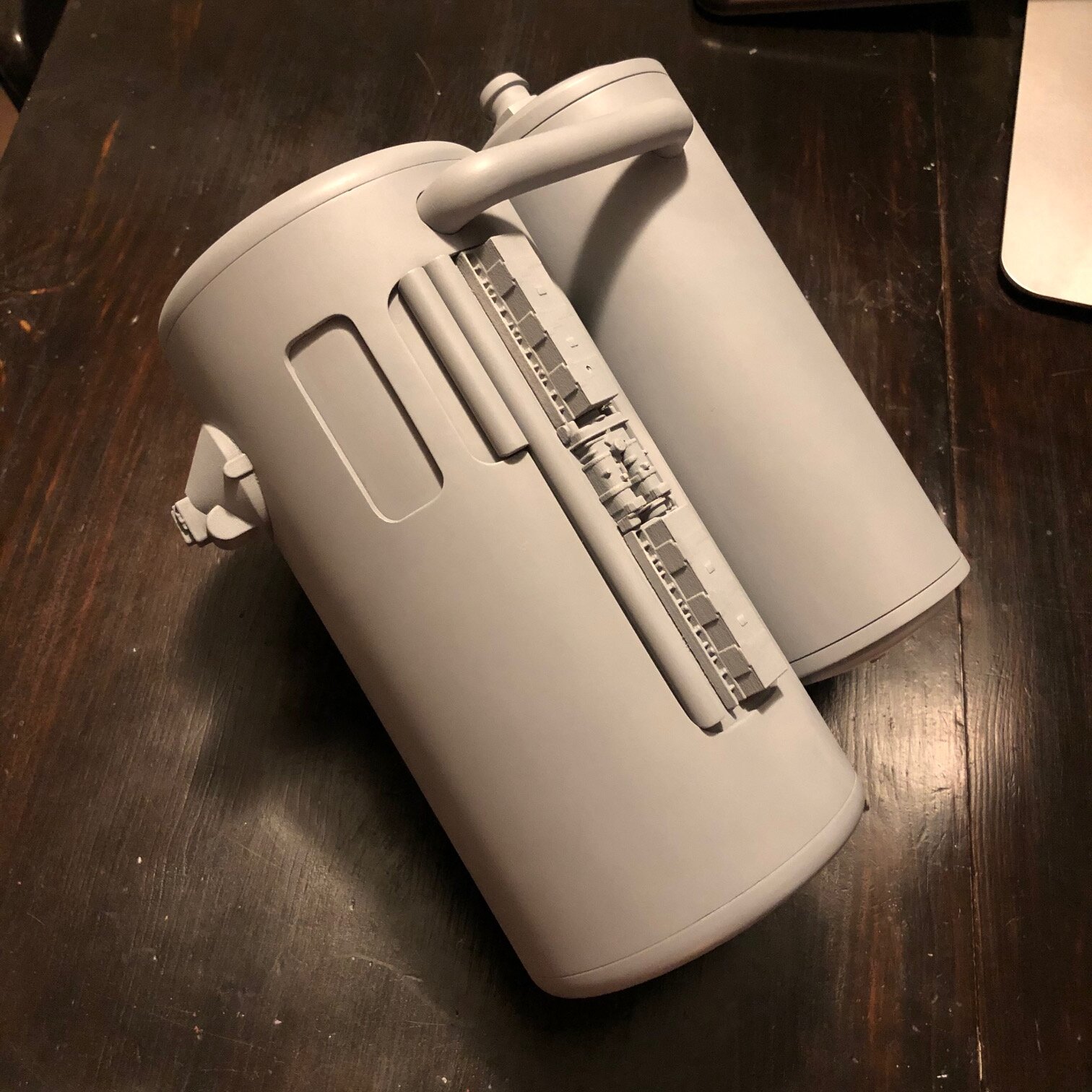 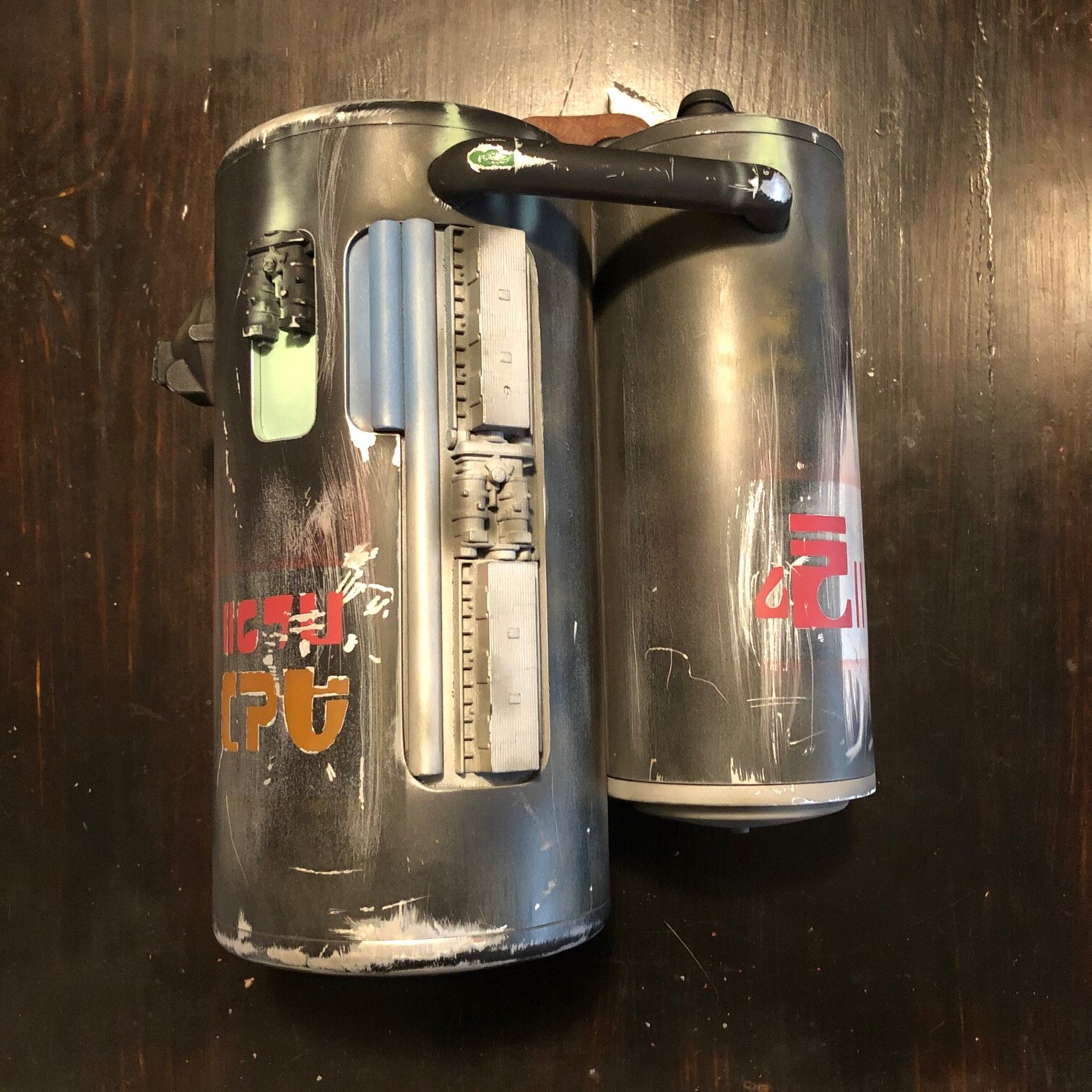 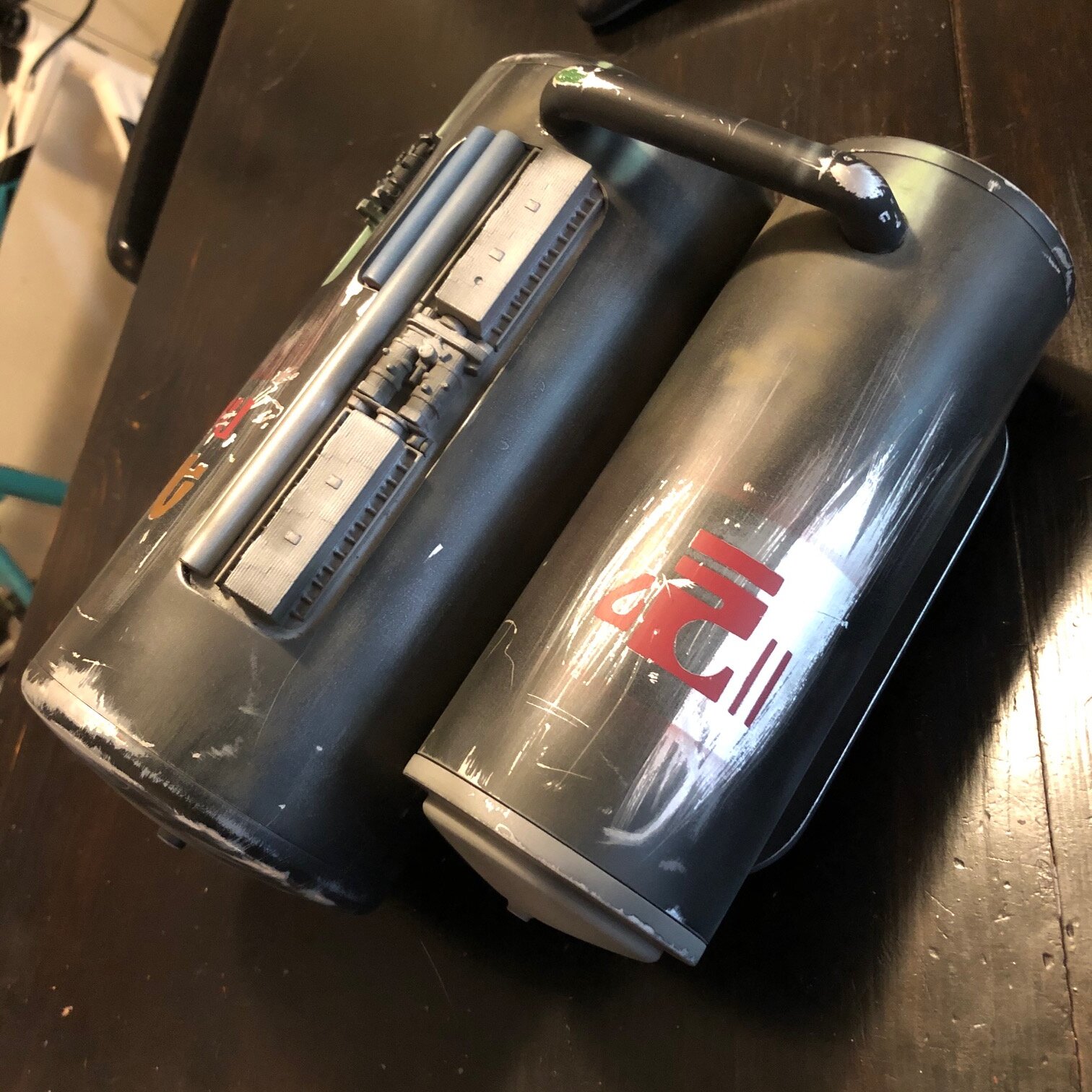 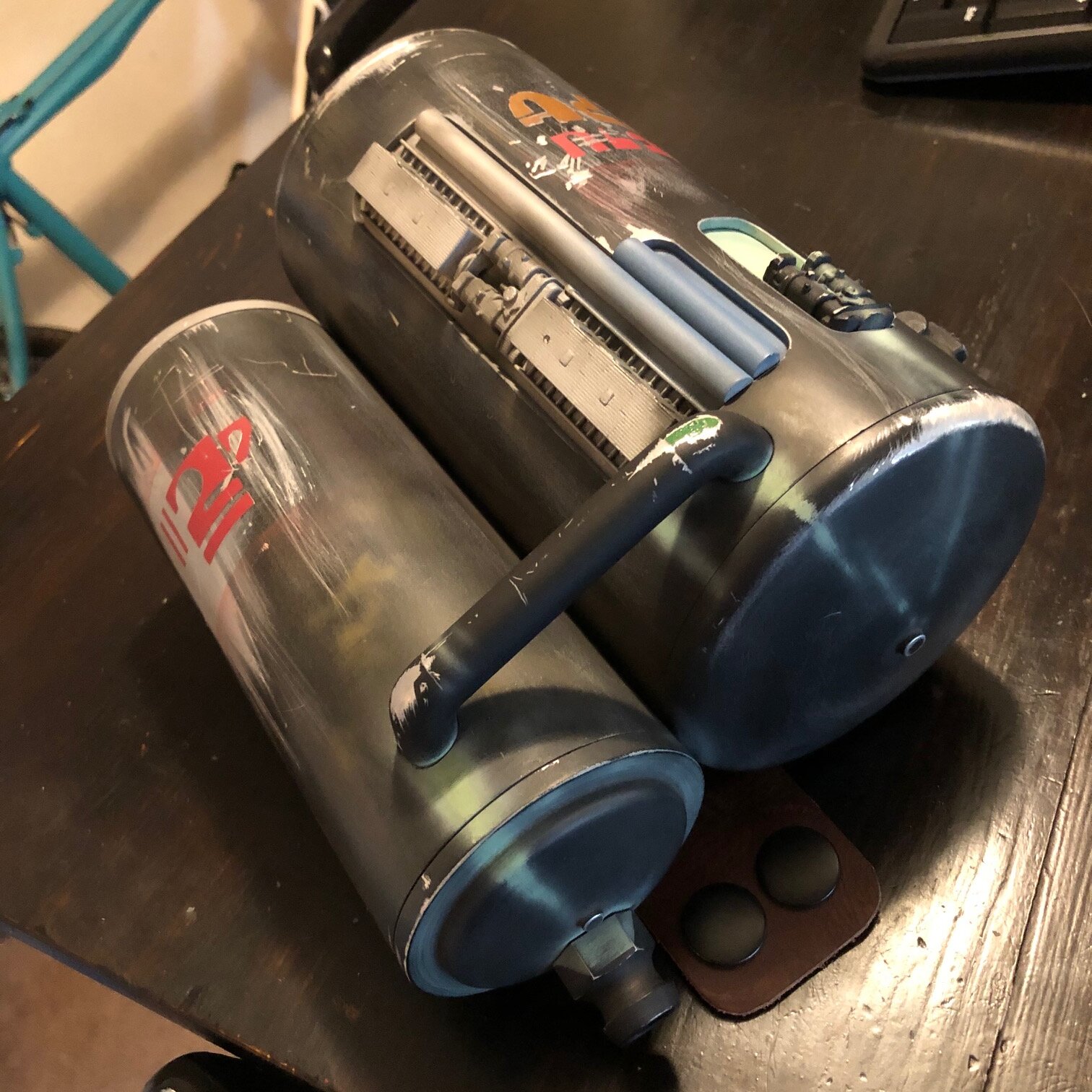 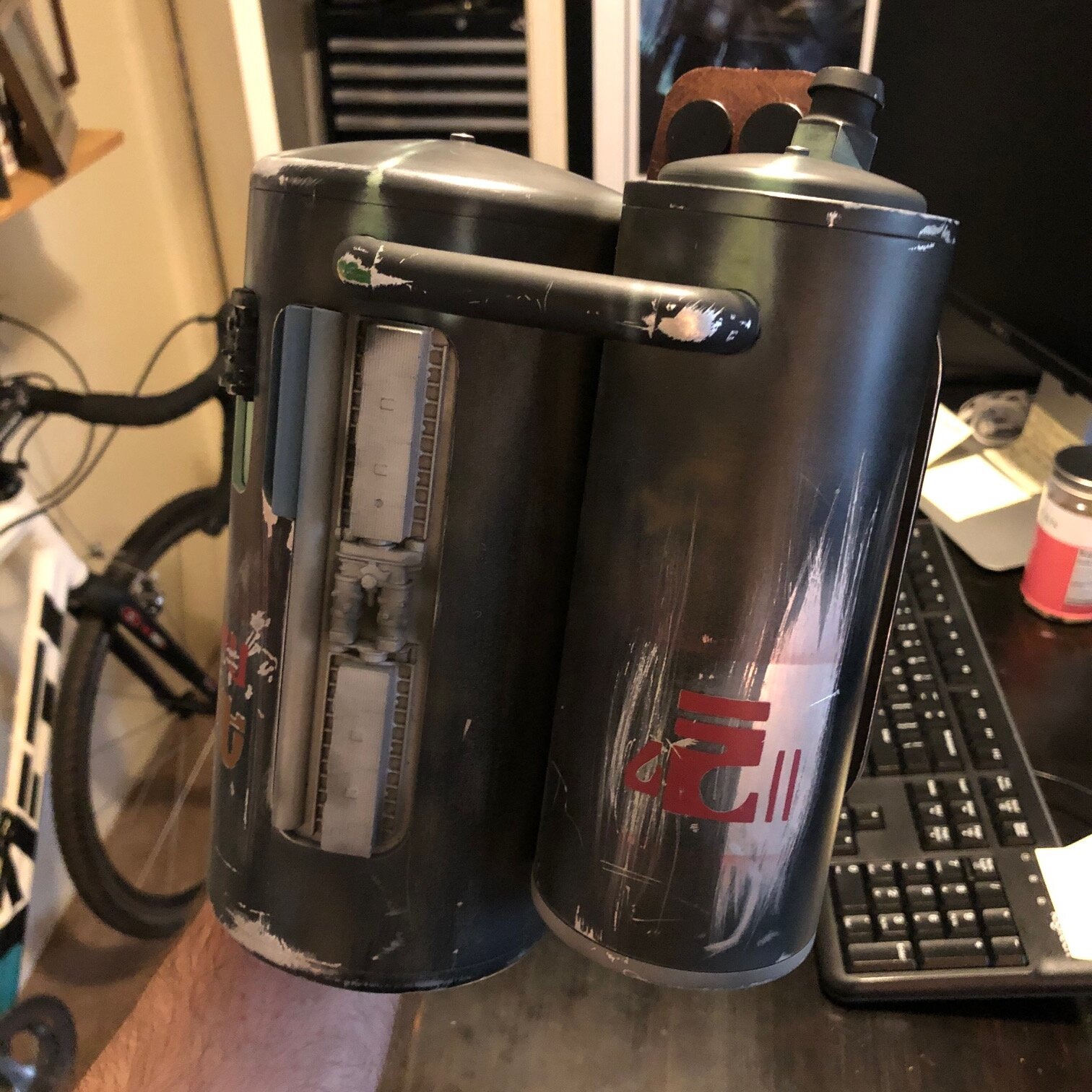 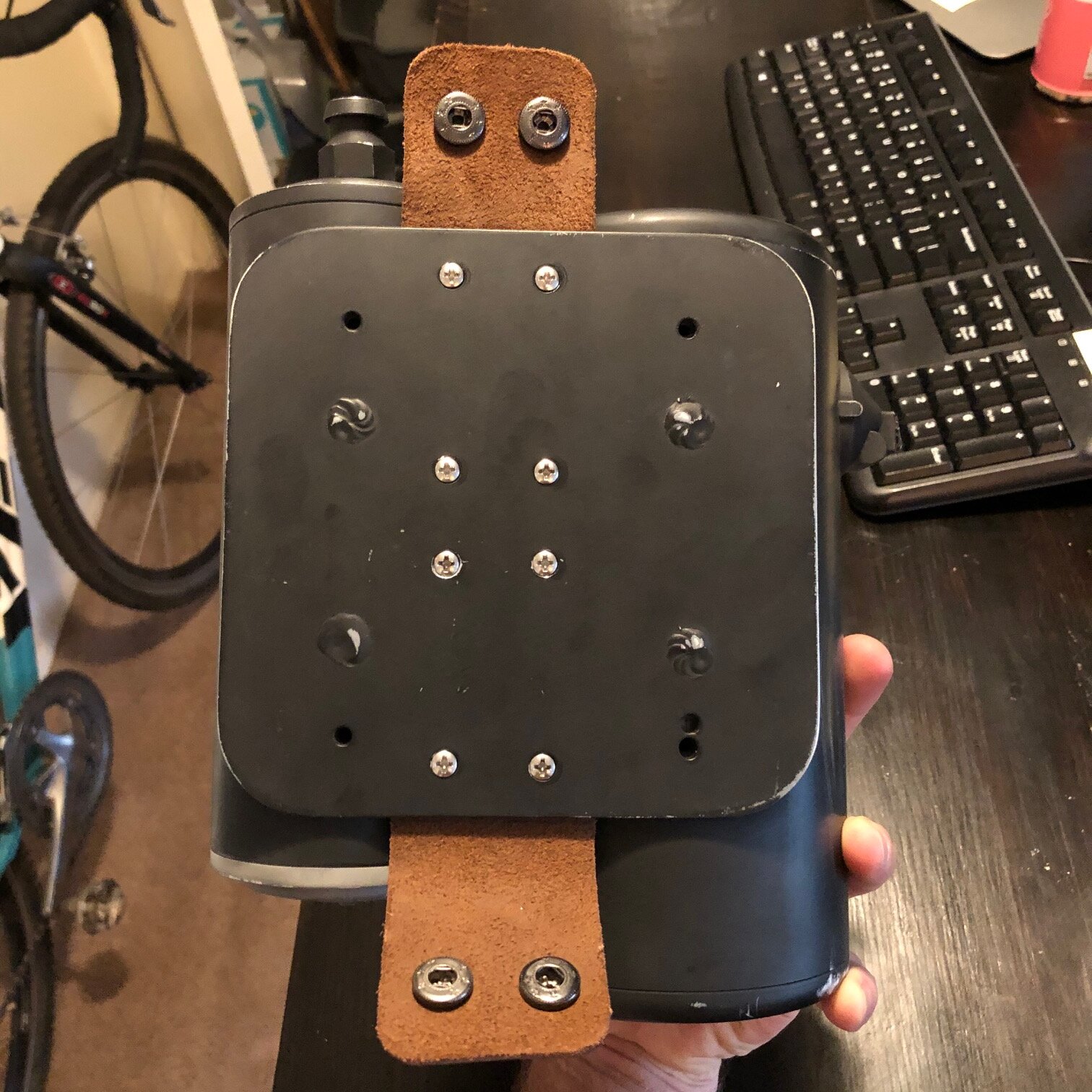 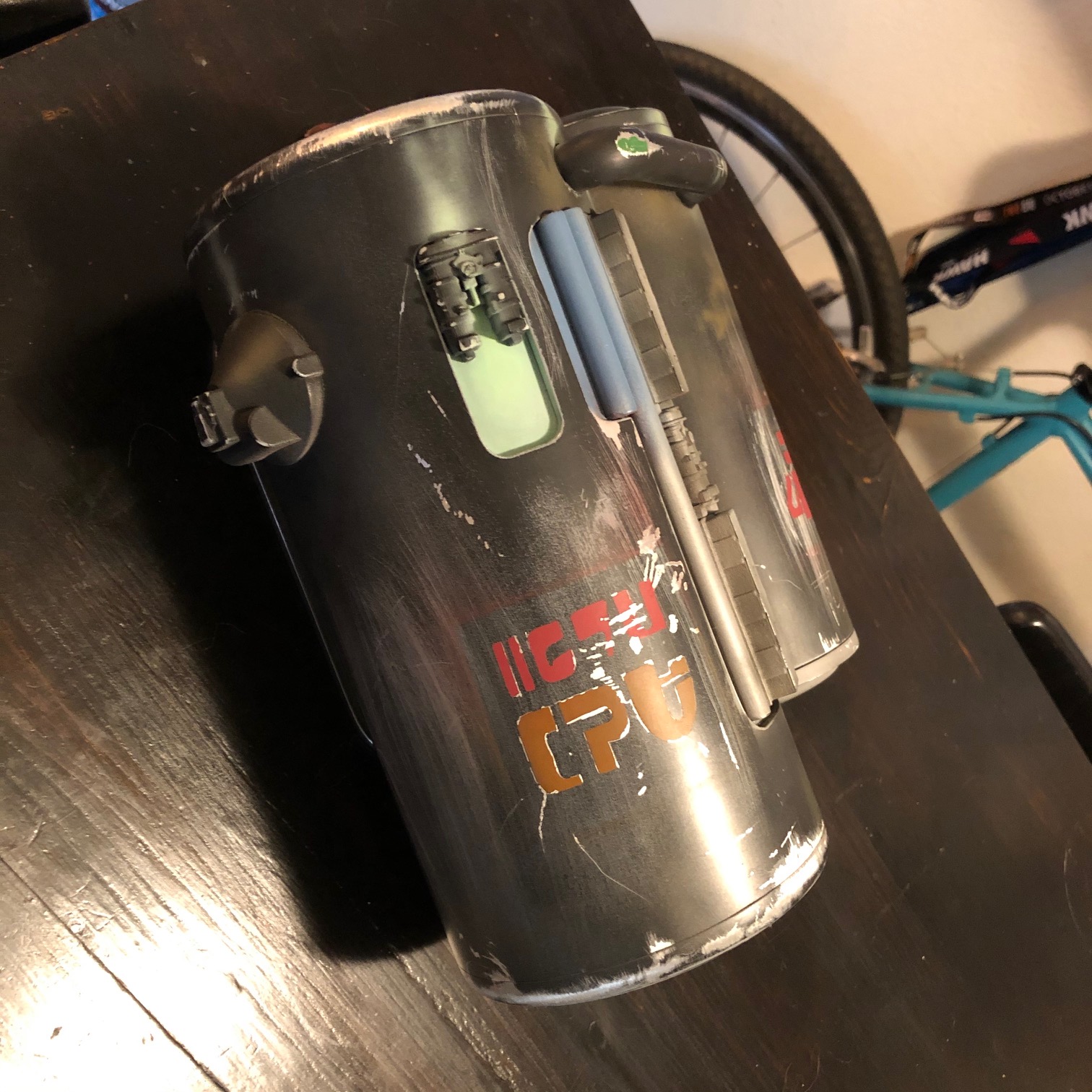 I just realized I never posted pictures of the bandolier. I just finished painting and attaching the second large canister for it and so now it's time to post pictures of the complete unit. For painting the greeblies, I used a base silver and misted over them with a mix of matte black and gray. I weathered the actual webbing by misting the same matte black color with an airbrush. The canisters are all painted with a mix of Humbrol Matte Black 33 and Gloss 21 enamel paint and then weathered with sandpaper and a straight pick. All the canister's and greeblies are attached with 6-32 stainless screws so I don't have to worry about them coming unglued and falling off. I drilled and tapped into the resin of the greeblies and it's really secure. The chucked the aluminum ammunition greeblies in a cordless drill and ran them against some coarse sandpaper to get the beveled chamfer. The snap is a 20mm one I found on eBay that's been painted black. All I have to do now is trim the excess webbing once everything is done and fitted. 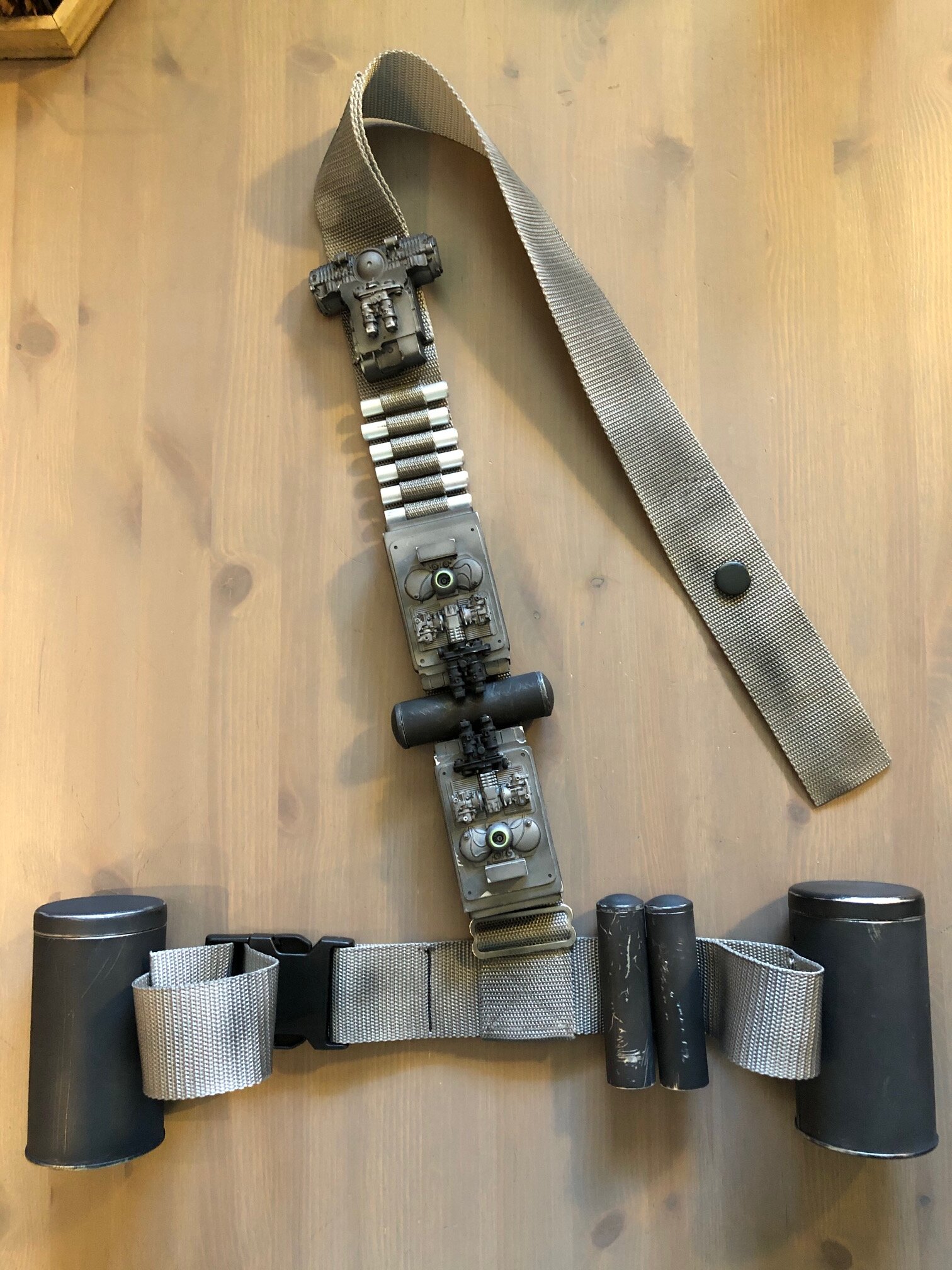 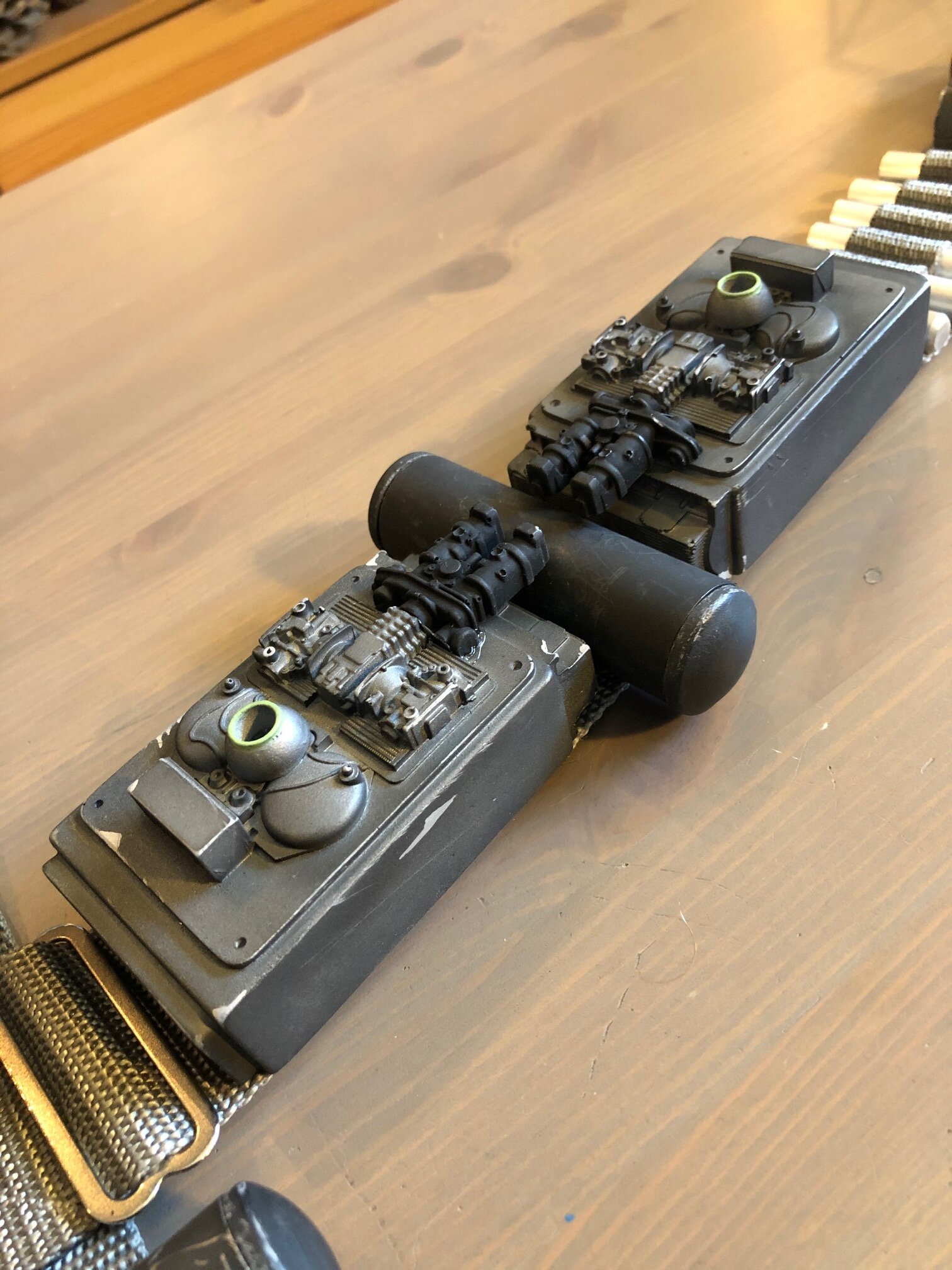 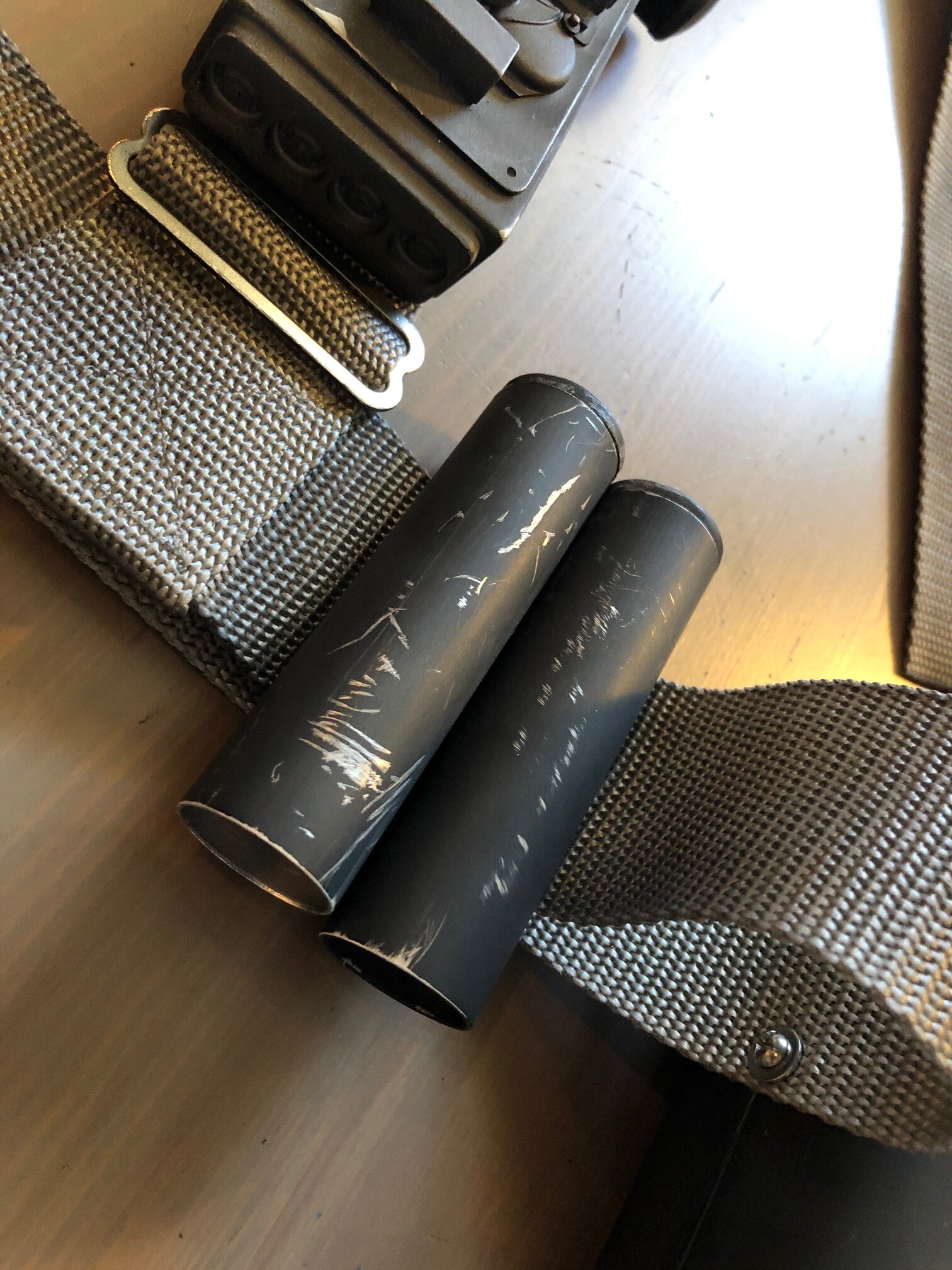 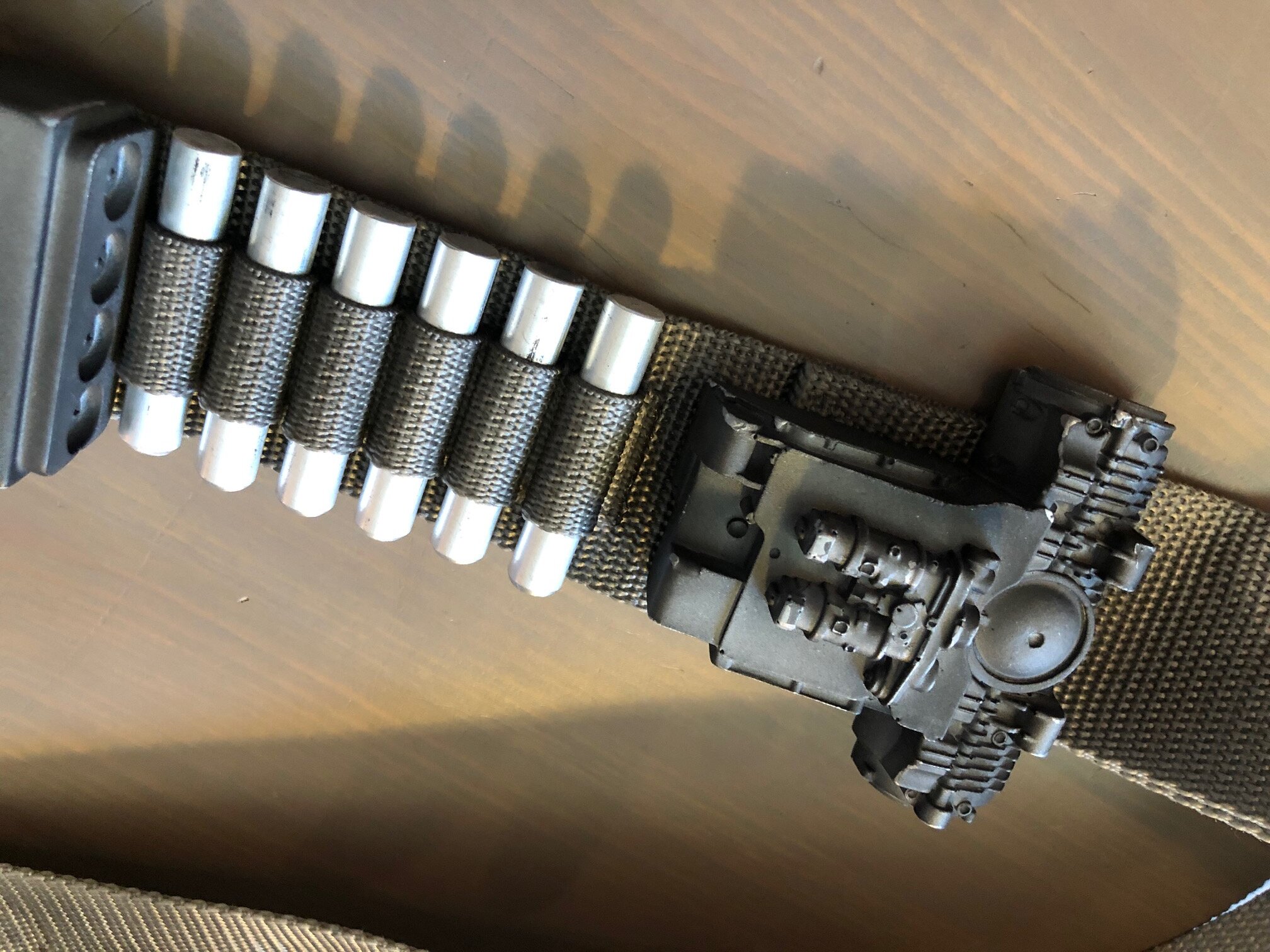 Thanks! I've got plenty of time to work on it so I'm just doing a little extra on each step to make sure it comes out nice.

Amazing job! There's nothing like an accurate self build