Wanted to get these posted up before I forget again and another couple months go by, haha. This is gonna be the first of my 'Gauntlet's Never Get Enough Attention' series of posts, lol. These are some Hyper-Accurizing templates, or guides if you will, that I have been working on to go along with the work done on the new screen-accurate Elstree Precision Boba Fett Laser's. 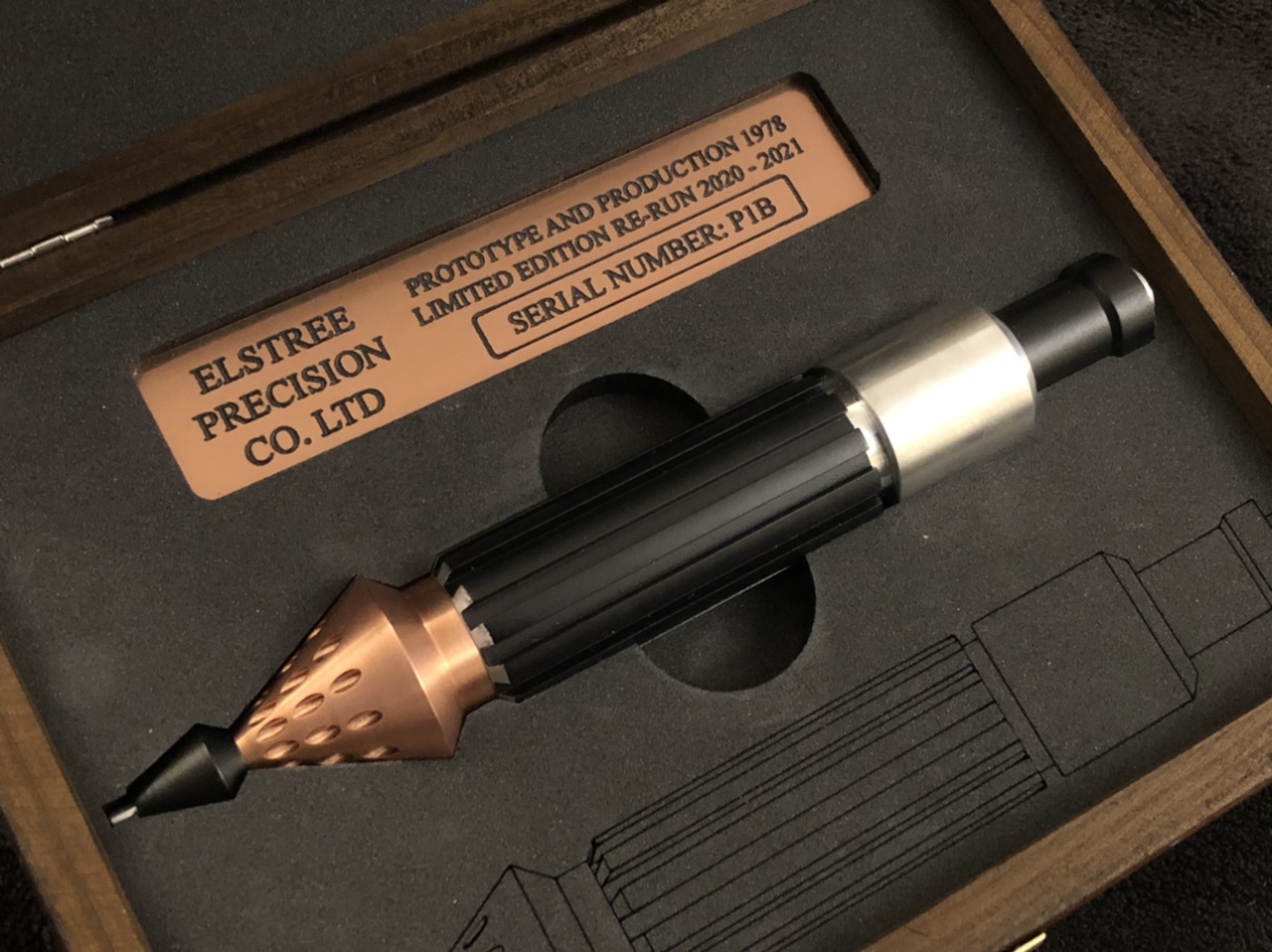 Because the Elstree lasers copy the same attachment methods as the original lasers did back in 1978, we are able to easily 'tune-in' the timing of the holes on our lasers to better match specific costume lasers as they were seen on screen.
Each of the original Fett lasers is slightly different from one another in how their holes line up in relation to the splines/grooves on the lasers body. It's simply a artifact left over from how they were machined that determines how the holes line up with the splines, and so each one varies slightly depending

To tune-in your screen accurate Elstree laser to match whichever laser you wish to replicate is quite simple however, if you would like to. You might not even need to depending on how yours is, but in my professional opinion I would STRONGLY advise against attempting to overtighten the rocket heads to achieve this for risk of deforming, or worse, stripping the treads on your beautiful new expensive lasers.

Tools Needed:
A nice FLAT granite countertop or glass table. Ideally one thats qualified but anything works really, so long as its FLAT and about 8x8 or bigger
400 & 600 grit wet/dry Sandpaper
3m Double sided masking tape (Optional and totally not needed unless you're having trouble with the paper slipping)
A steady hand and patience hahaha

What To Do:
1.) Setup yourself with whatever flat surface you've found yourself ensuring its nice and smooth, and place the sandpaper onto the surface. Start with the 600 to be safe, you can always swap to the 400 if you find you need more
2.) Disassemble your Elstree laser Copper head from the body, and place the back face with the screw hole that mates with the Aluminum body on the sand paper. 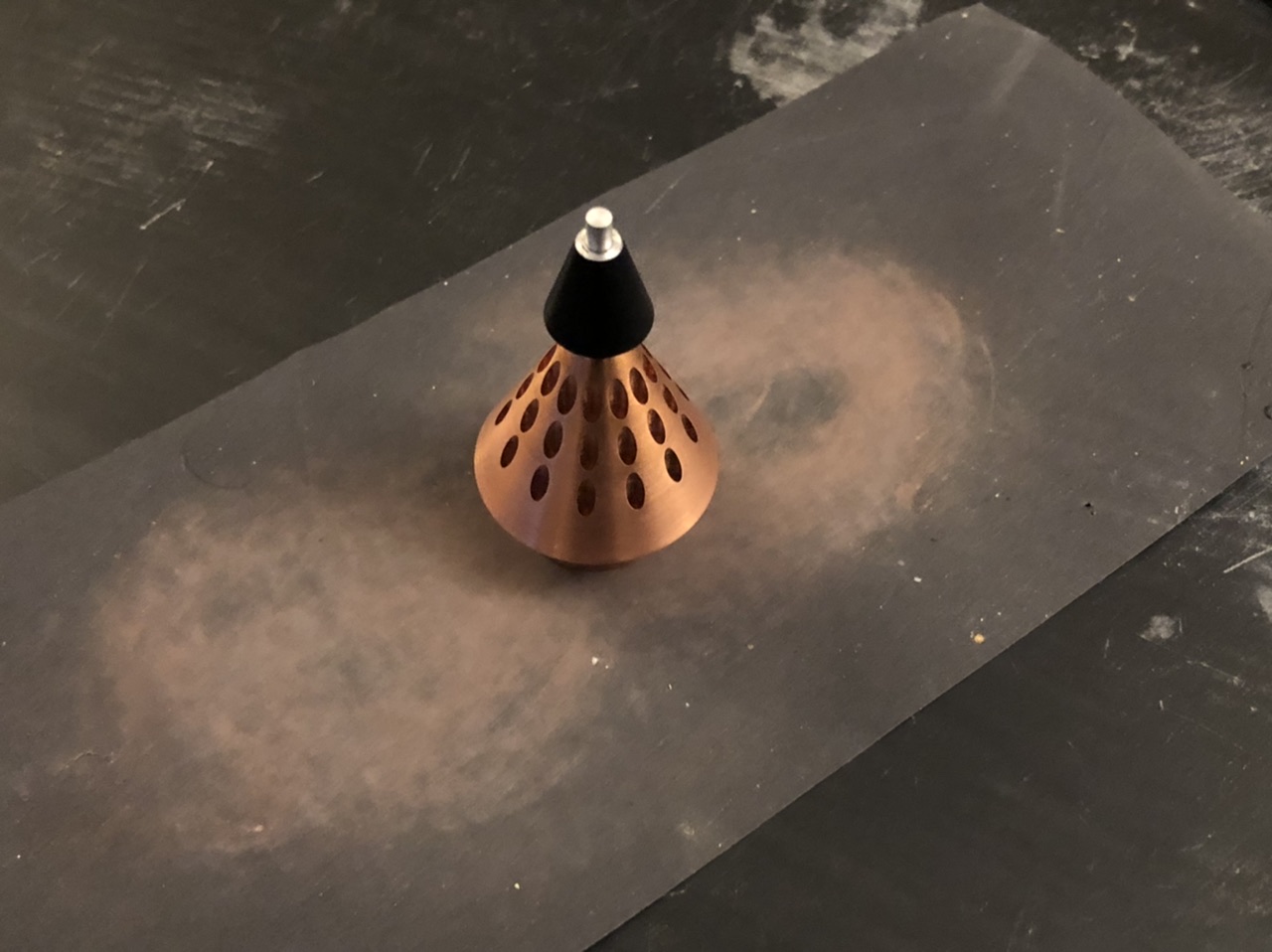 3.) Now, what we're going to do is begin carefully and with just slight downward pressure start slowly moving the Copper rocket head across the sandpaper in a 'Figure "8"' pattern... What we are doing is carefully lapping this mating surface to take off the slightest bit of material while keeping the surface perpendicular and true in order to get the holes to line up like we want. You should only need to do a few passes. A couple minutes work max.
4.) Now clean the surface with a alcohol wipe and reassemble your Elstree laser and check how it lines up now when bottomed out.
If it needs more, or if you accidently went too far, simply repeat the process above until you're happy with how it lines up. You wont remove enough material to bother anything so long as you're careful and take your time.

Just like Raf says with his armor stuff, these templates are my interpretations of what the Hero lasers look like, but I hope they provide a nice guide for you guys. I did my best to represent the lasers as they originally appeared back in the late 70's/early 80's, especially with ESB and ROTJ, and tried to remain fairly conservative on the amount of weathering to account for light overexposure in certain filming shots.
I'll add the Pre Pro 2 laser soon when I find the time and energy to tackle that mess. That ones almost as intricate as ROTJ and I kind of burnt myself out on that one hahaha. I'll also edit the guides if better references become available for them 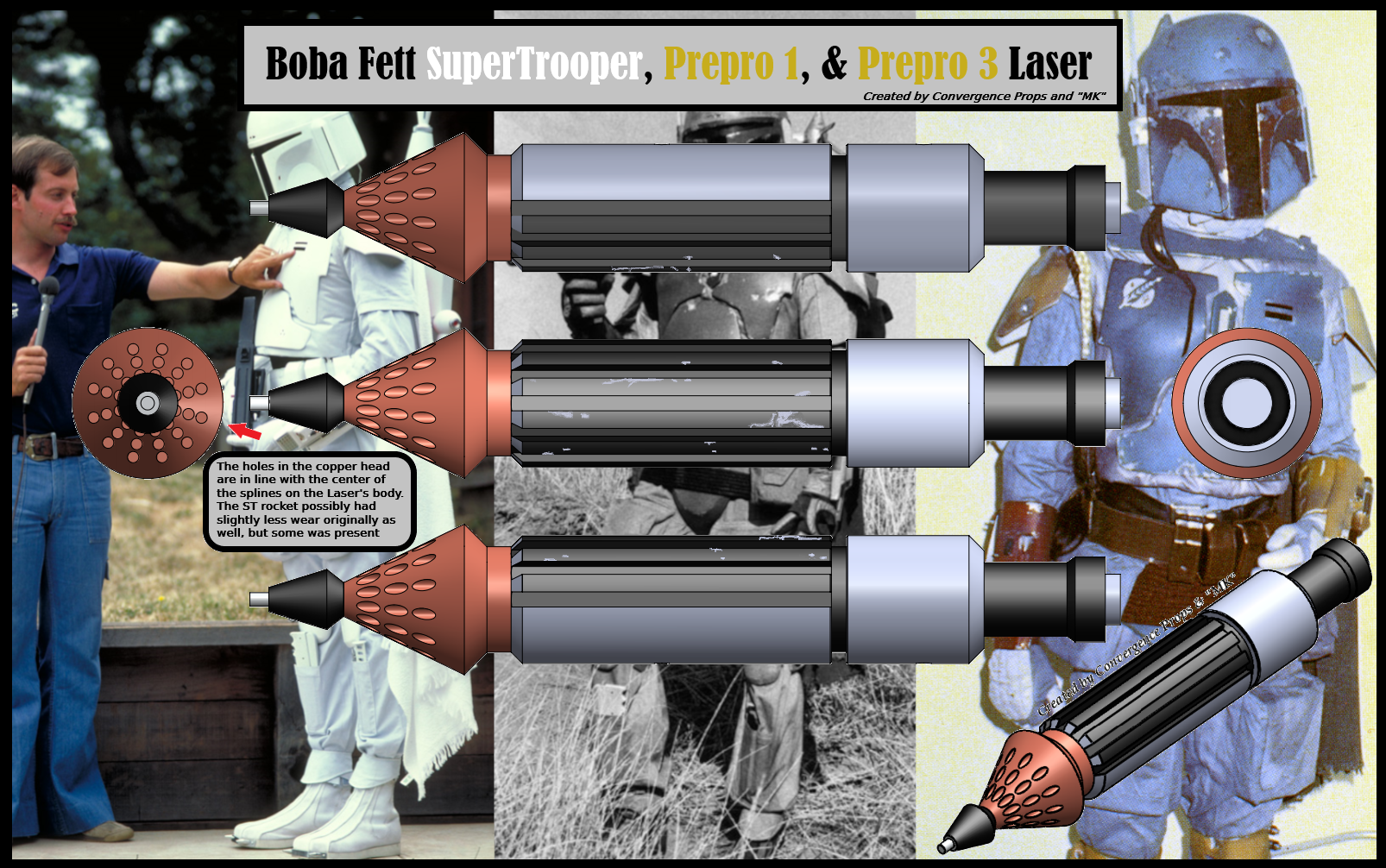 PrePro 2 Laser (WIP)
Holes in copper head are aligned with the body very similar to how ESB's is. 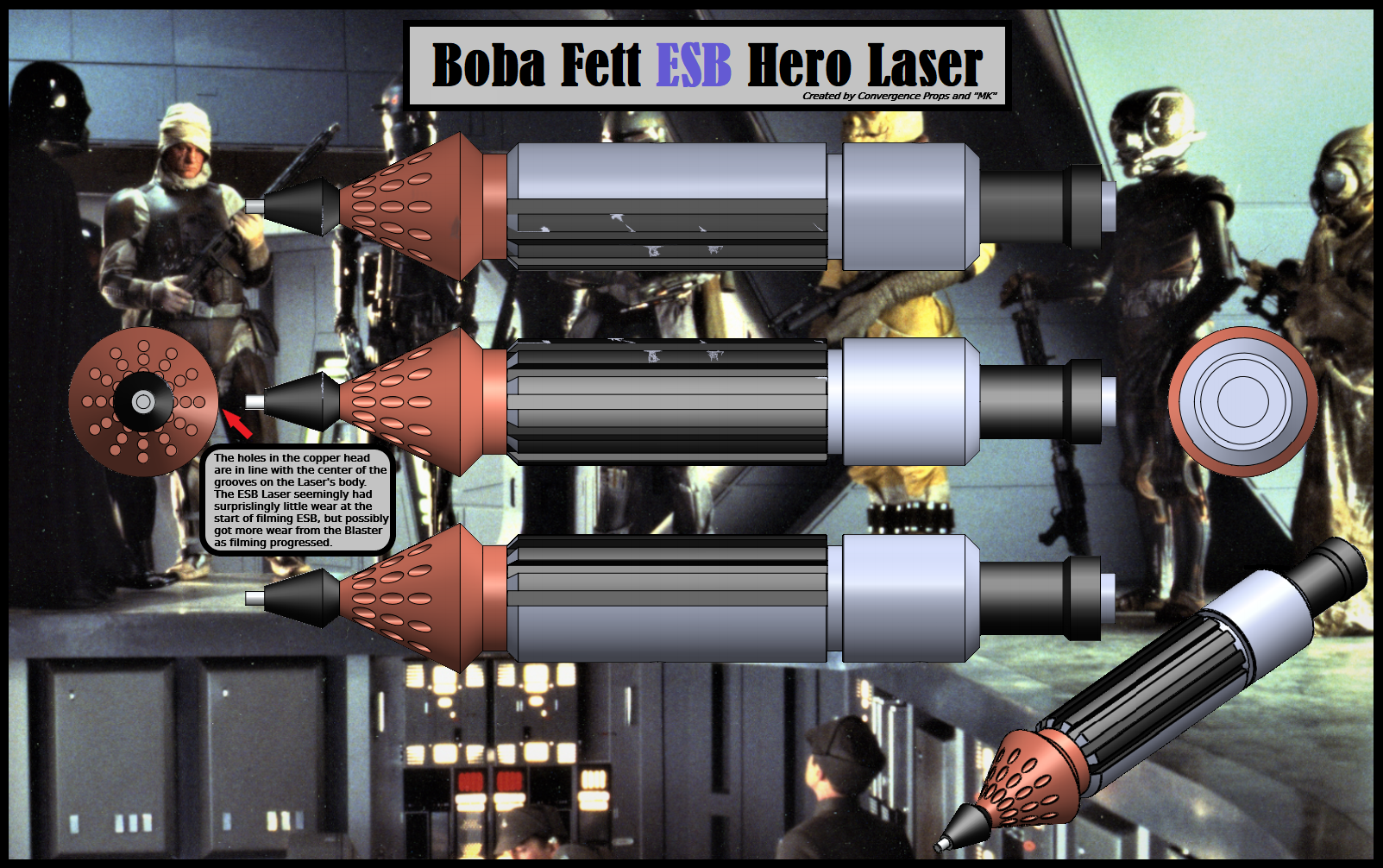 Return of the Jedi Laser (Last updated: 4/12/2021 - *added missing weathering to one of center views side spline) 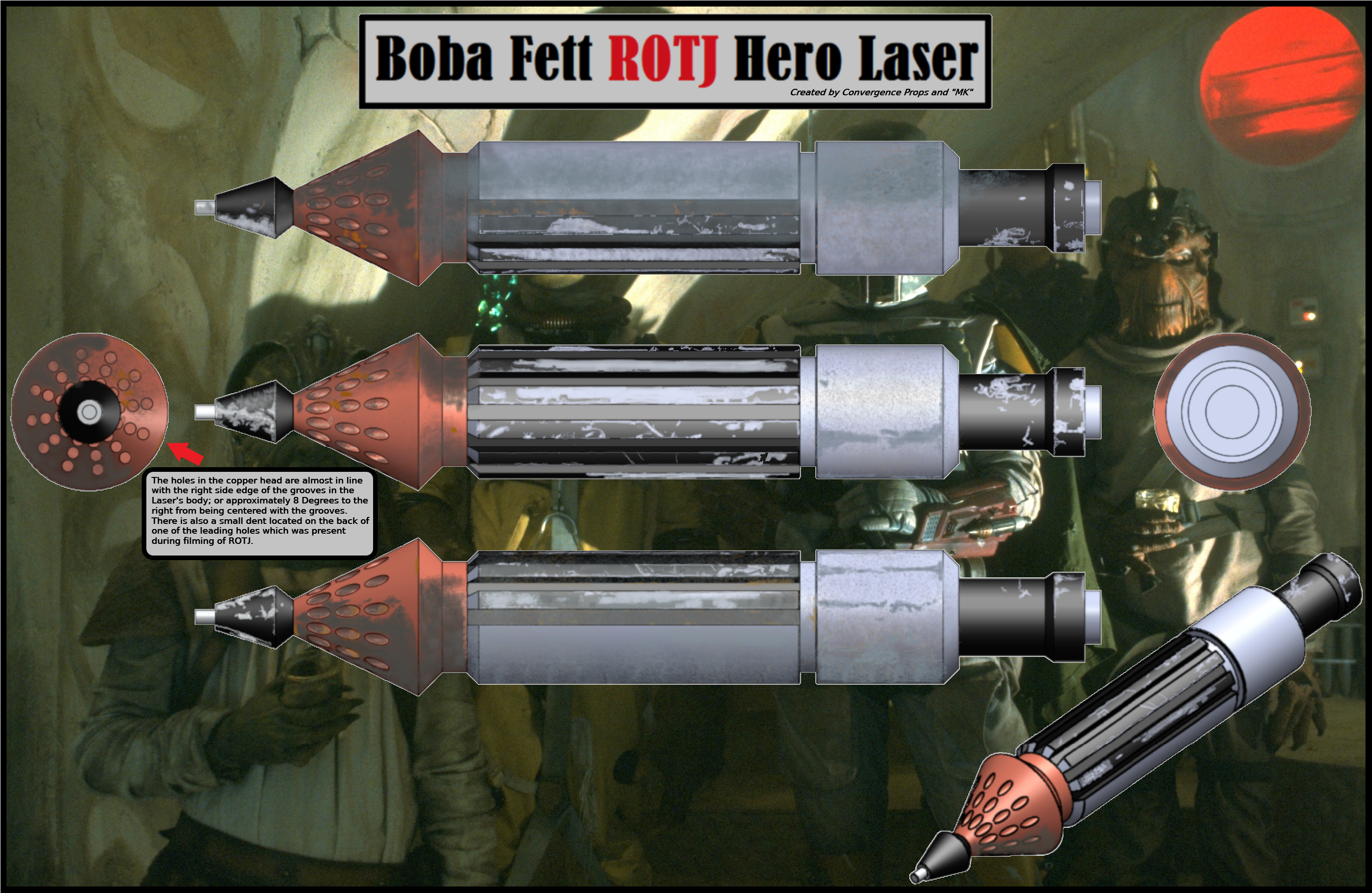 I just checked out my elstree laser and it's already correctly aligned for ESB. Huh. Just a happy accident I guess. But good to know. Great drawings. Well done.

Great research and templates of the gauntlet lasers! The Pre-Pro #2 laser has almost the same position as the ROTJ one.

TDH PREMIUM MEMBER
Yeah thank you for offering this . I dialed mine in so now we can all look legit. Thanks brother !!

RafalFett said:
Great research and templates of the gauntlet lasers! The Pre-Pro #2 laser has almost the same position as the ROTJ one.
Click to expand...

Thanks guys, glad they’re of help!
Believe it or not, the research that I and others have done on the PP2 Laser points to the Copper head on it being aligned centered with the grooves in the aluminum body, much like how the ESB's Laser is.
I actually do have the naked core template for PP2 already done up, I just haven't done any of the weathering work to that diagram just yet because its pretty intricate and I ran outa gas loll. Another member was kind enough to shoot me some better period references to use for that one though so it'll be much easier to do PP2's 1978/1979 appearance now that I have a little more than just the few crummy references I had to rely on
Last edited: Apr 5, 2021