i know i should really stupid but what kinda of alumunum are you using and how did you form it?
Last edited by a moderator: Jul 24, 2017
M

Braks is the master when it comes to documenting the details with blood, sweat, and tears -- and PICTURES. My hat is off to the maker; it almost makes me wish the JB project hadn't fallen through. I must say however that we cannot ever underestimate how much work it takes to get the details exactly right; and we can never express our appreciation enough to those who work so hard to research and help out the entire Fettbuilding community. If we all work as hard as Braks, and if all suppliers are as eager as the metal maker to change and perfect their craft -- well, it just gives me hope. This journey we are on requires patience and helping each other out. I've been away for a while, but I also want to publicly praise Tylerdurden for always being willing to help others by answering their questions, too.

I wanna thank the mod, too for all your hard work. You can delete this post whenever you want, since it adds nothing of real value, only my appreciation for all the others in this community.

Never cease to dig through your Fett pictures, learn as much as you can, and use your knowledge strive for what will make you happy, and to help others.
Last edited by a moderator: Jul 24, 2017
M

I see your discussing a "certain armor builder's" efforts, lol.

Glad to see those pix BB but really do have to say that I thought my codpiece is one of my better formed pieces...its definately the most time consuming and achieving the form is tricky because there are angles which dont "want" to line up right. My only critique of my codpiece is that the curve should be a bit more pointed at the bottom. This too is tough to achieve because I use a series of metal stakes, shaped like thick japanese fans with a bevel at the top, and have to angle the piece as I hammer it....sanding down all the hammer marks is equally tricky because if I get to close to the edge it can wear down, causing the curve to widen or narrow too much. The only other detail is that you guys say that the RENAL plate goes over the cod piece but I swear Ive seen shots the other way....is it possible that these two plates could be assembled/connected either or both ways???

Oh yeah two other things...the codpiece on the MOM mannequin has a weird bent-in look on the rightside if looking at him. I decided not to include this as it appears to have been a detail that was not included on the originals...though I could be wrong. I presume this is due to warping of the plate...which I have already noticed on the Jango suit!!--Ive got a shot of the neck plate all warped out of shape.

Regarding symmetry of the two chest plates and Ab...well guys, to be honest..if you held them up together you might be turned off at how assymetrical they really are..almost .5" in some plates!!!!! I do have the original movie patterns and can use them for the hardcores but I dont recommend it on the grounds that 99.9% of people seeing it will think you look lobsided and it kinda bothers me personally that some super spaceage culture would make armor that was so damn assymetrical. Somebody (not BB in this case) I really respect and who generally has a very good eye who prefers everything to have the movie flaws. He asked me why in the world would I and anyone else want metal armor. "Well," I replied "because A] according to the movies/story its SUPPOSED to be some type of industrially produced (machined) shiny metal armor...B] I sorta suspect that, given more time, the costume guys ~would~ have made a perfectly symmetrical suit...C] each movie version has a slightly different trim job so achieving a perfect replica means youd have to make at least several or more separate costumes!!...and D] simply put, metal impresses people a helluva lot more than plastic or fiberglass...c'mon this stuff borders on 'Western-iconica' so when representing the most popular trilogy, by all means, where your best threads!

Braks.......PLEASE post a critique of the cod piece and Ill try to make some corrections.

Here is a comparison Pic of darthgoat's armor compared to mine. As you can see, quite a few changes were made!

NOTE: I covered darthgoat's chest slots for this comparison. 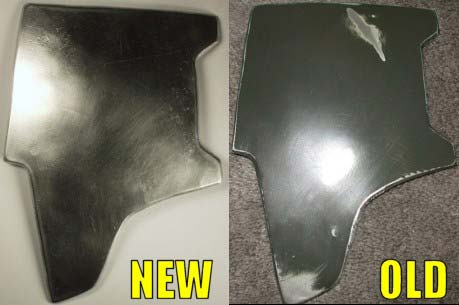 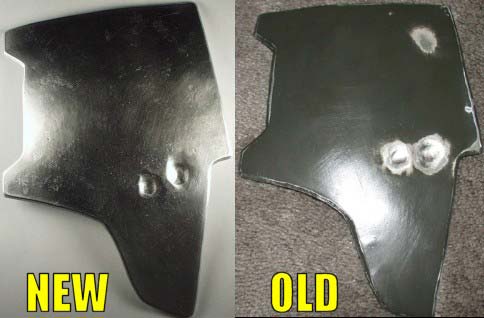 Why do yours look so different BB? did you modify yours?
Last edited by a moderator: Jul 24, 2017
M

I was the very last one to order a set of metal armor. I saw the prototype set at Dragon Con last year and took pics of it then compared those pics to the real armor. I then sent a list of correction to the armor builder. He made those corrections and that is what most people received. As the first people on the list recived their armor I asked for pics and again did comparison shots to the real thing and sent ANOTHER list to the armor builder and asked for MORE mods to be done to my armor. Since my armor hadn't been formed yet (because I was the last person to sign up) the armor builder agreed to make those changes. I also sent the armor builder every pic I had of the armor and between my suggestions and the numerous pictures he was able to create a VERY nice chest set that is quite a bit different from the original sets. Like I said, the shoulder bells (which I will post pics of at some point in the future) still need a LOT of work as well as the codpiece but I think the armor builder has come very close to nailing the cheat and ab plate. One thing you may notice is that he mirrored the two sides of the ab plate as well as the chest armor to make the opposite piece. This means that the pieces match up to each other but not exactly to the real thing as the real pieces are quite asymetrical as are almost all Star Wars props.
Last edited by a moderator: Jul 24, 2017
M

Aha, wow you were lucky to get a set of that. I didn't even know that metal armor was being offered. That is definitely
one nice set of armor... i see only a few minor discrepancies between that and the real deal. Be careful when cutting those slots!
Last edited by a moderator: Jul 24, 2017
M

Are they still making Aluminum Armor?
Last edited by a moderator: Jul 24, 2017
M

braks i think mine came out of the same batch as yours.

jaster, cutting the slots took a lot of time and patience. many dremel cutting discs died to cut those slots. hehe.

seriously the metal stuff is about as accurate as you can get.
Last edited by a moderator: Jul 24, 2017
M

Here are pics of MY personal set of ALUMINUM armor compared to the MotM armor. All I can say is this is VERY NICE STUFF!! I would like to point out that I chose NOT to have the rivets installed and I requested several mods to my set to make them more accurate. This is one of the last sets produced so it is one of the most accurate as the artisian had time to correct several mistakes from earlier versions. I think the chest and belly plate are pretty darn accurate but the shoulder bells and codpiece (not pictured) still need a lot of work. I had to do a good bit or sanding, ESPECIALLY to the edges as they were pretty sharp but once I got things sanded a bit they began to look a LOT better. As you can see, I STILL haven't cut out the slot for the chest lights!

I just wanted to take a second to compliment the maker of this metal armor. He has come a REALLY long way! When I saw his metal prototype at DragonCon 2001 I was really upset with the accuracy. I honestly wanted to cancel my order! Instead I contacted the builder and worked with him and you see the result of our collaboration in the pics above. I wanted to post one last comparison shot to show you JUST how far this project has come. Here is a shot of the chest plate that I saw at Dragon Con compared to the chest plate that I received. I think the pic speaks for itsself... 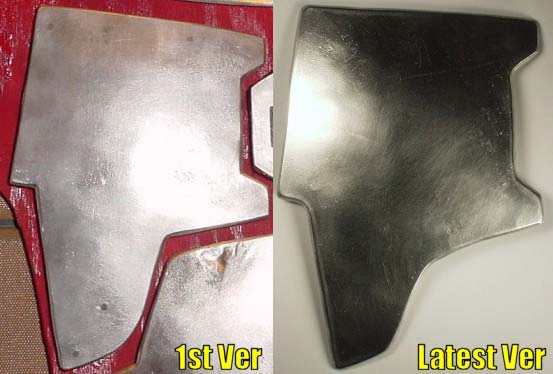 Wow! That is quite an improvement. I had never seen pics of the prototype set.

I just recieved my "aluminum SON armor" in yesterday's mail,and let me tell you that for what I paid it is the single best deal in this galaxy,or any other for that matter!! There is minimal sanding to the surface,and edges to get it ready for a paintjob,and the feel of it is spectacular,......the metal gives a sense of reality that I just wasn't expecting.The work that must have gone into the construction of this ensemble is so far out of my range of skill that I wouldn't even attempt doing it myself.This is one more awesome piece to the seemingly endless puzzle of my ESB Boba Fett,.......and a GREAT BIG THANKS to the maker of this armor.If this armor EVER becomes available again I would highly recommend snatching up a set,be it FATHER,or SON.

I am doing a batch starting in late August. I can throw a few more on the burner if anyone is interested. Please email me at space_breathing@hotmail.com if you want pictures, details etc.

Also..I should be kick starting the foundry I recently bought this week. ALUMINUM: helmets, gauntlets, knees, legs, etc are literally right around the corner. Galactic credits are very reasonable, so please inquire, you might be very surprised.

I'm ahead! I sent in a MO last week already!!

Unless I am mistaken about who crafted these, I have the same set. I do not have a backplate, knees, gauntlets, or jet pack yet though. I am impressed with the craftsmanship, but unsure about various details. I have spoken with the artist a few times on the issues of the shape and size of the shoulder bells for boba, and the neck plate seeming squared off and cut straight across in the ESB Boba footage and pictures. I am still wanting to get my hands on a back plate. I have Cheng boots but still need so many Fett parts to create a costume. The aluminum armor is a really neat start. I cant wait to paint mine. I am dreading the Shackman light cutout of my chest plate. I really dont want to do it myself but I will if I have to. I need to get the lights first.

been outta town for a while...

if you have questions, EMAIL me at

General Who makes the largest ESB back plate?

General Who makes the largest ESB back plate?