here he is, this is my son showing off his almost complete costume for ROTS. Many thanks to the Trash can armor guy and Forced Trekker(who made the custom child sized helmet). Everything was painted and made by me(cept the helmet, I painted it, forced trekker made it), the knees and all armor were cut from a trash can, and the jet pack was made from an OJ container, air freshners, pop cans, and some chip containers, I have kept this project under $100 so far. Cant wait for Wedsday, is anyone else working late hours on their costume or costumes for ROTS?

heres an updated pic of him, the knees are currently being modified and the cape and gloves are next. I'm skipping the wookie scalps and girthbelt and sidearm, as this is a costume for a child and it would be too bulky with the complete screne accurate costume, actually im gonna try to get some braids for the scalps, but the rest im leaving out.

ok here he is all done and ready to go get in line at the theater, the little brat was watching AOTC at 6:30am when I woke up today. I'll post pics from the theater later this weekend.

oh ya we do need to go find some gloves at wal mart real fast. 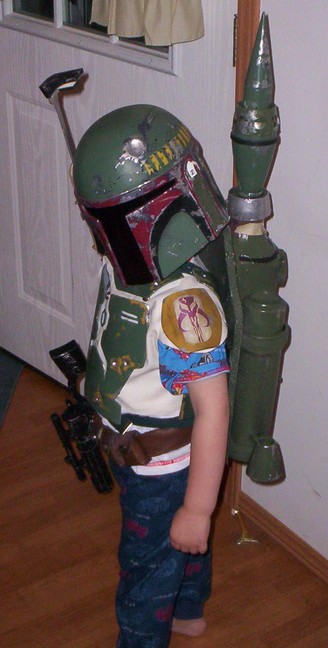 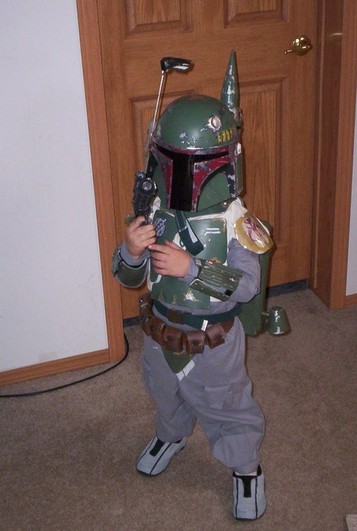 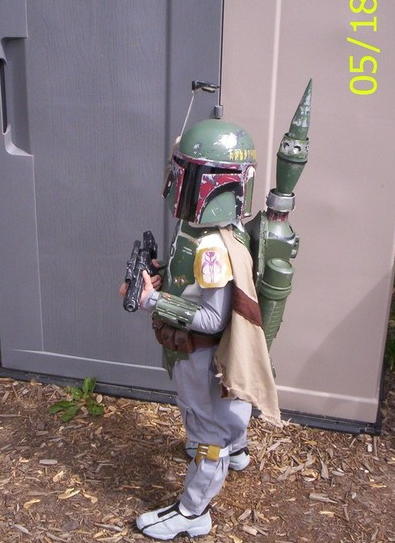 That's just awesome. He's even got the Fett glare down. Can't wait to see him done!

Kid Fetts are the best....he does have the Fett attitude going on big time with that tilt

Either that or the helmet is just slipping down the front of his little head...it happened to my son at CIII all the time .

Delta-9 that looks awesome! the lengths we won't go for our kids, right?


Trooper TK409 said:
That's just awesome. He's even got the Fett glare down. Can't wait to see him done!
Click to expand...

This is the coolest thing I've ever seen. Your son is possibly the most awesome ankle-bitter I've ever seen, '409 is right, hes got the gare down pat. Before you know it, He's going to be a profesional boba actor or something.

Cool, his 'jammies" rock to,lol. Now just if I could get my child suit done.....which helmet did you guys use?
D

talk to forced trekker for the helmet.

ya I let him run around just to see how it all fits, his grandma is sewing the jumpsuit right now, should be completely done about 24 hours before the midnight showing. We are gonna see if the theater will give us some free passes for trooping all night, of course we are gonna see it about 3 times this weekend so free tickets will help out alot.

Are you going in your jump suit? to the midnight showing?

Need to make him some gloves and you got it!
But thats me

TDH PREMIUM MEMBER
Awesome job on that costume:cheers
I don't have a son. . .yet, but I think I'll make my little nephew a set of armor when he's a little older. Very impressive .

Dude...that is just awesome! He looks too cool!

That's the first helmet of mine I've seen finished, and you did a super job on it!

He's gonna get all the attention wherever you go.
D

omg, the theater I went to, Showplace 16 had every theater open and the line was probally 1000 yards long. Little Boba(the name he was dubbed last night) was a hit. Aside from one guy in a half boba costume and one deluxed Vader costume my son was the only one is costume. He had the whole crowded cheering and took hundreds of pics and of course he got in the paper. The best part is that when the police barracade saw us walking up towards the front of the line they justed opened up and let us walk right in. We didnt even have a ticket for him, but the Theater manager told us to just go right in a pick our seats. Jonathan already woke me up and asked when he can put his costume back on. It was a great time, Im so happy I decided to stay at our local Theater. My only complaint is that the main fights needed better endings to them, the final blows that end the fight all seemed a little boring, cept maybe Palpatine/Mace. Anyways, now I cant wait to see the dvd and all the extras. I'll update this later with some pics from last night.

Sounds like you had an awesome time. I told you would get all the attention!

heres a shot at the portrait studio my cousin works at. I know we forgot the gloves, we left them at home, but they really dont fit his little hands too well anyways. 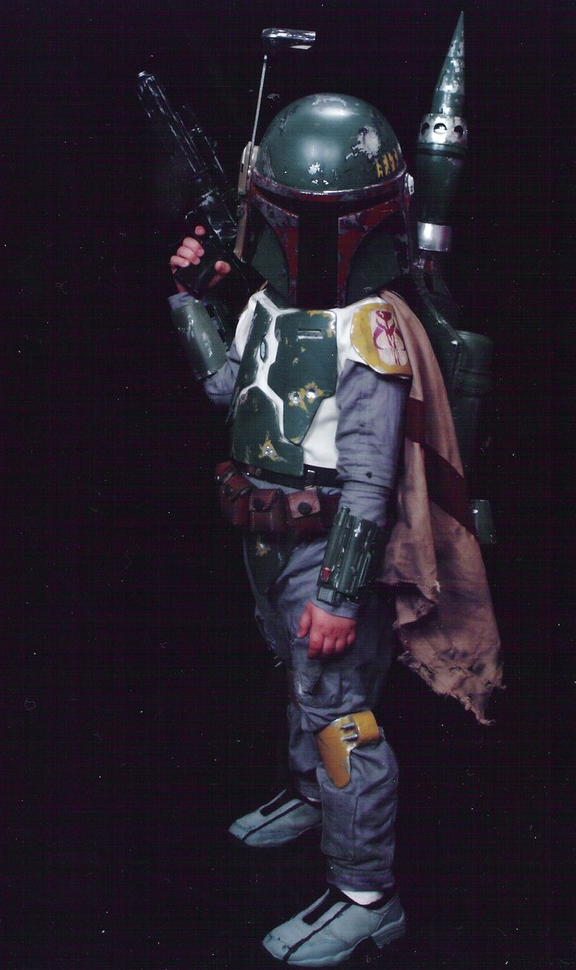