As I mentioned in the 1st post of my "build" thread, I wore my completed ROTJ costume to a convention this past weekend! 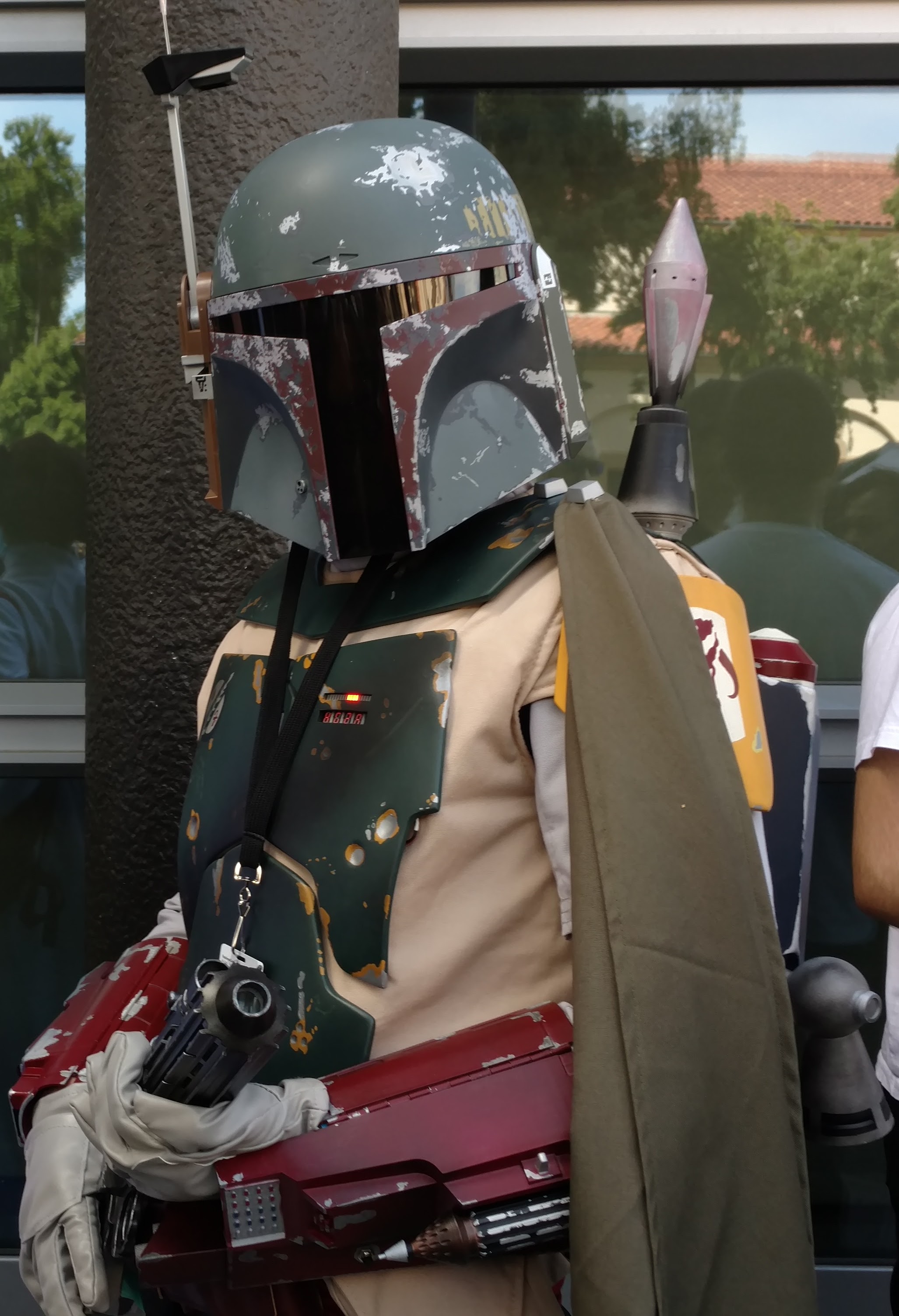 This was my 1st real "trooping" experience (wearing the costume for ~12 hours while walking around a lot) so I have some things I'd like to improve upon, and figured I'd ask you guys first.

1) The AliExpress costume I purchased uses a 2 piece "flightsuit". The pants have no lining while the long sleeve top does. Does the original flightsuit have any lining? The lining is a smooth material that was a bit loose, and had a lot of contact with my skin. Thus, it made the top very hot.

2) As you can see in the below pic, the knee armor seemed to easily slide down on me throughout the day: 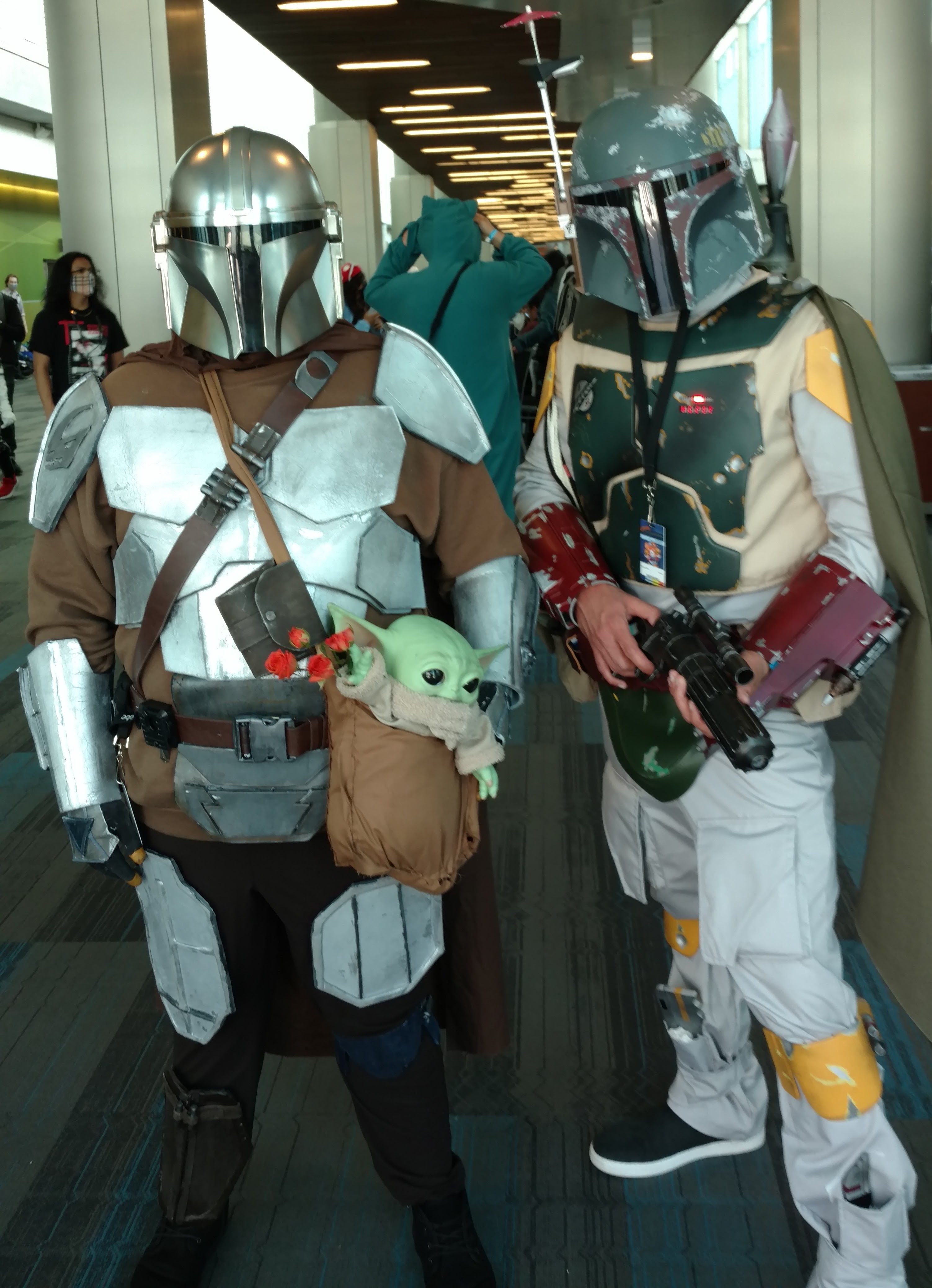 They're pretty light, being 3D printed PLA. How do you keep your knee armor from sliding down? I'm thinking of putting a webbing slider on the back strap so I can increase the tension. If necessary, I was also thinking of attaching some velcro to the inside of the knee and sew a matching piece to the flightsuit. Maybe even some foam on the inside would work to give it some grip? I was also thinking of putting a metal piece to reinforce the knee pieces.

3) As you can see in the 2nd and 3rd pics I posted, my cape has a tendency to spin and cover the left shoulder bell. How do you keep your cape in place? Looking at one of the Magic of the Myth references, I can see a little bracket. Currently, my cape has 1 button hole at the very tip that the keycap holds in place.

4) Has anyone played around with "touchscreen" gloves in a Fett costume? I noticed the gloves my AliExpress costume came with don't let me operate my phone. Going forward, I wouldn't mind more "breathable" gloves that also allow me to operate my phone.

5) (Bonus question) for the left chestpiece electronics, is there a piece of red plastic that sits on top of the LEDs and 7 segment displays? From one of the MotM images it looks like red. Just want to confirm the color. My costume is currently missing that entirely.

Sorry for all the questions, but if you can answer any of them I'd appreciate it!

Velcro on the knees is the way to go.

There is a red piece of plastic film covering the display slot.

Not sure why the cape is doing that. Is there any way to tighten down the stud that holds it?

As far as gloves go, I would invest in some gloves from Mike M. if possible or some ones from Man of War Studios at least. It is a bummer and sometimes a hassle that they are not touchscreen friendly though.

1. I have an Arkady 1 piece flightsuit and it's made from a medium weight canvas material, no lining. And in these warmer months it is warm to wear with all the gear on. But that's just part of the costume.

2. For the knees, velcro is definitely the way to go. Here's my setup. The elastic band in the back helps keep the knees in place as well as being part of the costume. Remember to use sew on velcro for the soft parts! 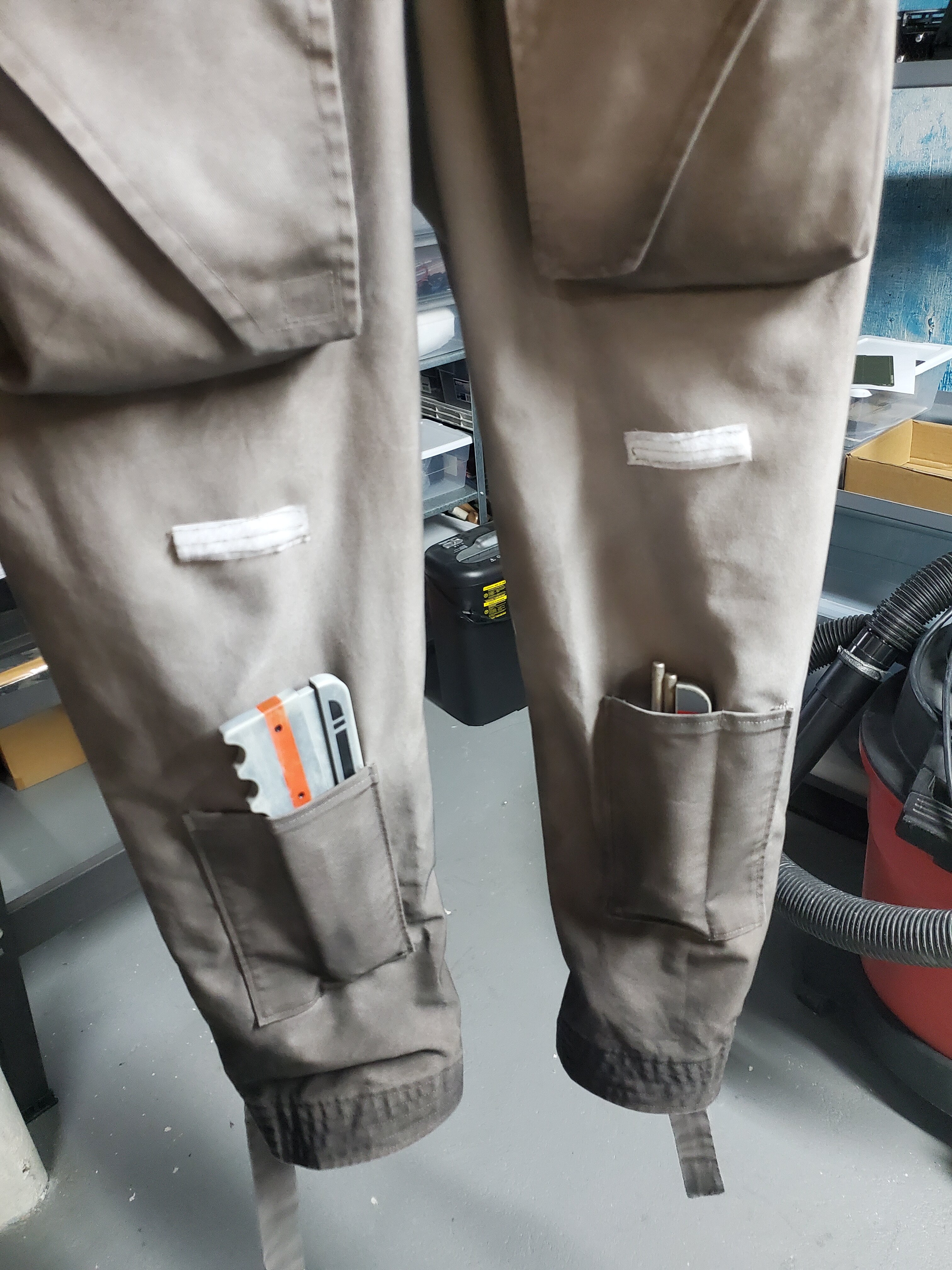 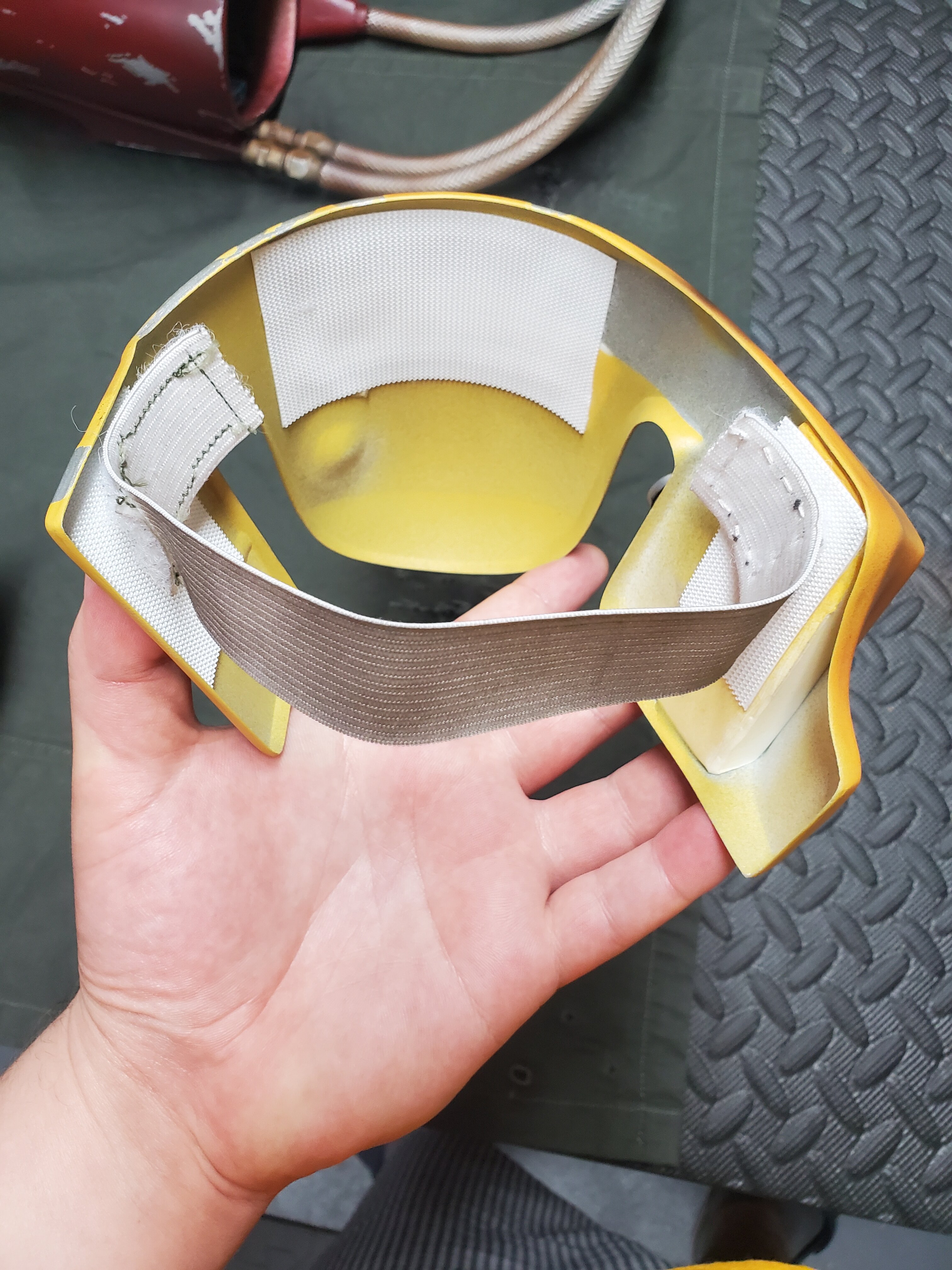 3. I think that's just the nature of the cape honestly. In the film you can see the cape covering the shoulder quite a bit. To avoid this you can tuck the cape behind the shoulder armor to keep it in place. 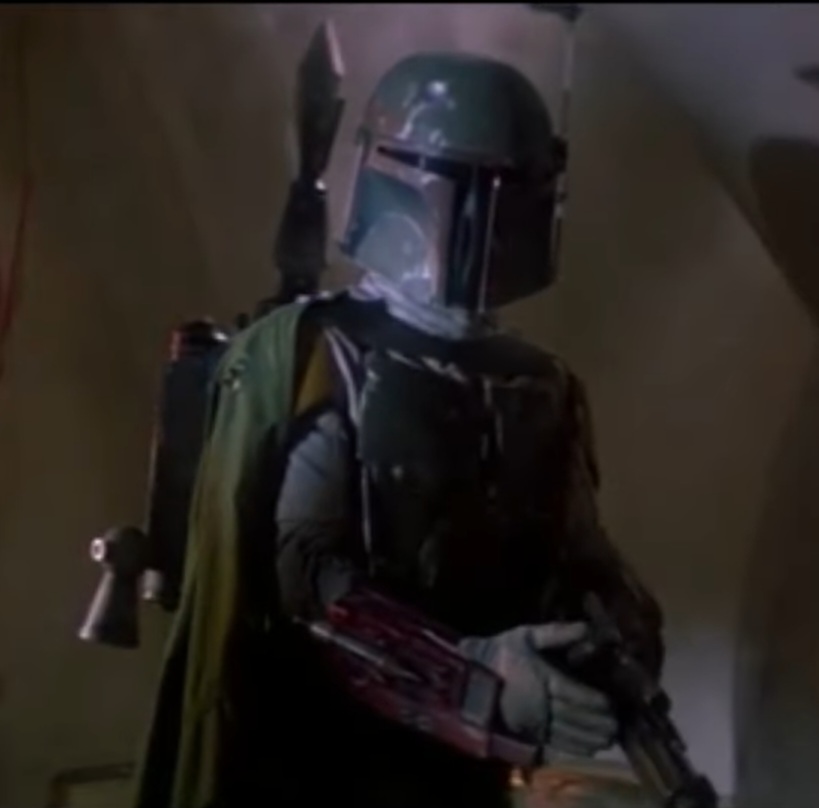 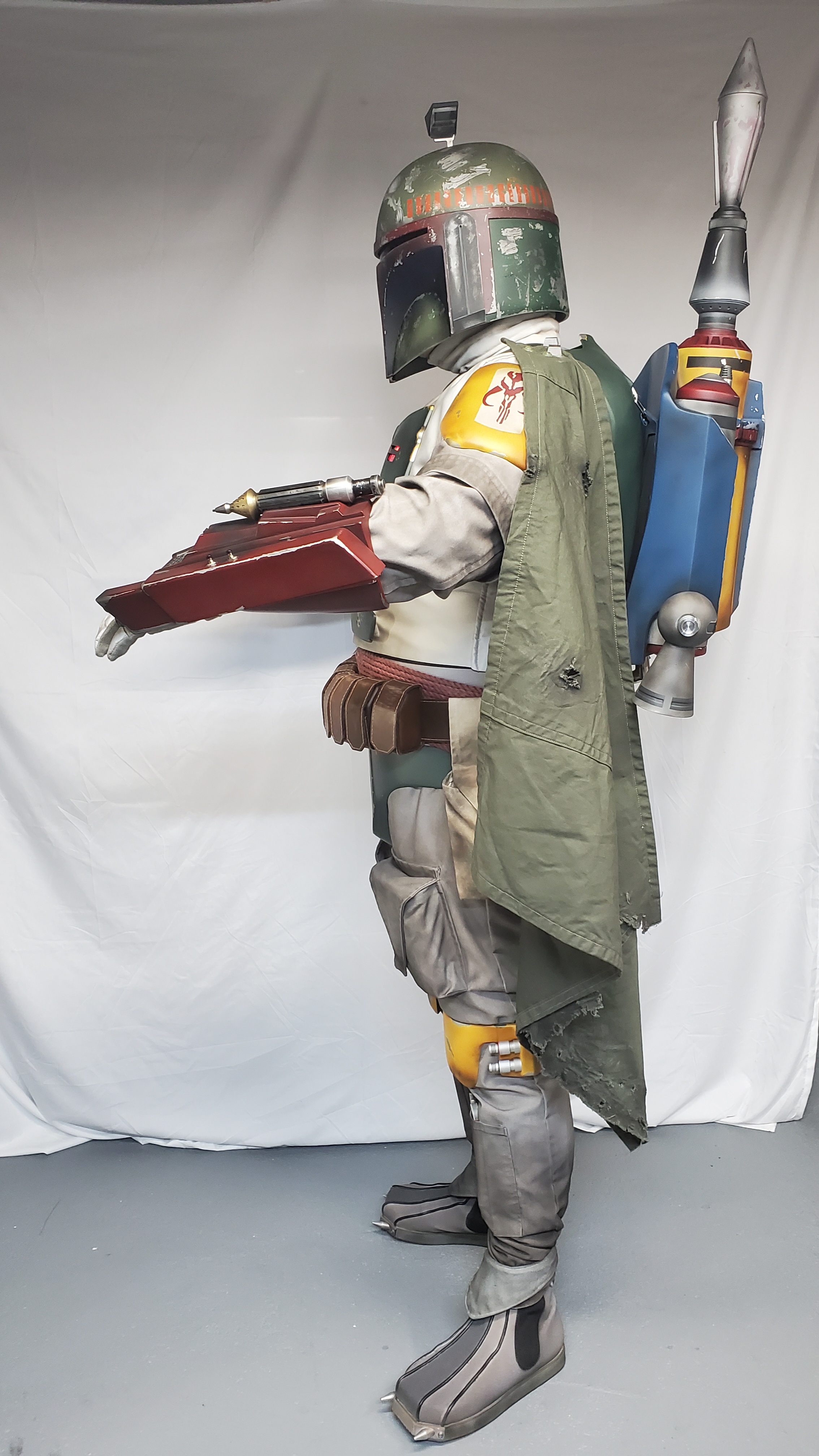 5. There is supposed to be a transparent piece of red plastic/film behind the chest armor, between the plate and the chest display.

Hope this helps! I also really like the idea of what you're doing, using a cheap costume and upgrading it. I've thought about doing this myself too.

TDH PREMIUM MEMBER
Bob A Feet
Not a bad Boba build on a budget! We all gotta make compromises in places. I'd ask the same thing ShortFuse is askin, can the stud be tightened more so the Cape doesn't have much wiggle room up top? Mine wants to do the same thing, but I have er' locked down pretty tight! 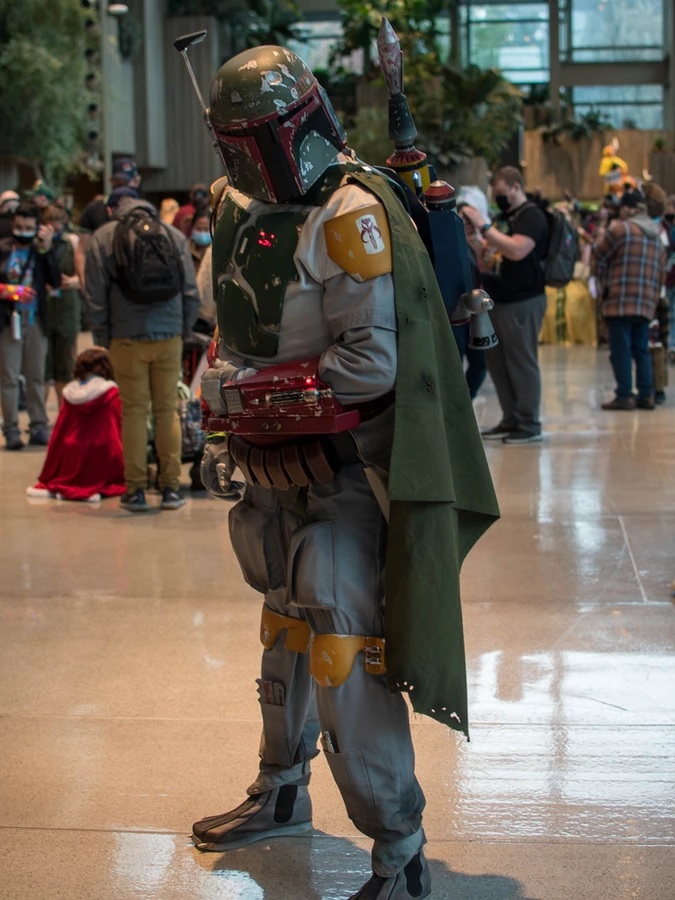 Bob A Feet said:
How do you keep your knee armor from sliding down? I was also thinking of attaching some velcro to the inside of the knee and sew a matching piece to the flightsuit.
Click to expand...

Your definitely on the right track with the velco. I've been trooping with mine a couple years now and glad to have made that decision. 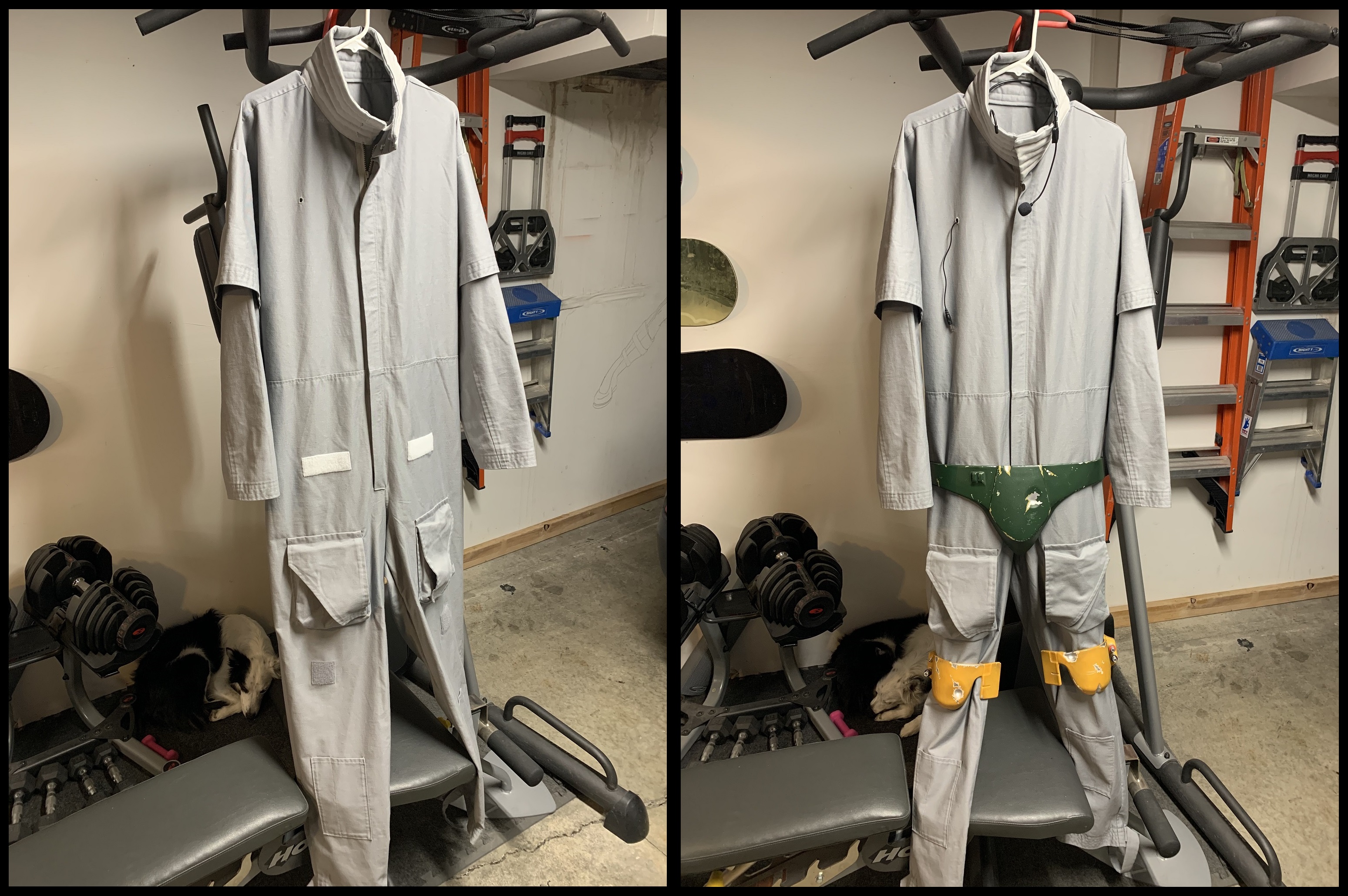 And just cause I'm a stickler like that, I actually removed my Cod Armor velcro on my flight suit and changed it out to match the knee armor’s velcro, which matches the flight suit. Should be done this weekend - it’s at the alterations shop!

Bob A Feet said:
How do you keep your cape in place? Looking at one of the Magic of the Myth references, I can see a little bracket. Currently, my cape has 1 button hole at the very tip that the keycap holds in place.
Click to expand...

I clicked on your link and this pic came up - I've circled it in RED what I think your referring to, yeah?.... 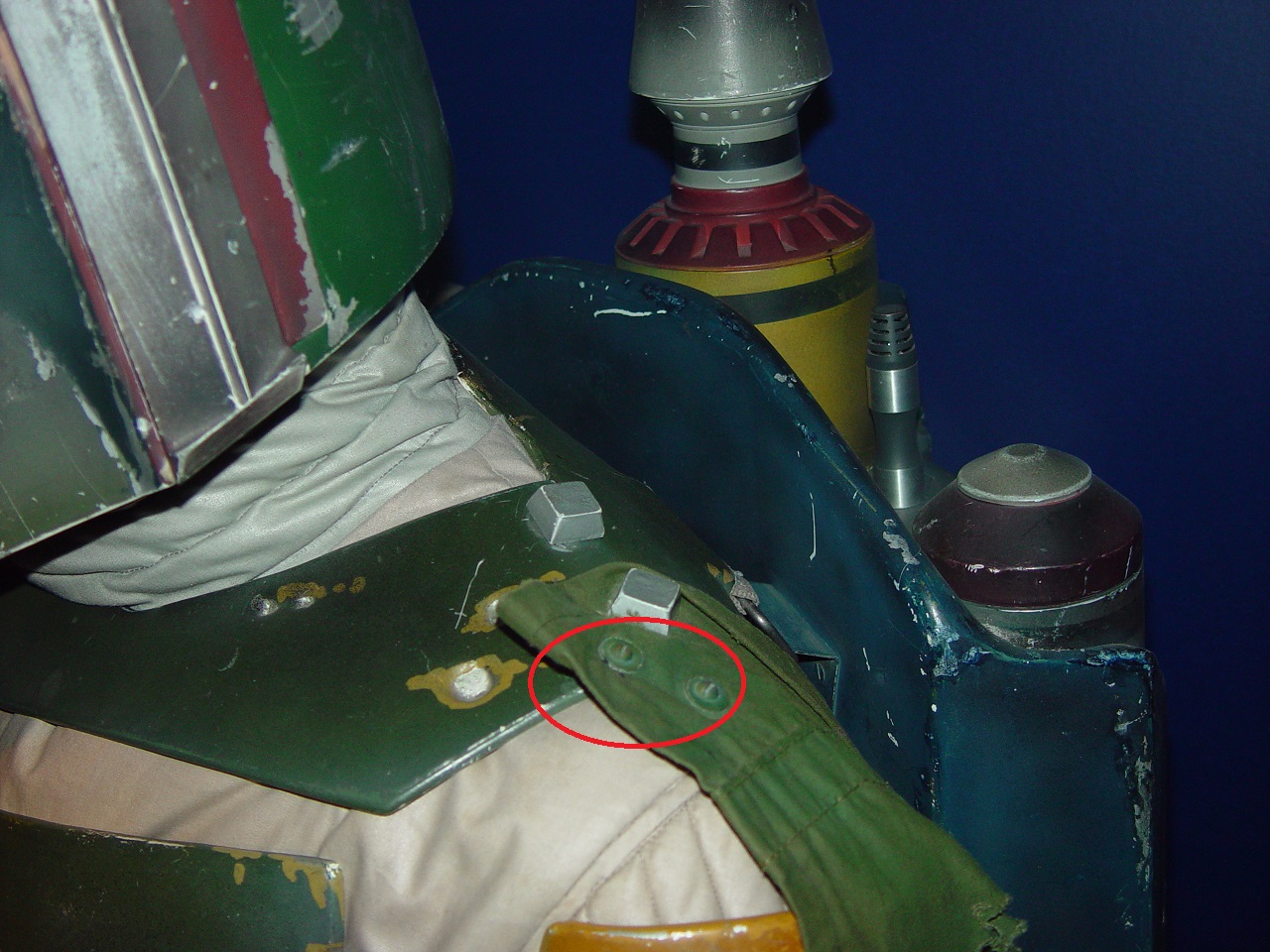 Based on my research not too much is known about this piece. But you can see it in a screen shot too.... 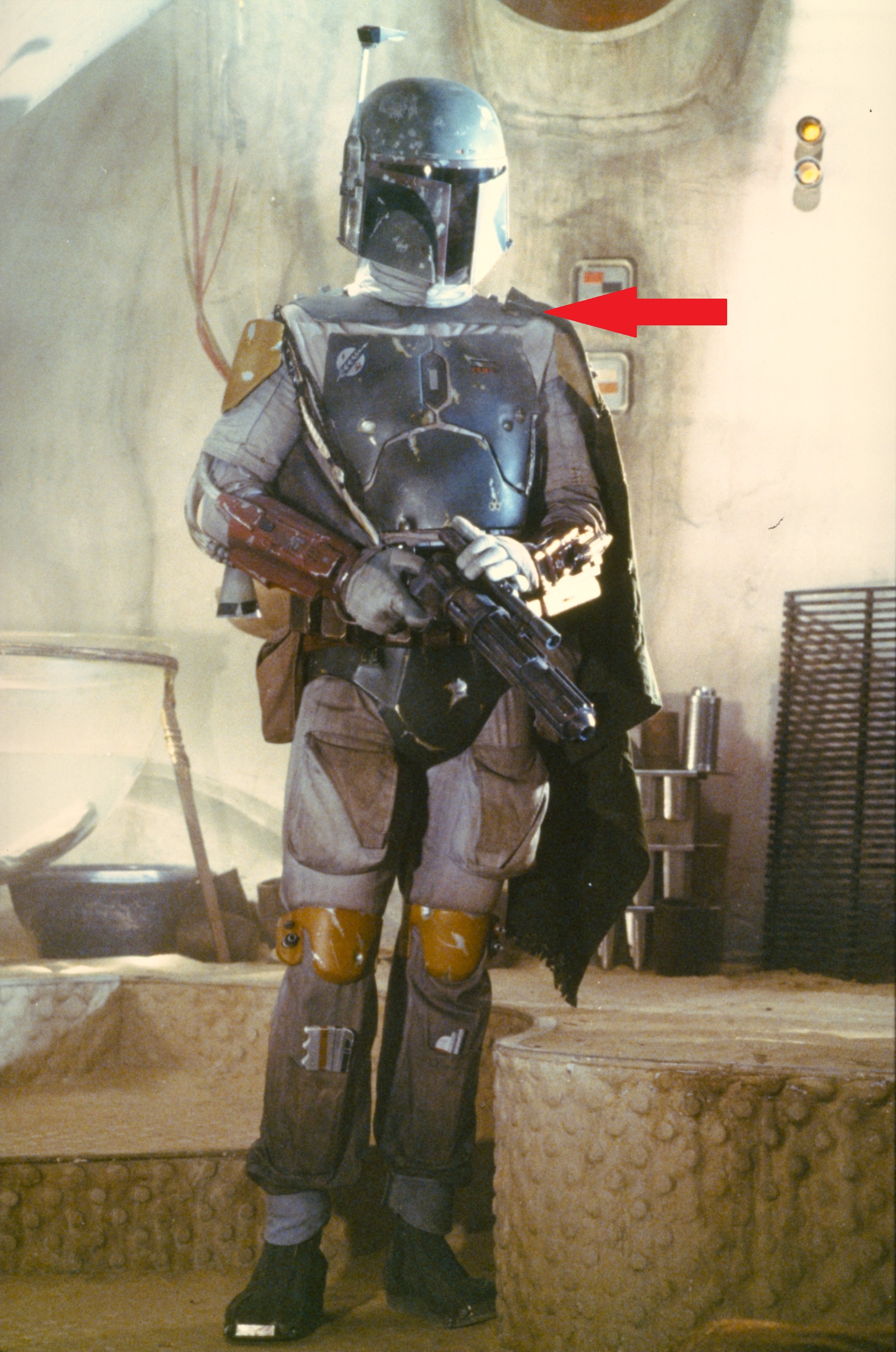 The 501st makes mention of it, but is only needed if you were going for that Level II "Infamous" Certification....

I attempted to emulate it by shaping a piece from a Polycarbonate Sheet, the product is called Lexan and is advertised as Virtually Unbreakable. (Good enough for me!) To me, this is purely for looks, so it is not functional in any way and does absolutely nothing to hold the cape in place. But here is my iteration of it and the end result.... 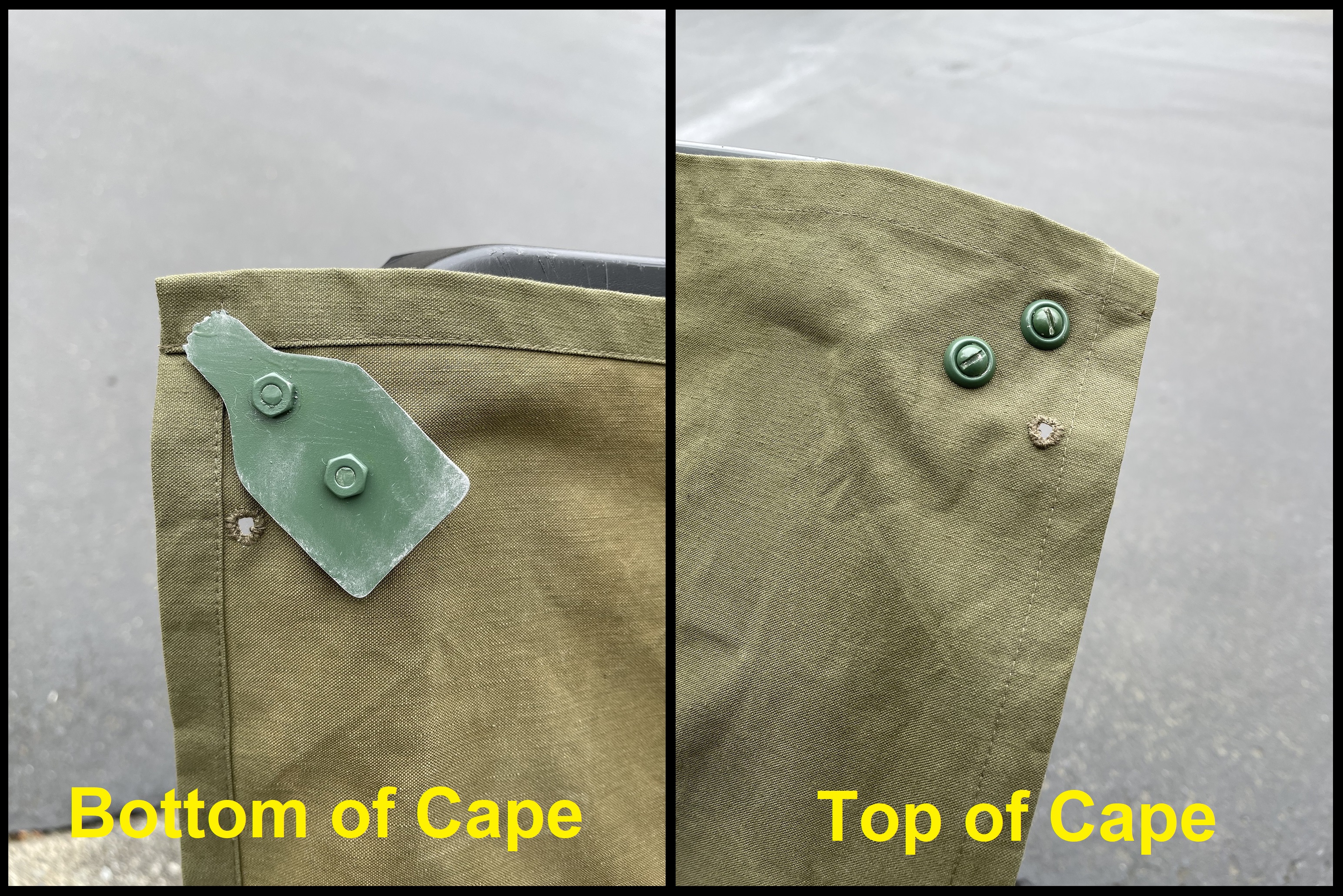 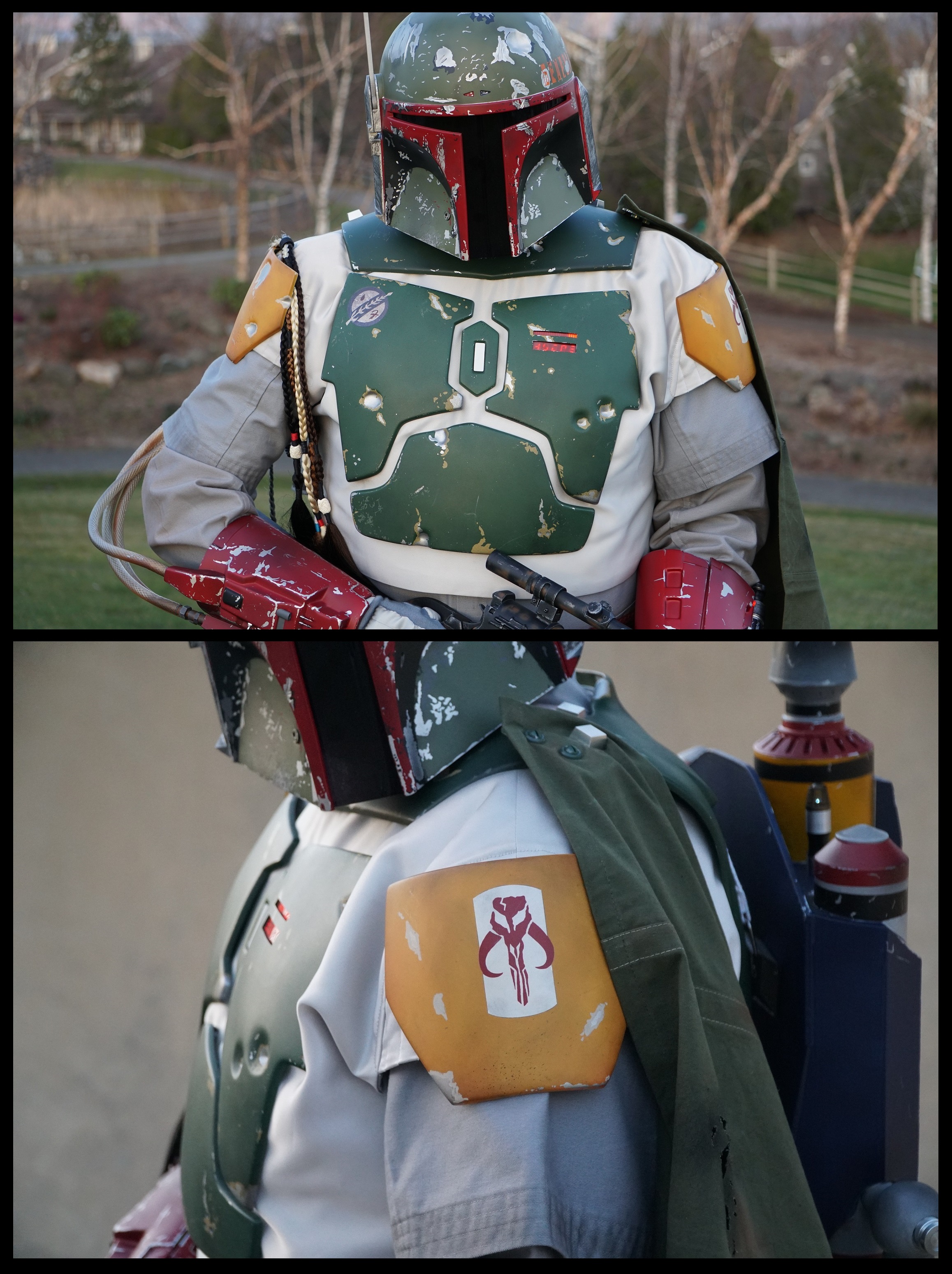 In the coming week here, I'll be offering a small run of these "ROTJ Cape Greeblies" as an "Unfinished Kit" and as a "Finished Kit". Both kits will include the necessary hardware to mount it to the cape. So, if interested stay tuned to the Cargo Hold!


Bob A Feet said:
for the left chestpiece electronics, is there a piece of red plastic that sits on top of the LEDs and 7 segment displays? From one of the MotM images it looks like red. Just want to confirm the color. My costume is currently missing that entirely.
Click to expand...

As ShortFuse & PinkFlamingos6 mentioned it is a piece of Red Film, again the 501st makes mention of this in their CRL....

With a few drops of super glue this will stick in place on the armor.... 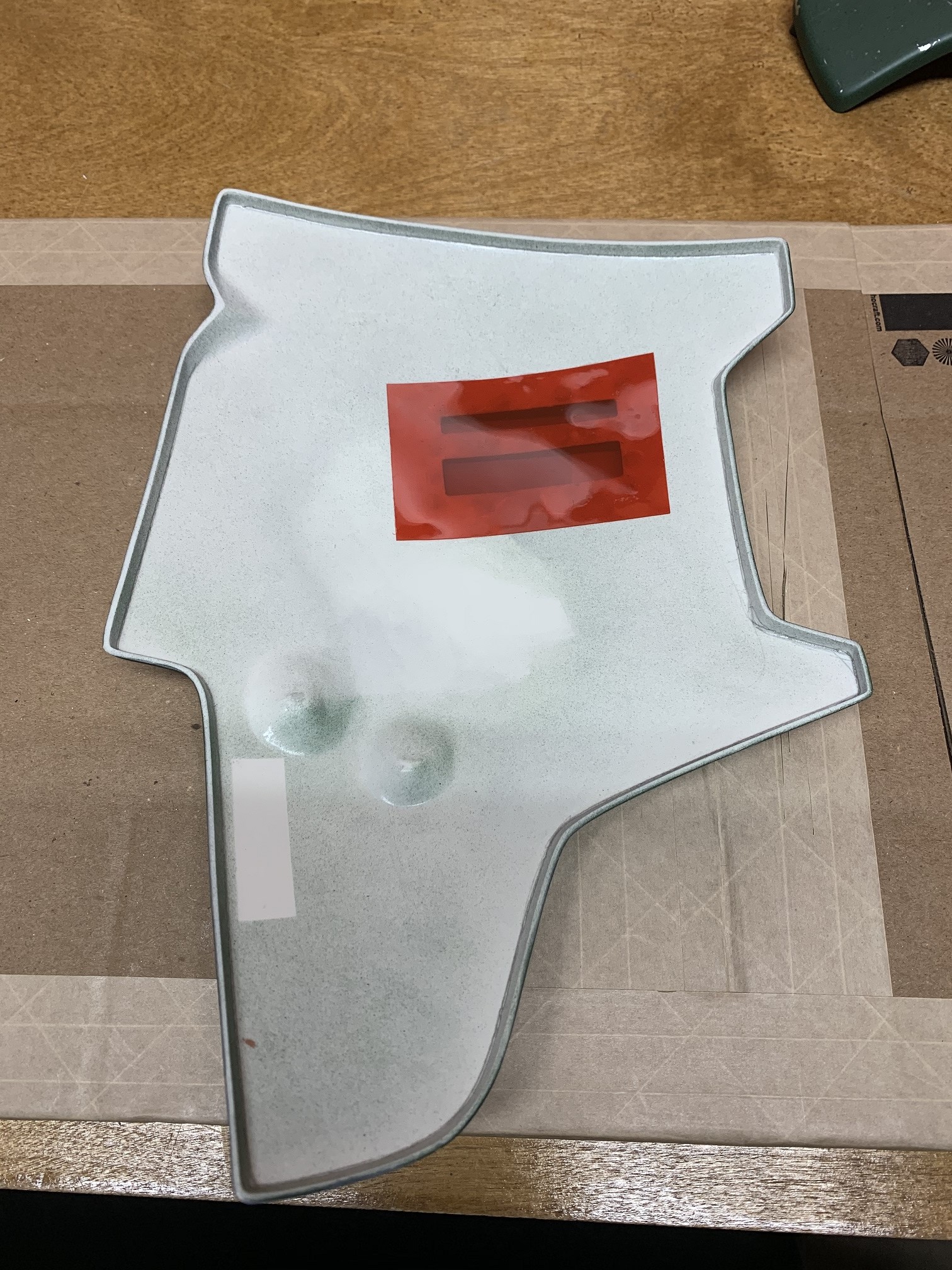 Tell you what....I have a lot of this Red Translucent material left over. Give me your measurements and I'll send you one! Take notice of mine and how much excess I have. You don't want super glue going near those openings when you press it down and potentially ruining your paint job. I'll even pick up the shipping. (Send me a PM) Many folks here have shown me some very kind generosity during my own build. So, I can definitely pay it forward here!

While I'm thanking people, I need to give a shout-out to RafalFett, stormtrooperguy, and thatdecade for their help too.

1) Sounds like once I find an alterations shop I like / trust, I will remove the lining from the flightsuit. Should make the costume a little cooler, but also make it easier to do work on it going forward (need to redo / undo some things).

2) Glad to see I was on the right track with velcro for the knee armor! I'm going to start by adding a triglide to the elastic to give it some possibility for adjustment. I think some foam padding on the inside might also help provide some friction to keep them from sliding. If those don't work, I can always go velcro later (no harm, no foul).

3) I'll start by tightening down the keycap that's holding in the cape. It's just a screw from the backside of the collar armor, so even when it's tight I think the whole assembly (screw, cape, and keycap) can pivot. If I can come up with a bracket to keep it from pivoting, I might try and implement that 3-point bracket as well. In the meantime, putting the cape on tight and getting a friend to help position it behind the shoulder bell will probably work fine.

4) I've been researching the gloves. According to the 501st reference, the originals were made from military dress / parade gloves, which seem to be a lightweight, decorative glove. I'm going to scour AliExpress more, but I think some lightweight "touchscreen" gloves might serve as a decent base:

If the gray ones are too dark, maybe I can dye the white ones. Either way, I can add some white fabric to the backside to mimic the originals.

5) Thanks for the confirmation on the red plastic! I looked around online and a couple people mentioned it's not red, but a more "smoked" color. A couple other threads on here just mentioned a red acetate sheet, folder, or some kind of camera film. I'm sure I can find something that'll work, but will send you a PM as well, Irongladiator

6) Bonus question: is there a specific screw size for the ROTJ toe spikes? 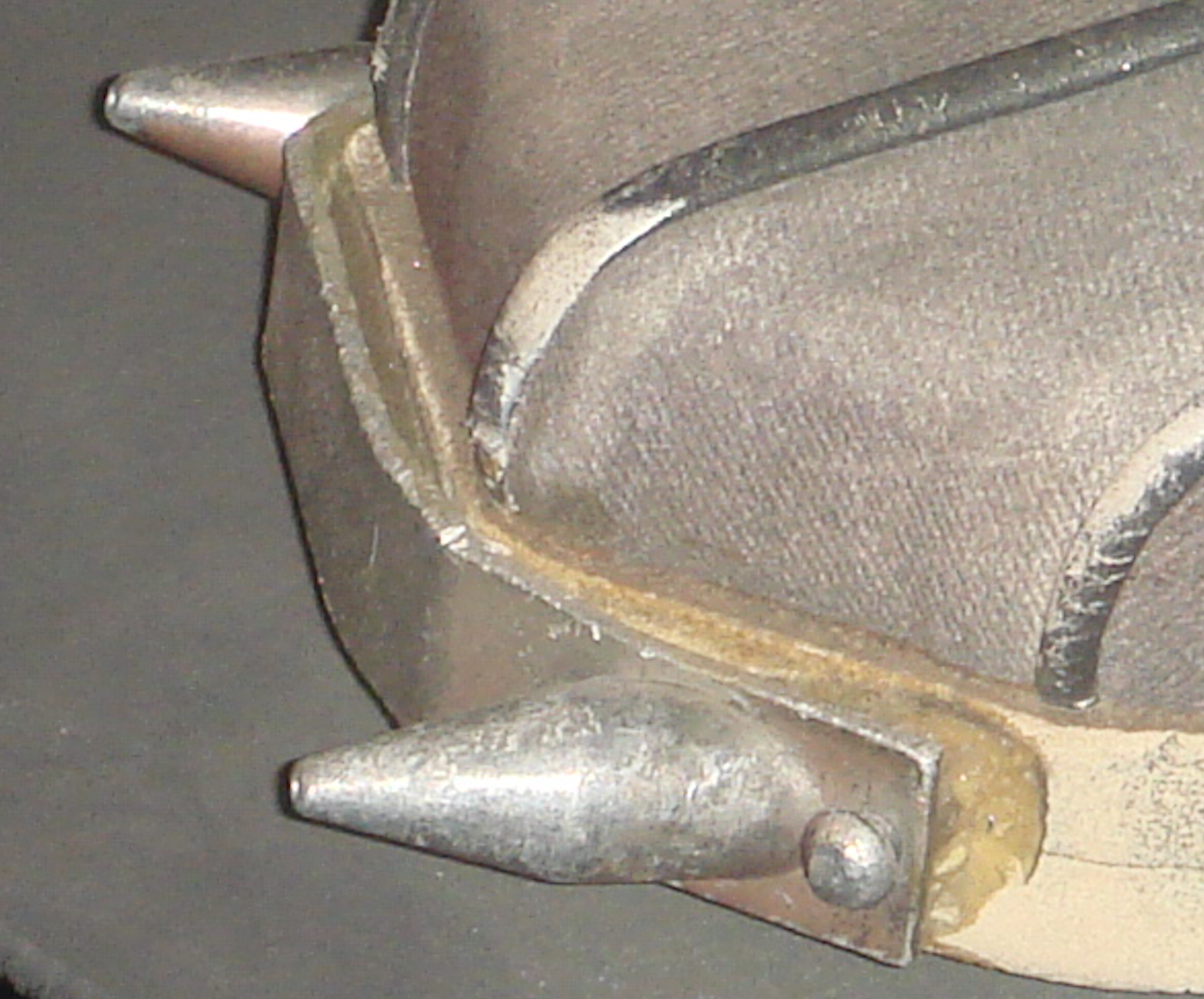 Using the original model from RafalFett, I measured the hole size as 3mm in diameter. Obviously I could make them a little larger if needed. If there's no specific size, I'll probably estimate based on the head size in the reference pics.

Bob A Feet, Awesome work! We chatted by email a whole bunch on your chest display circuit programming. I am super glad to see it all put together~!

I figured I'd share my progress on some of the changes / improvements I wanted to make to my Fett costume.

I've done a lot of searching for some touchscreen gloves that'll work as a base for my costume. The gloves that came with the AliExpress costume look OK, but are a little warm (kind of a fake leather material) that are hard to take off and don't allow you to use your phone while wearing them.

They're not accurate, but I ended up buying these for $10 on Amazon: Bienvenu Gray Driving Gloves for Men: 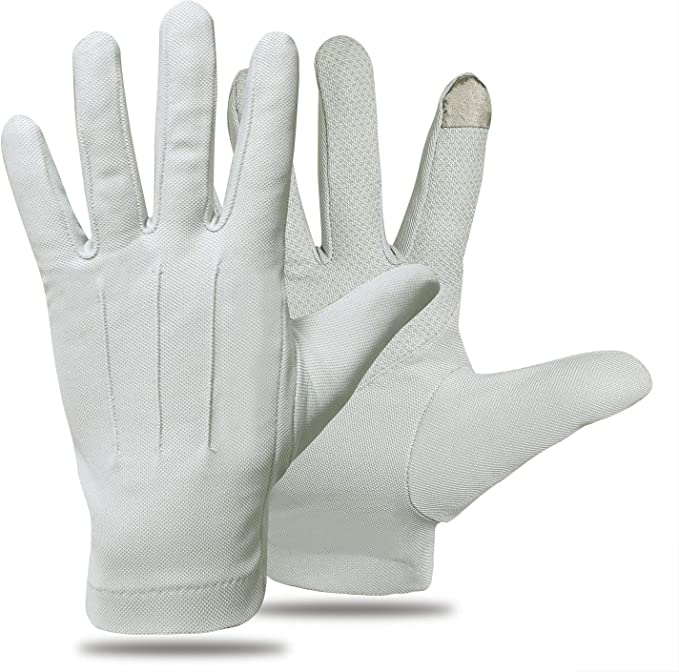 As you can see, the index finger has touchscreen capabilities. I ended up removing the 3 vertical "lines" by undoing the stitching from the inside. A quick steam / iron and you can't see the lines anymore (might not be necessary since they'll be covered by the white fabric, but it could give a little more hand room).

I must say, the gray is nearly a perfect match in color to that of the AliExpress costume: 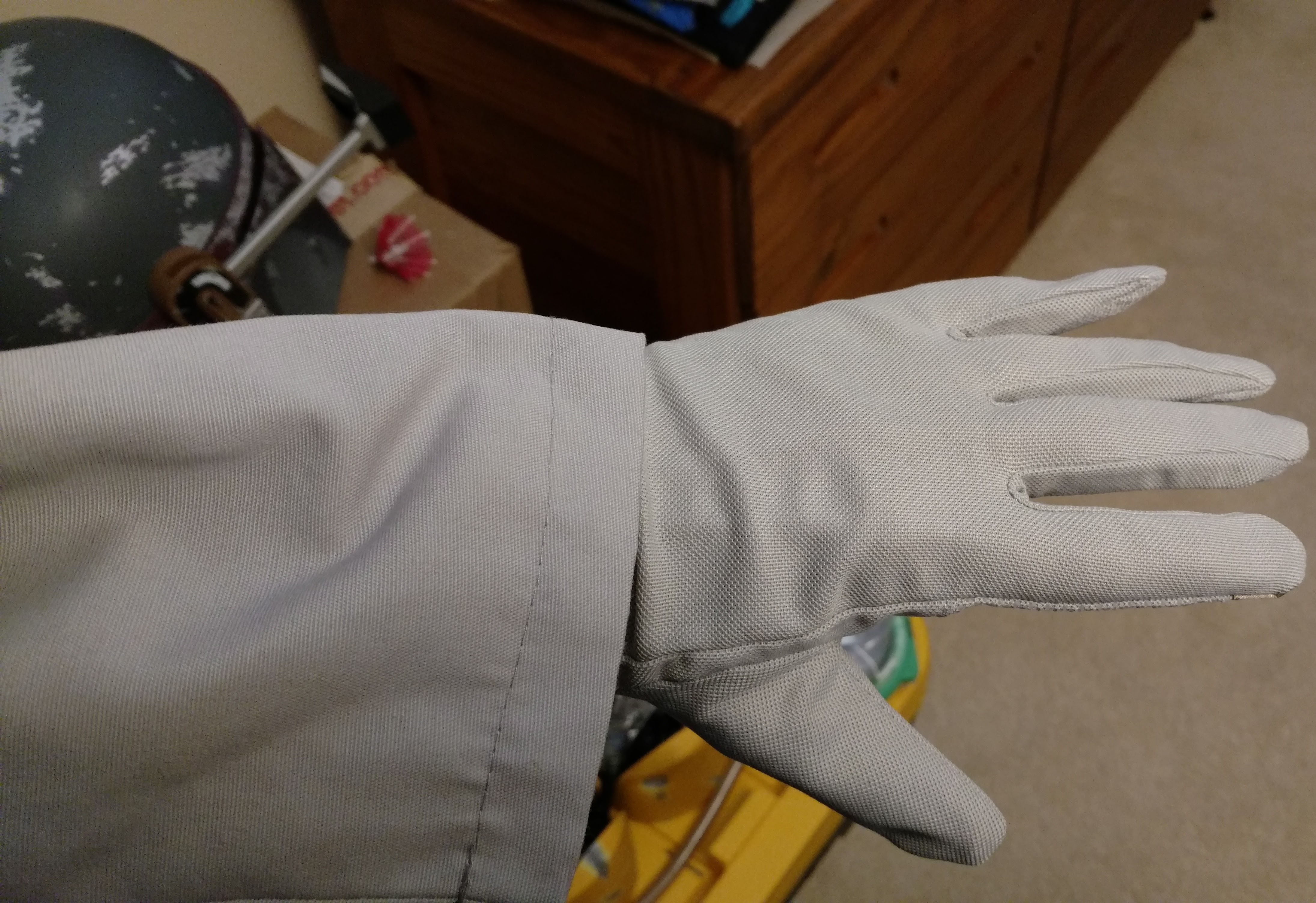 Idk if that's accurate to a Fett costume, but my mentality is to match the gray of the flightsuit, gloves, and shoes before weathering.

The only things I don't like are a) that the fabric has a looser "weave" to it than the flightsuit, and b) that the other side of the glove has clear / beigeish rubber balls on it for grip. Might be handy if you are handling your phone, but I don't think it's completely necessary. Overall, I'm very happy with them though.

Next I'm going to get some white fabric (and I think some foam?) and hand stich the white parts onto the gloves. I've found some tutorials on this site before, but haven't searched for them recently. If anyone can point me towards some good tutorials I'd appreciate it!

TDH PREMIUM MEMBER
You could always remove the finger tip pieces that allow for you to use your smart one and attach them to the correct style gloves.