Im so pleased with how this turned out especially as most of the hero colours are now known to be a match to the vintage Floquil Hues, Still got some tweeks to be made on the next one but its looking rather special I think, Its painted by Jon Bird here in the Uk and resides in its new home in the USA now. Cant wait to try this myself now and get a few more done to see how far we can take it. Really hope you enjoy looking at this as much as I do. All vintage Floquil Hues aside from the silver base and all from our range, a few new colours will be added asap that we know are even closer than our current line, Rome wasn't built in a day !! This paint up is the start of some really interesting developments and Jon has done an amazing job at capturing the feel of Joe's work.

Preferred Vendor
Saw this on facebook... excellent work, and those paints are amazing... i will likely be switching to them in the near future as a run out of the floquils Model masters and humbrols i currently use.

Theres a LAUNCH25 25% discount code on at the mo as we just launched www.archive-x.com

1975 D&H caboose red, confirmed to be the correct red for Fett helmets from ESB
1965 Earth or Earth Lt as we call it, again confirmed to be the correct ear colour
1975 Rust
1975 Engine black, though Jon did use Brunswick Green on this helmet for the black
1975 Dark Green.......
We experimented for a long time with the green on the rear and realised that when its mixed with Engine black it is identical to the rear, though mixing wasn't that common, after huge amounts of Floquil research there was just no colour that did the rear back in the day. So when the mixing theory was tried it just worked and is also matched, its possible its layered with black over the green but to get the translucent look it's likely a mix. The red Helemt can sometimes appear to have a dark Blue to it, this is the effect of the added Engine black

Dark Grime.......
This is a colour that shifts time and time again in hue from year to year, we've always suspected it was Grime behind the Dark Green and its confirmed now with a new swatch of vintage grime we have, its a tiny bit darker than our current grime but the same colour, we're still deciding if its worth developing just for Fett but after weathering and the rust/yellow stains are applied you'd never tell the difference

1975 SP Lark Dark Grey....
for years its been suggested its Reefer Grey on the helmet, thats because the newer enamel range fro Floquil thats more common Reefer Grey is closer to the older SP lark dark than the old Reefer grey but it is not the same hue... SP Lark Dark is confirmed a match to the helmets

1975 Light Green.....
Is still up in the air if Light Green was the base for the dome and cheeks, Im adamant it is as so far every other colour is coming back as a vintage railroad colour, no military colours and some that are currently suggested weren't actually in production when the helmet was painted, though very nice and close not historically correct. Light Green is the only RR colour possible that could be the dome, but painted as JJ did back then its a maze of layers , opaque layers and misting and staining. Historically its obvious but the jury is still out

For the dark Marron, this again has been so frustrating as I see Maroon and also weathered black, Floquil vintage Maroon just isn't dark enough, we've bought many vintage bottles and can't get the results from them. In a test to match the colours we see on the helmet I decided to try the same theory as the Dark Green and the results where almost instant, be it historically correct I doubt we will ever know. mixing D&H Caboose with Engine Black gives the perfect dark Maroon colour that appears both red and Maroon and Brown in various lighting just as the original helmet.

One thing that keeps occurring is that the Floquil weathering colours are used for weathering and also used for black colour, its a pattern with the ILM style that was formed by JJ

The reason we focus on vintage hues is they do not resemble the modern enamel range by Floquil in Hue, the name stays the same but the colours are different. Hence the Reefer grey situation

AT archive-X we are mostly focused on the historical choices as opposed to what is considered the norm. One thing though is that these colours raw are nothing like the mixes suggested that Ive seen and the key to any good Fett regardless of colour is the artist and their talents. Ive seen some incredible helmets done with all manor of paints but we prefer historically accurate asa starting point. seems like the best place to start for us.

Thanks Art. I know you know how much time and energy we've invested into this and your support has been huge. Always appreciated and never taken for granted
Last edited: Jun 23, 2019

Another theory that I believe from studying the ref is that the reds extend beneath the black in the cheeks, thats why you see a maroon shade to it in certain light, its the same on Slave 1 in many areas, they seem to just go over it, Im convinced there is some opacity to the black and beneath is Red and Grey. Ilm worked in very thin layers when layering, though the steps in the upper helmet on the paint lines are more solid, under the black was not as thick as just over the edge work and likely not masked off.
Last edited: Jun 23, 2019

Community Staff
Everyone should be reading post #4 again and again and committing this to memory. This is gospel.

Wow, this is incredible. Makes me consider a repaint

Preferred Vendor
Excellent info! Now i know which colors to get when i get some cash flow again...things have been slow lately

Thanks, though the credit is down to more people than just us, it’s a team effort

Art Andrews said:
Everyone should be reading post #4 again and again and committing this to memory. This is gospel.
Click to expand...

I’ll be ordering some paints soon

Will acrylic versions be available at some point?

superjedi said:
Will acrylic versions be available at some point?
Click to expand...

They will , hopefully around Christmas time but they will be waterborne not solvent based, we’re experimenting with different formulas now to get it as good as we can

ArchiveX said:
They will , hopefully around Christmas time but they will be waterborne not solvent based, we’re experimenting with different formulas now to get it as good as we can
Click to expand...

That's good to hear. My wife is asthmatic so I have to be careful about the kinds of materials I use.
R

This thread is extremely enlightening. Wow.

And DEFINITELY interesting. What I’m curious about is that when you say ‘confirmed,’ such as the D&H Caboose (which I have a vintage bottle of), how has it been confirmed? Not doubting your amazing work in ANY way, WHATSOEVER, but when you say that, it opens up new questions. I’d love to hear more about how these paints/colors have come to be confirmed. Also, in addition to the finished photos you’ve posted, are there photos of a ‘step-by-step’? I’d love to see the individual colors laid down, especially the dome and cheeks. I’m not familiar with that color, but after all the work you’ve all done, I’d be extremely interested in seeing how it looked bare, without all of the shading and washes and layers on top.

Again, all respect to you and your crew. But it’s so amazing what you’ve done that I want to know more about the process that led you to feel solid about your findings.

Since you’re monetizing this, I certainly hope you’re willing to share how you and your crew came to these conclusions (and especially the ‘confirmed’ status that you’ve said - confirmed by who?).

Sidenote...I’ve ordered all your paints, so I’m not just trying to poke holes or anything.

I can't go into specifics but I have people who use my paint in the industry and that have archive access and studies have been done alongside many items in the archive both on ships and costume by many different folk.

I ordered some of the 1975 Dark Green for my helmet, but also included in the package was another color labeled Dark Green (LT) EX-80. I didn't see it on the website and I don't know much about it, does it have any relevance to Fett? Looks like I could possibly use it for the armor although I’m not too sure about that match. 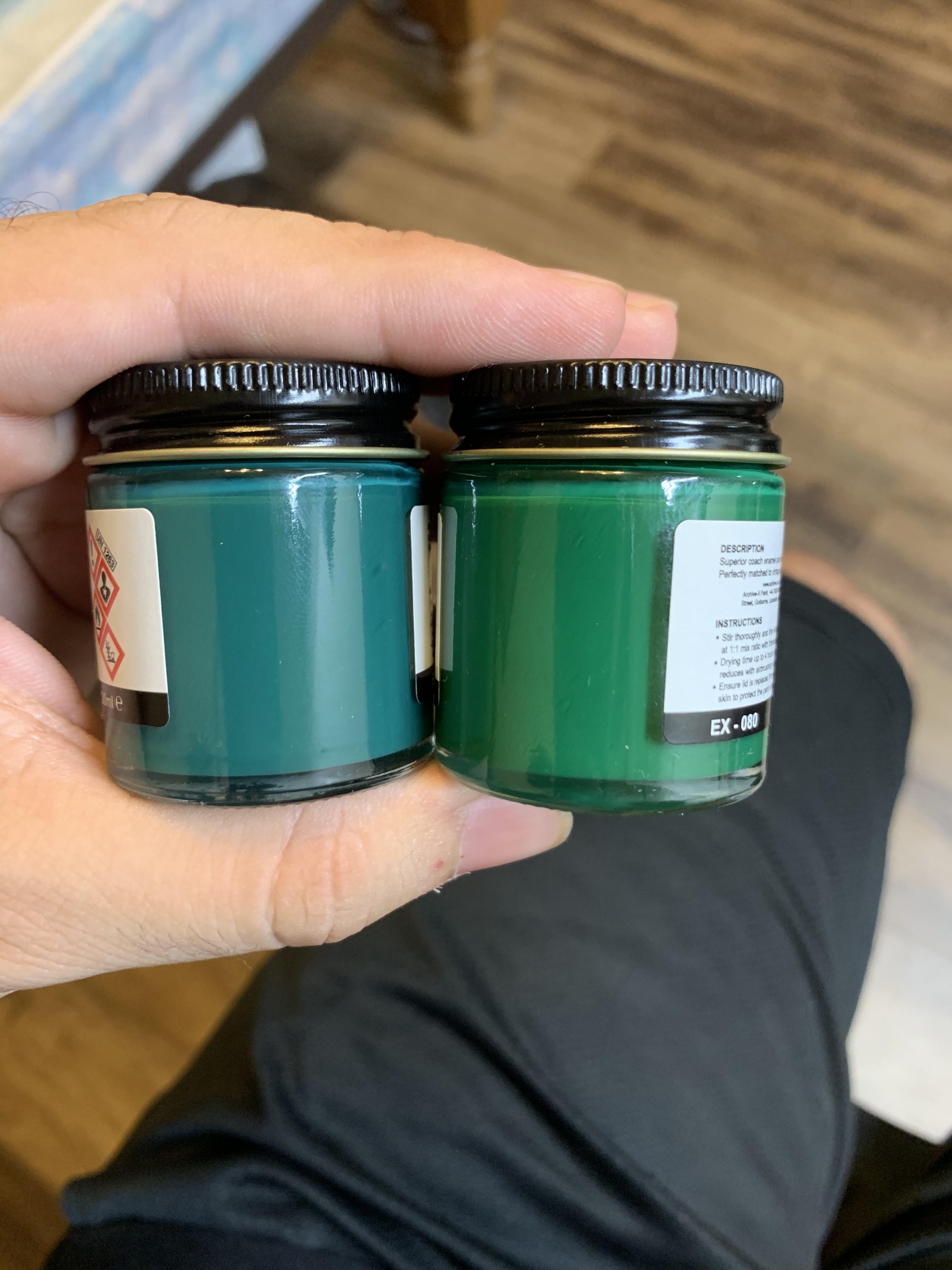 robotzo said:
I ordered some of the 1975 Dark Green for my helmet, but also included in the package was another color labeled Dark Green (LT) EX-80. I didn't see it on the website and I don't know much about it, does it have any relevance to Fett? Looks like I could possibly use it for the armor although I’m not too sure about that match. View attachment 177528
Click to expand...

Shhhhhhhhh.... Not so many questions. You got free paint... Time to melt into the shadows

That was a gift as we had a slight delay sending your paint, its a colour we had done as a test that we're unlikely to run in the future. Some of the 60's colours are more accurate in hue to SW, but this was a little off, but you can see howe the colour developed over time as there is a stark difference, and that's the point of Archive-X to track down the correct hues