Well, after about 16 months of searching, buying, building, going in debt, making a mess of my basement, losing sleep, etc. My Jango is finally reaching the finish line. I still have to tweak here, trim there, and put the finishing touches. I hope I have done the dented helmet gang proud. It is my honor to present to you my almost final version of Jango:

Edit: Woops, I thought I was in the Jango forum. Could a moderator please move this there? By the way, these photos were taken today at our garrison's fundraiser for Katie, the 501st Legion Commander's daughter. You can visit http://www.forkatie.org for more info. 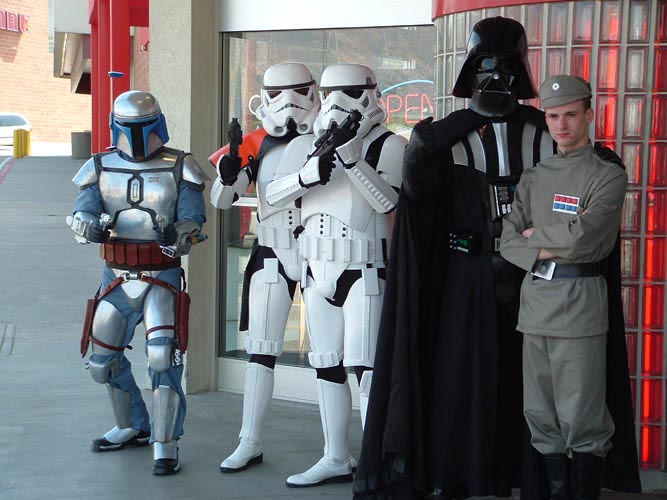 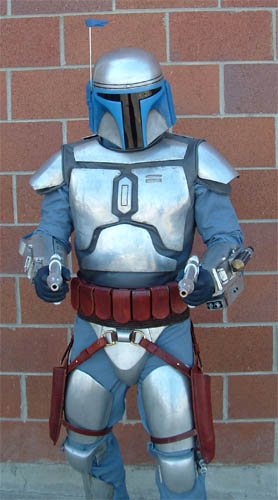 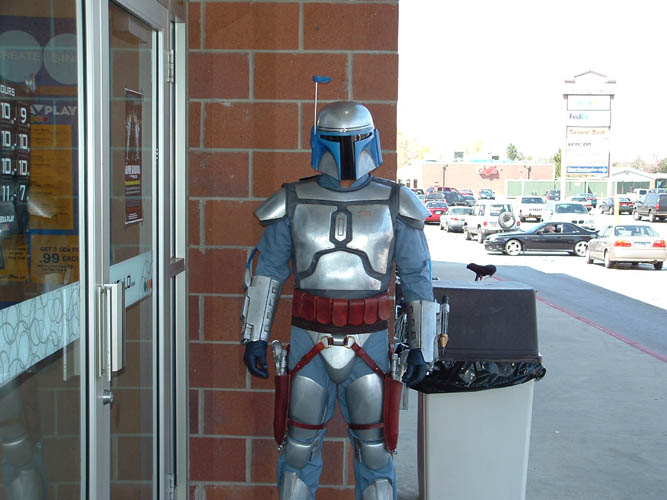 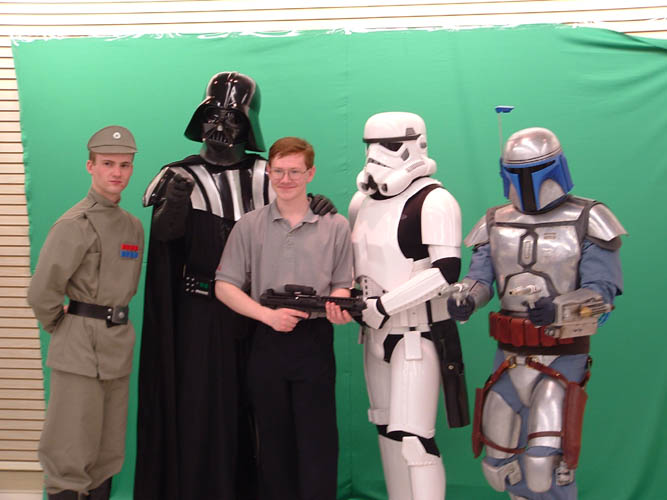 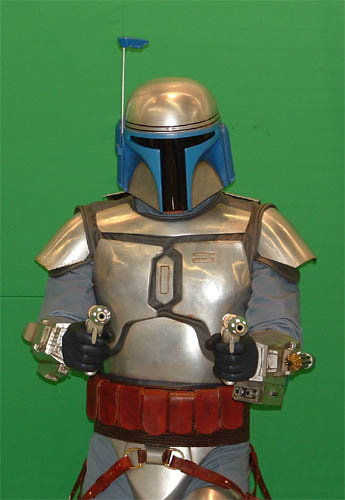 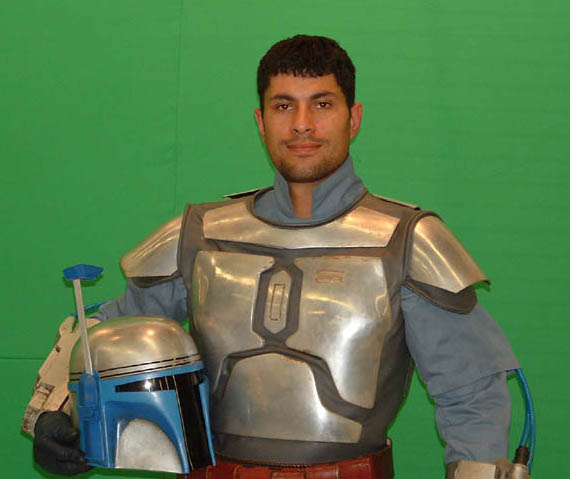 Thank you. The armor is not RA. It's JD. The jumpsuit is actually made from a postal blue Red Cap jumpsuit and another Red Cap lab coat used for extra sleeves with the sleeves modified for the placement of front and back seams. It was all taken in, trimmed, pockets removed, button holes added for leg straps and under the sleeves at the top, back pack clips were sewn on to attach the gauntlets. The gauntlets, however are man o' wars. The boots are reinone and the leatherwork was done by a local craftsman according to mupltiple images from the Jango Fett Reference CD, including complimentary snaps for the boots. I crafted the cod loop with a piece of pvc pipe cut in half and the two curves cut on a downward angle and glued to a flat piece of sintra and attached to the braided belt. The vest was hand sewn by a talented gal in my garrison and the hoses were from a contractor's supply store that I have an account with, since I'm a contractor. The knee darts aren't accurate, but I can unscrew them and put in knew ones anytime. The only thing I lack is a neckpiece, red led light for the one gauntlet, a jet pack (getting a loaner for CIII), and that's about it. Man what a ride this has been.

amazing man! And you look right for a helmet less appearance aswell!!
R

You think?
I reckon this is more accurate... 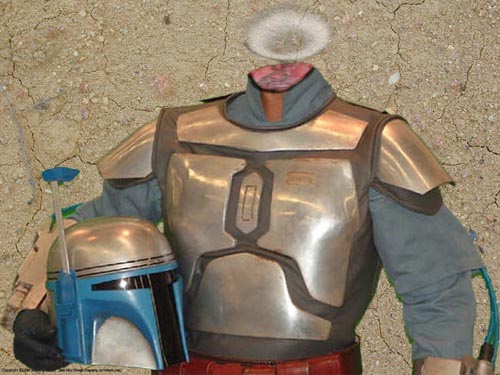 The hard work has definately paid off.

Really, really nice. I love the shine on the armor with the slight weathering. You look right on!

Truly outstanding, Marc! That really does look amazing!!! All the hard work
has paid off. TK409 is right... the shine to weathering ratio is perfect on the armor.

Great costume...I wish my custom would look half as good as yours

Damn, that just really looks fantastic! The armor placement on the chest is perfect! Let's leave this here a few days for everyone to see then remind me to move it to Jango. My only suggestions are get a balaclava so your neck doesnt show and change out your gauntlet hoses- there is a recipe for dying clear ones and they turn out real nice. It is in the official gauntlet thread I believe. Aside from those 2 things, (oops, and no jet pack) you look outstanding!

Very good that is awesome, I like the way the lower half look alot. All the armor is placed perfectly and looks exact to me. All you need is a jet pack.

Yeah man and for the gaunlet light, when I did my Jango a while back, I got an appropriate sized LED and the LED housing cover from Radio Shack. They also had a Blinking led pack that was powered by 2 AA batteries. It was about the size of a pager and was 4 bucks and had a super bright led flash, so what i did was clip the diodes of the big led and placed it over the litle one on the pack ang attached it to the gauntlet. Looked awesome. It lasts for about 7 hours so you could definately use it for troopin.

Wow, thank you all for the compliments. I can truly aprreciate the time, research and effort that everyone has put into this site and their costumes. Chris, Preston: I spent hours and hours in front of my reference CD images on my computer just to match up the color and weathering. It's not exact, some a little personalized, but pretty darn close. Mirax, I do have a balaclava, but it's a terrible royal blue color. I'm going to sew a custom neck piece to go around my neck and up my jaw line out of the rest of that extra lab coat material. I'll look up that hose dying thread. Mine are too blue and need work. I'm holding out for a special jet pack that will knock everyone's socks off. That will be a little while. Thanks to JD for awesome armor, (shoulders are a little to curved but that's okay ), Reinone for awesome boots, my mother in law for takin in my jumpsuit, adding extra sleeves, tolerating my pickiness, my wife for tolerating my messes, and spending too much money, and of course to all my friends here at TDH, and the time they took along the way to answer my questions and help me along. I hope I can be of help to others who are new and be counted as able to share my wisdom and experience. Cheers! :cheers

Cool it is good job. :cheers

Awesome! Looks really good and as mentioned before, the finish on the metal looks great.

Just gotta put something to hide your neck and you are good to go. Great work. Patience pays off.

I'm going to have to stop looking at any Jango threads. Every time I look at one, I see something like this that makes me want to start another costume before I finish my Boba. Great job.

Stick to it xaoslord, it will come. Believe me.