Some of you have already taken a peek at this one, but I figured I'd throw it back up here so everyone can see how flexible an MLC pack can be. It's been sitting around like this for awhile now, since I'm too busy to work on it.

This rocket pack began life as an ordinary MLC1 kit I purchased a few years ago. At this point, the pack walks the line between just a modified pack and the effort level of a scratchbuild. All in all, I rebuilt the entire bottom, modified the center spine, the [white] side boxes and their bottom angles, replaced the nozzles with BM nozzles, replaced the tubes, and scratchbuilt the top and bottom caps. Replacing the tubes also allowed me to rework the tube seems so they were'nt as blended into the tubes as the MLC. The new tubes also included a rework of the areas around the nozzle axles. Rebuilding the bottom allowed me to lengthen the tube shrouds by 3/4" and make the correct setting for the bottom tube caps -- which really made this project worth it for me! This solved the stumpyness I was never satisfied with on the MLC. I also ripped apart the old "piano keys" and built a new set from acrylic on a new plastic strip.

I also scratchbuilt the castellated center crown from acrylic and totally reworked the union between the shoulder hump and the upper center-barrel. In doing so, I ripped out the old castellated crown, sent a new missile tube through the center, and rebuilt the MLC grappling rocket. The only MLC parts that are exposed now on the rocket are the nose cone, the fin body, and the bottom-most tube section. Plus, the rocket is down to three fins vice four. The missile can pull out of the lower launcher body -- as seen on the prepro pack, but the lower body is permanently affixed into the pack. 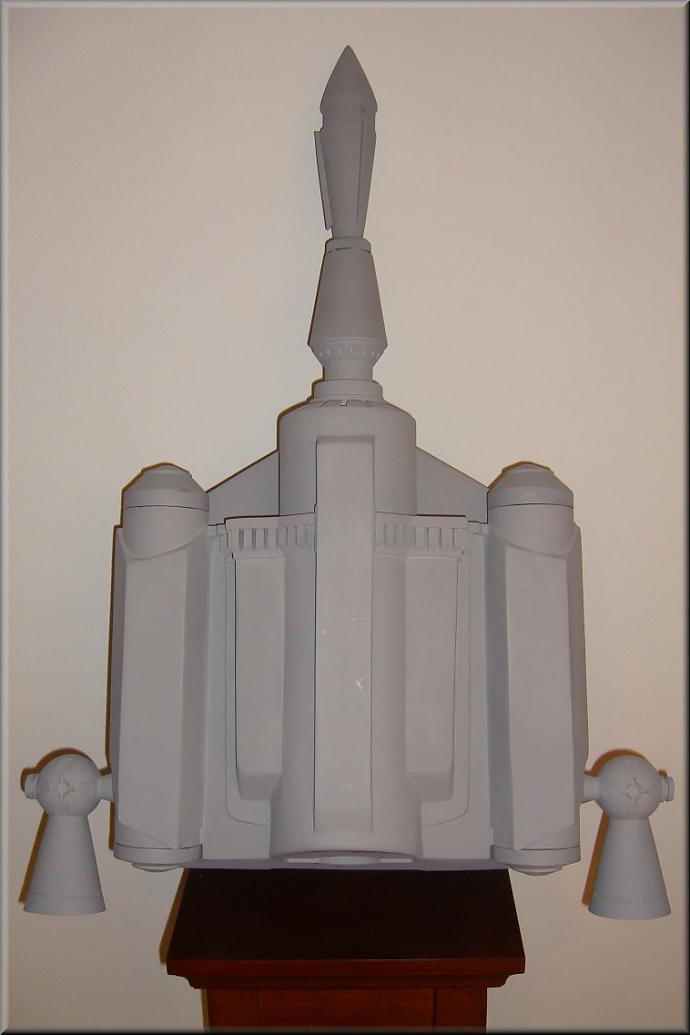 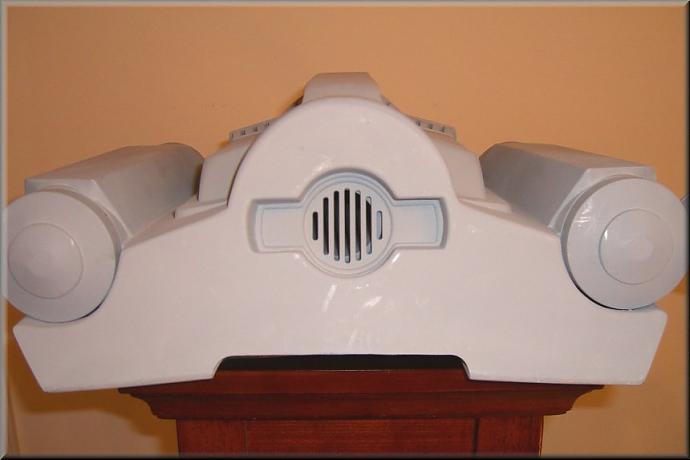 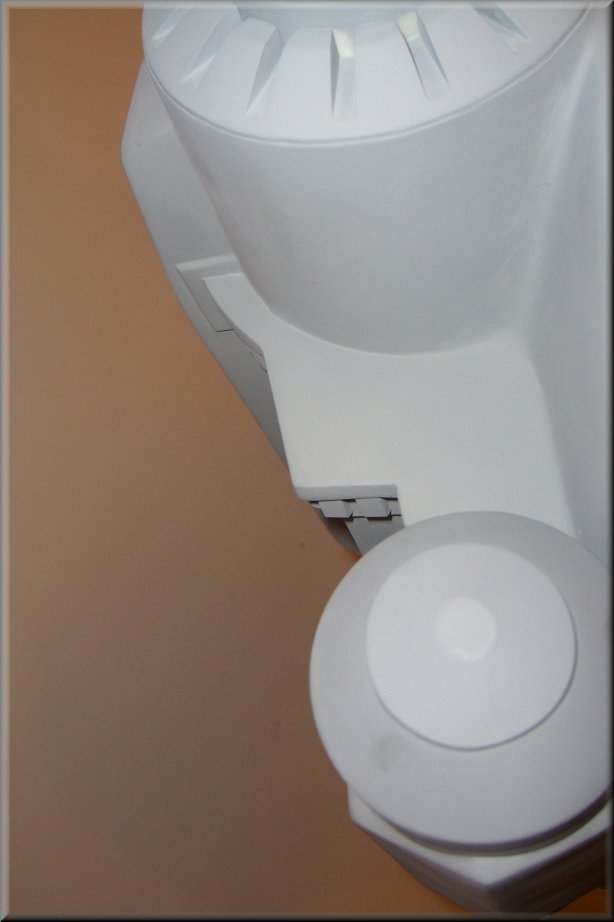 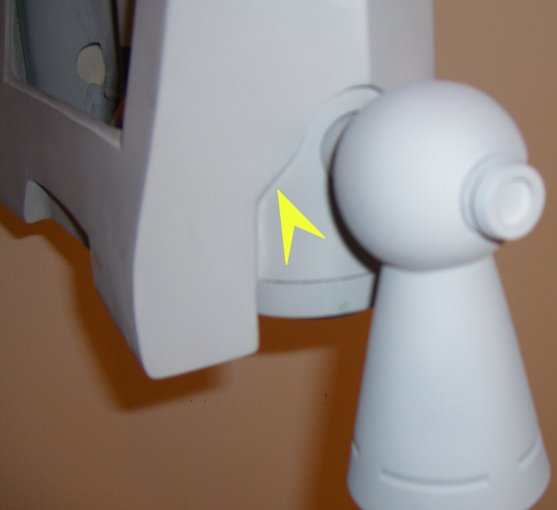 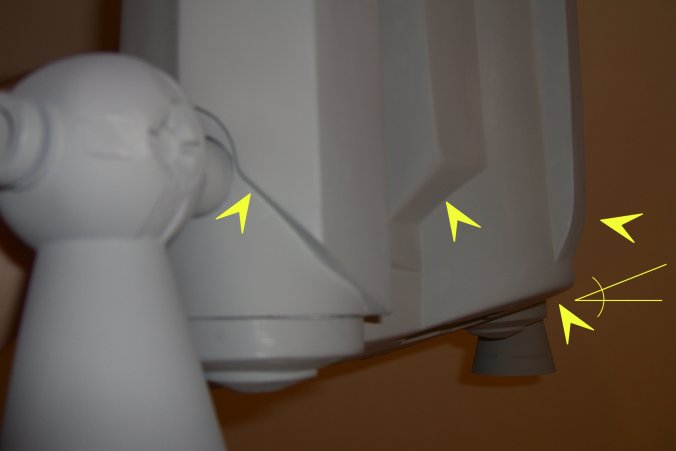 Wow ... very nice work. Did the total weight of it change significantly after ya finished the modifications?
S

Here's a light comparison of the old (as it arrived) and the improved. The little hands point to all the areas I attacked.

Yea, the weight increased a bit, although I have not weighed it. Accuracy is my pursuit, but "trooping" in it is not. 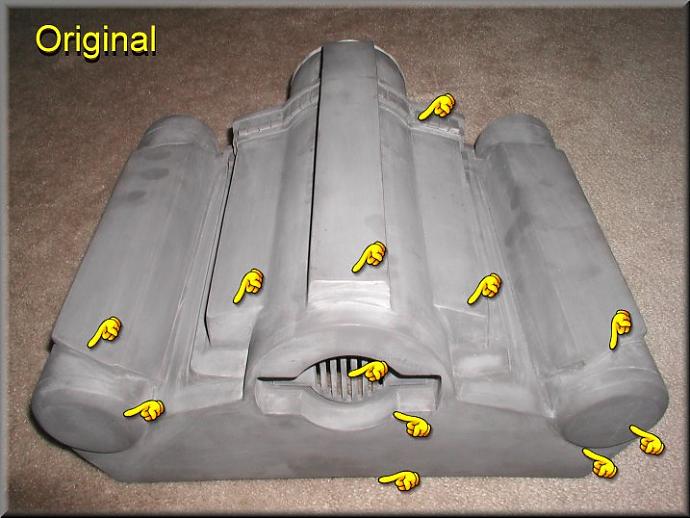 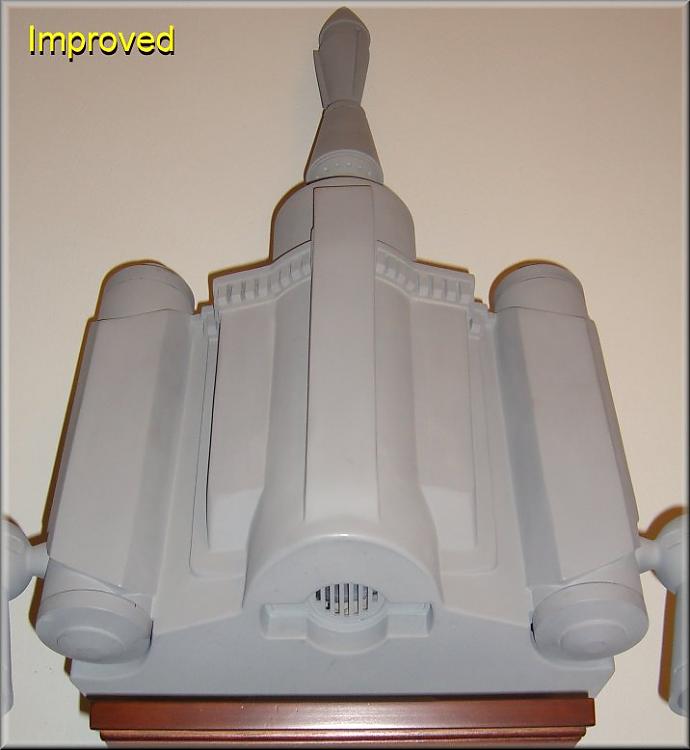 Ok, here are some of those overlooked progress shots....

Rebuilding the bottom, replacing the "tubes," and generally ripping the thing apart. The new angled bottom (i.e. not flat anymore) is a sheet of acrylic...and a new opportunity to rebuild the vent hole in a better place. 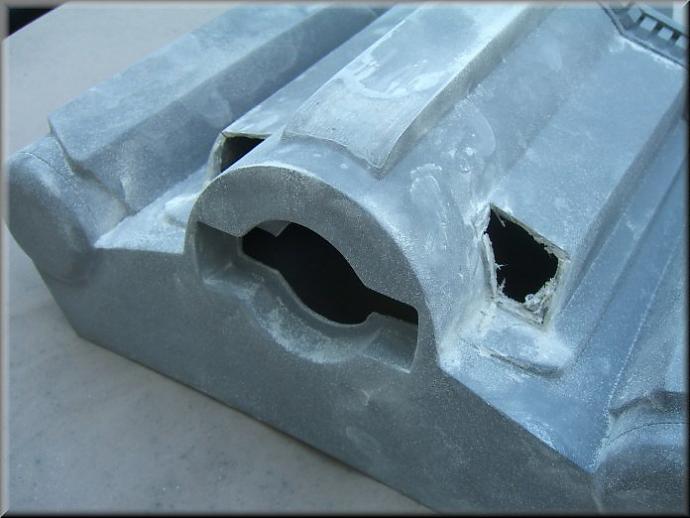 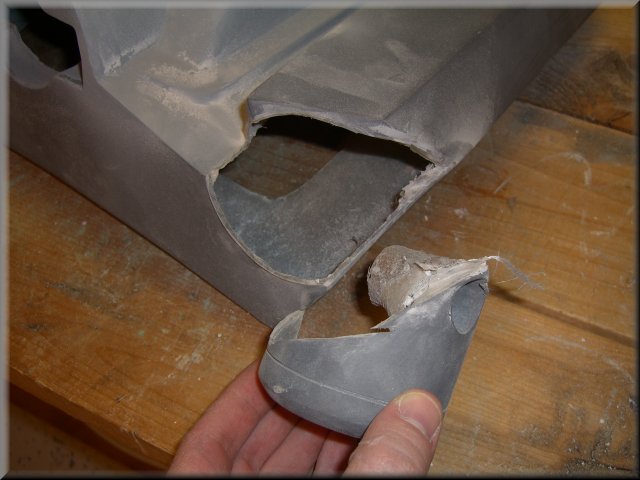 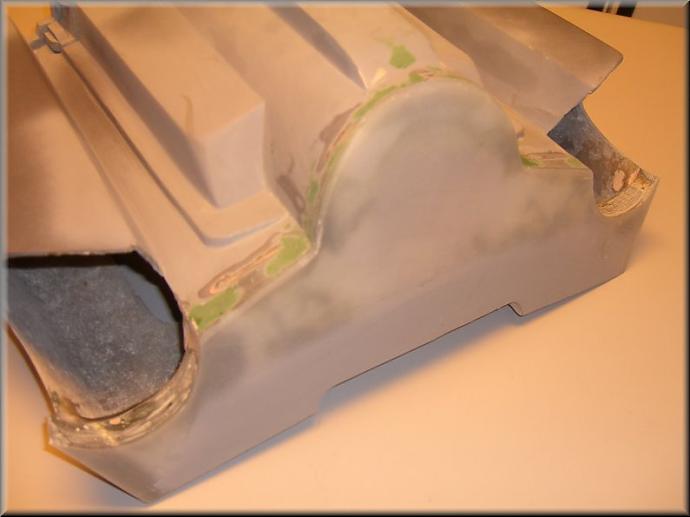 SingleSeat said:
Ok, here are some of those overlooked progress shots....

Rebuilding the bottom, replacing the "tubes," and generally ripping the thing apart. The new angled bottom (i.e. not flat anymore) is a sheet of acrylic...and a new opportunity to rebuild the vent hole in a better place.
Click to expand...

Oh man. I dont know how you do it. I would be scared as all get out to even think about doing that. It looks amazing! Great work!
S

Thanks dudes. Those tubes are new polycarbonate tubing. But here's where I really felt the big difference came in -- the new bottom allowed the added length so that I could escape the stubbiness of original design. More length is what I needed!

...plus a rebuilt rocket! I cut the original MLC rocket in half. Reworked the upper half by chopping off the cone (save for later), removing the mid section, and replacing it with a custom-cut pvc section and acrylic "fins." Then came my plans to permanently affix the bottom portion to the pack. The knurled ring was replaced by a sacrificed vitamin bottle lid of the right diameter. The bottom part of the MLC rocket is still inside all that styrene and putty. 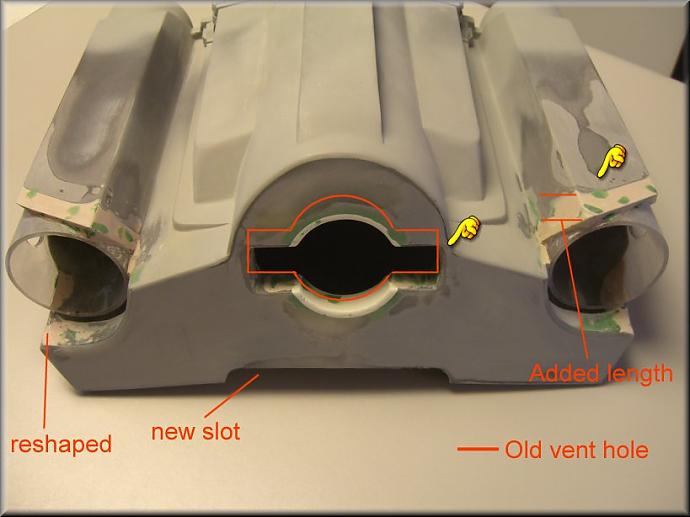 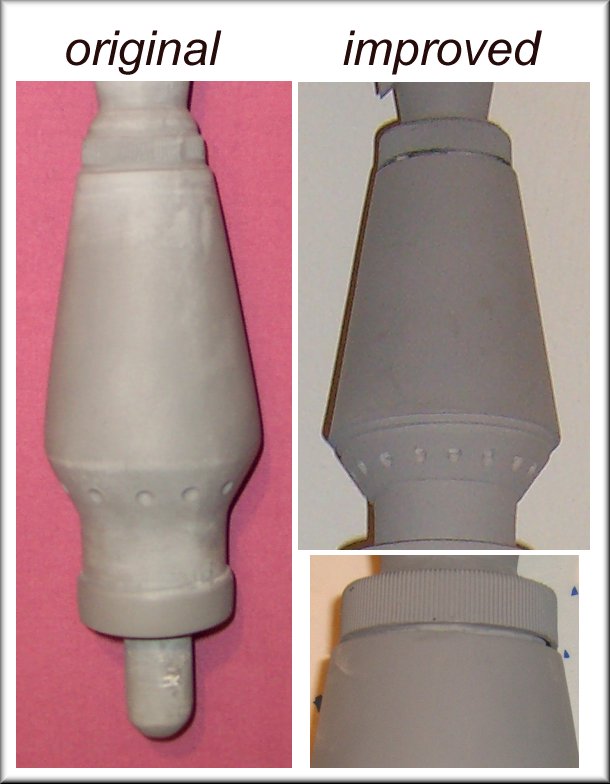 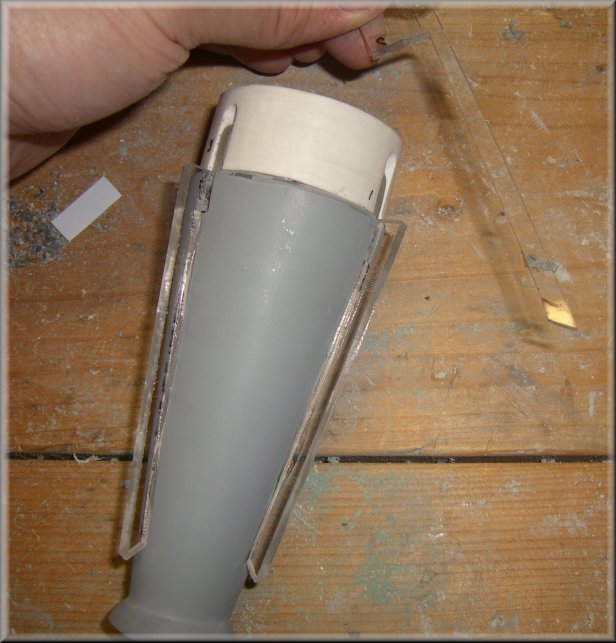 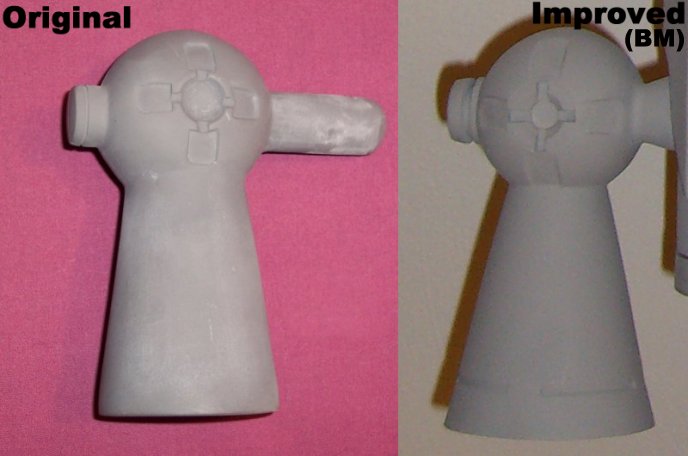 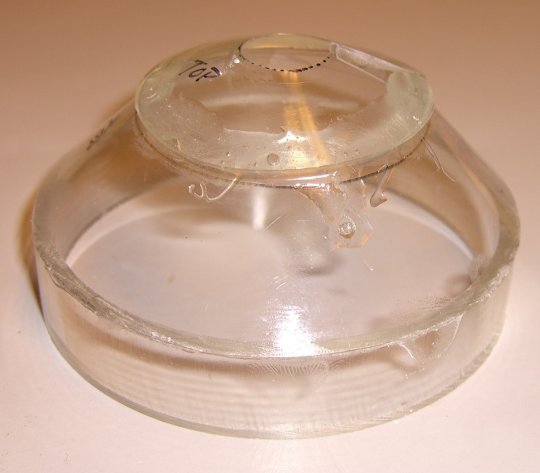 ...just thought I'd throw a few more pics in.

Here I reworked the union between the shoulder and the upper center barrel so that it is blended better and at a better angle.

Then there is the castellated crown piece that was cut from a piece of solid acrylic.

The "piano keys" also got ripped off, a new strip laid down, and new acrylic keys cut to fit. This picture also shows part of the original union between the upper center barrel and the shoulder before I modified it. 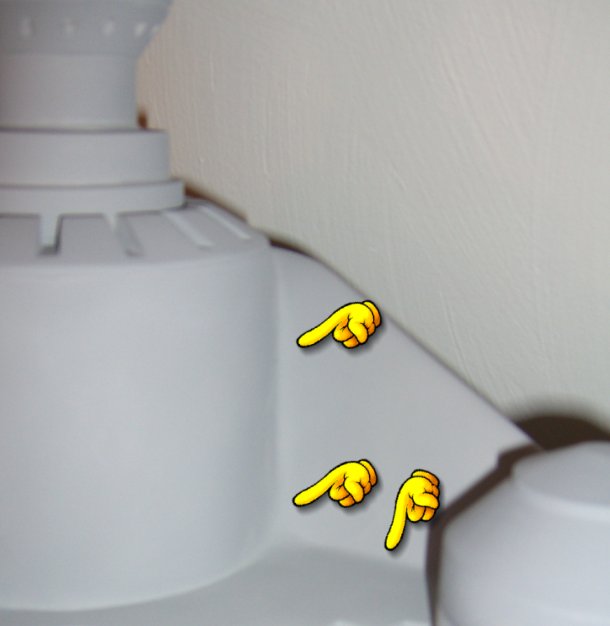 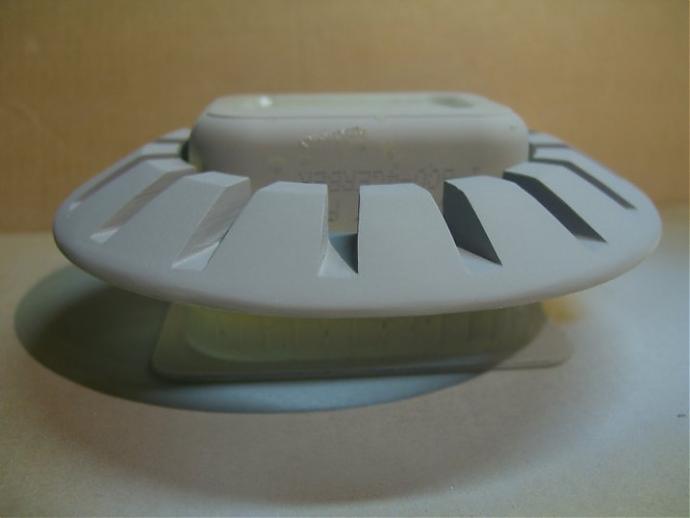 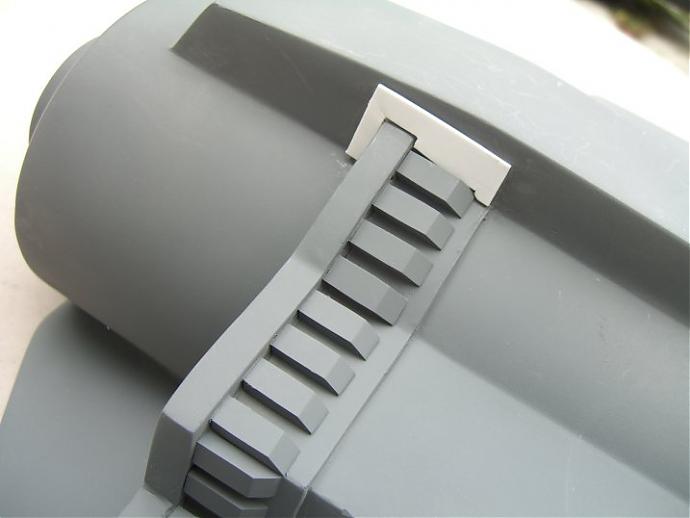 nice work on the piano keys!

You are doing great work on that pack man. Keep it up, and keep us posted! :cheers

Wow, that's a lot of changes!!! Great work, though. Looking forward to the final thing.
S

This thread is officially back from the dead lol:, well, at least because this rocket pack is done! The bad news is that I'll have to say goodbye to it and send it off to eBayland in a few days cry.

It's painted AoSW style as seen in Return of the Jedi, and I tried to hit the screen-look rather than the 30-year-old pack look; i.e. more than just the smoother weathering, many of the features such as the thrusters and the beacon are meant to match what was on screen in 1983.

If you didn't take notes from the beginning of this thread, the bottom was completely replaced to achieve the angled bottom, and the vent rebuilt from scratch incorporating a laser-cut vent. The tank tubes were also replaced and the caps on both ends were rebuilt from scratch. The castellated rocket base is a solid acrylic piece machined into shape. The rocket itself is basically all new and is removable while the base is also rebuilt and is permanent, just like the real pack. The beacon is lit as well.

Painted with Floquil enamels, the weathering was 80% layered and then a combination of topical and scratch treatments finished it. Extensive physical weathering comes courtesy of some dental tools, knives, and files. As usual, the pics don't show all the details, so to see it in person is very different. Aluminum pieces from PSberetta :cheers. Hat's off to Lee's color research !

All-in-all, I'm pretty satisfied with how the MLC came off of the workbench torture-table. 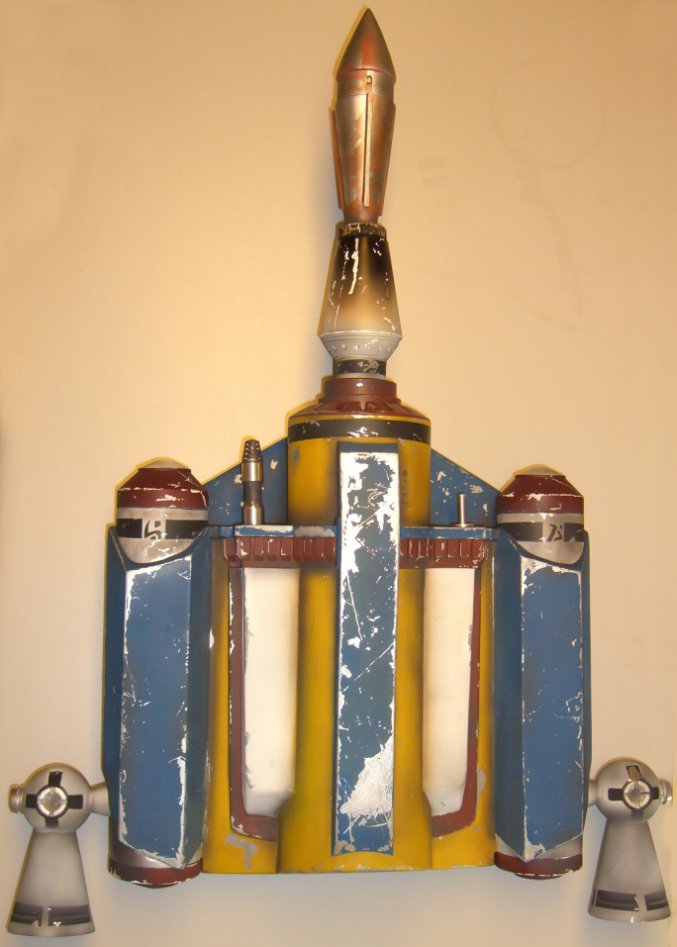 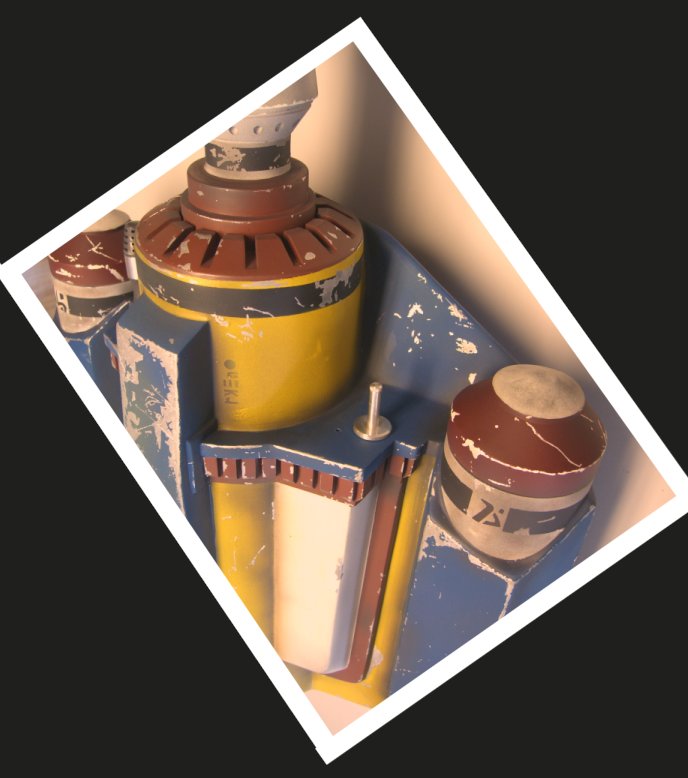 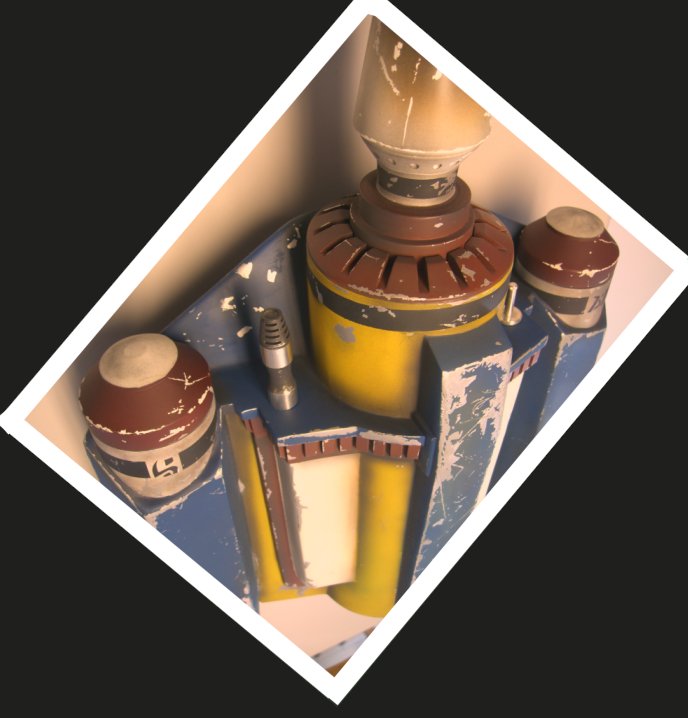 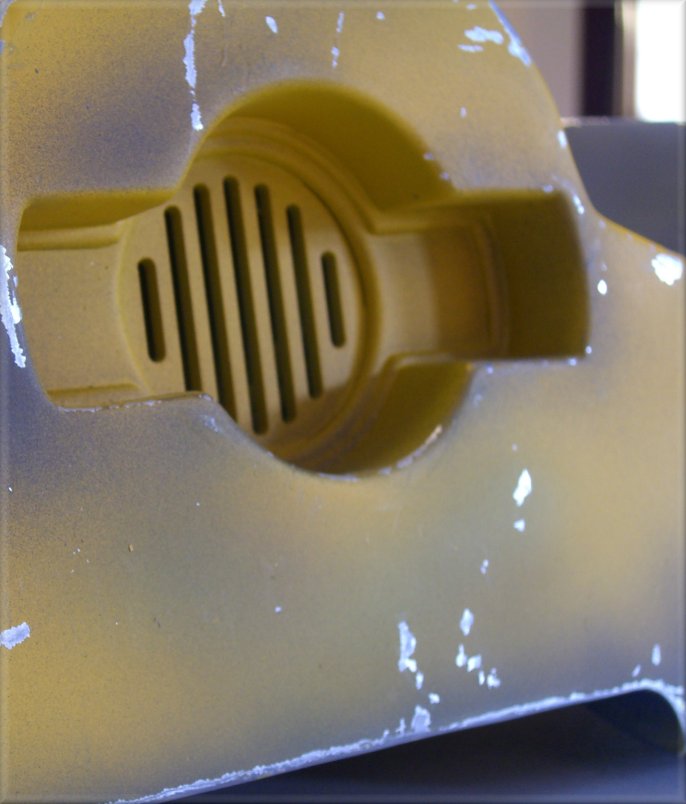 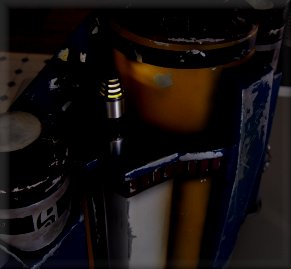 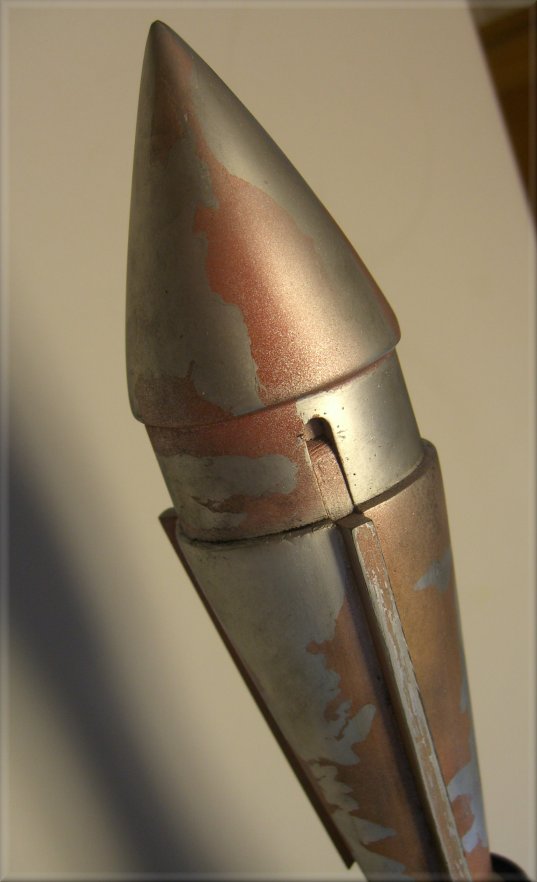 Now thats a killer ending to a to a progress thread.
AWESOME job.
So, I take it the "other" pack will be your keeper ?

lol: haha, we'll see. You never know with Fett. But ESB is always calling me.

Holy #$&* Chris, nice work on the rebuild! Love it! Shame it's goin to the big auction in the sky after all that work.

Yea, I thought I'd be keeping it, but you know the drill...bigger bills need to be paid. Not sure when I'll replace this pack, but I will someday. Heck, who am I kidding, I like 'em both!