Hi TDHers!
I was looking through some reference photos a while ago while I was painting my new RS ears, and I happened to look at a couple of the hi-res scans posted a while back. One of them is almost a dead match angle-wise to one of the AOSW pics from the reference gallery.

I started looking at the pics, and besides the lack of all those little black scuffs between the dent and kill stripes, I noticed there were several "signature" scratches that weren't there on the hi-res stills. I would assume those were incurred during handling after filming.

I'm thinking of doing another helmet at some point (yes. . . I'm addicted ) and wanted to make it as it appeared during filming. Has anyone else noticed any other "missing" scratches or damage? 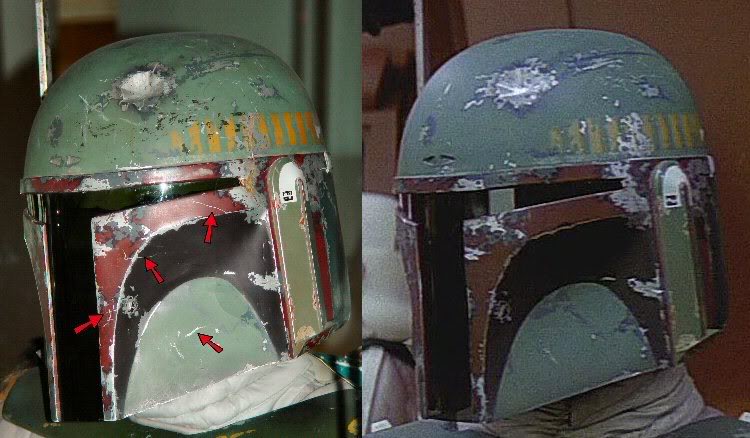 It's also missing the long scratch that runs along the upper edge of the lower left cheek. Right by the little rectangle indention.
Last edited by a moderator: Feb 27, 2007
G

The helmet was pretty abused as seen in MOM

AFFoD,
Yeah, I already mentioned the lack of black scuffs.
Forgot about the longish one on the cheek though!
G

SO you mean I spent money on Floquil model paints for black scuffs that were never on the real helmet? Heheheh.

GCNgamer128 said:
The helmet was pretty abused as seen in MOM
Click to expand...


Don't you mean AOSW? The two cities I saw MOM in were both using ROTJ helmets.

Besides the fact that the high res pics don't show any of that black splatter all across the left side of the helmet below the forehead indent, there also appears to be some more silver horizontal scratches up there near the middle of the forehead on the exhibit helmet.

On the corner of the visor area where it was damaged it looks different in the original. Plus it is of course missing the crack. It also wouldn't have the blue marker on the back.
G

Hmm...you know what, if you really study the scratches that are the same between the 2, you will notice small differences here and there. Almost seems like it is not the same helmet. Or is this a fact, that everyone already knows

Oh, they are 100% the same helmet. Like it’s been mentioned, the costume in general was not handled/stored and cared for the way it should have been. Also remember that the ESB helmet was used as a stunt in ROTJ, it got kicked around and roughed up.
Last edited by a moderator: Aug 2, 2017

Its so weird because there almost seems to be scratches on the screenshot that aren't on the AOSW. Also the part above and below where your left eye would be just look different, more than just wear and tear. It could all just be in the photography though. Its cool to see the 2 side by side though.

When Lee painted the MR one he based it off the movie version and not the museum version. Ditto for Jango Fett Jr when he did his.
W

GCNgamer128 said:
SO you mean I spent money on Floquil model paints for black scuffs that were never on the real helmet? Heheheh.
Click to expand...


Thats the problem with all these ref pics everyone uses to paint by. Everyone is recreating the "time" damage which is not accurate.

What helmet was used for the SE scenes, it clearly has more damage than the ESB bucket? If the AOSW was used, then us SE guys would be accurate.
W

mrgr8ness said:
If the AOSW was used, then us SE guys would be accurate.
Click to expand...

mrgr8ness said:
Hmm...you know what, if you really study the scratches that are the same between the 2, you will notice small differences here and there. Almost seems like it is not the same helmet. Or is this a fact, that everyone already knows
Click to expand...

Is it possible that there was more than one ESB helmet used? You know, like hero and stunt helmets, thus accounting for the subtle differences in the shapes of the scratches from scene to scene. I seem to remember seeing a still of several ESB buckets sitting on a table with some other props. But it could have just been a Star Wars induced hallucination!

Going to borrow one of Jez' pictures for a sec...
I have always wondered if this is the ESB stlye stunt helmet seen in ROTJ.

Is is intresting to note that some of the damage on the ESB hero which was not there at the time of ESB, has been replicated or also occured naturally on this helmet. (Such as the paint peel on the right side cheek and the crack on the same side near the stripes, and the odd "crease" on the rangefinder side cheek.)

Appreciate all the responses, guys!
Would anyone happen to have any good rear or right side views of the "on screen" ESB helmet?
That first pic I posted is a great comparison shot of the front/left angles, but I'm curious if anyone has other photos to compare.