I have seen a lot of tutorials for most everything, except side pouches. I have been trying to build a lot of my suit as opposed to buying the parts. One is to save money, and second is purely for the satisfaction. I have built a few things using WOF's templates and have been very happy with the results. Let's face it guys, for the do it yourselfers, his templates are the holy grail for us. This weekend I decided to give the side pouches a try. I built one up first, then decided to do a tutorial for the second one. I figure there are folks out there that may need a little help. I may not be using the templates exactly as Alan planned, but they came out pretty good. Ok, are you ready? Let's build ourselves some pouches-


First of all, we need to download and print out WOF's template. It will print out in multiple pages, and we need to tape them together. In the end, we should have 2 pieces that look like this- 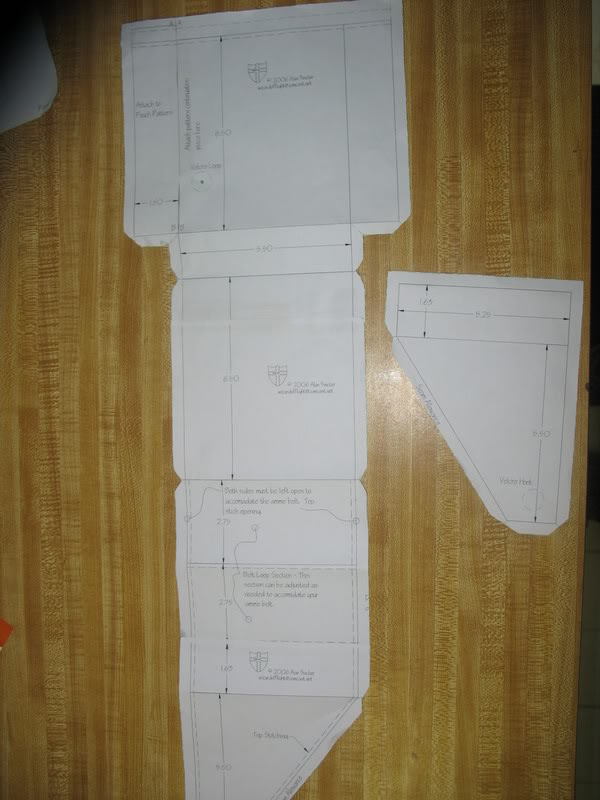 Next, lets go ahead and use them to cut out 2 pieces of fabric. They should hopefully look just like the paper- 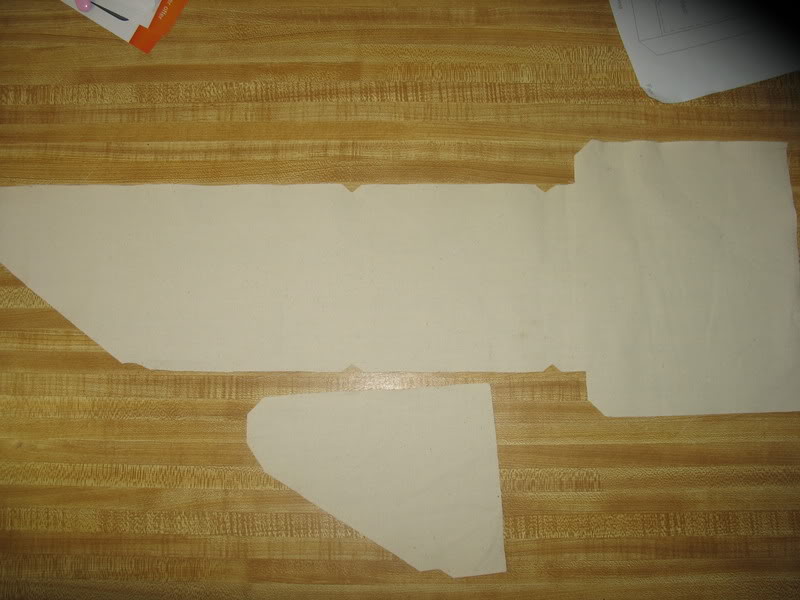 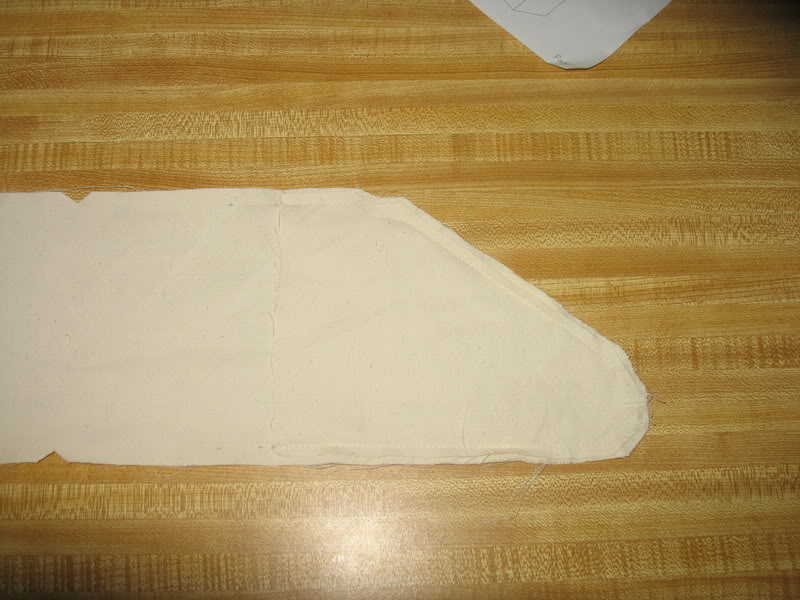 Your flap is inside out right now. Lets turn it right side out- 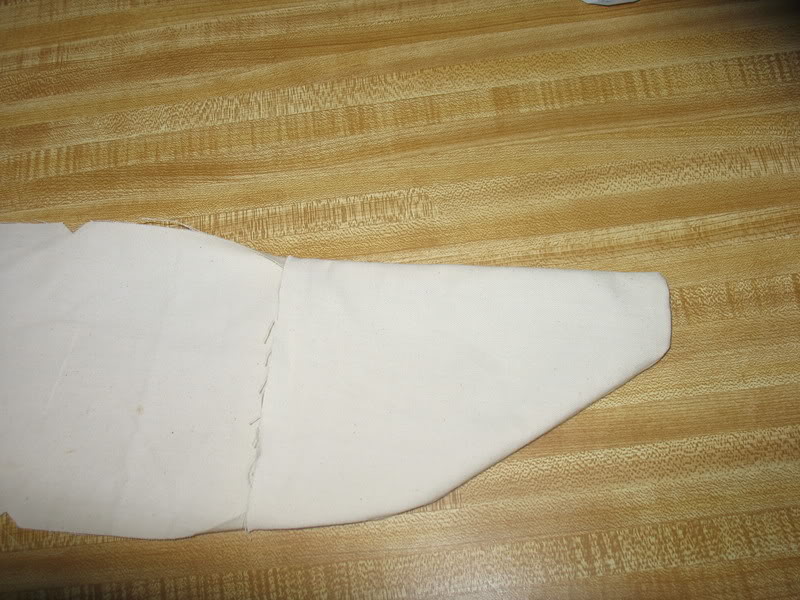 Now I go to the other end, and make the double fold exactly as shown on the template- 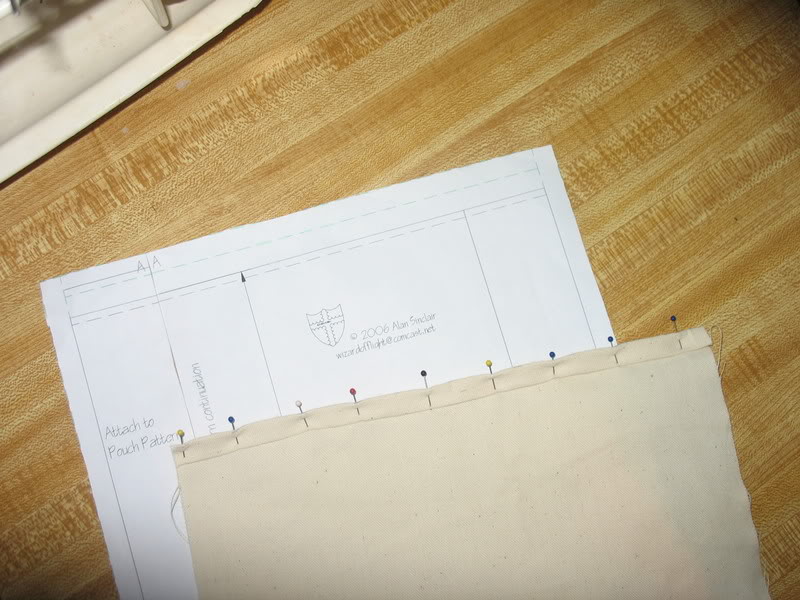 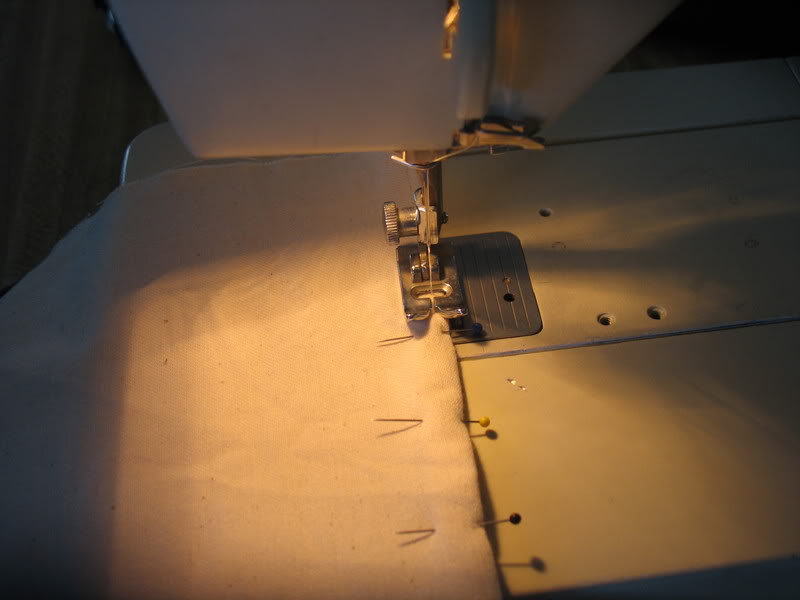 Ok I won't lie, the next part is a little tricky. Its the belt loop section. I am not looping mine, I am velcroing and attaching to the backside of my ammo belt. If you are do the loop, then you will be on your own a little for this step. You need to fold your fabric so the front and back of the loop section line up. Basically what I did, was lie the fabric on the template, and make marks to guide me where to make the fold. Go ahead and make the fold, then tuck the sides in at 3/8in. It should look like this- 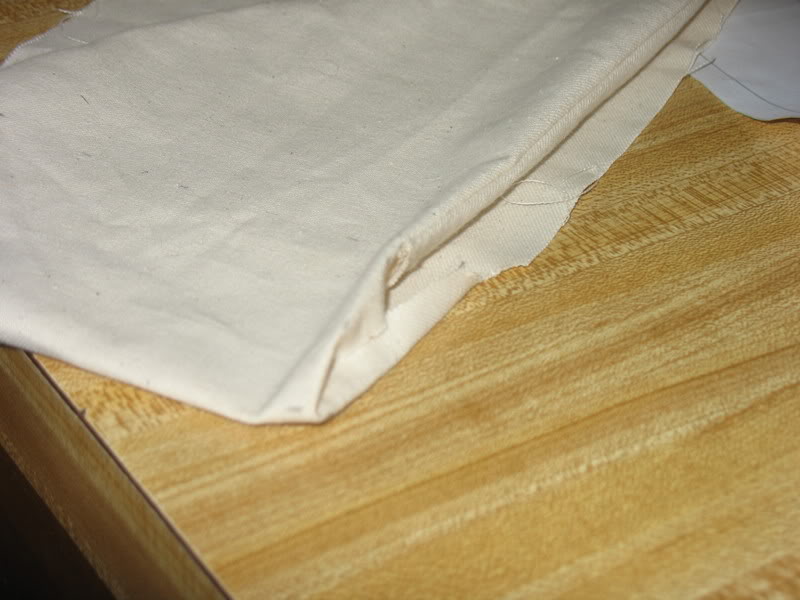 Nows a good time to measure down 2.75in down from the fold as the template indicates, and make some pencil marks. This will guide you as you sew the bottom of the loop section.

Now, lets sew the loop section. Remember to tuck the sides in at 3/8in as I have done. See where my needle is starting? Its at the 2.75in mark as I mentioned- 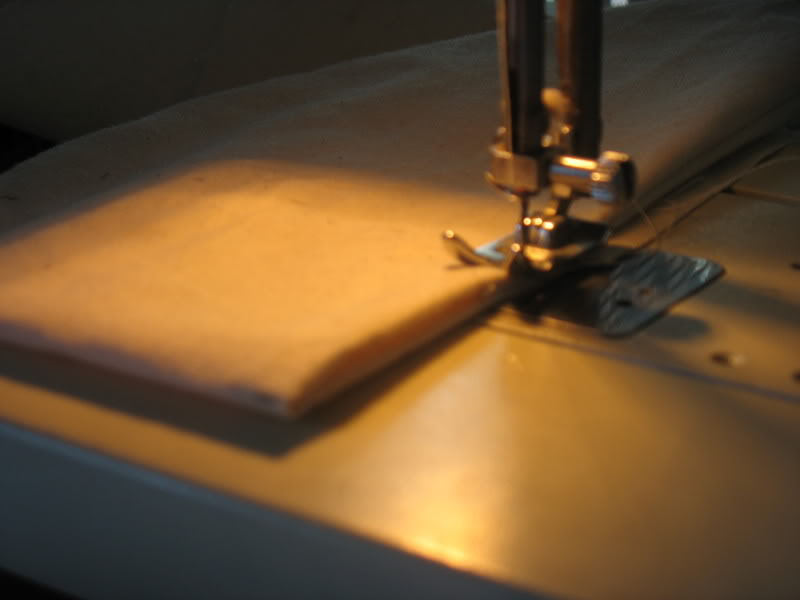 So pretty much just sew the rectangle for the loop section. Remember I am doing this solid without loops for my version- 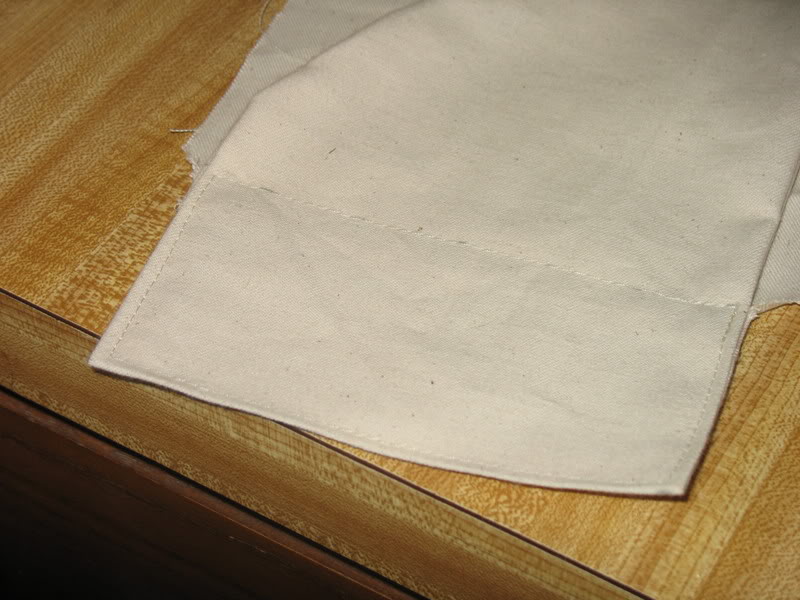 How are we doing so far? Here is the point that we take a break and grab a beer. Before we do, let's take a look at where we are. Hopefully we have something that looks like this- 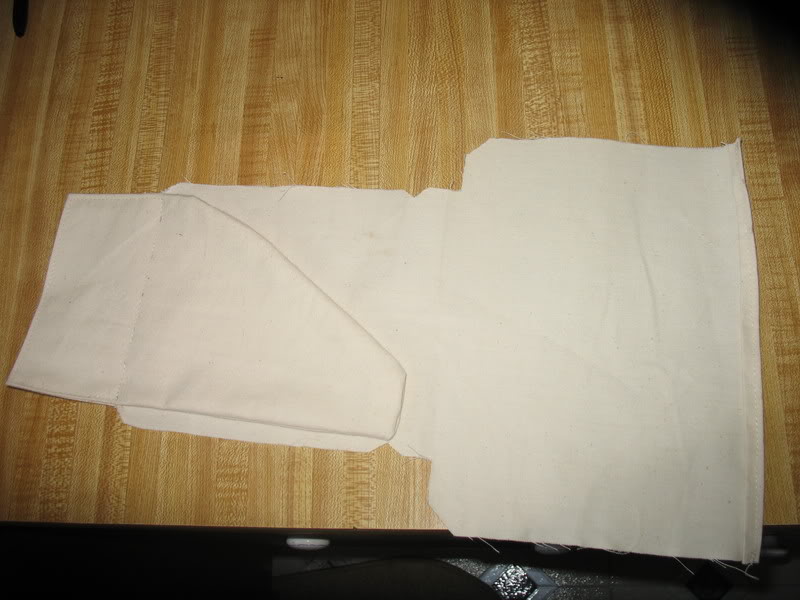 Ah, that was refreshing. Ok, lets get back to it. We are getting ready to sew the pouch itself. Before we do, now is a good time to sew a piece of velcro on the pouch section. Use the template to guide you to where it should go. I actually took the template and pooked a hole in the center of where the velcro should go, then laid it on the fabric and poked the pencil through the hole to make a mark on the fabric. Use whatever method you want. Just make sure you sew it on the right side of the pouch. Use your flap to help determine that- 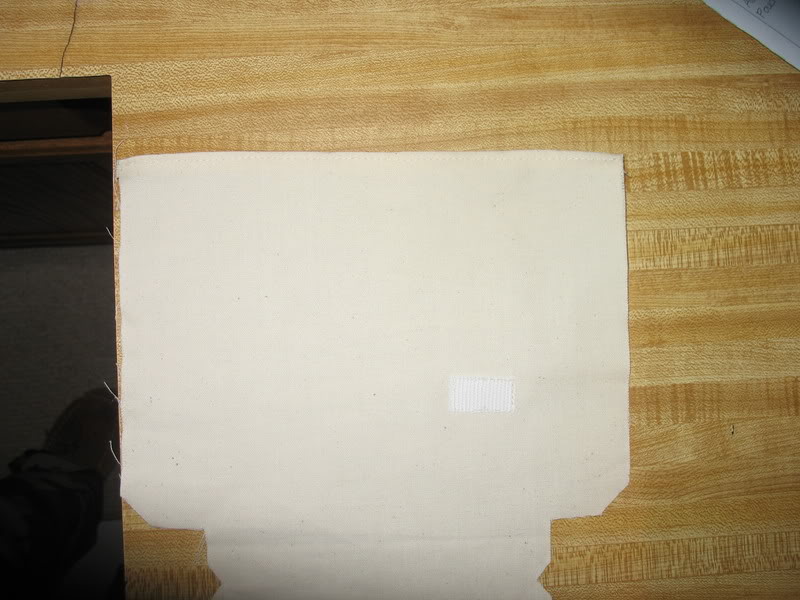 Again this part is a little tricky but take your time and you can do it. Fold the fabric over like this. Notice, I made some 3/8in marks to guide me while sewing- 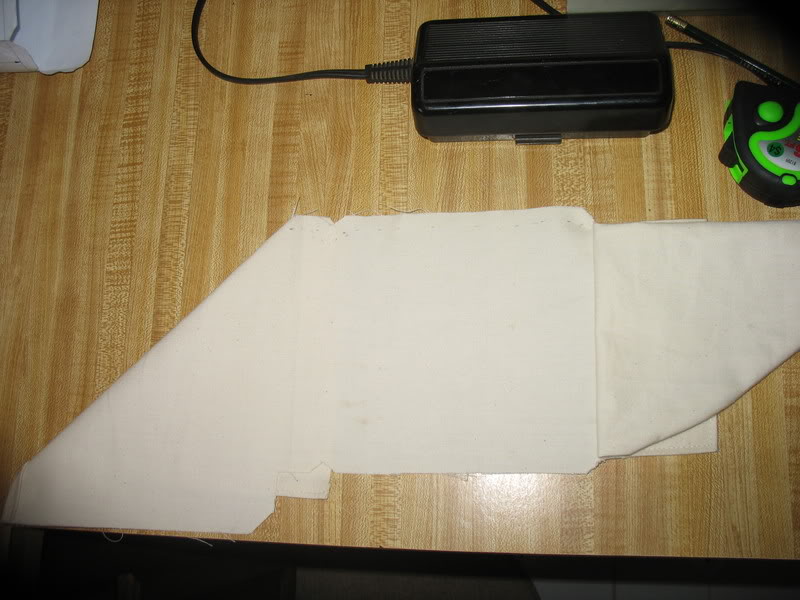 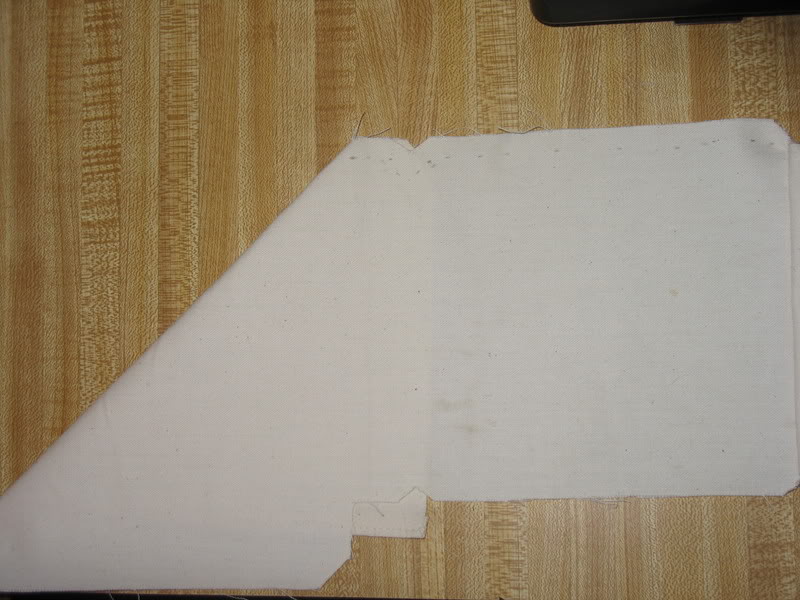 You will need to sew what will be the bottom part of the pouch first(how it is folded).- 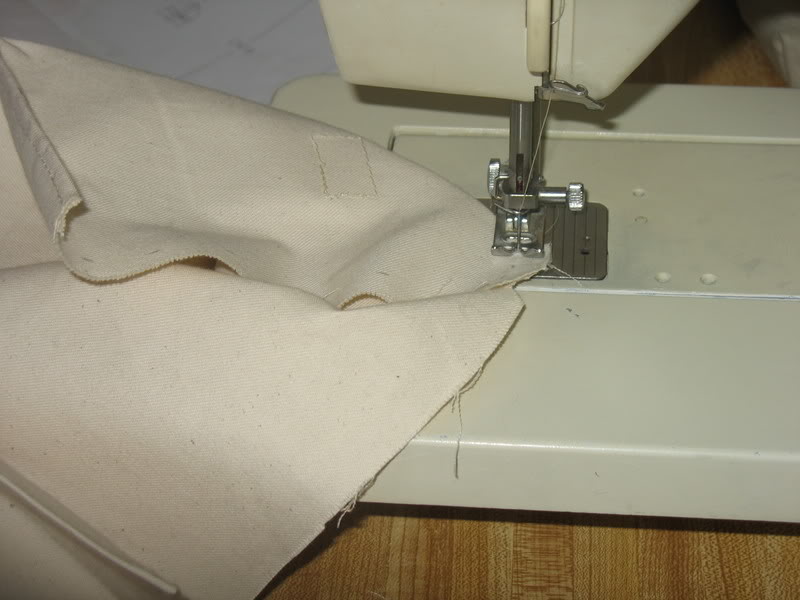 Then you will need to kind of stop, then line up the pouch sides and sew. This is probably the trickiest part, because its not a nice straight line. Just be patient and take your time. In the end it should look like this- 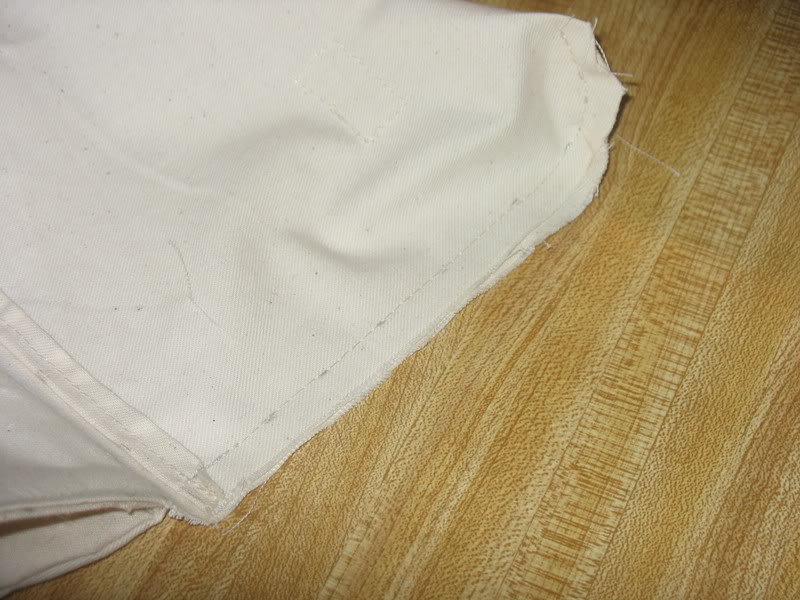 Now, I took an extra step here just because I like neatness. I tucked in the frayed sides and make another stitch to make it look neat. It doesn't matter much because this is the inside of the pouch- 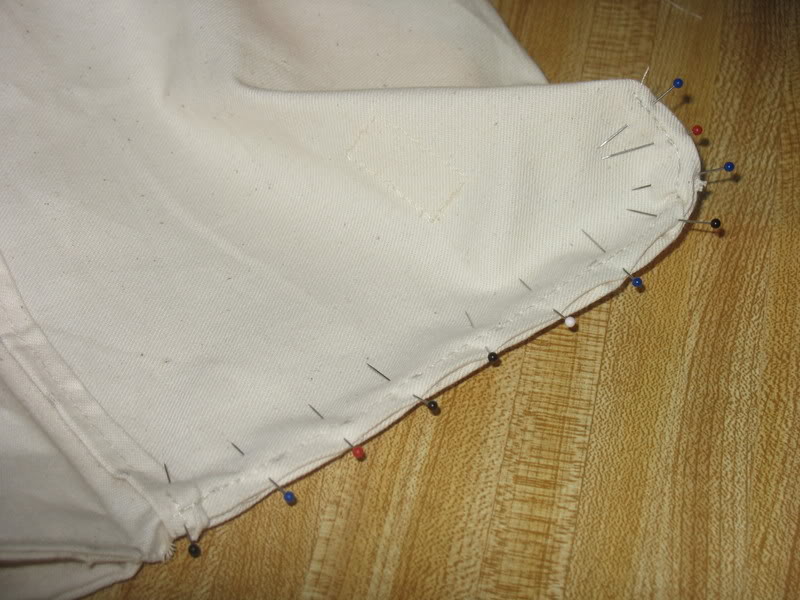 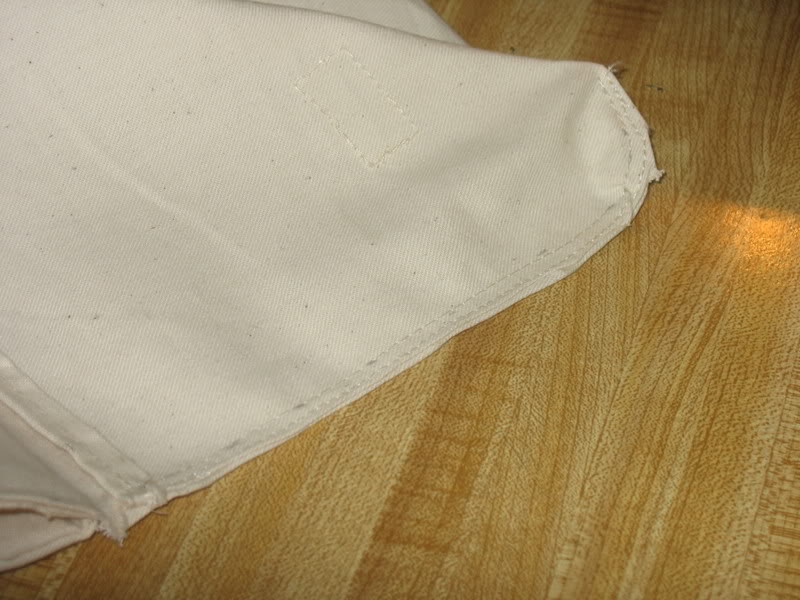 Now just repeat this for the other side. Once that is done. Lets take a look at where we are. Hey, its starting to look like a pouch now- 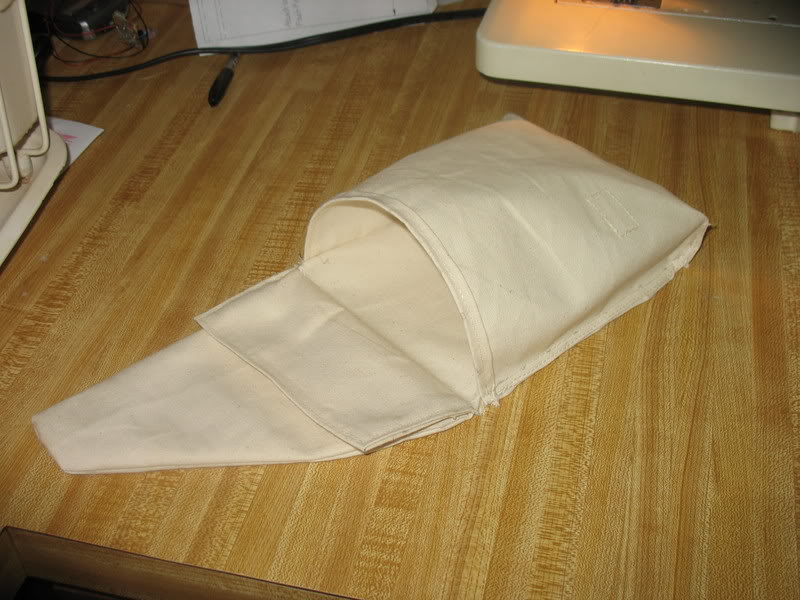 Let's go ahead and turn it rightside out. Hey, we are almost there:cheers- 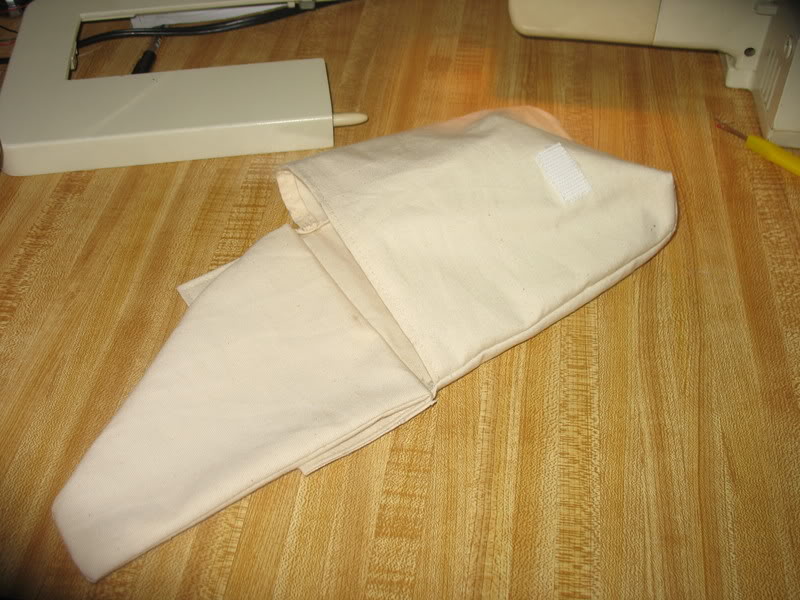 Next, I just make a stitch around the flap border- 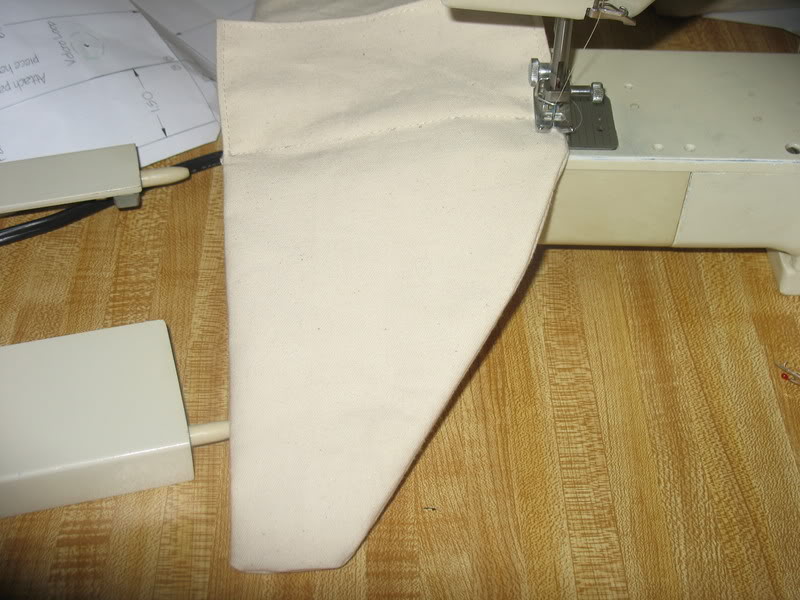 Just use the measurement provided on the template or eyeball it. It doesn't need to be intricate- 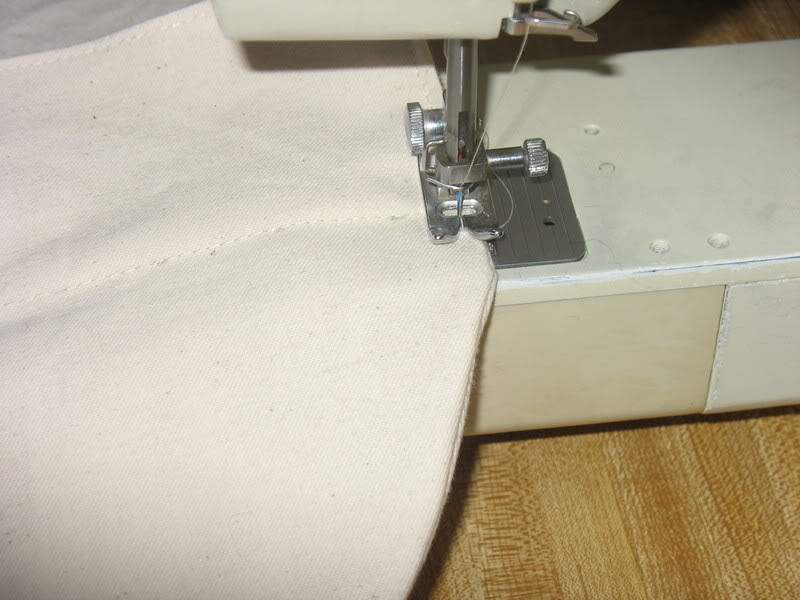 There a border around the flap- 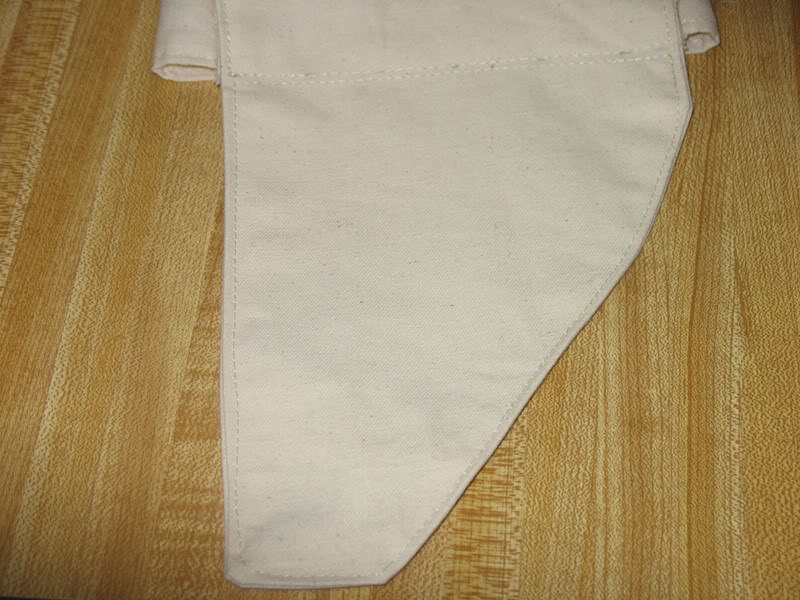 Finally, let's sew a piece of velcro on the flap- 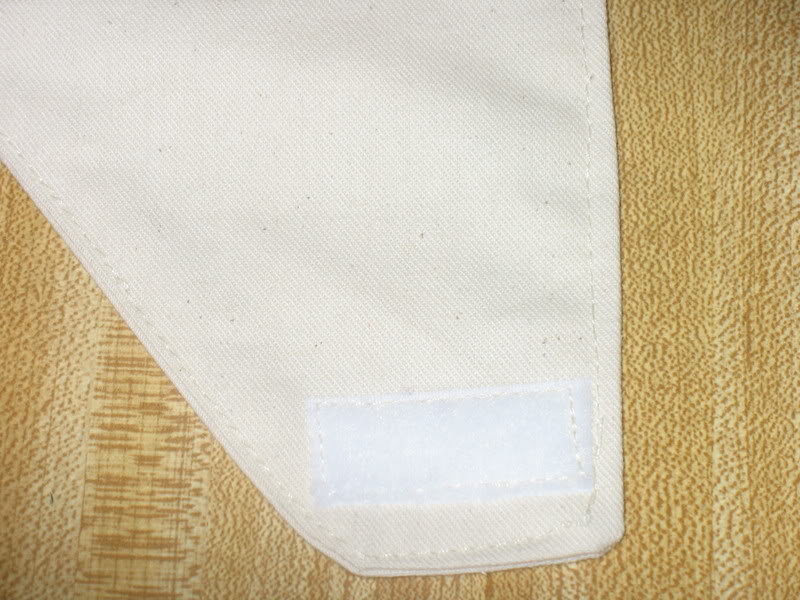 Let's take another break, and have 2 beers this time. We need to repeat the entire process for the other pouch. Then...... 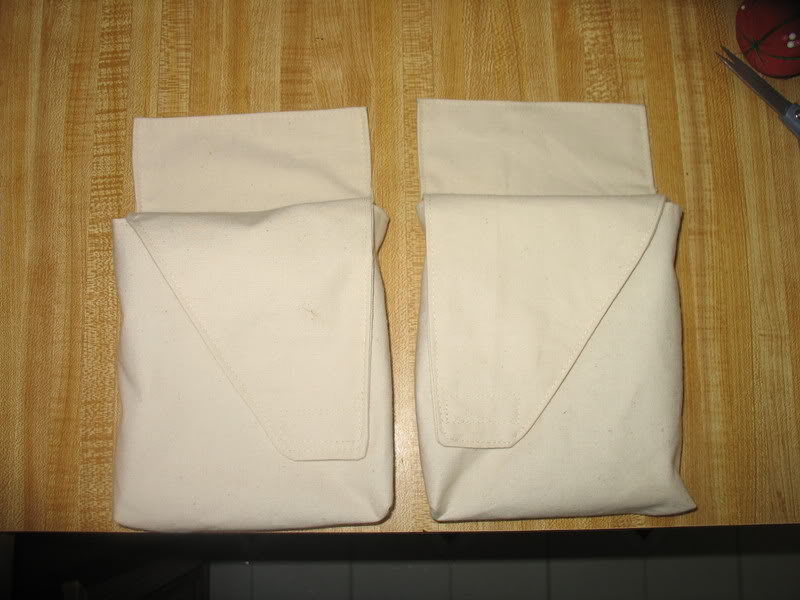 One last step. I sewed on my velcro to hook up to my ammo belt. Then weathered them up a bit, and installed some foam blocks. The last thing I will do, is sew the flap to the sides of the pouch at the top. I agree with Alan, that this appears to have been done on the screen used pouches- 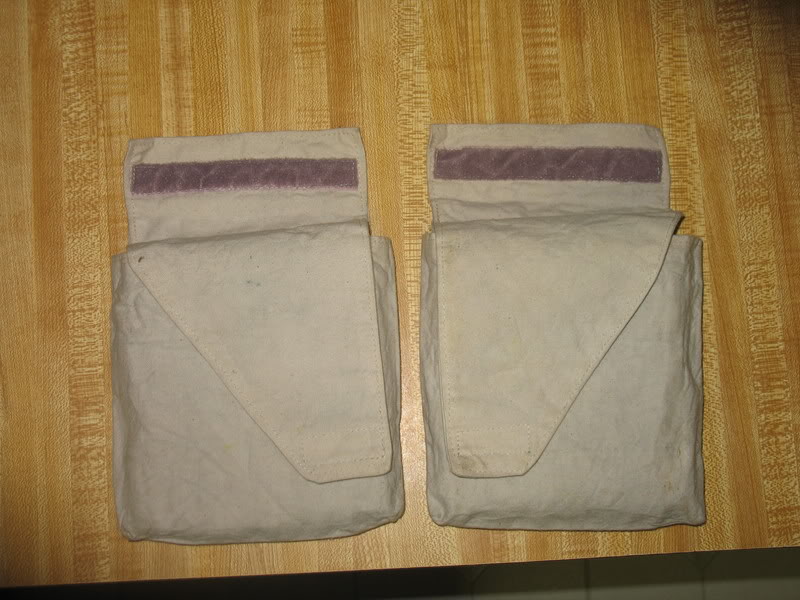 We are done!!:cheers We have built ourselves a pretty accurate set of side pouches. Hope this helps the masses. Enjoy
Last edited by a moderator: Apr 29, 2008

Does anyone know where I can find the template. I have been searching but cannot seem to find it.
M

Thanks guys. I updated the post with a pic of the pouches weathered up a bit. Now they look like they should. Well, still want to stitch the top sides of the pouch to the flap.

Great job!! Just how I envissioned it to be done!

Do have anything you would like to see changed in the patterns to make easier to assemble?

Thank you for the tutorial. I spend so mu time on working on the templates I can never find time to build my own stuff. I have to live vicariously through you guys.

This tutorial is very timely since I will be making my own side pouches in a few weeks. Any suggestions on type/weight of fabric?

Alan, I thought the templates were pretty good as is. It took me a minute or two to tape it together and figure out how to fold it and such. Really wasn't hard at all. I have enough left over material, that I will probably do another set just for fun. May do it with the loops this time, and add that step to the tutorial.

I basically walked around the fabric store looking for a lightweight canvas material in a cream or tan color. What I picked up is some sort of cotton blend, as they didn't have canvas in the color I wanted. Another material is duck cloth, that is pretty similar to canvas. I also have some white muslin that I think would look pretty good, and it dyes very nice. I may use it to make some ESB version pouches sometime.

are you looking from work? your office might be blocking photobucket.
F

Awesome tutorial. Thank you so much for showing how you did the whole process. I can't imagine buying these pouches. Funny thing, I learned to sew just for this reason, costume making.
R

Excellent - thanks. Now to get the wife to show me how to use her sewing machine.

Great work on this tutorial, still holds up. I just finished the two belt pouches and thigh pouches for my son's mando build. Thanks for this. The beer breaks were greatly appreciated.
S

Thank you! I know it's been a while since you posted this still great reference that's being used to this day.