I was approached in Dec of 2020 and asked if I'd build the latest Boba Fett variant, "Boba Fresh", with his poppin' colors.

For eye candy, here is the kit in it's present state: 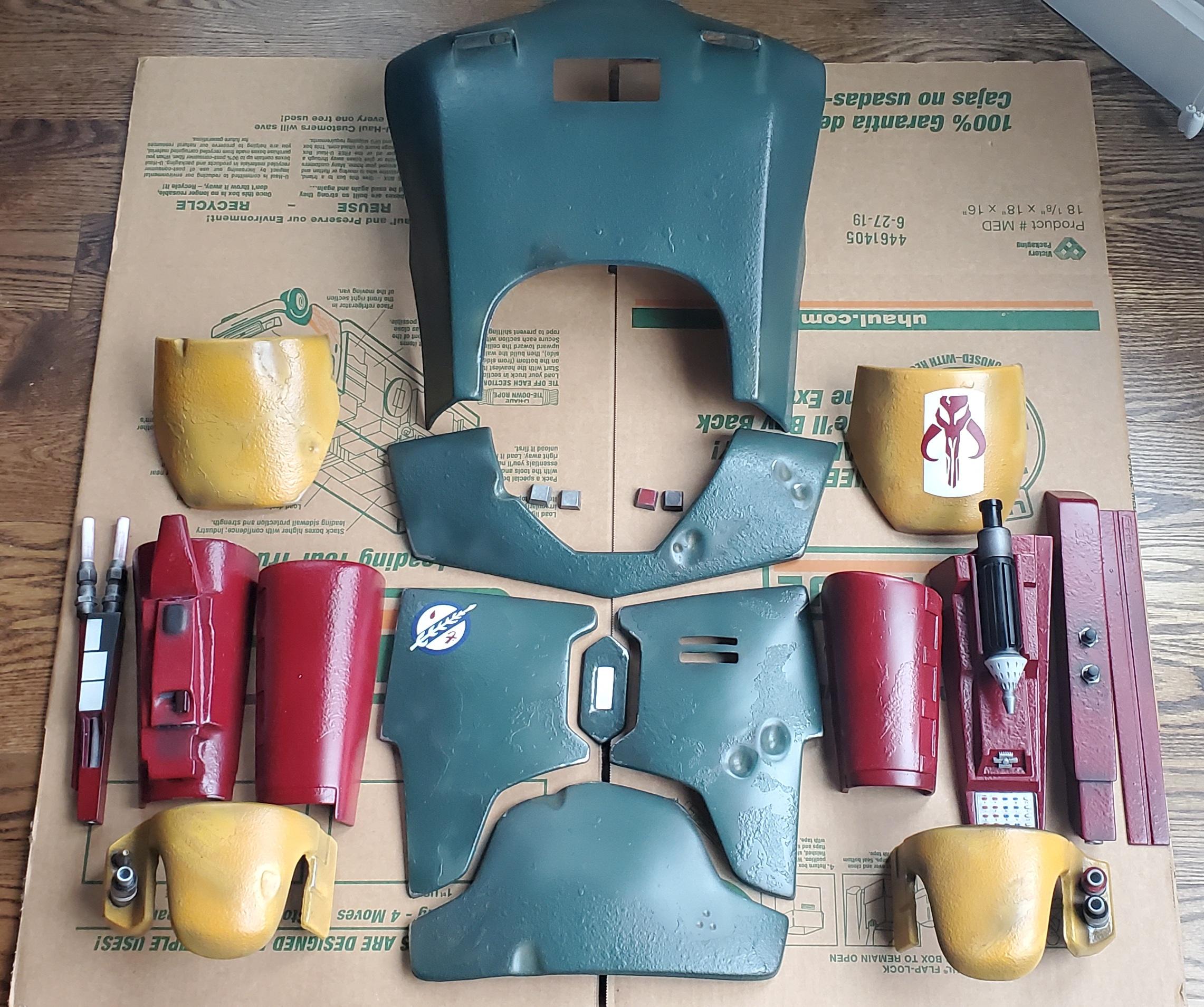 With very few references to follow besides what's on screen, I've decided to base the damage and repaint on several factors:
On screen repaint, Cobb Vanth (Ch 1), and RotJ Hero.

The client opted against a jetpack for now, but may get one later -- he's basing it off "The Believer" episode, where Fett isn't wearing a jetpack. I've notified the client that costume requirements for club approval hasn't been written and the costume/maker community is still trying to get things sorted out, so I would build the costume based on my knowledge and available kits. He was good on that. Fan designed for a like-minded individual. (Follow along at your own risk). He's getting soft parts made by another vendor and has sourced his rope belt and boots according to the community research.

The item's I've collected for my part of the build include:
Wasted Fett RotJ abs armor (chest, shoulders, collar, back, knees) -- not using kidney or cod
Man of War RotJ resin gauntlets
BobaFetthasCollege Debt lineage RotJ recast from an original...?
Note: I'm confused at it's origin, but you fine folks may know more. Based on the guy's work in the past, I've decided to give this helmet a go, and work on a helmet I'd never seen before.
Chest LED's by Fettronics
Chest and Shoulder Decals by DeLucks Designs
Paints were sourced locally at a hardware store and hobby shop. 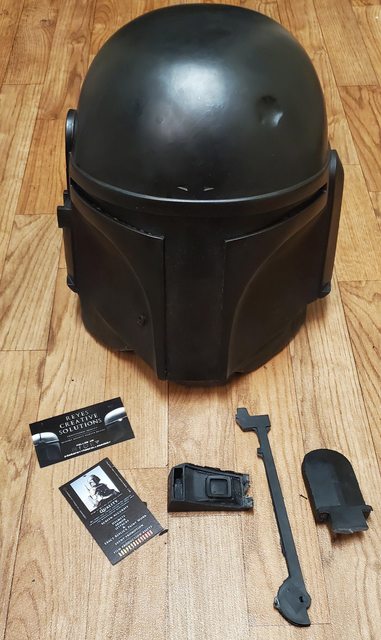 With these items in hand I started the build and paint. Before I get into the process photos, here's the paint breakdown on the armor. The helmet will be its own thing. 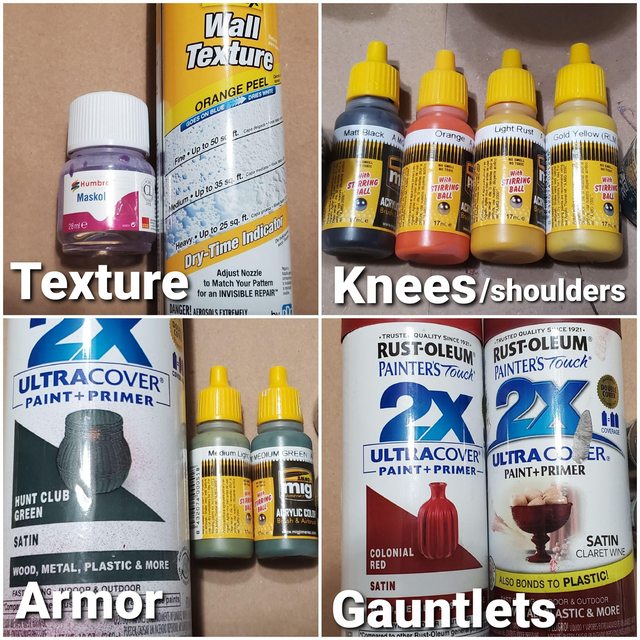 Here's a test spritz of the wall texture and paint. This can let dry, then spray more to build up. I applied at different angles on the gear to prevent a regular spray pattern. 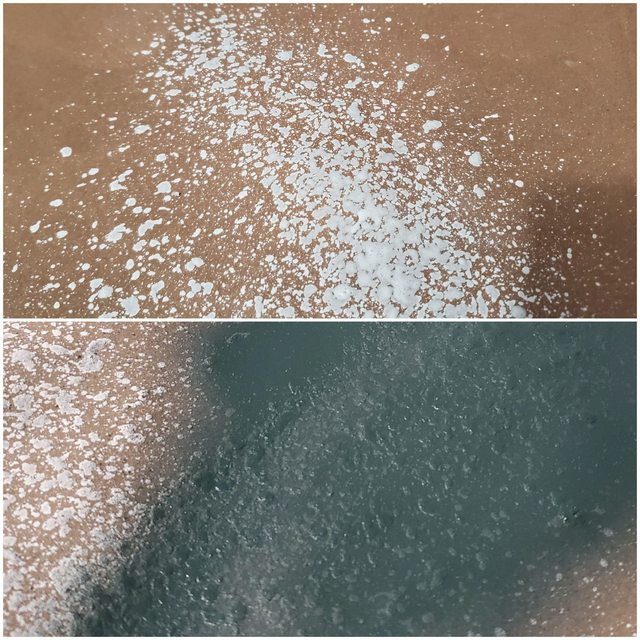 Hopped on the belt sander and trimmed everything to the 3mm(ish) thickness. 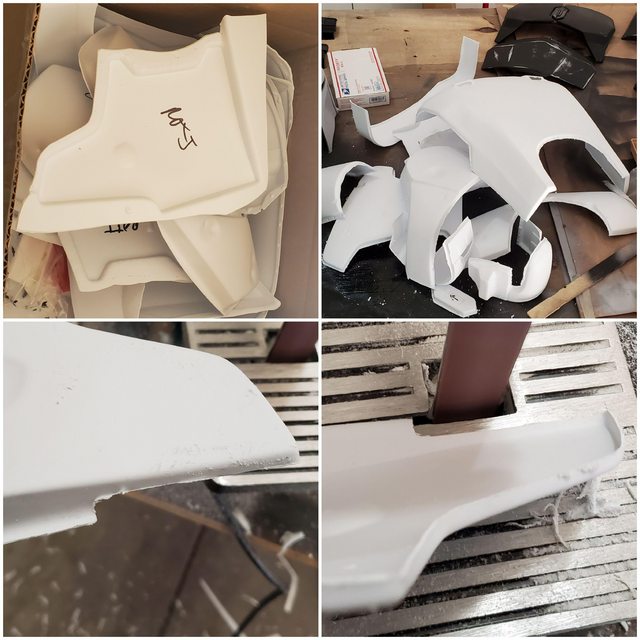 Based on these images of Boba's repaint and Cobbs existing damage, I've decided to use Cobb as a reference for masking since we get a full episode of the armor in sunlight. Here you can see the patterns more or less match. So I went with it. It makes sense that a repaint would follow the reference since I couldn't find any good details from the repainted kit in the episodes. 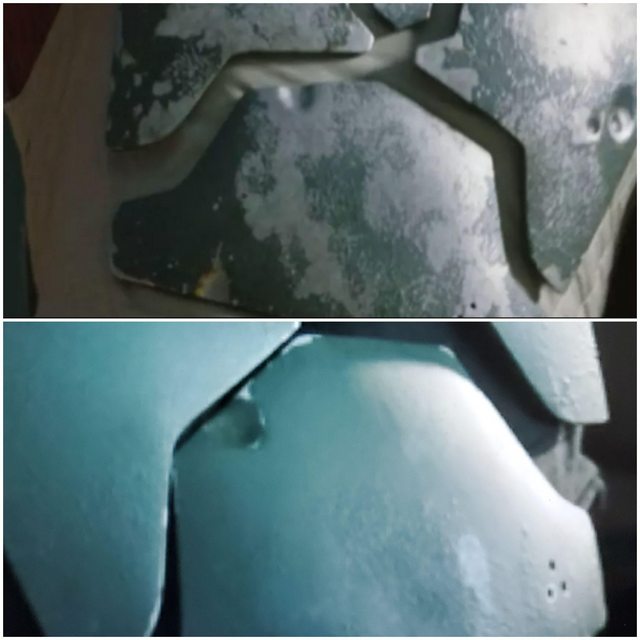 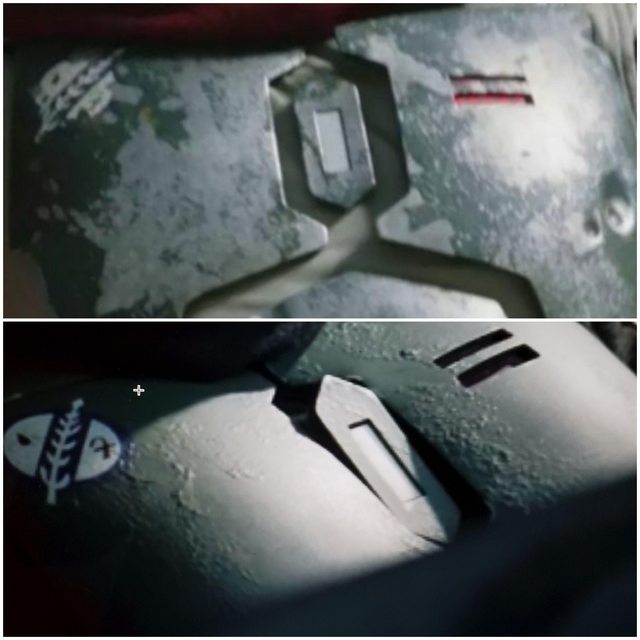 I used Humbrol masking fluid and the wall texture to sort out damage placement. Where there is bare metal, I masked. Where there was existing paint, I let the texture do its thing. 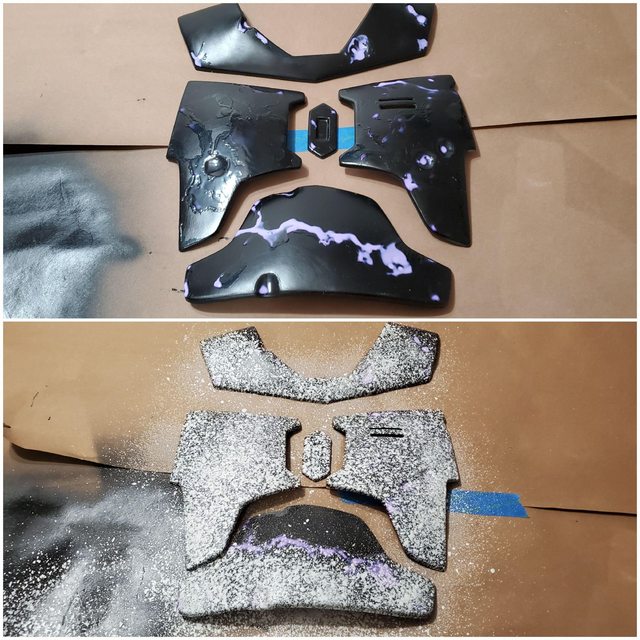 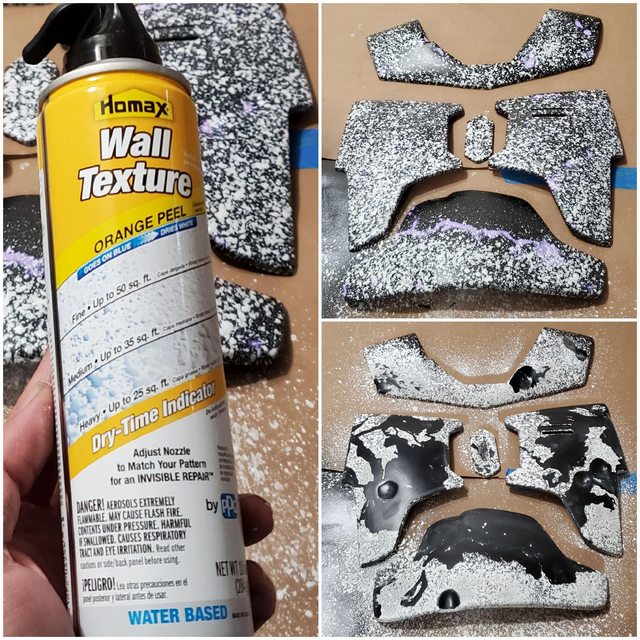 I'll share this because I didn't pay enough attention and assumed an RotJ armor set will fit the bill, but there is a dent in the right chest that is not there on this new set. Here's my paint coat for lighting check, and then the fix applied after I sanded everything off. (ESB doesn't have this dent and I've found that ESB has visual influences on the new costume as well) 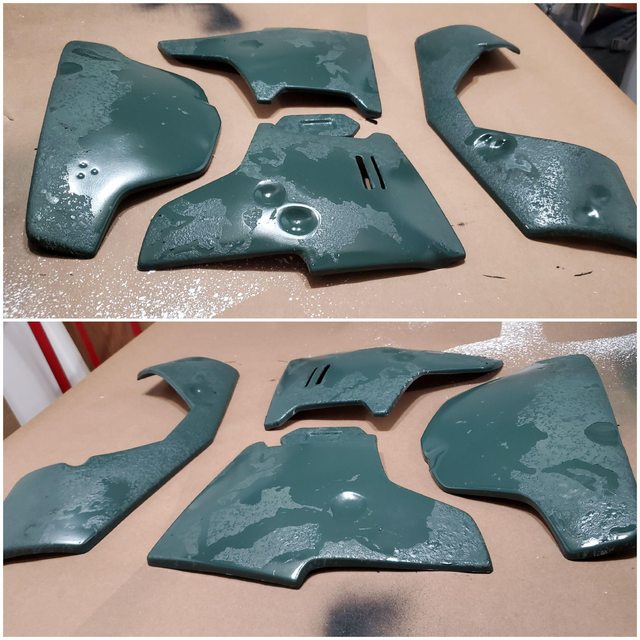 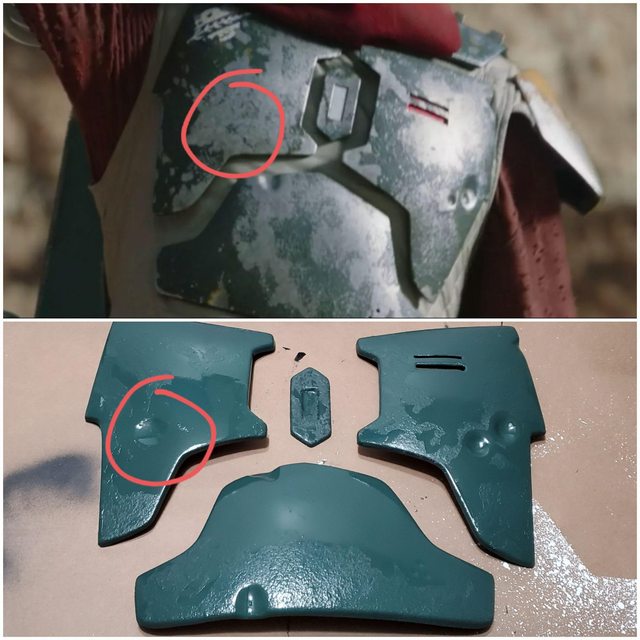 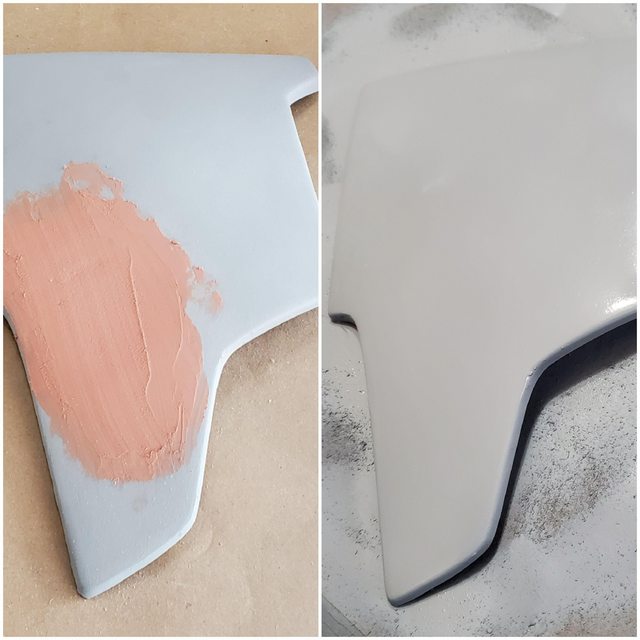 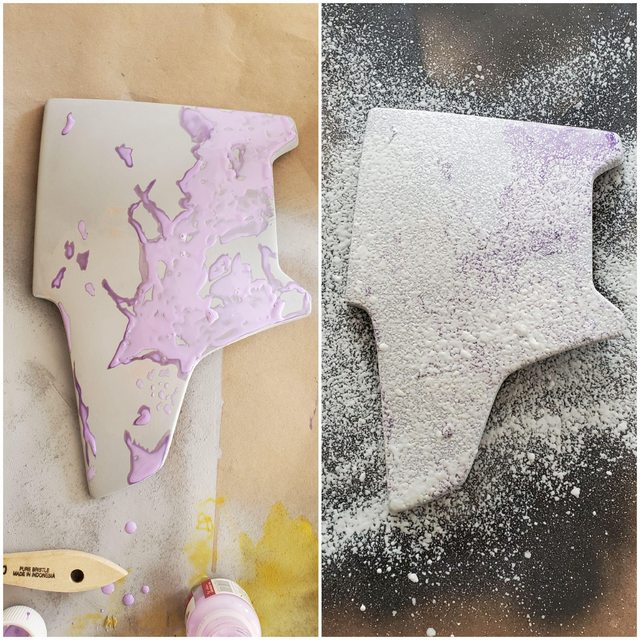 Like wise, the knees has a dent that needed to be added. Shoulders were based on Cobbs damage. All by eye (sorry) no stencils. Figured the armor is gonna look a mess with the texture anyway. 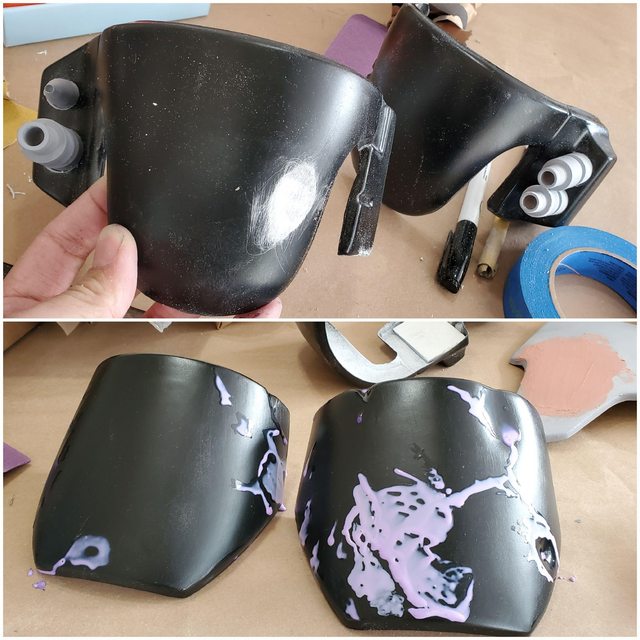 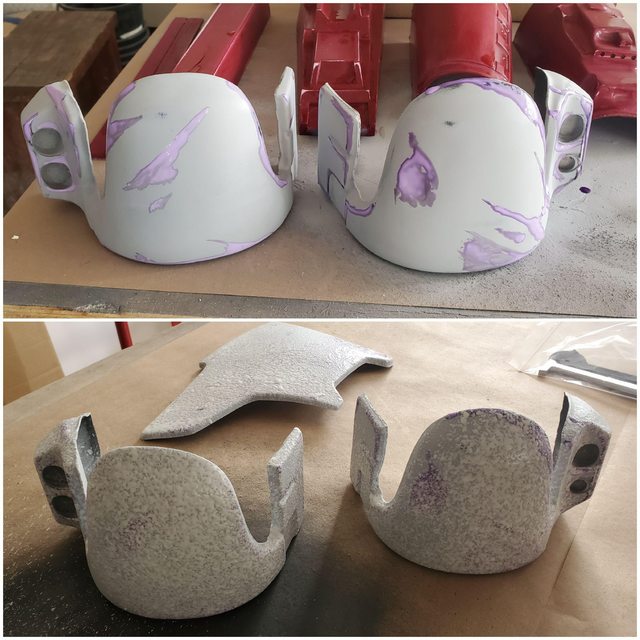 Gauntlets were prepped with a soapy bath and sanding session. Primed, painted with a base coat of Claret Wine, lightly sanded, then masked and textured. Damage again is based off Cobb Vanth's kit. 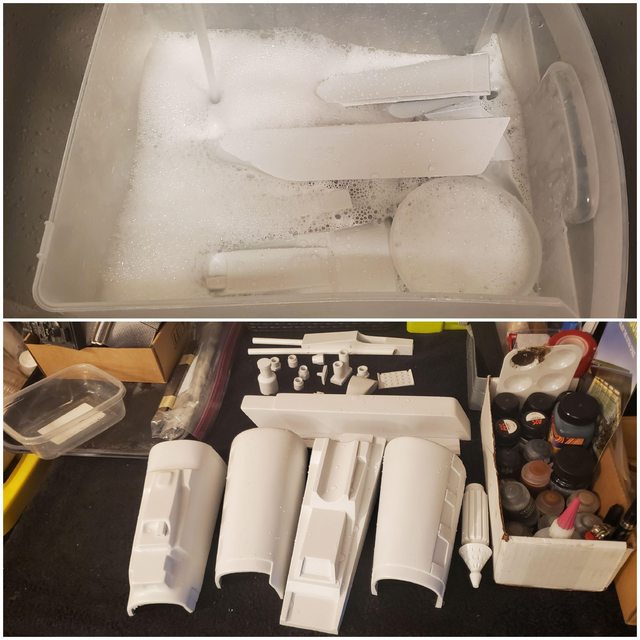 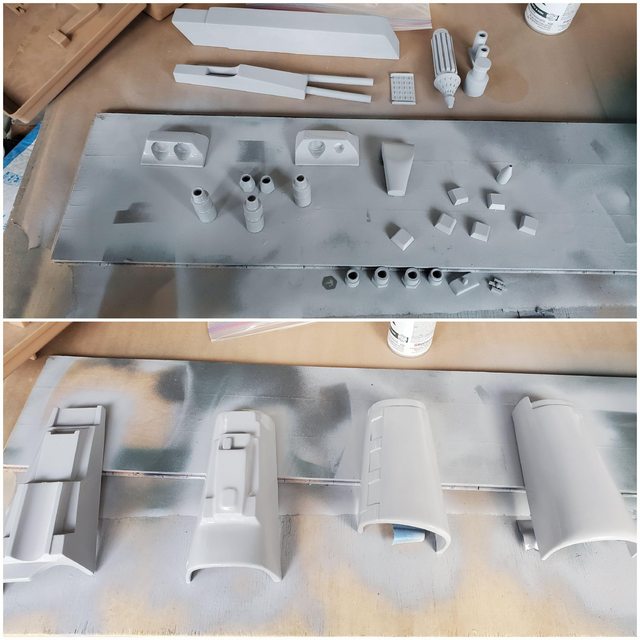 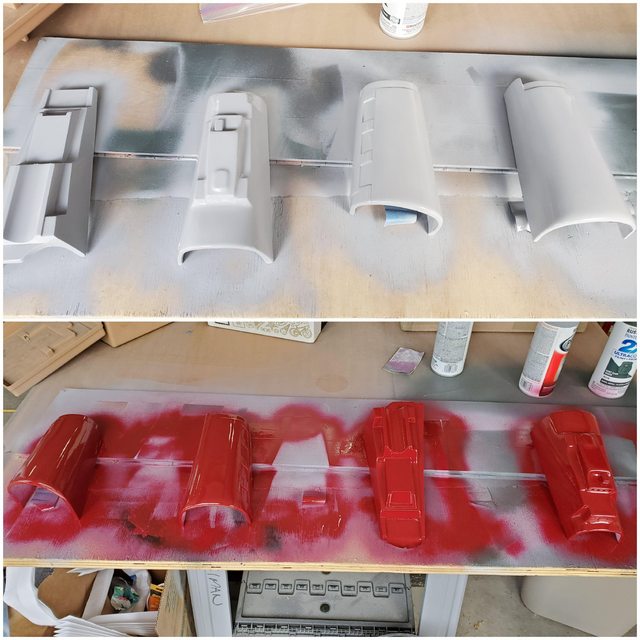 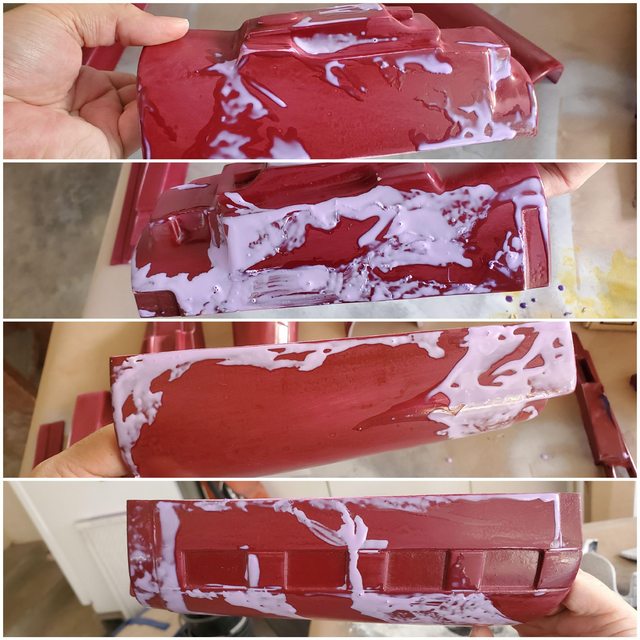 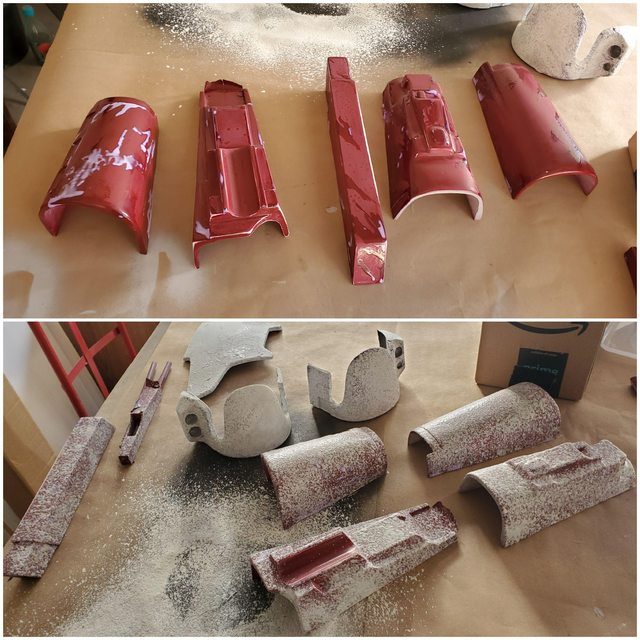 Somewhere along the way I cut a rectangle out of the back matched to the back image in "The Believer" and masked damage was loosely based on RotJ and typical damaged areas. 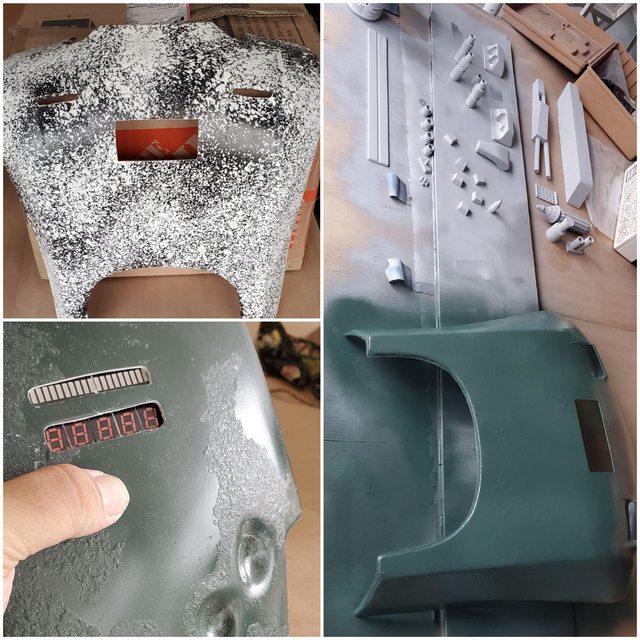 So by now... I was looking something like this:

Parts are still coming in as the client sends them to me, including these switches for the gauntlet blaster. Which appear on Cobbs, but I can't quite make out on Boba's, but there's something there. Also, the 106D appears on Cobbs, but there's something else on the new Boba set I can't make out in images, so I left these off for the time being. RotJ Hero has them optional, so again, loosely based on that too. 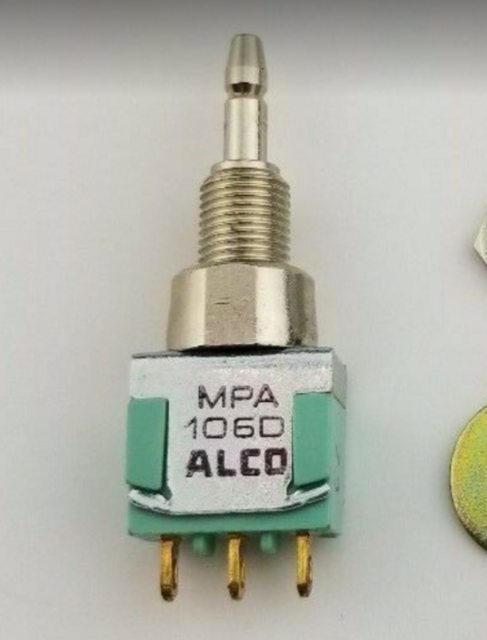 Gauntlets were textured, the top coated with Colonial Red, however, I found Colonial Red to be too bright, but it was a good base color. I spritzed a light coat of Claret Wine to give it color variation and the deeper burgundy color.

Did a quick airbrush on the kit as well as installation of the greeblies. In this photo, I still need to paint the bronze/copper bits. I masked off the gauntlet side to airbrush on a matte black and taped it off for the white squares (this is like an ESB addition to the RotJ look) Also to note is there is for sure a Red collar stud. The others appear silver/gunmetal and so I made a gray one for kicks (my own interpretation of the costume due to lack of images) 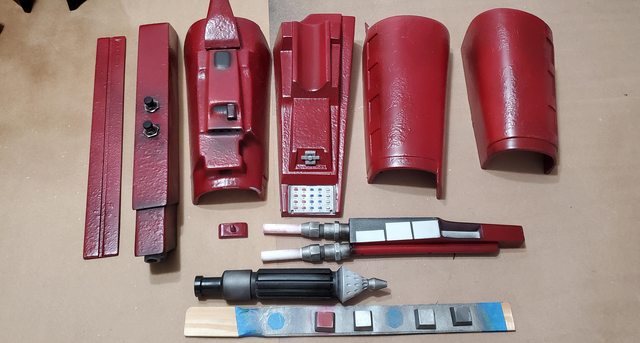 On to the shoulders. I did an orange airbrush base coat, then did a rust yellow over top for color variation. A lighter yellow was airbrushed into the lower grooves from the masking for color. Black was added for shading and weathering. The same steps were repeated for the knees.

Note: there are very few references of Boba's knees besides the color. Even when he sits on the throne it's difficult to see, but that's also where I noticed the dent in the right knee. Damage was based on Cobb and the left knee is loosely based on RotJ. (We see the right knee on Cobb and again when Boba suits up for the first time, but dude has FOUR dart launchers! I built the kit as RotJ. 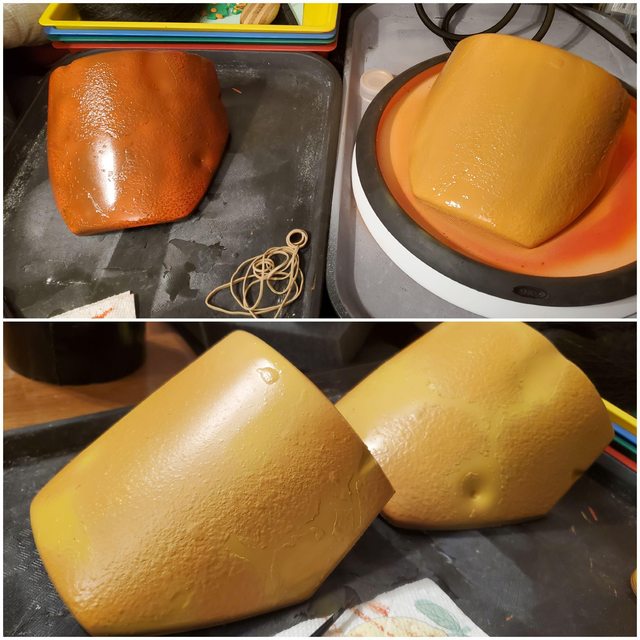 Back in the garage I revisited the armor with airbrushing details using two shades of green and black added for color. As the sun set I was able to get lighting checks with sunlight, indirect sun, and indoor lighting.

Here's gauntlet darts installed (colored rings are based on ESB's red and black) as well as chest LEDs and decal set. The LED set I have appears to be the classic set, not the new scanning bar of the new look, but that's an easy replacement if accuracy is critical (but then that throws the whole costume into question. Just doing what I can with what I've got but I'm totally okay with the pros coming in and telling me exactly what's there and providing references, heh)

And that brings me back to where I am today: 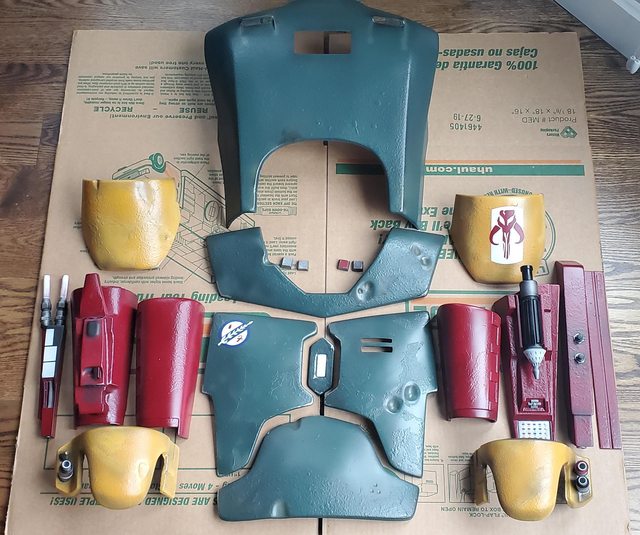 I've got to start up the helmet and will provide updates along the way. Still a few tweaks on the armor and some details, but pretty much there for my part. I fully intend to throw together a soft parts kit to try this on for a few images before I send it off to the client.

Thanks for following along and feel free to leave comments or clear images of the costume for reference, even a link to a library/folder if you have it. I've already come this far based on the build time I've quoted and am not likely to change much, but if I can I will.

MODERATORS: Can you please move this to The Mandalorian thread? I realized I posted to OG Trilogy >.<

the good meaning of the word sick.

Maybe its my phone or my eyes, but i cant make iut the names of those mig paints for the armour.
Couldnt be a gem and post the names or codes for them could you.

lovelyandy said:
Maybe its my phone or my eyes, but i cant make iut the names of those mig paints for the armour.
Couldnt be a gem and post the names or codes for them could you.

am I following this thread already? Well that'd be fixed now anywys.
I like your work so far!
S

Interesting. I just need to know how this turns out.

This looks great. I've been looking for the decals. Where did you source yours?

Damn. That looks excellent thusfar. Delete if not allowed - but has anyone found a good rattle can option for the shoulders? Having trouble finding that lighter mustard color.

sevenyearsblood said:
This looks great. I've been looking for the decals. Where did you source yours?
Click to expand...

There is a guy or two that sells them around here somewhere.

sevenyearsblood said:
This looks great. I've been looking for the decals. Where did you source yours?
Click to expand...

The mythosaur and chest emblem are the two I picked up.