I have really been fretting about putting together RKD's V3 knee kit (with the insert). I am extremely anal and wanted the knee darts to be parallel with the "ledge." Unfortunately, the "face" of the ledge and the "side" of the ledge are not at a 90 degree angle. The standard way to deal with this is to cut 2 holes in the ledge in the the appropriate places and secure by gluing to a foam insert. I don't like that approach because I could see myself really screwing it up and ending up with knee darts pointing in all sorts of crazy directions. I was also concerned about getting the hole size right. I don't really like it when you can tell that the darts are coming through the ledge as opposed to being fastened to the armor.

So here is what I did, for anyone interested in trying this out. It is very sturdy and about as square as you can get it.

I started by cutting the holes in the appropriate spots on the knee armor. It is best to make the holes small and slowly expand to make them bigger. Remember that because this is not at a 90 degree angle, the holes will be elongated in shape. 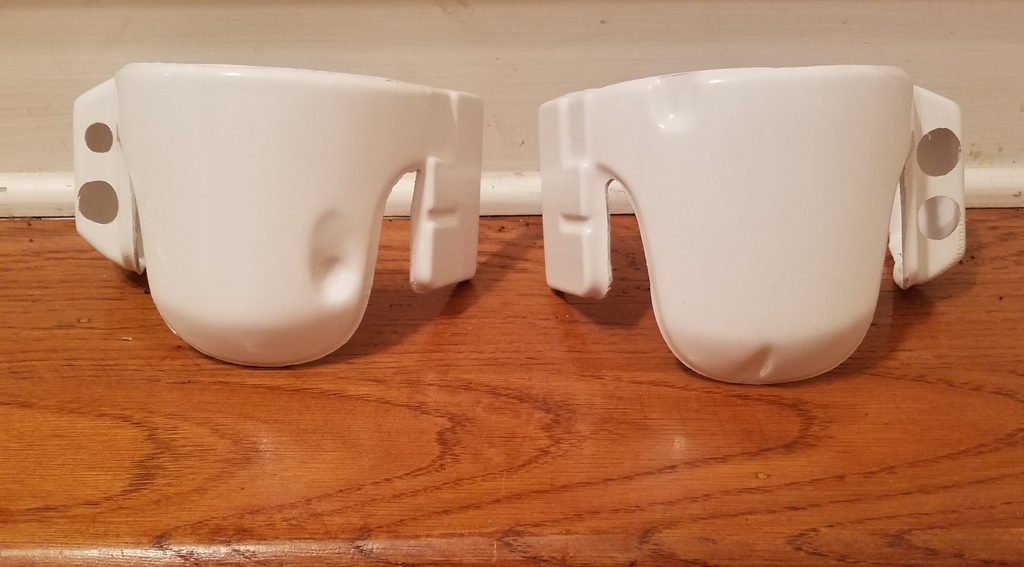 After cutting the holes, I cut the angle to fit inside the ledge. With the darts penetrating the holes and pushed firmly against the angle aluminum, I drew an outline of the darts against the aluminum with pencil. I then drilled two holes in the center of the circles I drew on the angle aluminum and drilled and tapped the darts. I tried to get them as centered as possible, however, it is not necessary to get them 100% centered as you will be able to turn the darts around once you screw them into the angle to get them positioned just right. When done, they should look like this:

If everything went well, you should be able to push the darts affixed to the angle aluminum through the two holes. I used painters tape to insure that the darts were pointed in the right direction. Also not seen here is the fact that I sanded the inside of the ledge as well as the angle iron with coarse sandpaper to help the JB Cold Weld adhere (in the next step). 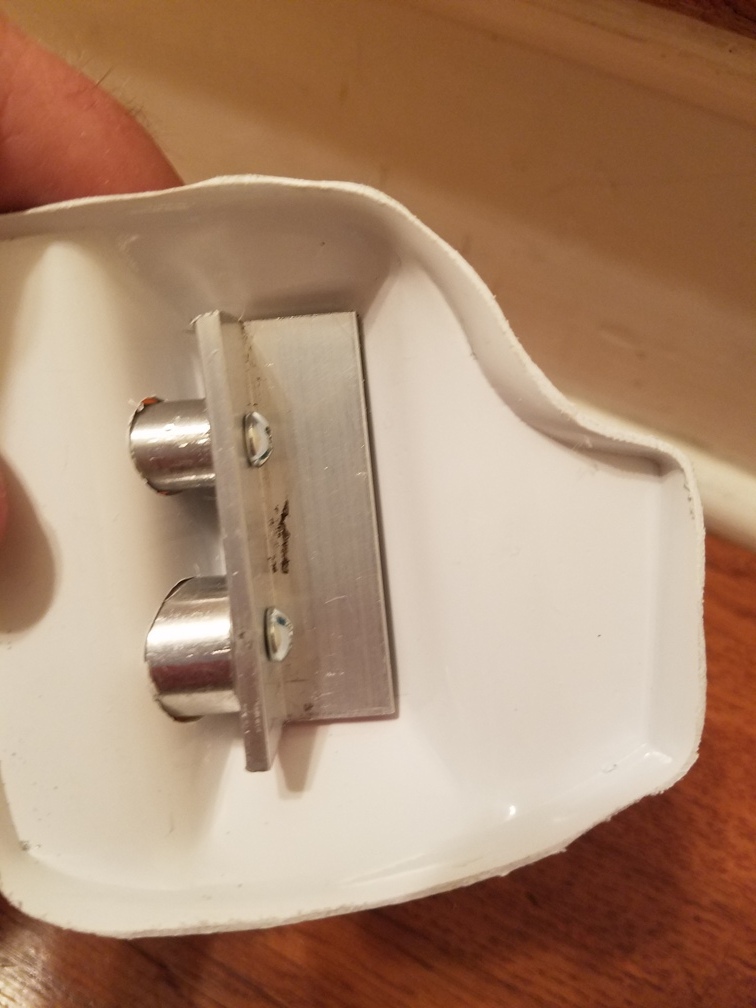 Next, I mixed up the JB Cold Weld. This takes a couple of hours to set, which makes it nice to work with. I really slathered it on good. I not only used to to get the angle to adhere to the inside of the ledge, I also used it to close the gaps between the holes in the plastic and the darts. You could use plastic two part epoxy for this task... it would probably adhere to the plastic better, but it sets quickly and isn't as good at filling gaps. I used Q-tips to work the JB Weld into the gaps and then cleaned the outside out with a paper towel. It worked pretty well. 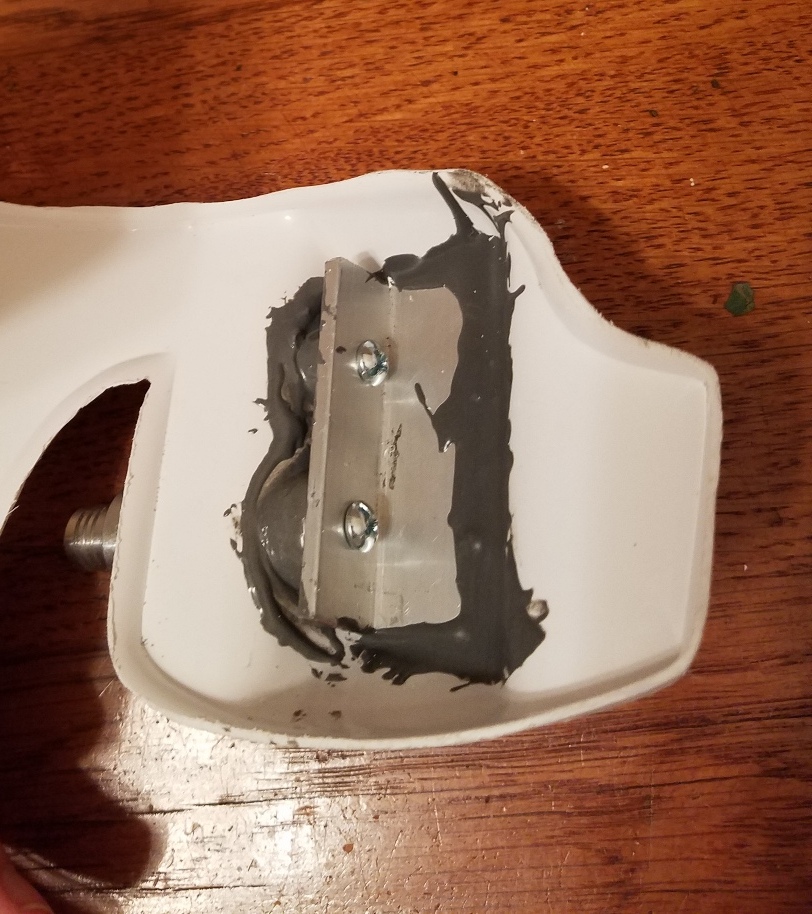 Here is what the outside looked like after it dried. You can see that the gaps were filled in nicely. There is a little JB weld left around the plastic, but this will be painted and primed, so I am not worried about it. It should look nice when I am done. 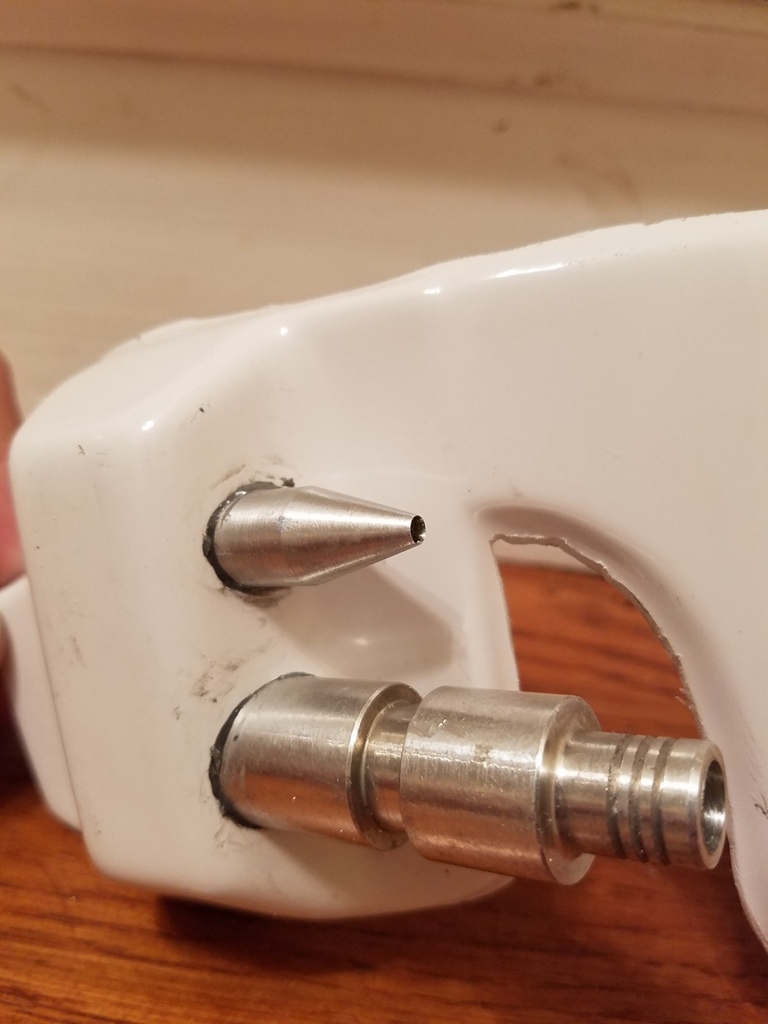 So now it is time to install the insert. I used JB Plastic Weld for this task. The insert presses against the angle aluminum, really firming up the whole piece. I also epoxy together the surfaces using binder clips to help it set. It is probably good enough after this step, but I want some additional durability. 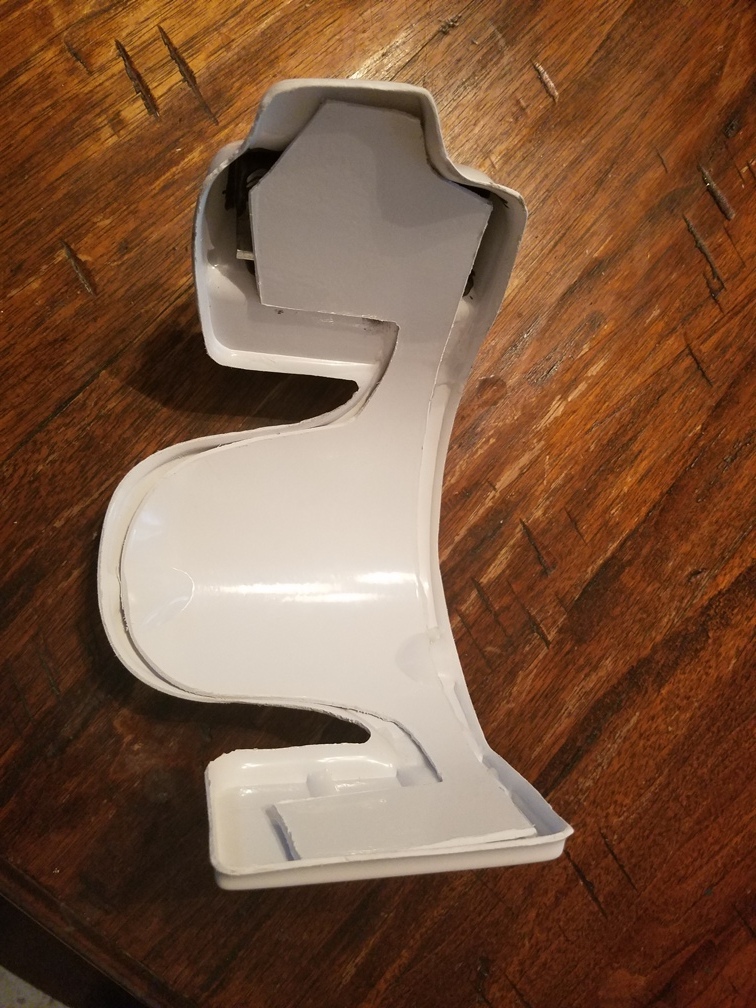 After the Plastic Weld has set, I decided to fill all of the gaps with "The Great Stuff" expanding foam. This stuff if really fun to work with. It will fill up the empty space in the ledge. I also spray it in the gaps between the armor and the insert for additional strength and durability. This stuff is really messy to work with. You should have some acetone handy if you screw up, but be careful because acetone will dissolve plastic, so use sparingly if you must. The Great Stuff will expand a lot, so a little bit is all that is needed. It will expand and go all over the place, but that also means that it is expanding into the gaps between the armor and the insert. 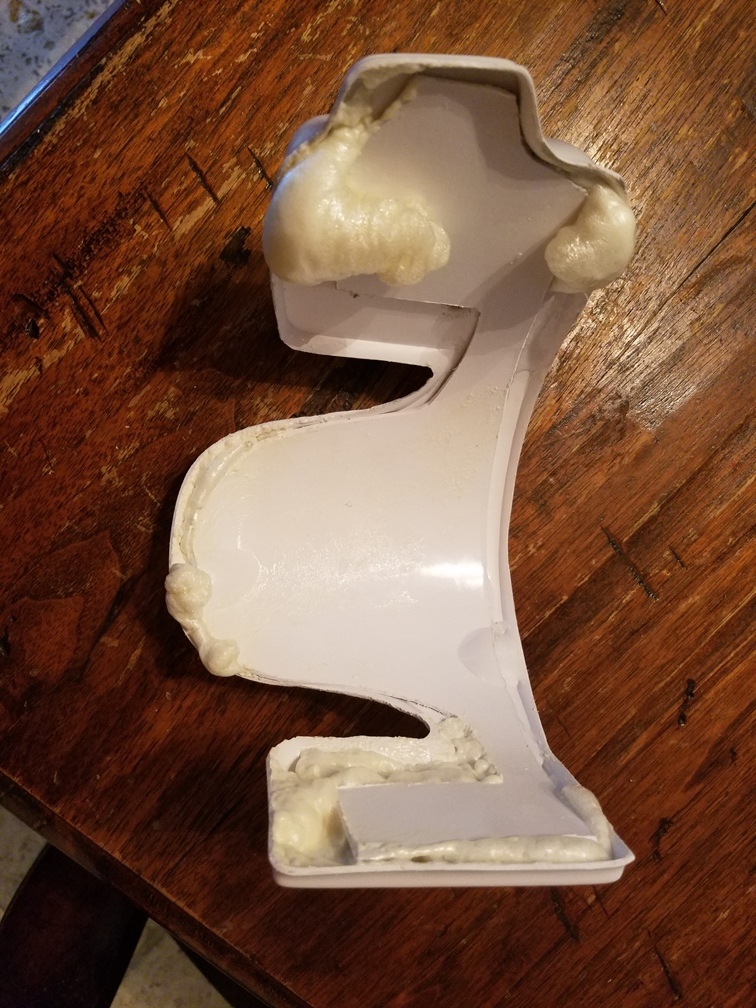 After it has expanded and dried, I trim the foam with a knife. 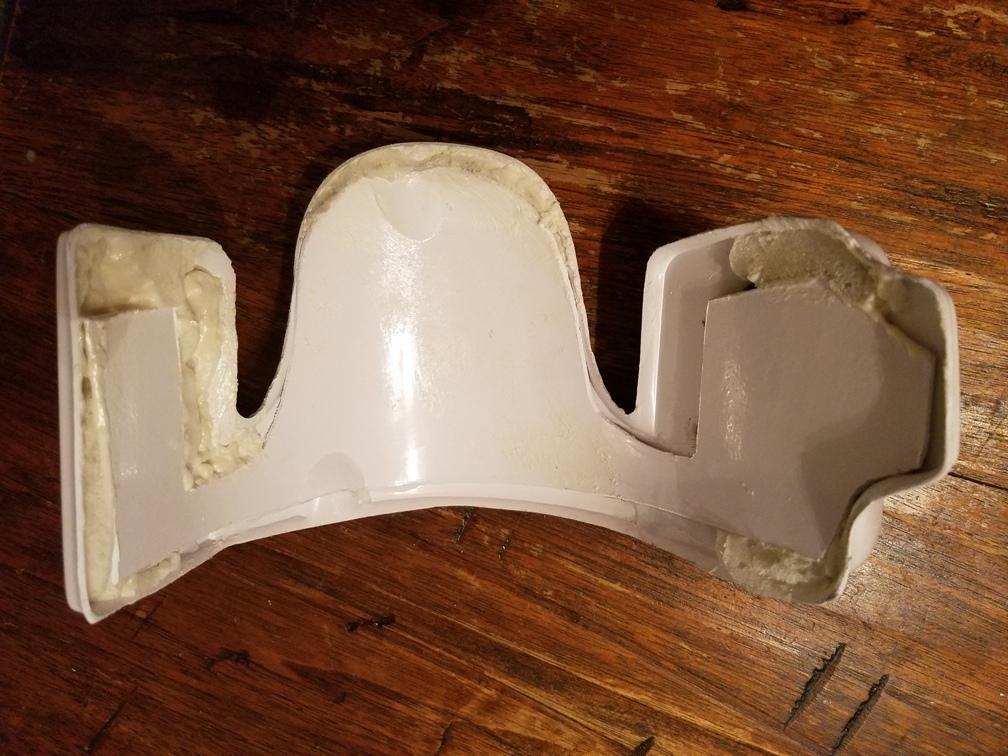 It might make sense to paint after cutting the holes and then installing the darts afterwards. I elected to install first and then paint, using painters tape to mask off the darts. The advantage to this approach is that my JB weld gets painted over, but installing after painting would work as well. I was just afraid of having to touch up a pretty complex paint job. And here is the final product: 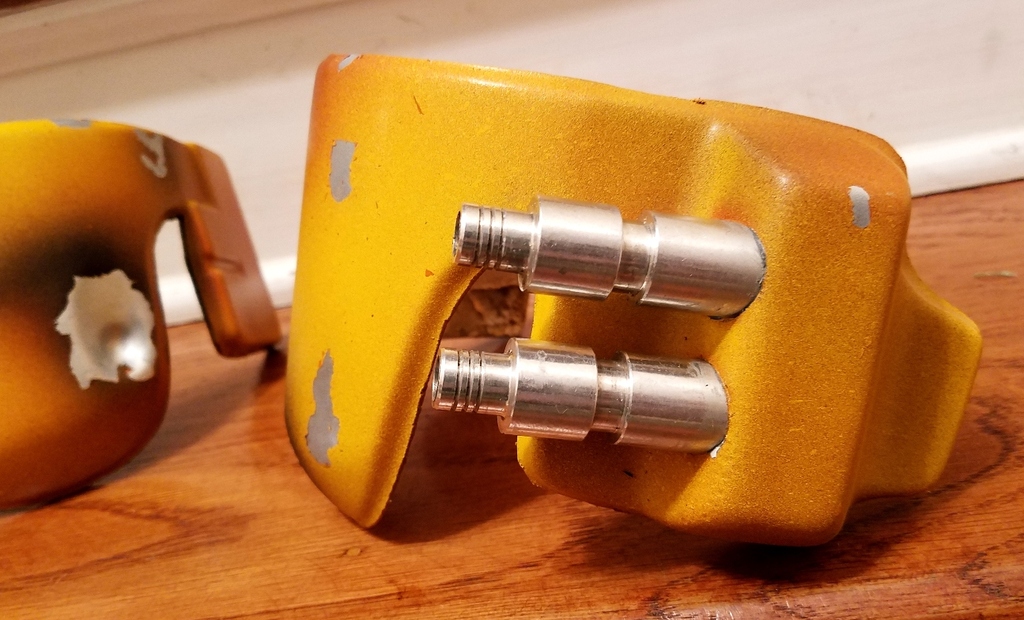 I will still probably have to touch up some small areas, but I felt like it came out looking pretty sleek. Obviously, I need to add the straps and velcro and so forth, but this is pretty much done. Let me know if you have any questions or comments!

I like your paintjob!
Did you paint the expanding foam too? It falls into pieces if daylight is hitting it after some month.

TK50175 said:
I like your paintjob!
Did you paint the expanding foam too? It falls into pieces if daylight is hitting it after some month.
Click to expand...

I did not paint the foam on purpose, though in the process of painting the armor, I did end up coating the foam with a bit of paint. I have several costumes that are made from this stuff and haven't had an issue with it breaking down. I will post pictures of my Mayor McCheese costume if I get the chance.

Here is my Mayor McCheese made of great foam that I cast in a Weber barbecue pit.

clmayfield said:
Here is my Mayor McCheese made of great foam that I cast in a Weber barbecue pit.
Click to expand...

I really like this a lot. This is a great idea.

It's definitely more work and more steps (and more tools) than your foam installation kit, but it is a little stronger and a lot more fool proof in terms of getting the darts pointing the right way. I liked how your foam inserts firmed up the kit, which is why I decided to use Great Stuff Foam. And once I was doing that, I figured I would hit all of the crevices for additional durability.
R

This definitely gives people a great option if they have the knee darts with the bolts on the back and/or don't want to use the foam inserts.

Ive got some RKD knees recently and I like the idea of using expanding foam to add more support ! Nice technique

clmayfield said:
It's definitely more work and more steps (and more tools) than your foam installation kit, but it is a little stronger and a lot more fool proof in terms of getting the darts pointing the right way. I liked how your foam inserts firmed up the kit, which is why I decided to use Great Stuff Foam. And once I was doing that, I figured I would hit all of the crevices for additional durability.
Click to expand...

Did you say that stuff is called plastic weld? The expanding foam thing?

No. The foam is called "Great Stuff" (link to Lowes embedded).

For two part epoxy, I used JB Plastic Weld. You have to use plastic weld before Great Stuff foam. The epoxy will act as a solvent and melt the Great Stuff if you apply it to the foam wet. Alternatively, you can use another adhesive, such as JB Cold Weld, which I don't think will melt the Great Stuff. I just opted to glue the pieces together with Plastic Weld, then use the straw to direct the foam to the gaps, then cut off the excess foam after it dried.

If you ever need to start over again with Great Stuff, use Acetone to dissolve it, but work quickly as Acetone will dissolve plastic as well if you leave it in contact for a long time.

Note: that link didn't work. Just google "Great Stuff Foam" and you will find it.

Perfect! I'm working on the knees currently and this is going to be a lot of help. Thank you!!!!