Thought I'd share a couple of projects for a 1:1 Mythos Fett cosplay.

First up, the DLT-19 sniper he carries: 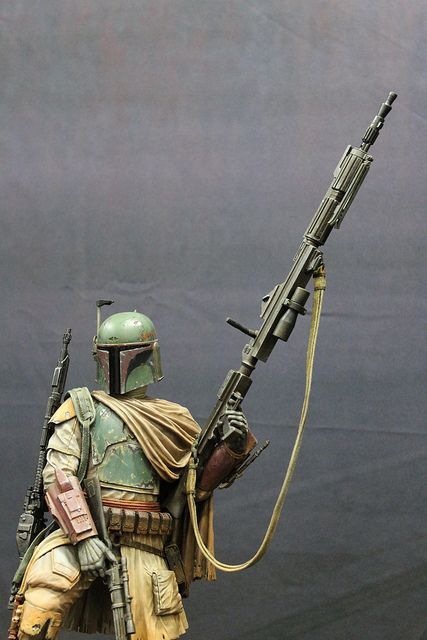 The goal was to put together a good representation of the rifle using the Mythos statue as a reference. Not a lot of extra requirements, just that it had functioning sling points and could be broken down in two parts for transport.
I started off getting a 3d model together using screencaps and a couple of auction pictures. After a bit of work, I ended up here: 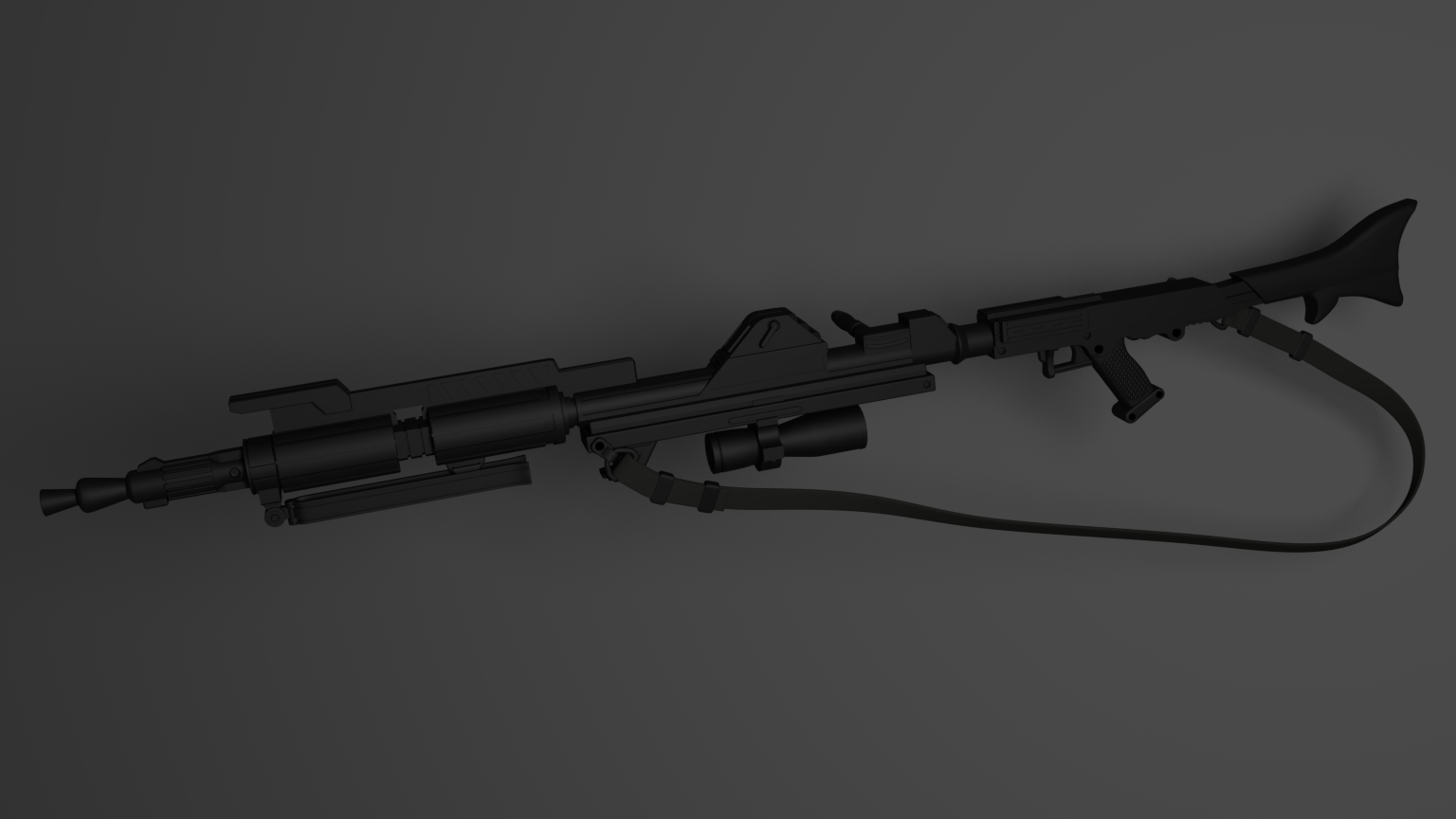 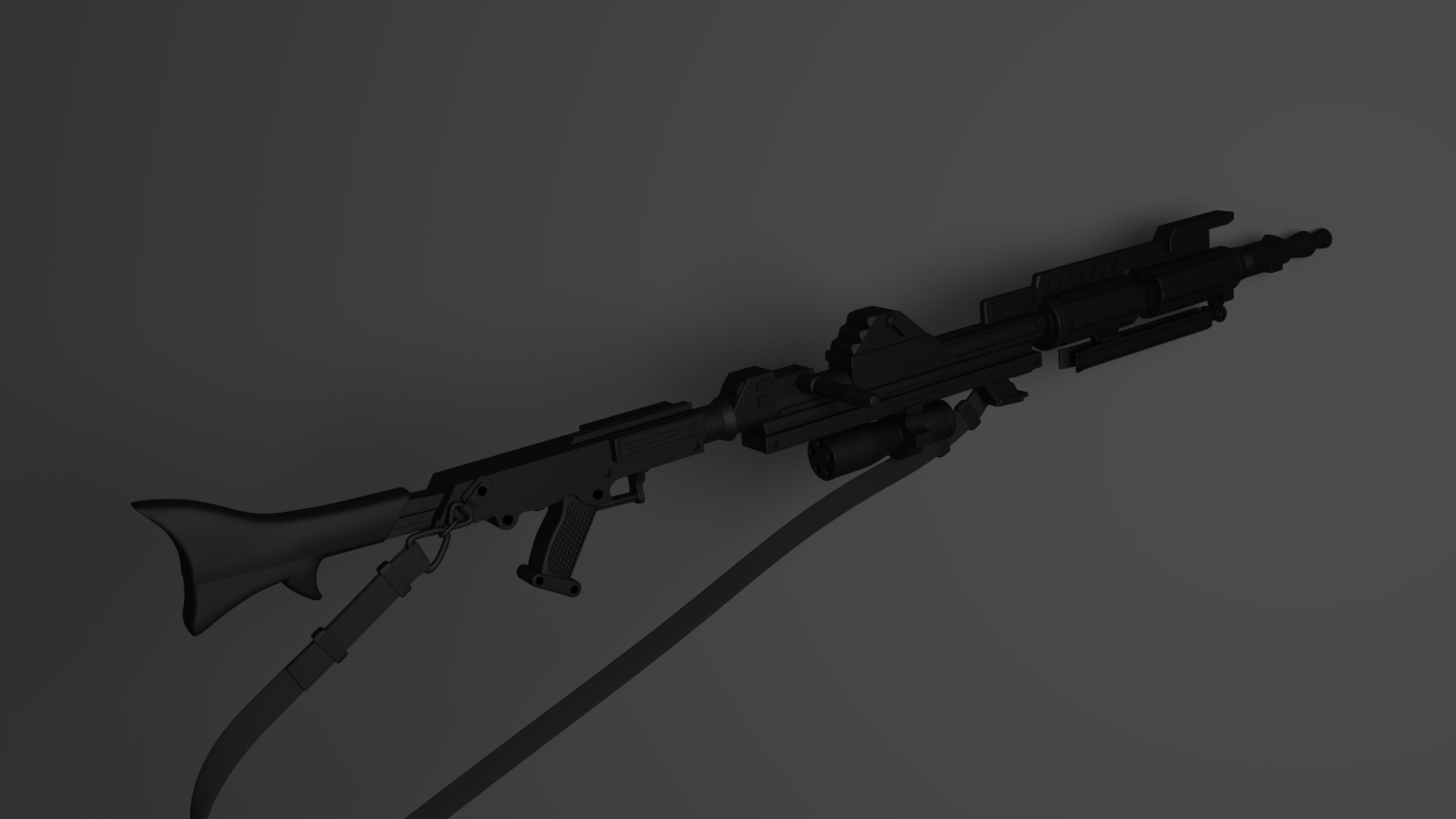 So.... After a bit of fancy phototelemetry (really just guessing), I settled on a length of just over 72 inches (somewhere around 1875mm) from butt to barrel tip. It needed sectioning to fit my printer, and I also wanted some pieces separate like the charge handle and sling points; that let me get better print detail by printing them separately at a higher resolution, and I could also print them solid so they were less likely to break. Along with those details, I added a channel for a length of PVC pipe down the center. The fitted pipe could be used as a joining point between the front and rear so the rifle could be broken down at least marginally.
Guide holes for real hardware were modeled in as well, so metal allen bolts could be installed in the handles (for looks) and additional allens could be used for the sling attachments (for strength).
After those mods, I ended up with something more like this: 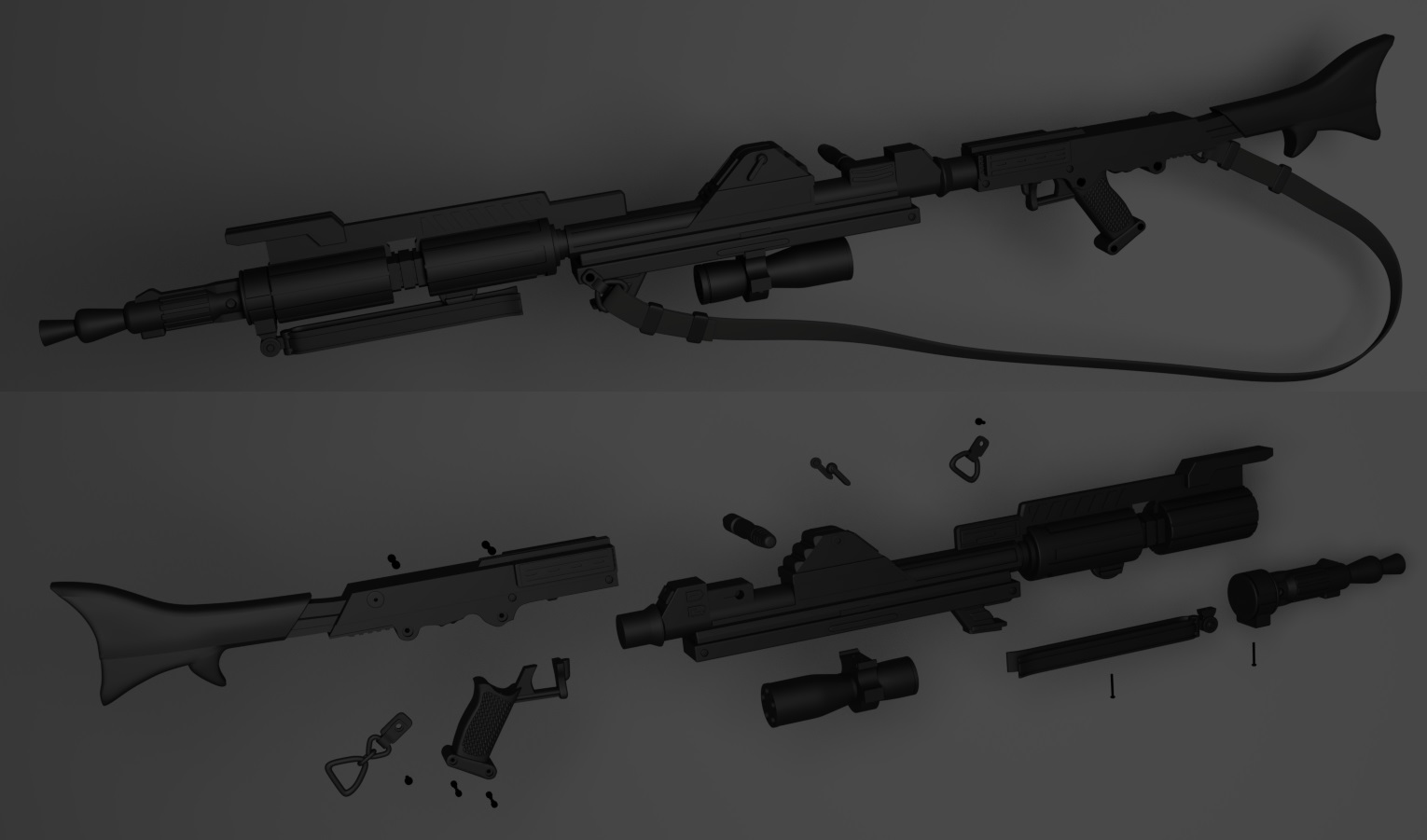 About 140 hours of printing later, I ended up with a pile of parts and the chance to test -assemble everything. I'm in the USA and this was traveling to Australia, so besides quality being important, the parts had to break down reasonably for shipping.

(* I also want to note, none of these printed parts have been finished at all, that was all going to happen at the other end. While printing all in black does give the pieces a nice uniformity, a lot of sanding and priming were in the future I'm sure)

So a pile of parts, and test fitting. I picked up my hardware and a length of pipe, and started giving everything a go. 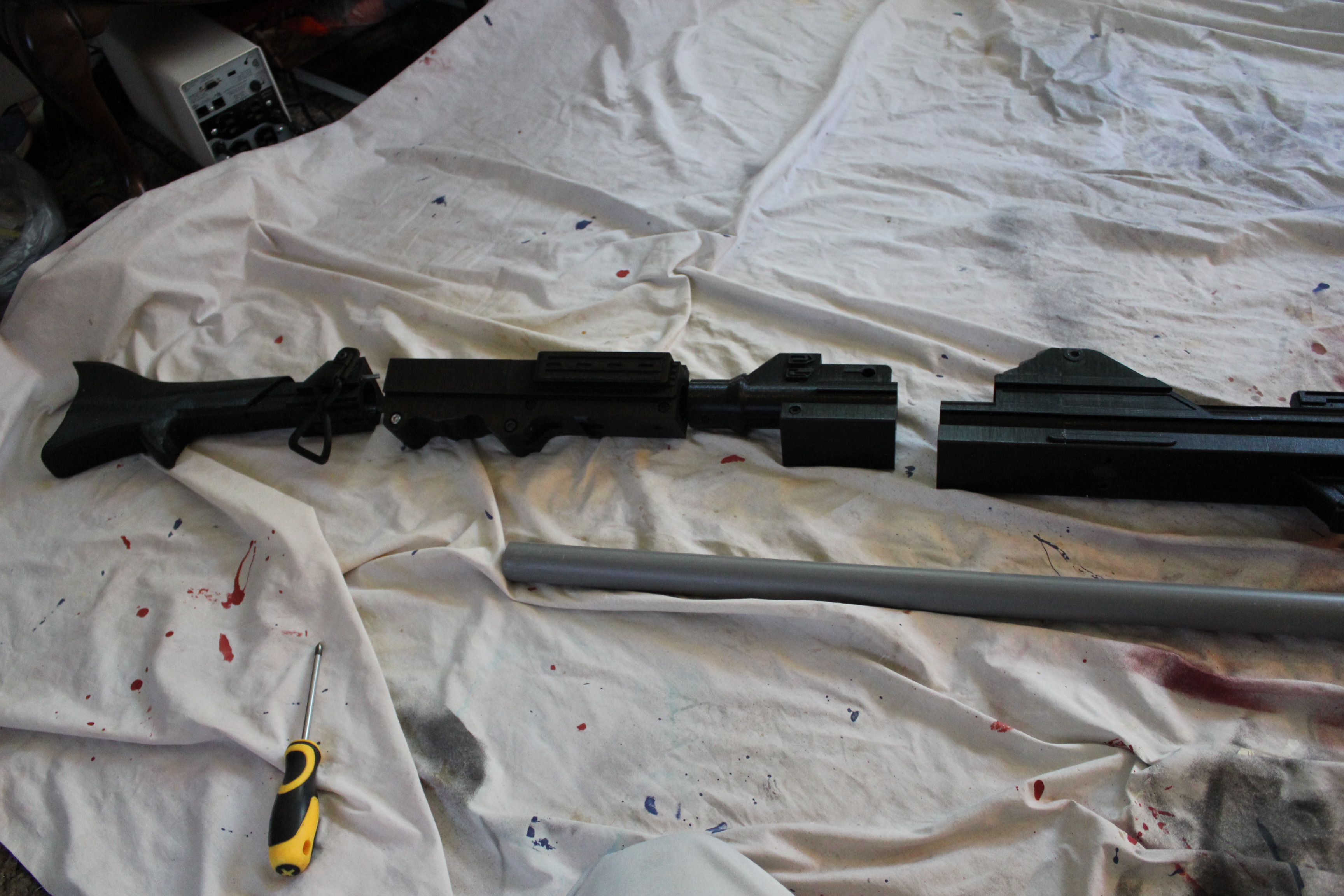 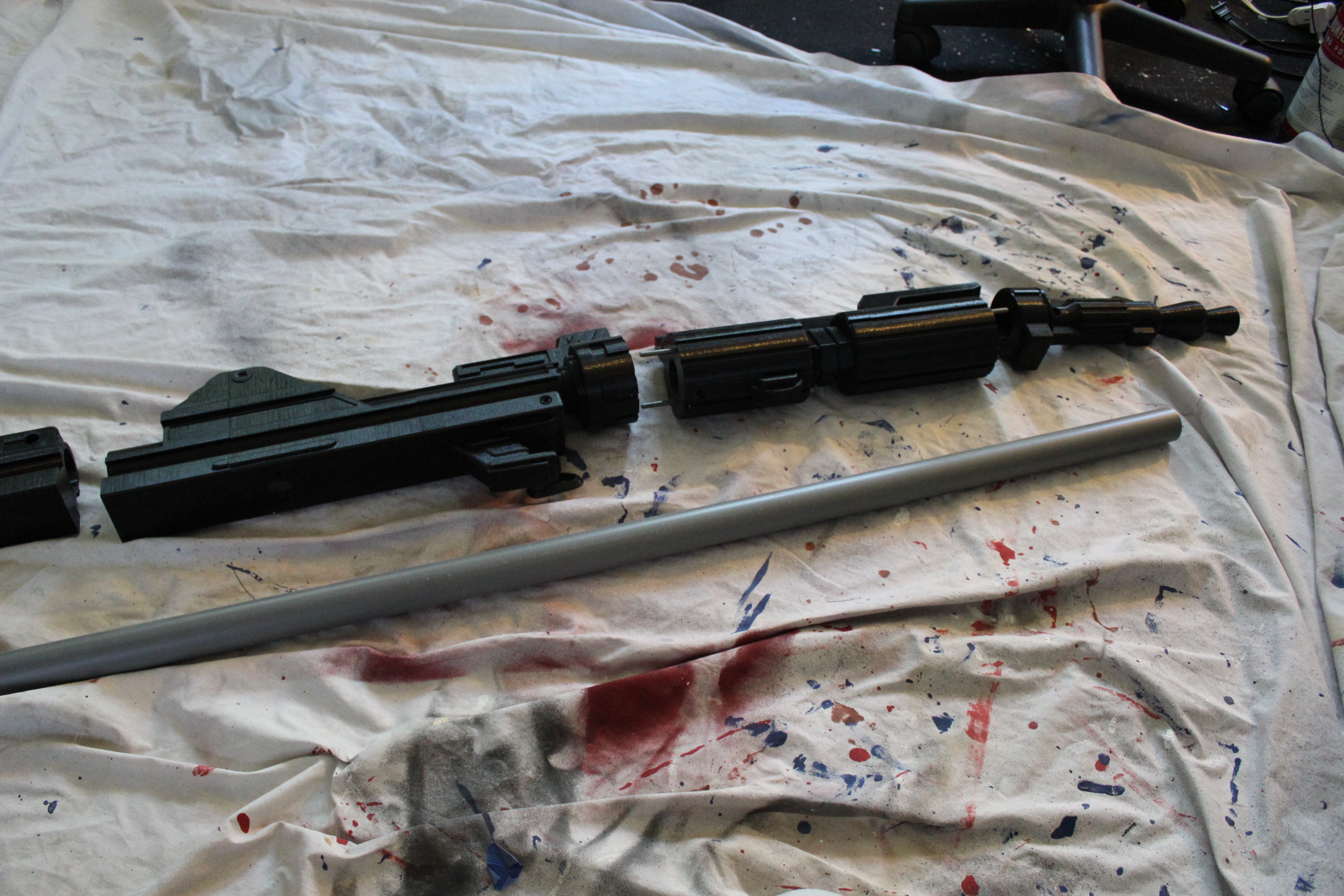 Hardware holds the sling points on (they are solid-printed as interlocked pieces and then broken free), as is the tripod mount due to it being the most fragile part I think. The separation-point for breakdown can be seen in the picture above, where 2 5mm rods complement the pipe connection to keep the parts from twisting. 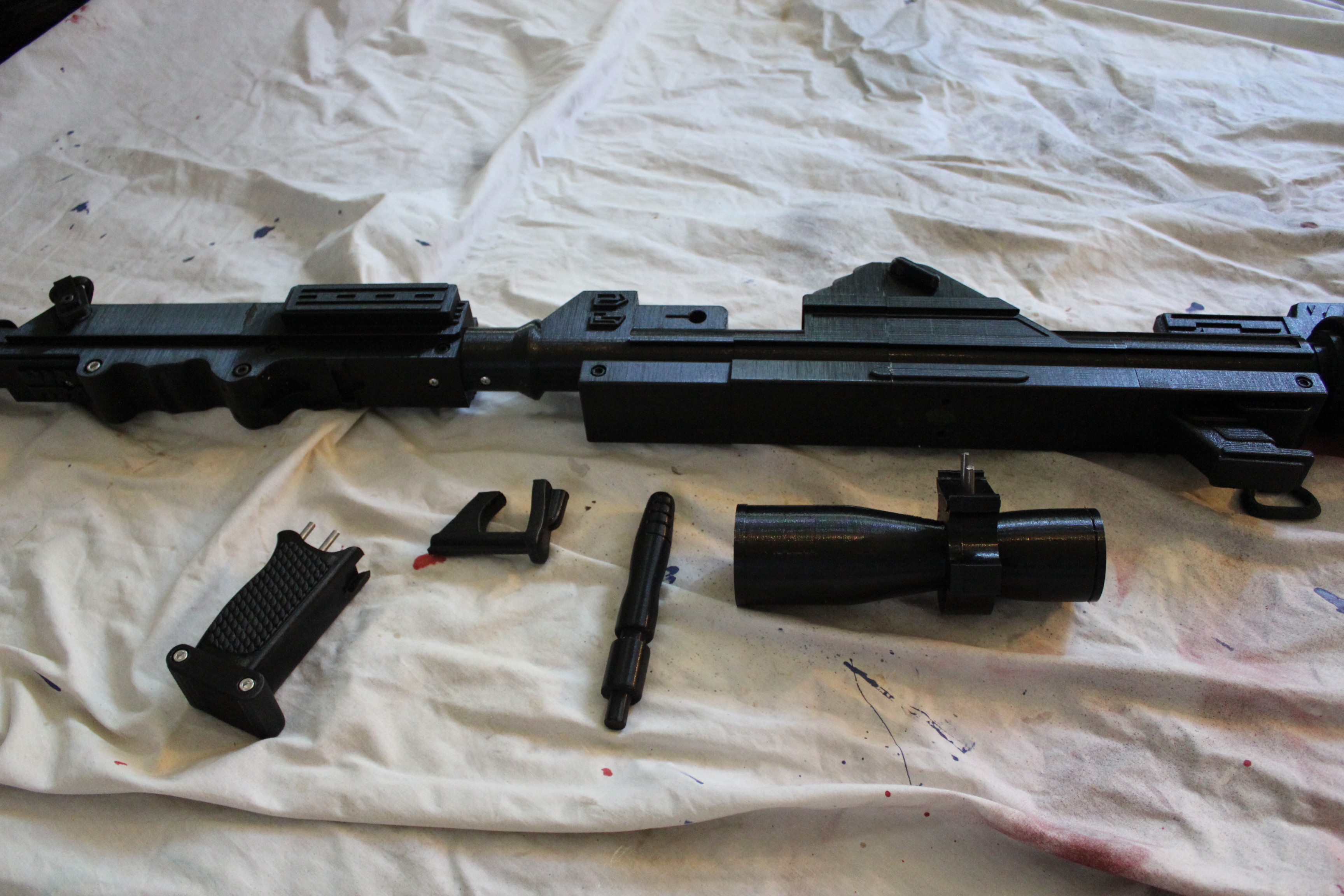 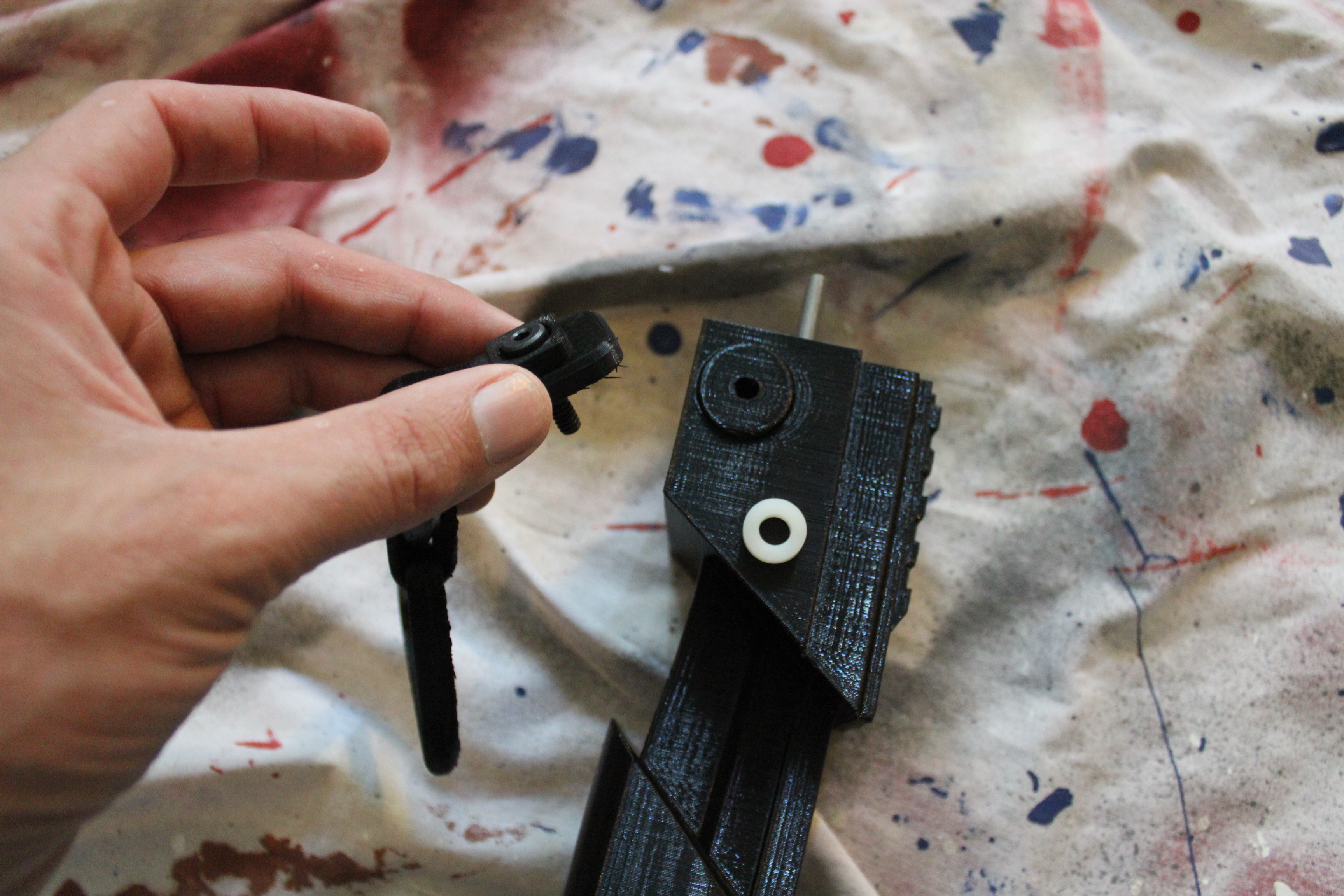 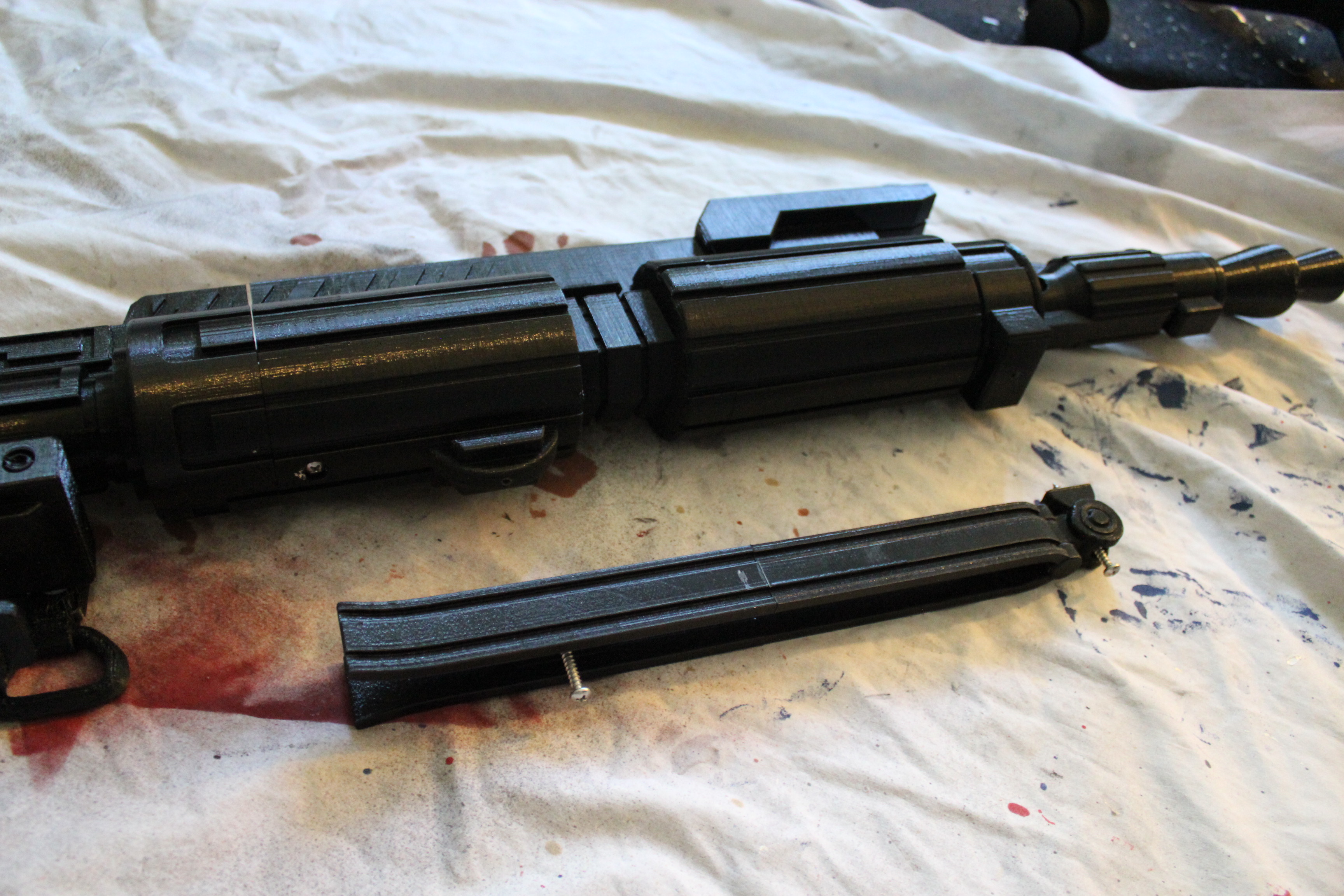 ....And a full assembly before tearing it down to go into a box. 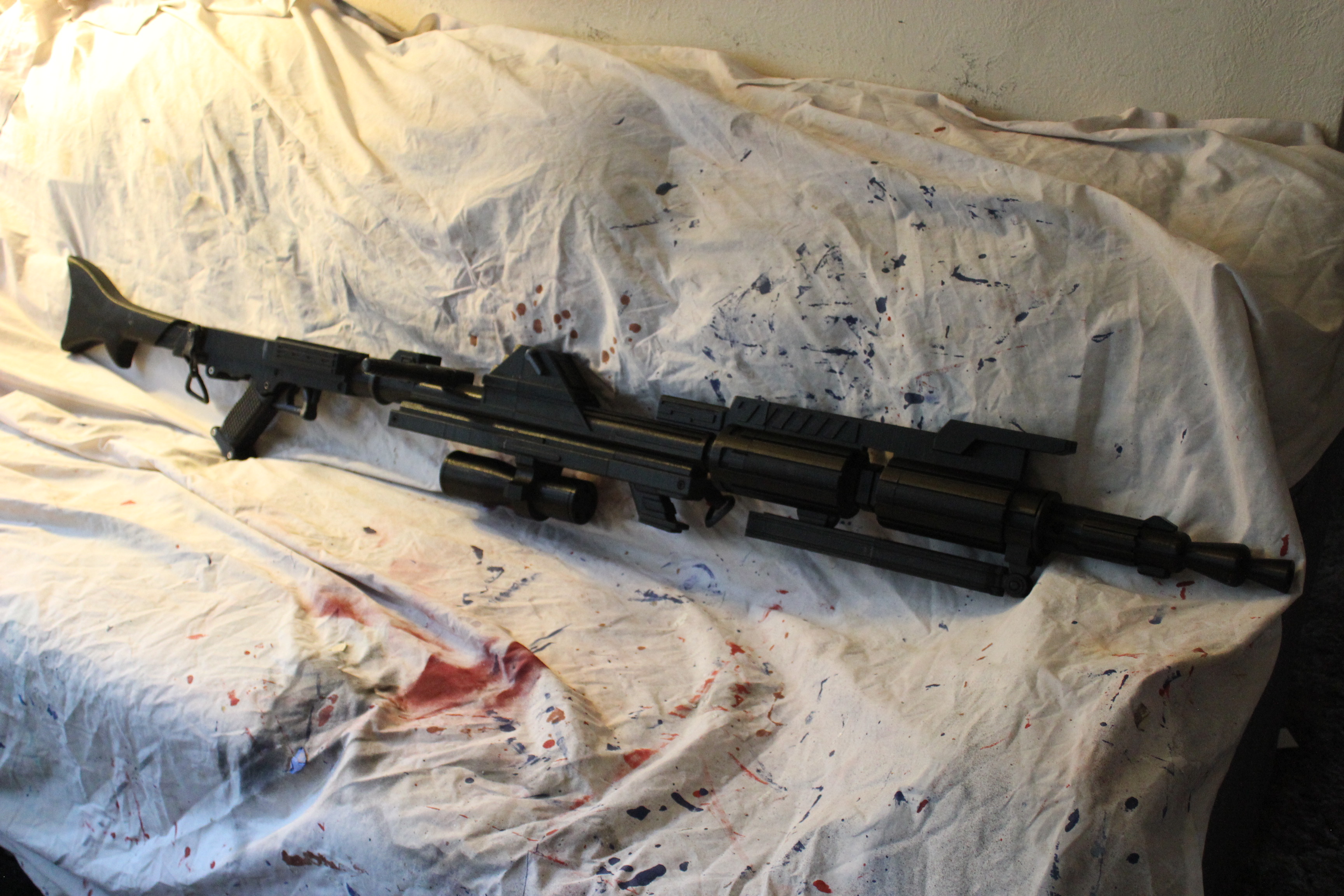 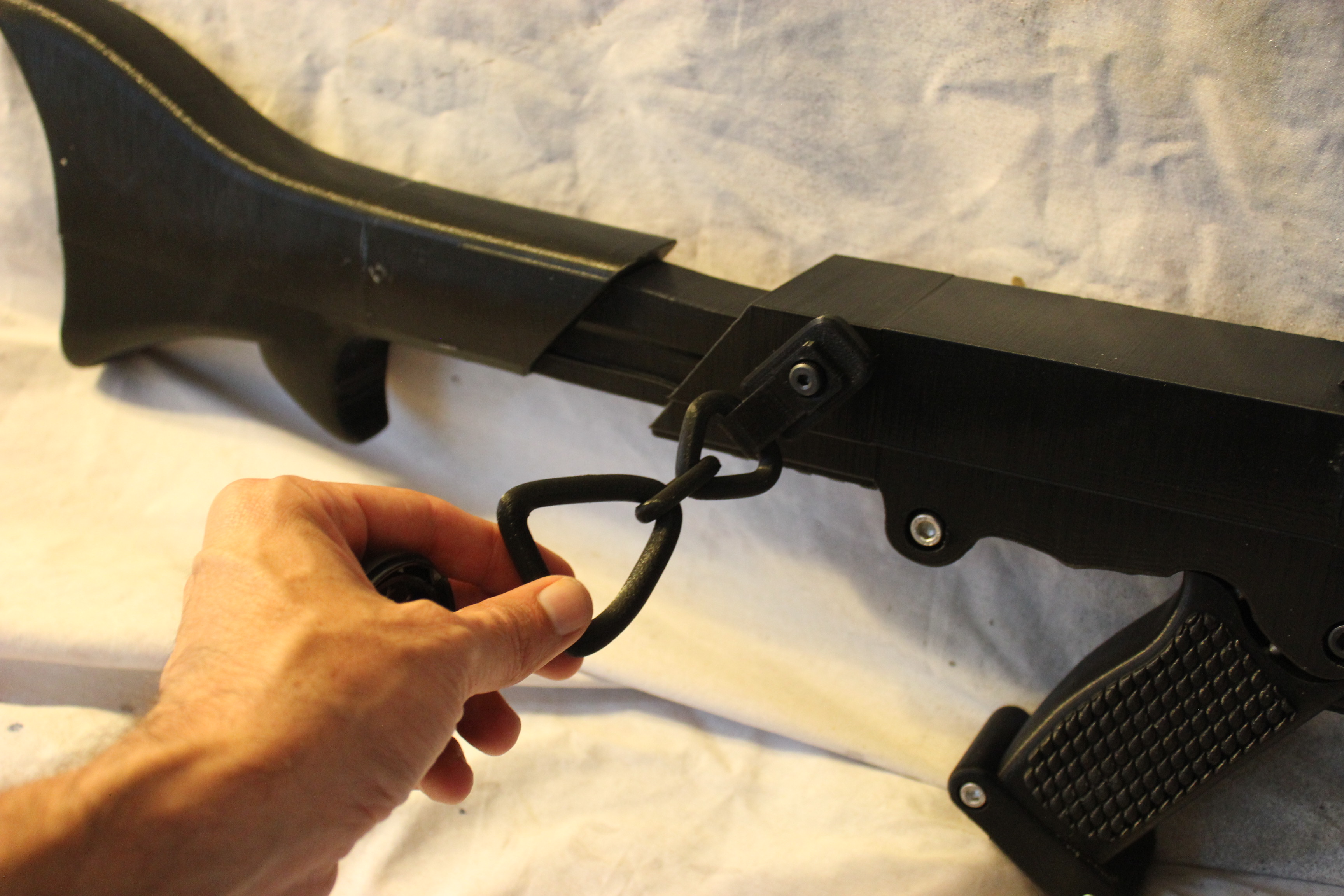 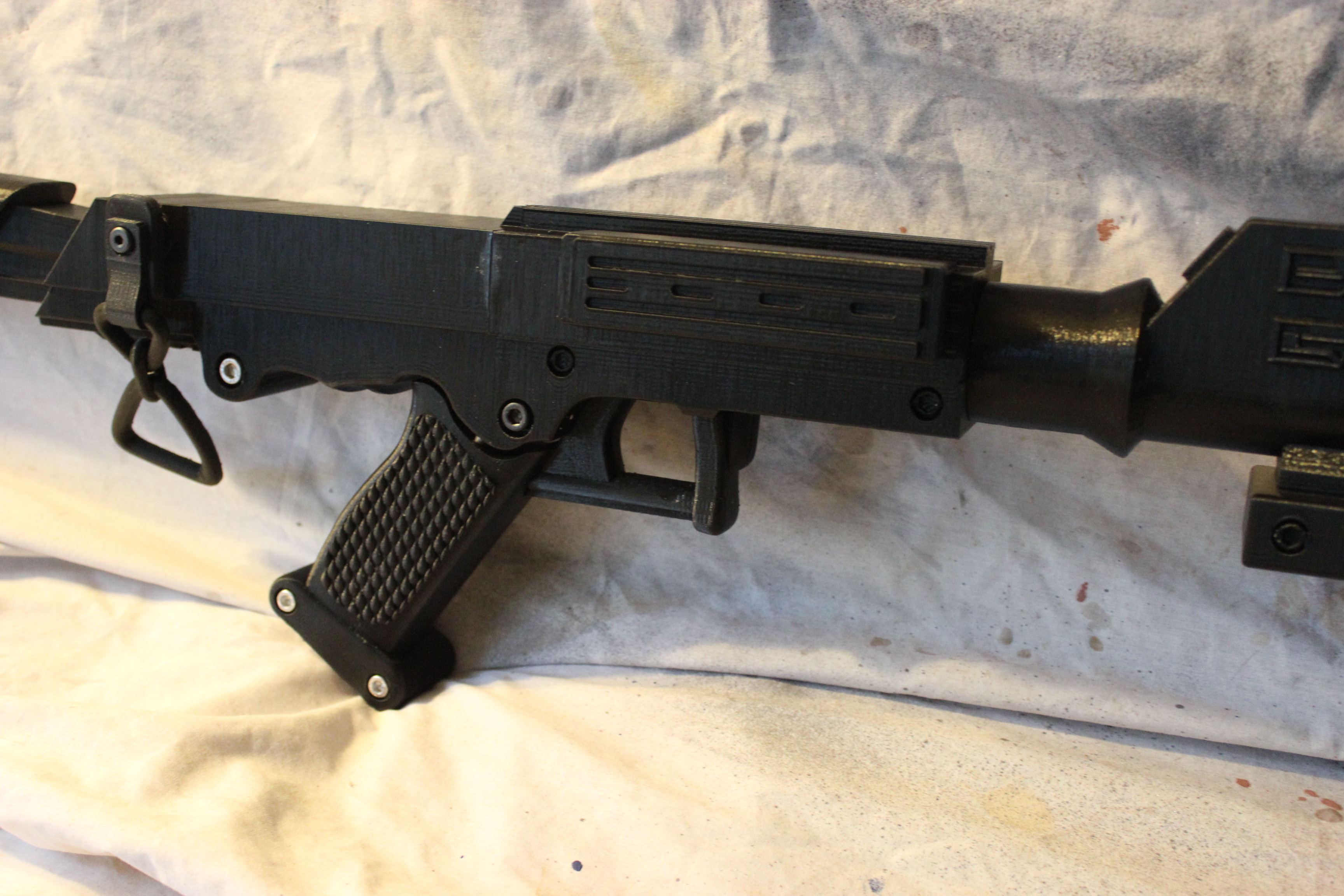 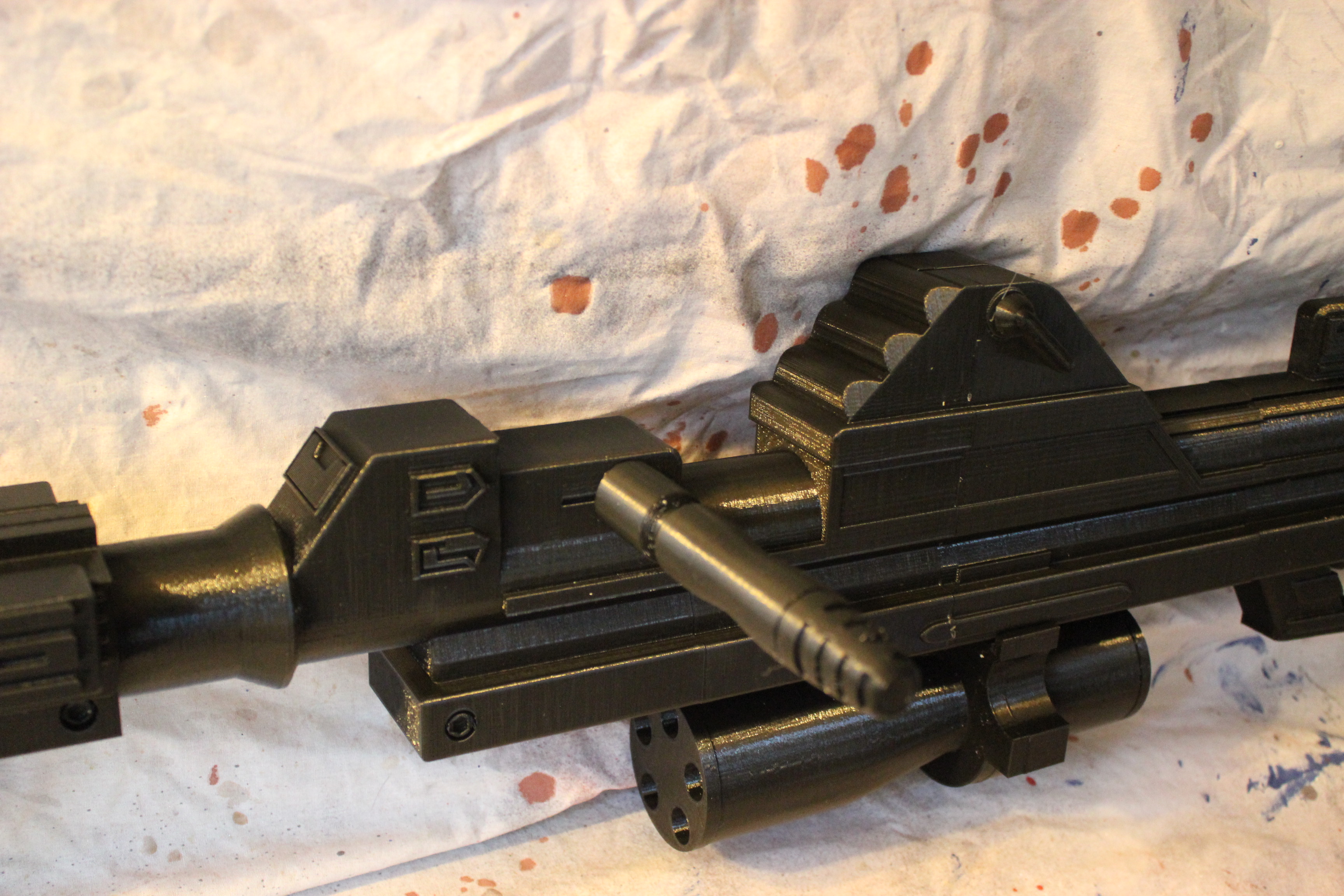 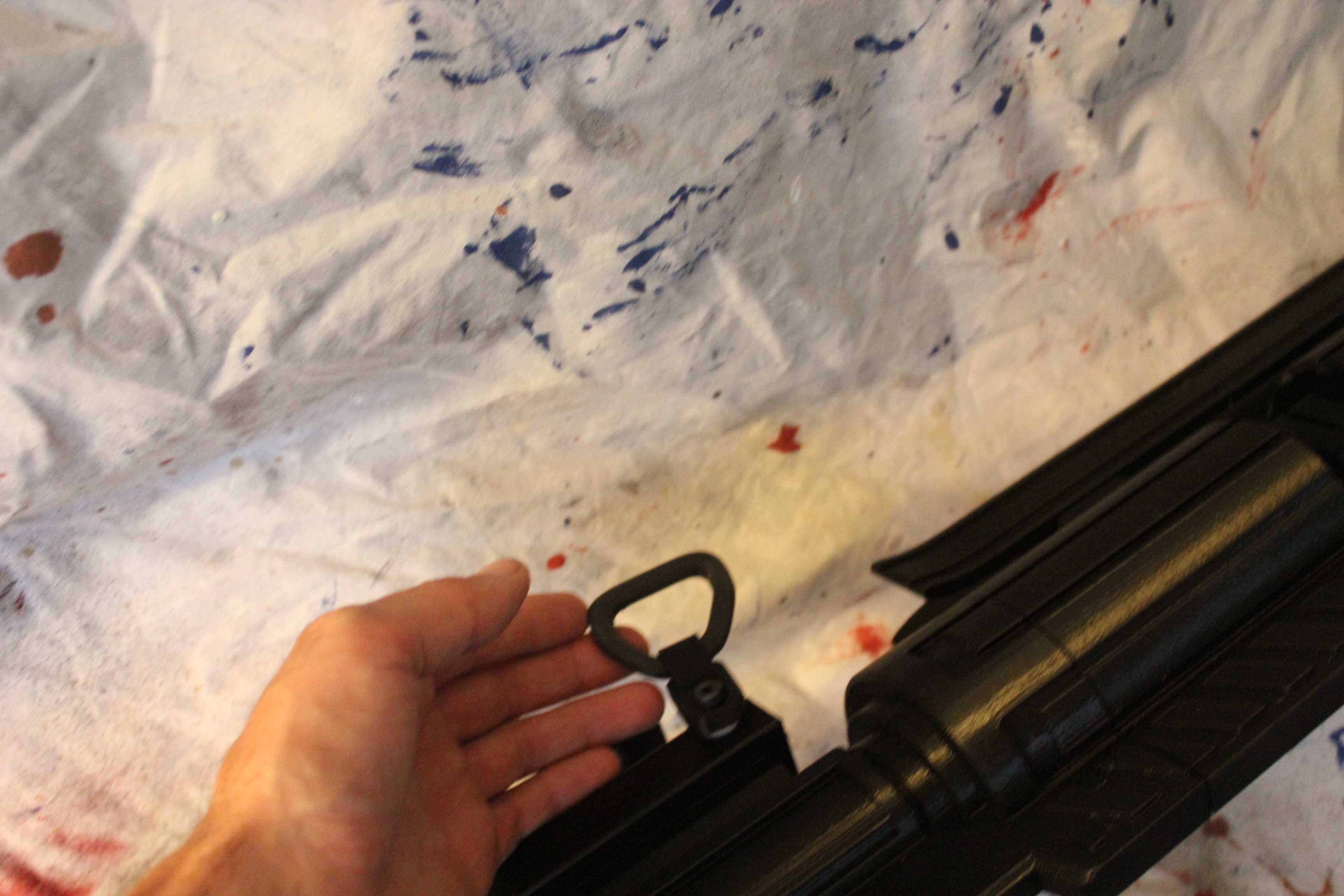 ....AND the obligatory comparison pic. Thanks for looking! 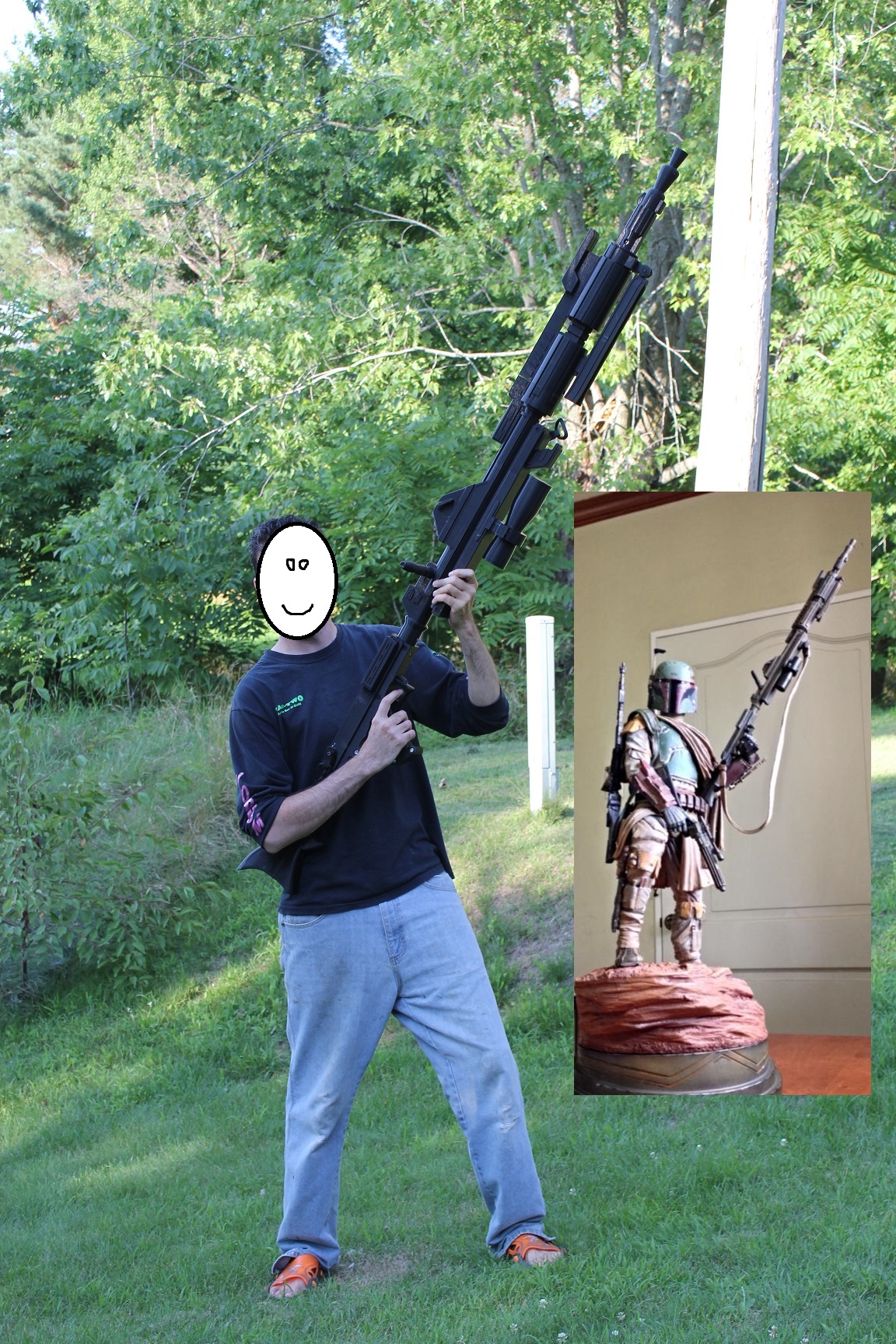 Not a lot of great references for this, so I went between pics of the statue showing just knife handle and sheath, and some concept images that of course I now can't find. 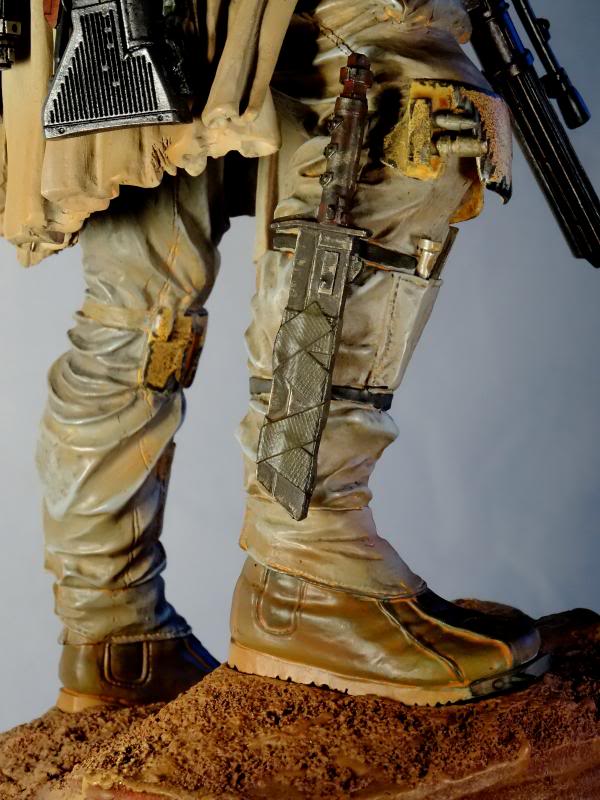 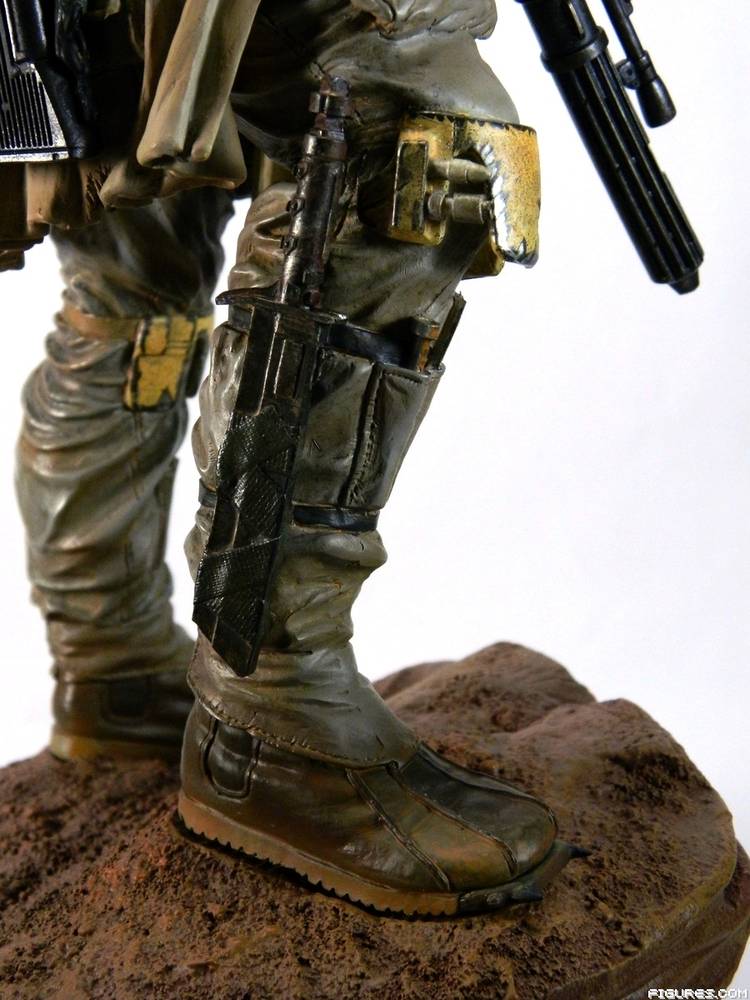 Not really necessary, but we thought having a removable blade would be a nice touch for pictures/whatever, and then (as it seems to) this evolved into also having the blade light up with some extra features. I also noticed the wrapping on the sheath. I could incorporate that into a 3d model, but really why do it when there are real-world materials that will be easier to use and also better look the part? After looking at a few types of cloth, I did just settle on the self-adhesive wrap that are pretty easy to find out there; it had an appropriate pattern, could be trimmed positioned VERY easily, and then a light brushing of resin soaks in perfect to lock the material to the sheath. Poof, done.

Soooo, first off just modeled out the blade and sheath: 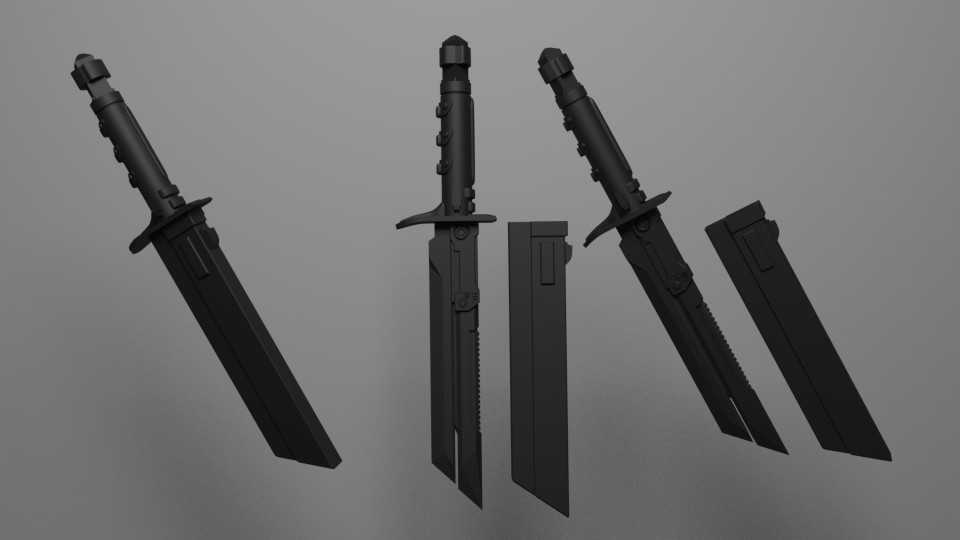 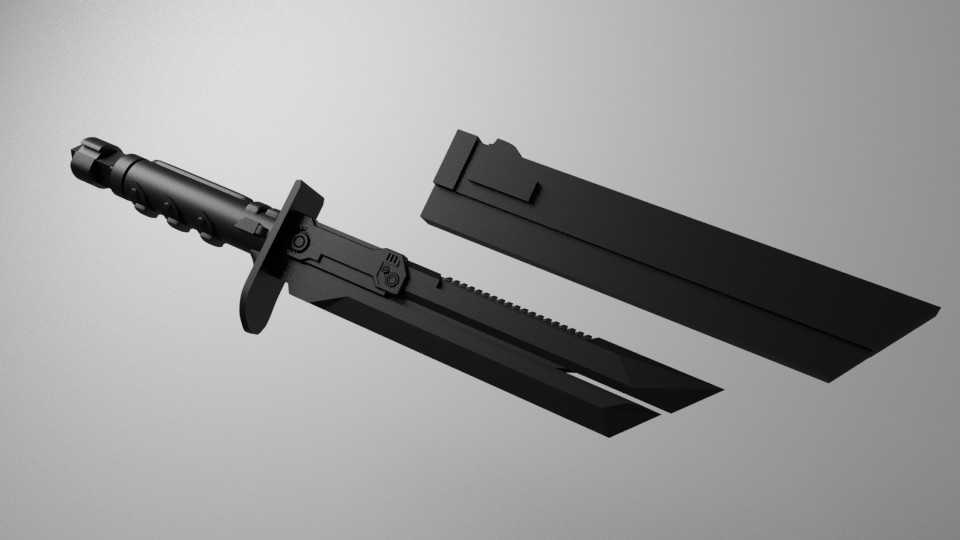 I settled on this style and design, the vibroblade is a bit of an amalgamation of ideas but it looked the part so I stuck with it. Then the idea of adding electronics came into play. Nothing crazy, but those little extra details really help to make these things have a lot more impact, and an illuminated display on a vibroblade made sense so I added it. Unfortunately I did not render any pics with the display grate added, but the idea was a 'power bar' of sorts. I also added a void in the handle for a battery and switch, along with loops for strapping on the sheath. Here's the printed prototype: 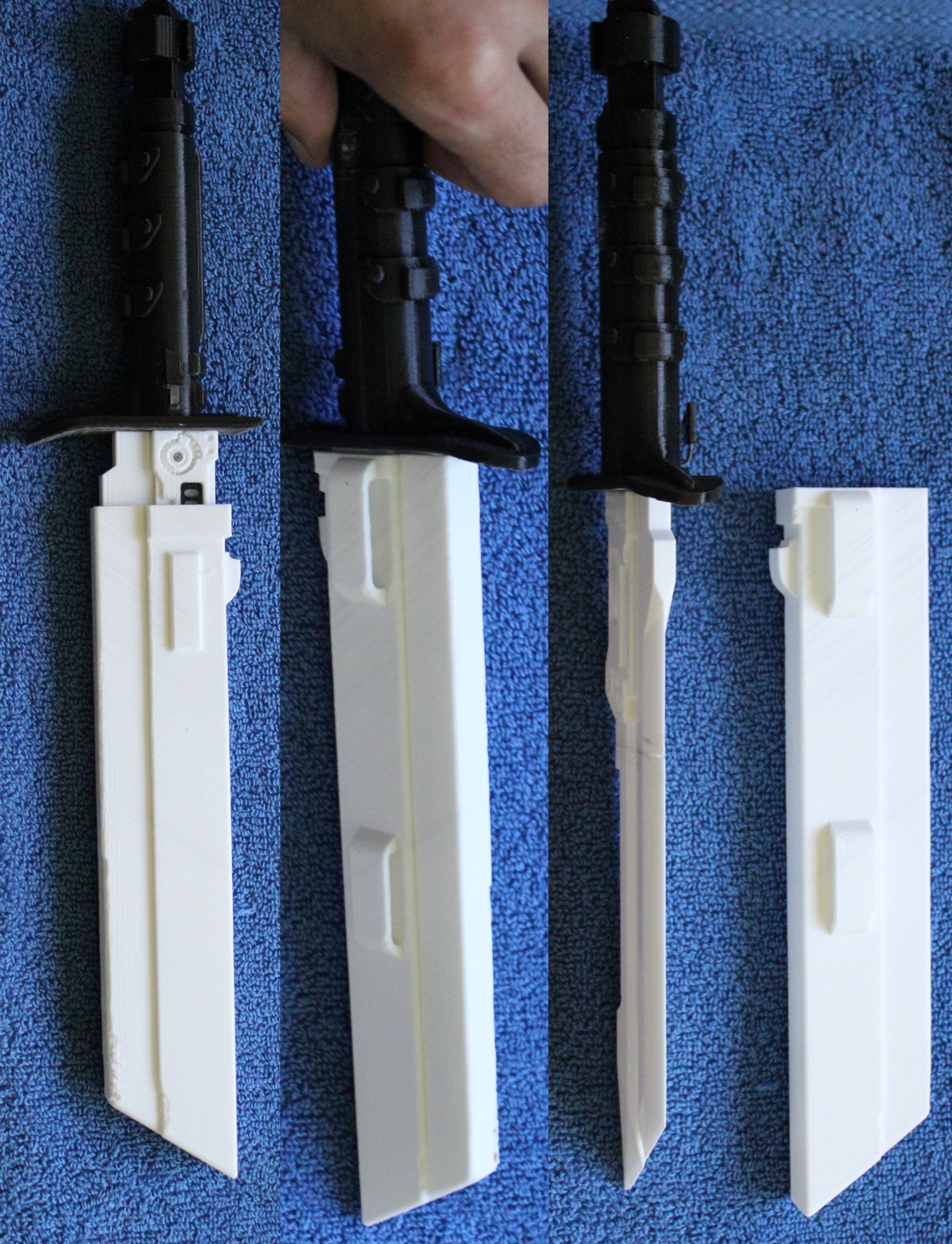 ...And a second copy with LEDs and wiring tested: 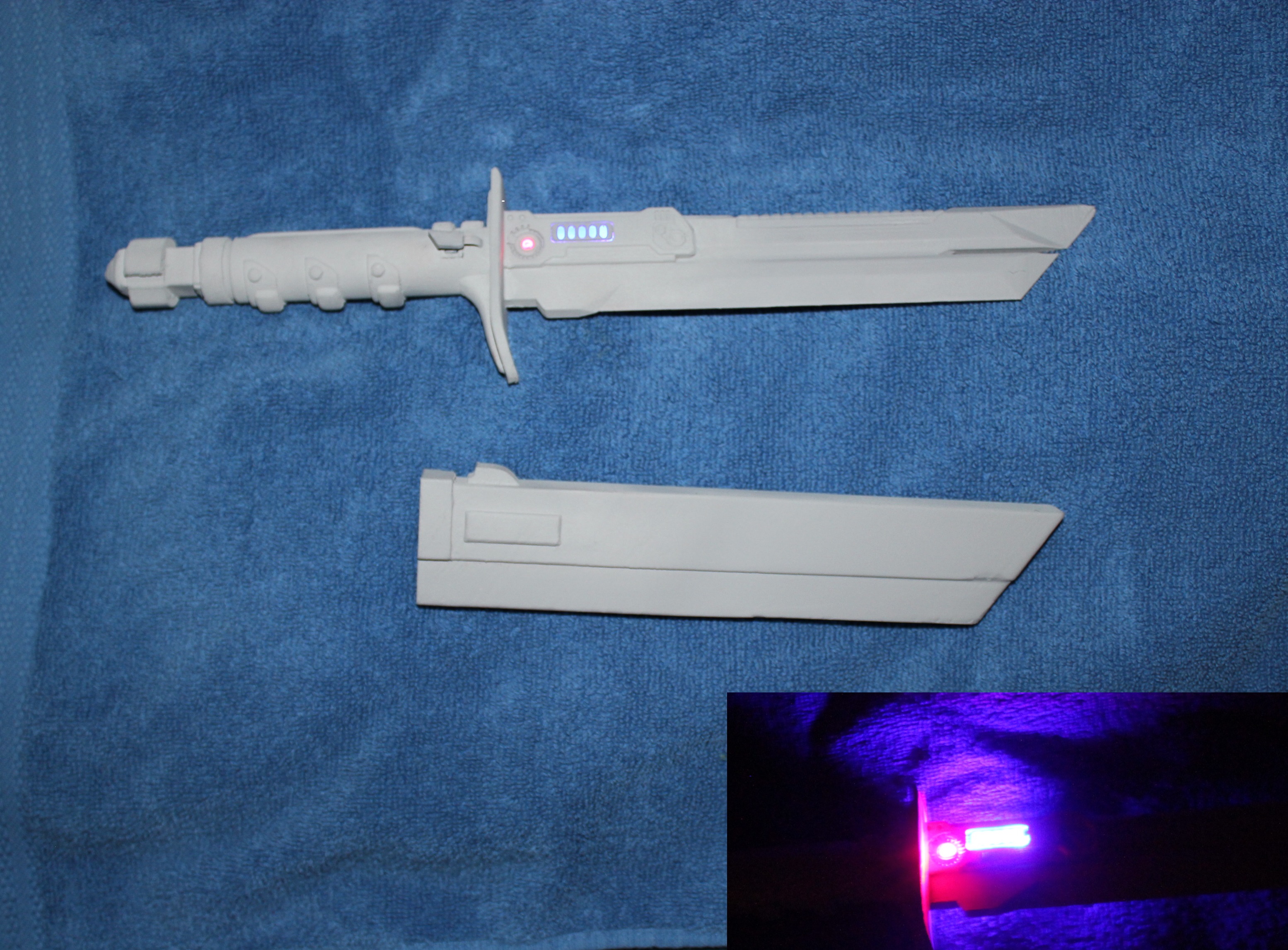 And the kit ready to go: 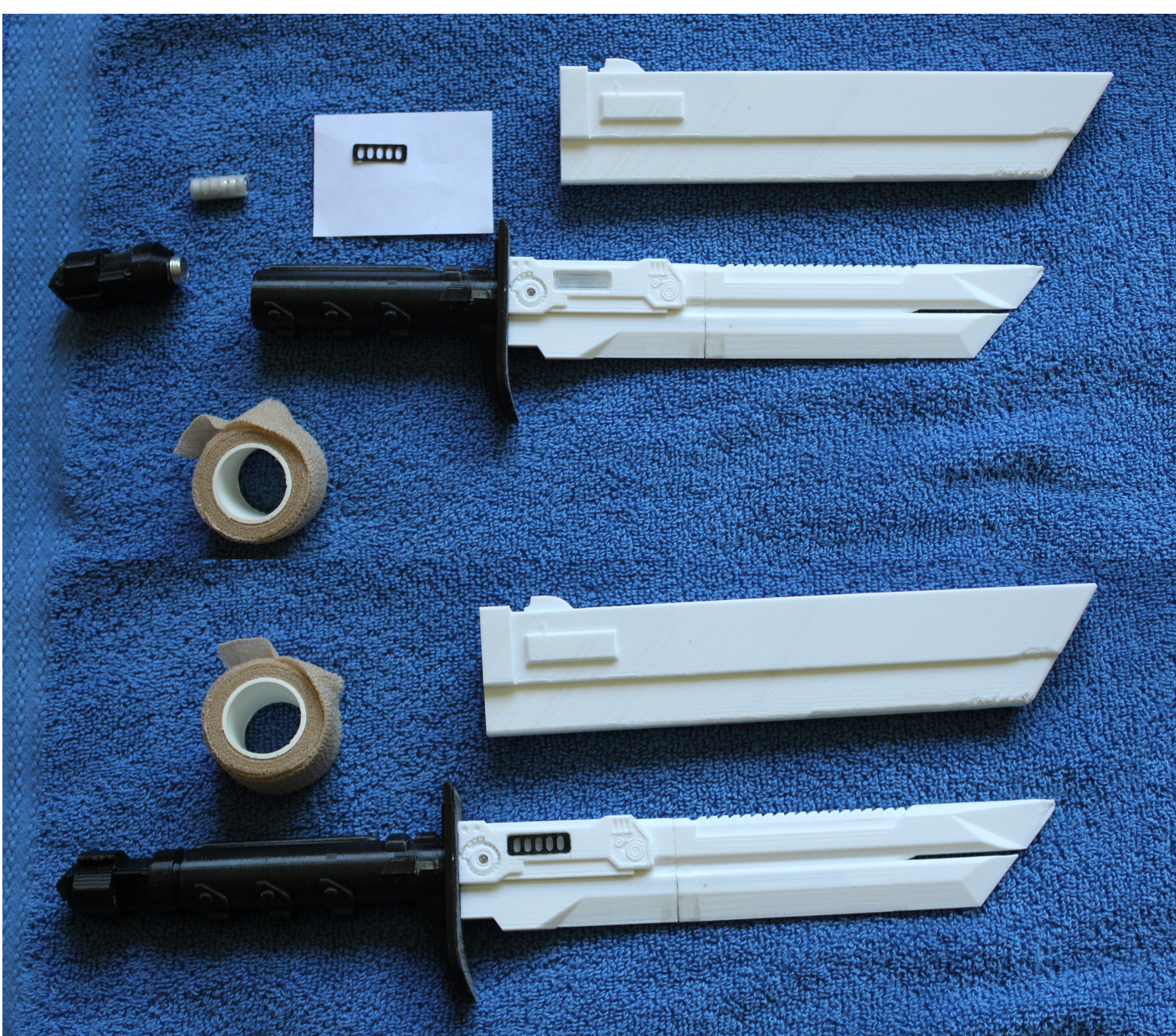 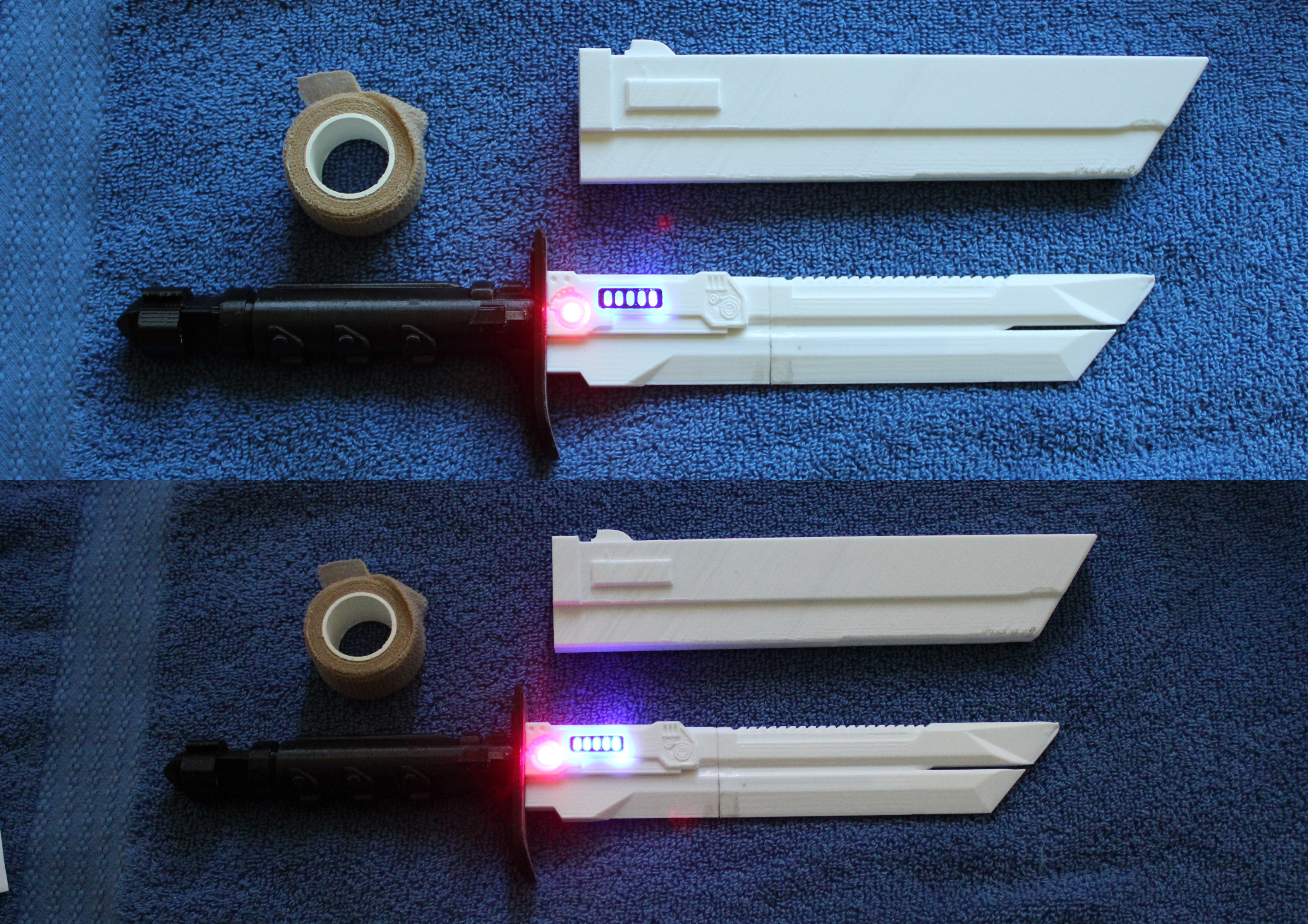 I'll see if I have any finished pics around here. Thanks for looking!

That knife kit is awesome! Will you be offering up some for sale?

BudaFett said:
That knife kit is awesome! Will you be offering up some for sale?
Click to expand...

I could if there was interest. While I love the design, this was a one-off for a customer and I'd want to re-examine my battery compartment and removable pommel before putting another kit together; I don't think the original customer even expected me to add electronics, I just added the feature because, well, why not lol.... So it ended up getting extra LEDs I had in my shop and batteries from cannibalized dollar-store reading lights Don't get me wrong, it works great, but at the least I'd like to set it up for easier-to-replace batteries, and also a screw-on pommel. The original was secure with a deep slot and neodymium magnets to hole the cap on, but it would be a hassle to somehow have it get knocked off and need a new one made. I'll take a look this evening and see if I can't just make a locking pommel with integrated switch and maybe a couple of AAAs for power?

Duuuuuuuuuuuuuude. Putting my mythos Fett vibro dagger to shame haha These pieces are incredible work. Definitely makes me want to get my own 3D printer now.......My CAD skills from undergrad are going to waste lolol

BPonist said:
Duuuuuuuuuuuuuude. Putting my mythos Fett vibro dagger to shame haha These pieces are incredible work. Definitely makes me want to get my own 3D printer now.......My CAD skills from undergrad are going to waste lolol
Click to expand...

Ha yeah just be aware the printers are addicting, ESPECIALLY if you have a cad background. I ran my first 3d printer practically 24/7 for the first 8 months, packed easily 4000 hours on it in that time. You can get a great printer ready-to-run these days for under $500
You must log in or register to reply here.
Share:
Facebook Twitter Reddit Pinterest Tumblr WhatsApp Email Link