I don't know how many bought a set of armor from Matson (he's a friend of Webcheif's). There was some discussion about Matson's knees being too big. I had those and yes, they were big. Well, I'd always felt Matson's armor was big on me, and I'm pretty average sized 5'11" but I never had any other armor for comparison until recently when I got a set of MLC armor (Thanks VashDStampede!)

Well, the difference is dramatic. Matson's armor must have been proportioned for the Big-and-Tall Fett (not that there's anything wrong with that), but for accuracy, I like the MLC armor so far. Here's a couple photos. Look how it completely covers the chest without any space around the pieces. Not only that, his shoulders, knees, chest armor and collar are all oversized as well. Then, ironically, the codpiece was extremely UNDERsized.

Mardon did an awesome job on the MLC armor. I was shocked when I got his thinking "Honey, I shrunk the armor!" But I now realize his is more accurately sized. Nice work Mardon! 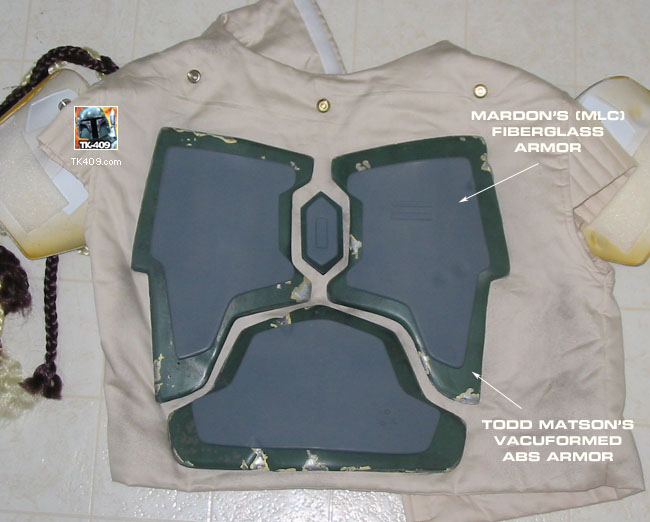 It's quite possible that he was using the "Mandalorian Blueprints" as a base for his designs. My first few sets of armor were based on that design and they were all a fair bit oversized. The size problem seems to have been just for the chest and belly plates but the knees may have been a bit large in those templates as well.

Not to poke at you, JK, but I had to cut the stuff you made for me down some too. No biggie, but it was just a tad too big.

Really? Sorry about that. I was in a slump there where the armor I was pumping out was too small. Hmmmm.... I hope it turned out OK in the end. I think yours was a size large or possibly a special template I did for myself between large and xlarge. Or, maybe I just had big chests on the brain.

TDH PREMIUM MEMBER
Glad those got there safe TK-409
Those were one of the original sets Mardon first cranked out, but I think some thought it was too small for their frame, so he made larger versions (MLC2 armor), so I guess it depends on your build.

By the way, heating fiberglass in the oven, shaping it, and putting into cold water will hold whatever shape you make it, so I got rid of that flatness.
L

By the way, heating fiberglass in the oven, shaping it, and putting into cold water will hold whatever shape you make it, so I got rid of that flatness.
Click to expand...

Are you sure that extreme temperature change will not cause the FG to crack. I was wet sanding my MLC knee armor (which was a bit cold) under warm water and it cracked. I endup reinforcing with aluminum and FG.

I would be careful just in case.

I agree the MLC armour is fantastic, i'm not sure which version I got (didn't know there was more than one :confused )but it fits me a treat (6' medium build)

which set of armor are you wearing in the picture TK409?

Yeah I love my MLC stuff as well, It fitts my frame perfecly, and its really great quality I was checking the size compared to my lifesize pre-pro carboasrd stand-up the other day, and the size & proportions are nearly dead on!!! I like the knees and cod especially!!! With the new MLC cod, I can actually sit down comfortably, couldn't even bend over in my old MB cod
Damian


Slowmo wrote:
which set of armor are you wearing in the picture TK409?
Click to expand...

I'm wearing the Matson armor in that Vegas photo.

That is a great improvement. Just curious what is the measurements of the matson and MLC armor? I am a bigger guy so I am curious to see how big my armor is compared to others. I make mine at 10 1/4" long and 8" wide to fit my frame.
Last edited by a moderator: Jul 25, 2017


Forced Trekker wrote:
Not to poke at you, JK, but I had to cut the stuff you made for me down some too. No biggie, but it was just a tad too big.
Click to expand...

JK - I'm a fairly small framed guy, so I ended up taking about 1" off of the knees and triming the back plate down quite a bit. But like I said, its all good. I rather have it too big and be able to cut it down than too small (which was the problem I had with my first set).

Yes, I made 2 sizes for chest armors....but the first one (smaller one) was not sold out, but merely given away for free to those who bought MLC Jet Packs as a promo before (sorry, but that promo ended)

I guess my initial studies was to have those guys critique the first chest armors I made before going head-on with the manufacture of the rest of the armors.
Sorry if some of you had to be guinea pigs...but heck, it was free!

Yes, it was a tad too small...but I'm surprised that we still get nibbles of those smaller chest armors for our smaller Mandalorian brothers & sisters....yes, sisters!

Overall critiques suggests that it was a bit small for the majority of Fetts (5'10" and up), thus I made a new set of chest armors....or "MLC2 chest armors" (for the lack of a better name)

The MLC2 chest armors was created not only a bit bigger, but in a different platform as well. The upper chest pieces had a lesser curvature compared to the stomach plate which curves bigger. Not only was this "anatomically" correct, but the fangs (Mandibles?) of the 2 end chest armors conforms as well to the bigger curvature of the stomach plate.
To those who have the MLC2 chest armors - you'll notice that the 2 end armors have 2 curvatures..." a bit "twisted" if you will. This is already incorporated in the molds

Oh...and while I'm here and not to hijack this thread, but if anyone of you have/had any problems with our FG knee pieces cracking...please give me a buzz so i could alert my prop workers to reinforce that specific part on the knee that needs attention. I never got any feedbacks from both Rex & Si on these, so thought they were okay. But if there is a problem, kindly alert me on those so we could improve our wares

The bigger MLC2 chest armors has indentions on the left side armor specifically for the LED chest lights which Si Rees (Han Hunter)is marketing.....I'm not so sure if its the standard size, but i think it is. I believe he compared all sizes of Fett chest lights & we came about to that measurement.

As you can see, we didnt cut out the indention on the chest lights so that if you have smaller LEDs, then you can cut a smaller pattern....if its bigger, then no problem as well
The indentions would help you out in positioning your preffered chest lights

Well, looks like I'll be getting the MLC2 armor, so, for those of you Fetts under say, 5'8" this set is painted up and ready to head to the Cargo Hold.... 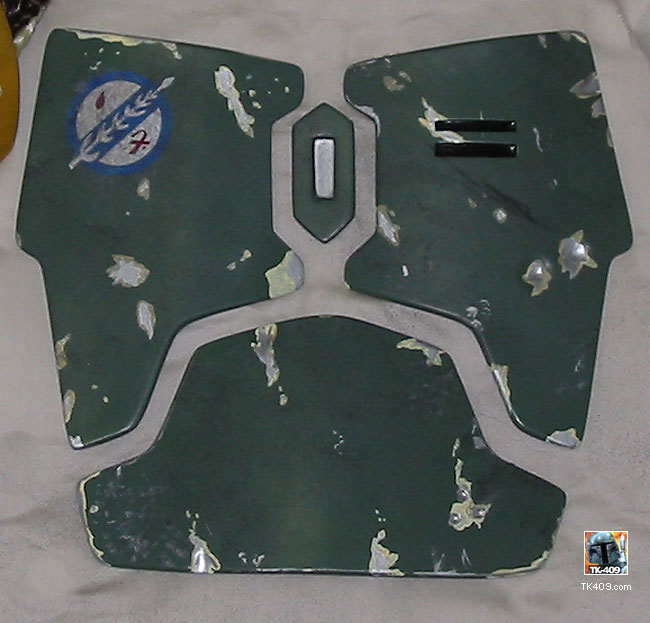 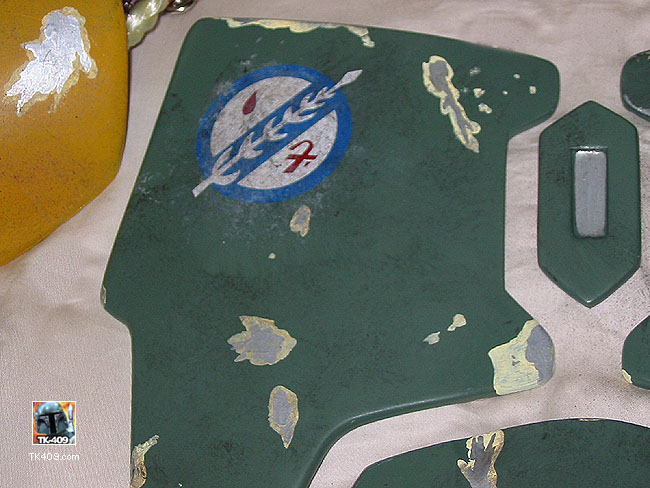 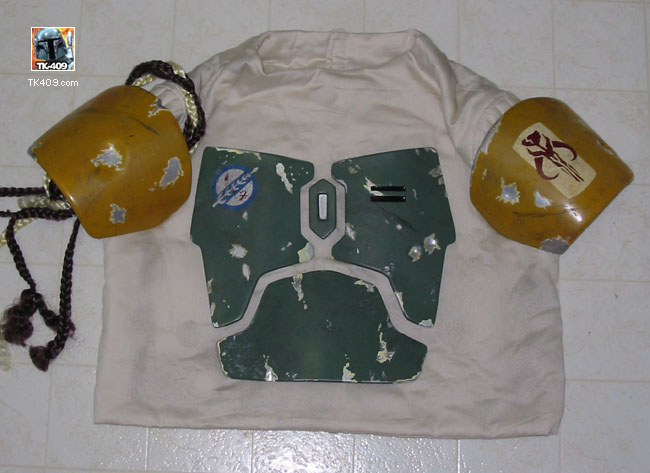