As requested by ... someone (sorry can't remember who)
How I made my rotary minigun

(These posts are snagged from another forum I post on, so if I miss some pieces in copy&past please forgive me.)

OK, so I got bored waiting for various bits of armour to arrive for my costumes, so I turned my talents to weaponry, and figured I'd try the Merr-Sonn Repeating Blaster thingumy. 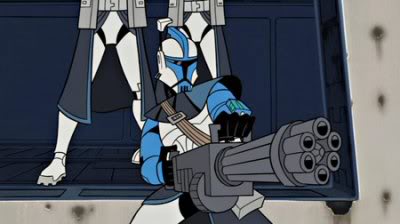 So, I removed a ton of projects from my worktop and started ...

Gorram it things aren't going as planned.
Mainly cos I wanted to be a flashy git and have the barrels all spinny.

So, I took the cordless drill apart, removed the motor, switch and battery, and unsoldered the wiring connecting those parts. (red drill pictured isn't the drill I carved up, I forgot to take a 'before' pic of that drill)
I then cut the case into three pieces: Motor, Battery clip, offcuts

This left me with some bits that looked like this:

Next, I picked up the Soil pipe and glued one of the wall brackets onto the front end.
This bracket will be bolted to the foregrip.

Then (just to see how it would look) I slid on the rear mounting bracket (this will hold the reargrip - which will probably be a disassembled joystick), and then the leafguard/drill motor assembly.

Still doesn't look like much yet, but I can't do much more til the barrels are done, so ...

Moving onto the plywood, I drew out four circles of 70mm dia, and one of 60mm dia.
The smaller disk, when cut, will house a bearing, and sit in the soil pipe.
The larger disks will act as the spacers for the gun's barrels.
So, I drew a smaller, 49mm, circle concentric with the 70mm ones, then marked around the circumference ofthe smaller circle six equidistant spots. These will be the centers of the holes I drill for the barrels to pass through.

Motor Unit
I've fashioned (very roughly so far) a handle for the foregrip out of mahogany (we had a lump lying around not being used so ...), and roughly worked out where the switch needs to go (a PC joystick won't take the juice the battery supplies)


The Barrels:
I've cut two spacer disks out of the plywood, and drilled a 10mm hole in thee center to accept the spindle, and 6 x 22mm holes to accept the 'barrel'.
One further disk only has the spindle hole cut - this will be the back end of the spinning section.
From two lengths of 22mm overflow tubing, I have cut 6 strips each 22" in length (incedentally this is the standard barrel length of the M134 Minigun)
The plywood disks have been sanded smooth, and one spacer disk has been glued to the blank disk

To see how it will all go together, I have tentatively married it all up just for looks.

I'm still waiting for the aluminium spindle to arrive, but seeing as that's the last part of the jigsaw I'm not that bothered yet.

Now I know it all looks cool, I've taken the barrel apart again to primer the spacer disks. (I'll topcoat them when I have the barrel put together properly)

While the paint dries on the spacers, I can look at tidying the foregrip, maybe getting a better handle, find a non-functioning joystick to make the reargrip out of, fashion a spacer to help keep the motor in place, and work out where the hell I'm going to put the battery (that'll be the hardest part I think)
That's now as far as I've got with this.

Managed to get a little more work done today.

The bearing disc is complete and in place in the soil pipe, and is waiting the bearing to be glued in place.

Two holes have been drilled near the forehandle to accept the wires for the switch.
Cable has been fed through these holes.

A hole has been drilled on the side of the soilpipe and a wire fed through it. This will attach to the battery.

The switch has been connected to the wires, and just needs to be secured in place.
(This'll be done when the foregrip has been smoothed, shaped and painted)

The spacers for the barrels have been primered and sanded.
The barrel pipes have been lightly sanded and await primering.
I've run out of primer now.

Oh, and the spindle arrived today too...


Small setbacks:
The mahogany handle shattered when I dropped it (while shaping it to a more comfortable form).
The drill motor turns inside the pipe, causing the wires to tangle.

I have made a new handle out of what looks like maccano (metal strips with holes in from B+Q, I think it's for mending wooden things, but hey .. who cares).
Because this isn't all that comfortable to hold. I've wrapped it in pipe lagging.
However, I now need to make the wires that connect to the on/off switch longer to fit the size of the new handle (I can also ide the wires under the pipe lagging.
Once that's done I can wrap the pipe lagging in some black suede or something.

I managed to find a cheap flight stick (from a PS2 as it happens) at my local 2nd hand games store ... for a whopping £2.
So I now have the rear grip sorted.

And here's a video of the barrels spinning up

Mate that is awesome!

Would you be able to post some further info for those whose knowledge of electronics and wiring is crap?!

Keep up the great work!

My knowledge of electronics is crap.

When I unwired it all, I made a not of which was black, and which was red, and just wired it up Black to black and red to red.
It really was very simple.
I didin't need to mess with any of the complex wiring inside the motor or the switch.

Cool, thanks for the update. Its great to see such an inventive use of everyday stuff!
8)

Wish I could take credit for the inventiveness, but sadly it's someone else's core idea.
I just jumped on it cos it was soooo cool.

At least you had the motivation to crack on with it! Good work!

That is a fantastic tutorial!!!

Yay, just as I was about to start on mine, I knew there was somthing I overlooked, where did you get hold of the bearing?

Ello Broz!
Stormdancer's got a lot to answer for eh?

Got it from Ebay
http://cgi.ebay.co.uk/HOFFMANN-BEAR...yZ112399QQssPageNameZWDVWQQrdZ1QQcmdZViewItem

Got the 10mm Aluminium spindle from ebay too
http://cgi.ebay.co.uk/Aluminium-Rod...ryZ98641QQssPageNameZWDVWQQrdZ1QQcmdZViewItem
B

Indeed he does, nothing like a trailblazer to get you off your arse and doing stuff.

Ebay, how bloody useful, never occured to me to look there.

Luckily Nigel (Connor Armstong) is getting me a bearing from RS and spindle from his metal pile, so it should make next SGUK.

After that I'm going to start on the custom Mando (amoung other things) having learnt some pointed lessons about the value of forward planning...

Cool
Good to see another Mando fan beginning the good work.
That'll be 2 miniguns at UKGC in a couple of weeks.
D

Hey bro, this looks wicked sick man. Something you may want to consider is that many miniguns have a guiding shaft down the middle, you can actually see the little cone comming off of it in that clone picture in your signature.

Just wondering, where have you got the ammo drum/ big-ole-battery for this? are you gona wire it into your backpack? (speaking from a SW continuity, that drill idea is pure genius)
B

Well, mine's almost done, just need to do the mountings and wiring, then sort out the backpack (into which i will be storing the battery.) The cable housing for the feed chute has failed to materialise so I'll have to settle for exposed 7.62 belt, ho hum...