Let my first words in this thread pay tribute to wizardofflight. Without his templates, I would not be attempting this. If my bucket turns out well, it's thanks to him, if it turns out like crap, then it's my fault.

I was waiting to start this thread until I had some pics to post, but I haven't had time to download them off my camera. I also didn't get as far as I had hoped last weekend. All I was able to do is cut the pieces out of the sintra sheet.

Last night I was grilling some steaks and I was looking at the grill and thinking about my bucket and.... you guessed it:

I grilled the bigger sintra pieces to heat them up to start shaping them.

Worked liked a charm, although I don't recommend actually placing them on the grill. Just hold it over the heat and bend it. I did lay one piece on the warming rack above the main grill and that left some grill marks, but it's where the keyhole slots are going to end up being anyway.

Here is a summary of my efforts thus far:

Cant wait to see it!
J

Here are some pics finally...

The prize rescued from the dumpster: 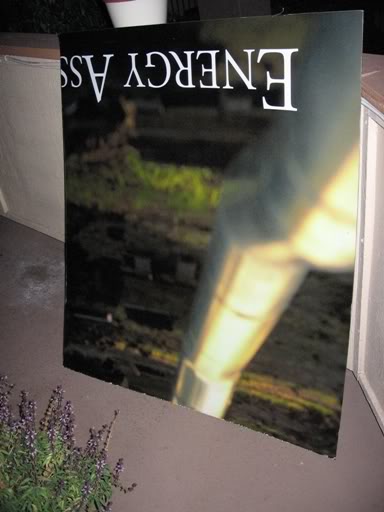 Templates laid out and traced:

Pieces I cut and then shaped with the BBQ: 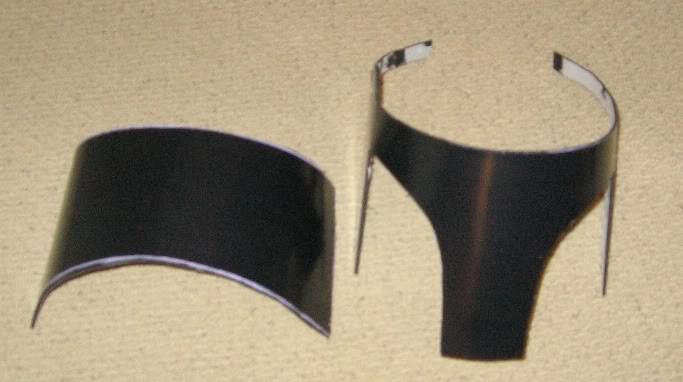 In the above pics you can see how I taped the "inside surface" template together in the back and then cut it where it goes behind the ears so that it won't have a seam in the back.

Its looking great so far, the shape looks awsome. Keep it up, and your gonna have a great helmet soon. Show us more!

After a couple hours of sanding and using "Goo Gone" I was finally able to get the spray adhesive backing off of the inside surface of the helmet front to prepare it for gluing.

Anyway, I glued the front and back together last night. I tried superglue because it tested super strong. If you look in the one pic you can see where I cut the corner off the sheet and glued it face to face. The bond was strong enough to pick up the entire sheet off the ground without breaking.

Unfortunately, it's really hard to use it over a large surface. The result was a strong bond in just a few spots and lots of visible gaps. So, I tried epoxy on the other side and that worked better, but even after curing overnight it feels like I could break the bond with just a little force.

I'm going to Home Depot at lunch today to pick up some PVC pipe cement and give that a try. I want something that is going to effectively laminate the "trim" to the rest of the helmet so that I can eventually sand it down for that nice rounded edge appearance. I will take pics of my progress this weekend although I don't expect to get to the dome at all.

I also found a really exhaustive guide to working with Sintra. Enjoy:

http://www.piedmontplastics.com/static/literature/Alcan-Sintra How To Manual.pdf
N

I got a good chuckle out of the sign...my only question is does it break the new profanity rule? 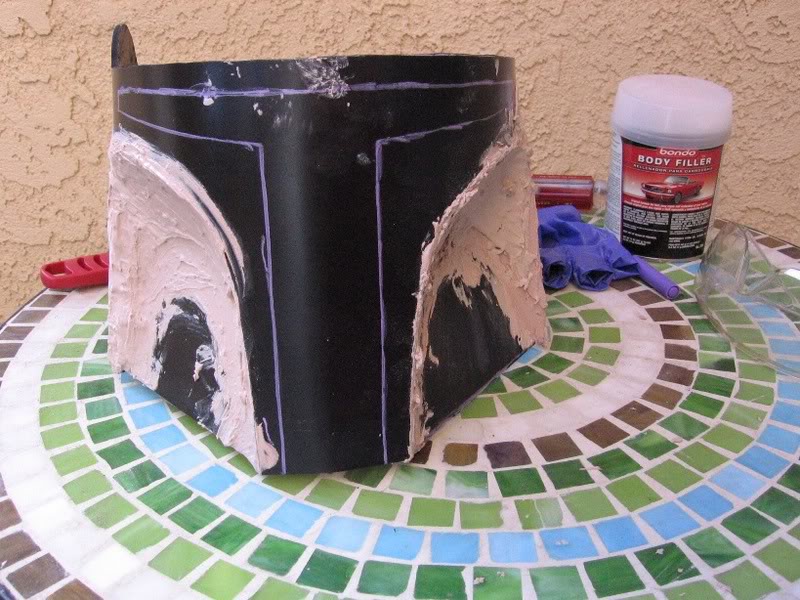 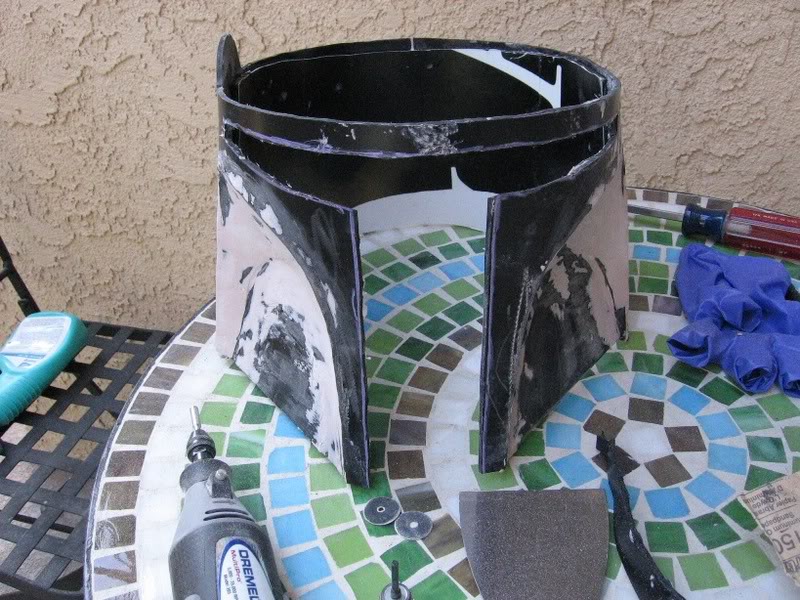 I had a lot of trouble with the gluing the cheeks and finally got impatient and just gooped them up with Bondo really thick. It looks nice on the outside, but the inside is pretty ugly.

I then ran into some problems with the bondo "cracking" away from the joints with the sintra where it meets the T-visor. This was finally solved last night after I learned a great trick for pouring baking soda on top of super glue. It makes the superglue cure right away and also makes a filler for cracks. I also reinforced the joints with epoxy on the inside.

Looking great so far. As what they say, "its the outside that counts..." or is it the other way around? Awell, dosnt matter too much. Keep it up!! You know when you did an outstanding job when you pass out from the epoxy fumes! Like I did at one point....Thats another story for another day...

Great work so far. Always amazed by what some people can do with some inexpensive materials, creativity and determination.

I always bought a thick, gap filling CA glue and sprayed it with the instant set.
J

Jango newbie said:
I always bought a thick, gap filling CA glue and sprayed it with the instant set.
Click to expand...

*Plus or minus 30% depending on where you shop
G

I am very surprised at how well you got the cheek area cleaned up and smoothed out!! That's a great looking helmet What will you be using for the dome?

joshcube said:
This was finally solved last night after I learned a great trick for pouring baking soda on top of super glue. It makes the superglue cure right away and also makes a filler for cracks. I also reinforced the joints with epoxy on the inside.
Click to expand...

Can you explain this in a little more detail? Are you saying you mix super glue and baking soda as a gap filler? Does it sand ok?
J

GCNgamer128 said:
I am very surprised at how well you got the cheek area cleaned up and smoothed out!! That's a great looking helmet What will you be using for the dome?
Click to expand...

:confused I don't know yet... I'm keeping my eyes peeled for a hardhat laying by the side of the road during my commute to and from work. I will probably end up doing it with strips of Sintra.


kibosh said:
Can you explain this in a little more detail? Are you saying you mix super glue and baking soda as a gap filler? Does it sand ok?
Click to expand...

Well, I found two conflicting sites. One said that you mix first and have to work fast. Another said to just pour the baking soda on after applying. I went for the pouring on after and it set instantly. Both sites claim that it's sandable. I'd post links, but you have to read a bunch of unrelated stuff to find it. Better to just do a google search.
A

I like what you got going there. I think I will definitely attempt my own after I am finished with my current project. Definitely impressed with the cheek areas.

Thanks for all the encouragement guys!

Okay, I went to "Play it Again Sports" (used sports equipment store) and all their batting helmets were 50% off. Prices ranged from 7.99 to 29.99, so of course I bought a $7.99 helmet that cost me $4.30 with the discount and tax. It was an adult size (6 1/2 to 7 1/2) and after I tore out the padding and cut the visor and ear guards off it was darn near the perfect size. I only had to cut it in half front to back to make it fit. A few sizes bigger would probably work without any modification.

It glued up nice with good old super glue (also used the baking soda trick to fill a couple gaps) and then I bondo'd the gap in the middle. I didn't have time to shape it, but I will soon.

I know a ton of people have said this, but it's really true that you have no idea how big this helmet is until you see it in person. With the dome on, it's huge! But I know i got the dimensions vaguely right because with just an inch or so of padding, my eyes center up perfectly in the T-visor area.

I took progress pics, but they are still on my camera. I'll probably get them posted in a couple days.
N

looking good so far. I like the idea of the superglue and baking soda. can't wait to see more pics.
J 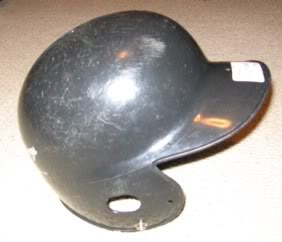 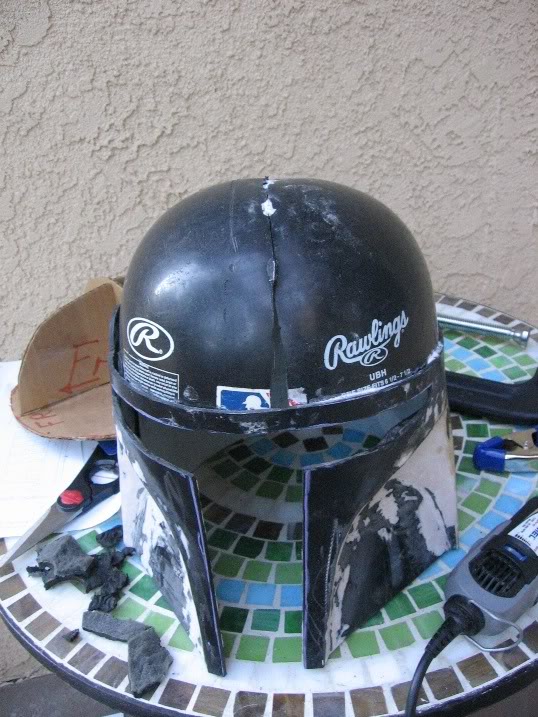 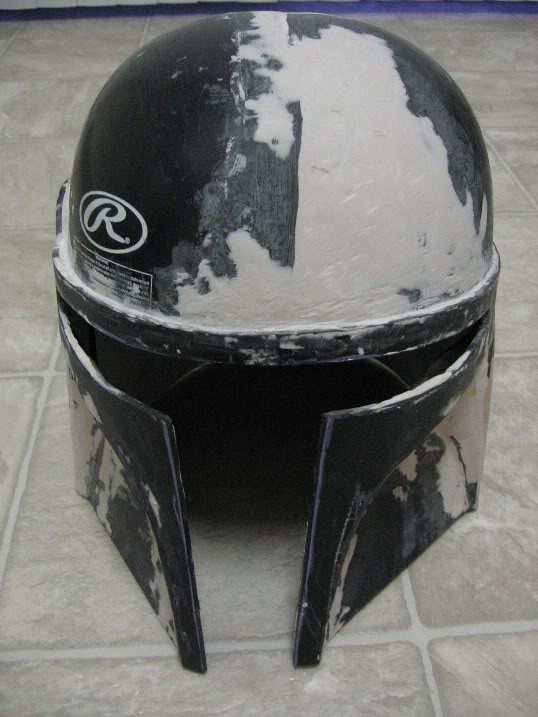 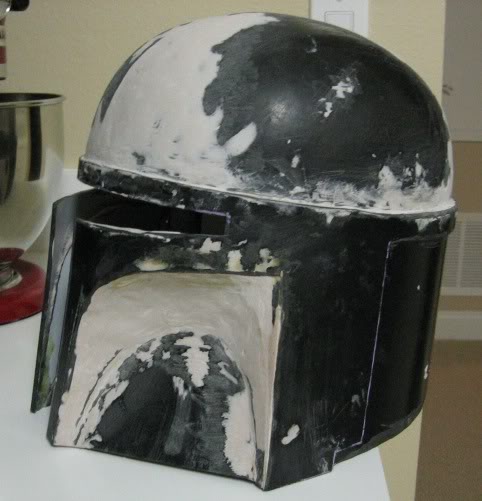 Detail showing how I tapered the bottom: 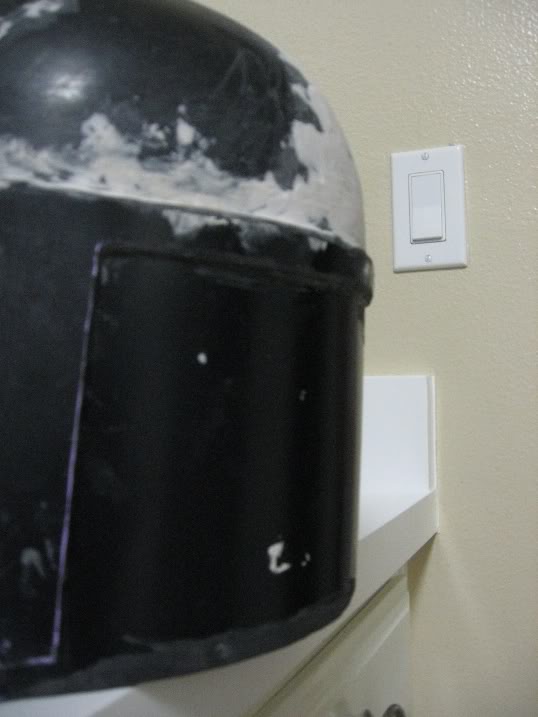 From the side view pic I was thinking that the T Visor slit is too wide, but the more I look at it, the more I think I need to extend the slit out a little bit more (which will also make it come to a narrower corner). What do you guys think?

all these scratchbuild helmets make me want to you guessed it....make another helmet