TDH PREMIUM MEMBER
Hi All! This will be the first thread I've posted here on the TDH - and also my first (documented) step towards various Boba-related props I'm hoping to complete. The basis for this build is a "Bookie Bronze" ESB EE-3 Kit I was fortunate enough to acquire from a member on the RPF site at the very end of 2021. And by the "very end" I mean it showed up at my house on December 31st! 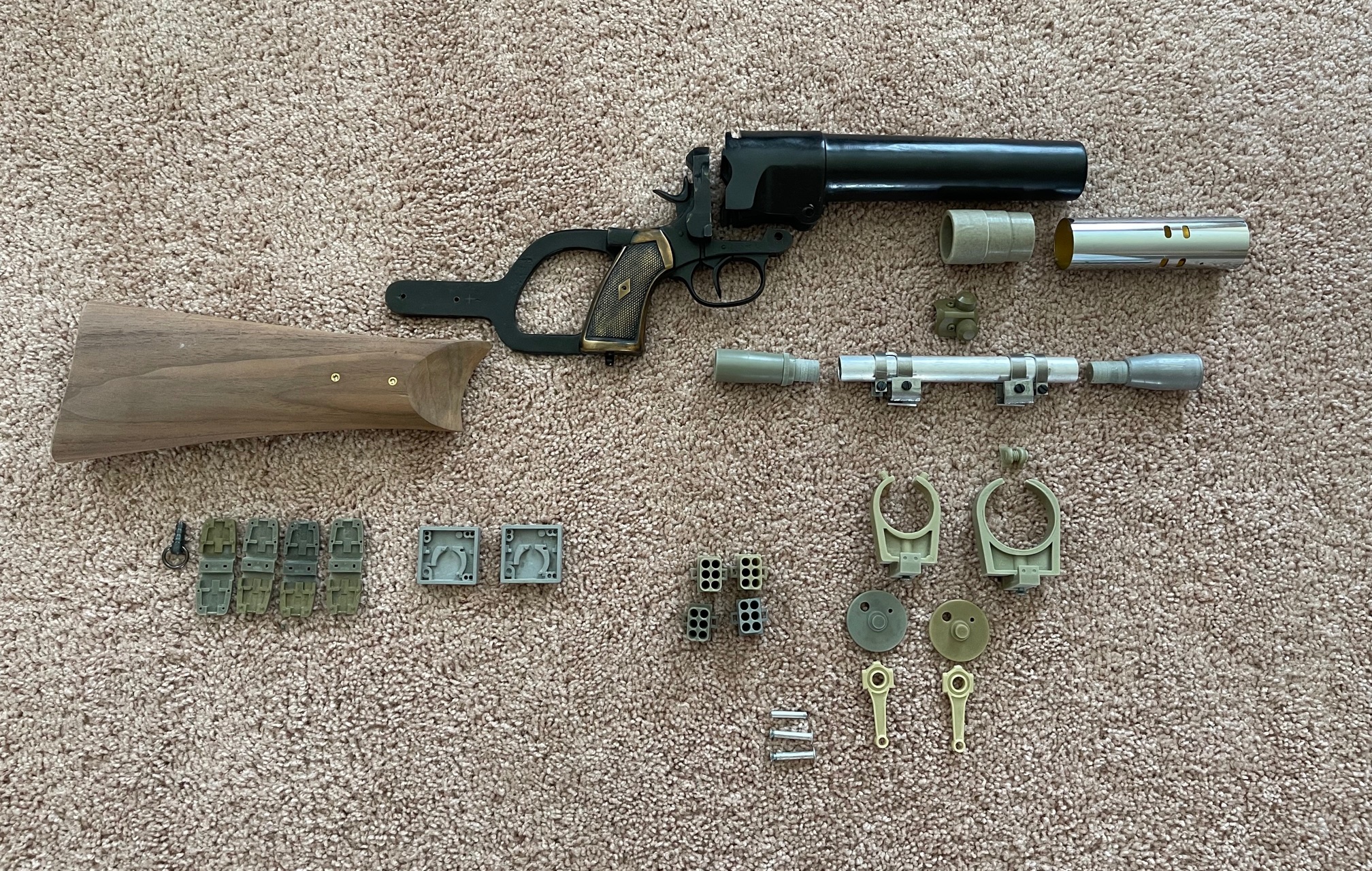 ... and I was then blessed by God to obtain this Hunter 4x20 scope for an amazingly low price (even shipped from across the pond)!

While I have begun the build and have additional pictures to add in a bit, can anyone help me identify the part below and/or where it would be used? I'm sure it's probably something very apparent but it has me stumped. 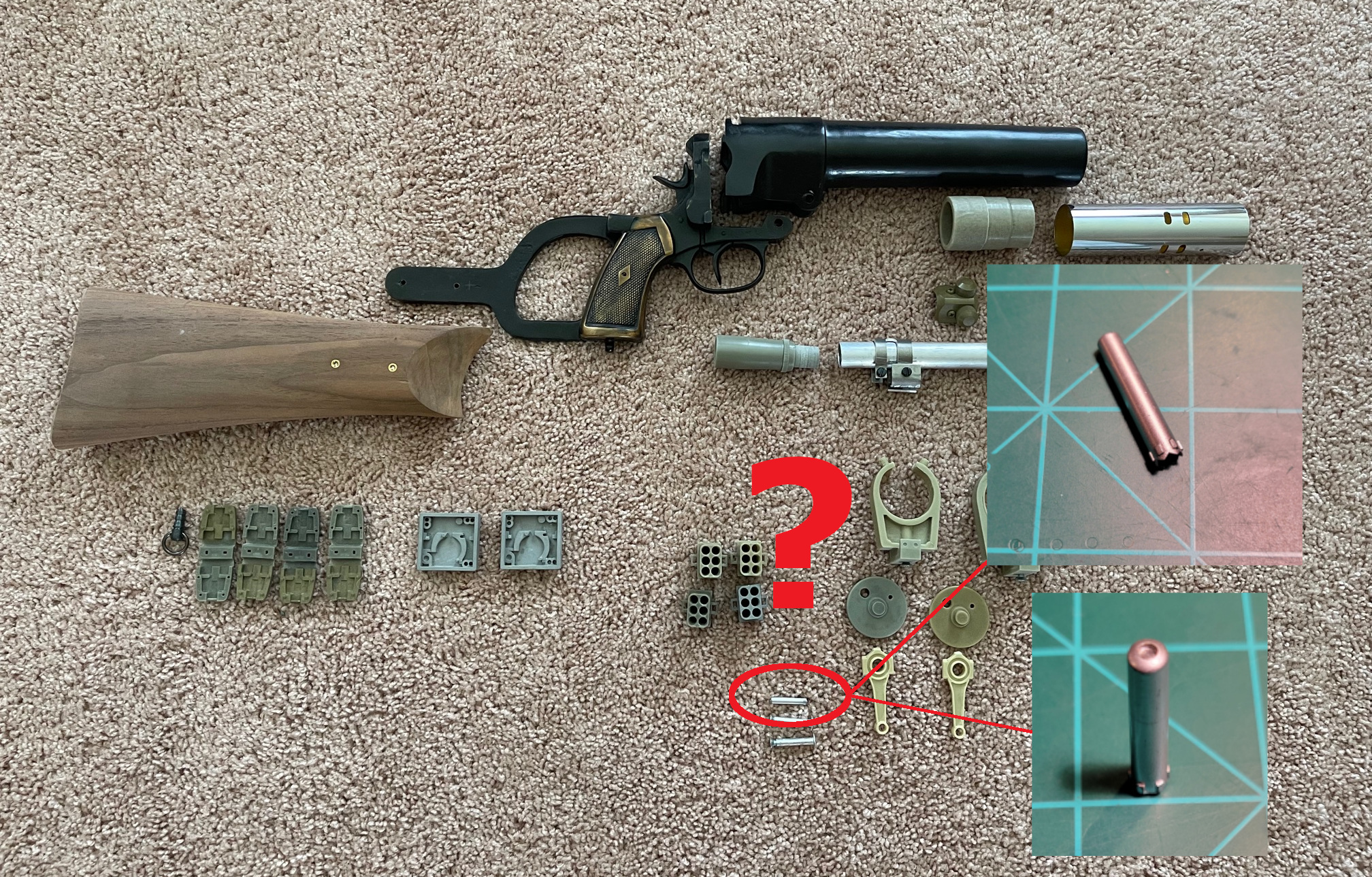 TDH PREMIUM MEMBER
I don't believe they are unless someone has seen something I haven't...

BudaFett said:
I don't believe they are unless someone has seen something I haven't...
Click to expand...

Thank you, BudaFett. I'm going to put them to the side and proceed w/ the build.

First on the chopping block was the stock - and after stumbling upon the Missing Chunk post by ConvergenceProp, I knew I would incorporate that feature into my build. 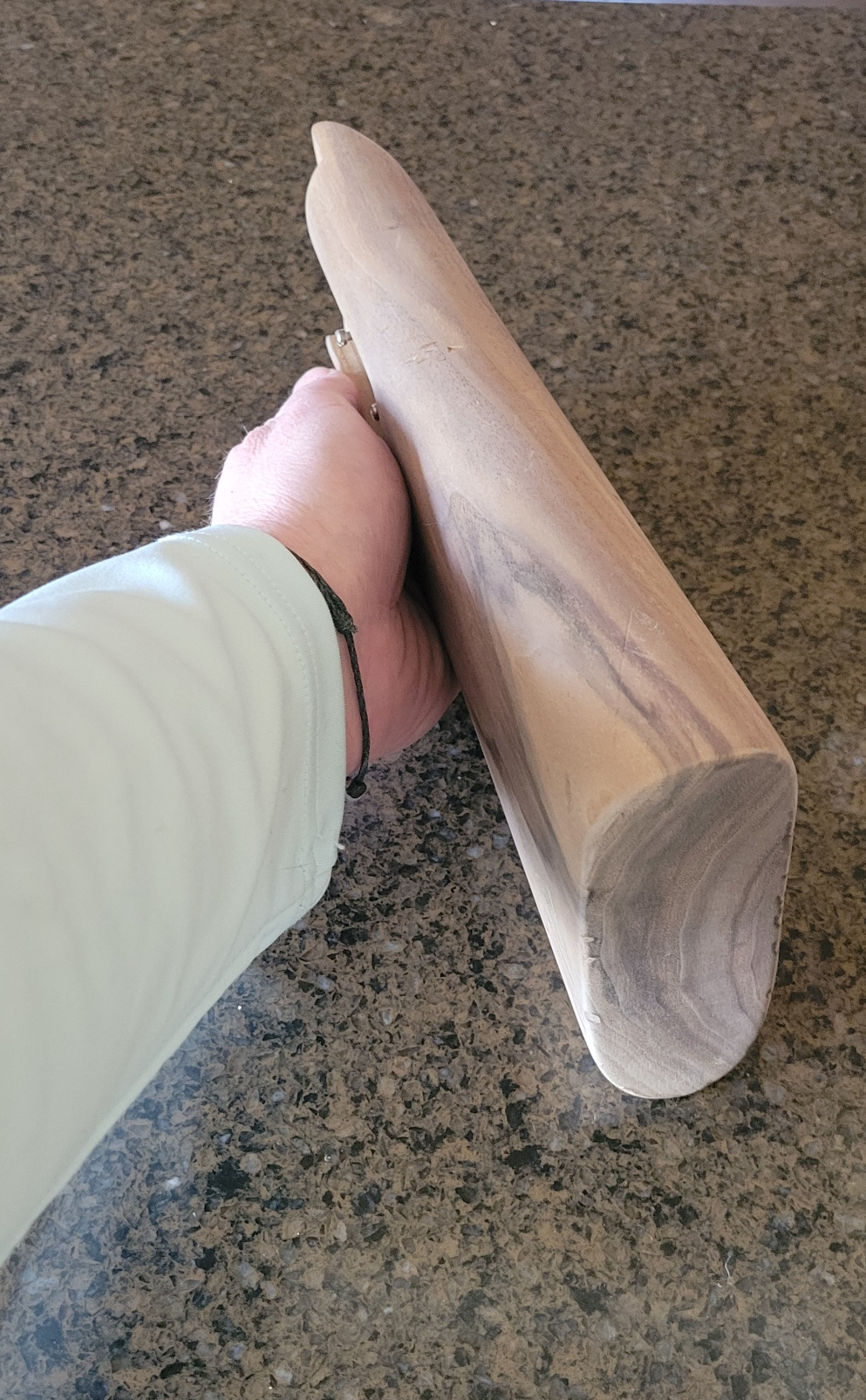 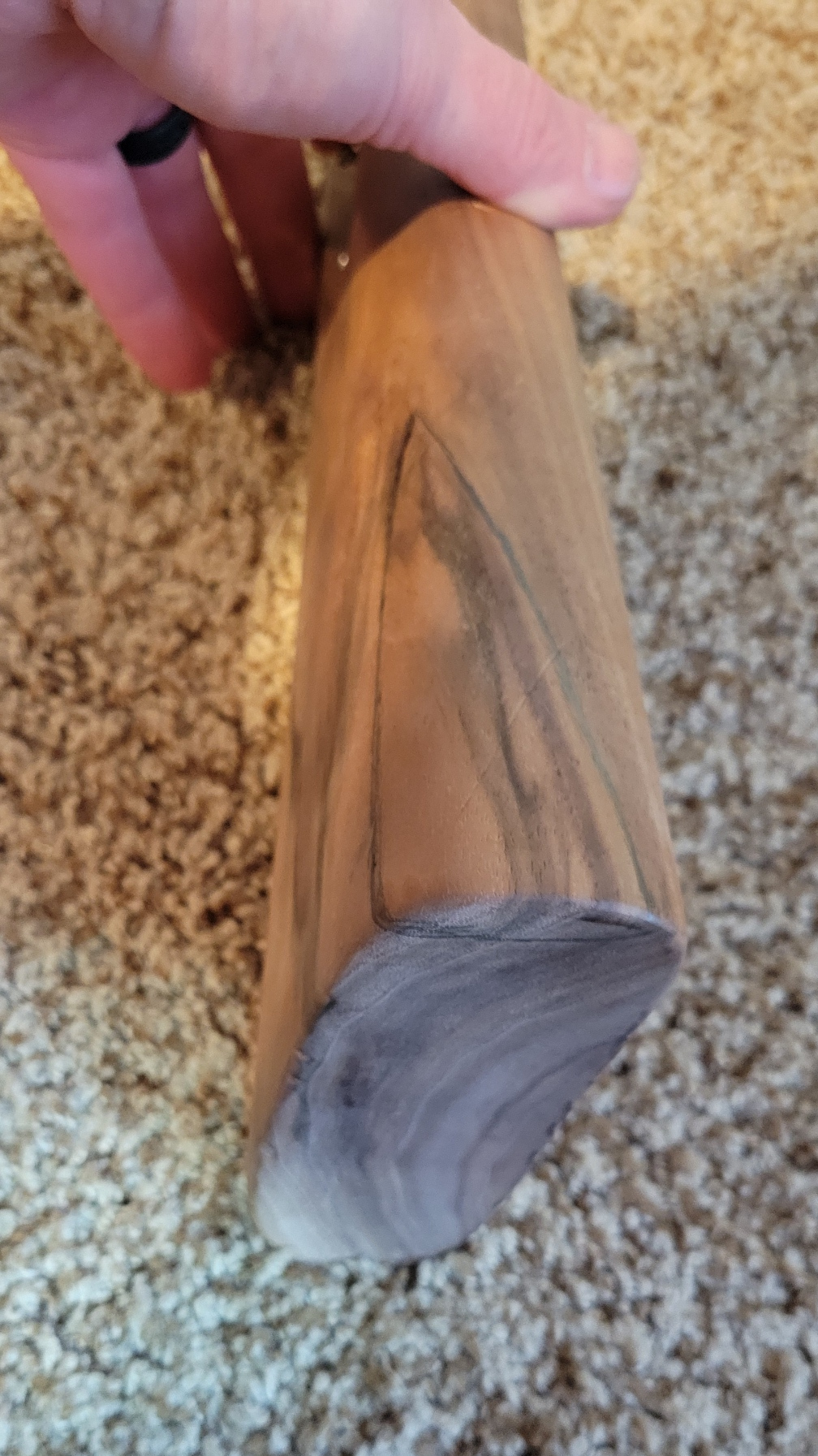 After completing the initial round of carving , I elected to give the entire stock a flame treatment (attempting to emulate the color variance of the Hero version) ... 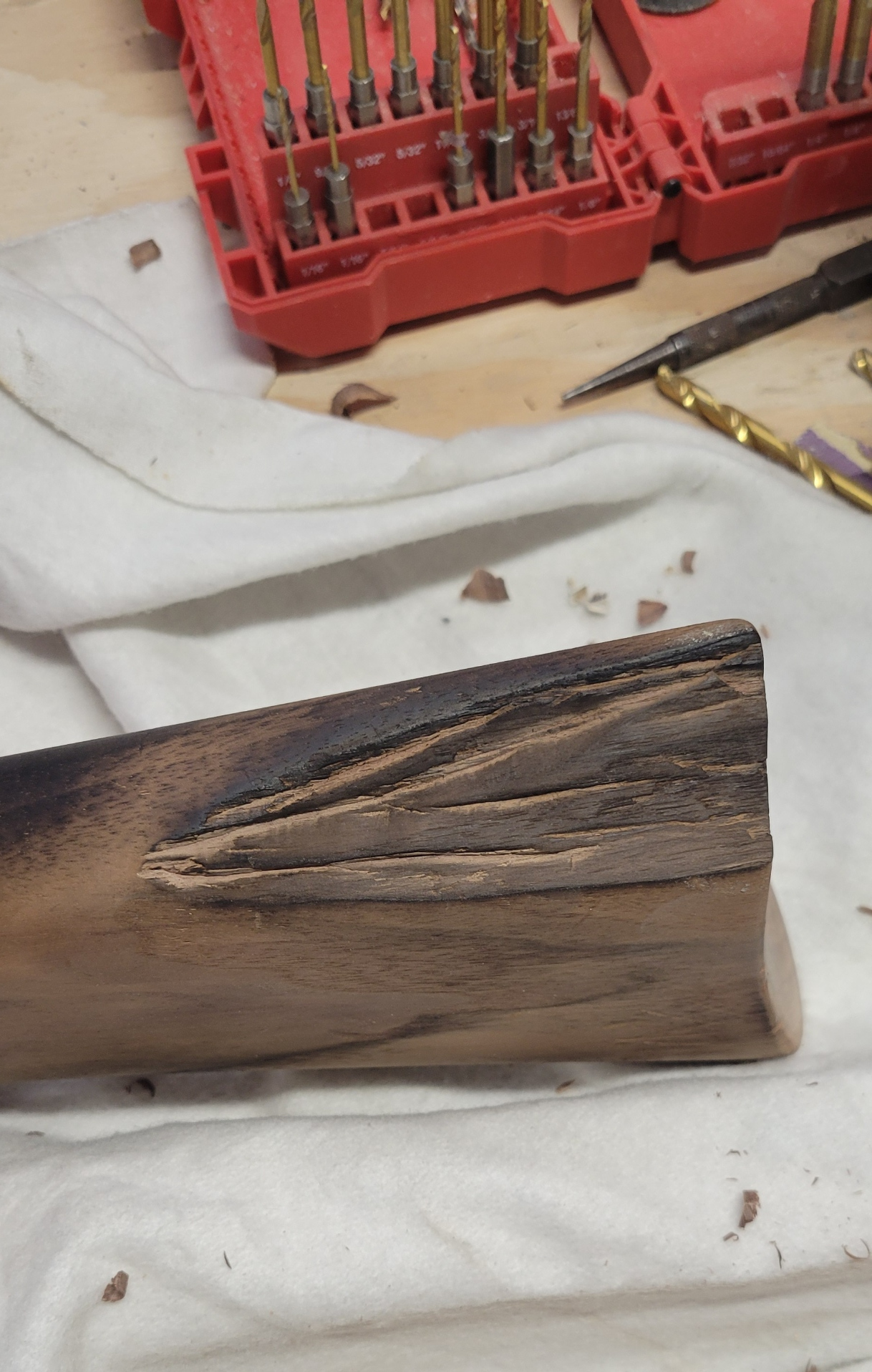 ... and then sanded it all to mesh everything together. 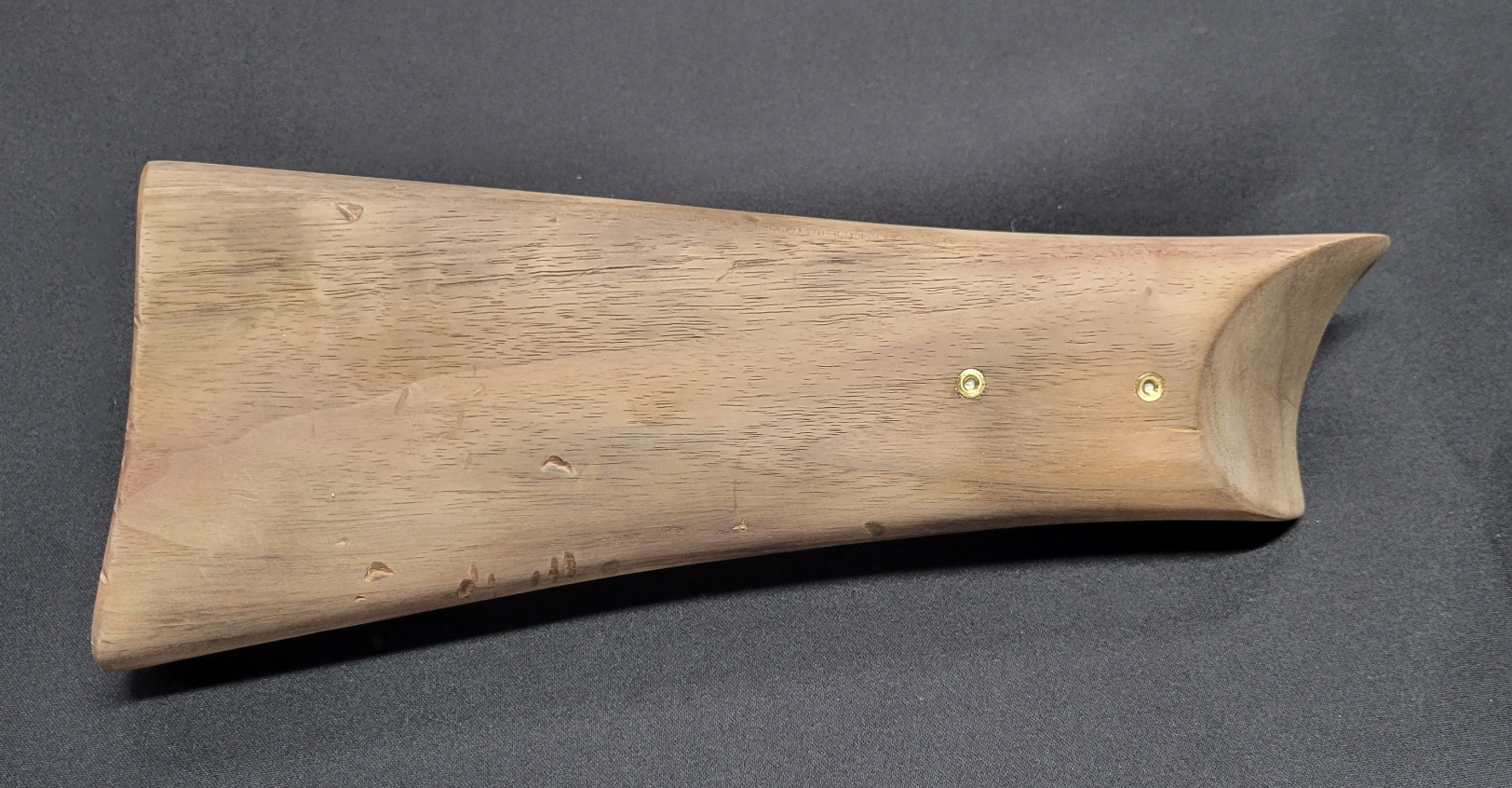 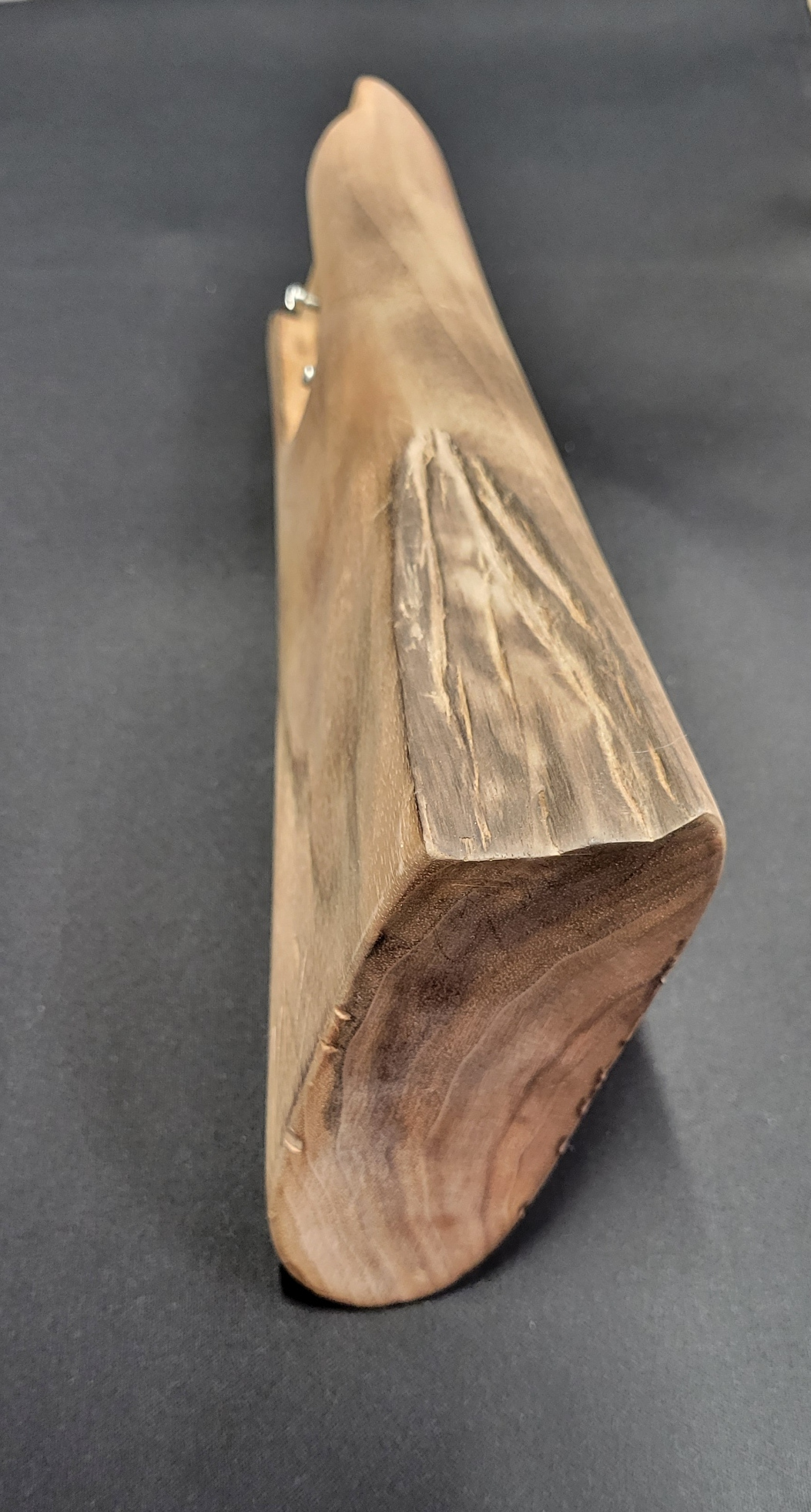 Finally, I sealed everything up with a few coats of Tung Oil. I have used this on stocks in the past w/ decent results - and felt that it would get me close to the color I was aiming for (i.e. that of the Hero stock). 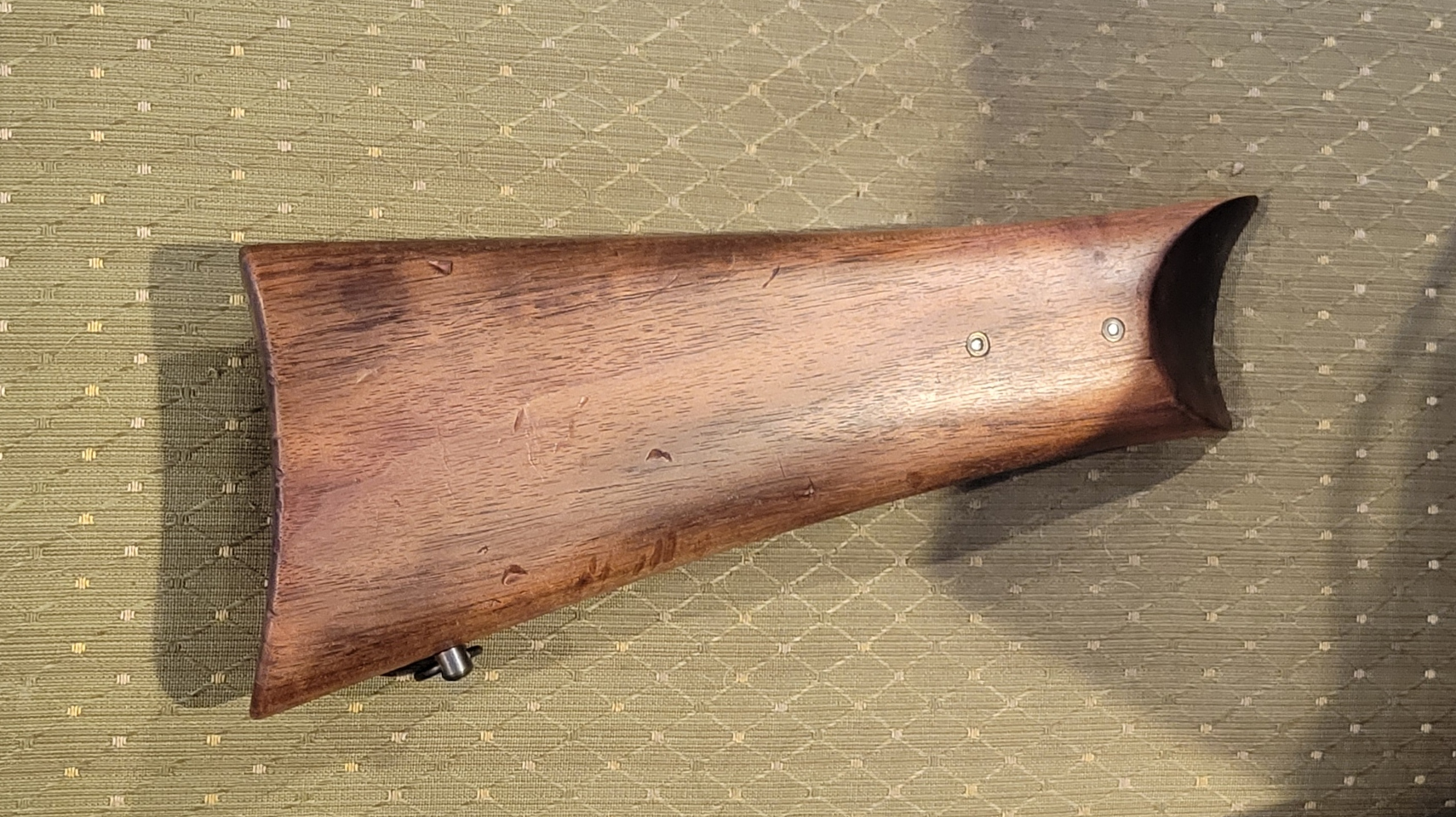 Although I did not get a picture of the other/damaged side at this point, it's probably just as well b/c I soon realized that the stock would need to go back under the knife (see below). 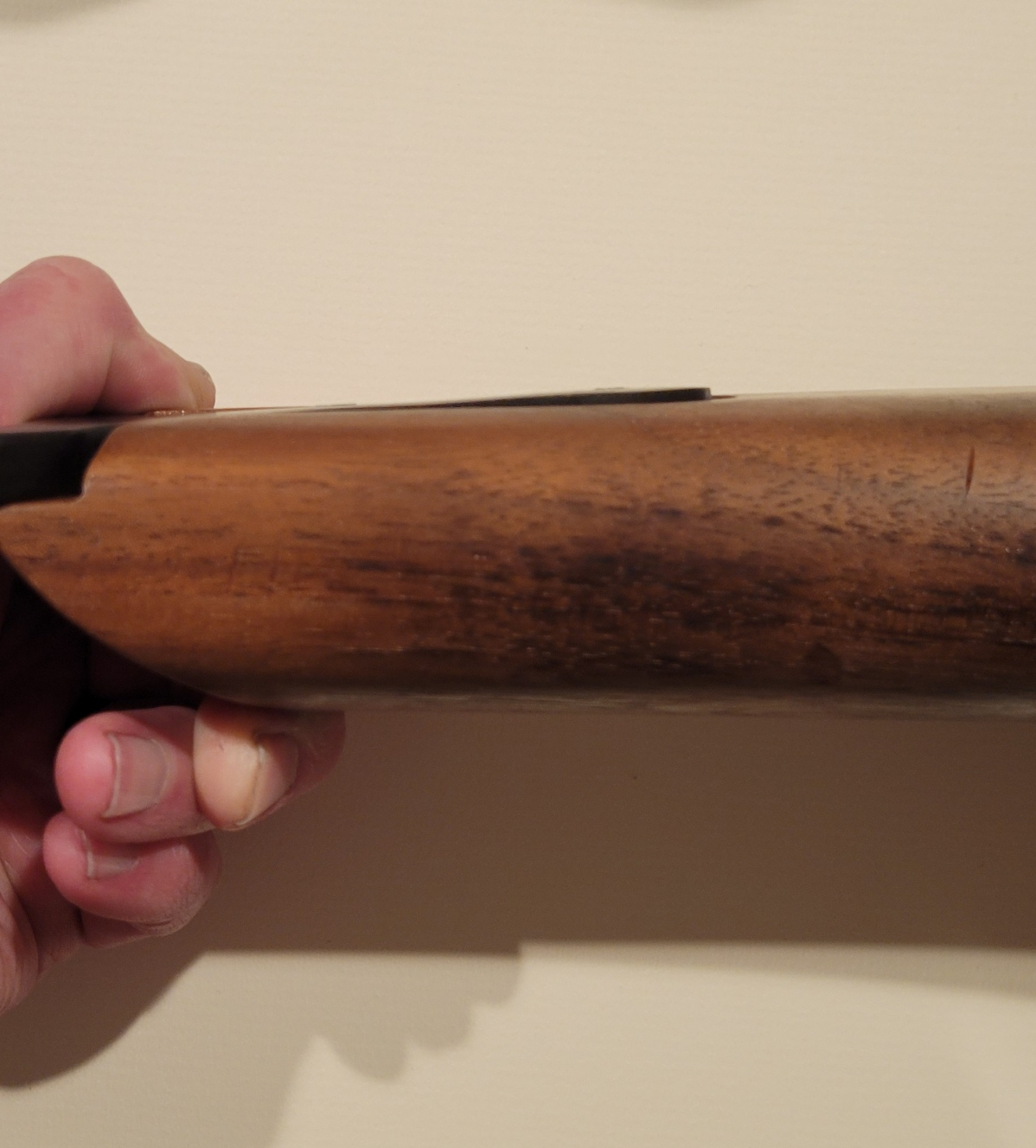 Very nice color on that stock. Well done. This is going to be a legendary build I think!

TDH PREMIUM MEMBER
It was hard making the decision to cut that area out of my stock too but you gotta do what you gotta do.

Fettacini said:
Very nice color on that stock. Well done. This is going to be a legendary build I think!
Click to expand...

Thank you, Fattacini! While I make no claims of being capable of producing something even remotely 'legendary' in-nature, I do very much appreciate the vote of confidence!


BudaFett said:
It was hard making the decision to cut that area out of my stock too but you gotta do what you gotta do.
Click to expand...

Agreed. Although I may not be able to replicate every fine detail of the original prop, my goal is to at least capture the essence of them. To that end, I've included some pictures below of the stock's current state. Although I'd originally added the greeblies to the side at the time of this post, I since decided that it was too shiny so I removed them and dulled the finish a bit w/ some 0000 steel wool. 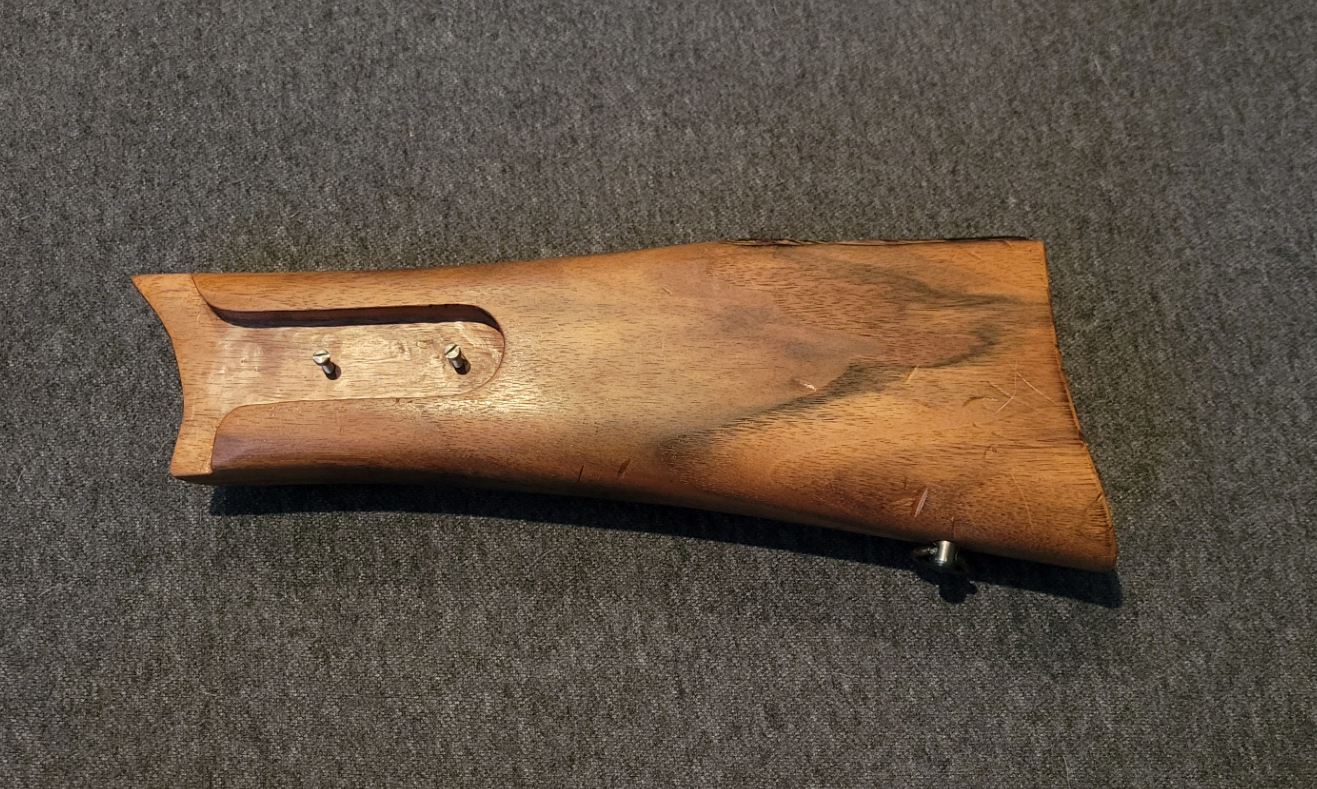 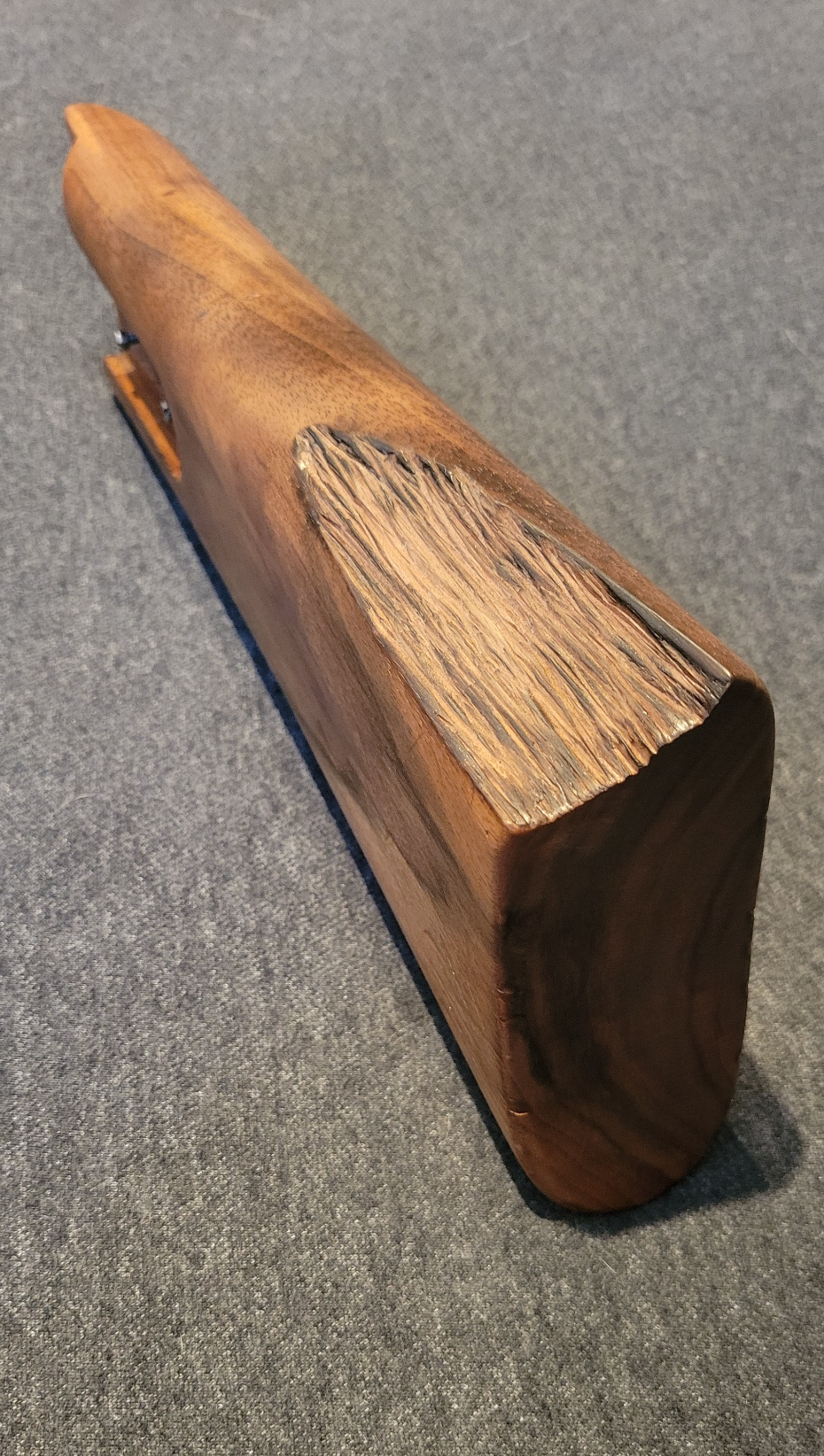 You may notice that I made some changes to the missing chunk area. After looking at my initial attempt for a while, I decided that it just didn't look very natural so I came up with an idea: cut out a *very crude* miniature version of the stock (intentionally aligning the wood grain such that it would split along a similar plane to the original missing chunk) and then whack the corner with a hammer! The result then became my inspiration. 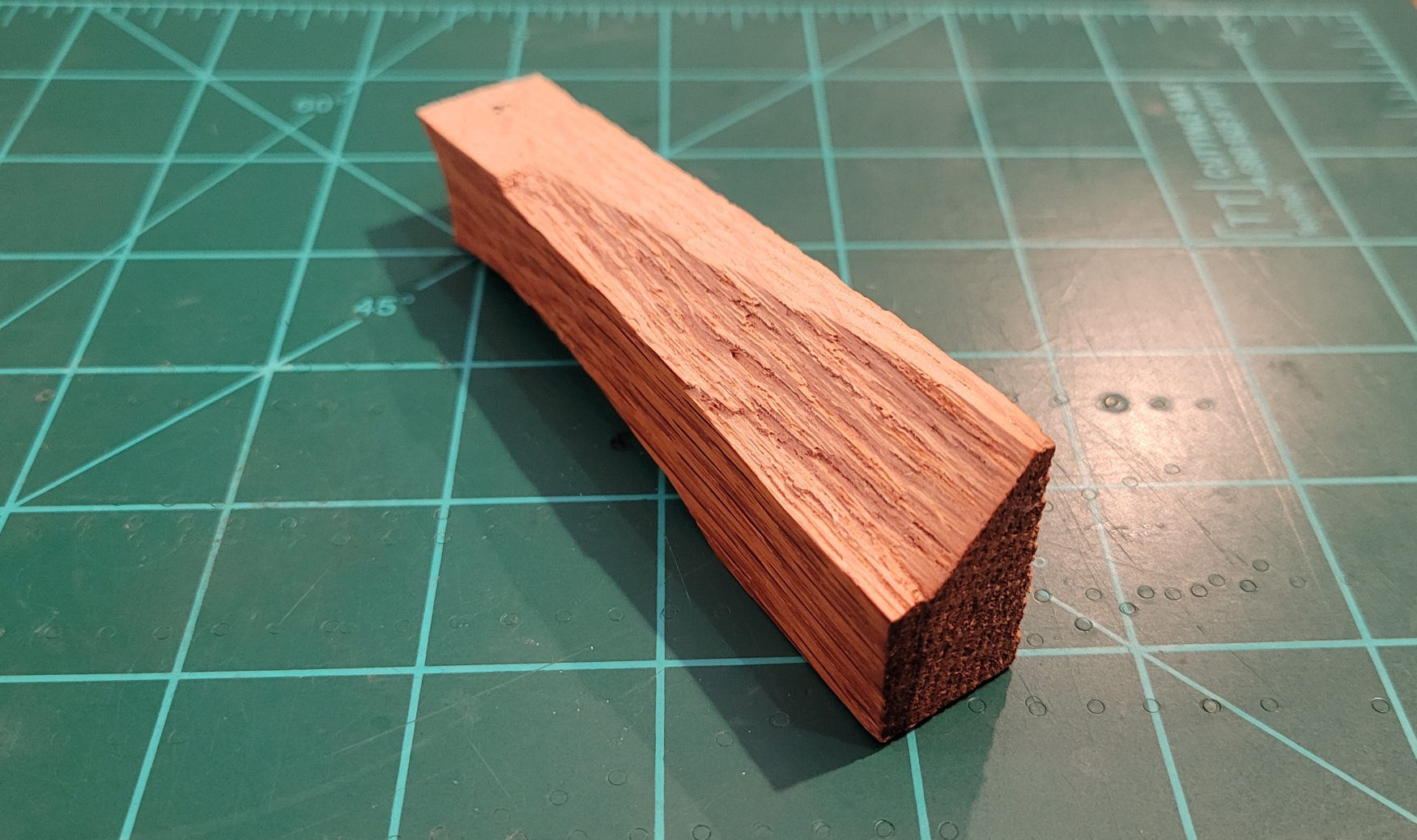 Also, on a totally random side note: while I have thus far tried my best to keep little white dog hairs out of my pictures, I've decided that it would be a lot easier to just introduce, to you, my sidekick "Briggs" - and hope that we can all just agree that "shed happens" and overlook them going forward. 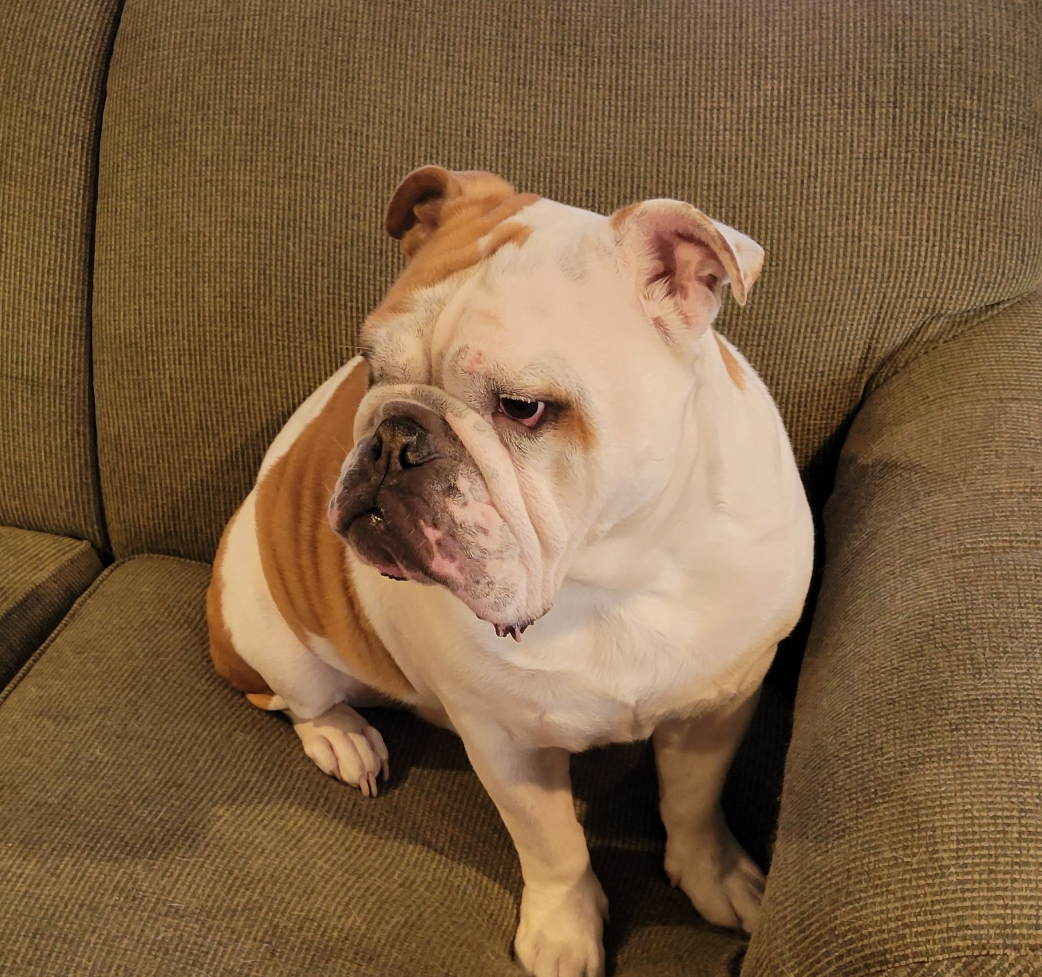 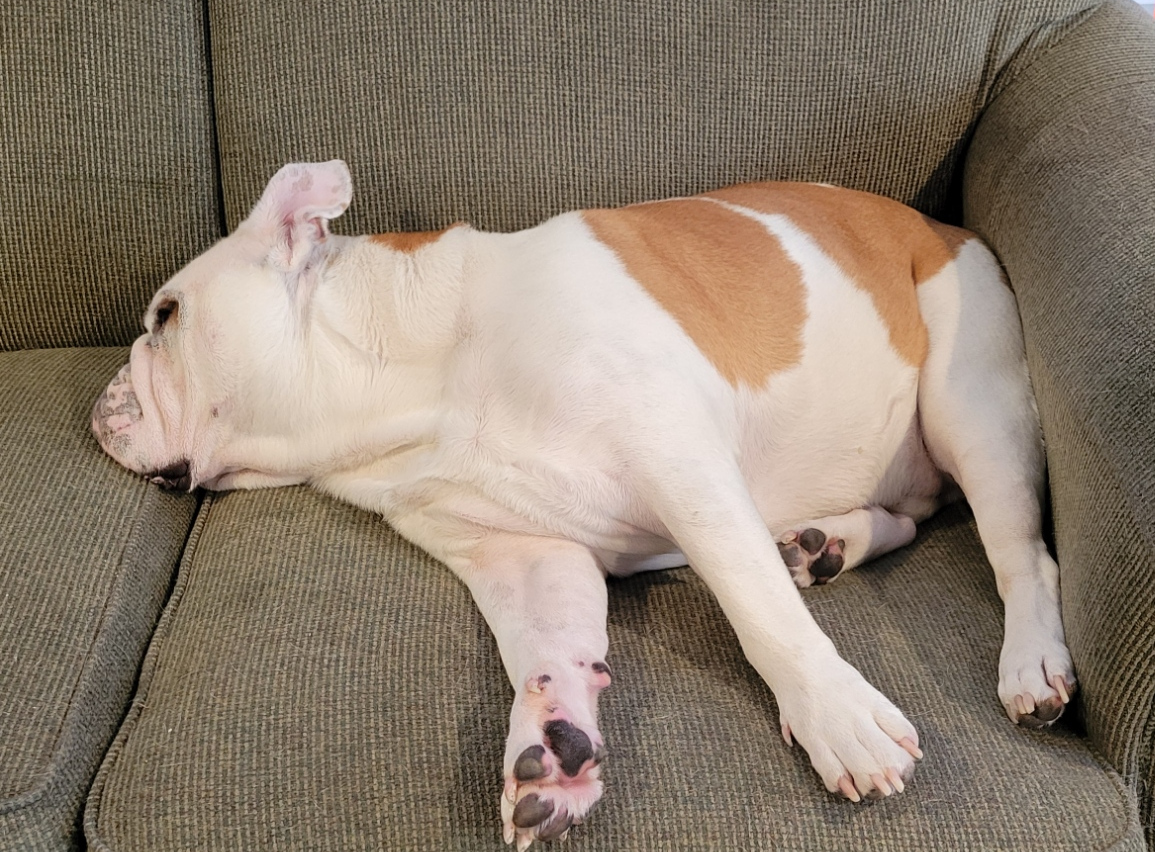 TDH PREMIUM MEMBER
At this point, I believe I have everything ready to start the actual assembly. Here's a summary of how I got here:

These little buggers have been causing me the greatest amount of headache but I believe I'm finally to a point of satisfaction w/ them (or perhaps I'm just surrendering; I don't know). 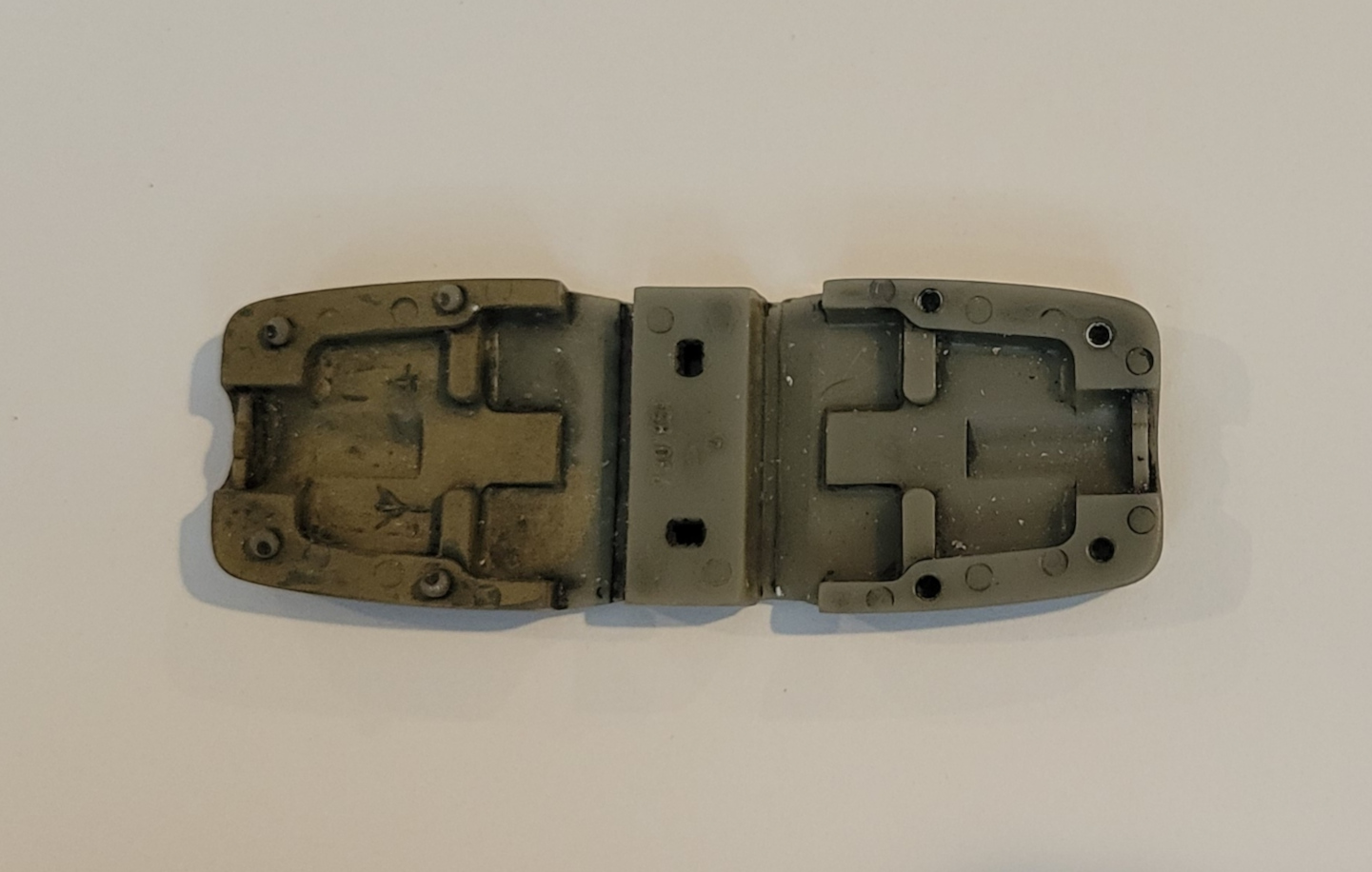 Although there were resin versions included w/ the kit (as pictured above), I really wanted to more naturally replicate the on-screen look (black paint peeling/flaking off of a plastic white body - without having to worry about sanding through a layer of white paint). As a result, I turned to my 3D printer for assistance. While looking for Unimax greeblie replacements (more on that below) I lucked upon RafalFett's astounding resource of 3D printable goodies and remembered seeing files he'd created for the LMK AM plugs too. I then quickly located/extracted those files and began printing.

RafalFett: In case you see this, there's no way I'd have started any/all of this without first seeing/admiring your tenacious work on all things Boba-related (especially the helmet; I hope to have that build documented next). You, sir, are truly an inspiration for me, personally, and a HUGE asset to this community. Thank you, thank you & thank you for all you've done & do.

Once printed, I went to work on painting them up - but no matter what I did I just couldn't get past the feeling that something didn't look just right. It wasn't until I had them lying on a table beside of my resin versions that I realized some differences between the two. 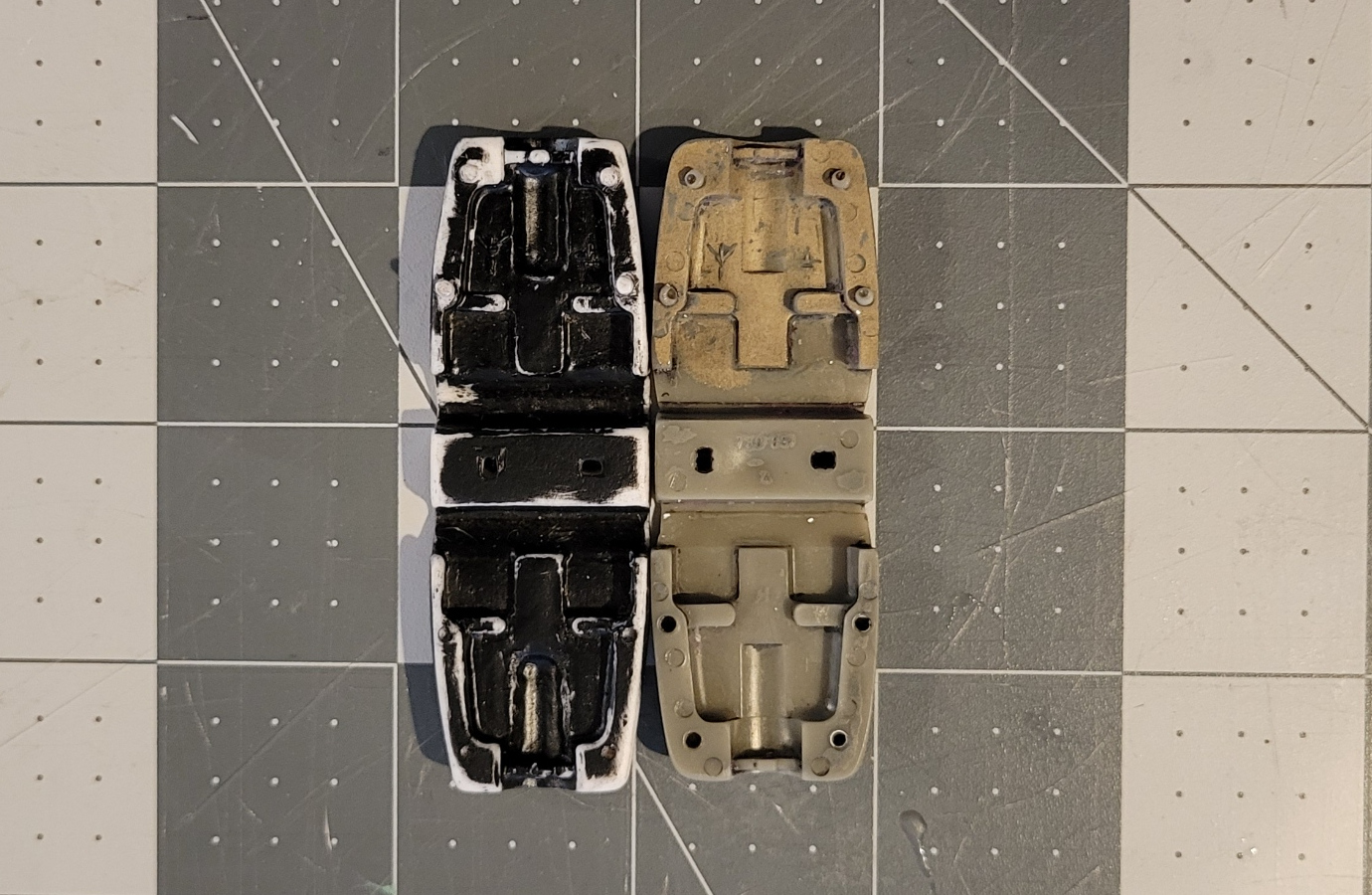 In short, my printed versions of the RF files were both thinner & longer than my resin ones and this was most noticeable (to me at least) w/ the protrusions circled below. 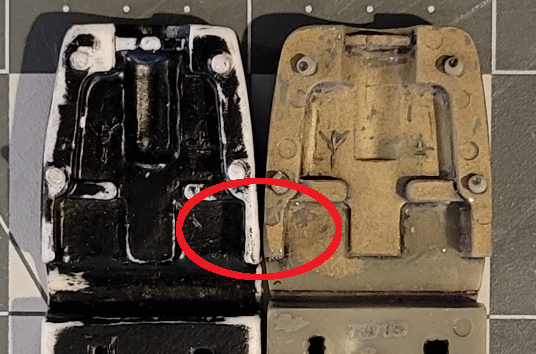 As a result, I decided to reinvent my own wheel. 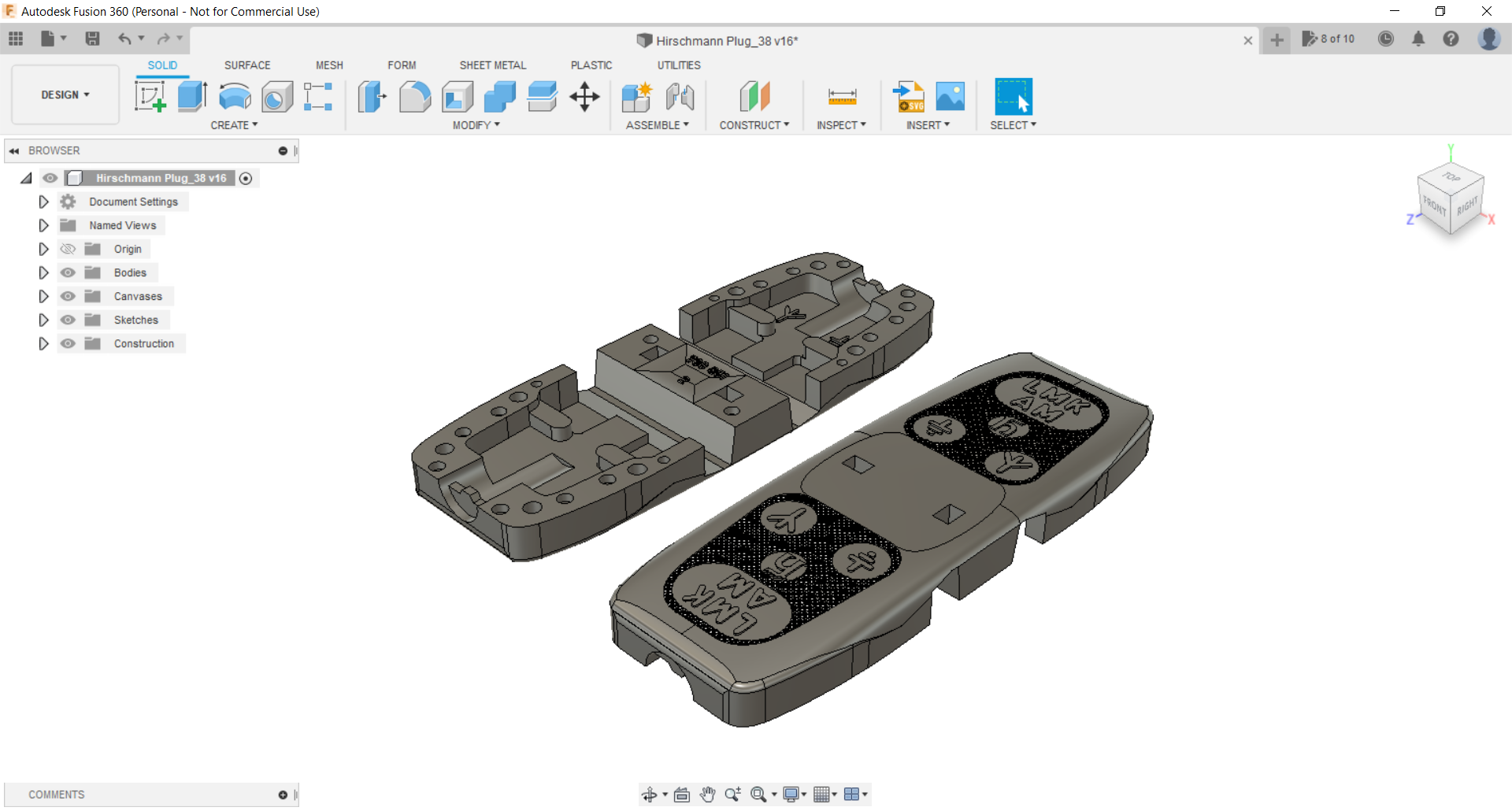 Since I do not own a resin printer (yet), I chose to actually print each plug in white ABS plastic - sliced into four separate pieces. Once printed, I acetone-welded them together, cleaned them up and got to work painting/distressing. Although I may end up re-doing these all in the future (if I ever get my hands on a set of actual LMK AM plugs or something), I am considering the versions below as complete. 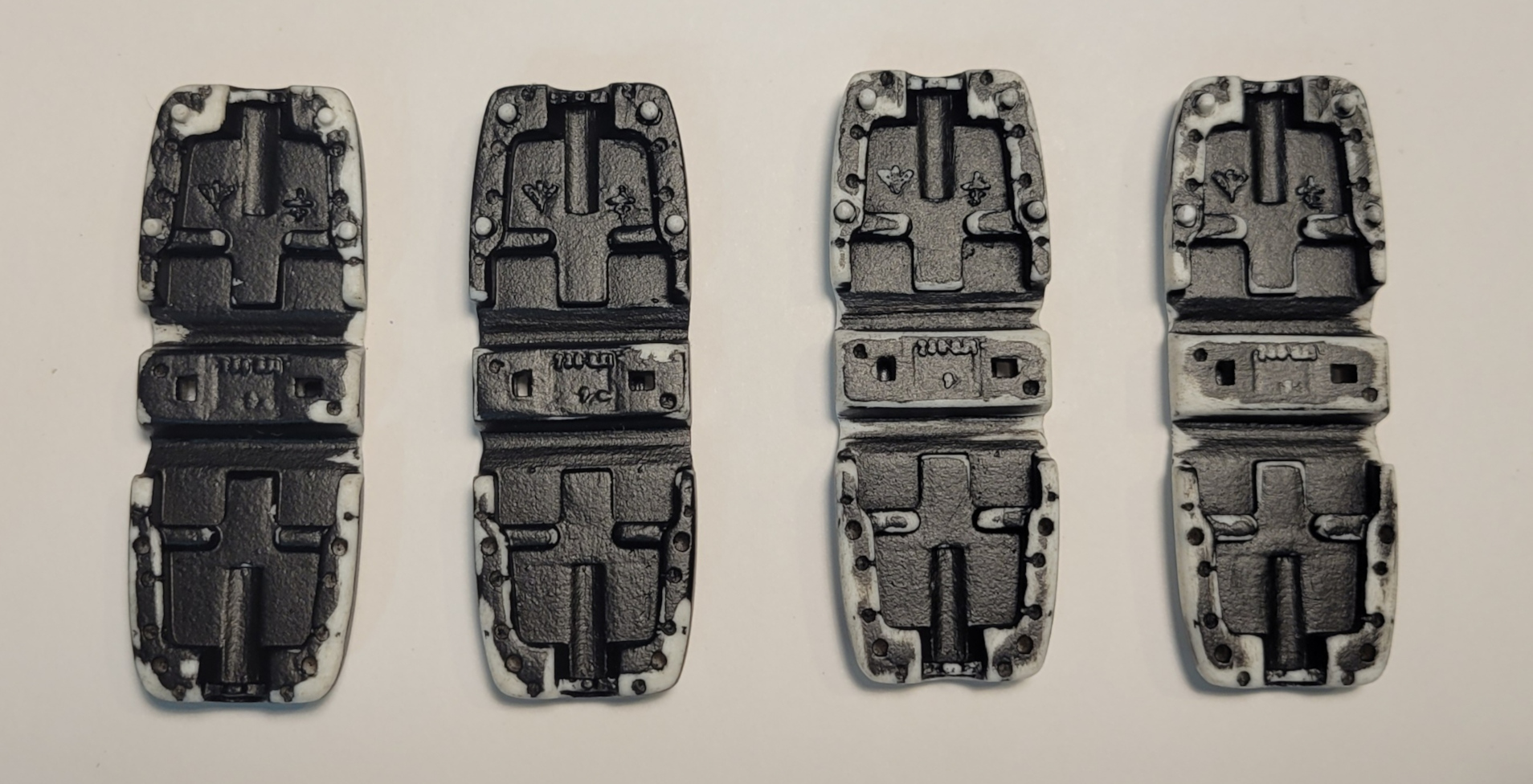 As alluded to above, I also decided to replace the resin versions of the Unimax switch housings (Center stock greeblies) w/ 3D printed versions (Thanks again RafalFett!). As you can see below, the 3D printed versions (left) were absolutely leaps and bounds above the resin ones (right) which were included w/ the kit. Note: I followed a similar process on these as I did on the LMK AM plugs above - where these were printed in red ABS and welded together during post-processing. 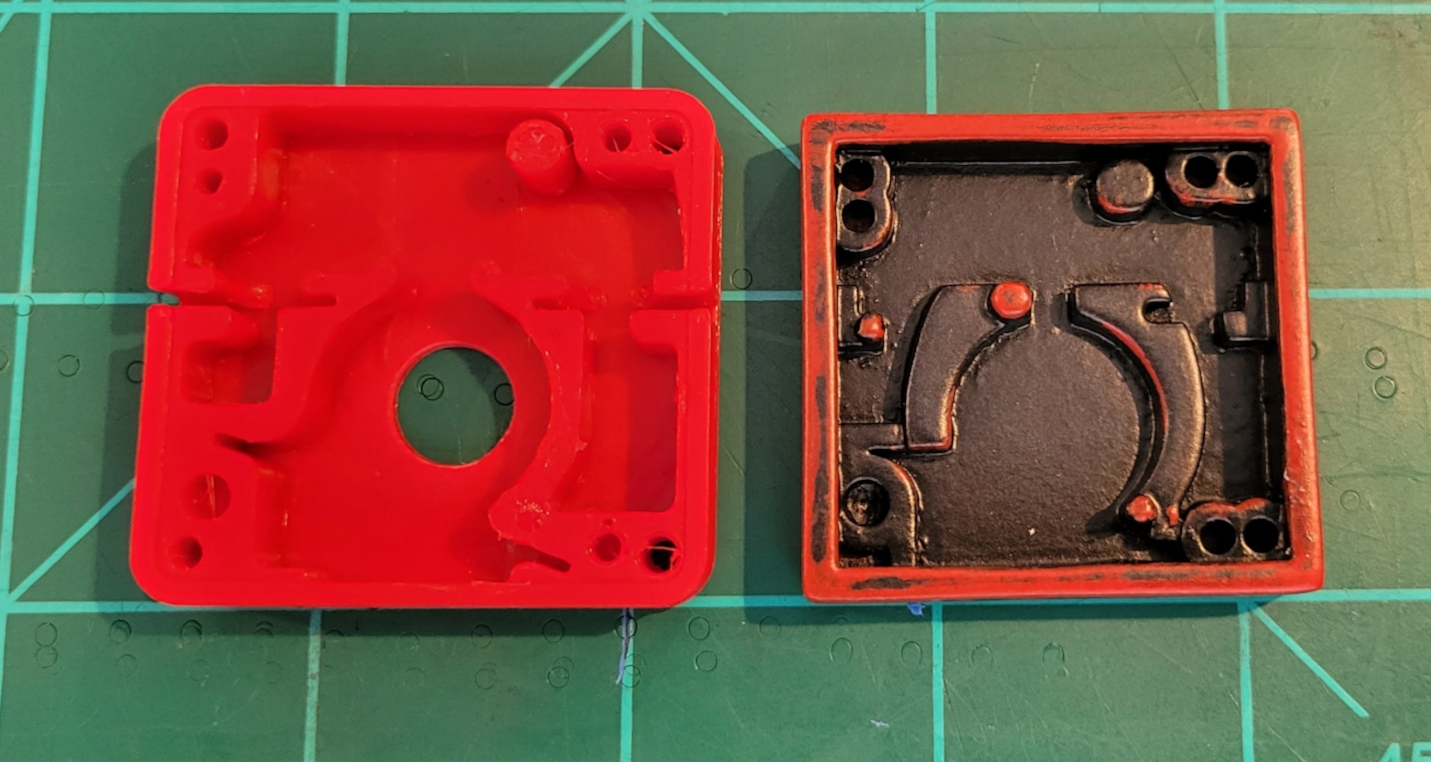 Next on the chopping block was the Molex connectors; the resin versions originally included w/ the kit had the back portions completely filled in.

Since these plugs would've been very difficult to replicate via FDM 3D printing, I chose to take a different route. After locating these plugs from Mouser, I ordered about a dozen of them, drilled the necessary two middle holes & dyed them black using Rit DyeMore in Graphite. 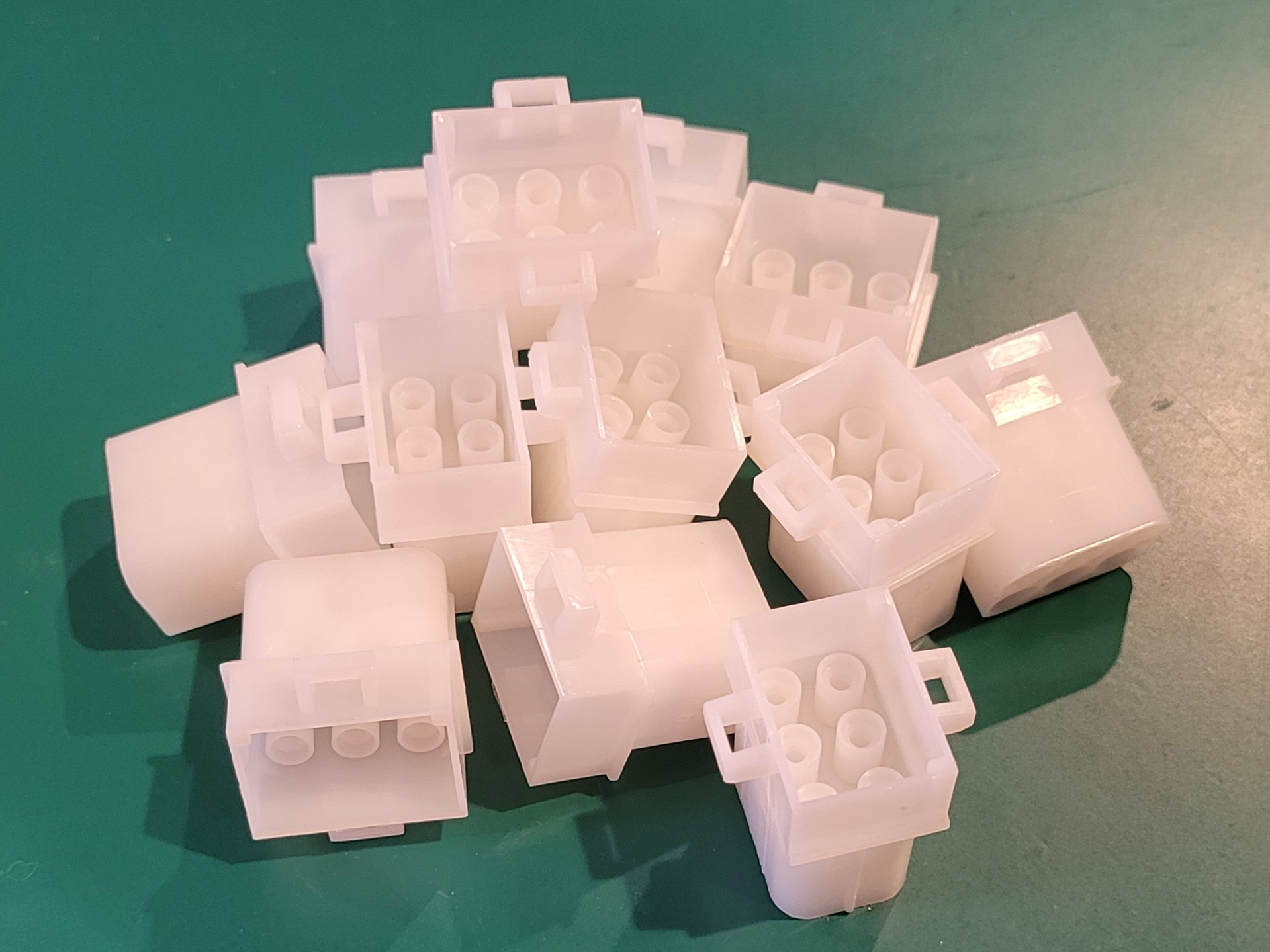 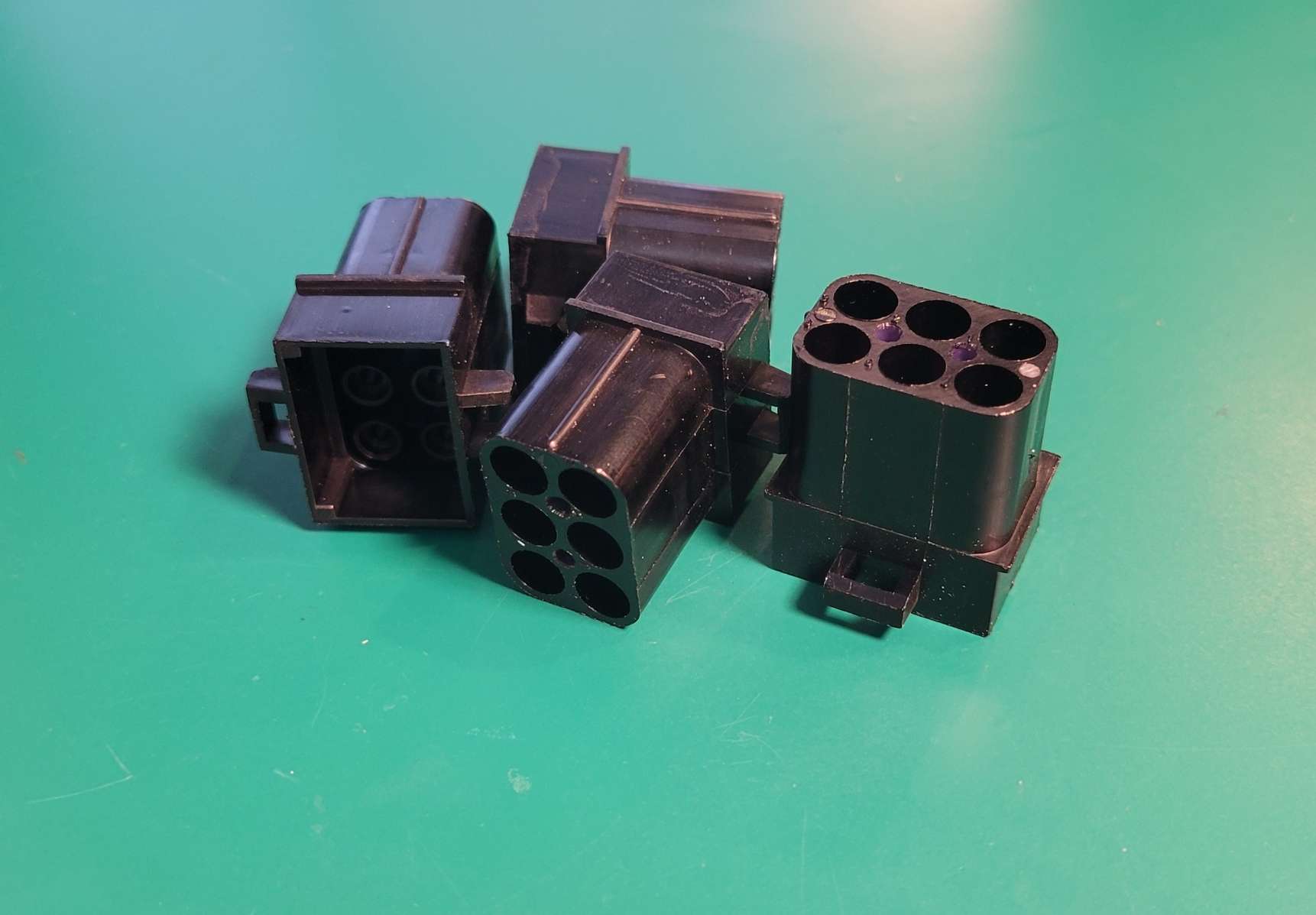 PSA: If intending to follow the Rit DyeMore directions (as I did), be sure to appropriately adjust the amount of dish detergent if working in smaller batches than that which is outlined in the directions (as I did not). I was about 2 seconds away from the bubbly black froth spilling out over the rim of the pot - and presumably dying every tile surface along its path.

Although I did not replace the scope clamps, I did replace the cast bolts with real ones. Here's the rear clamp for reference. I fashioned the bolt from one I had on hand in an effort to mimic the original - and then blued it for a more appropriate look. Note that I cut it off to proper length after the picture was taken. 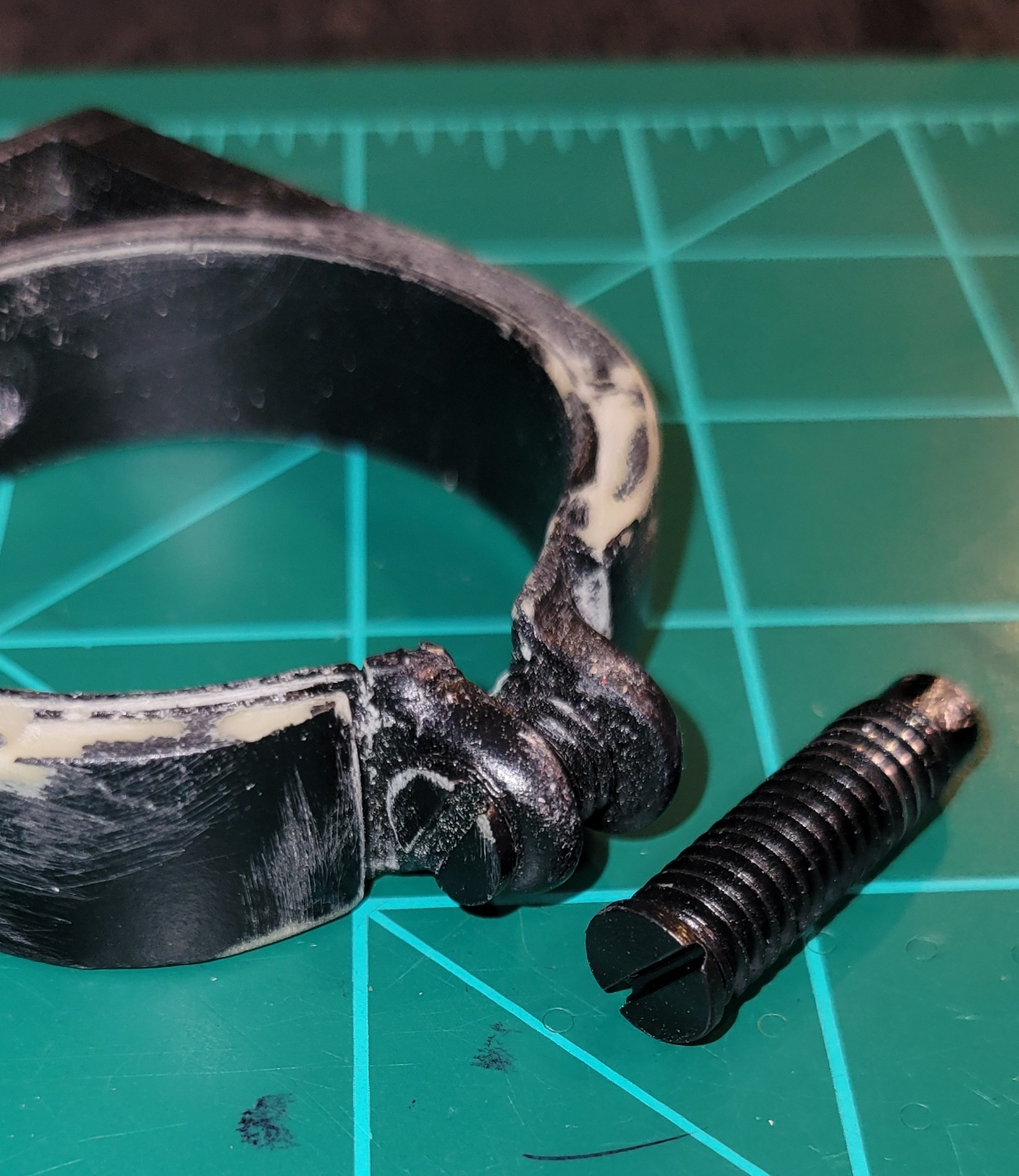 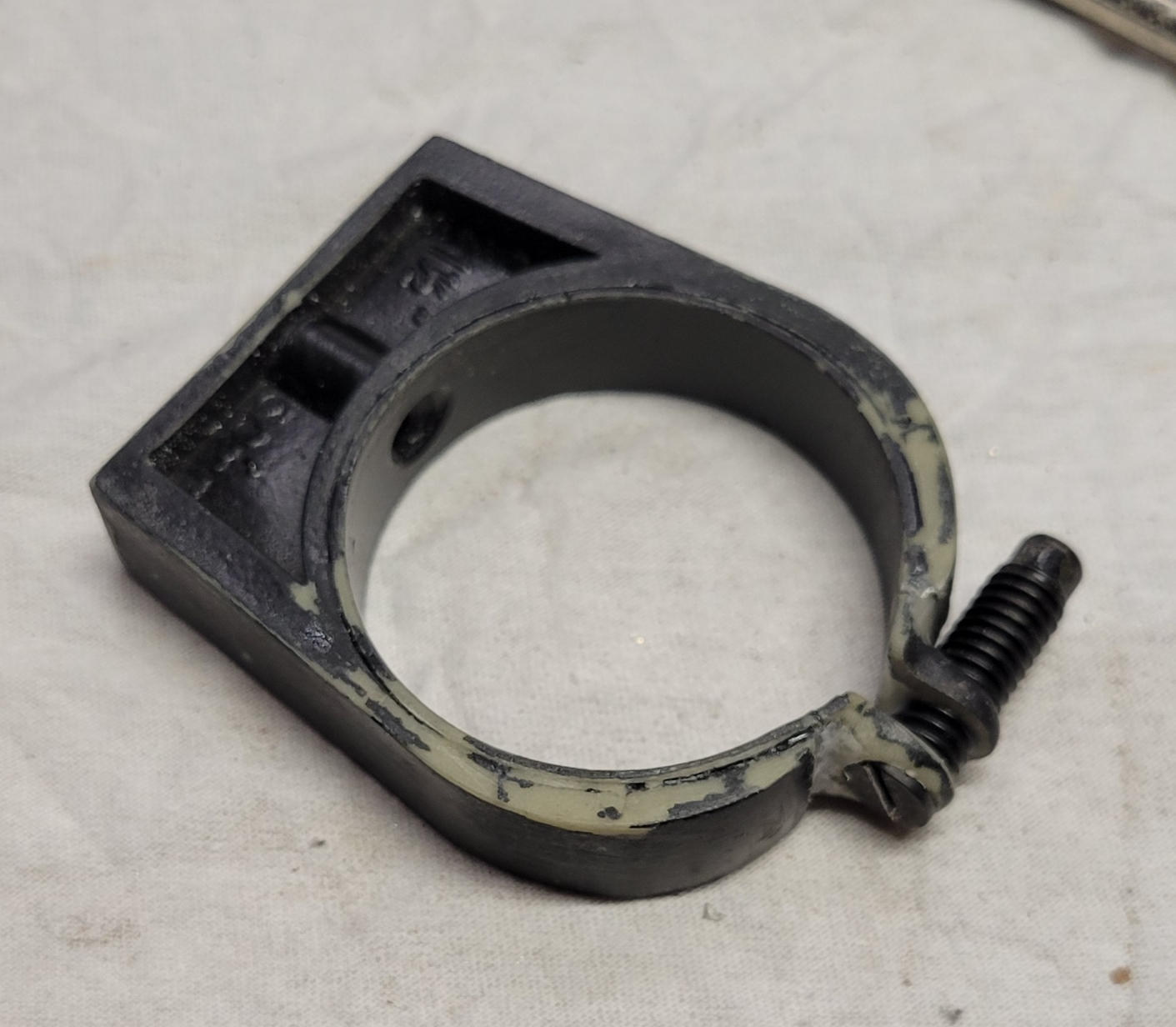 Then last, but not least, are the mystery discs. After seeing so much discussion on them, I decided to take a stab at it myself. After a bit of imprecise alignment in Fusion 360, I began seeing ridges and such take shape so then relied upon some creative guesswork to mock up and print my own interpretive version. An unfinished version is pictured below. 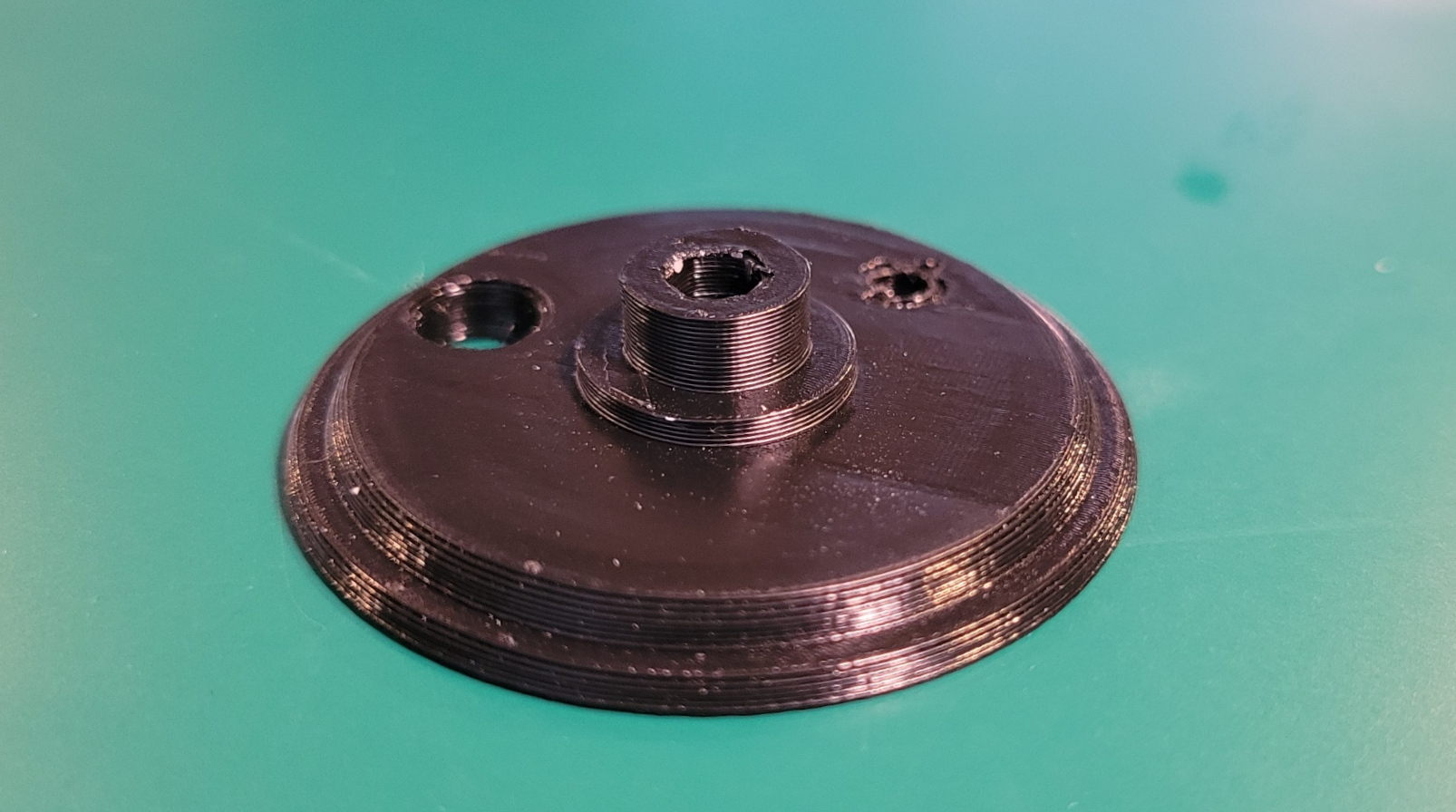 Disclaimer: I make absolutely no claims of this being even remotely close to the actual part's design. I'm guessing that I am like many of you who have studied these pictures for a long enough time to have about forty-dozen different profiles emerge. The style I selected is simply the one I had in mind just before beginning the design, and have since had several ideas arise which are very different than those included in this piece.

That about wraps it up for now. I have also painted up my flash and made a leather strap but will just include those in the next post. Hopefully that one will consist of the assembled (perhaps completed?) reveal...
Last edited: Feb 28, 2022

Thanks for the kind works! You did a great job so far with your build!

Great job with the build so far. That mystery piece that you mention above is not part of my kit - looks like the back half portion of a pen where you click it to push the ink cartridge out. I think you mentioned that you bought this second hand, apologize if this fell into the box when I originally put the kit together or the individual you purchased it from inadvertently put I in the box.

RafalFett said:
Thanks for the kind works! You did a great job so far with your build!
Click to expand...

Thank you very much, RafalFett! I'm really hoping that it all comes together nicely!


davethebookie said:
Great job with the build so far. That mystery piece that you mention above is not part of my kit - looks like the back half portion of a pen where you click it to push the ink cartridge out. I think you mentioned that you bought this second hand, apologize if this fell into the box when I originally put the kit together or the individual you purchased it from inadvertently put I in the box.

Wow! Thank you, Dave! It's really great to hear from you since I literally couldn't have done any of this without you making these kits available in the first place - and having your approval on the work I've performed thus far is like icing on the cake!

As for the kit itself, you are correct about me acquiring it second hand. I should have mentioned this earlier but I messaged the previous owner at about the same time as my first post and he responded afterwards confirming, "I believe those are 'extras/bonus' parts." I have held onto it since that time but I can definitely see it just being a pen clicker thing now that you mention it.

This is the Way.

...and in an attempt to remain relevant to the site, I've included a couple of sweatshirt blankets I "Fett-icized" within the past week or so as his backdrop.