TDH PREMIUM MEMBER
Curious to how that bottom vent is installed? Did it have screws that you had to fit in order to have it installed?

BudaFett said:
Curious to how that bottom vent is installed? Did it have screws that you had to fit in order to have it installed?
Click to expand...

I believe he had to epoxy some machine screws to the inside of the vent, if I’m not mistaken.

TDH PREMIUM MEMBER
BudaFett ,
ShortFuse is correct. I know I post a TON of pictures, so it may have been missed.....but here they are again. 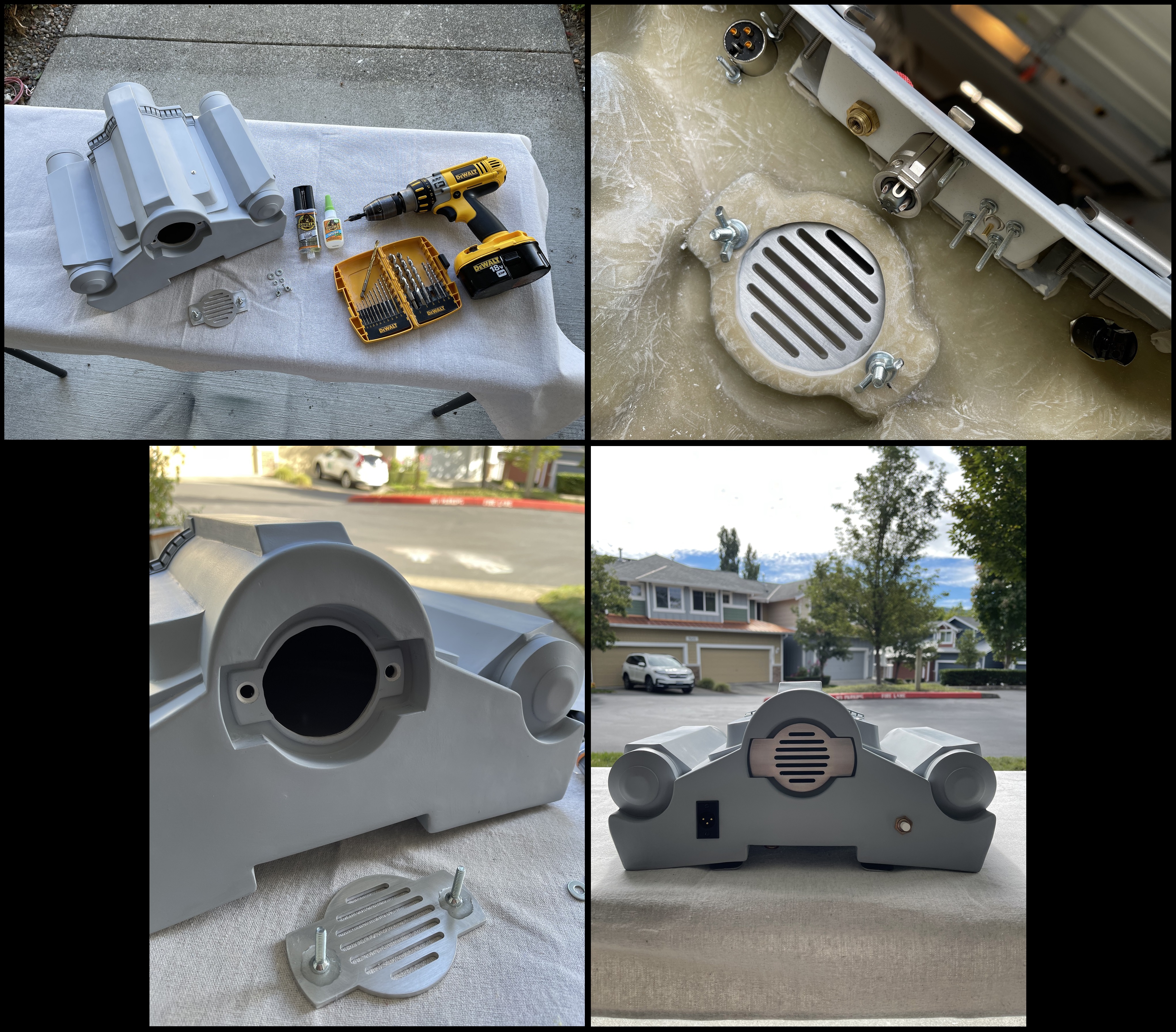 For my full time job as a Sales Engineer I had my hands pretty full in September, so I didn't have too much time to spend on my Boba Maker Jetpack. Also it was the end of Q3 too - end of quarters are also a super busy time for us! And here we are in October and I have not done anything to my Jetpack since the last post.....

I had an issue that needed to be dealt with before I proceeded with painting - and that issue was the Rocket. As you may recall, I sanded off the Boba Maker Jetpack Collar to make way for the MCR Collar I have!

Here's a small recap of that endeavor.... 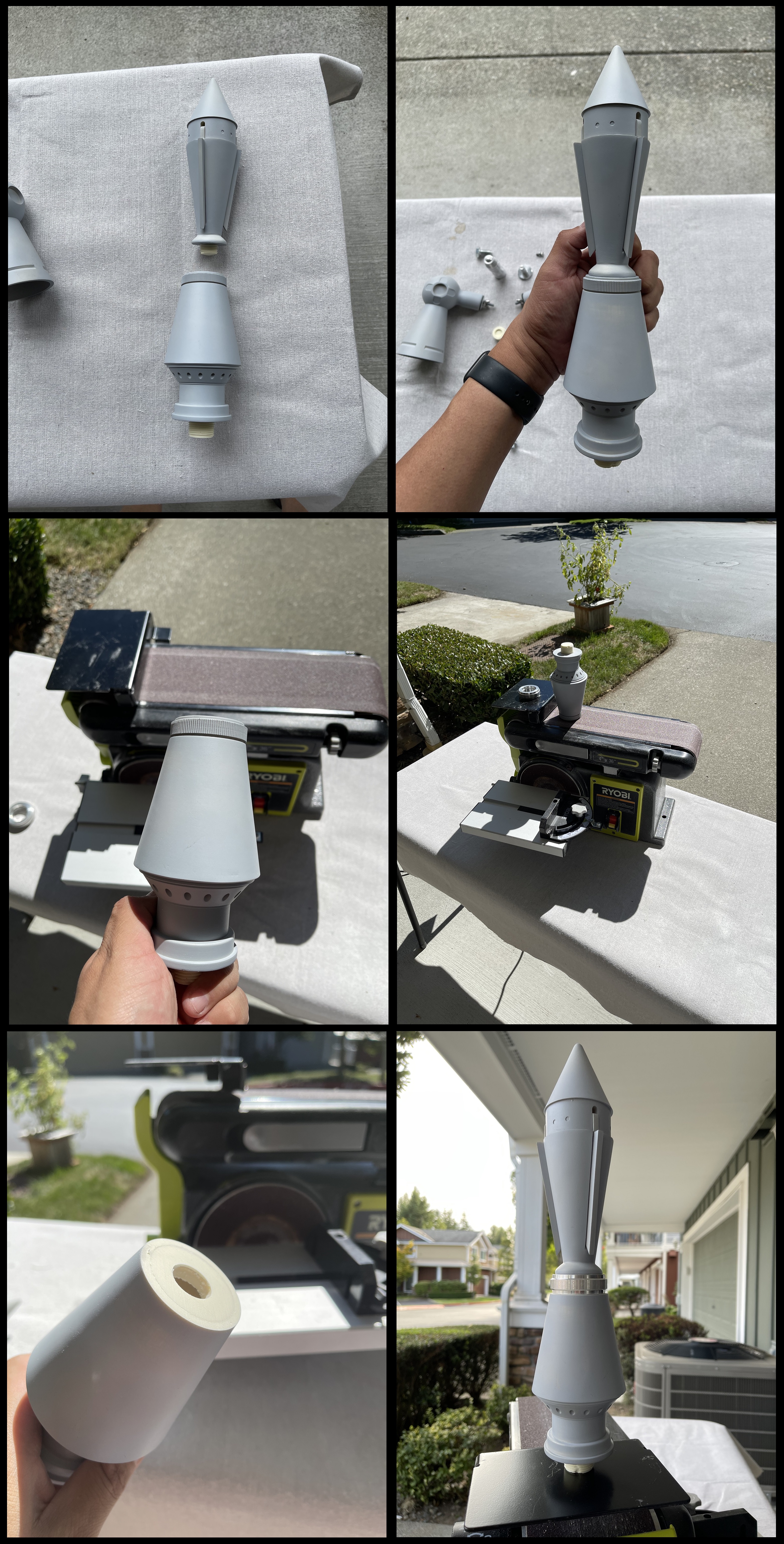 ....the things we do to get Metal parts to fit, huh? (Remember my Boba Maker Gauntlets and MCR Flamethrower Nozzles?)

So, in that picture above (The one in the Lower-Right hand corner), Gravity is the only thing holding that together. Obviously, I needed something more permanent. And therein lies the issue. How to get them all to fit together and hold snugly? I thought on this pretty heavily and landed on a solution that I thought would work well! tennantlim has this exact setup (Boba Maker JP and the MCR Metal Rocket Collar) and in his thread (Tennantlim's Thread) he posts that he used JB Weld to hold them all together. I will also use JB Weld, but only a half-measure. My idea will improve upon this design and hold it so that the only real way it comes off is by a great deal of sheer force. Last thing I want, is for the rocket to get caught on something and snap off! Which would be not only embarrassing, but also heart breaking at the same time. Here's the idea.....

Embed and use a toggle bolt! 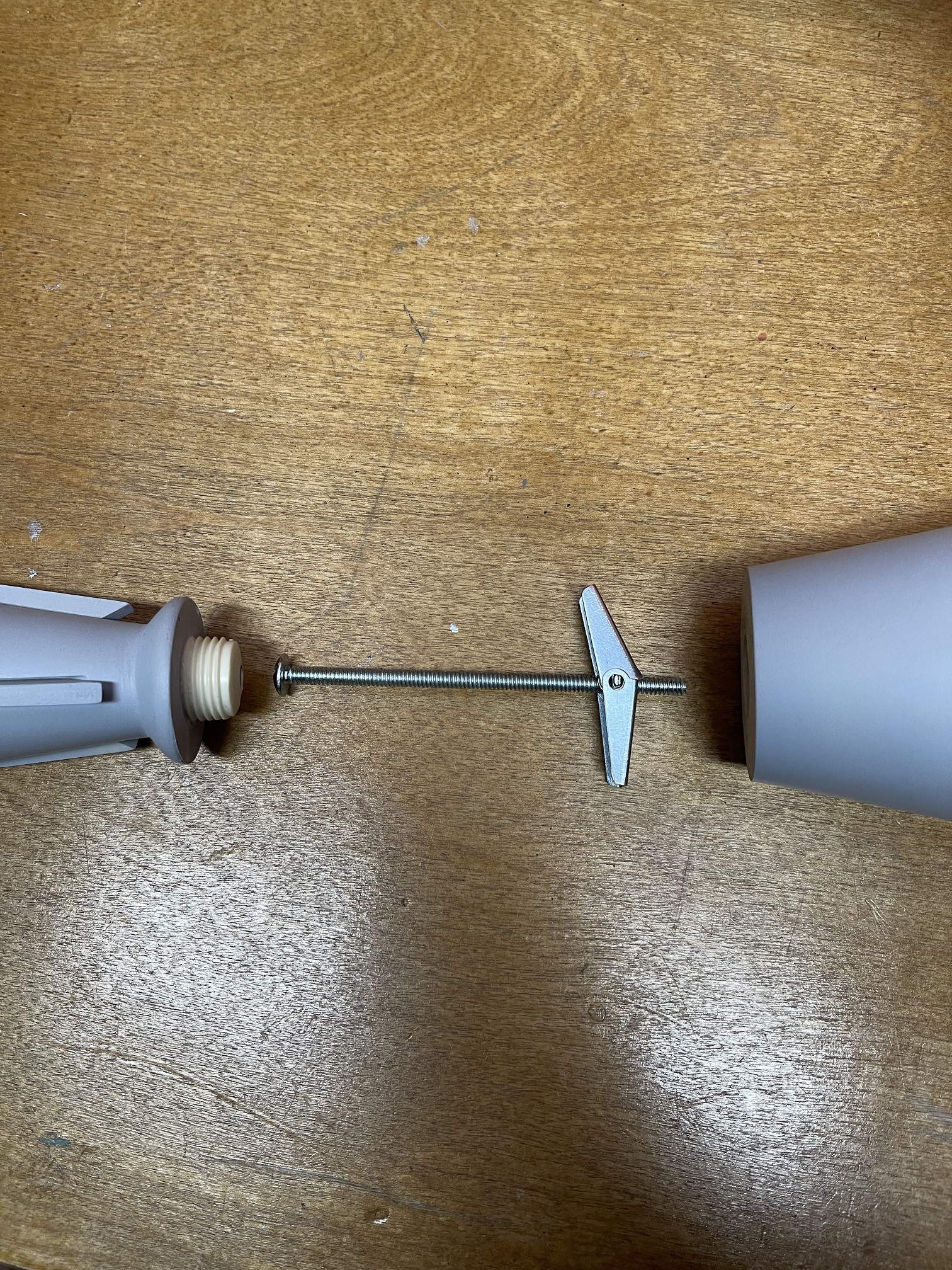 One of the caveats is, is that the Toggle Bolt must have a pan head on it - which emulates a small washer. Here is what I did!

1) First thing I did, was file down my Dremel cutting wheel by continuously cutting off the ends of a spare Steel Bolt I had - the idea of this was to be slightly bigger than the pan head of the Toggle Bolt. 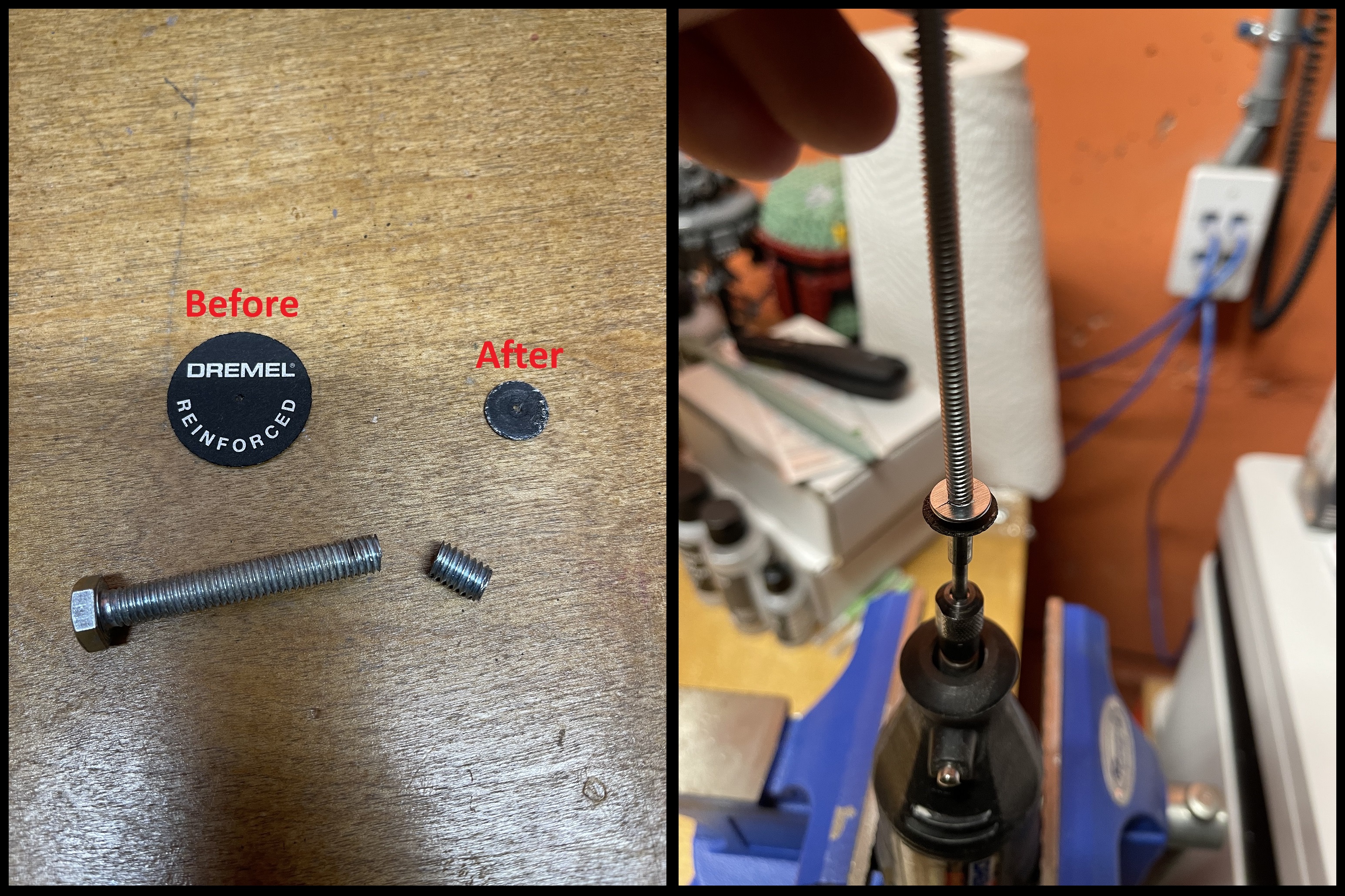 2) Using the Dremel Cutting Wheel to also lop off either end of the Toggle bolt wings... 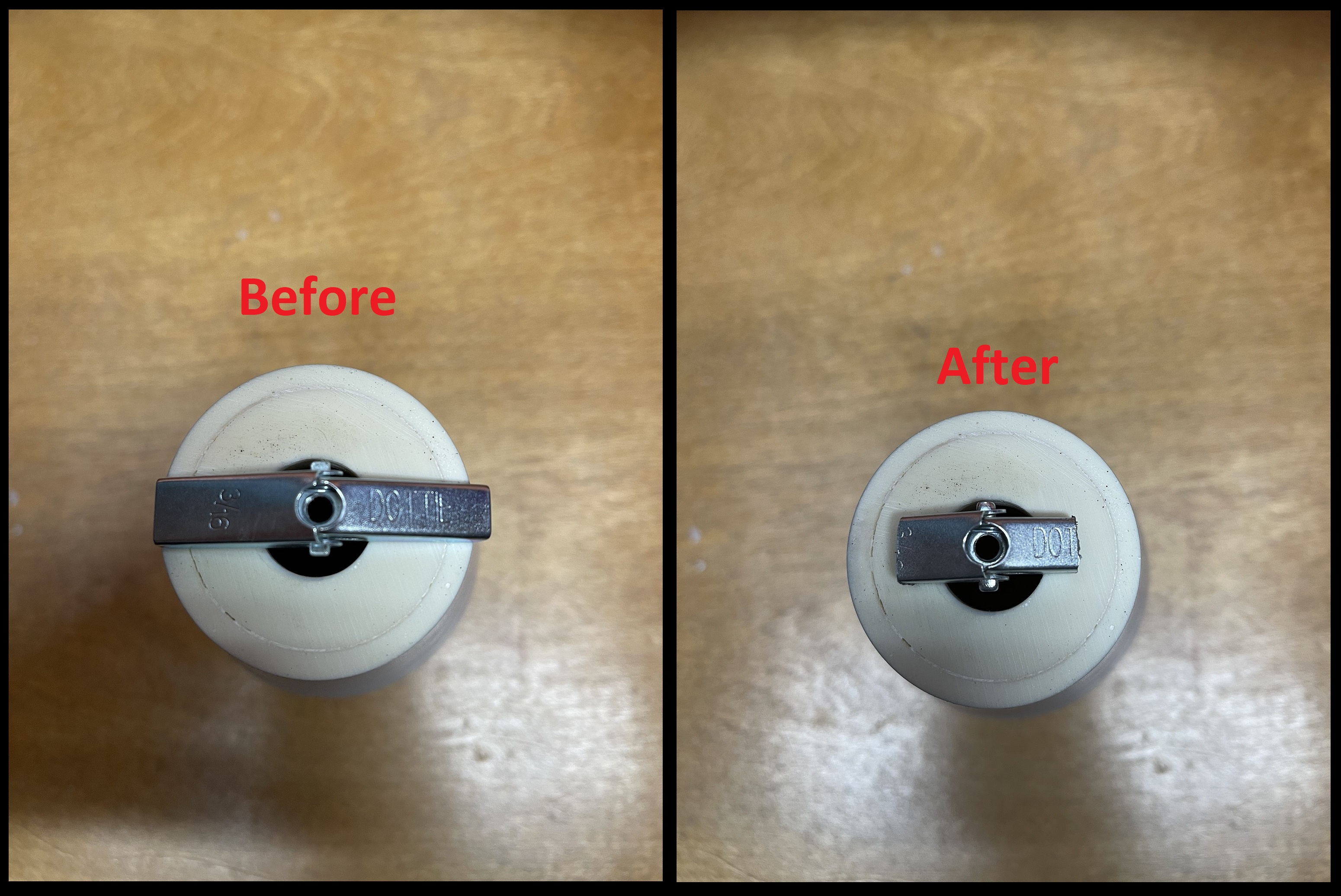 3) Next thing was to notch out the space on the rocket - easy enough to do with my Dremel and drill bit that also acted as a cutting bit. 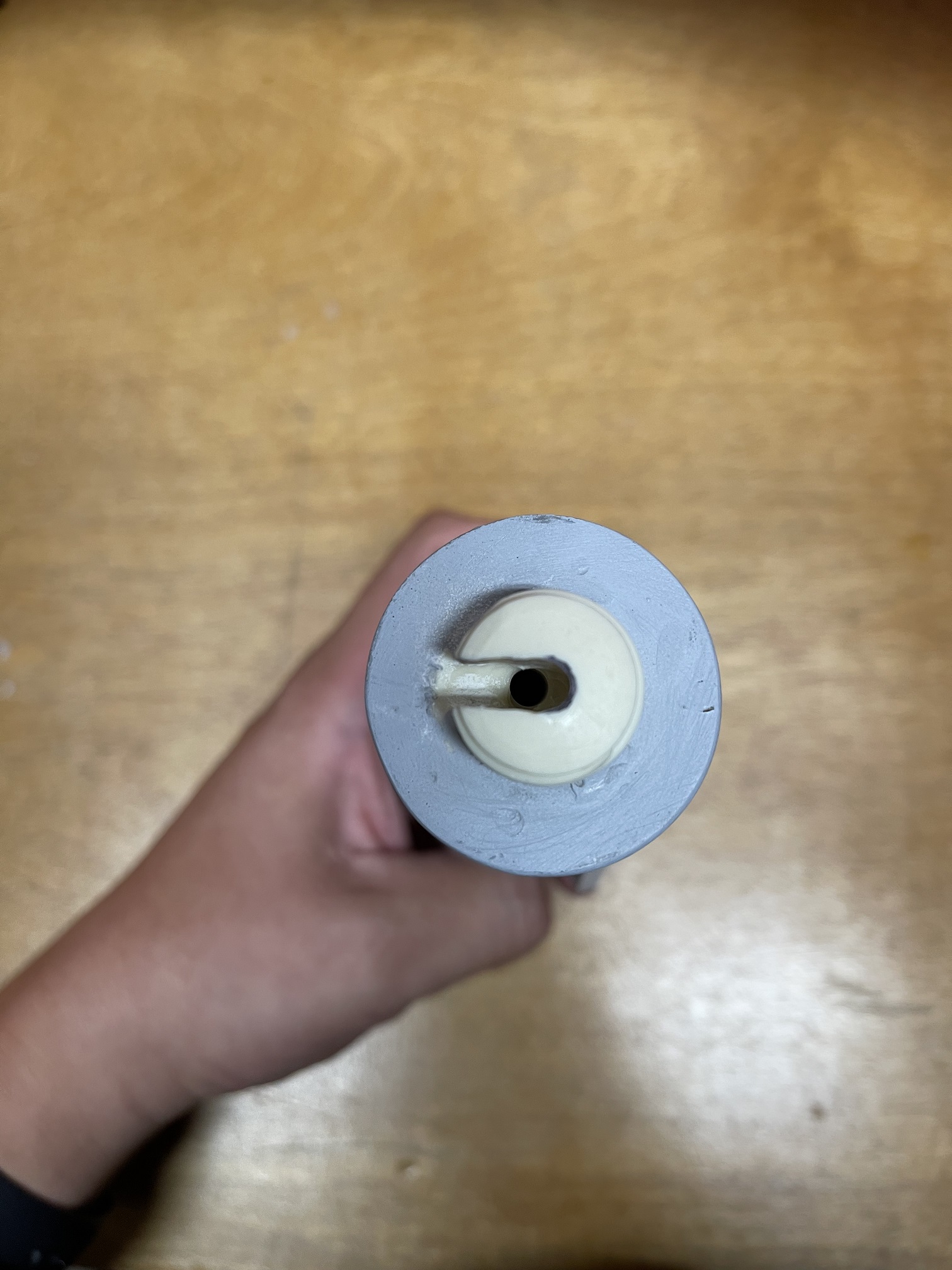 4) Then using the "Small Cutting Wheel" on my Dremel, begin to cut out the space where I'll slide in the Toggle Bolt. 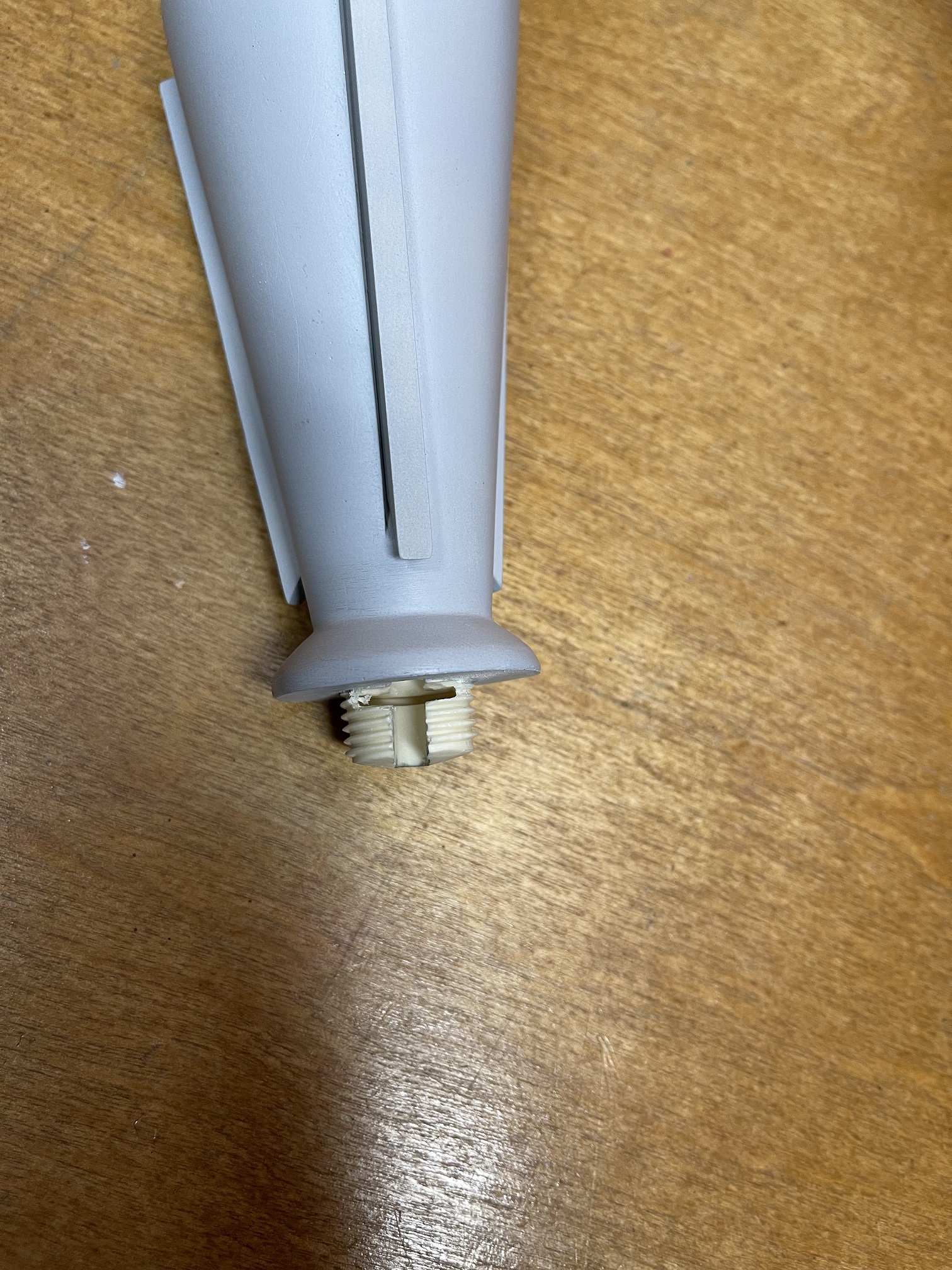 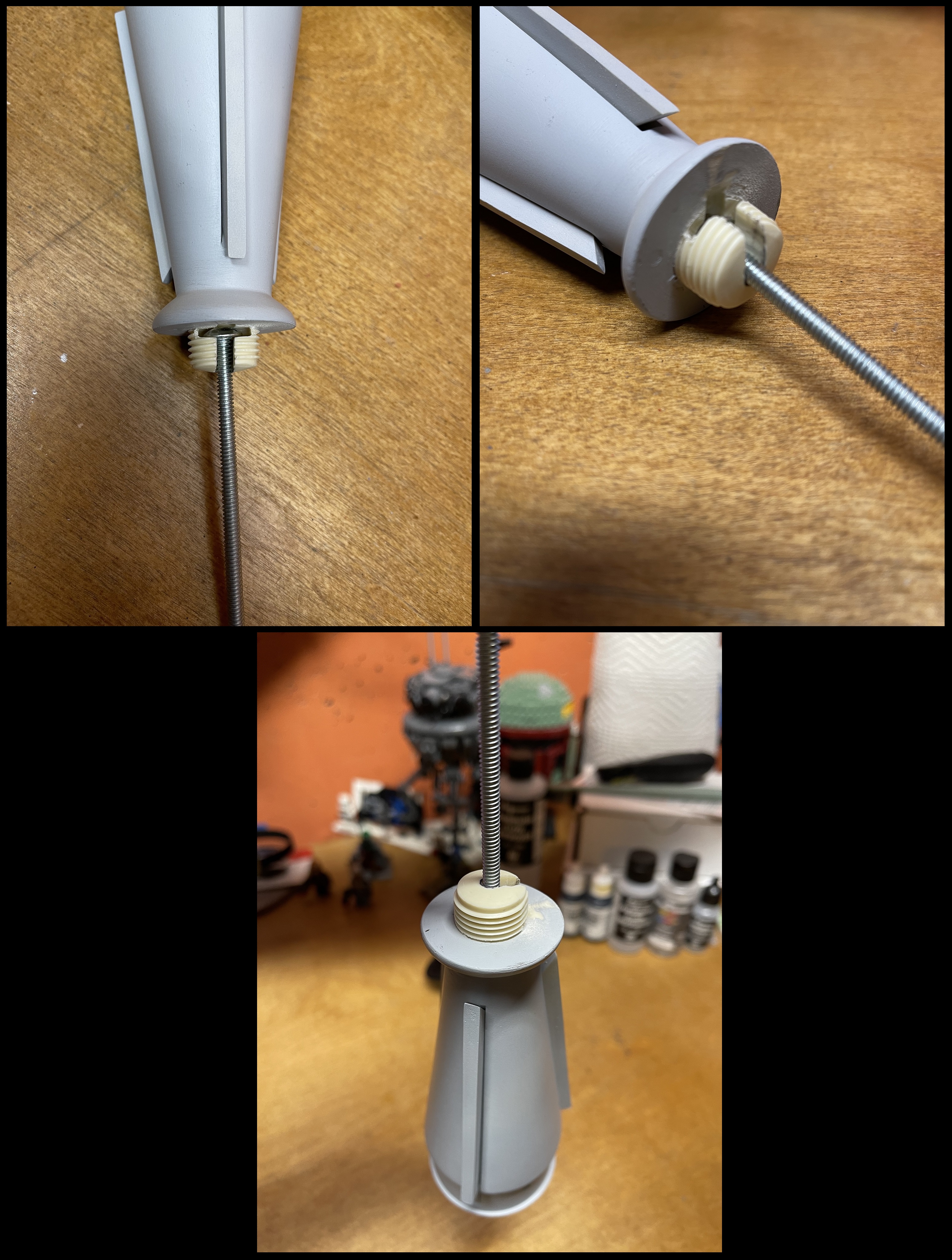 6) And now to test fit it together. My intention (Which hasn't been done, yet) is to epoxy the bolt to the top rocket and then like tennantlim - use JB Weld on the MCR Collar on either end to attach both rocket pieces. But here it is assembled (With no Epoxy or JB Weld)
....As you can see I can hold it horizontally and it holds with no issue. 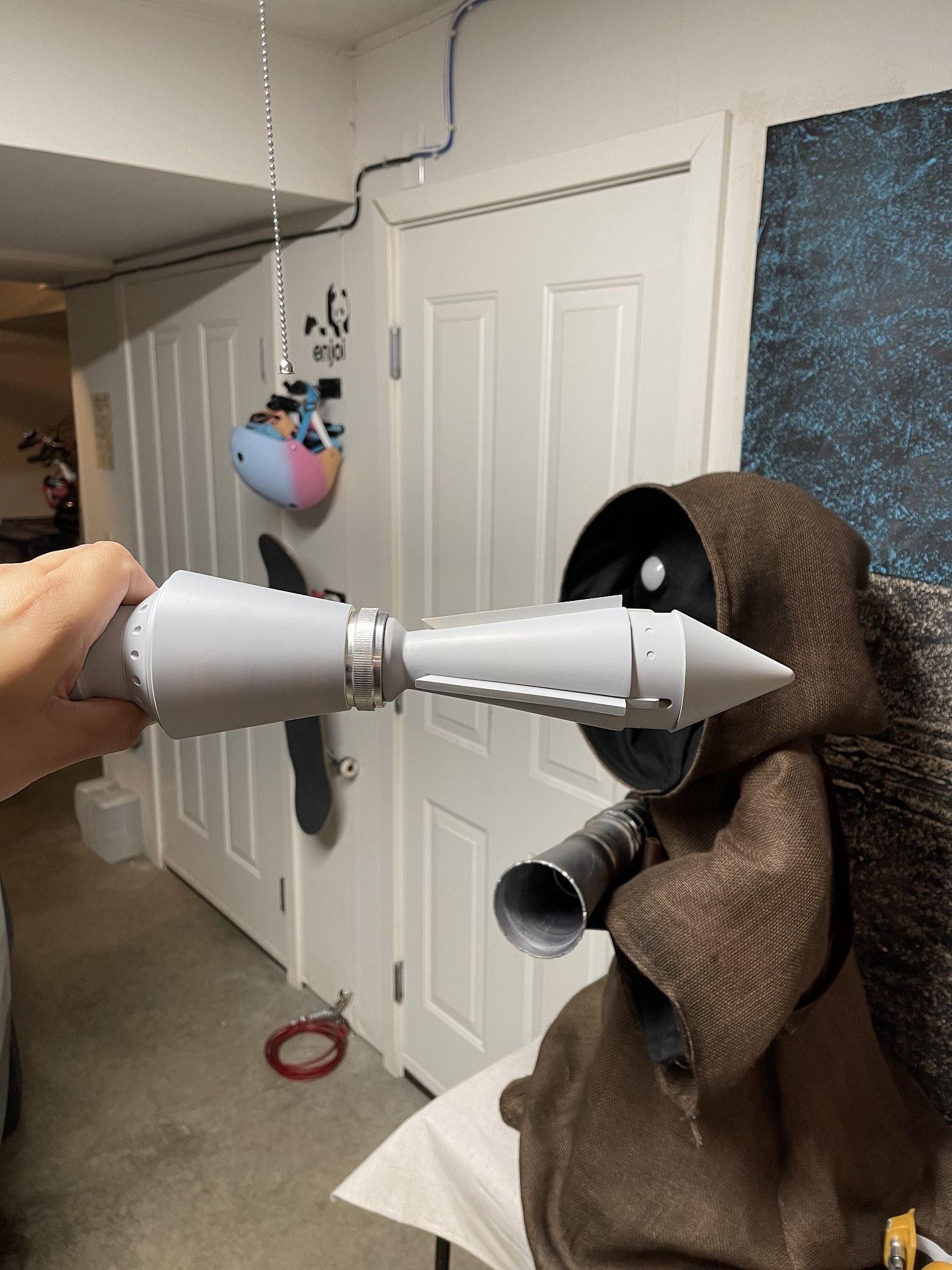 And then here it is on my Jetpack... 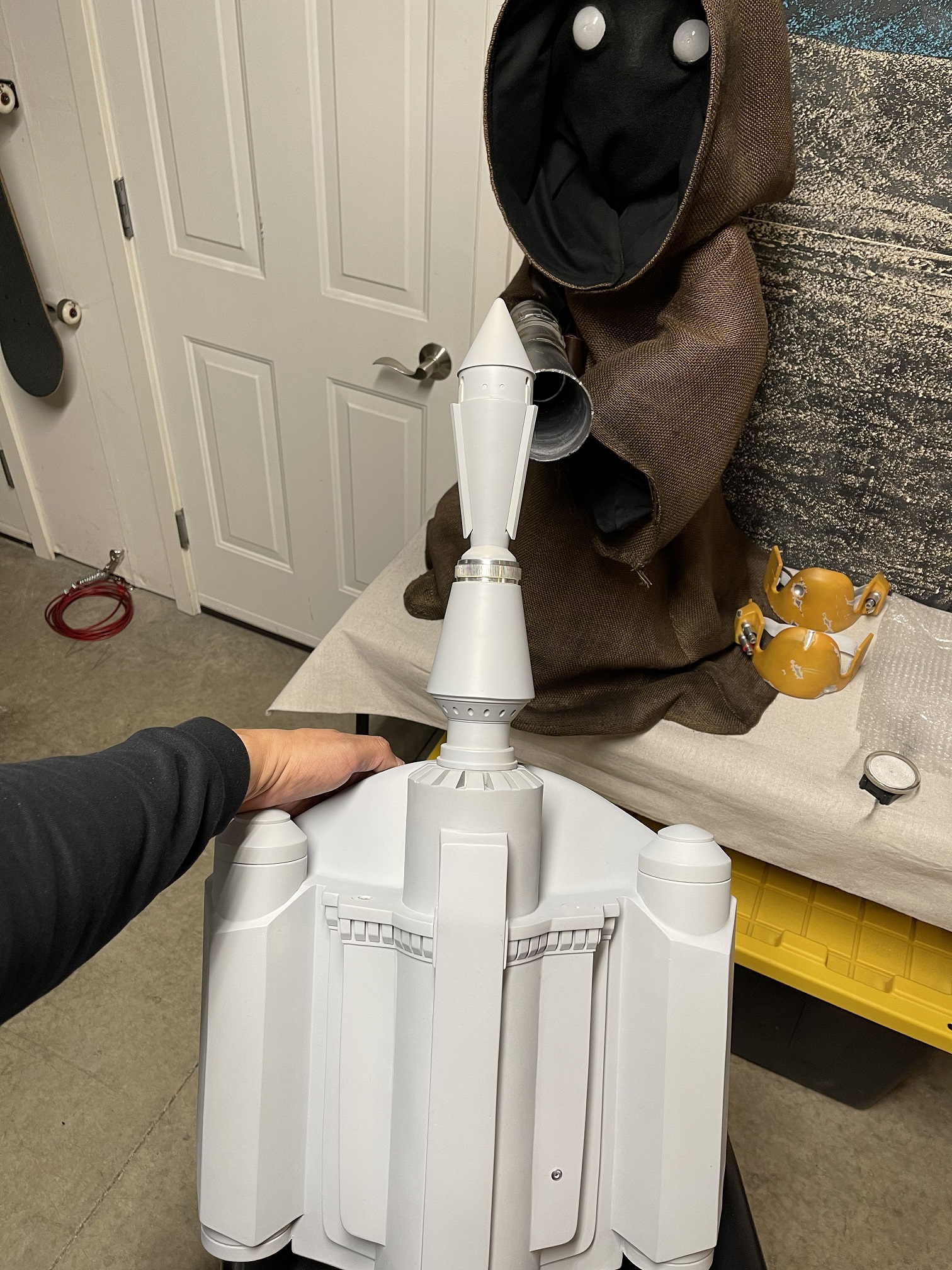 I'm not sure there has been a documented process on this, for those of us who have a Boba Maker Jetpack and an MCR Collar - till now. But here ya go!

Painting to commence this week and next! I took PTO ALL next week to hopefully bring my Jetpack closer to the finish line!

TDH PREMIUM MEMBER
**Jetpack Update**
A slight setback happened today, but for the better in my opinion. So as I said in the above post that the Rocket would most likely have to endure a great deal of sheer force to come undone....turns out that the amount of torque I applied to my wing nut solution was enough to snap off the threaded part of the rocket where the modification for the bolt was made. <Sigh> 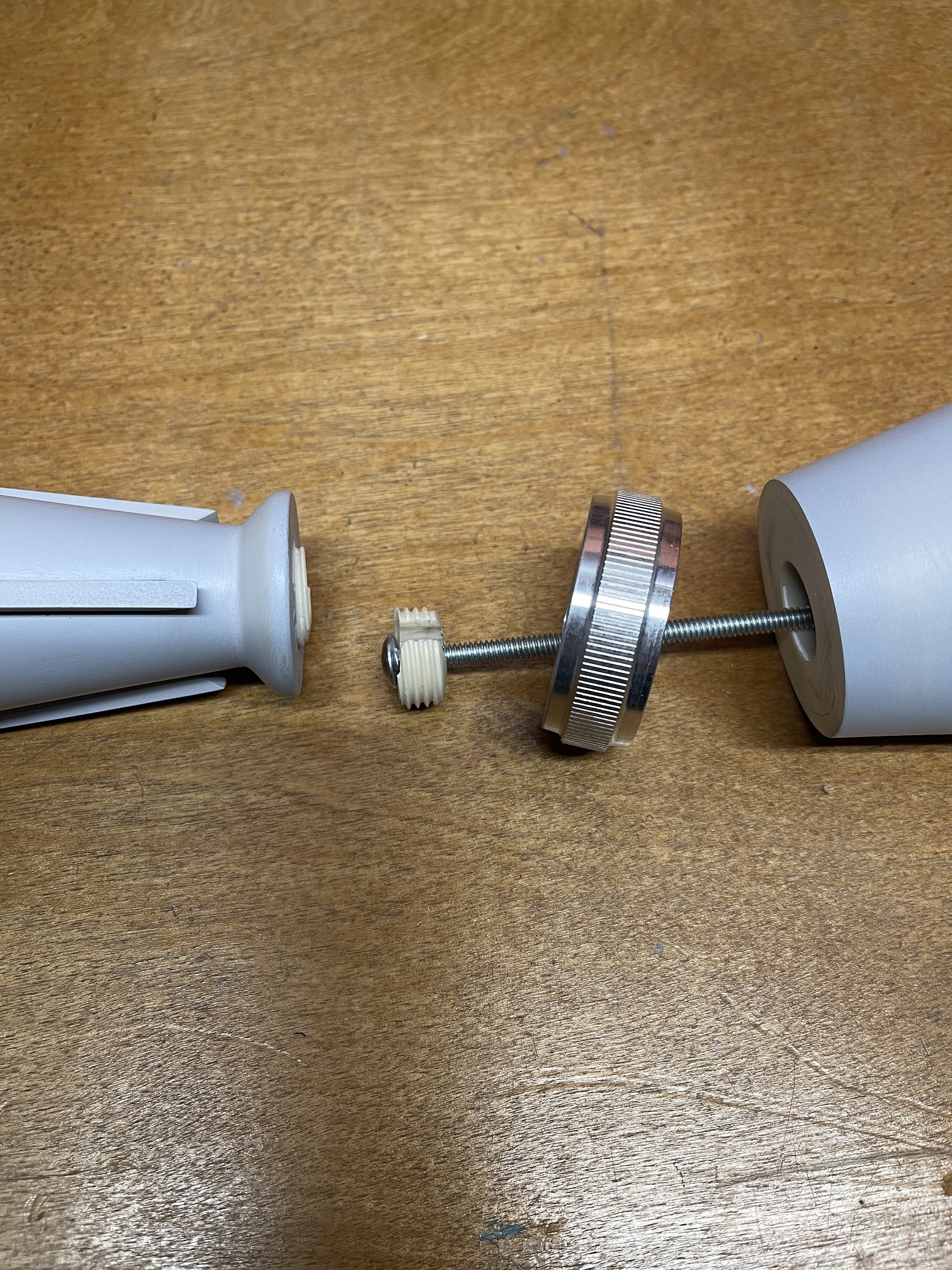 Back to the drawing board. So for those who ever wanted an in-depth look at the anatomy of a Boba Maker Rocket - Here we go. So when Boba Maker assembles his Jetpack, he does so in a way that it nearly impossible to undo and for good reason. I liked my idea of using a bolt method. But I did find that you could remove the bottom part of the bottom half of the rocket....

That's one issue solved. Now I don't have to use a janky wingnut. I can use a proper Fender Washer, Lock Washer and Nut! 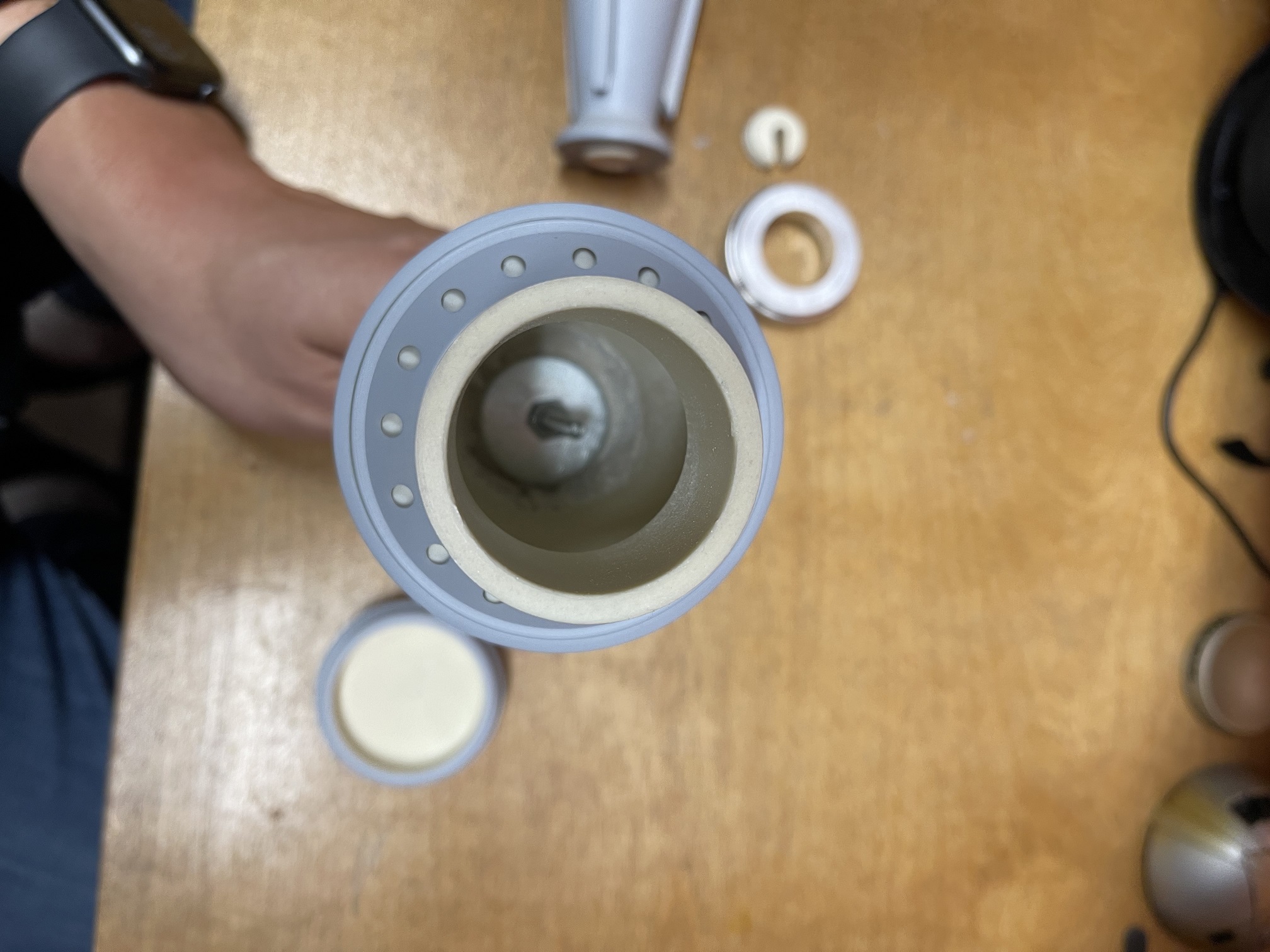 Now for the top portion. How to get that bolt inside and god willing, with a washer too. I was able to pop off the very tippy top of the rocket! I gotta say forcefully trying to do so made me so nervous. But here are the fruits of that labor! …And yes, this took about 2 hours of using my hand to pull this thing apart - getting angry, taking a break and going back to it! 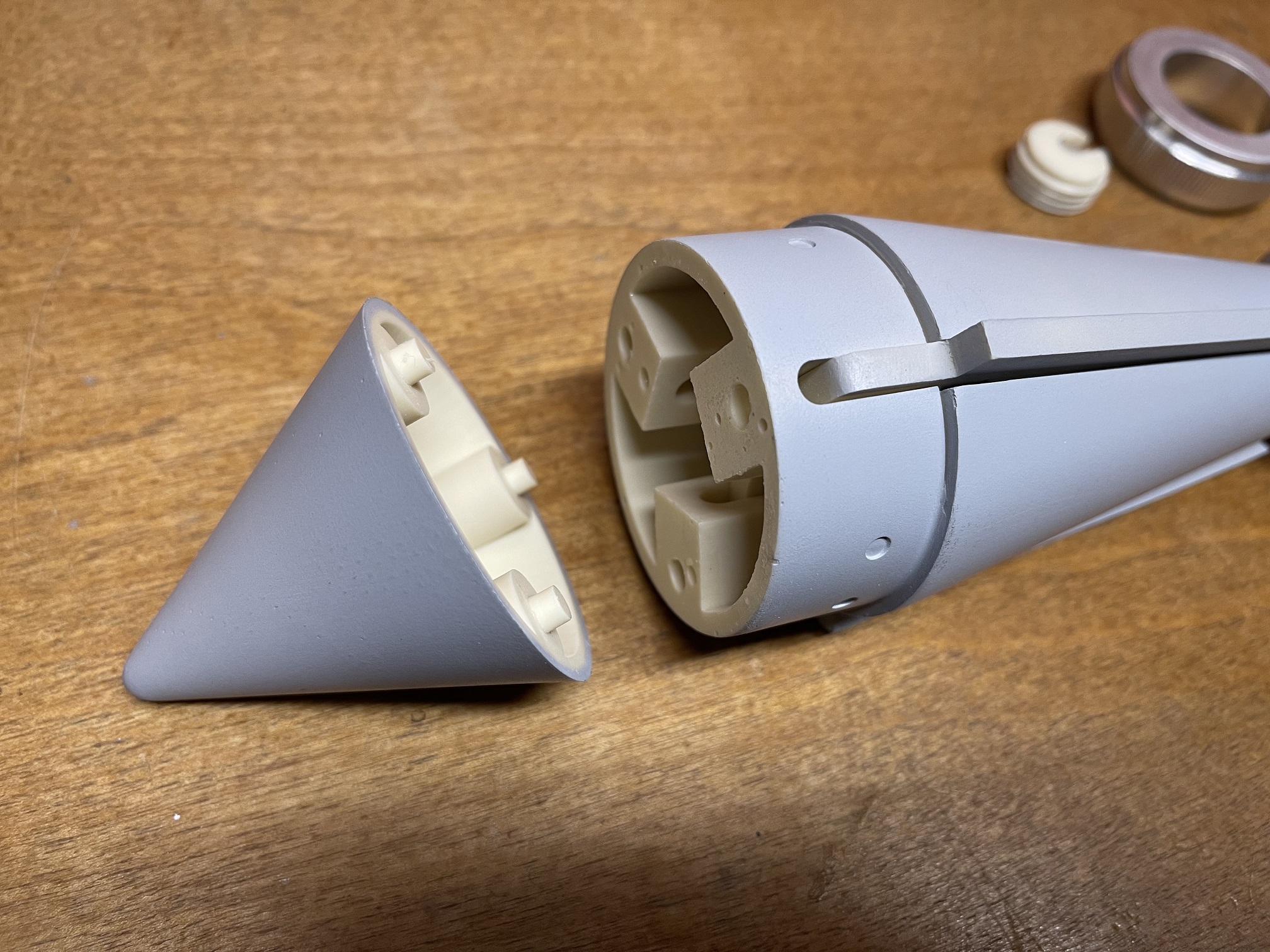 ...And what does it look like on the inside? Well as it turns out I'm able to put in a 1/4 Washer (Which JUST fit - perfectly, I might add!) with my Pan Head bolt and I was back in business. 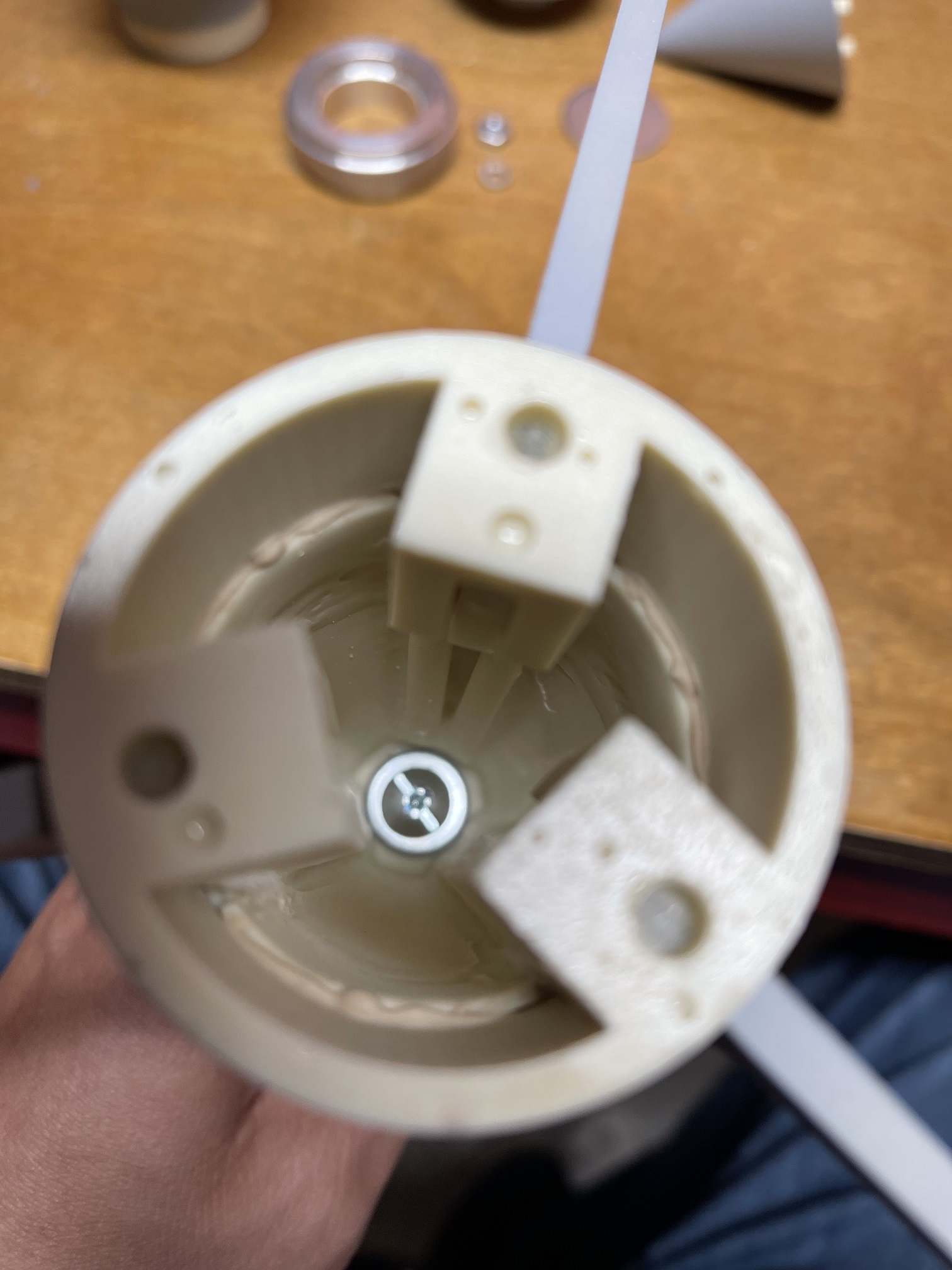 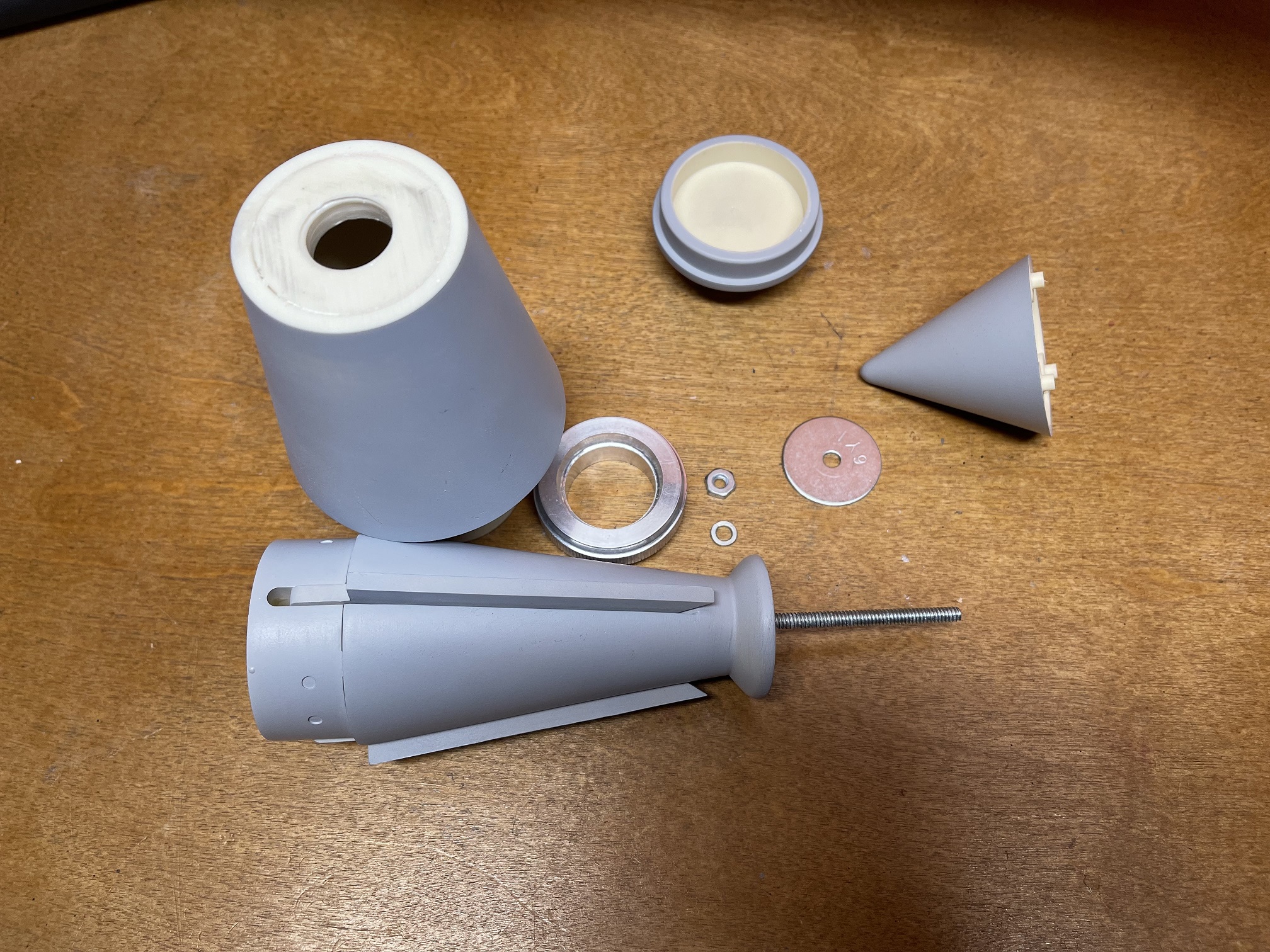 Also if there is some concern that the torque will cause this to break again. Well....I can tell you it is solid resin from point A to B.... 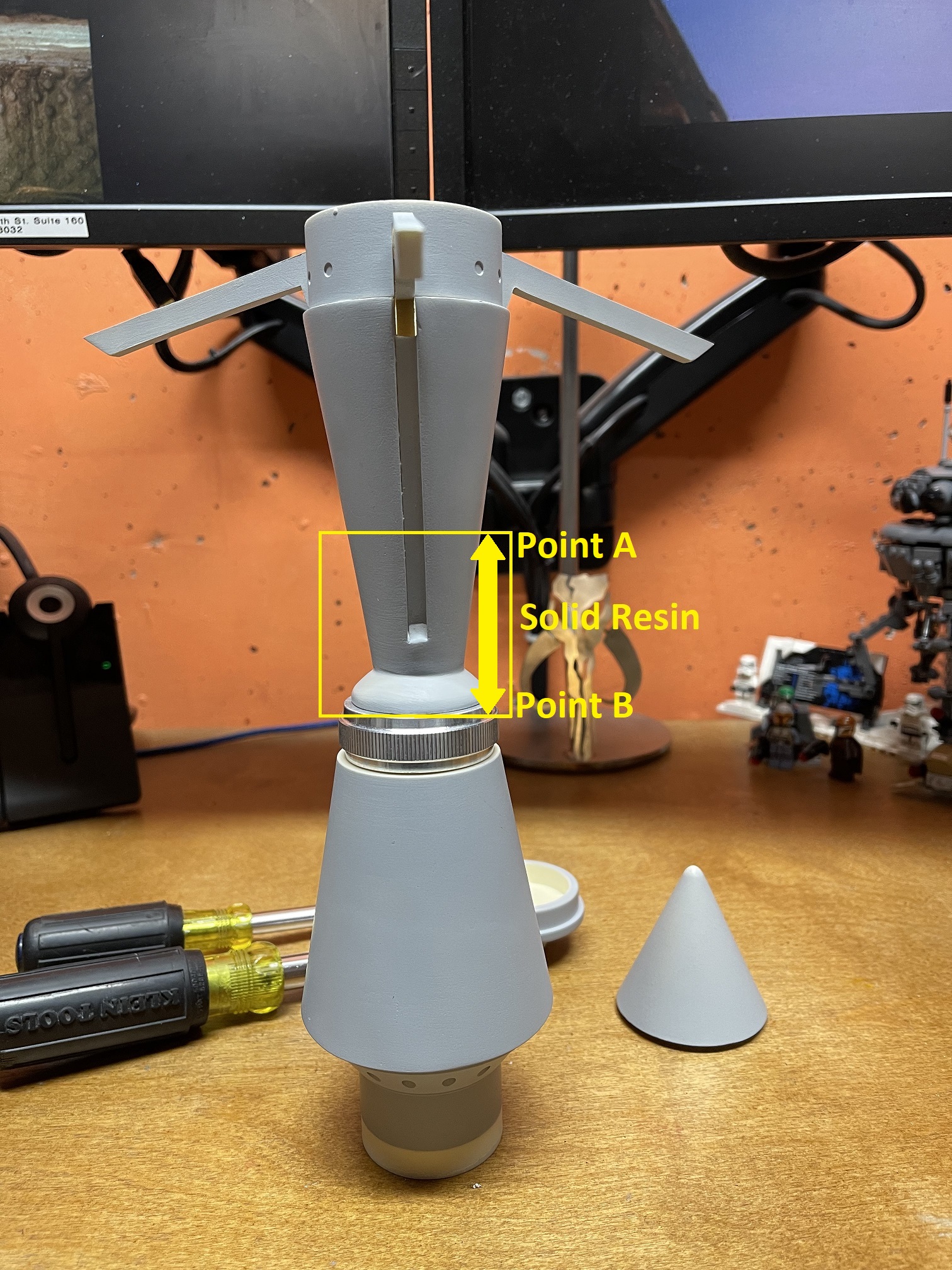 I'm supremely confident now that the only way this comes apart again is if it breaks. 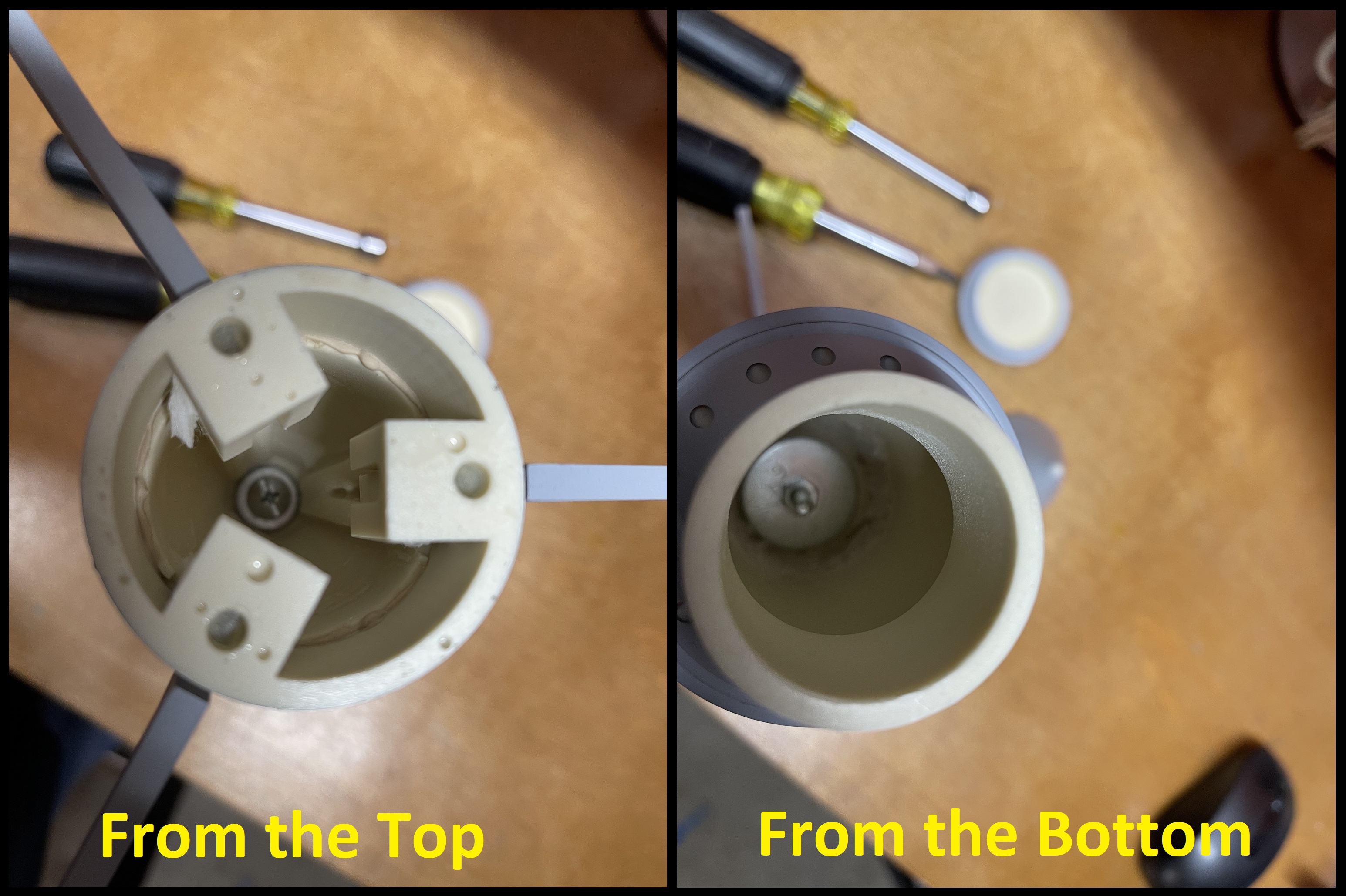 I mean geez la weez, such an ordeal, but it had to be dealt with! And I like the improved design to boot!

Here is the product now! 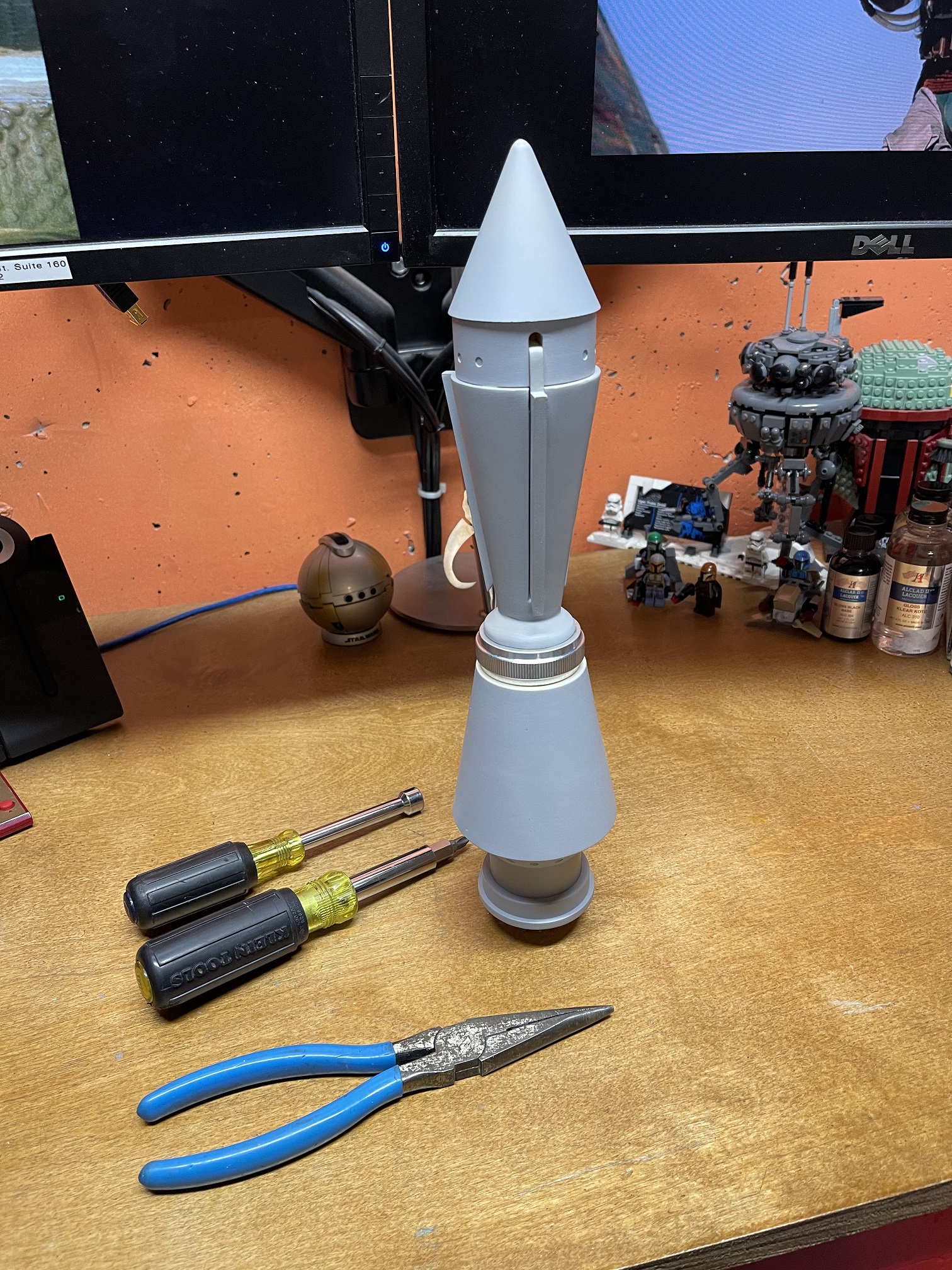 I mixed up some JB Weld Plastic Bonder and Secure the Machine Craft Replicas Jetpack Collar to the Bottom part of the Rocket and let it sit over night. Then come tomorrow secure the other half with the bolt and then seal up both ends! At THAT point I should be able to call it good! 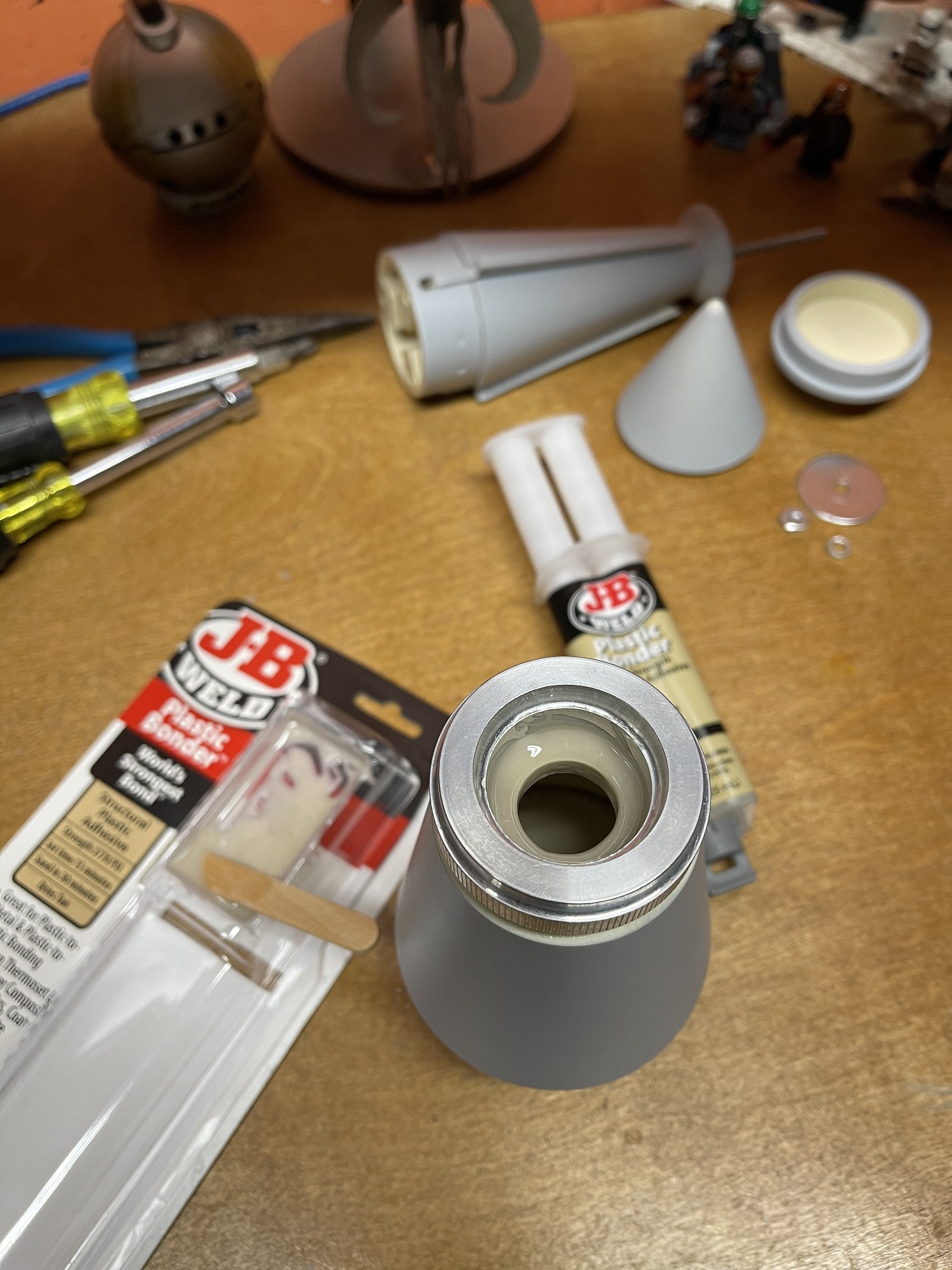 This morning I got my Upper Rocket attached with JB Weld Plastic Bonder And once dried I was finally able to toss some Tamiya Chrome/Silver (X-11) on the Jetpack, after which I sealed it. I'm gonna give it the night before I liquid mask it then apply my Royal Blue. 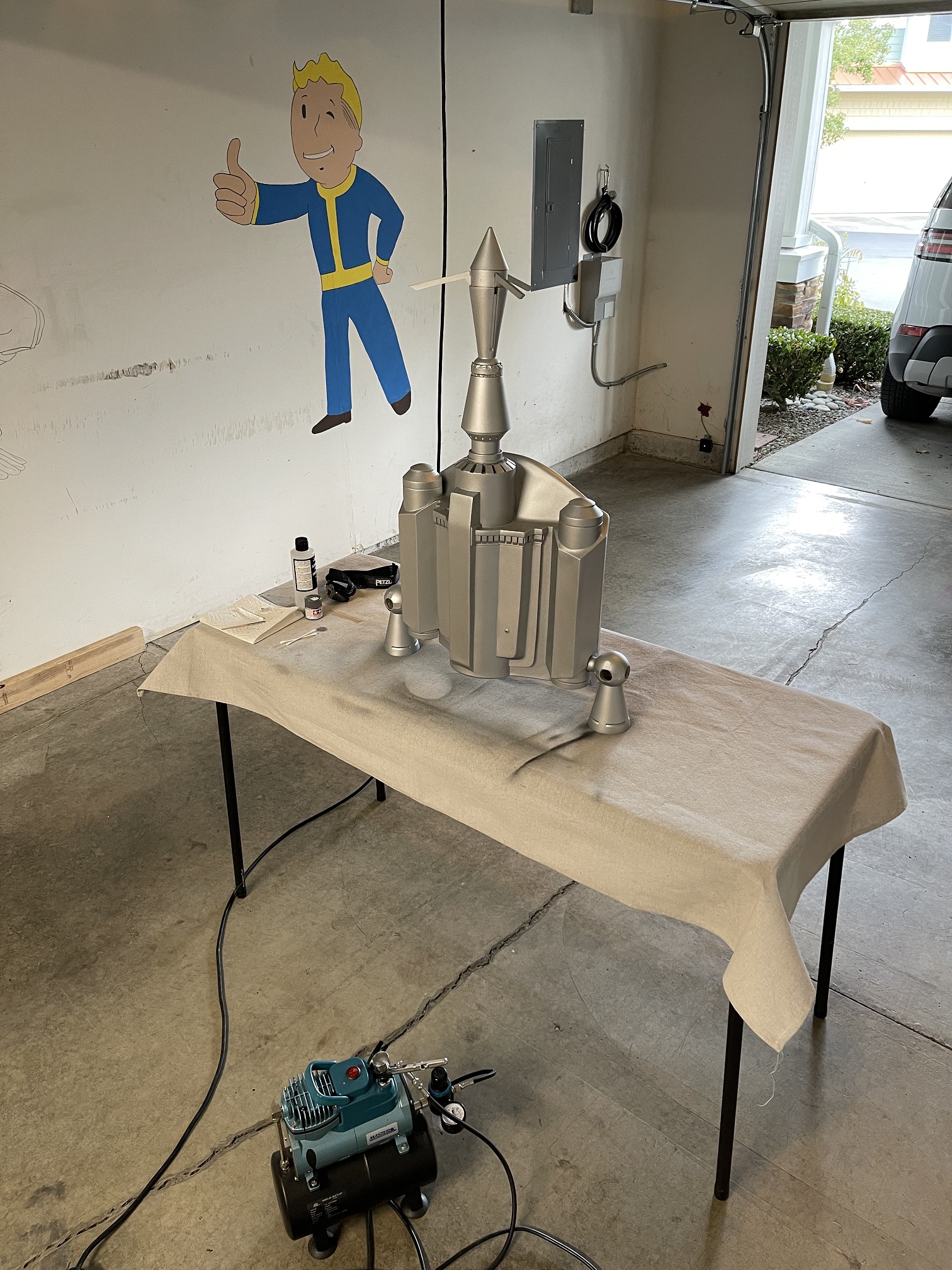 TDH PREMIUM MEMBER
So, I took a pause on the Jetpack but will continue painting this week!

See.....this is the kinda stuff that gets me me into trouble.....pocketbook wise.

And one of the reasons why my current spend on this ROTJ Fett went from a budget of $1500 to well over $5k now. This is just another example in that there are way too many cool and awesome things I simply couldn't say "No" to.

So, I got in touch with BH-51512 to inquire about his Range Finder Servo setup, and I ended up getting from him:
a) Machine Craft Replica's - Metal Hollow Stalk
b) Topper
c) Hand Cut Acrylic Block
d) 2 Red LEDs for the Topper
e) 1 White LED for the Acrylic Block.
f) Glove Button with Transmitter and a 2X CR2032 Power Supply
g) Servo with Receiver and 4X AA Power Supply

You too can get in on this awesome kit, the link is: Wireless Rangefinder Servos - Brandon allowed me to customize this kit, I got the upgraded Stalk and glove button. It is a really a nice kit and Brandon has gotten high praise from many here on TDH. So I ordered one. It took a bit of modification to prep it, but I got er' installed!

I just need to get the button installed onto a glove. Thankfully the "Happy Trooper" over on YouTube has given me an idea of where to go with that. (I only need to find a spot for ONE button) 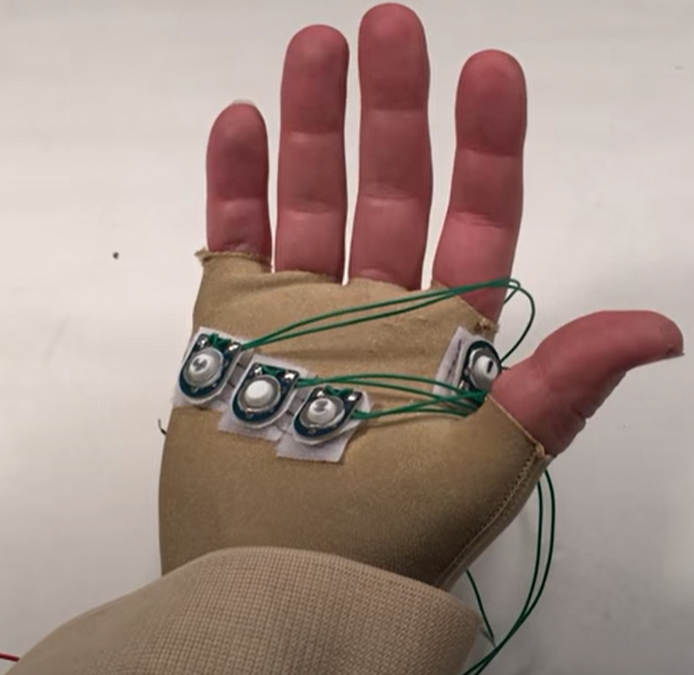 And since we really don't see Boba Fett engage his Rangefinder in ROTJ, I figure I'll just hit the button with my ring finger and like in the Mandalorian take my thumb up to the ear cap, like this....

But I'm pretty stoked in how it all turned out!