Greetings crew. I know there have been some discussions before, but thought for anyone interested, seeing as I am looking to do an ESB paint up of the screen displayed helmet, and not with the extra nicks and damage of the AOSW helmet, to document the areas that are differrent, and for anyone keen to add some input. These yellow highlighted areas are some main things I see as differrent, and there are the obvious black scuff marks not present on the screen used lid. I am also interested to see what people think of the orangy/rusty scuff marks mainly on the back of the AOSW helmet. There aren't that many hi-res close ups of the back of the screen helmet, but from what I can tell, they dont seem present on the screen one.

my ideas so far (please feel free to add or dispute - they are not set in stone, only what I see) :

In ESB most of what you said is true....in ROTJ for the SE guys its not. All that stuff was there from what Ive seen of the SE pics and such
Last edited by a moderator: Jul 25, 2017

I think that rust stuff is really rust also
Last edited by a moderator: Jul 25, 2017

Fett 4 Real said:
In ESB most of what you said is true....in ROTJ for the SE guys its not. All that stuff was there from what Ive seen of the SE pics and such
Click to expand...

For sure mate, but this is probably a good time to clarify that one thing I do want to get across, was that the idea behind starting this thread, was to simply highlight the differences seen in the AOSW helmet (which will generally be very close to the SE version, if not almost exact), VS the helmet seen in the Empire Strikes back movie. It wasnt designed to spark a debate about what people do or don't consider the 'DEFINITIVE' esb Helmet, simply to point out what we do know - that yes, its the same helmet, but there ARE subtle differences due to mishandling, age, neglect etc between the two. And I just thought compiling a list, may give people that do want to do the ESB movie version as accurate to that time frame as possible, some solid guidelines to follow, while possibly helping to educate some people who may be new to the idea, or simply weren't aware. It also seems more common that people recreate the AOSW lid, particularly as there are more and better reference pics, but there may be some who want to enjoy the challenge of doing the Screen used paint up, and with far less reference and evidence, every bit of info we can get together helps. So enjoy people, and please feel free to include input! Peace
Last edited by a moderator: Jul 25, 2017

I agree with you for sure, like it seems the repairs may have been made to the brow durring or before filming? There may or may not have been a crack on the right cheek area, I say there isnt video capture but some people claim they can see it.
Last edited by a moderator: Jul 25, 2017

true mate, those two you mention are very tough to pinpoint, although I know Spideyfett put some good examples of repairs which likely give evidence that the wavy brow IS actually there, and not just an optical illusion. I personally believe the wavy brow is present, and I think his pictues definately at least show there was work done to the area. Exactly how much of a wave, is going to be difficult to nail down. The right cheek crack - at first, I thought it was AOSW only, but on examining photos, there are some angles where it appears that it could indeed have been present in the movie. With both of these, i will wait to see if we get any more opinions, and will make neccessary addittions to the list based on what the majority think..

To add to the list:
Screen used RF upper ear has little "T" marking under the big black arch. It's pretty much worn away on the AOSW helmet.

spot on fellas, thanks for that. will update the list..

net to #10 the blotch of silver on screen theres no curved line if u look at the two pics...the scratched off area is black on screen

Fett 4 Real said:
net to #10 the blotch of silver on screen theres no curved line if u look at the two pics...the scratched off area is black on screen
Click to expand...

Very good eye mate, that one I actually hadnt noticed. props to ya bud. Im imagining I don't really have to mention the blue marker, as its so obvious, and it seems most dont include it, even on AOSW paint-ups, likely as it just looks a little ugly. Ill add it to the list, but again, a pretty obvious one..

I'd like to contribute a bit in this department regarding ESB damage vs AOSW damage, or as I refer to as "SE" Special Edition damage, since it's a "motion picture" prop I like to think in terms of how it was seen on the silver screen. Being a painter and always chasing the ever elusive "perfect and accurate" paint job I've become very fascinated with the colors and the details in the damage on this helmet. Over the course of feeding my obsession with research, studying reference photo's and screen caps it is blatantly obvious that in the Star Wars films there have always been issues with continuity and Boba Fett is no exception. I've come to the conclusion that some damage seen on the SE helmet may have actually happened on set during the filming of ESB and may be visible in some ESB scenes and not in others. This can also help determine which scenes where shot first and when some reference photo's in the archives were taken based on whether or not specific damage is visible. In this post I will only be talking about 1 specific piece of damage that I think will really help and give insight specifically to painters trying to determine which pieces of damage to add to their paint job.

The damage I want to address is the damage on the left mandible just below the T-visor about 1 third the way in going towards the left ear. This damage is clearly seen in many Hi-Res reference photo's after filming ESB. See the image below.

Let's examine the scenes in ESB in chronological order to see if the damage is evident.

1) The first scene is on the bridge. (EVIDENT)

2) The second scene, Slave one Cockpit Scene. (Inconclusive)
-We do not see the left mandible due to camera angle

3) The third scene, Bespin Dinner Scene. (Not Evident)
-This one is difficult because the camera is at a distance decreasing the resolution. However the damage is not evident in screen caps.

The damage is not evident in reference photo's during this time frame either.

-For screen captures it is Inconclusive because the camera distance is too far and the EE-3 blocks out the area of damage in review.

-For reference photo's it is clearly Not Evident During this time frame.

7) The 7th Scene Last Scene in ESB, Slave One Ramp Scene. (Not Evident)
-Although this scene is dark in lighting it is still not evident.

8) Archive Reference Photo's
-White Hallway Shot's (Not Evident)
I'll only post one photo to show this but feel free to scan through the archives and you'll see that it is not evident in any of the white hallway reference photo's from the archives.

So in conclusion, I think they shot the White hallway reference photo's, the Bespin Dinner Scene, the Bespin Hallway Scene, and the Slave One Ramp Scene first before the Hero Helmet received the physical damage. Personally, I think that it's a scuff of some sort and could have easily been brushed up against something since the location of the damage is on the surface that sticks out the most.

It would be cool to get some more information if anyone has it regarding the timing and sequence of the ESB Boba Fett shots filmed.

As a painter I like the added detail in damage so I am going to include it on my ESB helmets unless specified or requested as a Bespin Dinner, or Bespin Hallway Specific ESB Helmet.

Hope you guys find this stuff as fascinating as I do. I'm sorry if this had been addressed before, I couldn't find anything on it while working on my latest commission so I thought I would share. Anyways, Cheers!

According to the On Stage Chronology it seems that only on the hallway scenes (Fett transporting the HiC and shooting at Luke) that smudge (at least that's what we thought it was) is not present, so we can assume that the extra scratches were "accidentally added" somewhere between April 12 and 25, 1978.

RafalFett said:
According to the On Stage Chronology it seems that only on the hallway scenes (Fett transporting the HiC and shooting at Luke) that smudge (at least that's what we thought it was) is not present, so we can assume that the extra scratches were "accidentally added" somewhere between April 12 and 25, 1978.
Click to expand...

Based on the stage chronology you posted, I think that the first Black and White Photo of Boba Fett I posted in line 3) from the archives is in fact from the Bespin Hallway scenes and not the Bespin Dinner scenes. I was basing my research based on the description of the archived photo, it's labeled as "Bespin Dinner" I think it could be re-named based on this evidence since the smudge is obviously not present in the photo and the big gray stain on the left gauntlet isn't present yet either.

That image is definitely from the transporting the HIC scene. Also the scratches are there in the dining room scene: 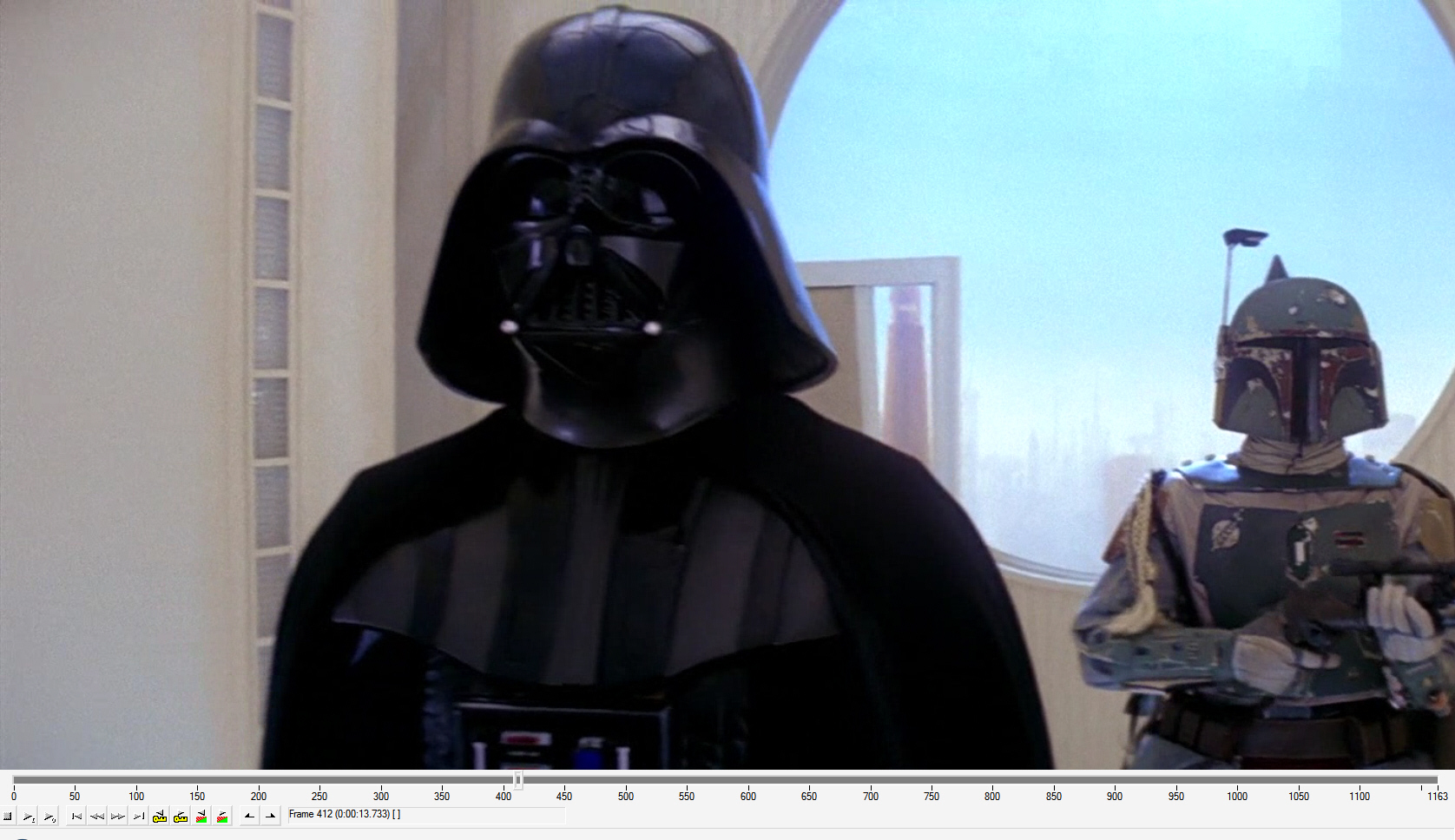 TDH PREMIUM MEMBER
Damn, now I want superjedi to fix my helmet and make it the most accurate ever with new colors and everything!

But I do see those smudges on that picture RafalFett posted.

I've always thought of those as drips from the tan/rust "spatter" that's all over the front of the helmet.
And rnbuda, those marks are on your helmet. They may look a little more subtle, but they're there. 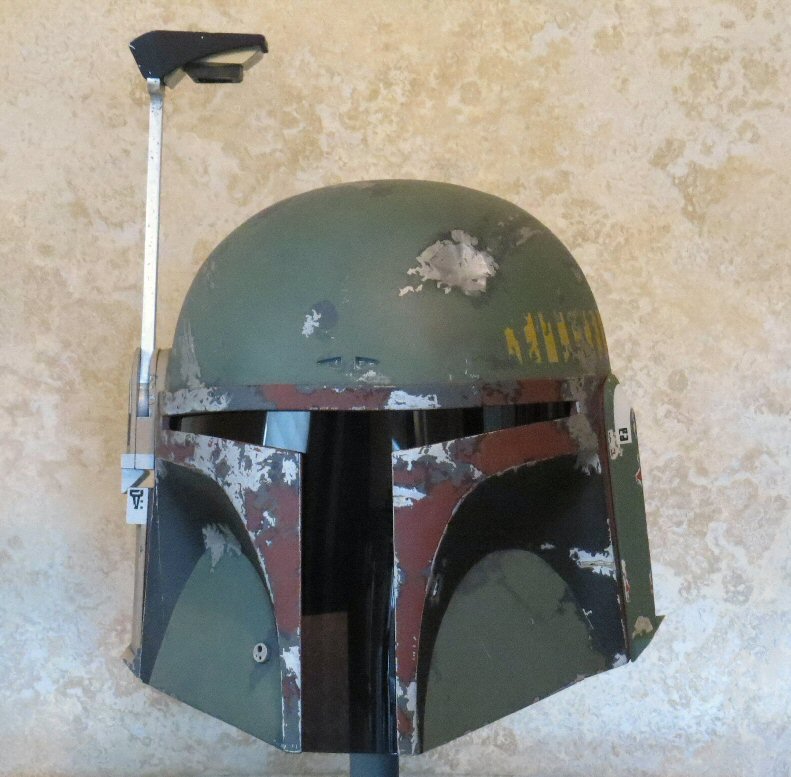 superjedi said:
I've always thought of those as drips from the tan/rust "spatter" that's all over the front of the helmet.
And rnbuda, those marks are on your helmet. They may look a little more subtle, but they're there.
View attachment 167938
Click to expand...

Damn, I looked last night after I posted and saw them...too lazy to edit...

Lol. Well maybe you would have noticed them if those Halloween decorations weren't in the way.

Tuesday at 12:54 PM
The FreshMaker

Tuesday at 12:54 PM
The FreshMaker