First the big grateful thanks to allof the following that have helped along the way with questions I had. The help ranges from a simple reply to a thread to the amazingtemplates and guides I followed. All inspired me along the way toget this done. And of course it goes without saying that without ArtAndrews this would not have been possible.
Thanks to the following members: @Art Andrews @RafalFett @Darth Voorhees@tjr2d2 @Malkavian @jbdubz @Rogermaximus @dms54nyc @ryan101011@Funkyred @Gregory @Mike M. @Level3Fett @Slash @Mace74 @01Hawk @mainst69 @Armydad @JimmyC @drokkul @Raizo @DeathProof @Jesuit24 @Major @intwenothor @syllander @superjedi @vaders right hand @LynnTXP 0369 @cbrant @animefan @SigSavage @Hunter930 @rnbuda @tk16180 @full metal fett @Gator Fett @Syper @Arkady @Delta13Mike @woodman @toolguy301 @Man of War Studios @Sidewinder
From a Noob for aNoob: Re-Telling of my first Troop at Denver Comic Con 2016

For anyone whois new to this site with the end goal of one day wearing this costumeto an event I would like to share with you my first experience. Iarrived at the Denver Comic Con 2016 event at about 10:30AM on Sundayand left at 5:30PM. Through these fun, albeit LONG, hours I was ableto verify for myself many things.


If you put your heart into this, itwill pay off
If you follow the guidance of the proshere on TDH and dedicate your time and effort to be meticulous theresults will cause you to be a celebrity. The costume will have somuch detail that people will not be able to resist mobbing you withquestions and requests for photos. The mere fact that you are BobaFett will draw them in, but the details will keep them there andsolidify you as a badass. In one day at Comic Con I took over 300pictures and handed out 250 business cards. I had long conversationsabout all aspects of my costume from head to toe. Be prepared and beready to have the patience of a celebrity because you will be really,really popular.


Something will absolutely break
Don’t be too down on yourselfwhen/if this happens. For me I lost the red dental file (apparentlyvery common) off of my right gauntlet. At the very end of the day,waiting for the elevator, I took a step back to let some people offand I stepped on a stroller, braced myself to prevent a fall andwhacked my flame thrower against the wall. Luckily it only broke atthe glued joints and not a true break. I would suggest that youalways have a spotter that isn’t in a costume with you. For me itis my Sister/Manager. She always stayed ahead of me so I could gaugedistance as I stalked around the crowds. This person will also serveas your eyes. Unfortunately for me, my sister had gone to therestroom when I broke my flame thrower. Else, she would have warnedthat a stroller had crept up on me.


It will be HOT


I installed two tiny squirrel cagefans at the corner of the visor that I could control with the flip ofa switch. I also used some rain-x on the inside of the visor torepel fog. Between them both I never fogged up and kept cool andcollected the entire day. When I kept the fan off though I roastedand fogged a bit and the sweat inevitably found its way into my eyes,blurring my vision. Install fans and utilize the rain-x.


My tips for a successful Boba Fett:


This build is not 100% and I didn'trealize until too late that my assistant mounted my cape/stud wrongwrong (facepalm) and that I actually attached my yellow braid alittle high as well my left shoulder needs to be higher. I am alsomissing a Nemrod holster/sidearm as well as the photo squeegee shintool. Once I get it all nailed down I will submit to the 501st.
I have an estimated 80-90 hours or sointo this costume. I started my first inquiry Jan 2015 and finishedthe night before Denver Comic Con on the 19th of June. Itis expensive and life gets in the way and I am not really sure of theaverage time it takes to put this costume together but I feel prettygood about it. My first purchase was the helmet and I let it sit fora few months so I think my 80-90 hours was across a year or so.
A few details you cannot see areinstalled fans in my helmet, my working gauntlet light, motorizedrangefinder, working air for the thrusters as well as smoke for thethrusters. The thrusters are lit amber constantly as well as thecenter rocket exhaust. When I hit my air button bright white LEDscome on in the thrusters as well. I am working on compiling all ofmy pictures and videos into a tutorials so video of the jetpack willbe included in there.


Jetpack Harness: Shapeways and strapsmade by me


Girth Belt: Self Made


Shin Tools: Self made


I have attached some pictures. Inaddition to my Boba Fett build I knocked out a Sabine Wren season 2in a week for my daughter to come along with me. That costume isprobably like 80% accurate. I had to take a few shortcuts andcompromises to get it done in time but I think it turned out great. This was truly just an amazing experience for me and I really lookforward to future events. The day we went (Father's Day) really wasa blessing for my daughter and I. Again thank you so much toeveryone on this site. Thank you Art for running this site. Thiswould surely not have happened if you all didn't exist. I hope thispost lends some inspiration for current and future Fetts alike.


Thanks for taking the time to readthis. 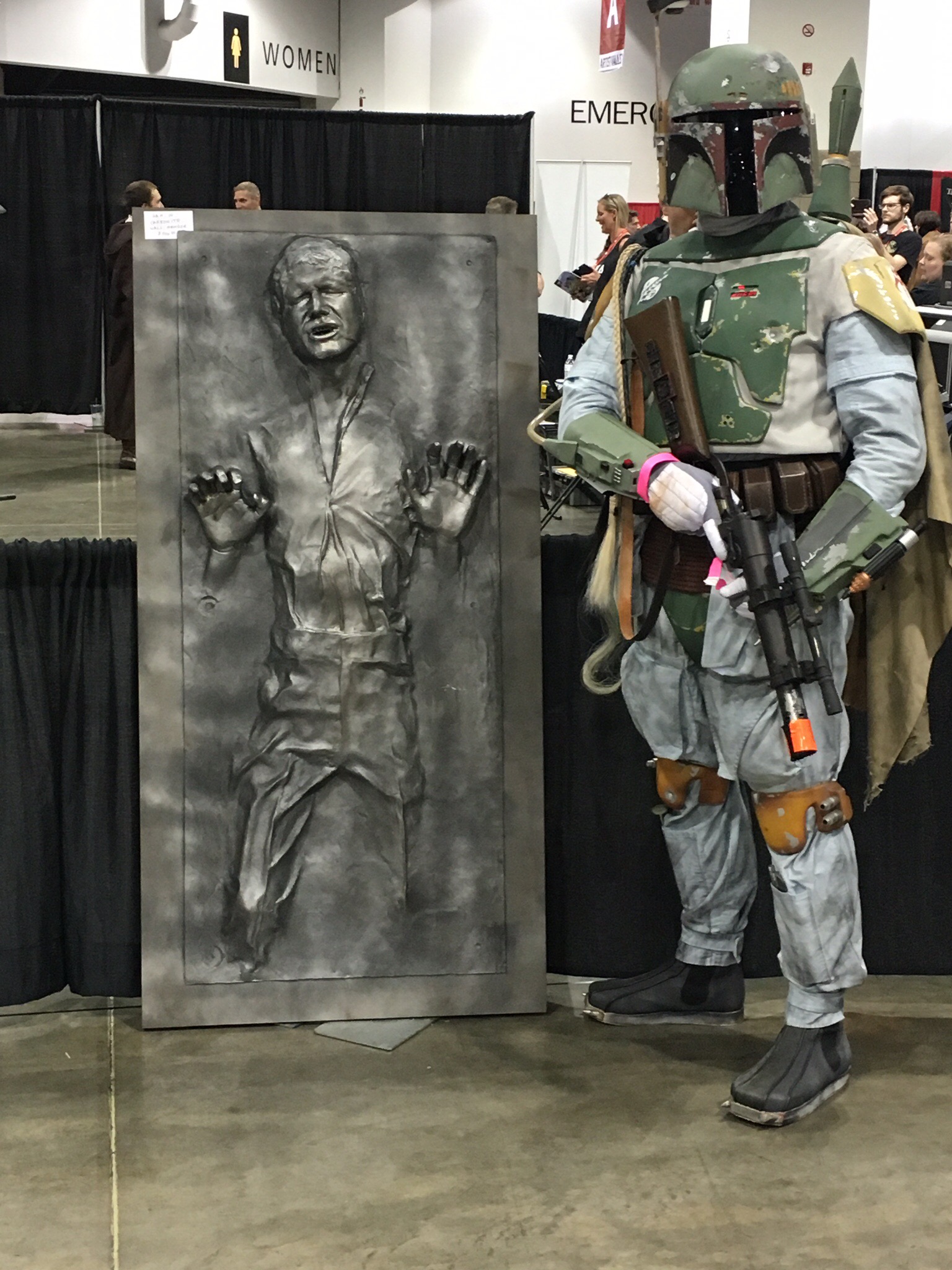 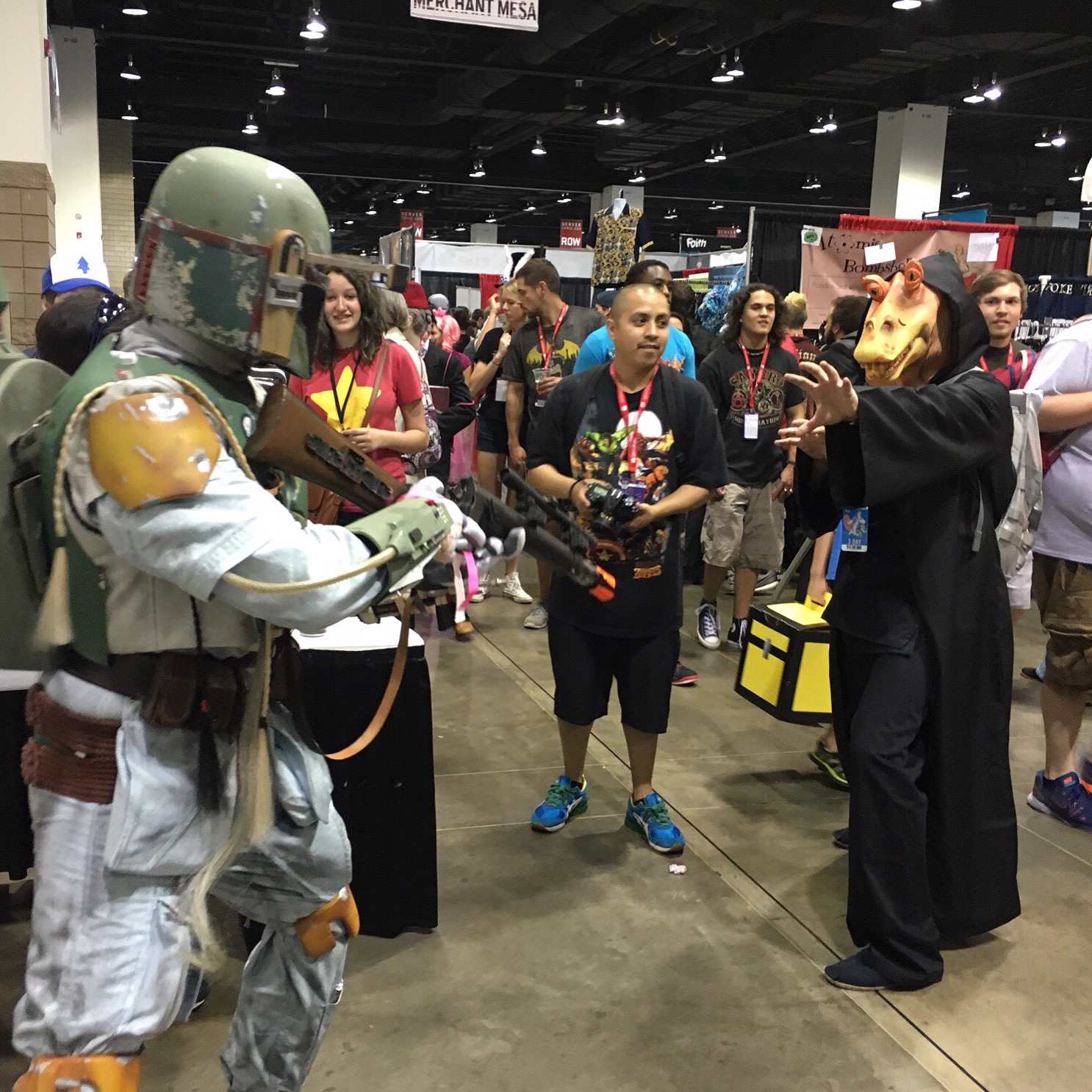 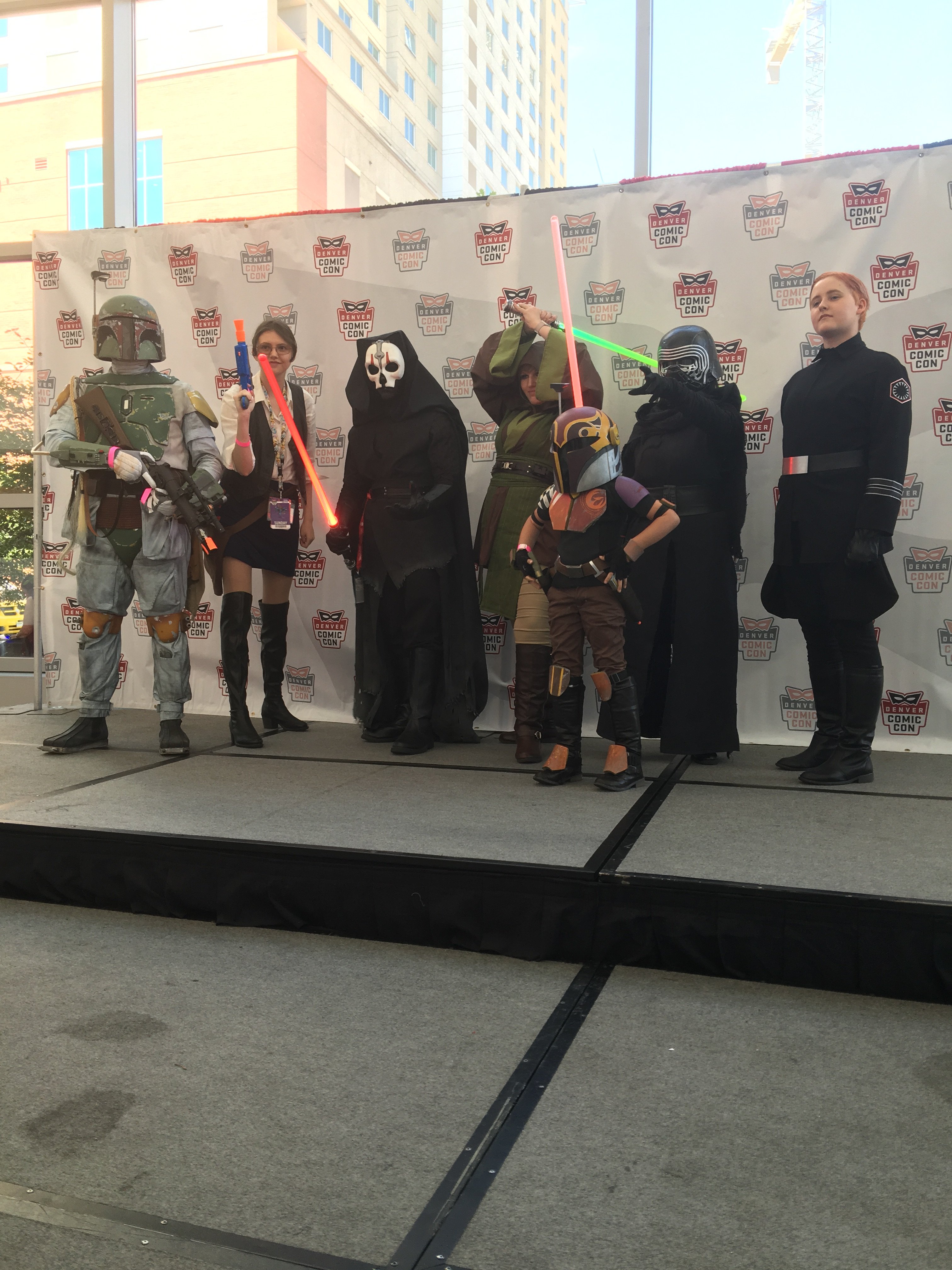 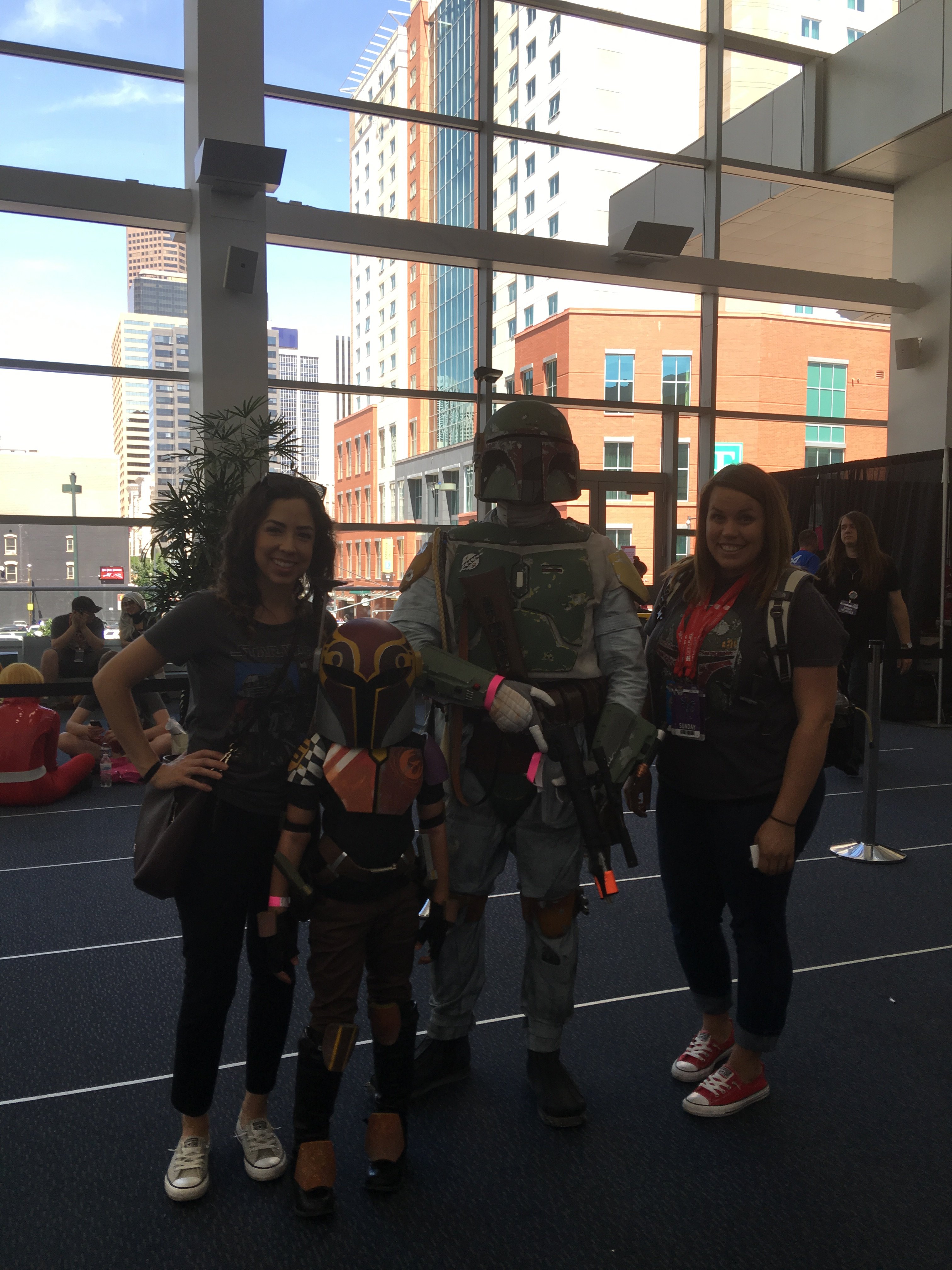 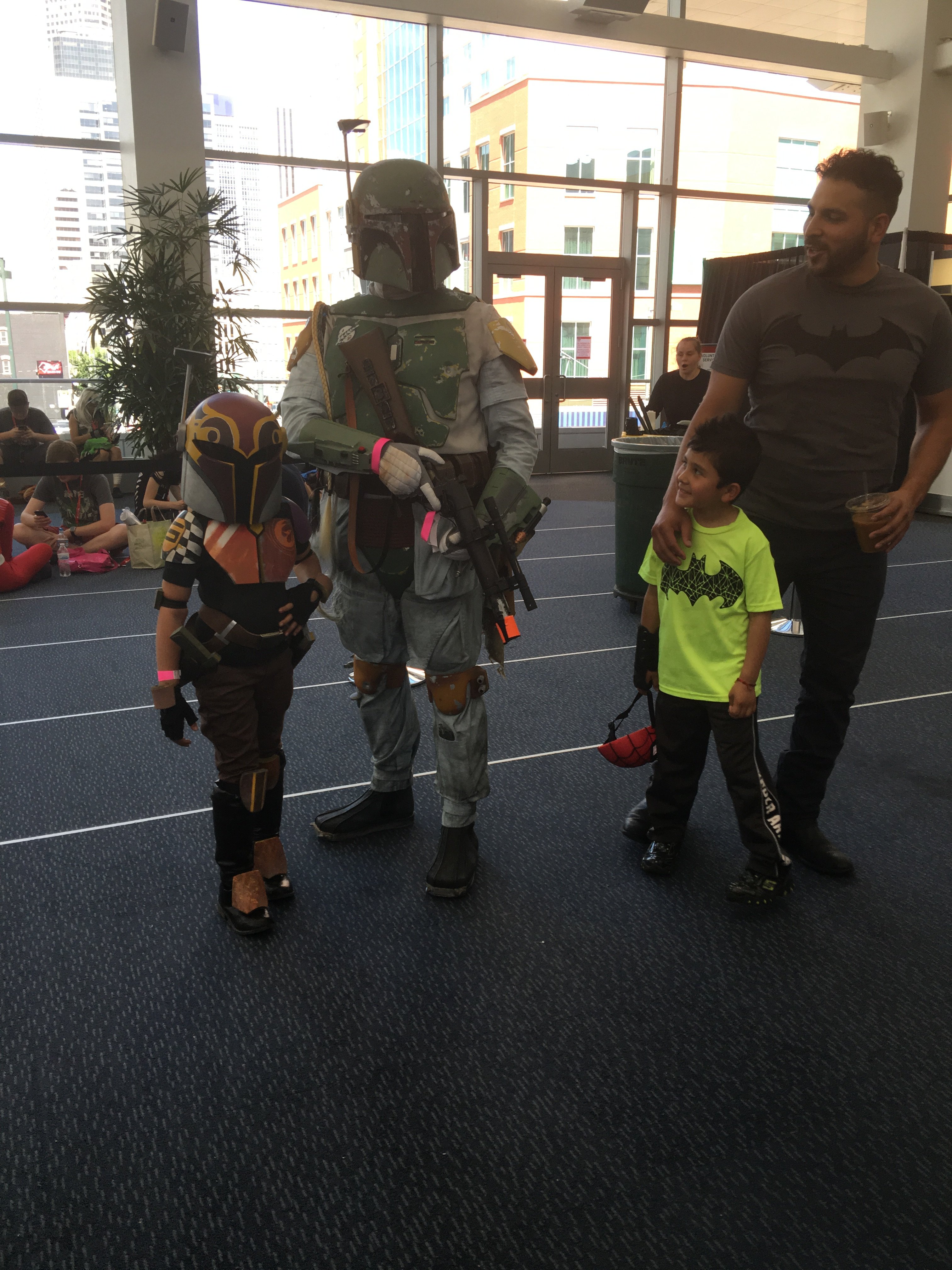 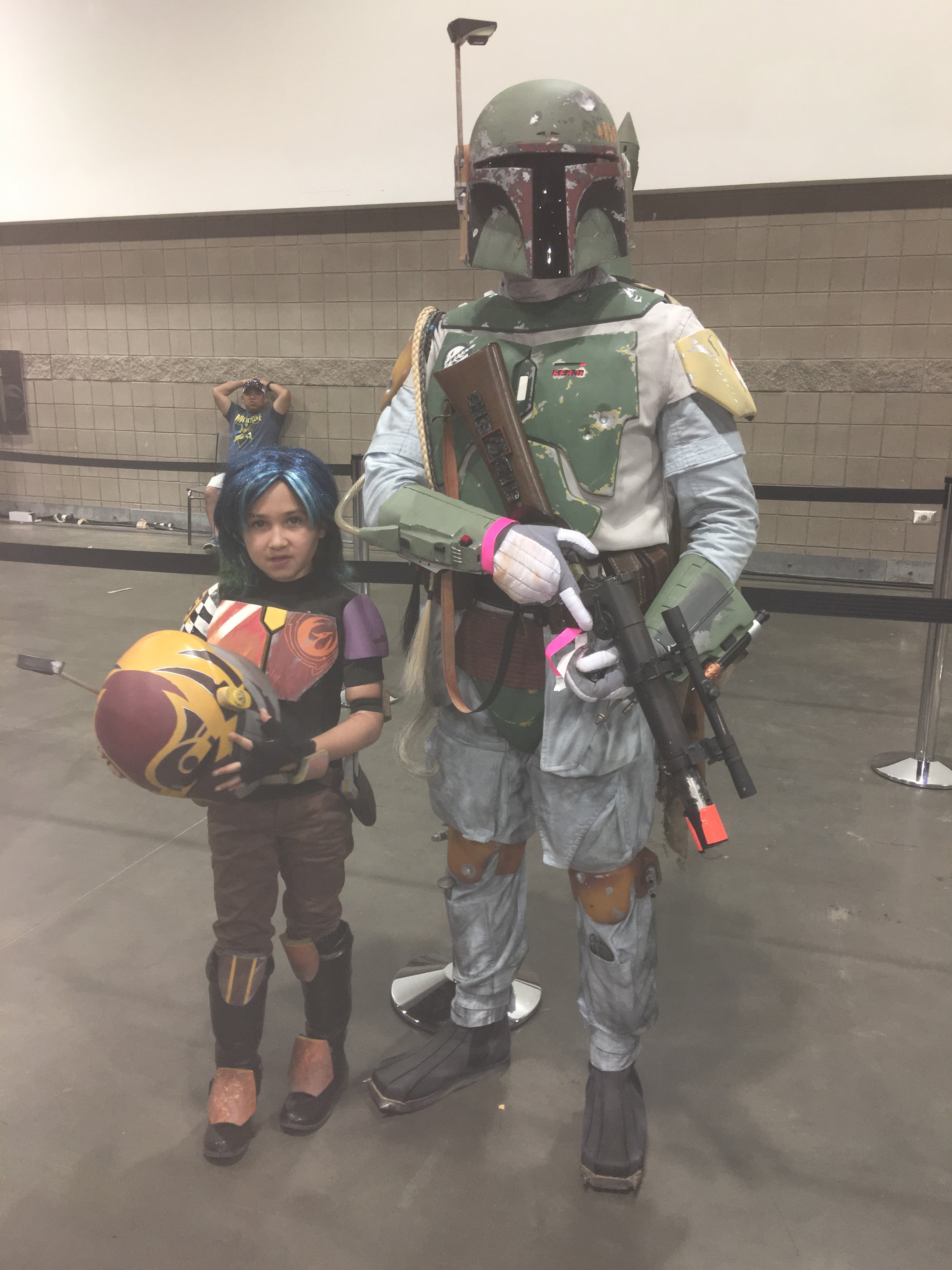 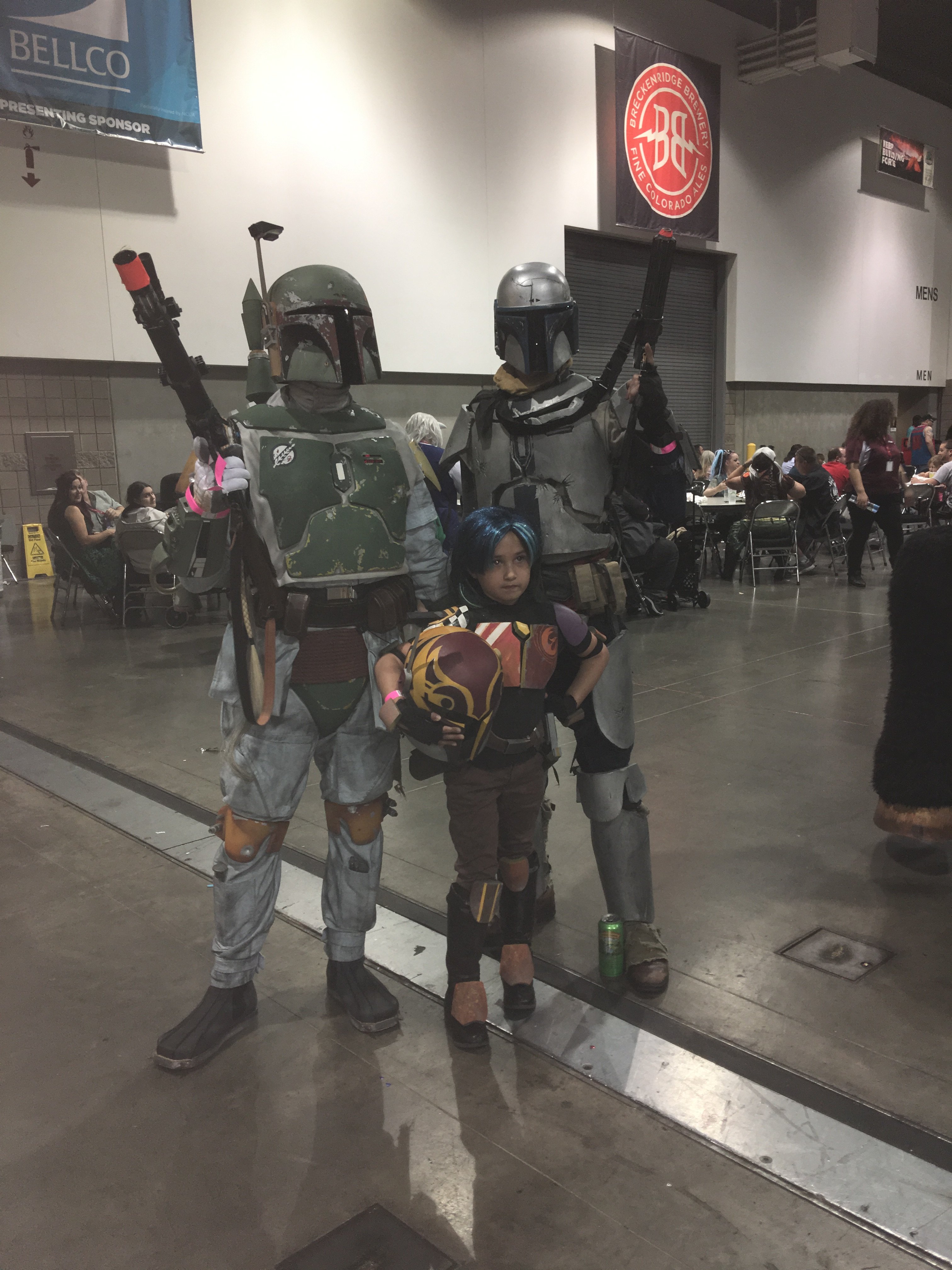 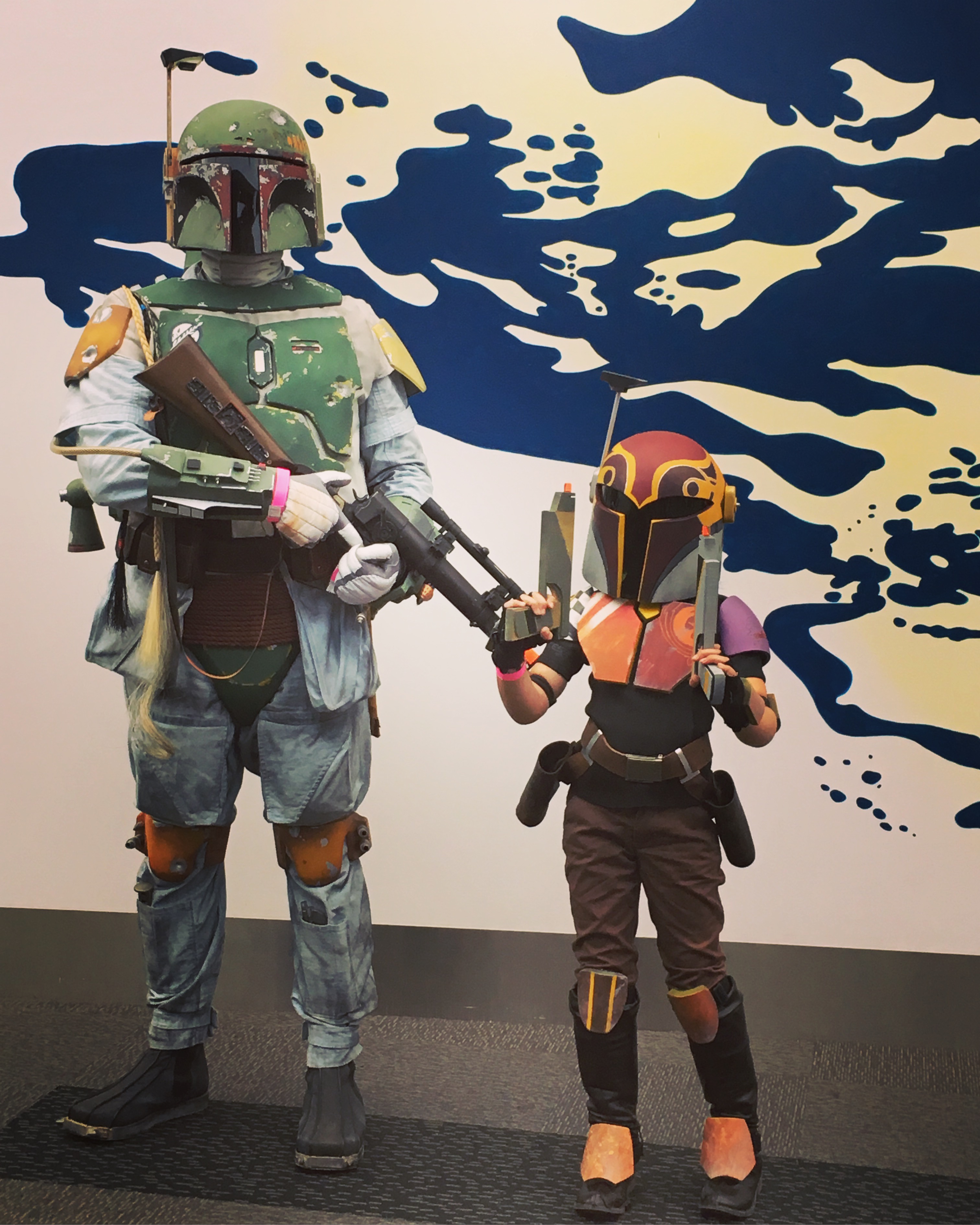 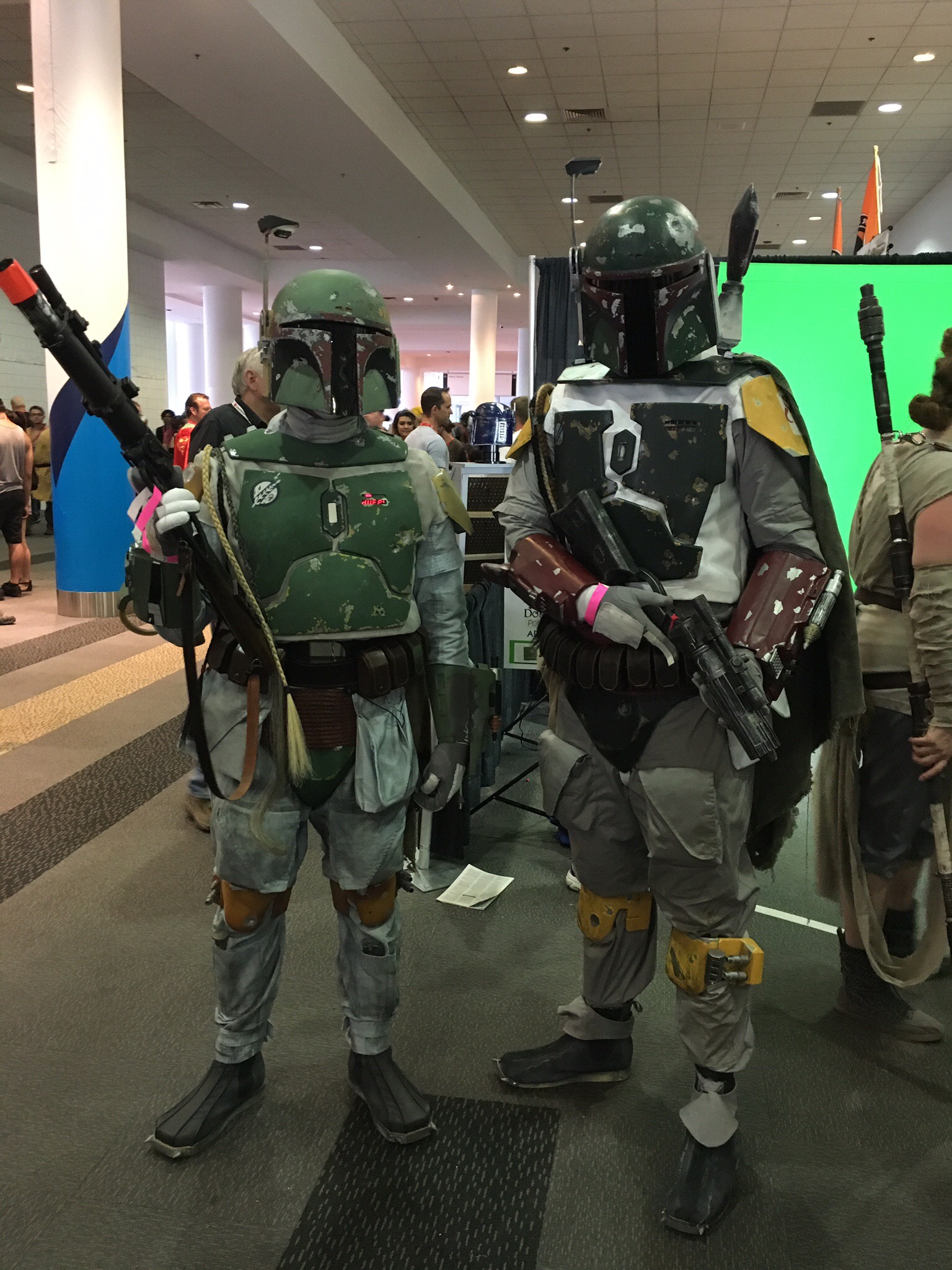 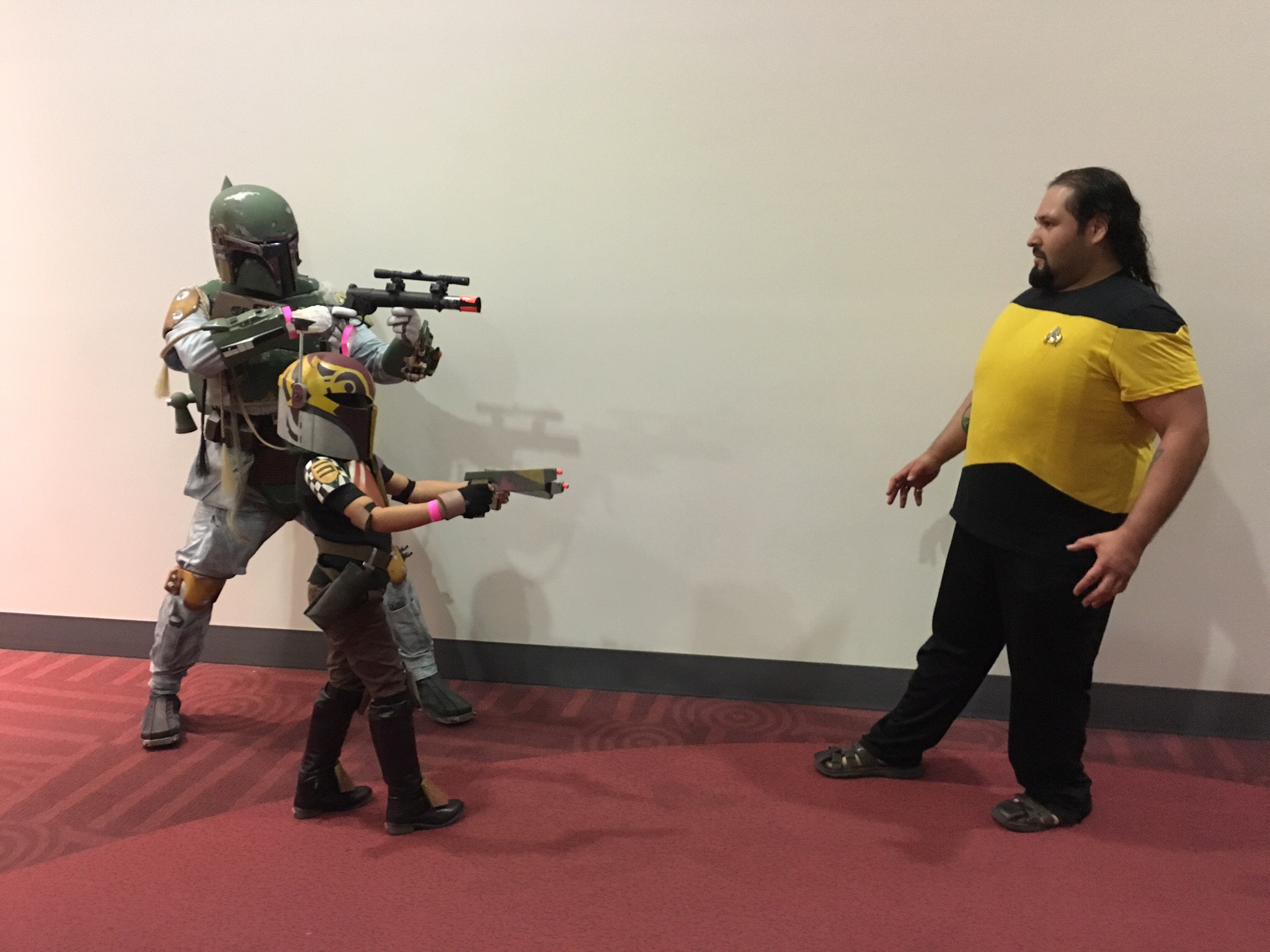 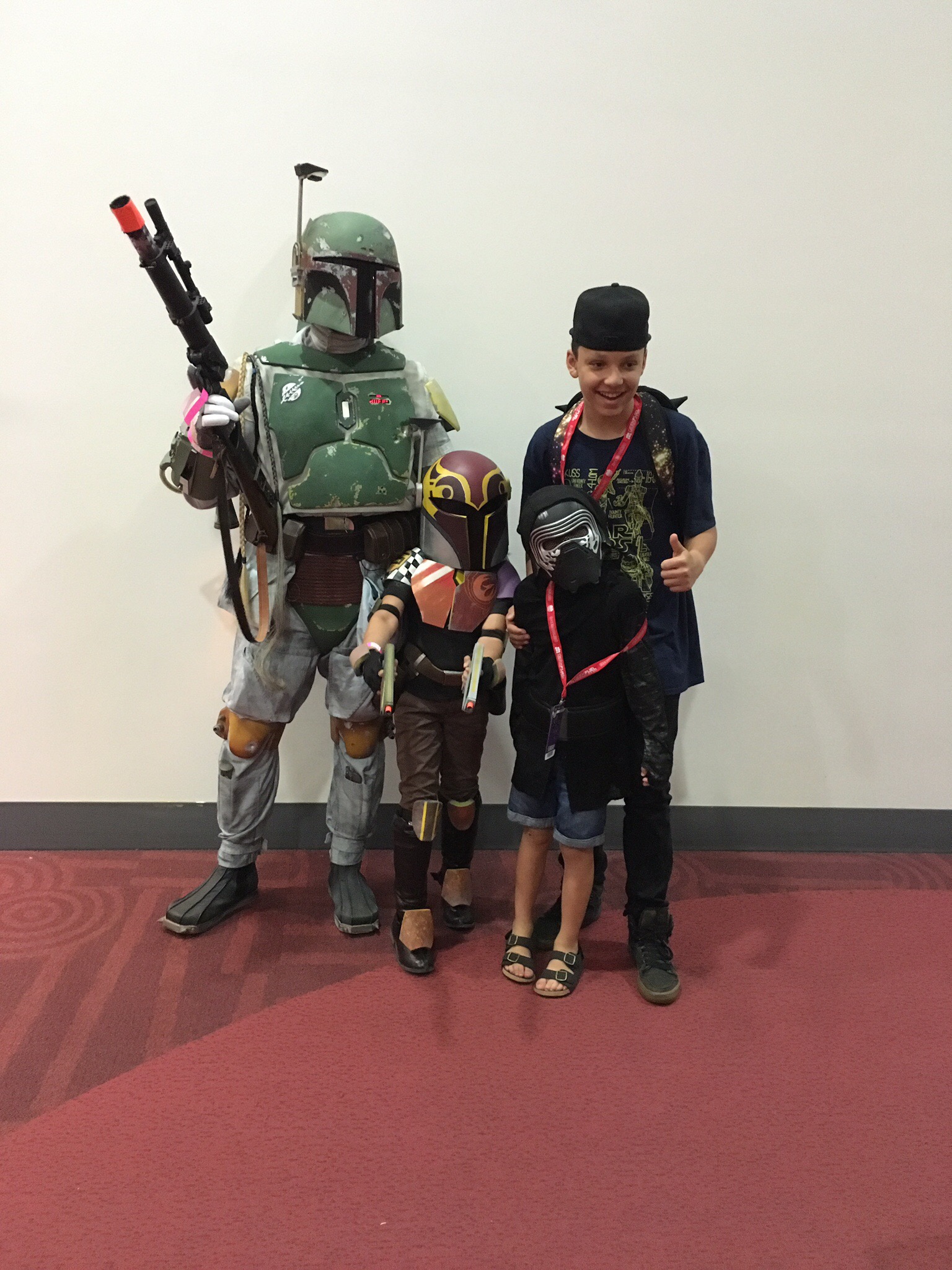 I particularly like your "Tips for a successful Boba Fett", some funny lines in there too!

Congratulations! Always great to see a fett project get to the finish line

Thanks for the hints, and your costume is awesome!

Preferred Vendor
Fantastic read and nice work , the pictures are awesome . I hope I look half as good as you. I am still to test fit my full fett but the day is getting close . 3,items to buy.

Question:
Did your softgoods from arkady come in that color already? For your flak vest, did you go shiny or dull facing out?

I bought pretty much all the same stuff as you, any weathering tips?

Sent from my iPhone

Great write up and your gear looks excellent! Really nice work, and it's very cool you got to share the experience with your daughter. She looks great, too. Some fine "dadding" there.

Urami able to do all that in 90 hours is amazing. I must of spent 100 just on the jet pack alone. Do you have a total bill yet? It gets expensive, that's for sure.
Last edited by a moderator: Jul 8, 2017

Question:
Did your softgoods from arkady come in that color already? For your flak vest, did you go shiny or dull facing out?

I bought pretty much all the same stuff as you, any weathering tips?

The ESB flight-suit from Arkady comes light blue. The flak vest was ordered dull facing out and the neck-seal is shiny facing out. She actually pointed out some history that went back and fourth on guidance over at the 501st on shiny/dull out. She was very helpful. As for weathering, less is more. Utilizing rust-oleium flat black and rust-oleium grill paint I slowly build up the weathering in areas I thought most appropriate. The obvious weathering is in the shins, knees, lower thighs. Here is where we have some artistic free rein with the rest of the suit. Where would dirt collect if you wore this every day? And where too would the that dirt build and both wear off..think elbows. Elbows would get really dirty but would also have a light wear spot in the middle where the bone is highest. Sort of like dry brushing silver onto a black surface to simulate metal wear. I use both types of paint because they dry with a different sheen. I utilized more of the camo black for overall weathering (with the suit fully dressed on my mannequin I lightly spray all (armor, suit, vest, etc) because it would have gotten dirty that way right? Just go really light, and stay about 15 inches away with small sweeping bursts remembering to always keep the nozel clean or you might get some spatter. The grill paint drys with a bit of a sheen to it and I like that because when build up in certain areas it can have a nice greasy look. For a point of natural reference I put on just the flight suit and went outside and sat on the asphalt in my driveway, kneeling on it, lay down etc maintaining natural body movements. I then dusted it off and used the dirt build up as my reference points. My suit at this point is still probably a little light in areas but dirty enough to give more of a grayish/blue as opposed to a blue/grayish.

Malkavian said:
@Urami able to do all that in 90 hours is amazing. I must of spent 100 just on the jet pack alone. Do you have a total bill yet? It gets expensive, that's for sure.
Click to expand...

I tend to ignore that financial part A few times that I did focus on it puts me at about $2500. I saved a bunch by getting that budget armor from Woodman. It was only 300 bucks for shoulders, backplate, knees, chests, collar, ab. Before I did any part I would study videos and build threads and think about it a bunch and really just become one with the idea of of attacking the next phase of the costume. Getting my mind right ya know? As well, I tried to video document each each phase so that took a lot of time too.

I knew I'd see you on here eventually, and man do pictures not do his Fett justice, looks incredible in person. Amazing work and thanks for the awesome picture.

This is some great inspiration to those of us still building with that dream! Great thread!

HAHA Nice!! Thanks for the kind words man.

UOTE=italianfett420;693039] View attachment 100667
I knew I'd see you on here eventually, and man do pictures not do his Fett justice, looks incredible in person. Amazing work and thanks for the awesome picture.[/QUOTE]

Glad I read this. My first troop is tomorrow. Mixed feelings. Nervous. Excited. Paranoid. Going with a group of about 9 people. Leaving my left flamer off for now b/c I'm paranoid it'll get caught on someones shirt.