Id punch asteroids if it was anakin, I don't even see how that could logically be him...

As far as the stylization of the characters. Yes, the animated series is canon in the storyline. The appearances were designed to bring new life to the look of Star Wars and appeal to children. There is a considered difference in animated and non animated characters. The reveal of a character from the animated series does not neccessarily mean that's the character's real world appearance. For example, we all know the story of the prequels and know the animated series falls somewhere between AOTC and ROTS. THe story is a canon continuation of the events. However, are we to believe that Anakin, Obi Wan and the rest transformed from flesh and blood to digital animation and back? No, the story holds true it's just told in a different medium.

That into account, the costume would be accurate if made in real world style armor OR in animated style. Just as we've seen costumers do Rex and the Clones in both styles.

As for no RF, doesn't bother me much at all. My custom didn't have one fo rthe longest time and now that Ive added one, it's NOT traditional Fett style. I don't think every single Mandalorian in the galaxy has to be a matching repaint of Boba and Jango. I love the diversity. It's what attracted me to the Mandalorian Mercs Costuming Club over the others when I started into costuming. It's the opportunity to play out as a Star Wars character a be in universe but, to have your own control over the look of you character.

Although the 4 seen look like Jango with minimum mods, I applaud the creators for stepping outside the box in a few small ways.
N

I'm glad to see mandos finally in CW. I do wish there was a little more color variation. The helmets sans RF is nothing new to costumers, but that is new for Star Wars in general.

Hopefully mandos are gonna get plenty of face time this season. =)
W

:confused Guess I should have watched it with the sound on......oops

stormtrooperguy said:
i wish there was a side view of those new helmets. i'm reaaaaally tempted to paint one up based on that dude in the center
Click to expand...

Just wait. I have a surprise coming up in about a week.

YAY!!! your surprises are always awesome!

Well, thank you! But don't get your hopes too high. It's not that big, but I think it will still be pretty cool.

I'm guessing that there may be some decent images in the Clone Wars Season 2 Visual Guide ?

Well, I said I had a surprise that I was working on. Over the past few weeks, I wanted to try using Home Depot buckets for a helmet. And here it is. (No visor yet, MS Paint did that for me.) 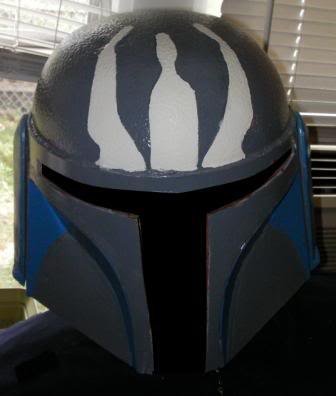 But, take a good look - because this particular helmet is going to be sacrificed soon. I'm going to cut it up to serve as the initial mold for a plaster mold for a run of generic helmets. But, here's my take on the Clone Wars Mando.

I still need to see the series to find out what the back looks like, so that will come later, possibly after I make my kits.

has any one noticed that the conners of the visor are points and not squares. is this just me I'm wanting to make this helmet but I will have to totally redo what I have already done to a helmet it this is so.